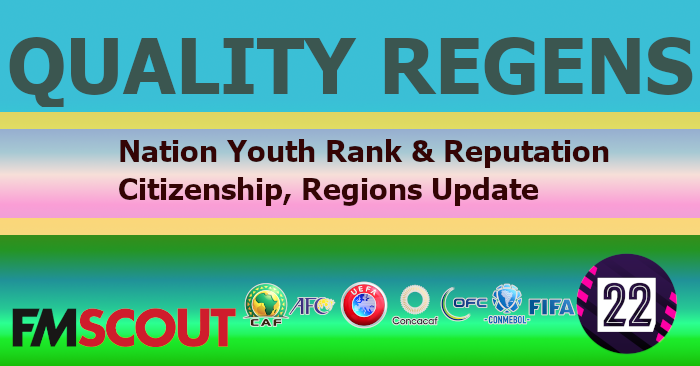 Have you ever wondered how your game will look if you could focus your scouting on Africa or Asia instead of South America? Or even better if you can do it all at the same time? Are you in need to find a new top tier level striker like Lewandowski, Aubameyang, Adebayor, Drogba, or Forlan? Or maybe you are on the hunt for new Shinji Kagawa or Heung-min Son?

With thousands of changes made this is finally possible with Quality Regens Nation Youth Ranking & Reputation database update for Football Manager 2022.

Most important change definitely is update of game importance for nearly all nations included in the game which in pair with changed level of youth reputation should create much nicer and fluid gameplay than it was before. Also you will notice that the gap between top countries like Argentina or Brazil and for example Greece or Thailand was flattened. My main goal was to make 'distance' between best and worst countries much smaller. Those best ones will obviously still generate higher number of great talents but now chances to get quality junior in smaller/less decorated country shouldn't be a problem as well.

This small file won't slow your PC but was carefully made to bring more fun, and joy to all of you who were disappointed with how things worked out in FM22.