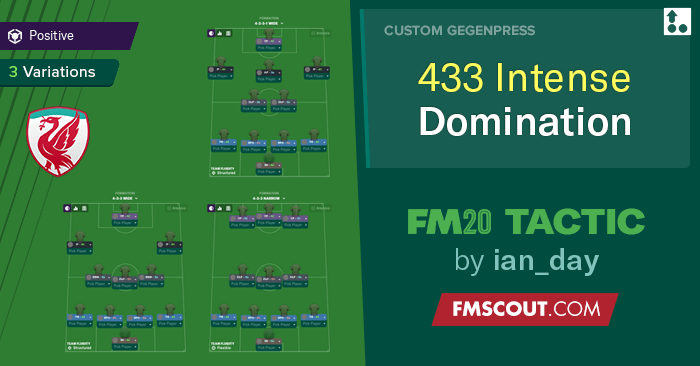 These tactics are what I have been using for 5 seasons as Liverpool.

1st season while I was configuring the formations and understanding the team, scouting and signing young players I lost just 1 league game and won all competitions. Since then I have gone over 133 league games without losing.


These tactics although simple require athletic full back and adaptable players, for example I signed Jude Bellingham in season one, and have retrained him to be the DLP (support) now he dictates the play. It does require training some of the players to play specific roles so do check the players stats and training for the specific position.

The majority of players with weak defensive abilities all get trained in Defensive Positioning, until these for the attacking players exceed 10 they continue to train.

My primary formation is the 4-3-3 Narrow however depending on the opposition I transition to 4-3-3 wide or 4-2-3-1 wide. Most commonly against the top sides I've use a variation of the formations during a game. I've been close to losing a couple of times but the players were able to get back into the game, my heaviest defeats was 3-1 against Man City in the Champions League Qtr finals, in the same season I only conceded 5 league goals.

There have been many games that I have seen my strikers work hard and turn over possession early creating more and more chances. likewise the short passing game seems to promote patience, I've several games where I'm pretty sure each player touched the ball at least twice in a sequence, even the GK before a sudden switch of play or change of tempo suddenly creates a goal scoring opportunity and often a simple finish.

Let me know what you think of them.

I'm trying to adapt them and get formations to work with lower league teams. Any changes that I find improve the chances for lower standards I will let you know.