Jer
9 years
Courage, if you ever need someone to take Joe Swan down, you know who *cough* me *cough*. Great updates.
Login to Quote 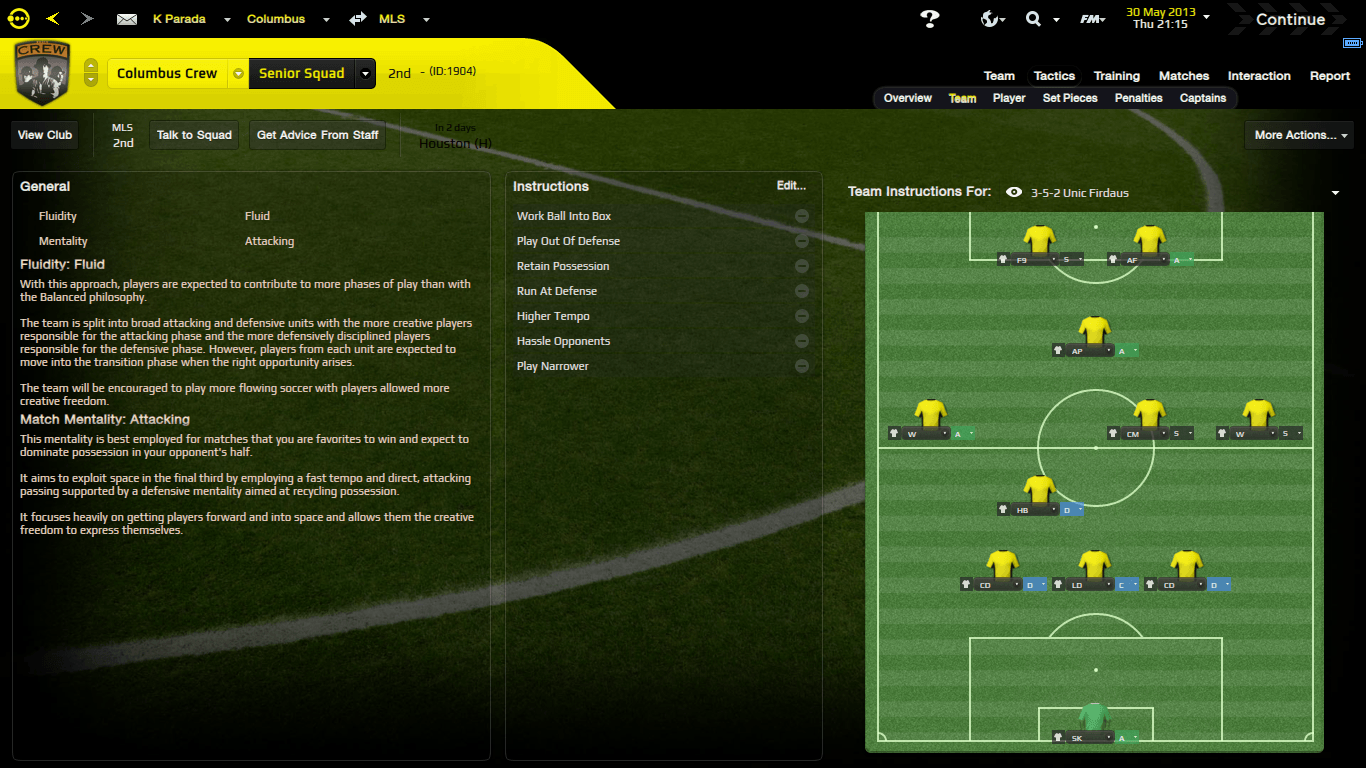 I haven't given you my Tactics so here it is. It's not mine but it is a very good tactic for me.

It shows how Higuain can score, no fullbacks etc.
Login to Quote


It's May and we have matches against 5 teams this month. New York, Colorado,Toronto, New York, and Charleston Battery 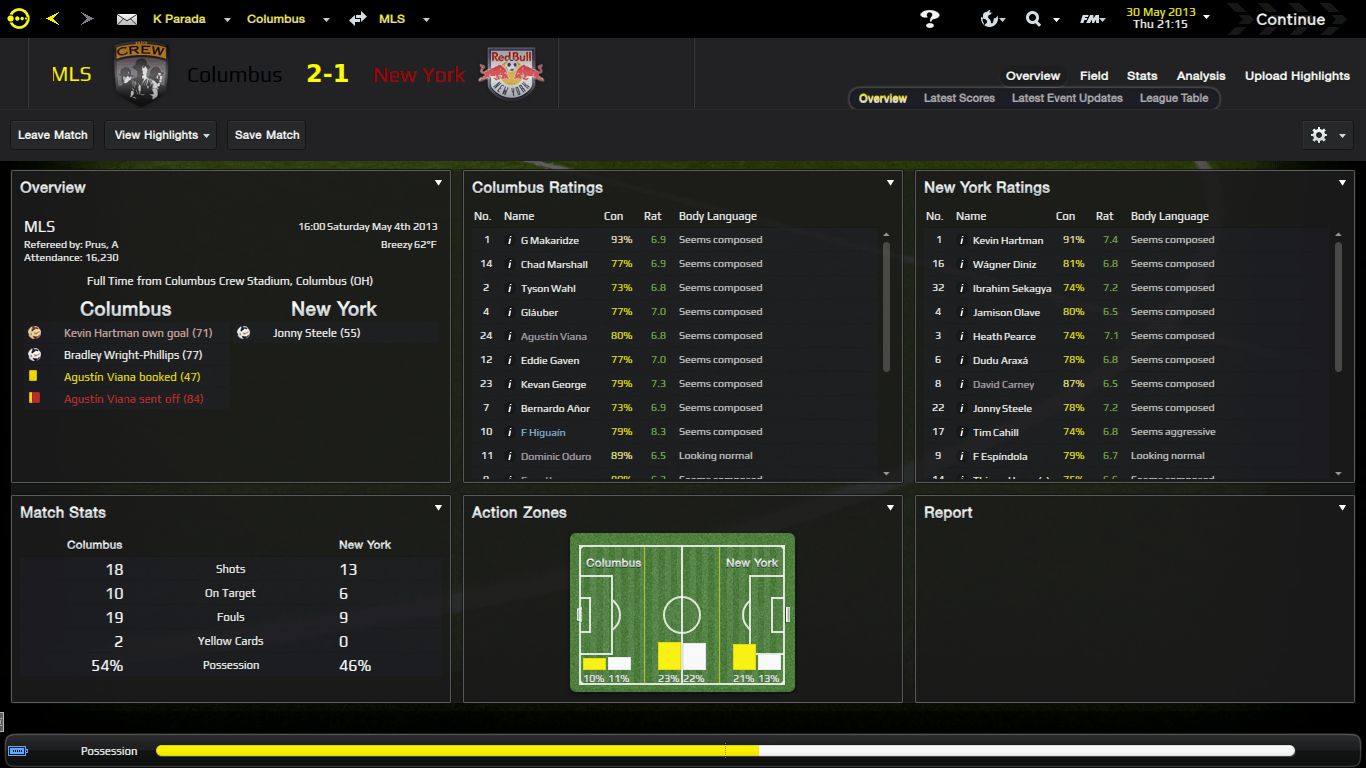 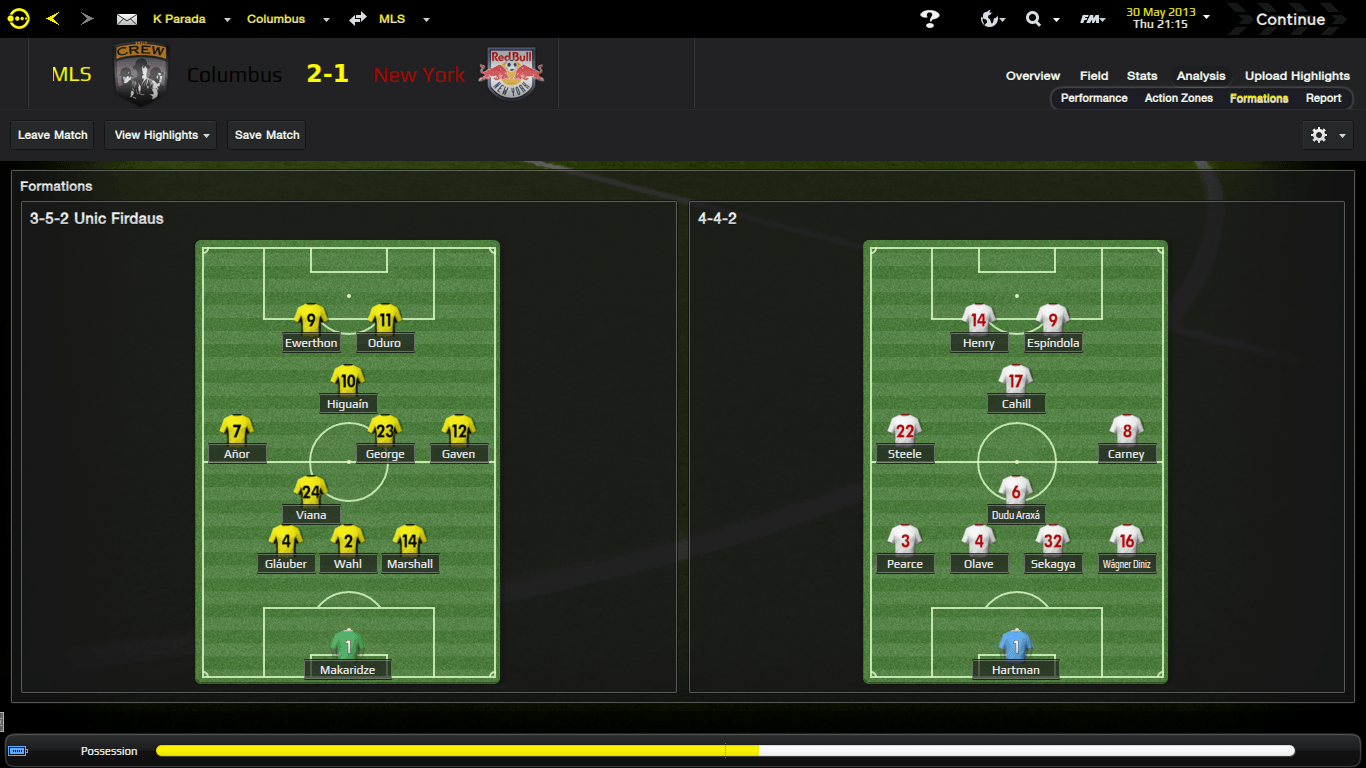 We did good to not let them score after we got a red card, Higuain is just in awesome form this season... BWP just shows NY what they let go today. 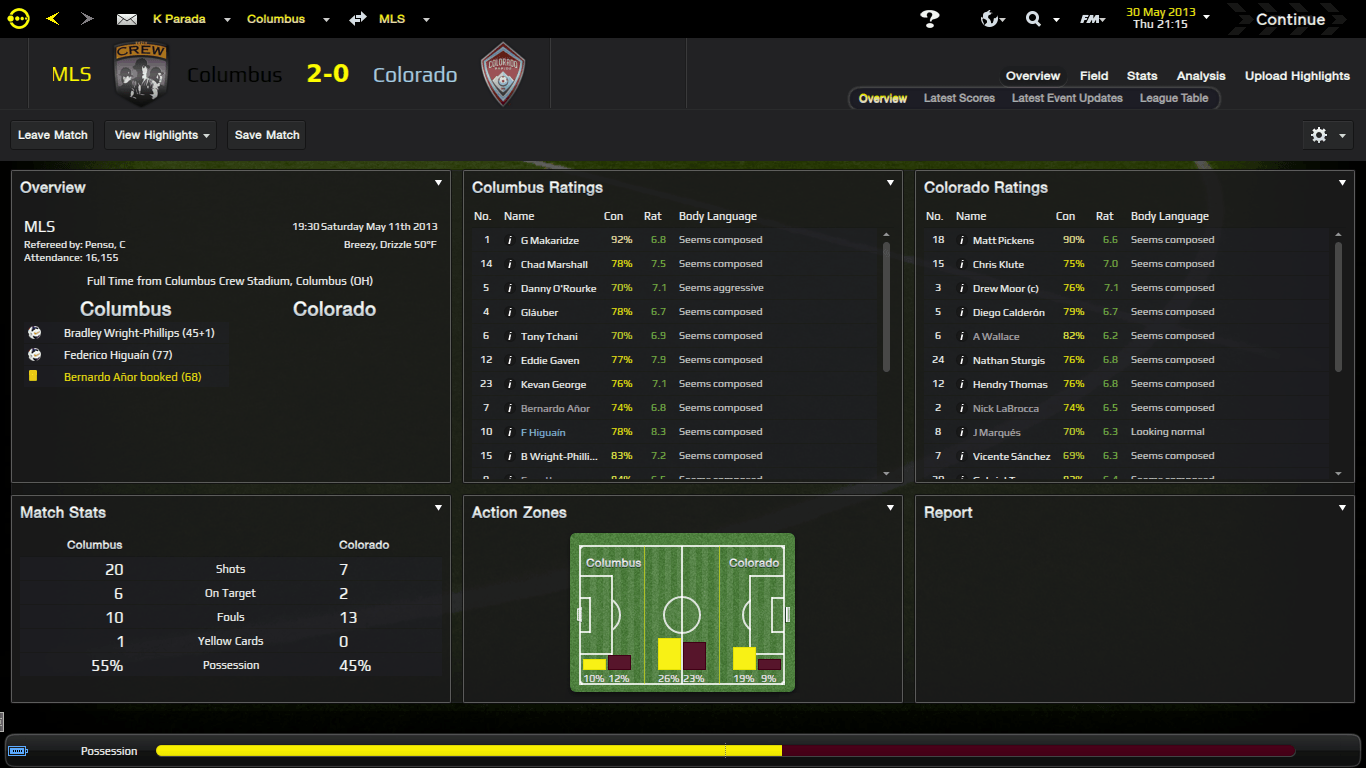 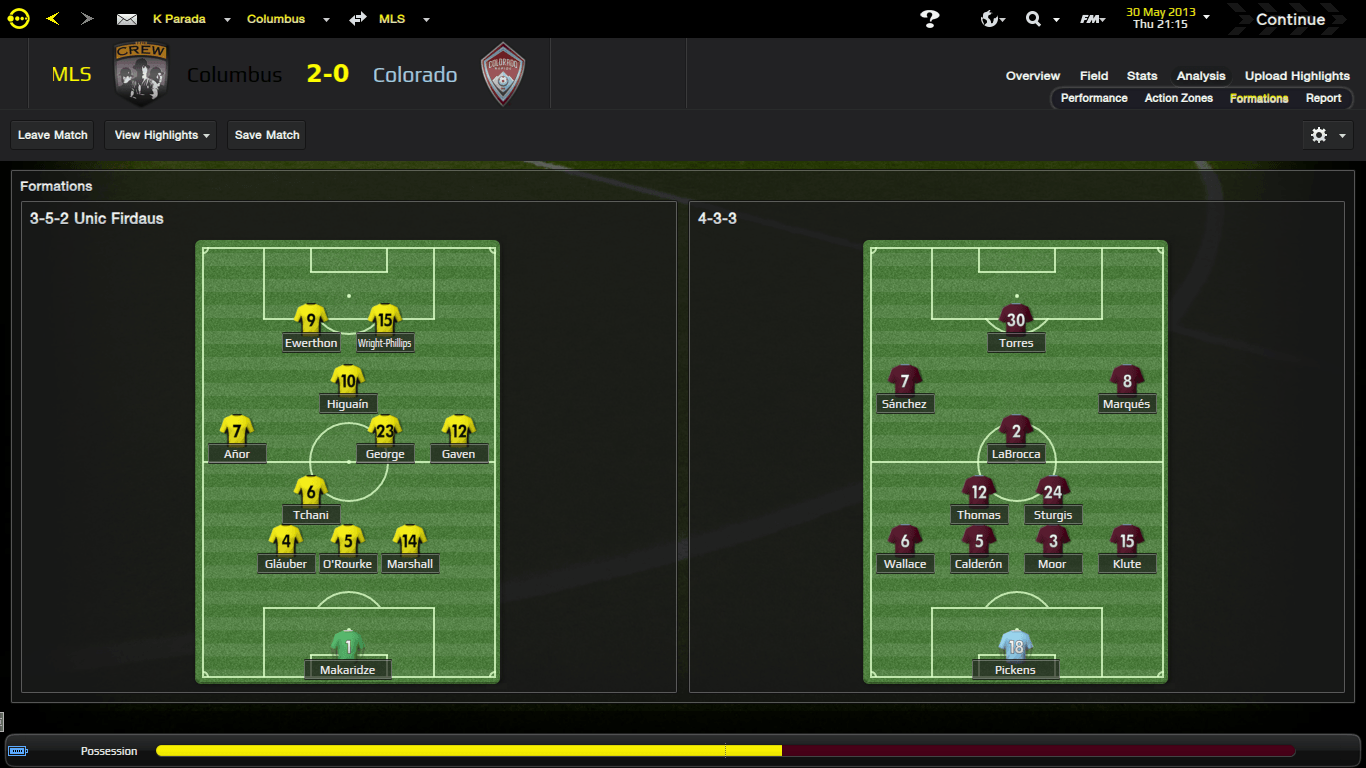 Having a shutout is very good. Having Higuain is good, he does so much in creating chances and goals for us. BWP scores right before the half ends. We had 20 shots but only 6 on target, it's something that needs improvement. It was smart to start BWP.

We won the lottery


In MLS they do a weighted lottery often but when it always happens in other saves I never win, but now Columbus does. A weighted lottery is a lottery for players assigned to MLS. If you win you can't participate in any for the duration of the season. I won this guy. 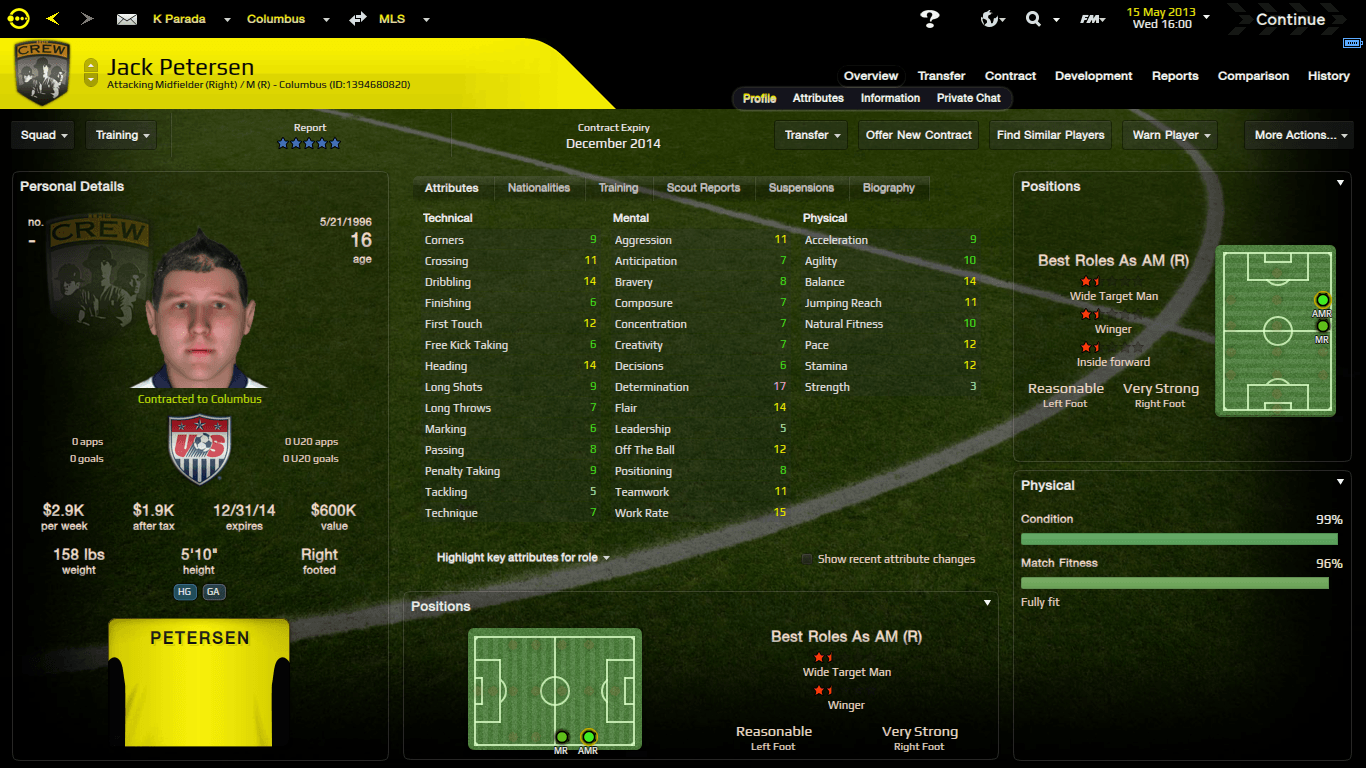 He has 5 star potential. He has good dribbling for his age. He might not look much to you. However to me he is a given chance for backup and help.


This match is the Trillum clash between Toronto FC and Columbus Crew. They are both rivals, both are overachieving in MLS this season. This is what Mr.Parada had said during Pre-match.

Ryan Nelsen is winning a lot of plaudits for what many perceive to be his over achievement with Toronto FC this season, would you agree that he is performing at an unexpectedly high level at the moment?

I really think people are getting carried away. They might be doing well now, but that will stop when we play them tonight and show our power.


Reporter: "It seems he is very confident that he is going to beat Ryan Nelsen's Toronto FC at their home field BMO Field, this is going to be very interesting." 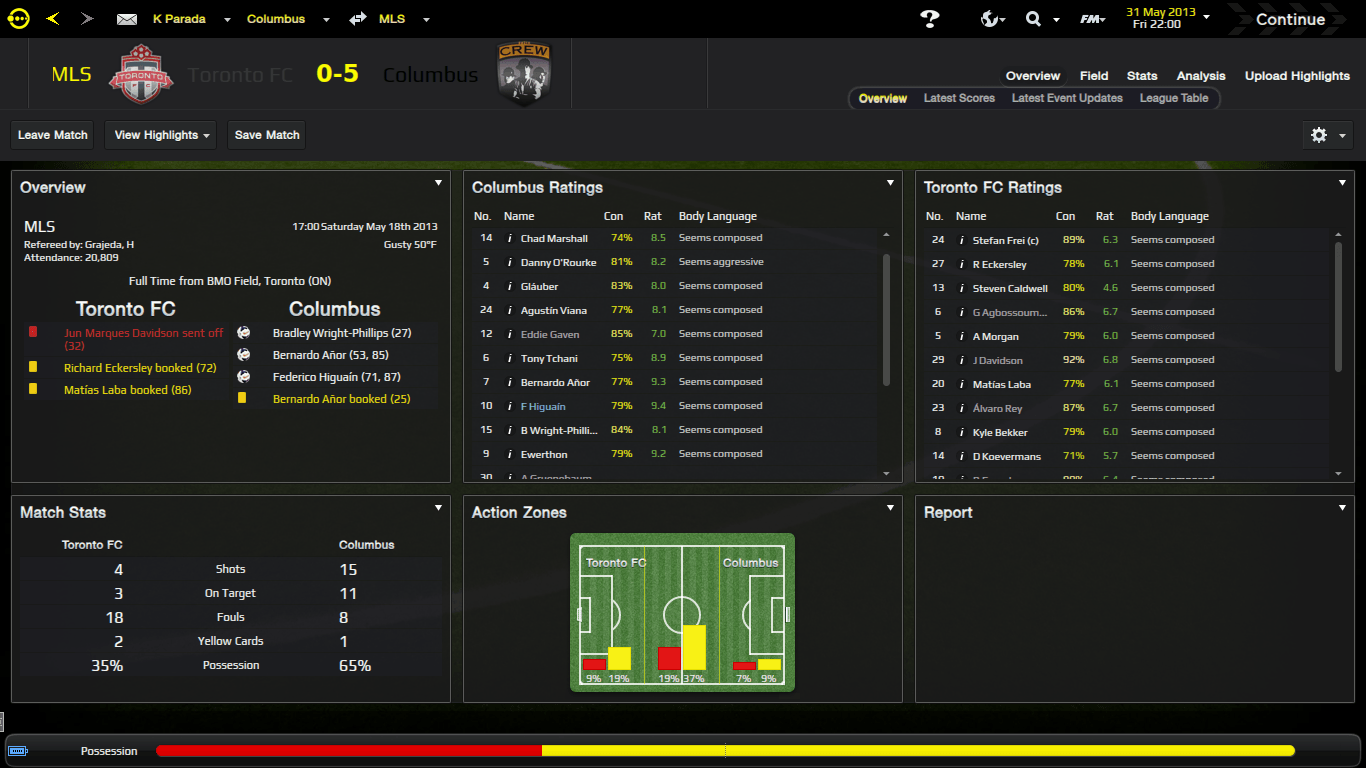 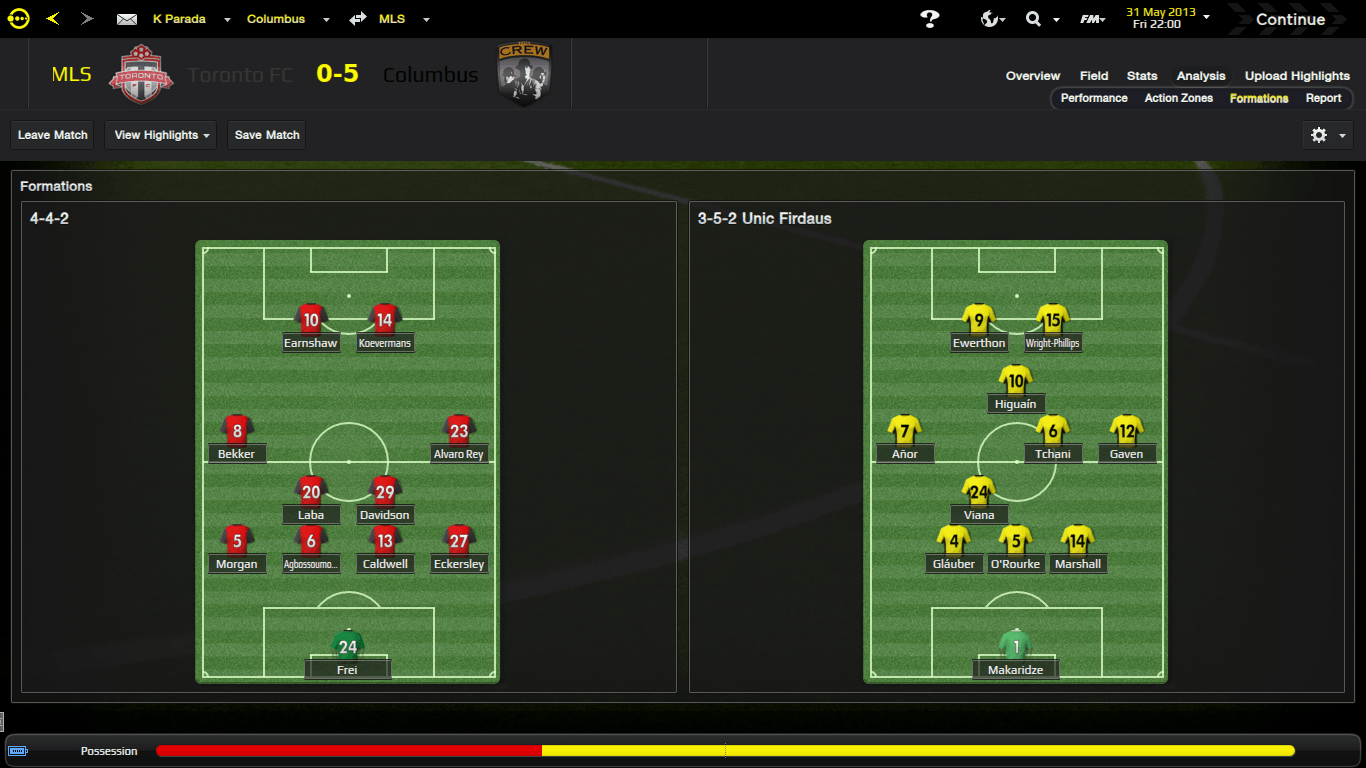 This is what I meant by showing our power. Our players showed determination and our shot/on target ratio was 15:11. Much better then last game. BWP scores once again. Higuain and Anor braces. I gave Jack a run he did decent. I laugh at Toronto. 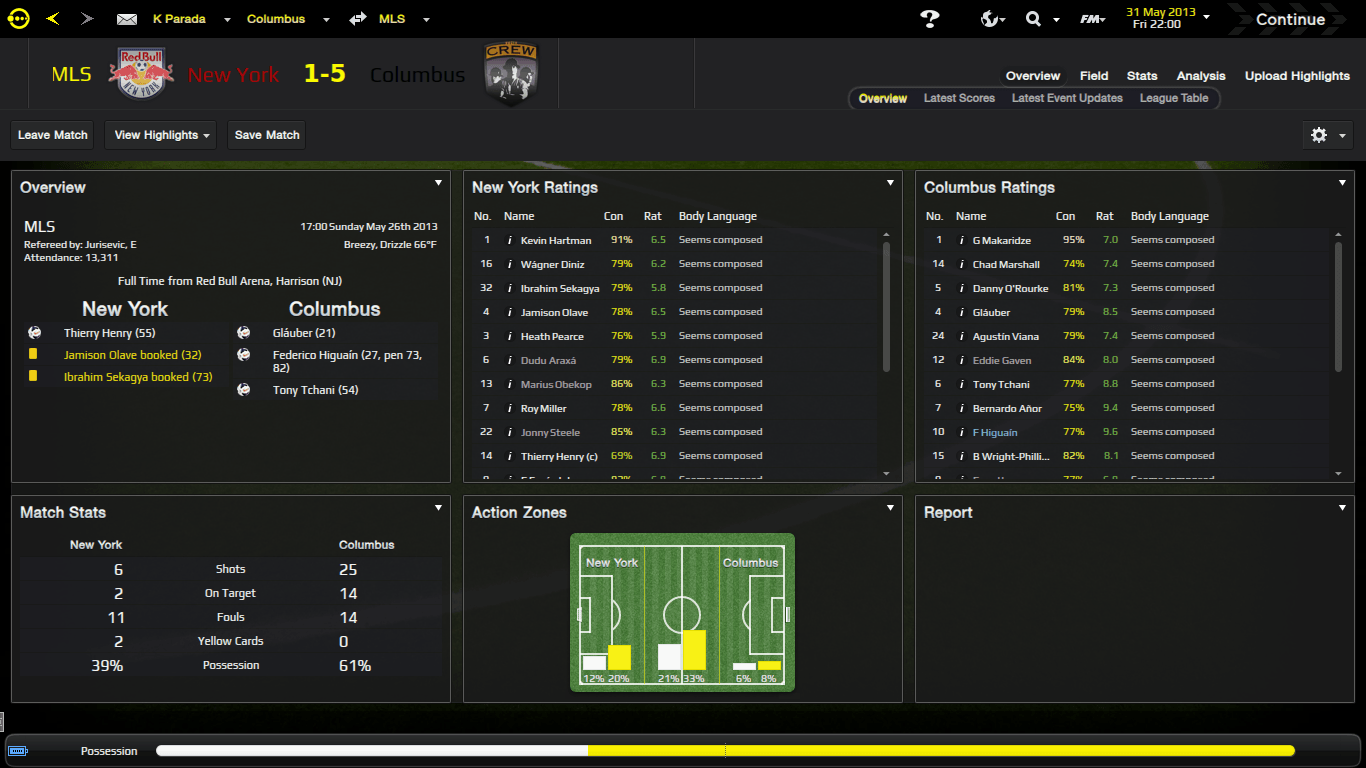 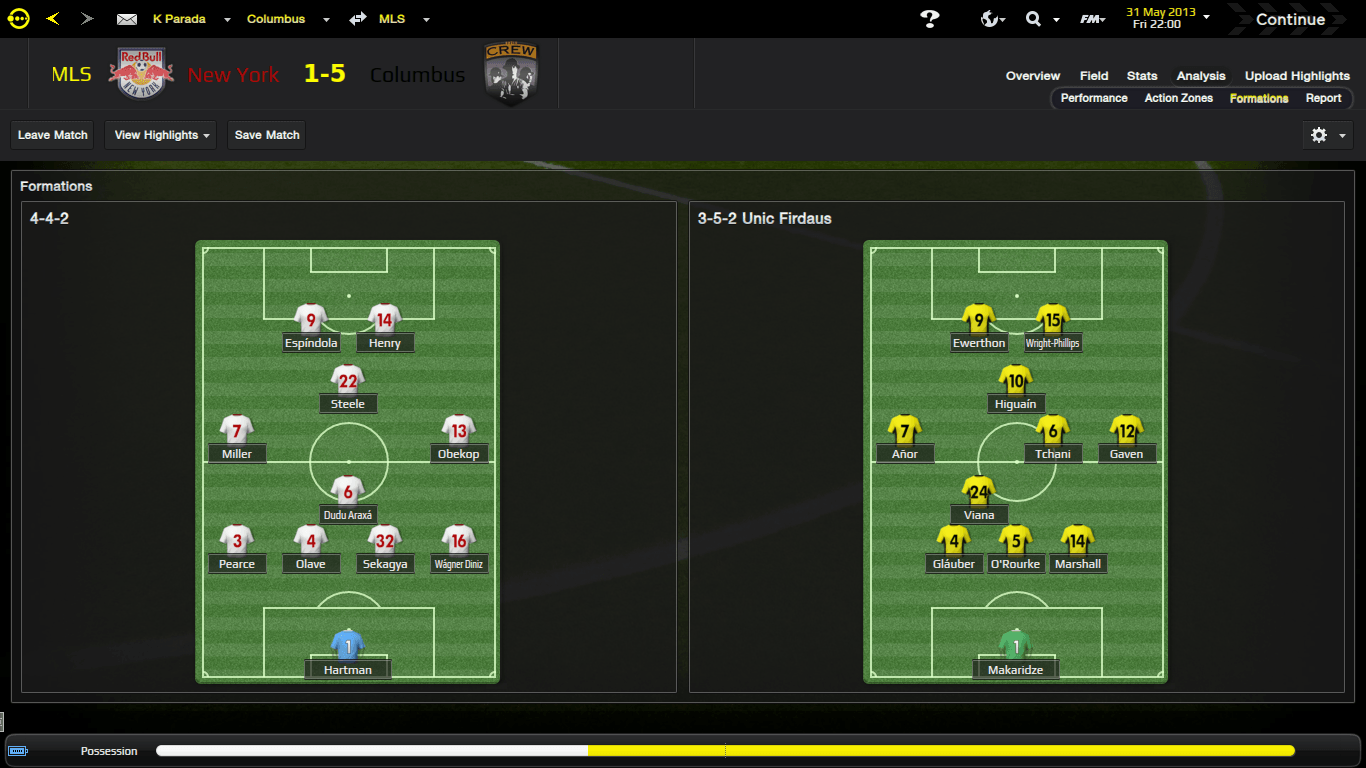 Jesus. Higuain gets a hattrick, we end up scoring 5 goals once again, I love this form. We score on set pieces, Higuain scores from his own chances and others.

That is the end of the MLS matches for this month and here's the league table. 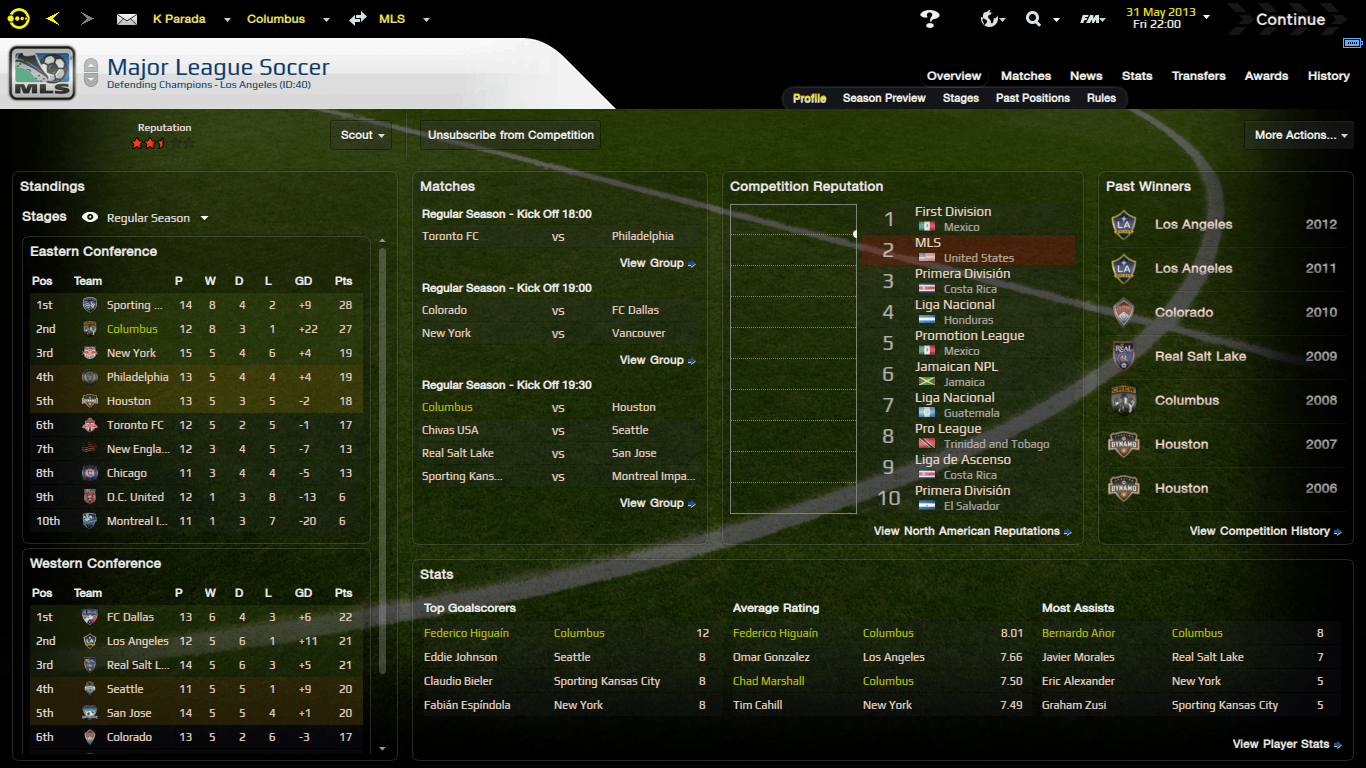 The only reason we are not in 1st is because Kansas have two matches ahead of us. Higuain top goalscorer and rating and Anor top assists. 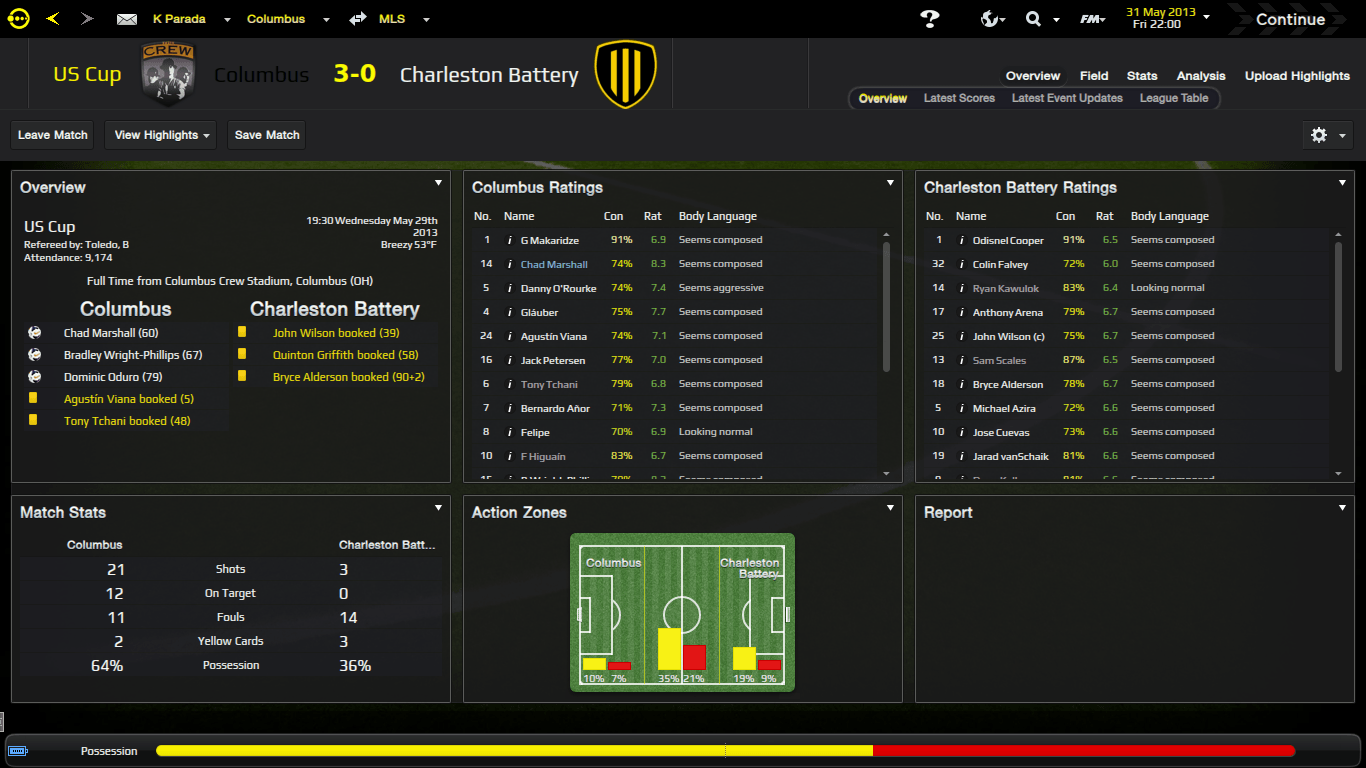 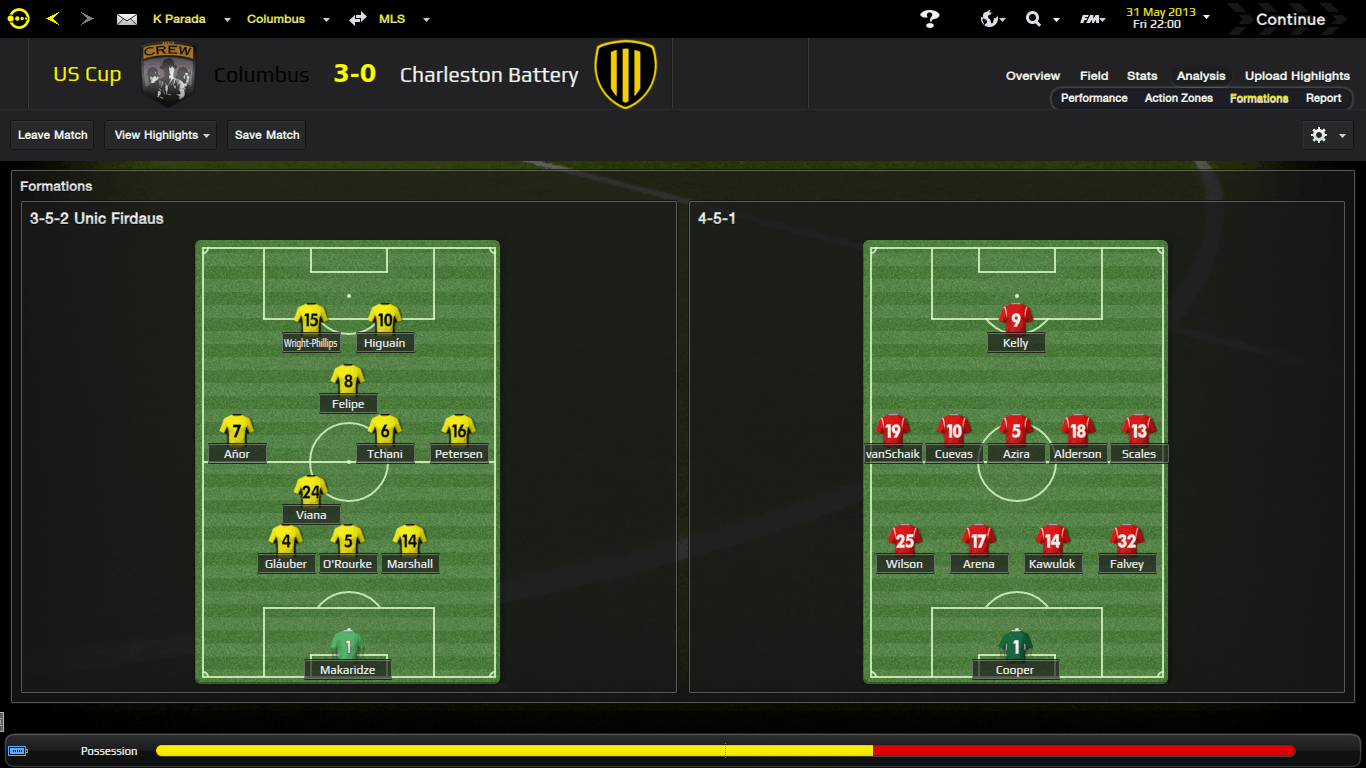 I knew we were winning, so I decided to start Higuain in ST but he didn't do much so I subbed him off and I started Petersen and Felipe. Good win to end the month. 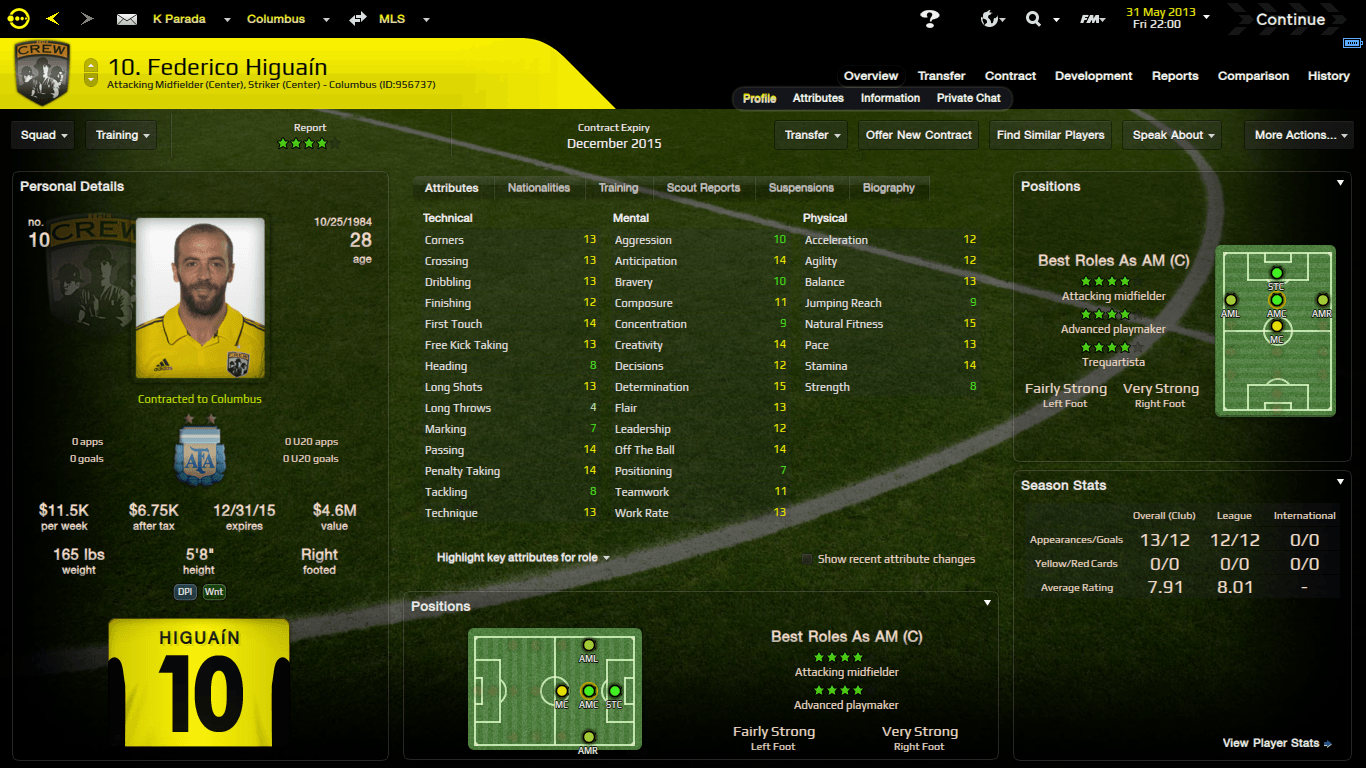 
Next Month is 6 matches, so should I split them up into 2 parts or keep it all in the same? It can be hard to do so many in one update.

What Do You Think Of Jack Petersen?
Login to Quote

shylax
9 years
I like Petersen but you're going to have to put him in the pressure-cooker for a while, and needs to be tutored.
Login to Quote

Seni
9 years
A nice update here Courage, keep it up

Radders2109
9 years
Great last update, keep up the good work. I will following from now on