It was tough, Ramos literally destroyed Walker, he was the reason they played so well! And Stevie G going last I always knew he'd score.
Login to Quote


I know, it was a great achievement! Thanks man!

England to face France in the World Cup Semi Finals England will face France in this year's World Cup Semi Finals as Switzerland also take on Portugal to decide who will be playing in the final.

England fans will be greeted with the news that they will face Euro 2016 hosts France in the World Cup Semi Final to determine who will get a place in the final.

Hodgson's men have been on a remarkable run in the competition, recently besting Colombia in the quarter final through a nerve-racking penalty shoot-out which ended 5-4 in England's favour.
France also beat Belgium 1-0 in the quarter finals to progress to this stage, with Adli Rami getting the winning goal which sent his team to the semi finals.

England have been unbeaten throughout the whole competition and look in fine form to tackle the challenge of France, who will be without FC Bayern's Franck Ribery after he picked up and injury in the game against Belgium.

For England, skipper Steven Gerrard picked up a niggle during training and looks set to be on the bench for the start of the game, which gives a chance to Michael Carrick to perform well for his team.

This will be a highly anticipated game and the bookies cannot separate either team to be a favourite, which shows how tight the game will be.
Login to Quote

InvertedWingbacks
8 years
Tough match there mate, but I reckon youll come out on top: Ribery will be a big miss for the french
Login to Quote

Bantams
8 years
England won on penalties? what..? Am I reading this right?

Fantastic result nonetheless Josh, France is a difficult task but I'm sure the team is more than capable of topping the Frenchies!
Login to Quote

Jer
8 years
I do believe that France top England irl, but FM is FM :P... Good luck, and some nice graphics.. did you do it yer'self :P?
Login to Quote


It'll be tough, that's for sure, but without Ribery it makes their team much weaker. Thanks for the comment!
Login to Quote

Fantastic result nonetheless Josh, France is a difficult task but I'm sure the team is more than capable of topping the Frenchies!


Winning on penalties was amazing, and shocking. Yeah I agree with you, I think we can progress to the final. Thanks for the comment!
Login to Quote


Haha yeah, I agree with your first statement. I did most of the graphics myself except the banners which Nick did. Thanks for the comment!
Login to Quote 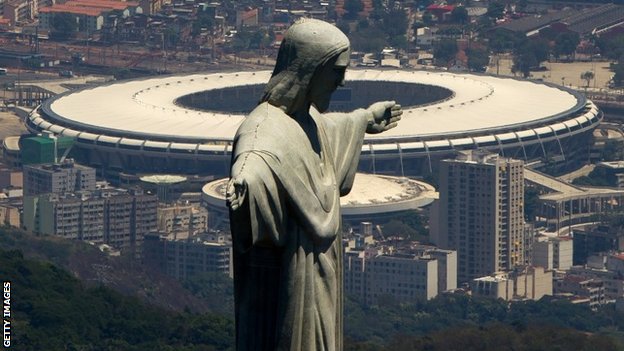 The BBC have secured the rights to show live coverage of the World Cup Semi Finals in which England face France and Portugal face Switzerland.

After fierce competition between ITV and The BBC on who will broadcast the World Cup Semi Final, The BBC have won the rights and will show both matches on live television.
BT Sport also put in a bid to secure the rights to the World Cup but failed because their network was classed as "poor due to the staff involved."

The BBC will have their usual sport presenter Gary Lineker presenting the show and will have numerous guests involved featuring Arsenal winger Theo Walcott who missed out on a place to Brazil, usual pundits Alan Shearer and Alan Hansen and some Premier League managers such as David Moyes and Tony Pulis who could all feature on the show at some point.

The Semi Finals will be played at 9pm GMT and will have approximately around 3 million people watching the England game from their home and will be hoping that England can progress into the final of this years World Cup.
Login to Quote

AS4
8 years
Another nice update!
And a nervy penalty victory against Colombia! Hodgson's men had done themselves proud by beating Colombia and reaching the semi finals where they were going to face possibly their toughest test yet, a French team which have impressed everyone throughout the whole competition.

The good news for England was that Franck Ribery would not be starting after picking up an injury in the quarter finals and without him being in the French team it made them look weaker which could possibly give England the best chance to progress but the late injury news was that the in-form Wayne Rooney was to miss this game after picking up a knock in the pre-match warm-up.

Wayne Rooney and Steven Gerrard were the two England absentees and were replaced with Phil Jones and Danny Welbeck. Hodgson also gave starts to Liverpool's Raheem Sterling and Cardiff's Steven Caulker to freshen up his defence.

The referee blew his whistle and France kicked off which made a huge roar from both the England and French fans around the stadium. Matuidi and Payet were getting familiar with the pitch and played the ball around the back for the opening couple of minutes before trying to drive forward but got stopped by Phil Jones in the England midfield.

England gained possession and played the ball forward, with Jordan Henderson, who has impressed in midfield throughout the competition found his team mate Sterling on the right, who drove forward against Abidal and reached the byline, he played a delightful cross towards the near post where Manchester United's Danny Welbeck got ahead of Umtiti and headed the ball past Lloris at his near post.

That was Welbeck's first goal in the whole of the competition and he showed his emotion by running over to his team mates who celebrated with him, it was a huge goal for both Danny Welbeck and England which looked set to carve out how the game will be for the rest of the game.

France kicked off again and tried to make something happen with Loic Remy coming deep and collected the ball of Matuidi, Remy them picked out Tremoulinas who did some good work of on the right against Baines and played it back towards Remy, who played a perfectly weighted ball towards Giroud but the Arsenal forward couldn't get there due to his lack of pace and Joe Hart collected the ball comfortably.

England then put the pressure on France as Sturridge gained the ball and played it to the feet of Danny Welbeck, who danced past a couple of challenges and gave it back to Sturridge, who saw the run of Sterling and played it towards him, but the young winger couldn't sort out his feet and the ball hit the side netting but that attack showed that England can punish France if they get caught out at the back. Direct: Raheem Sterling(above) put in the most crosses out of the whole of the England team against France, 12.

The half continued similar to the start as France continued to chase the game and against came close as Payet picked out Remy, who was given half a yard to turn and get his shot away, which deflected off England's stand in skipper Gary Cahill but Joe Hart was able to tip the ball behind for a French corner.

Payet took the corner and found Varane in the middle, but the young Real Madrid defender couldn't get his header on target as the ball dipped over the bar and the referee blew his whistle to end the first half with England leading 1-0.

The players came out for the second half with Tremoulinas coming off for Pogba and Giroud coming off for Benzema which showed France's attacking intent for the second half.
England restarted the game and played a few passes around the back but you could clearly see how France's tactics had changed as more players started to press the England defence but they didn't feel the pressure as Cahill calmly passed the ball out to Carrick.

England started to show their dominance as Carrick was running the show in midfield, putting together a string of passes which almost lead to a goal as Sturridge beat his man and he shot was smartly saved by Tottenham's Hugo Lloris who was able the get down low to his far post and gather the ball to relieve the pressure on France.

France tried another route by playing the ball in the air but Cardiff's Steven Caulker, who got a surprise start ahead of Jagielka, was able to win all of the battles in the air and keep France out on numerous occasions, however Remy had a great chance but Everton's Leighton Baines was able to put in another exceptional block to keep England's lead in tack. Saviour: Leighton Baines(above) made 3 important blocks which could have lead to France scoring on numerous occassions.

The clock kept ticking and France could not find a way through, there was at least 3 added minutes and France piled all of their players into the box and Hugo Lloris kept punting up long balls into the box which made it a nervy few minutes for England, however Gary Cahill cleared the ball out of the box to waste more time.

Lloris played the ball into the box for one final time before the game finished and Remy connected with the header but Danny Welbeck got in the way of the header which allowed Caulker to clear the ball, in which the referee blew his whistle for full time to send England through into the finals of the World Cup!

"I can't quite believe it, it hasn't settled in right now that we've made it into the final of the World Cup. You can't fault the players at all today as they put in an exceptional performance which I am proud of, the fans are proud of and most importantly, they should be proud of. France troubled us many times but we were able to hold them off and get through into the final."

"Danny's goal was very good, he got in front of his man and was able to put enough power on the ball to head it in at the near post. I am very proud of Danny for scoring that goal and I hope it gives him much needed confidence to improve as a player."

AS4
8 years
Excellent update mate!
CONGRATS ON GOING TO THE FINALS!
YESS!
Just one more step!
Keep it up

EdenHazard17
8 years
AMAZING! That's all I can say
1 step away