Hello and Welcome to my first FM14 story. After get promotion to barclays premier league and runner-up in championship last season. I really happy to stay here and make this team bigger than before. To be a runner up in championship last season is like miracle to me, with just really minim transfer budget I can handle the pressure of it and now with just two games left and nine games being fucked (L7 D3), my team have spirit to stay in premier league and fight to not being relegated.

I have long-term project in this club, change philo and rebuilding team with passionately, having slot in european league and winning local cup. And about get premier league titles & slot in champions league, that sure is a long journey for me. I hope it will be realize around 3 - 4 next season. Enjoy this simple stories :)

Neal
7 years
Up the Terriers! Good luck on your first story!

Vega boys ended their 14/15 season in 12th position with result 15W 5D 18L following beat Man United in their last games. Fans happy with team and they manager who put good spirit to survival in the premier league.

Adriana Vega, Huddersfield boss
This is what I am looking for this season, survive in this league. As a promotion club, this is good result to stay and I happy with team spirit.

Paul Ince son has won the Denis Law Award (Huddersfield Town Player of The Year). The 23-yo put some good perfomance this year, setting up 14 goals in 43 games.
Oliver Norwood came in just behind Tom Ince in second place with Paul Dixon rounding off the top three.

kernel
7 years
@Neal : Thanks mate, this team will be up yes.

Kevin Doyle, Huddersfied chairman
We are focused on strengthening the squad. This team will rebuild to get hard battle for next season.
We will sell some. We wouldn't look to churn a huge number but equally, we are not afraid of moving in the market in a way we haven't seen in previous years.

Adam Clayton, Calum Woods, Jon Stead, Stuart Parnaby is all of the players who rise this club to promotion and set to join scottish premiership next season and thats mean this club will lose 4 first team players.

The Terriers travel to training camp in USA

It's has been 3 days, after we arrive here. Training camp is all about build-up to pre-season match and premier league campaign. We already have football league fixtures and have confirmed eight friendlies, vs San Antonio Scorpions July 19, Everton on 22, Rochedale on 25, Chelsea on 28, Arsenal on 30 and Shakhtar Donestk, Sporting Lisbon also St.Johnstone already confirmed in early august.

And we hope we can bring good result in our 1st match at Stamford Bridge. I already planning this pre-season for while, because it's crucial phase, explained Vega.

Having a change of environment during pre-season can also be useful, and setting up a training camp also helps with team bonding, particularly when you have new players on board, as we will do. That word ‘training’ is important, though. Pre-season is all about being right for the first competitive games, and there is plenty of work to be done. It certainly won’t be a holiday.
Login to Quote 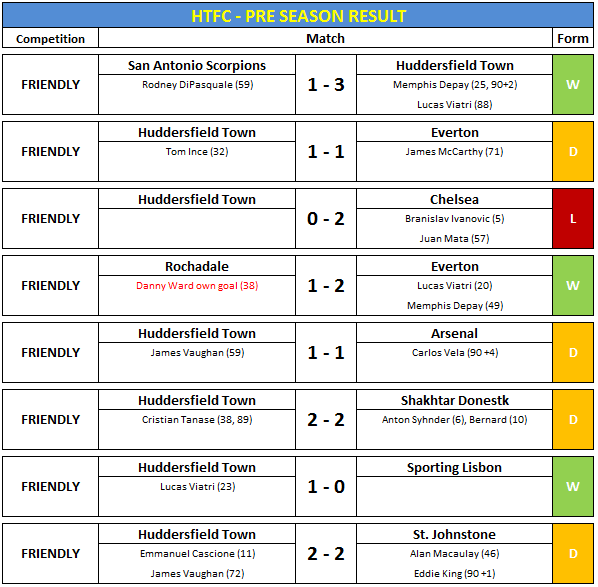 
The terriers announced sign in expert youth guru Tony Carr after 40 years using his talent to produce young talent in West Ham and I hope he can share his determination, mental with youngster in here. Said Vega.

I was planned this moment 2 years ago, after I joined here. To working with Tony Carr is a right choice, he has a lot of experience. With the high star youth training facilities, I believe he can produce a lot of great talent from here.

Finally, after 9 first team moving to they new club, Huddersfield Town now announced eight new faces in their first team squad. Will Hughes is the first to join The Terriers, the Ginger Prince Jr set to join Huddersfield after dealing fee £4.5M from Derby County. Will Hughes is a player that uses his intelligence as his biggest asset on the pitch and even at a young age can dictate a game with experienced professionals on the pitch, like they are his puppets. The player has incredible vision, and at times it seems like he could thread a ball through an eye of a needle, blindfolded. For now, the player is going down the path similar to Paul Scholes with the added bonus of putting in a good tackle, and should carry on following in his footsteps.

The second is Experience goalkeeper, Diego Alves. Vega sign him for free, after Valencia not to extend his contract. Command of area of himself can lead back four to stay focus and concentration. Vega has already plan for some wonderkid goalkeeper, but he wont be rush to get after the right time has come.

Robbie Brady, the left player join huddersfield with fee £4.2M on three-years deal. Robbie has impressed at Hull last season, but he wont stay at club after relegated to the championship. "I want to play in the premier league" "I am good with Steve, our relationship is fine" explained Robbie after rumours coming he's conclict with his head coach Steve Bruce.

Come from Liverpool for £3M on 2 years-deal contract, Jon Flanagan set to be a fourth new faces in Huddersfield. He will get the big challenge in huddersfield, there is Tom Hateley have good pre-season on his position but Vega believe the good one will be primary on the right fullback, so there's will be a big competition on his position.

Vega knows his talent, watch him over the years impressed at Lyon while loaned and scoring 4 assist 5 in the 20 games, thats good perform on his age. The Dutch Ghanaian join huddersfield from PSV Eindhoven with £8M on three-years deal contract make him to be a fifth new faces in huddersfield. A lot of fans has waiting for his debut at huddersfield and believe he's be a good quality sign this year.

Huddersfiled now completed signing 28-yo belgian defender Timothy Derijck for free from PSV Eindhoven on a 2-years deal contract. I’m very excited to come to a club like Huddersfield; it is a big club and I didn’t need to think twice about joining Huddersfield”, said Derijck.

Here's the seventh new faces who join Huddersfield this season, South African lads called Andrew Surman. Huddersfield completed to signing him from Leicester City with £2.9M on 2-years deal contract. Andrew Surman is a talented player that is certainly capable of performing in the Premier League. said Vega. And the last player to join The Terriers is Cristian Tanase. Steau Bucuresti versatile midfielder complete his signing after deal £3.5M for 3-years contract. He's complete midfielder, who can play anywhere in midfield. His bravery, determination can lead this team to get the vision. explained Vega.
Login to Quote 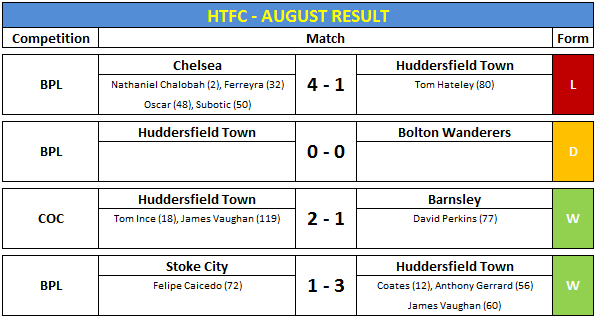 Gerrad said : We have delighted, vega sign player like casteels. He'll be good sign this season and looking forward for his progress at this club.
Login to Quote 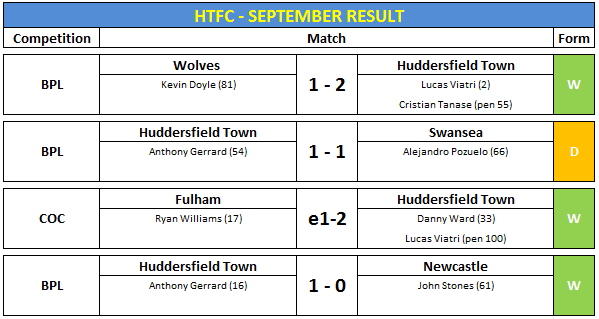 Huddersfield Town playmaker Oliver "Ollie" Norwood is a most influential player this season. His quality has been showed in the last three season. Ollie reach his 100th league appearances after give one assist versus West Brom yesterday. and Vega praised he'll be important player in hudddersfield town during his improved perfomance time by time.

Nearly 50 percent goals had assist from him it shows you the influence he has. It is also a great pointer to what he is. Nobody has doubt it, in the last season he made 30 apps and give 15 assists.
Login to Quote