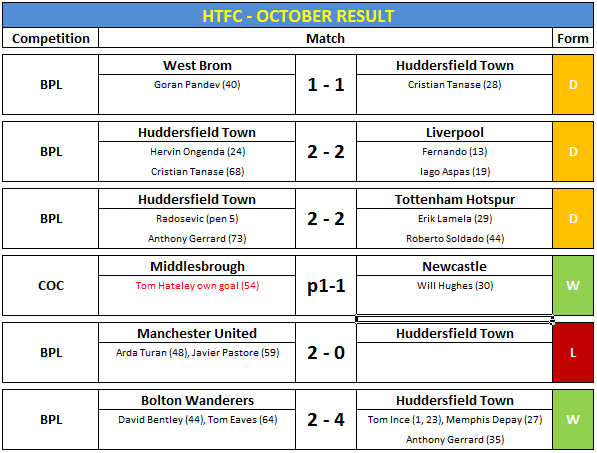 Capital One Cup : The Terriers beat Middlesbrough in dramatic shootout

After M'boro equalize by Tom Hateley owngoal. The manager shout at Captain "Show me something" said Smithies. Terriers put high pressure with 64% possesion in the last 20minutes and Mboro stay focus and calm to launch counter attack.

Tom Ince is the first man to take the penalty and missed. The problem Mboro was that McGoldrik put the ball past Smithies and Gunning make it worse when Smithies saved from Gunning when he
need to score to keep Mboro in it. It was an epic finale before Huddersfield sealed their place to the quarter finals.

For Huddersfield, those moments ended with delirious scenes among their 9,000-strong following. Vega may not have the most refined side but they gave everything and had a centre-half, Sebastian Coastes, rolling back the years. It was a victory for spirit and togetherness. There was something remarkable, nonetheless, about what happened to let them back into the game.

Alex Smithies, Huddersfield goalkeeper
The shoot-out went on for ever, and I didn’t enjoy it until the last kick. I thought, ‘If I don’t save one soon, I’m going to have to take one’, so God knows what the manager would have been thinking when he saw his keeper coming forward when my turn came.
Login to Quote

kernel
7 years
@Josh : Thank you mate, that graphics is simply from excel

Uruguay World Cup star Ramirez has struggled to adapt to life in the Premier League since joining Saints from Bologna in a then club record £12m deal in the summer of 2012.

The midfielder, 23, who could replace Danny Ward/Adam Hammil at the John Stadium, has made only 17 Premier League appearances last season, scoring one goal.

Ramirez’s agent Pablo Betancourt said: “It would be a weighty inheritance to replace Danny or Adam, but an honour for Gaston. How could you say no to Huddersfield, the promotion club who give best result in their last 2 season."

It would be an important opportunity for him. We are trying to understand which team can make the right offer to Saints. Has it been a season to forget? Absolutely yes. He hardly ever plays, yet two summers ago the club made an important investment to buy him.

“Today you cannot say he’s important for Southampton, seeing as he always starts from the bench.”
Login to Quote

Jamesg237
7 years
Ramirez will be a great signing for your club. Well done on the cup win, it is great to see a trophy in the cabinet at the mighty Town!
Login to Quote

Jer
7 years
Ramirez could be a fantastic playmaker, or a great winger along with Ince, keep it up

Arda Turan gave the hosts the lead in 48th minutes before Javier Pastore make it two in 59th minutes. Huddersfield Town could have conceded more if without the great defend by Jon Flanagan and superb saves from experience goalkeeper Diego Alves.

The defeat Huddersfield this season put them into 9th and be the second defeat this season.

"We playing well in the first half, but some mistake in the second half let them make a double." said Captain
Login to Quote

kernel
7 years • Edited
James : To see the trophy in the cabinet is my goals, but I am not winning the cup yet, just get spot at semis now.

Bebero : They got red card in their last 4 mins. Put 2 strikers on and squeaky boomba time. You know, I really happy when I saw +5 added times.

Pauker : I am starting to stress to see my poor finishing, striker is out perform also centre back. I think, that's the problem I wanna fix for the next season.

Jusctice : Thanks mate.
Login to Quote