Justice
8 years
pompeyblue, Rablador, Walter & AaronHJFT96, the reasons I hammered them away after losing to them at home are quite simple.

Firstly, I played a much weaker team in the first game than in the second game.

After I lost, I literally spent hours looking at why I lost, replaying the game (Extended highlights) over and over again. I studied how Exeter set up and moved in attacking play, and how they set up defensively. I looked for areas which I could exploit, and areas I needed to protect.

My research was successful, as we found out when we demolished them 8-0. What I noticed was that Exeter's whole line moves way too far forward when they attack, over-committing players to attempt to score. Their wide midfielders joined their strikers, their full backs pushed up, there were massive gaps between their midfield players and their two centre backs, who were playing well in to our half on the attack. However, they were very wasteful with the ball. Their players weren't intelligent enough and 90% of the time, they couldn't create a chance out of their attacks, despite beating us 2-0.

So my plan for the second game was simple. I wanted to utilise a very deep line, counter attack with pace and hopefully punish them on the break. It was something similar to José Mourinho's recent tactical approach to the big games. As soon as we got our first goal on the break, they kept attacking and pushing everybody forward, and at a much greater urgency too. This meant more spaces for us to exploit on the counter, which we did. By the time half-time came, we were well in front, thanks to excellent preparation and brilliant performances from my attackers. The second half was as easy as you like. The Exeter players had no motivation, and didn't concentrate as they should have. We easily cut them open and scored a few more.

So at the end of the day, the reason I came from losing 2-0 to Exeter at home in one game to hammering them in the next was due to analysis, research and preparation. These three things are often overlooked by FMers, which is a shame because it really does make a difference, even if this is just a computer game.
Login to Quote

Luton Town fans are grinning from ear to ear as news of a contract extension for their young manager, Ryan Ferguson, was today confirmed by the club. The Scouse gaffer was due to finish his contract with the club after this term, but the managing directer Gary Sweet made sure to pen the revolutionary coach down for an extra year. Now that Ferguson's job is safe, he can put all his focus on his team's performances.

The full details of the contract were not confirmed but we do know that he has signed a one-year extension which will keep him at the club until the end of next season, June 2016. We also believe that he has gotten a pay rise and now earns £1,800~ per week. There is a rumour that Ryan Ferguson has a clause in his contract which states that if a team in a higher division would like to hire him, he has freedom to move there. Could this land Luton Town in danger in the future?

Ryan Ferguson: "I'm delighted to be able to sign a contract extension here. The last year and few months have been some of the best in my life, and I really do hope that we can produce more happy memories while I am the manager. We have made a lot of progress over the last year but there is still plenty more work to do. Hopefully we can perform well this season and prove how big a force we really are. Luton is where I belong, and Luton belongs among the world's best!"

Lol, I will have to give doing that a look

Lol, I will have to give doing that a look

It does take an incredible amount of time to do, but it is worth it

Fergie: Alex Is My Idol 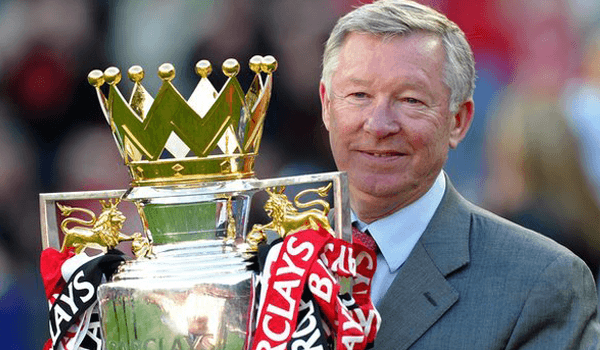 Reporter: "What has been your favourite moment so far in charge of Luton Town?"

Ryan Ferguson: "Hmmm, there have been quite a few great moments for me so far, most recently being the 8-0 win over Exeter and the late win against Fleetwood in the FA Cup. There was also winning the Skrill Premier last season but for me, there is only one winner. My favourite moment so far has definitely been winning the FA Trophy at Wembley. It is what I always dreamed of doing as a kid, and it came true for me last season. I remember that day like it was yesterday, and I always smile while doing so."

Reporter: "Who did you support as a child growing up?"

Ryan Ferguson: "Liverpool Football Club was my childhood club. I was a passionate Kopite, and I still am. I was only two years old when Liverpool last won the league title, so obviously I don't remember it at all, which is a big shame. I grew up through the nineties, when Liverpool really were on the decline. It was a tough time for Liverpool fans, especially the older ones who had witnessed the great teams of the '70s and '80s. For me, it was the confusion and sorrow was what struck me the most growing up. But at the end of the day, no matter what happened, we supported our club until the very end."

Reporter: "Last question, which manager, or managers, was your inspiration while growing up?"

Ryan Ferguson: "Obviously there have been some wonderful managers over the last twenty years and I do take inspiration from José Mourinho, Carlo Ancelotti, Rafa Benítez but the one who inspired me the most is my namesake; Sir Alex Ferguson. He had a touch of gold about him, and you could see that every single year. He rescued Manchester United from collapsing, and he created a footballing culture which has reached the outermost corners of the world. Everybody wants to play for Manchester United now, because of Fergie's work. He is a master tactician, a great financial planner, but most importantly he's a great man manager. He always got the best out of his players. He won the Premier League in his last season as manager with what was possibly his weakest ever team in twenty years. You don't win thirty-six trophies for nothing, this guy is a genius. Sir Alex Ferguson is my idol."

Walter
8 years
Nice few updates. Believe it or not, I have done that type of stuff and succeeded - ONCE!

I won't go into details but I did quite a bit of research on the team I was versing (first and undefeated after 13 games) and somehow came away with a 2-1 win..

Anyway, enough from me, good to see you've extended your contract again!
1
Login to Quote

Jer
8 years
Great updates, people tend to forget that a lot, which I agree. Either way, a decent month, and you've screwed Stam over with Smith.. How many goals now :P?
1
Login to Quote

Pauker, well if you actually read the update, you'd see his season stats under 'Player Of The Month'


After what had been an absolutely cracking start to the season, we were looking to end the year of 2014 on a high. Could we do it?

We started the month brightly as a hat-trick of penalties dispatched Grimsby, before we beat Plymouth in a 4-3 thriller. We won two, drew two and lost one of our other five games. I'm happy with our results this month. We knew that December would be tough for us but we stayed strong and we got some very good results. I am particularly pleased with the win over Mansfield, as they are battling for promotion too. 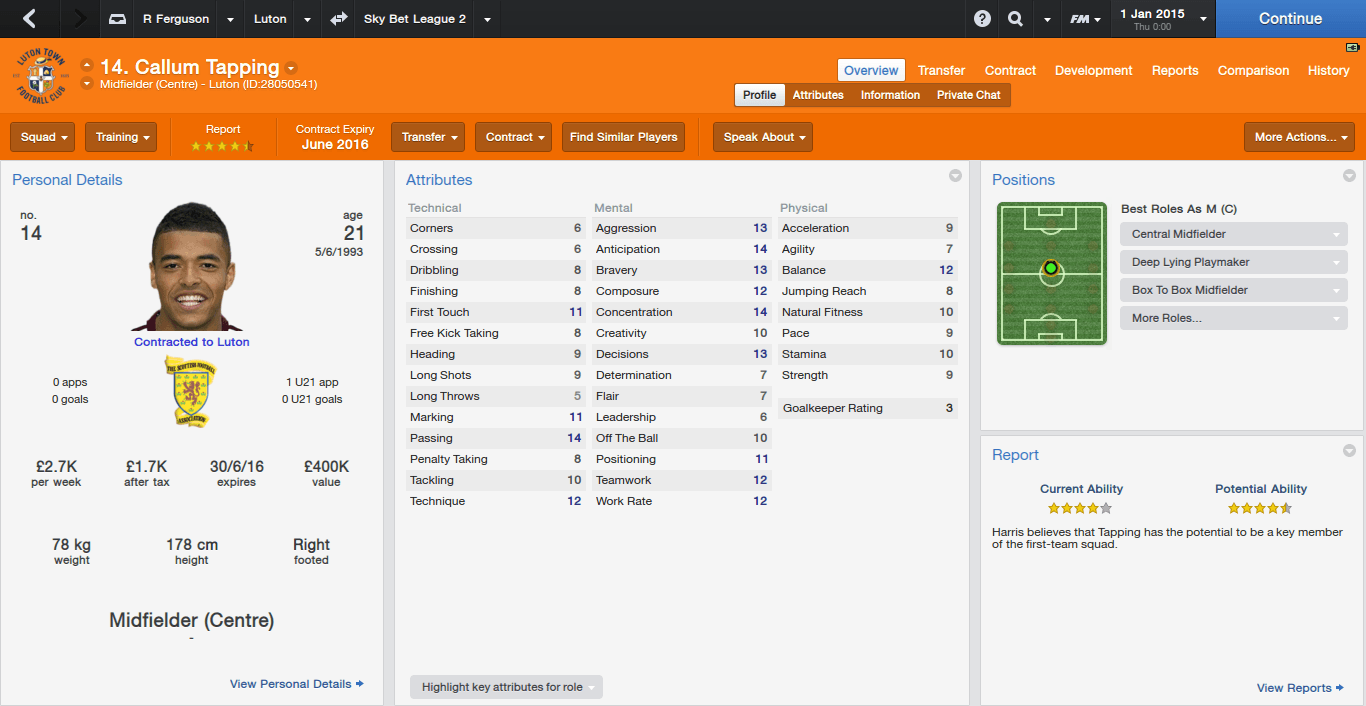 Callum Tapping is my player of the month. He has been fantastic in midfield for us since signing from Hearths in the summer. He's a very solid midfielder who contributes to both attacking and defending for us. He is a brilliant passer, and that helps us enormously. He will be a key player for us in future years. 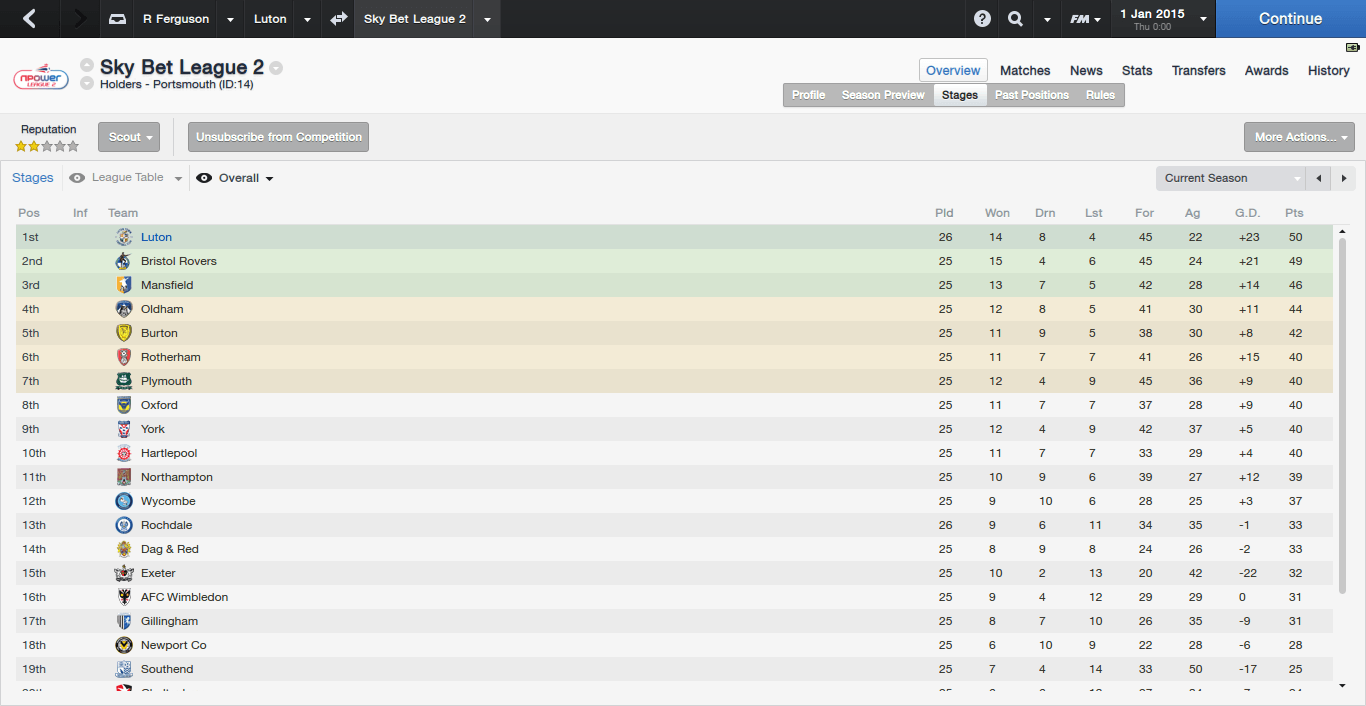 We have miraculously climbed above Bristol Rovers and Mansfield and we are now in first place after December! I am absolutely delighted with our season so far, it has been superb. After twenty-six games, we sit on top of a league which we were expected to struggle in. We are a point ahead of Bristol Rovers, although they do have a game in hand so they can reclaim their lead over us. Hopefully we can stay in the top three come the end of the season and claim promotion.

We play six games next month, including five league games and an FA Cup third round match against Aldershot. I do fancy our chances against Aldershot, who are in the Skrill Premier, and I will be expecting us to move on to the fourth round of the competition. The five league games could turn out to be very tricky indeed, so I will be hoping for at least nine points in those games.

The 510 Series
8 years
Why are Bristol Rovers doing so well? In fact, why are they in the Football League at all?

Keep an eye on their position in the league as the season unfolds, it gets rather interesting 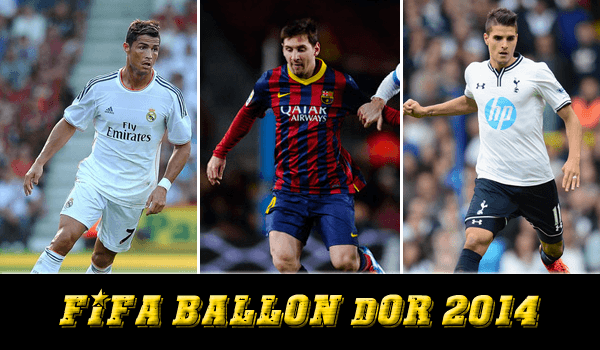 It is that time of the year again! This is when the three best players in the world over a calender year are announced. We all remember last year's result, with Lionel Messi pipping Cristiano Ronaldo and Franck Ribéry to the Ballon d'Or. Who would win it this year? Would Messi retain his title for a sixth consecutive year?

Third place, on 147 points, was Tottenham's Argentinian winger Erik Lamela. The electrifying attacker has been Spurs' shining light this year, appearing in 53 games, scoring 20 goals and assisting 24. He was pivotal in Spurs' 2013/2014 league season, where they finished in an incredible third place in the Barclays Premier League. At just twenty-two years of age, Erik Lamela has many years ahead of him and is certainly one of the most exciting youngsters in football, if not the most exciting.

Cristiano Ronaldo had to settle for second place yet again, as unfortunately his consistently high standard of performances were not enough to claim the crown of "world's best footballer" with 311 points. He notched up 59 appearances for Real Madrid in 2014, scoring a brilliant 26 goals and setting up 17 goals. He helped Real Madrid to three trophies in 2014; the Liga BBVA, Copa del Ray and the Spanish Super Cup. He now has fourteen trophies to his name as the Portuguese trickster is well on his way to becoming one of the greatest players in football history.

Nobody needs to guess who won the Ballon d'Or for a sixth consecutive time, we all knew that it would be Lionel Messi, who scored a record high 515 points in voting. The Argentinian maestro has wowed his fans this year, scoring 23 goals and assisting 17 in 57 appearances. He has been a pivotal player in a Barcelona side which, unfortunately, is currently in a stage of redevelopment. He is the world's best ever footballers, and a sixth Ballon d'Or proves it. 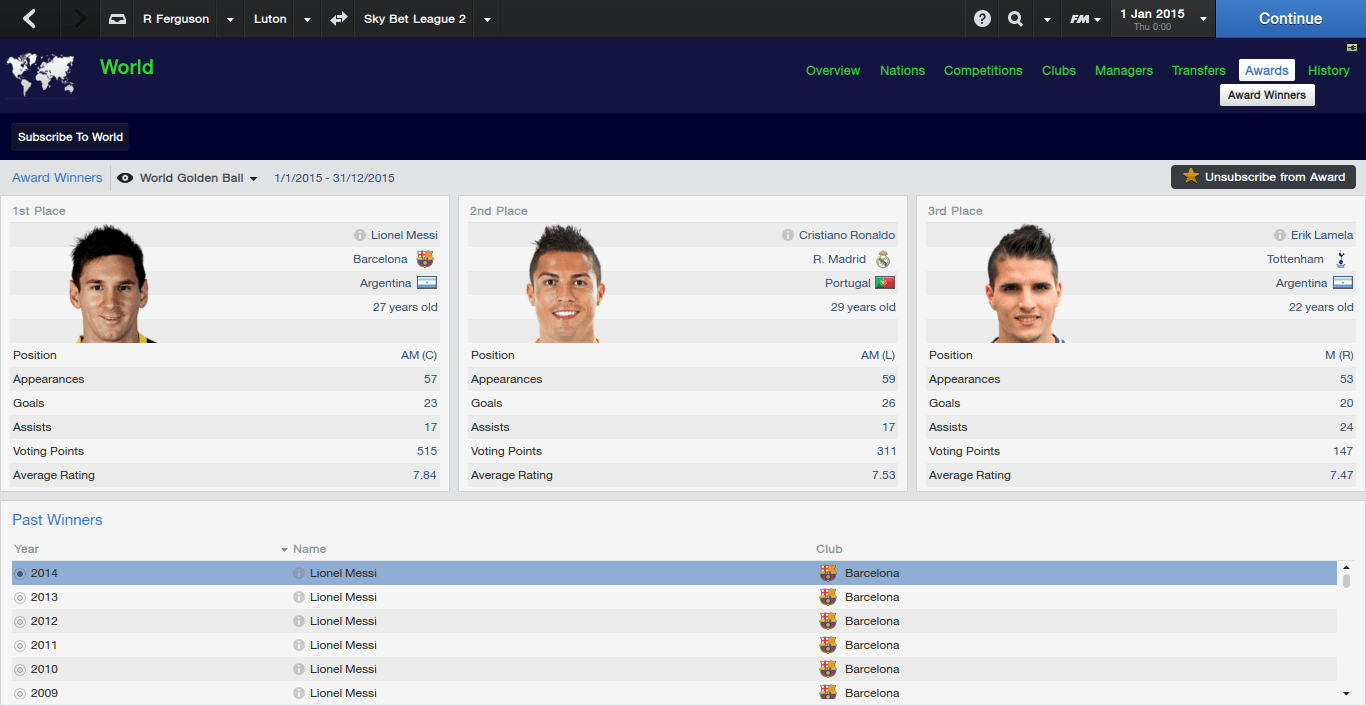 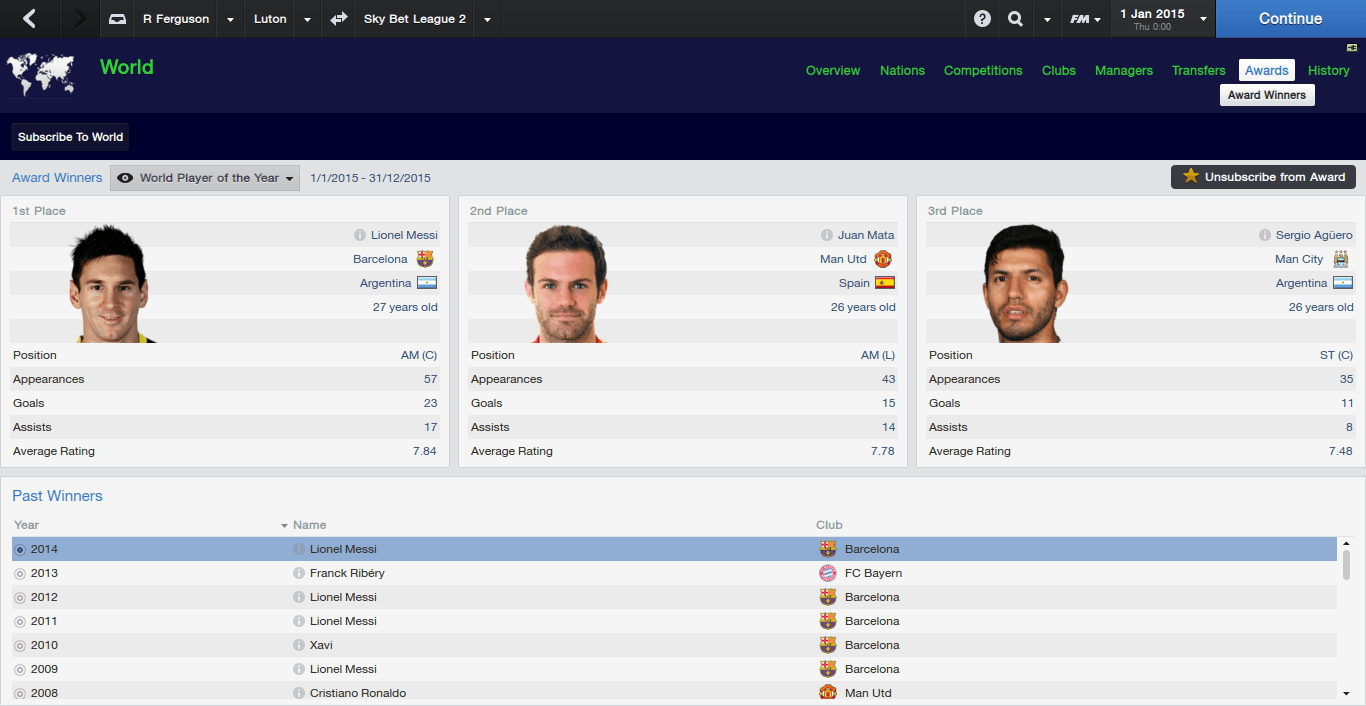 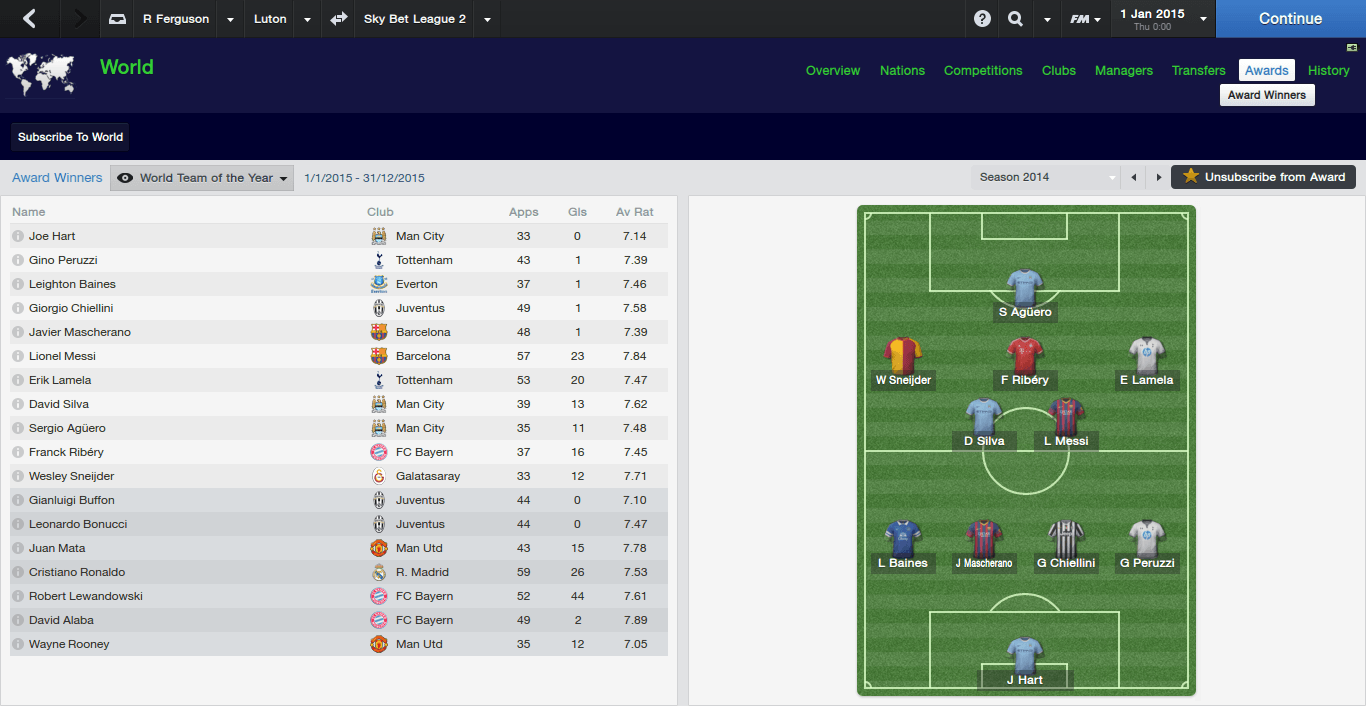