ChloeAJLee
6 years
Just read all 13 pages! Wow Niko, your writing and graphics are stunning! I'm in love <3
1
Login to Quote

pompeyblue
6 years
Really nice updates, hopefully the meeting will sort out your recent form and get you back to winning ways!
1
Login to Quote

Justice
6 years
fmhunter, thanks mate, hopefully we can get back to top form

FMP, thanks, I'm glad you enjoyed it

pompeyblue, hopefully it does, thanks!


Well we certainly hit rock bottom lost month! We struggled big time, and I made sure the players knew of my disappointment with several stern team meetings. Hopefully the players would be inspired to hit some top form.

Well we certainly did improve over these two months! February was a little inconsistent, with two wins, one draw and one defeat in the four games which we played. I understood that it would be difficult for us in that month, due to a lack of confidence. However, March was a completely different story. We drew our opening game of March against Oldham, but we then demolished our opponents in five straight wins, including a vital win away to Oxford. I am delighted with this run of form, and it certainly will motivate us to finish the season in style. 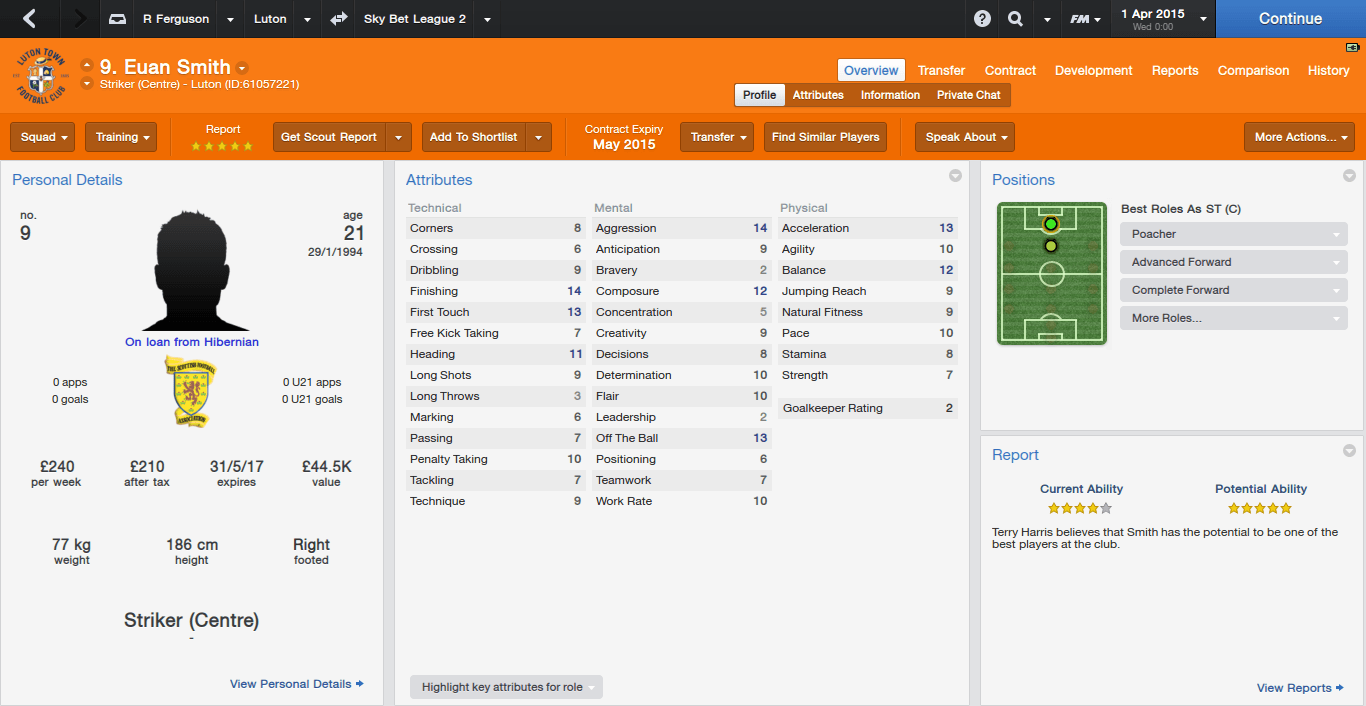 Was there ever going to be anybody else to stand up and make the difference? Euan Smith scored an incredible nine games in the last two months to be our best player over the period. His goalscoring ability has been superb and he has shown the footballing world that he could potentially go on to become a lethal striker for a top team, if he continues in this vein. 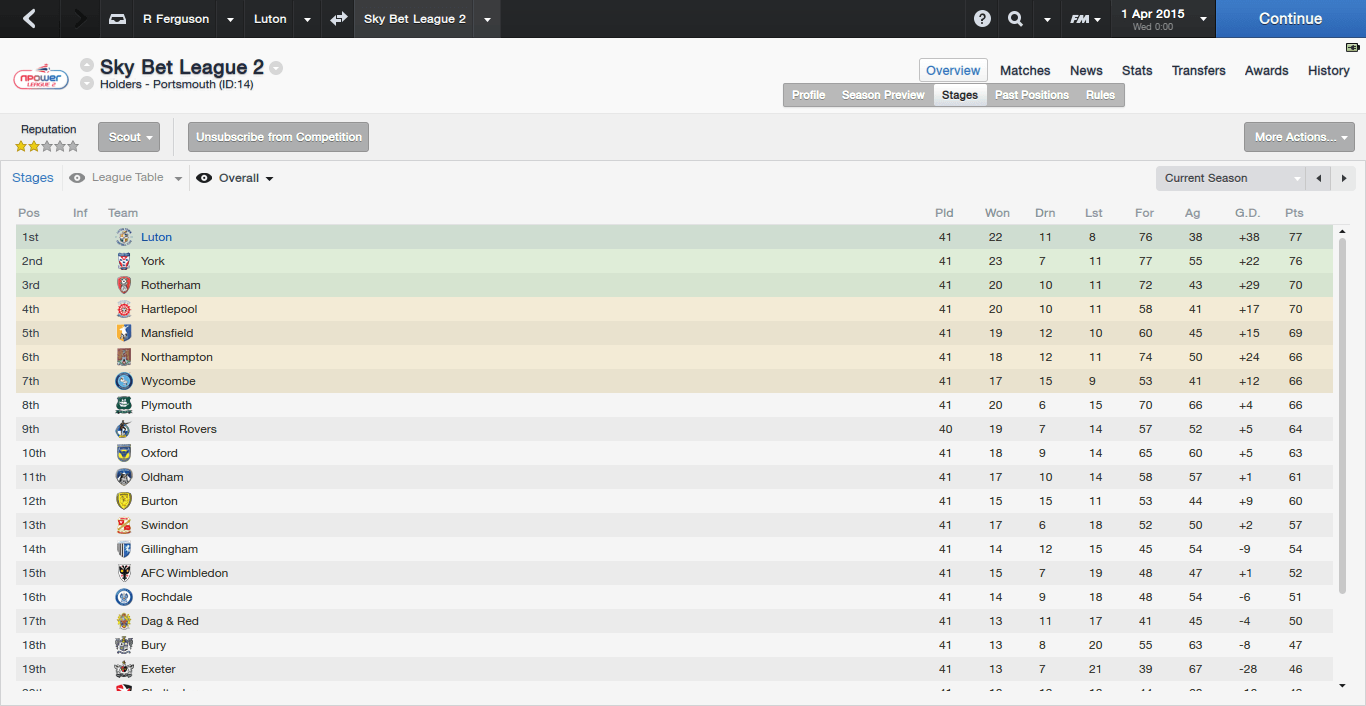 We are back on top with just five games left to be played! This has been such an amazing achievement, considering we were only just promoted to this division. Five more points will guarantee us at least a play-off spot, in the worst scenario, while nine points will guarantee us promotion. We are just one point above a very in-form York side, so it will be difficult for us to stay on top, but who knows? Anything can happen!

We play our final five games in these two months. Every single game will be tough for us, no matter who we play. Our toughest challenges will be away to Rotherham and Mansfield. They're both chasing promotion so the two games will be contested hotly. Nine points will guarantee us promotion this season, so that is what I'm aiming for. If we can do even better and win the title, I will be over the moon, but it is not my priority. C'mon you Hatters!

Josh_MU
6 years
Up the Hatters! Good luck!
1
Login to Quote


Yeah, hopefully we can keep it up!

Rablador
6 years
C'mon you Hatters! Amazing results, yet, of course, you go and lose to lowly Accrington!

Still a few games to go but promotion is already looking a certainty now, congrats

Still a few games to go but promotion is already looking a certainty now, congrats

pompeyblue
6 years
That's more like it, excellent results!
Good luck in the last remaining fixtures, you better bring that league title to Luton

Spurs
6 years
Brill results, looking forward to seeing how the next few months go! I reckon you'll win the league, (League One, here you come) =D
1
Login to Quote 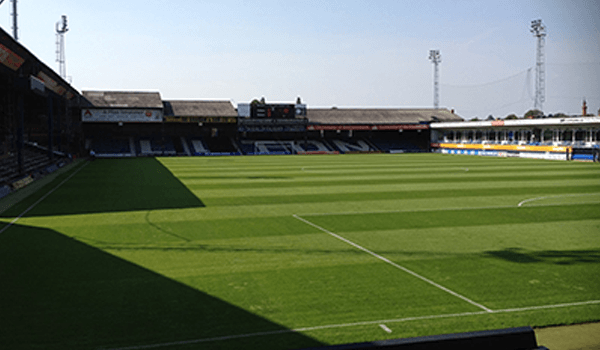 Luton Town's managing director Gary Sweet has earlier today confirmed that the club will be looking in to purchasing Kenilworth Road from the local council. They are currently renting the ground, so are unable to expand it. The purchase of the 110 year old stadium would cost the club a lot of money, which would only be seem payable for Luton if they were to take out a large bank loan.

Gary Sweet: "We are looking in to purchasing Kenilworth Road from Luton town council. The stadium is very important to our football club and we have had many great memories there. It is a place where we want to have our future and we would like to expand it too. The stadium is likely to set us back about three million pounds, which we will pay for through a bank loan.

Hopefully we are successful in buying Kenilworth Road, as it is very important to this club, as I said before. It would be a large step forward for the club to have it's own stadium and we can then focus on developing it for the future. There have been some great memories here in the past, especially over the last year or so, and we want to create plenty more!"

Josh_MU
6 years
Nice work on agreeing with the board to buy the ground, it always adds a much better feeling knowing that the stadium is yours. 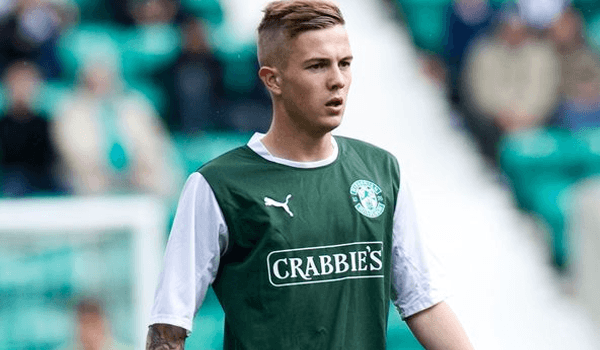 Euan Smith has put an end to all speculation linking him with a permanent move to Luton Town by signing a two-year extension to his contract with Hibernian which will see him remain at the club until June 2017. The young Scottish striker had supposedly been in a concluding piece of a contract negotiation with Luton Town before Hibernian came knocking offering him a lucrative deal worth £450 per week. Smith's contract was due to expire at the end of this season, and this news will come as a sore blow to Luton Town and it's fans.

The six-foot-one striker from Edinburgh has been in electric form on loan at Luton Town this season, by banging in no less than 26 goals with over a month of the season left to play. He has been the most exciting player in Sky Bet League 2 and his form has left his critics raving about his future. It is looking very likely that Luton Town will earn promotion to Sky Bet League 1 this season, and their manager Ryan Ferguson was desperate to keep Euan Smith for longer than just this season.

Ryan Ferguson: "Yes, we did want to keep Euan Smith here permanently but he's signed a new contract with Hibernian so that is that. I'm not going to reveal how close we were to completing the deal when his club came knocking, but I don't have anything against Euan for the decision he made. He wants to play at the highest level possible, and the Scottish Premier League will certainly be his next step to stardom. Hopefully Euan can keep up his great form for the remainder of this season and I know that he has a great career ahead of him."

Euan Smith: "I'm delighted to be able to sign a new deal with Hibernian. They've helped me develop so much as a player and they have really given me the platform which I need to succeed. I do love life here at Luton but, without disrespecting them, I need to be playing at the highest level I can and hopefully I can do that at Hibernian next season. I will give my all for the rest of the season here at Luton and hopefully I can help the team to win the title."


Yes I know the picture isn't Euan Smith, but I couldn't find one