Neal
8 years
Considering the league you are in currently, a 4-4-2 definitely seems the way to go. The tactic seems nice and balanced, hopefully it provides you with a sturdy base with which to reach promotion!

That five step plan is quite detailed, and I'm sure you can create a global superstar with this club like you did with Vauxhall!

By the way, not only have you not replied to any comments, you've deleted some

That five step plan is quite detailed, and I'm sure you can create a global superstar with this club like you did with Vauxhall!

By the way, not only have you not replied to any comments, you've deleted some

Justice
8 years
@Denzy: Hopefully I can, thanks


So the Luton adventure had begun! Our target for this season, and certainly our expectation, was to earn promotion to the Sky Bet League Two. So, without further delay, let's see how we did in the first three months under my reign!

The season started with an away game versus Southport, who we demolished by a sound score of 3-0. We then followed on in the same vein of form with five wins and one draw in the next six games, including demolishing wins against Forst Green and Kidderminster. However, we then suffered our first loss of the season away to Wrexham and inconsistency then began to bite in, as we won just four and drew five of our following nine matches. However, we did beat Cray in the FA Cup 4th Qualifying Round, which sees us enter the FA Cup 1st Round, where the real work starts. Overall, I am delighted with our start to the season. Despite the inconsistency, we managed to claim a lot of points, and remain unbeaten at home. It is always difficult to pick up results straight from taking over the reigns of a club, especially in the lower leagues, so I am pleased that we only suffered one loss in the first three months of the season. 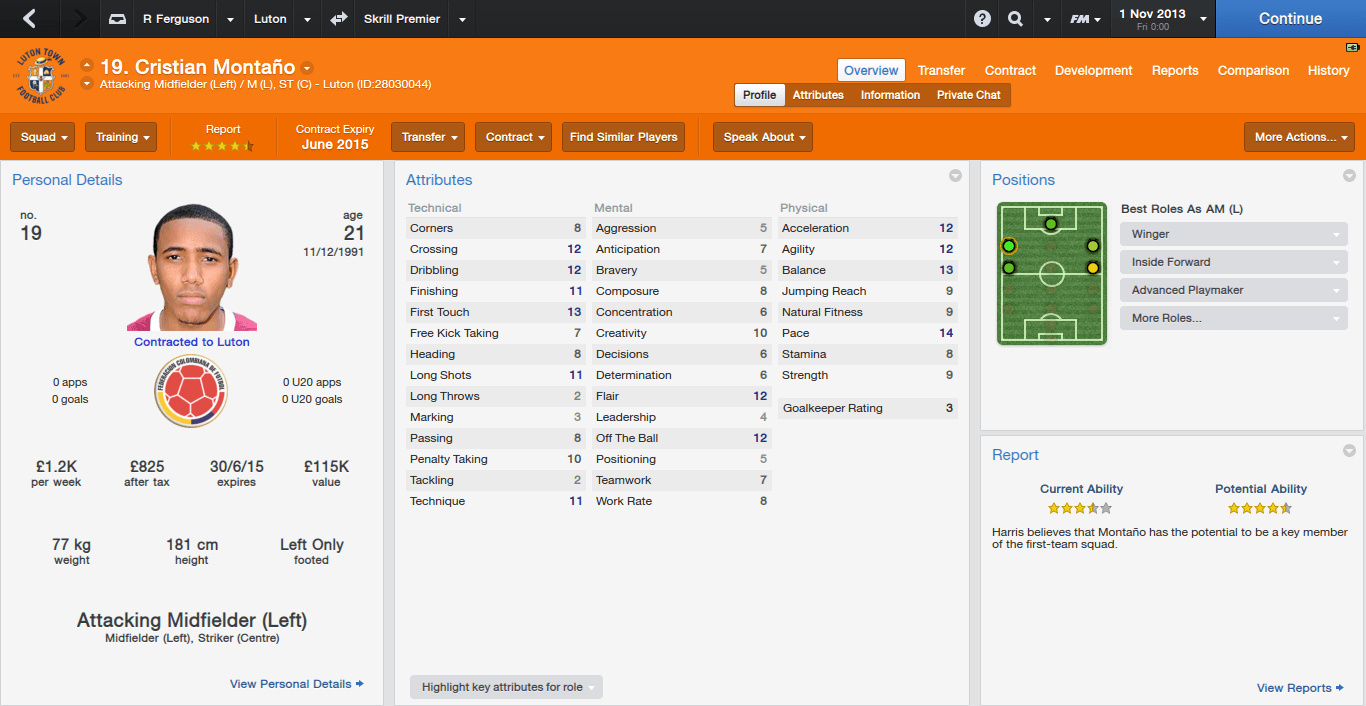 Cristian Montaño has been our stand-out performer so far this season. He has been an inspirational signing, and has played well wherever he has been asked to play. I have deployed him on the left, on the right, but most often up front, where he has shown some truly lethal form in front of goal, leading the league's scoring chart with ten goals, and with eleven goals in all competitions. The young Colombian attacker has also claimed three assists, and has two man of the match performances to his name. He has been crucial to our team so far this season, and could become an iconic player for Luton Town in the years to come! Despite our rather inconsistent form, we are top of the table with 33 points after 16 games! With a two point gap between us and second-placed Cambridge, I suppose that you could consider this season to be rather successful so far. Our Goal Difference is already far superior to others in the league, and that is mainly due to our rock-solid defence, which has conceded just 14 goals so far. We have a six point safety net from any club outside of the promotion play-off zone, so we are relatively safe right now, but we cannot get complacent. We are just over a third of the way through the season, and we have plenty more work to do. Hopefully we can continue in the same way and top the table by the end of the season.

We have at least twelve fixtures to play over the course of the next two months. If we do manage to overcome Torquay in the FA Cup, we will have thirteen games. We do not yet know who we will be playing in the FA Trophy, but hopefully we can be competitive in this competition, as it is one which I feel that we can win. Our key fixtures will be the two away games against Cambridge and Barnet in December. They will be the most difficult matches, and ones which we need to win in order to cement our position at the top of the league. Hopefully we can come up with good results over the ten league games, and I will be hoping for 18 points or more.

Josh_MU
8 years
Man, love this update style! Really detailed and nicely presented! As for your first three months, absolutely exceptional! Apart from that loss against Wrexham you've done really well! Montaño is doing really well, such a good capture for you! Looking forward to your next update!
Login to Quote

Kippax
8 years
Tried to manage Luton in FM13 but lost my save after 2 seasons... But from what I experienced it's a hard journey through the divisions! Anyhow, good luck!
Login to Quote

pompeyblue
8 years
Best of luck Justice, it's been a great start to the story and the season with some very good updates and results!
I look forward to more

Kippax: It certainly won't be easy, thanks

Bantams
8 years
Amazing updates Justice, really enjoying this story so far! If it's anything like your Vauxhall story then we are in for a treat, keep up the terrific work!
Login to Quote

Barnet_Boyz
8 years
Good for luck for the rest of em season. Try and lose to Barnet please

Oh I'll try to be nice to them

LFC
8 years
Montano seems a beast, though very controversial in real life. Hope your success continues, and that Montano keeps performing for you.
1
Login to Quote