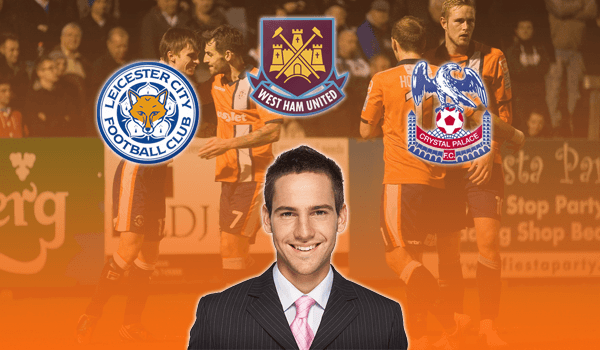 Luton Town's manager Ryan Ferguson has wowed the footballing world with four trophies in three seasons, including three consecutive league titles against all the odds. Blackpool came knocking for the manager last season, but he turned them down without a single doubt in his mind. However, three very reputable clubs have come knocking for Ryan Ferguson this time, and all three are apparently willing to offer a big wage and massive transfer budgets to lure him away from his current club which he loves so much.

Leicester City: The Foxes were the fist club to come calling for the talented, young manager. They were promoted to the Barclays Premier League in 2015, but were quickly relegated back to the Sky Bet Championship after finishing bottom of the league last season under long-serving Nigel Pearson, who was quickly sacked. Leicester City are one of the favourites to win promotion back to the Premier League and are supposedly willing to offer Ryan Ferguson a transfer budget of ten million pounds to make it possible, not that their squad isn't capable of doing so already. Their squad boasts the likes of Connor Wickham, Chris Wood, Kasper Schmeichel and Marc Albrighton, who are all very highly rated players. Will their magnificent squad be able to lure Ryan Ferguson to the King Power Stadium? 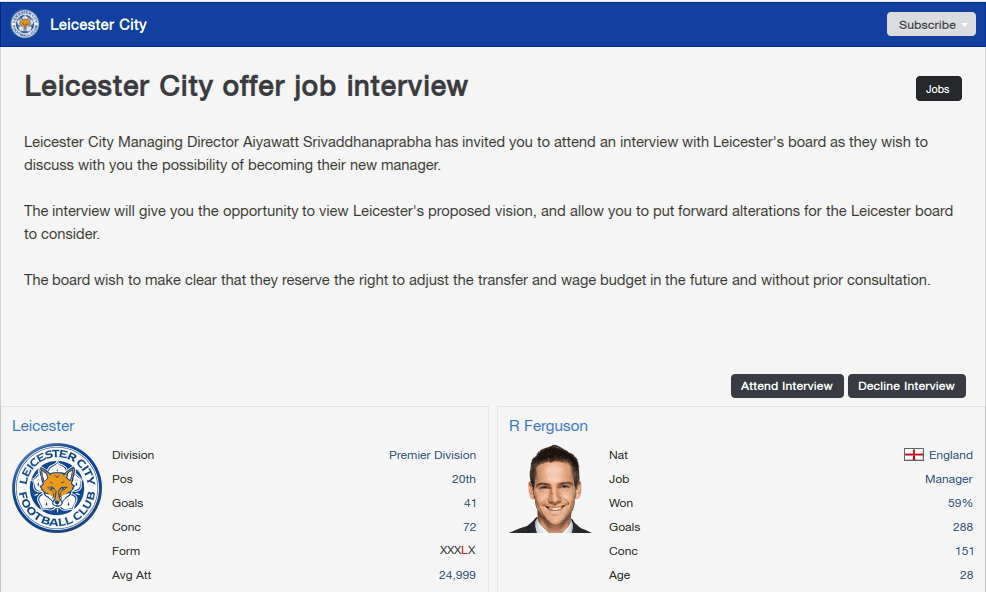 Crystal Palace: The Eagles were the next club to come looking for Ryan Ferguson's signature. Having been promoted to the Barclays Premier League in 2013, Crystal Palace established themselves as a very strong football club in England, and have become quite wealthy in the process. Having survived in the Premier League for two seasons, three was too much for much-lover manager Tony Pulis who couldn't avoid an eighteenth place finish last season which dismissed Crystal Palace to the Championship. Pulis was axed from the club immediately, which came as a shock to the Palace fans. However, with a fifteen million transfer budget lined up for their next manager, they are sure to attract a lot of coaches from a lot of clubs to the team which is predicted to finish first in the Championship this season. They boast Martin Kelly, Joleon Lescott and many others in their magnificent squad. Will Ferguson leave Luton for Palace? 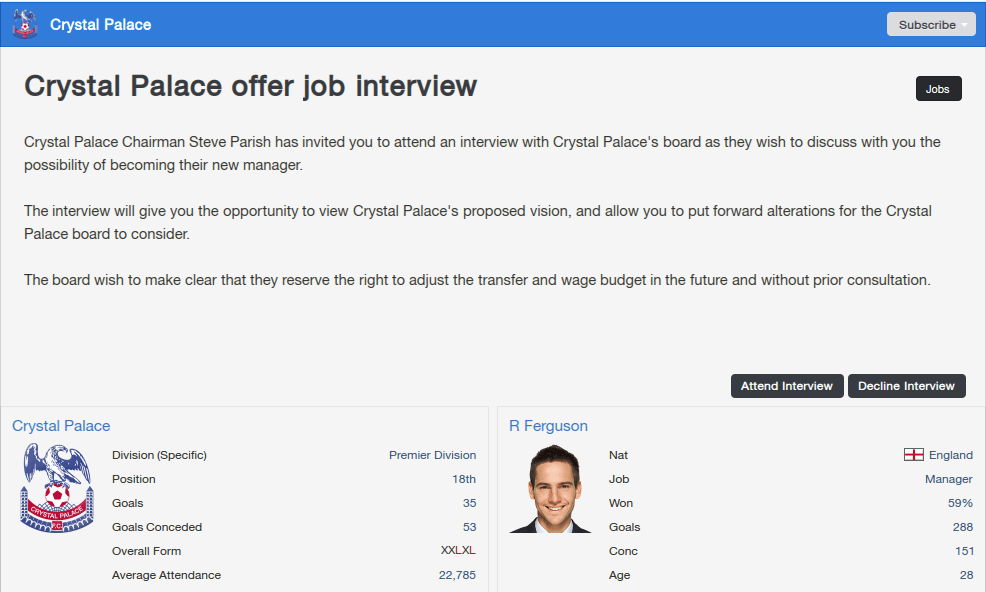 West Ham United: The Hammers were the last of the three clubs to come for Ferguson's management skills. They were relegated from the Premier Division last season after finishing second last in a disappointing year. After enjoying a recent four year spell in the Premier League, West Ham's finances are in a good state and they boast several big name players, such as Iago Aspas, Andy Carroll and Stewart Downing, who all previously graced the fine pitch of Anfield, Liverpool. With a reported five million war chest, there are plenty of other clubs who can offer more money. However, none of them can offer the tradition and values which West Ham United has. It is a historic club which not many managers can turn down. 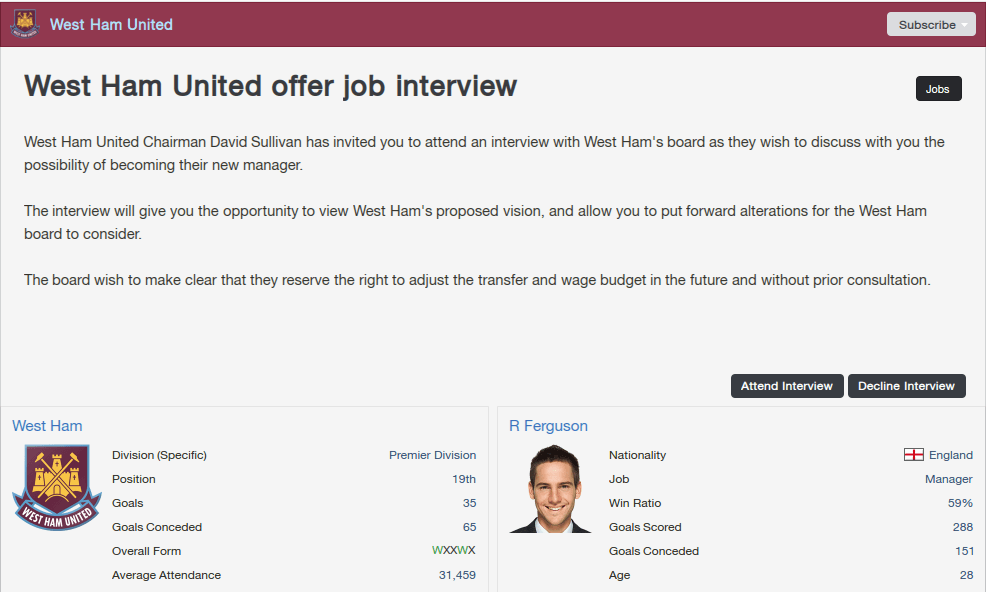 I think that we would all prefer Ryan Ferguson to stay at Luton Town, but will he be tempted by any of these three big clubs? Keep posted to find out!

Neal
8 years
If you leave, I'll only not be furious if you go to West Ham. I might be able to deal with West Ham. Otherwise stay or I'll kill you

cfcmarkt
8 years
If you leave Luton, I will not be happy.
Login to Quote

Bantams
8 years
Ryan Ferguson can't leave, NOOO! He has to stay put and win the league again!
1
Login to Quote

Justice
8 years
Neal, Josh_MU, Pauker, cfcmarkt & Bantams, thanks guys, I guess we'll have to find out whether he leaves or not! 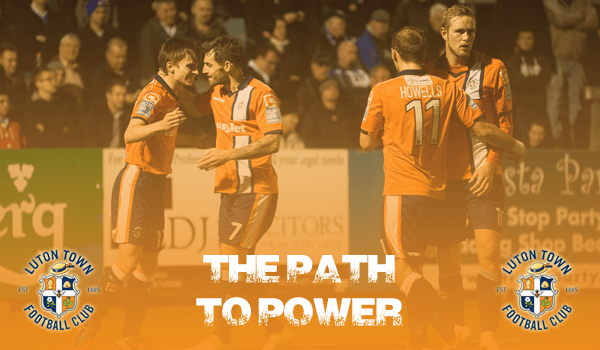 Luton Town's manager Ryan Ferguson has recently been in the spotlight of the footballing world, as he has been linked to several jobs across Europe and thee clubs have confirmed that they have made approaches for him. These three clubs were all relegated from the Barclays Premier League last season and will all be playing with Luton Town in the Sky Bet Championship next season. Big transfer budgets were offered to Ryan Ferguson, and he was offered ten times his current wage.

However, he was not to be lured away from the club that he has grown to love so dearly. Today, he publicly announced that he has declined all moves made for his signature and that he is looking forward to a long and successful career at the helm of Luton Town.

Ryan Ferguson: I know that a lot has been said about my future here at Luton Town in previous weeks and that the majority of people expect me to leave for clubs with bigger squads and bigger pay-slips. I have been linked with this club and that club and I've supposedly agreed deals to join over half-a-dozen clubs, all across Europe. I would like to start off by saying that I am not going anywhere. Luton Town is where I work, I enjoy working here and I will continue to work here for the foreseeable future. I have respectfully declined all approaches made for me and I have confirmed my allegiance to Luton Town in previous board, staff and team meetings. I'm staying put for now.

I want to say thank you to all the clubs who have offered me the chance to take reigns somewhere new, and sorry that I cannot be part of your future. I didn't decline your offer for any negative reason, I just wish to stay where I am. I am quite flattered with all the offers and media coverage which I have been receiving recently. All this tells me that I've been doing something good all these years. Being in the spotlight is a massive part of managing a big team, and Luton Town is becoming a bigger team with every passing day. It won't be long before we're mentioned all across the world as one of the world's best clubs. That's not arrogance, that is ambition.

For me, I need to clear my head of all thoughts relating to the media. I need a clear mind in order to plot our plans for the future, my plans for the squad and prepare for next season. We have a lot of work to do to stay in the Championship next season, and we cannot afford to dwell on media distractions and rumours. I understand that reporters are just doing their jobs, and they are doing a fantastic job at that, but it does become frustrating for his football clubs at times, as I'm sure everybody can understand. However, we just need to focus on our football. That is what we are here to do, and that is what we want to be good at."

Specialist in success
8 years
Glad you stayed! Really enjoying this career. Anyway, Luton would never get to the BPL without you at the helm so you couldn't complete the objectives you set.

Josh_MU
8 years
Thank God you're staying! Hopefully you'll be able to take Luton to the top!
1
Login to Quote

Walter
8 years
Should've gone to Blackpool while you could... jobs like that don't come around easily! While they may not have been as young as the picture above suggests, we did sign three regens with fantastic potential (I hope). All three players are eighteen years old and look to have fantastic futures ahead of them, if they are developed well. Justin Atkinson, Matthew Howes and Adama Bama are their names, and they will be in and around the first team this season. 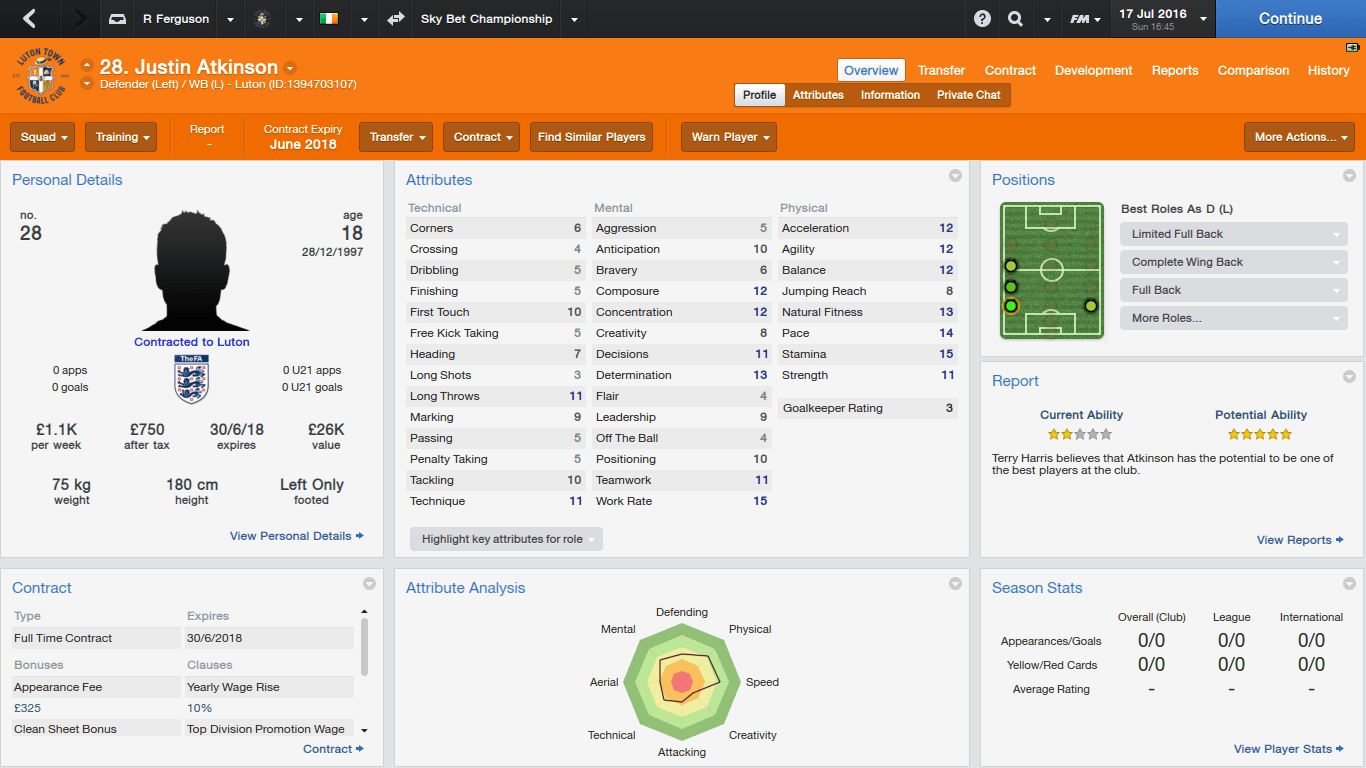 Justin Atkinson might not have a regens face in this screenshot for some strange reason, but he is a regen for sure! He came through the Harrogate Town academy in 2014 and went on to play 81 league games for them in just two seasons. He played a key part in getting them promoted to the Skrill Premier. Atkinson is a very athletic left back. He has a lot of experience under his belt already, which is evident in his mental attributes. His technical attributes aren't the best but they will improve over time. He isn't the best left back that we could have signed in terms of current ability, but he has great potential in him to become a good Premier League player. If worst comes to worst, he can be sold for a hefty profit!

"It is a dream come true to join a club of Luton's stature. Hopefully I can learn a lot from Ryan Ferguson and improve my skills." 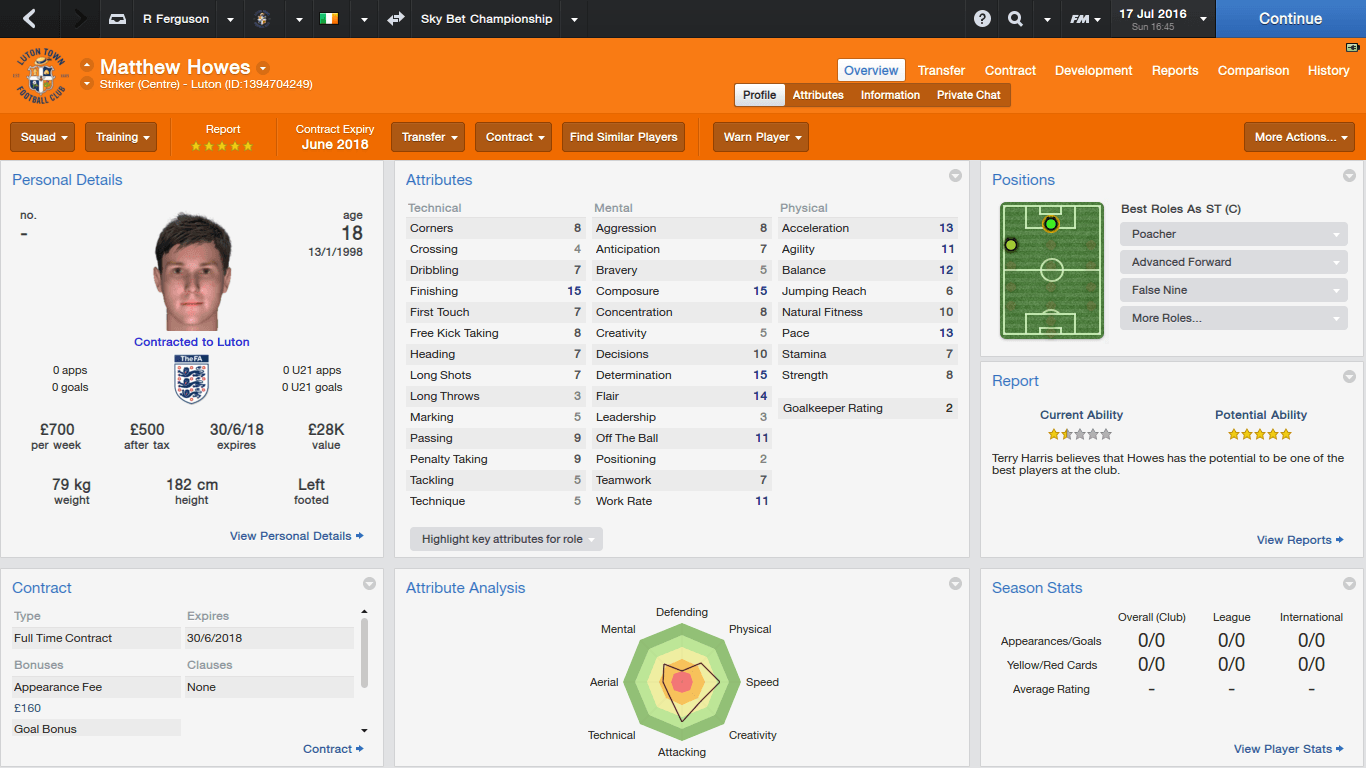 Matthew Howes is not yet developed as much as his compatriot Justin Atkinson is, but he does have a lot of potential in him. He came through Basingstoke's academy in 2014 and has clocked up 58 appearances for their senior team, scoring 11 goals. He has a lot to improve on, but I think that he has the potential to go a long way. Hopefully he can develop a lot during his first couple of seasons here and become a part of our senior team in the future.

"I'm delighted to be able to sign for Luton Town. They have a great youth system and I can learn a lot from the experienced players here. I'm a fan of their playing style and I feel that it suits me a lot." 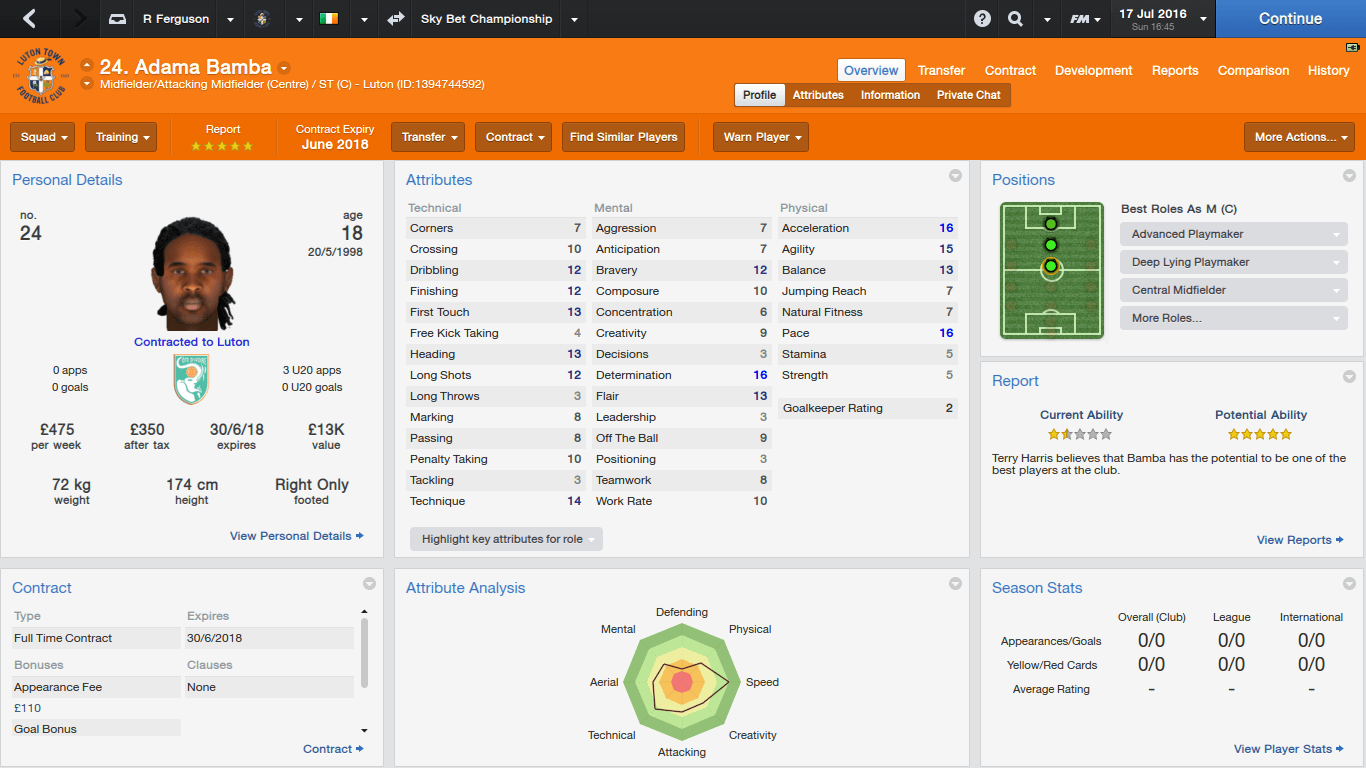 Adama Bamba is our only foreign signing of the three. He comes from Académie JMG in the Ivory Coast. I spotted him through my own personal tactical scouting system, which involves refining my player search by attributes, and offering trials to players who I cannot scout. Adam showed up on my radar almost a whole year ago, but he was only able to sign this year due to age restriction for work-permits. He is incredibly quick and is a natural forward, yet for some reason his old club played him in midfield. I will re-train him as a striker and give him game time this season to showcase his talent. This kid could become a massive star if developed right!

Aaron
8 years
Bamba and Atkinson I can see being brilliant, not so sure about Howes but ofc you never fail to surprise when it comes to developing youth!

Walter
8 years
great signings, can't wait to see what Adama Bamba does for you!!

Did he purposely say it wrong cos he's African?