bebero
6 years
Everything was perfect, I was a professional player now, get ready for big matches in the league, but it would disappear in less than a few days. My dream was about to come true, to play at a higher level, not just pleasure. But the team had some problems, our boss had ties to the Mafia, the city, and thus problems arise constantly.

After the owner was involved in a crime, the whole team was shocked and did not know what might happen to us.
I thought everything would be fine, and try to remain a united group.
But the owner has left many unfinished things here, money hidden, hidden packages in the stadium and his rooms.
Thus mafia working, stormed the stadium and our rooms there.
Everything was getting worse, I was kept there by the mob, not run from the police, or to leave their money.

It was becoming less clear for new players did not know what would happen.
But the police came at a time at the stadium, I thought that was our salvation.
To all who have played for this, but unfortunately was worse than expected.
People in the mob, did not want to give up, and began to fire on the police, got weapons and must defend the stadium, but we had to do this as we were footballers, not soldiers.
I tried to run away, but I was hit by a bullet in the leg, and I fell down to the ground, I reviewed all the moments spent in football, in front of his eyes and fell asleep.

After a week.
I woke up tied to a bed, not knowing where they are, and great toe surgery. I did not know what had happened, but I felt really bad.
I had no one, I had no family, and did not know if I can help someone. But came the doctor, who explained the whole thing.

Doctor : You are in jail at the moment, and that is medical.

Bebe : What prison? for what?

Doctor : When were found by police at the stadium, had a gun in his hand, but was still used. Thus you become complicit in that attack! Now I have to let you go.

Bebe : Wait! You can play and football is my only salvation !?

Doctor : Do your leg suffered very much! I'm sorry for giving you this news. You will be arrested for one year, you are banned stadiums from Romania!

Everything was lost to me, a year will be closed, my dream was destroyed.

There have been a few months! 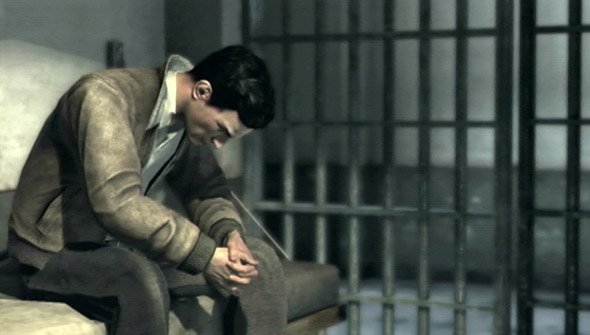 All I could do was dream, and think about football!
I was thinking about a career in coaching, but I State Prison and this all seemed impossible.
Login to Quote

bebero
6 years
It's been a year and all I saw were in prison walls draw me! 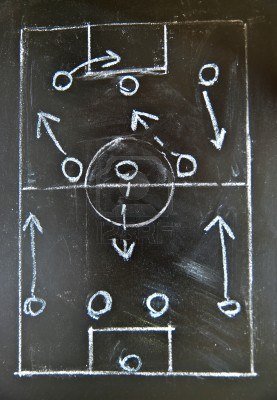 I decided not to quit football so in prison. I decided to play in the team from prison to play though. Unfortunately my foot was not fully recovered, but I risked.
But there was a football game, it was more of a wrestling match for orgoli and money from betting.
My team managed to play and win two matches, but unfortunately I ended up being beaten, and not on the ground.
After the beatings, I got another 6 months in jail because I was told that the beating began. Now we have to wait until I have the chance to leave this place again.

I hope that when you leave here, get rid of all the problems.
Login to Quote

bebero
6 years
The wait is over, I was released from jail! Now my dream can not be fulfilled, but can still do something about football, I decided to make a career in coaching. But I kept thinking, who wants a former inmate, as a coach.

I started reading books, and learn as much! So time passed, and I started looking for a team that would like to hire me. It took some time until someone was interested in me, but the offer came from Italy, the league 3. It was a wonderful day when I know I agreed to the interview! Once there, I told the manager, all my happenings.
He said, I do not have experience, but that gives me a chance!

It was a dream that I was living here, everything started to go well! I came to the team, and started to meet the team. 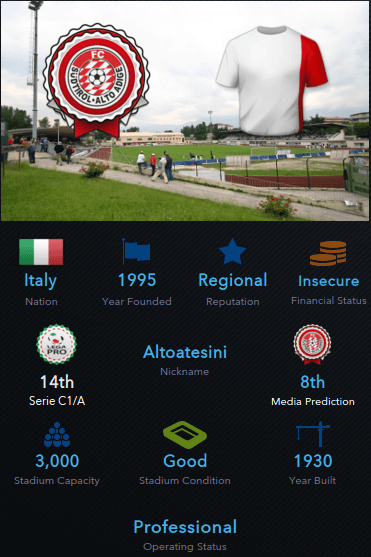 Players were surprised that no one has heard of me, and I hope to convince them to do a good job.

The team is very young, but I hope to face!
We are in March, there is little to end the current season, I hope I can do the job to finish, and save the end of the season.

I will return to the tactics for the end of the season.
Login to Quote

And I tried a new tactic! 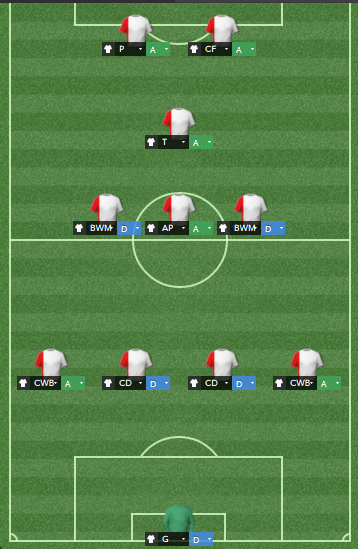 This is the tactic that I will use! I hope to be right and help me.

And I tried a new tactic! 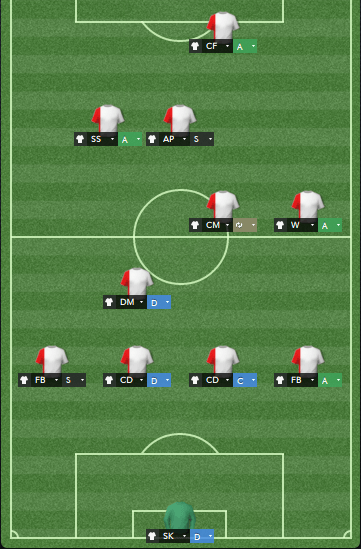 It's something different, I will try to play with it more in friendlies and matches easier.

My debut!
My debut as a coach, a home game! I was hoping to make a good match, and so was the team played very well, and made me jump up with joy.

A debut more than perfect! I hope to continue the same team, there are 7 games to play, I hope to make as many points! 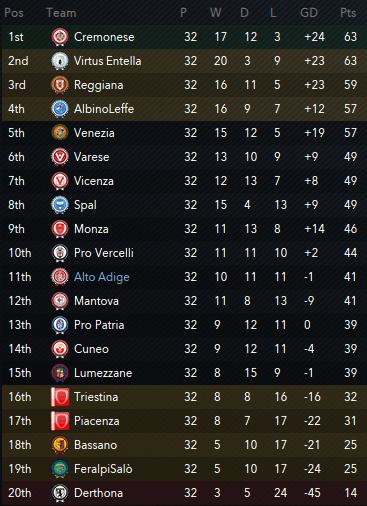 Standings after two victories obtained by me. I hope to get forward of points!
The two match!

I hope this form metin team, and I want to do a reconstruction in summer.
Login to Quote

Steve1234
6 years
good wishes for you..
Login to Quote

Slid3Tackle
6 years
Very good start mate! I will be following this!
Login to Quote


I managed to motivate the team, and in the end make good games this season. I am happy that the team managed to recover, and the results give me hope. But unfortunately more than half the team wants to leave the team, no longer prolong contracts. It will be hard to find replacements! But I hope I can do a good job.

I took the team after 14th, and we went up on the 8th, that makes me think how they were so low. I'm glad I managed to motivate the players.

Matches in which I was on the team bench! Were matched superb!
I managed to scored 20 goals, and to receive only 4.

Will be a tough time as they leave many players. Hope you can find substitutes.
Thus so ends my first adventure as a coach!
Login to Quote

Zed
6 years
Great finish to the season, and a very interesting tactic you've got, but it seems to pay off! GOod luck next season!
Login to Quote

pokarioboy
6 years
I love the tactic, and fantastic end of season form!
Login to Quote

The shock of the team!

I had a shock when I saw how many players have decided to salvage the team. I was very disappointed, but unfortunately this was not to be, I had to struggle to find freedom, or be willing to lend to me.

Thus began the brunt, I present the following transfers! 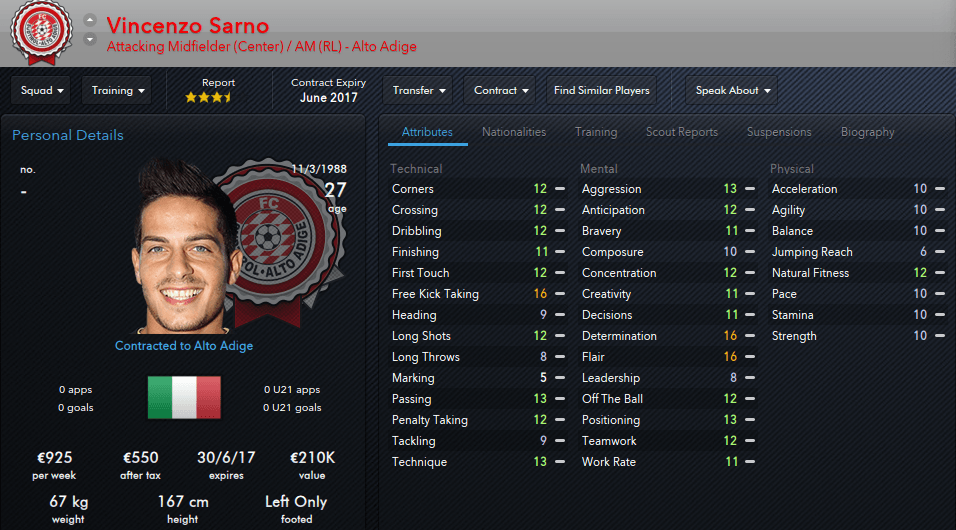 A very good player, I hope to help me! He has experience, and I'm sure will be helpful team. 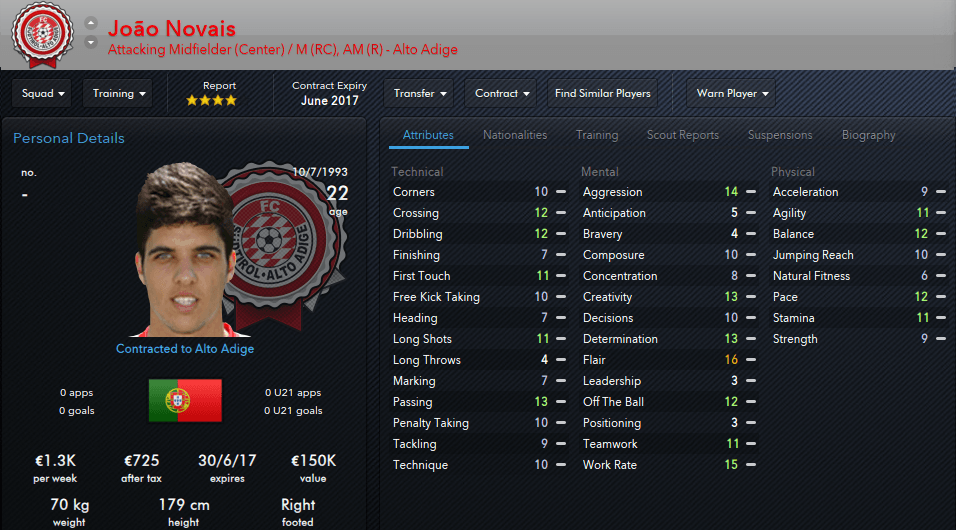 He's one player for the future, it is possible to train Sarno, I hope to play well. 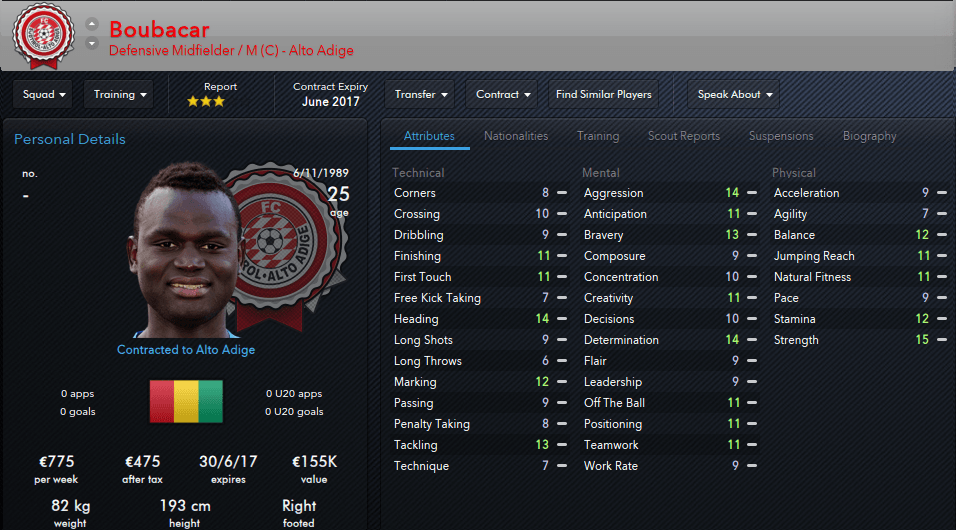 Looks pretty good, I think for my level. Hope to help! 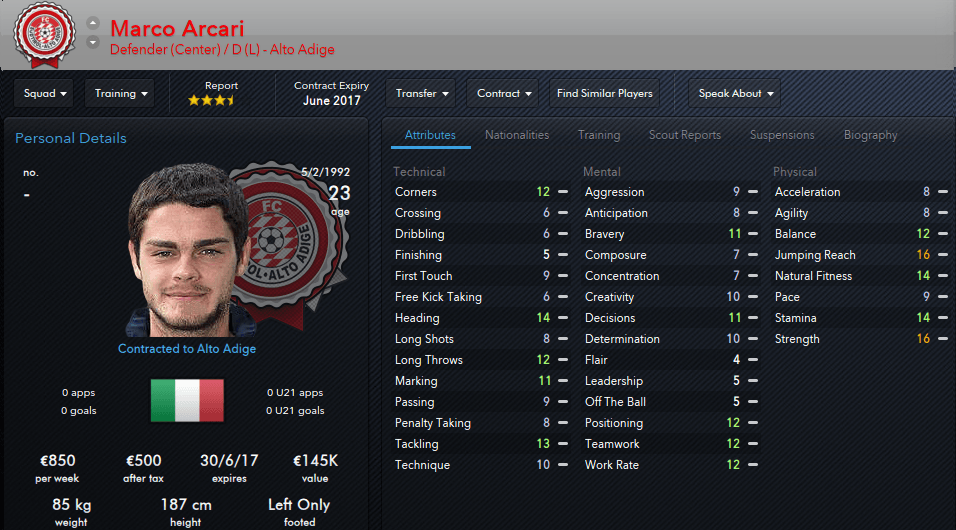 A young central defender that I hope to grow! I hope not to make mistakes. 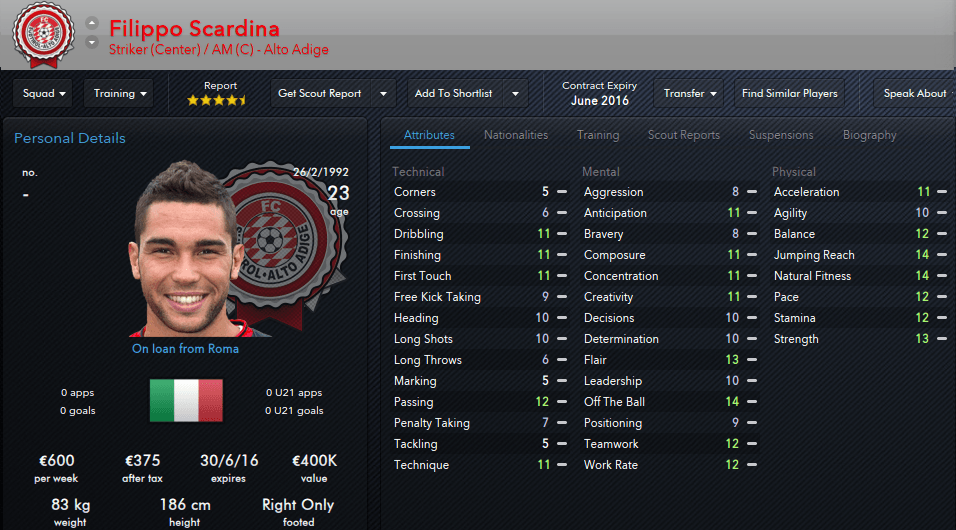 A player borrowed from Rome, the problem is the only striker in the lot! 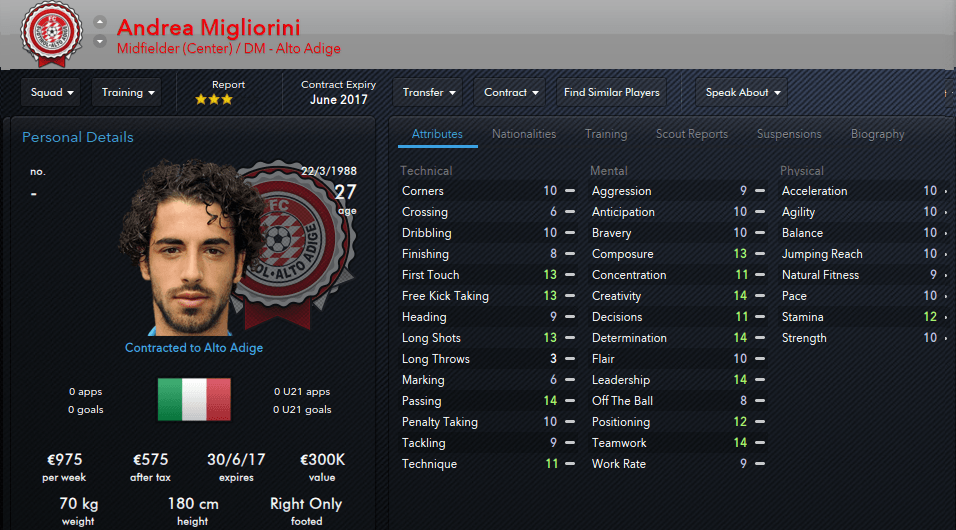 It's more reserve, but surely there will be chances for him. 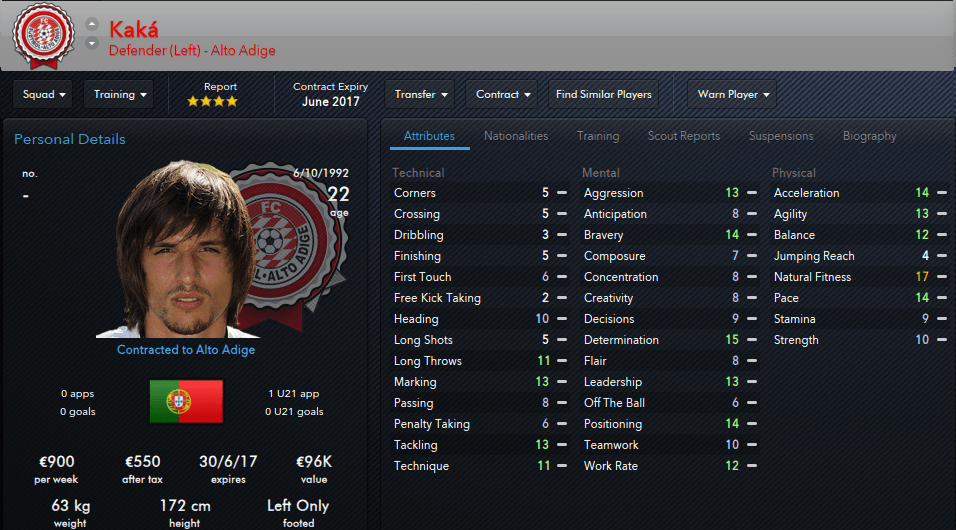 A quarterback who has good qualities, I hope to confirm. 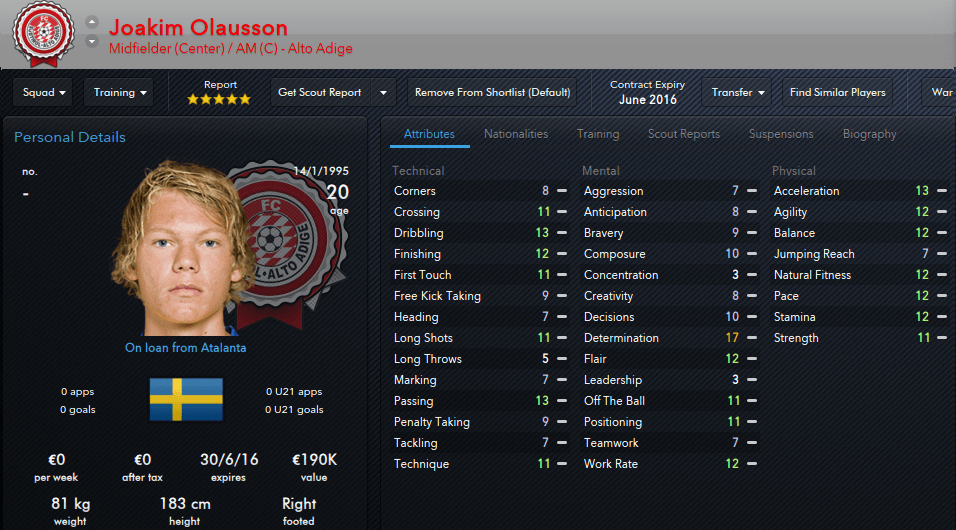 A midfielder came from Atalanta, which looks pretty good, has a lot to prove. 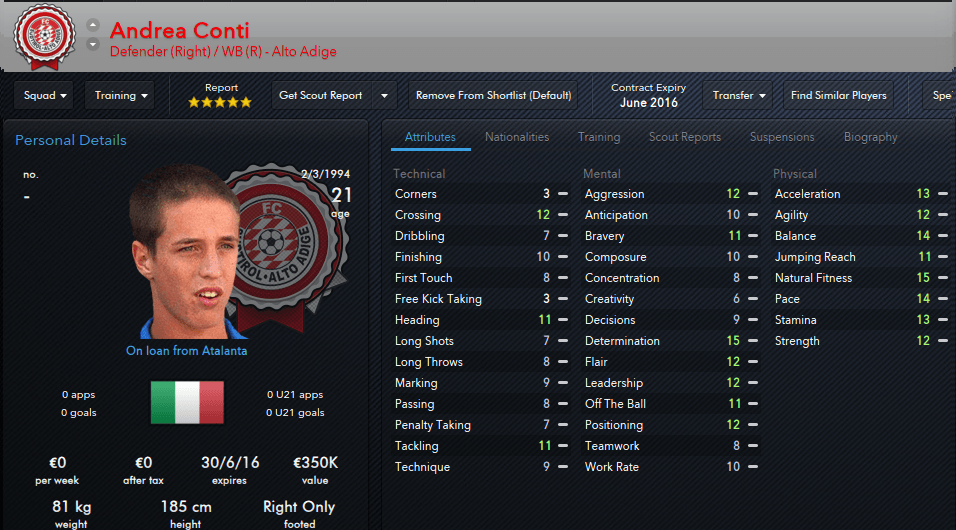 A young quarterback, I hope to help me even in matches lighter, if they exist.

These are transfers up now! I need denders, and a forward minimum.

So far we have started in the Italian Cup, we had good matches here.

Follow a tough match with Torino in the cup now.

Slid3Tackle
6 years
Some very good signings there!
Login to Quote

You are reading "A simple prisoner !".