Feliks
6 years
Everyone Thanks guys, I'm hoping these will help me in the league.
Login to Quote

Andrew Hoole, right, was our only scorer in October.

It was a disappointing start to the season, as we picked up just 1 point and scored 1 goal in our first 3 games. We had some injury problems that attributed to the bad form, but all in all we didn’t play our best. Here’s an in-depth look at the games. 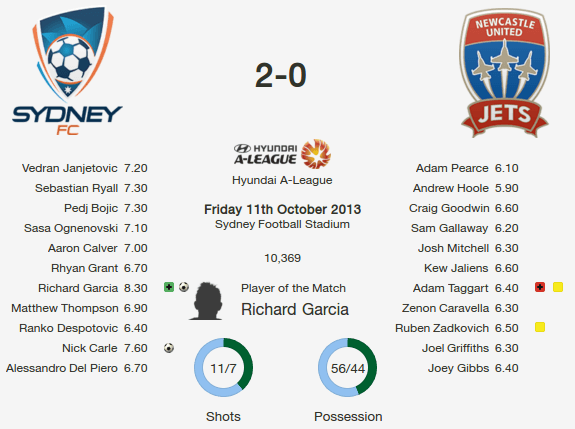 We travelled to Allianz Stadium, and played the title favourites Sydney FC. Boasting the likes of Del Piero and Ognenovski, they were a formidable outfit and injuries had meant we were playing a very lacklustre side. In goals was 16 year old Adam Pearce, making his debut, and we had a decimated defence. Also up front we were missing Emile Heskey and instead Joel Griffiths would fill his boots. But he didn’t. Our second rate team played like one, and 1 goal either side of the break defeated us. I guess you could say we dodged a bullet however as I expected a much larger loss. 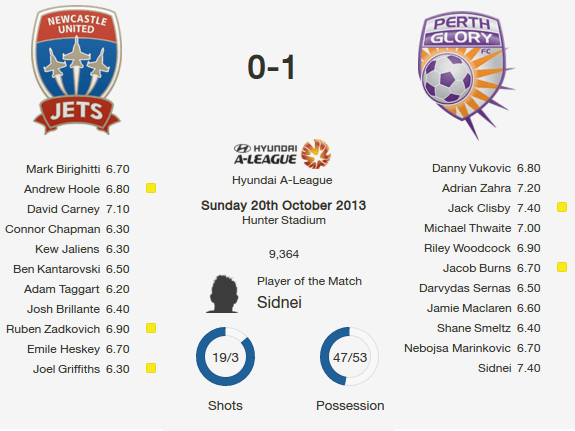 We had our first home game up against Perth Glory, and it was a very winnable game. We had a full strength team for the first time, and duly dominated the game without kicking a goal. But in the 90th minute, with their 3rd shot and only on target, a ricochet that wasn’t cleared was picked up by Chris Harold who slammed home the goal. It was a very frustrating defeat and one that got away. 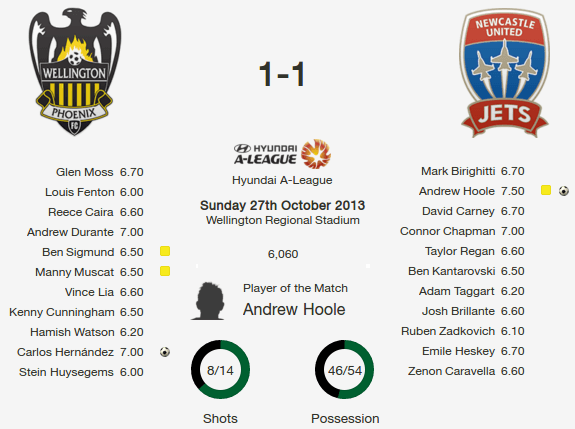 This time we needed the win. Another good strength team, with Heskey back to full fitness. It seemed we were on a roll when Andrew Hoole scored after 38 minutes and we seemed in control of the match. However, the Phoenix hit back with a Hernandez goal at 57’ and the games saw no major incident. However, we finally had our first point and a 1 game unbeaten run. Now to continue it. 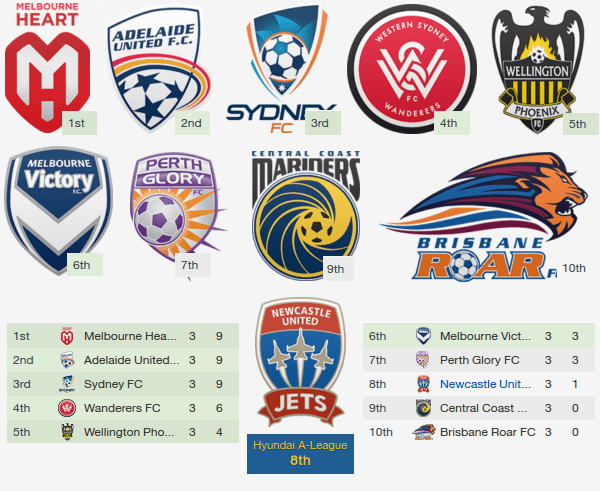 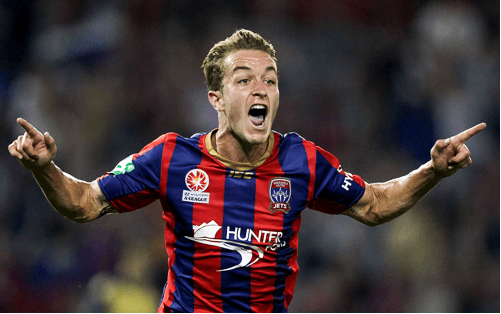 This month’s POTM, and my first ever, was won by my right back Andrew Hoole who scored our first goal of the season and was solid in each game.

The Mariners have been in horrid form, so hopefully we can get our first win against them. All in all, I’m hoping to have a far more positive month. Join me then!
Login to Quote

Zed
6 years
Not a great start, but I'm sure your form will increase in the coming games.
Btw, nice graphics

fzemdegs:However, we finally had our first point and a 1 game unbeaten run.


Optimism at its finest

Feliks
6 years
ASR-PSV I hope so too. Thanks

November- Job On The Line

Vice captain Emile Heskey made a vital impact this month.

My job hung on the line this month, after some disappointing results put me at the bottom. As you left me, my job was in the balance. Let’s examine what happened in some detail. 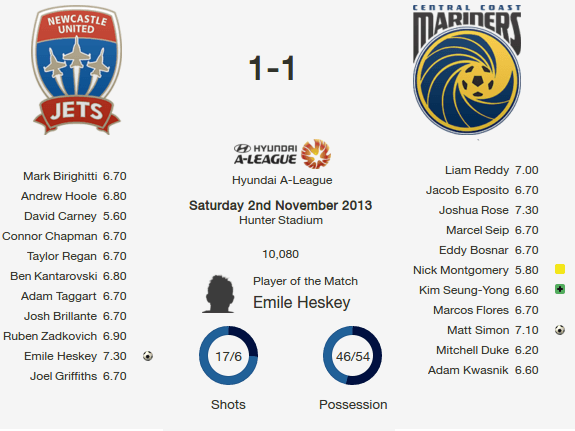 Yet again we dominated shots, and yet again we could only draw at home to the Mariners. Heskey opened his accounts which was a plus, and I’m hoping he can continue to contribute. 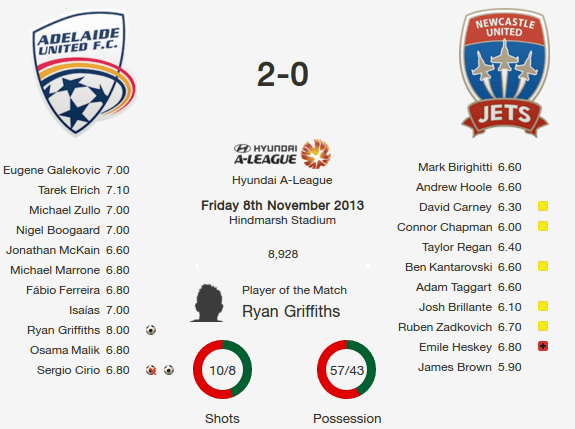 This time we didn’t dominate open play, Adelaide were simply better than us in all facets of the game. We were lucky to not lose 3-0 but Mark Birighitti pulled off a great save. This result also put a lot of pressure on me. 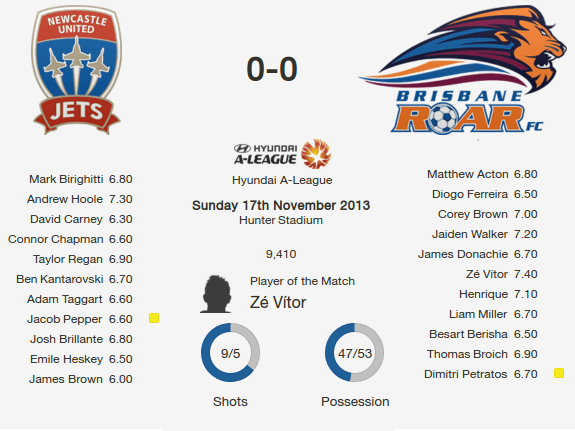 A very defensively minded match, with very few shots on target. What I needed was a win, what I got was frustration from the board. 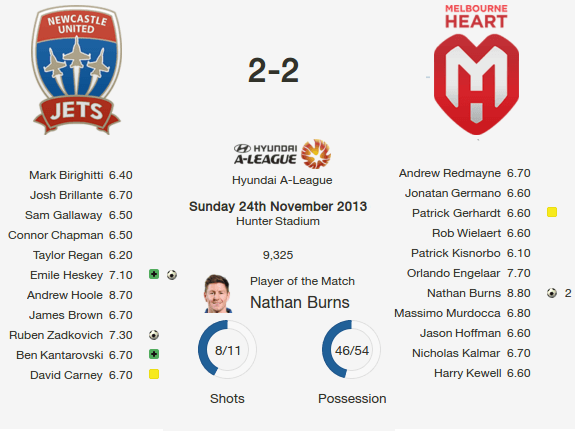 The Heart arrived at Hunter Stadium to play some great football, but we countered with equal beauty. It was a high scoring, high tempo game which pleased fans and pundits alike. On our side of the fence however, it was doom and gloom as Emile Heskey picked up an injury and the board called me in immediately after the game.

It was do-or-die. Win this game, or lose my job. The team standing in my way however, were these guys.

Currently sitting in 1st, with 6 wins, 1 draw and 0 losses would be Sydney FC. Boasting the likes of Alessandro Del Piero, Richard Garcia and Nick Carle, playing these guys at Allianz Stadium would be a daunting task and not one I’d like to be facing when I’m about to get sacked.

Next time on Doing It Down Under, I bring you live coverage of the game against Sydney FC. It’s do or die football, a game that will evoke emotions from players and managers alike. It’s the hardest of games, against the in-form, undefeated, over powered Sydney FC, while we sit in bottom. Who will win? Will I keep my job? Find out next time!
Login to Quote

Walter
6 years
It's Heskey's time to shine, I know it, he knows it - we all know it.

Time for the man... the myth... the legend, to stand up and reveal his true ability! Good luck!
Login to Quote

Feliks
6 years
Neal This love for Heskey is incredible. I thought he was crap? 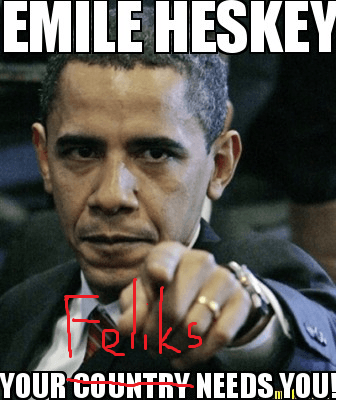 David Zdrillic- “And that concludes our preview. Fozz, who’s your pick?”

Craig Foster- “As much as I’d like to think the Jets can rally around Lodovico, Sydney are just too strong. 2-0 for me.”

David Zdrillic- “You heard it here folks. Now we cross to our commentary team at Allianz Stadium with Spider Kalac and David Basheer-----

Screens across the country go black, then a picture slowly makes its way into focus. Standing in front of a camera, in his bedroom, is Neal Hasan.

“Hi Australia! Thought I might bring you the coverage of this game myself. Now where the hell is the TV remote……”

Meanwhile, SBS frantically tries to regain control but fails, and this ‘Neal’ is going to be televised across the nation.

“Goodwin, yes, Craig Goodwin to the take the free kick. He’s about 45 yards away. He’ll look to get it onto Heskey’s big fat head. Oh wait. Oh crap! This is going close! One of the Newcastle players has taken the keeper out, no foul, and its 1-0 Newcastle!!!!!!! Goodwin scores!

“The captain passed it out wide to the right winger, he’s sprinting past his opponent. He’s swung a cross in, and it’s HESKEY WITH THE TOEPOKE!!!! What an amazing 5 minutes for the Jets!! 2-0 now!”

“I certainly did not see this coming, and I don’t even follow the A-League. The Jets have been amazing! One goal was an absolute fluke, but the other was a great team move. Let’s hope the match continues to this kind of standard.

“Good interception, he goes inboard, a good overlap by the right winger who’s already gotten an assist, he swings it again, HESKEY, HESKEY!.... oh no! He hits the upright!”

“And that’s the game folks! Newcastle have stunned Sydney to win 3-0, thanks to some heroics by the one and only Emile Heskey! Now for my post-ga-----“ 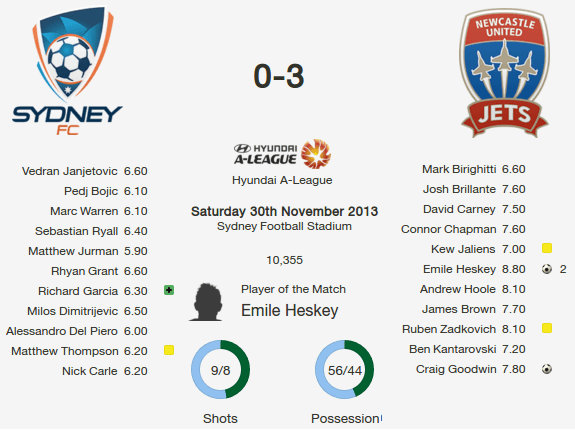 I can’t believe it. We did it. We went to Sydney, and demolished the league leaders. It was amazing to watch, amazing to be a part of. Craig Goodwin scored the flukiest goal, and Emile was just Emile. Legen-wait for it.
Dary.

We stay in 8th position, and hopefully we can rise up and get into the finals by the end of the season. 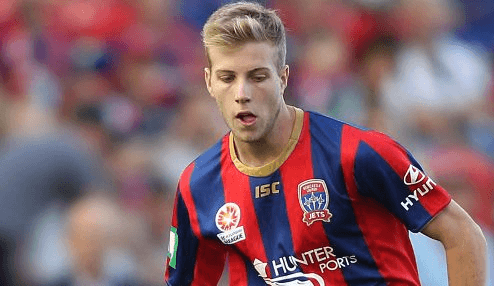 Versatile right sided player Andrew Hoole has wowed fans and coaches this month and has duly won the Young Player of the Month award. Hoole began the month as a wing back, but when I changed formation he made a quick and easy transition to right winger. In his 3 games there, he got ratings of 7.3, 8.7 and 8.1 and also got 4 assists.

I swear I am going to run out of Heskey images to use. In the 5 games he’s played this month, he’s kicked 4 goals and assisted 1, picking up 2 MOTM along the way. His presence his amazing, once he’s in the box he’s a threat. Need this every single month!

Next month we have some very winnable games, beginning with the bottom team in Melbourne Victory. Can we continue this form? We’ll see in December.

Now for your input. Is there anything you think I should add for detail? I’m looking to make this as detailed as possible, any suggestion’s a good suggestion.

Walter
6 years
What a remarkable performance! Hopefully something to build on in terms of results!