Feliks
5 years
Everyone Thanks for the great support guys, an update will be up shortly! Great to hear that my layout is being appreciated!

Jer
5 years
Me gusta. that'd be all.
Login to Quote

Tallery
5 years
Good results, keep it up!
Login to Quote

Slid3Tackle
5 years
Great graphics mate...I know how much effort and time you put in them! Keep it up like this!
Login to Quote 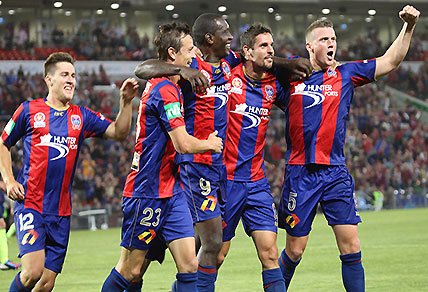 Welcome guys, my name is Alex Hall and joining me is Alexander da Costa and Knick Dearham and today we will be bringing you our analysis on the closing weeks of the Hyundai A-League, and how the Newcastle Jet's go in them. The Jets haven't been the most exciting of teams, but their steely determination and incredible defence has seen them catapult to the top end of the table. Alexander, Knick, how do you see their season thus far?
ADC-I think Lodovico has turned this team around, in 2013 they looked out of their depth and now all of a sudden they're the in-form team of the comp and they look like they'll never concede. I think it's been a marvelous season.

KD-I do agree with Alexander, it's been a good season, but I'm really not a fan of their playing style. I think defence can only get you so far, so the Jets need to start adding some attack into their game plan in my opinion.
Let's talk tactics for a second then. The Jets tried an attacking, 2 striker formation early on but have since changed to a 1 striker, more defensive formation and success has followed. Do you think, Knick, that Lodovico should change again?
I think yes. Heskey isn't kicking as many goals as I'd like, and Taggart has struggled on that left wing and off the bench. Bring Taggart in next to Heskey or Charisteas, give him the spoils.
Alexander, a question for you. Do you honestly think the Jets can keep us this form?
I think they have a great chance, some easy games this month after they survived a tough February. Everyone is doing their little bit, none less than Mark Birighitti who is in amazing form!

I can't argue with that, Birighitti is the best goalie in the comp at the moment, he's doing everything! Next week he'll kick a goal, I'm telling you.
There's just a lot to admire about the way everyone puts in 100% for the team. We haven't seen too many incredible performances to be honest. Birighitti has been amazing this month, Hoole has his moments earlier in the season, but the rest of the squad has simply done their bit, whether in defense or in attack.
One player you've got to respect is big old Angelo Charisteas, who came in, ageing, in his twilight zone, played his 9 games, replaced Heskey for a bit, and was all in all a decent back up. Lot of respect for that guy.
Ok, onto the month proper. March, how do you see it panning out guys?
I think we could just see the Jets climbing even more. 5 games this month right? Yeah, 5. So this month is make or break, then 2 games in April to seal the deal. I expect big things from the Jets this month.
See, I think the opposite. The league is really heating up at the moment and the Jets need to have some attack to stand a chance is this high pressure environment.
Well, thanks guys for your opinions. That's all from us, catch the March review shortly!
Login to Quote

ZapdosTheGreat Thanks for the support

Pauker Nah, he's the dumbarse of the panel


Hi guys. Yesterday, I got in a lot of trouble over some misuse of my laptop, and it has been taken away indefinitely. Therefore, this story is suspended for that time. Hopefully it can resume in the near future. I think this break will do me good, as I was slightly addicted to FM, but anyway, I will be on regularly soon!
Login to Quote

squirmy420
5 years
Bummer Degs! Make better choices next time so I don't have to wait for updates "indefinitely."
Login to Quote

A recent flu that spread around the Newcastle Jets youth squad hit manager Sean-Paul Lodovico and today he has been given the all-clear by club physios. Lodovico will now return to the training ground ahead of the match against the Wanderers. Club captain Ruben Zadkovich is pleased to see the gaffer after the 4 day absence.

"It's great to see Sean-Paul back at the training ground, he's been a great influence on the squad and we don't feel like a team without him there."

The Jets will travel south to Sydney to play the Western Sydney Wanderers next, in a match very winnable for the Newcastle outfit.
So after a surprisingly short punishment, I have gotten my laptop back and tonight I shall update in the March review! Be warned however, I have to change my presentation as I have lost some vital images. Hopefully you still enjoy!
Login to Quote