Neal
5 years
Josh_MU: Thanks so much Josh, and yeah perhaps I ran away with it a bit at the end

I hope Volland can really bring a new dimension to our attack!

jason_connolly1987: Damn, it's been a long time indeed! I'm honored that you read my story upon returning!! Any chance we'll see another Jason Connolly Classic this year?

P-KIDDY: He can be a difference-maker for us for years to come, I'm very excited to watch him develop! Thanks Paddy!

Walter: You have to splash the cash sometimes to get quality players; bargains don't always cut it. I think Volland is going to be a huge player for us!

mo_123: He's got a great eye for goal, and, more than that, he has incredible stamina, work rate, and determination; I know he will always work hard for the team!

pompeyblue: Thanks so much Josh, and I agree it was a large fee but I am just certain that he'll pay us back tenfold with some brilliant performances!

Icarus
5 years
Congratulations on winning SOTM, you still obviously "got it" since your Inter story tellin' days

Really good signing for BVB, signing Volland before Bayern do, that is

Neal
5 years
Icarus: Bayern can bloody rot! I'm not selling to those bastards for my life! >:(
Login to Quote


As Atletico charged through no less than eight fixtures in a jam-packed January, Borussia Dortmund was able to coast and recover through three games thanks to the Bundesliga's winter break. How did both teams fare? Let's find out! 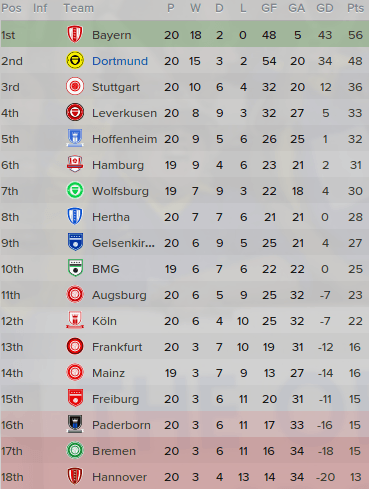 It was an excellent short month for Borussia Dortmund as they swept every team aside, winning four consecutive matches (counting a friendly to kick off the month). The match against Qatar SC, played in the Middle East, was a training trip for der BVB to get back in match fitness and get a good game under their belts before returning to the Bundesliga.

That first match against Paderborn went perfectly to plan for Brian Laudrup's men. The highlights of the game were continued goalscoring prowess from superstar Marco Reus and a debut goal for Kevin Volland. The young German came on as a substitute with 13 minutes to play and made an instant impact with his 20 yard strike.

The match against Koln was much of the same; Marco Reus's brace sealed the way, with Sven Bender adding a rare goal. Surprisingly, Bender scored again in the next game against Bremen after Ciro Immobile opened the scoring after 21 seconds; the German international has only scored 6 league goals total since signing for Dortmund in 2009.

This fairly simple month is to be followed with a similarly straightforward February; however, one major challenge looms. The 18th of the 'month of love' heralds the coming of world giants FC Barcelona coming to Signal Iduna Park for the UEFA Champions League 1st Knockout Stage first leg. Unlike Borussia Dortmund, it was an extremely long month for Atletico Madrid. However, positively, it was filled with eight straight victories, creating a surge of form that will be undoubtedly difficult to break. In this streak, we had a few very notable victories along the way.

For one thing, we have handily beaten Malaga in the 5th Round and Levante in the Quarterfinals of the Copa del Rey. We have drawn Celta Vigo in the semifinals, and I am fully confident we can emerge champions from that two-legged tie and take on one of Barcelona or Real Madrid in the final of the country's greatest cup competition.

Los Colchoneros managed to score no less than 29 goals, a little over 3.5 goals per game, over the course of January. The team scored at least four goals five different times, and scored five goals twice; first against Levante, and second, shockingly, against FC Barcelona.

It was an incredible match. Michael Laudrup surprised most people when his side came out in their usual, no-holds-barred attacking lineup, ready to take the game to Barcelona at the Camp Nou. A Mario Mandzukic brace and Arda Turan free kick, against all the odds, had put Atletico Madrid 3-0 up after eleven minutes.

Lionel Messi's penalty in the 13th minute began what the 96,000 fans were hoping was a comeback, but it simply wasn't to be. Joao Miranda and Koke scored again in quick succession around the half hour mark, and, at 5-1, the game was dead and buried with still an hour to play. Luis Suarez scored two late goals to spark some hope, but it was far too little, and Atleti escaped with a shock win.

"It was an unbelievable win, the best of my career," said Laudrup after the match. "All the credit in the world to my players; they went out there and did absolutely everything that we needed them to do to get this victory. If we can beat Barcelona at the Nou Camp, we can beat anybody, anywhere."

pompeyblue
5 years
Jeez, some sensational results this month, Neal!
That Barcelona game must have been brilliant, no wonder it's Michael Laudrup's best of his career.
Login to Quote

Feliks
5 years
Bayern have only conceded.5 in 20 games holy s**t
Login to Quote

Josh_MU
5 years
All those wins though. :o
Login to Quote

mo_123
5 years
WoW, both brothers doing well. so many wins.
Login to Quote

Neal
5 years
pompeyblue: Neither team could stop winning, it was an amazing month! The Barcelona game was an obvious standout...I've never seen anything like it! THREE goals in the first eleven minutes at the Nou Camp

Feliks: Bayern have simply been unstoppable. I'm afraid of when I have to play them at the Allianz

Josh_MU: Once my teams get on a roll, there's no stopping them 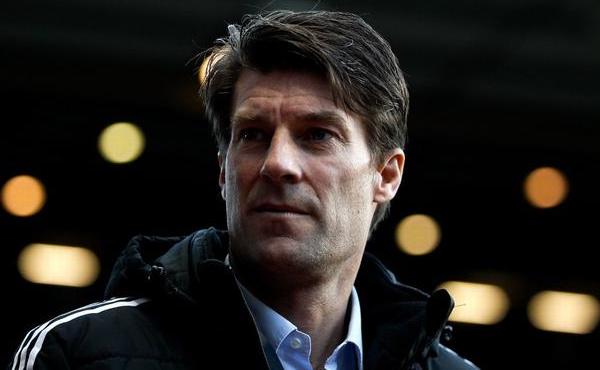 Despite early season doubts at Atletico Madrid following the resignation of their talisman manager Diego Simeone, things have gone perfectly according to plan in the capital. New manager Michael Laudrup has led Los Colchoneros brilliantly thus far, and has signed a contract extension through the end of the 2015/2016 season.

It has been an astounding first seven months of Michael Laudup's managerial reign over Atletico Madrid. Many fans and pundits doubted the Danish legend, saying that his only real success came in the Danish Superliga with Brondby and an up-and-down tenure at Swansea, but he has proven all of those doubters wrong in this third crack at La Liga.

Previous stints at Getafe and Mallorca were short and relatively ill-fated, and most people did not know if Laudrup was ready for the jump to an elite team like Atletico. However, just over half a year into the job, he has certainly endeared himself to Los Colchoneros faithful with his passion on the touchline and his team's fantastic results.

Results are the key
The performances and results that Atletico have put in this year have been incredible. Where last year's team put more emphasis on high press and hard work with a more direct attacking style, Laudrup has opted to add a level of fluidity, patience, and passing in the final third. It's worked on the pitch; 27-3-3 is one of the best records of any new manager, with an incredible 82% win percentage.

Thus, due to these results, the board in Madrid have decided to extend Laudrup's one year contract through 2016. He is now earning €90,000 per year, with a reported €500,000 bonus if he is able to guide his side to a UEFA Champions League victory. Many fans are ecstatic with their new hero's decision to stay at the club.

Laudrup himself told the press, "I want to stay here until I achieve my goals, at the very least. This is my first real experience with a big club, and I am enjoying it a lot. My main goal is to take Atletico beyond Barcelona and Real...once I do that, then we can talk about the future."

Verdinho
5 years
Not only do Atletico know how to replace their strikers, they also know how to pick their managers these days. Easy to see why a new deal has come based on last month's form.
Login to Quote

pompeyblue
5 years
It certainly has been an incredible time for Michael at Atletico in these first 7 months, and hopefully the longer contract will give him the opportunity to achieve plenty more glory at the club!
Login to Quote


jason_connolly1987: Damn, it's been a long time indeed! I'm honored that you read my story upon returning!! Any chance we'll see another Jason Connolly Classic this year?

pompeyblue: I really think we could have some great long-term success at Atletico, and this contract definitely gives me the chance to focus more on the job

jason_connolly1987: Well I certainly hope you do, you know how much I love your stories

Inquisition: Thanks pal, means the world to me!
Login to Quote