pompeyblue
5 years
Great player, but with the attitude he was showing, you were right to get rid of him!
Will be interesting to see if you bring anyone in now...
Login to Quote

Neal
5 years
pompeyblue: I think we'll have to bring in a new center back...I have a number of candidates in mind

Walter: We've got a new captain in town now, or, well, erm, really, we have an old one, in the form of SEBASTIAN KEHL!! woot.
Login to Quote 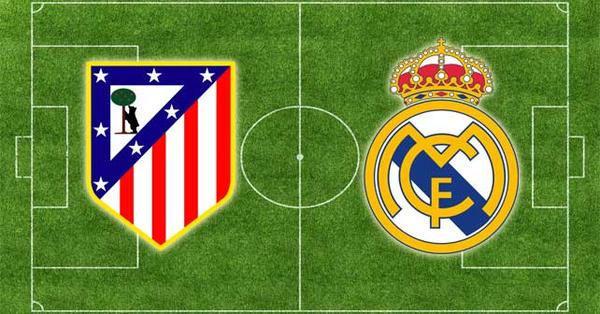 The Derby Madrileno, despite often being cast to one side due to the heated rivalry of El Clasico, is easily still one of the fiercest and, especially last season, one of the most competitive derby matches in the whole of world football. They started off their domestic seasons against each other in the Supercopa de Espana, where Atletico Madrid, champions of La Liga, would look for revenge against Real Madrid, Copa del Rey champions, for the humbling 4-1 defeat in Lisbon last year.

Both teams had a number of debutantes in their starting lineups. Atletico Madrid had a whole new attacking trident, with Alessio Cerci and Antoine Greizmann starting on either side of Croatian hit-man Mario Mandzukic, while Real Madrid introduced Mandzukic's ex-Bayern teammate Toni Kroos and wonder-kid James Rodriguez in for their first taste of Real Madrid football. The full lineups were as follows:

The biggest shock of the evening was that both Cristiano Ronaldo and Gareth Bale had failed late fitness tests to be fit in time for the match, and so Real Madrid would miss both of their two very best players, giving Atletico a glimmer of hope going into this historic rivalry at the enormous Estadio Santiago Bernabeu.

The opening exchanges were quiet, mainly fought in midfield. Michael Laudrup, uncharacteristically, marked his first game in charge of Los Colchoneros with a very defensive mindset, keeping two lines of four behind the ball at all times to try and frustrate Real Madrid creative forces.

As the clock ticked down on the first half, Atletico Madrid saw Los Galacticos starting to lose concentration, and they pounced. Star midfielder Koke hit a beautiful aerial through ball to Mario Mandzukic on the counter attack. The Croatian striker took a half-volley from twenty five yards with no hesitation, only to see the ball ricochet off the post...and straight to Antoine Griezmann to poke home from close range. The Bernabeu went silent.

The second half heralded the arrival of an all new Real Madrid. Ancelotti must've given his team quite the talking to at half time, because right as the whistle blew, the lethargic home team we'd seen in the first half was gone. Replacing them was a unit of eleven men hungry to humiliate their rivals.

Two minutes into the first half, it all went down the drain for Atletico. Center back Joao Miranda barged into the back of Karim Benzema and was shown a second yellow card, leaving his team down to ten men and forcing on nervous youngster Jose Gimenez to center back as Laudrup shifted to a 4-4-1. Frankly, Atleti couldn't handle the onslaught.

On 66 minutes, the home team finally found their equalizer. Sami Khedira laid the ball square for his international teammate Toni Kroos to strike first time from thirty yards, and what a strike it was, dipping and swerving its way into the top right corner, sending the Bernabeu into absolute ecstasy as their new signing scored on his debut. 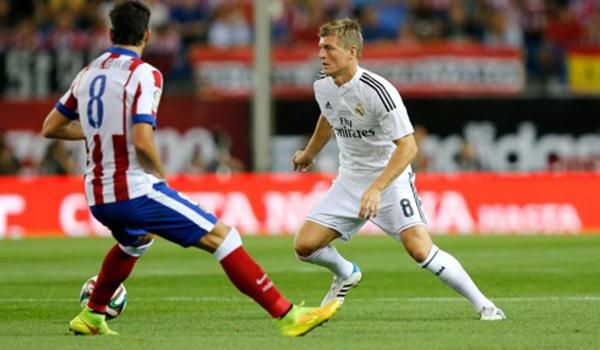 Toni Kroos's wonder-goal against Atletico Madrid has immediately endeared the German midfielder to the Bernabeu faithful, being the catalyst for Madrid's comeback.

Twelve minutes later, Kroos was at it again. This time, the German whipped in a brilliant serve from a corner kick for fellow debutante Mateo Musacchio to thunderously head past Jan Oblak, stunning the 10 men of Atletico and sealing a heroic 2-1 victory for Los Blancos. Two new signings scored and their rivals were defeated.

"Obviously it's a massive disappointment to lose your first game," said Michael Laudrup after the match. "It was a big turning point when Miranda got sent off. However, there is still one more leg to play, in our home, and I promise we will make Real pay."

Verdinho
5 years
We call that Kroos control in our parts

Unlucky in the first leg

No1VillaFan
5 years
WOW, Kroos! I dont comment as much as i should on this story, it is another great story from you Neal and maybe a return to the soty will be on its way, you never know
Login to Quote

Neal
5 years
P-KIDDY: Oh be quiet Carlo, we'll get you lot next leg

No1VillaFan: Yeah it was just a stunner from Kroos, hard to take but a beautiful goal. Thanks for the high praise Jason, means a lot...and yes, that's the goal 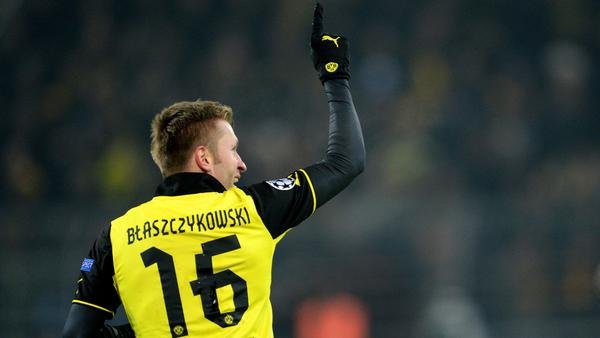 The exodus at Borussia Dortmund has continued. Just a few days after losing club captain Mats Hummels to Spanish footballing giants FC Barcelona, they've now lost veteran winger Jakub Blaszczykowski to Bayer Leverkusen for €10M after the player turned in a transfer request, alongside Hummels. The Polish international has signed a five year contract with Leverkusen worth €55k per week.

"Kuba", as he is affectionately known by the fans at Signal Iduna Park, has been at Borussia Dortmund since 2007, when he joined from Wisla for €3M. Since then, the midfielder, who has amassed 71 caps and scored 14 goals for Poland, has made a full 184 Bundesliga appearances for der BVB. Known for his explosive pace and hard-working mentality, Kuba had become a fan-favorite in Dortmund, and his loss has sparked debate about Laudrup's ability to keep the dressing room.

With players of the caliber of Mats Hummels and Jakub Blaszczykowski wanting out, some are wondering if other high-profile players (namely, Marco Reus, with his relatively low buyout clause) will also want out. Reports out of the Westfalenstadion are saying that Lukasz Piszczek and Pierre-Emerick Aubameyang are unhappy with the recent sales, and may also walk out if Brian Laudrup can't get his dressing room under control.

Leverkusen fans are quite pleased with their new acquisition, however. Having lost their newest bright talent in the form of Karim Bellarabi to Borussia Dortmund, they've now signed their replacement from that very same club. Though he doesn't quite have the sparkling potential of his younger counterpart, Blaszczykowski's experience and undoubted talent will be a big boost to Bayer's chances this season.

Verdinho
5 years
After branding Kuba as a 'Nobody', practically, that's actually a very shrewd piece of business by Leverkusen. Interesting rivalry building up?
Login to Quote

P-KIDDY: Well they've gotten a monetary gain out of it, but I definitely got the better player out of it! It'll be interesting to see how the two players' seasons go, though 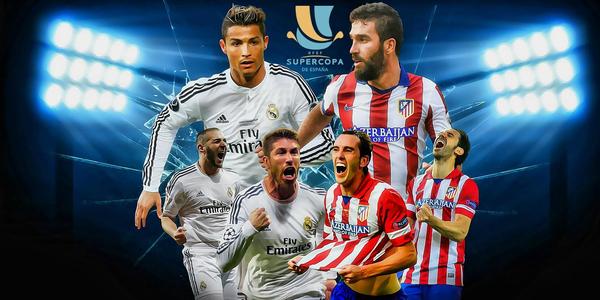 After an action-packed first leg that had everything from controversial red cards to a comeback win to an absolutely stunning game-winning goal, the second leg of the Supercopa de Espana was bound to be an absolute thriller. Atletico Madrid were out for vengeance, and Real Madrid wanted to yet again prove their dominance in the capital city.

Atletico had plenty of reason to be optimistic, though. Despite losing 2-1 in the first leg, they had gotten an away goal, and arguably only lost due to Miranda's red card. Now, they had a very strong chance of upsetting the odds at the Vicente Calderon with a shock win. Importantly for Real, though, Cristiano Ronaldo had passed a late fitness test to start as a lone striker, while Gareth Bale began from the bench. The full lineups were as follows:

Real Madrid lined up a little more defensively than expected, and Atletico took full advantage, leaping out of the gates and attacking from the first whistle. Obviously, Laudrup was displeased with the defensive performance his side had put in during the first leg and was determined to make things right with an attacking, beautiful victory in leg two.

In the 26th minute, Atletico took the lead. Koke whipped in a corner kick, but Sergio Ramos was equal to it and headed clear. The ball fell straight to Guilherme Siquiera, however, and the left back took an ambitious volley on as it came to him. The strike deflected off of Asier Illaramendi and fell in front of Antoine Griezmann in the box to easily dispatch for a 1-0 lead, 2-2 on aggregate with Los Colchoneros ahead on goal difference.

The lead didn't last all too long, however. James Rodriguez was a threat for Los Blancos all game down the left flank, and he scythed apart Atleti's defense with a beautiful long through pass to Cristiano Ronaldo. The Ballon D'Or winner eased away from Godin and Gimenez with his blistering pace before slotting past Jan Oblak to equalize, and thus put his side ahead on aggregate once again.

Nine minutes later, the action continued in a similar vein. Antoine Griezmann, Laudrup's best player so far this season, continued being integral in the attack. The Frenchman's free kick was destined for the top corner, but Casillas read it well and moved across to catch it. Embarrassingly, Spain's number one dropped the ball, allowed captain Gabi to sprint forth and poke home to make it 2-1 and equalize on aggregate. 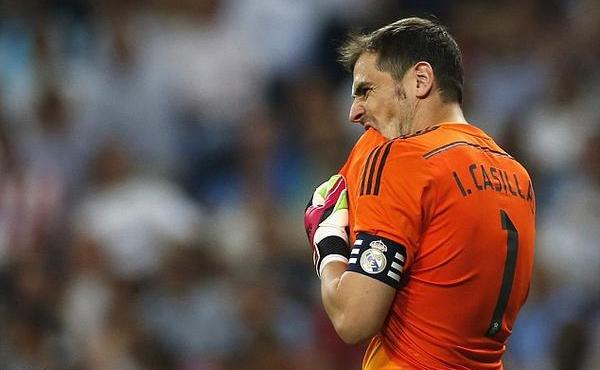 Iker Casillas shocking mistake to let Gabi score let Atletico back into the Supercopa and put further questions on his performances after an abysmal World Cup showing.

The second half passed without much incident, and so the Derby Madrileno plunged into extra time on 3-3 after 180 minutes. James Rodriguez continued to make a massive impact just three minutes into extra time, taking over a free kick from Cristiano Ronaldo. Most fans looked troubled at this, but cast that aside and celebrated when the Colombian's strike gorgeously dipped over the Atletico wall and nestled into the corner, meaning the mattress makers would need 2 goals.

Real tossed Atletico a lifeline in stoppage time of the first period of extra time. Koke's delightful service from a corner kick was bound to find Gabi's head in the box, only for the Atletico captain to be bear-hugged to the ground by Pepe, who had come off the bench. Guilherme Siqueira's goal from the penalty spot was the last kick of the first period to make it 3-2 on the night.

The second period was onslaught after onslaught of Atletico attack, but Real's defense stayed stalwart and strong, repelling their rivals until the last whistle to seal a dramatic 4-4 away goals victory in the Supercopa de Espana.

"Obviously it is very tough when you win the game like this and yet lose the trophy," said Michael Laudrup after the game. "Of course, everyone is disappointed. It is natural to be disappointed after you lose a trophy. However, we can take a lot of positives; we played very well, and we beat the champions of Europe."

Laudrup went on to criticize the away goal rule. "I think it is very unfair that whoever hosts the second leg automatically has a disadvantage in extra time, because the opposition has more time to get an away goal. Extra time should not count toward away goals, we were a bit hard done by. Despite all of this, I am immensely proud of my team, and I know this bodes well for the season ahead."

pompeyblue
5 years
Man, unlucky, no shame in losing to Real like that though!
Great write-ups Neal