The last few years have been rife with superstar Brazilian youngsters becoming overnight YouTube sensations before making big-money moves to Europe to either make good on their potential or be the next big flop. We've seen it all, from the likes of Robinho and Alexandre Pato up to the phenomena that are Neymar and Thiago Silva. Now, a new star is rising.

Already being hailed "the next Neymar", 18 year old Gabriel Barbosa is making headlines in his home country. He has scored 8 goals in 16 appearances in the league so far this season and has scored his first goal for the Selecao, bringing him well and truly into the worldwide spotlight.

The scouts say he has it all. The young left-footed maestro has the touch, the dribbling, the passing, the physicality, and the coolness in front of net needed to be successful in the big leagues in Europe. Despite his tender age, he has already racked up 58 league appearances at Santos and scored 18 goals. 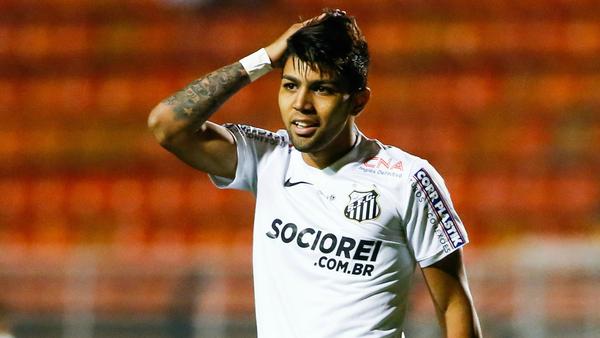 Gabriel Barbosa could be the new Brazilian superstar in attack, and while many fans compare him to Neymar, most pundits say he could be the heir to Ronaldo.

All of this has caught the interest of Atletico Madrid's Danish manager Michael Laudrup. Impressed by Gabriel's talent, the Colchoneros boss has agreed a €22M fee with Santos for their prized attacker, and the player has put pen to paper on a five year contract.

Barbosa has been brought in to replace the outgoing Mattia Destro, who made an unprecedented €60M move to Paris St.-Germain earlier this week. The Brazilian will have big shoes to fill since Destro finished as the Mattress Makers' top scorer last season, but most fans truly believe he is up to the challenge.

Gabriel Barbosa has a long way to go yet to make good on his potential and prove to the world he can be as good as the Ronaldo's and Neymar's that came before him, but with this big-money move to Atletico Madrid now complete, the starlet is certainly on his way.

Feliks
5 years
You're lucky his bastard of an agent didn't get in your way, I tried buying him for £13m, succeeded, and then his agent bumped it up to £35m....
Login to Quote

Neal
5 years
Feliks: The agent actually still owns like 40% of the player, I didn't have the funds necessary to purchase the remnant of Barbosa. However, this hasn't actually impeded me in any way, so I'm not complaining

Arvind K: A legend in the making

Tallery
5 years
Barbosa. Played him in my Brazil save (before it crashed and corrupted) as a F9, and he was wonderful. Good signing
Login to Quote

Neal
5 years
Tallery: Thinking of using him as an Advanced Forward or Poacher, but we shall see

The Supercopa de Espana is the annual curtain-raiser on Spanish football, played over two legs between the winner of La Liga BBVA and the Copa del Rey. With Atletico Madrid having won both competitions last season, they were set to take on FC Barcelona, the runner-up of the domestic cup, in this two-legged final.

The first leg took place at the Camp Nou with a full house of just under 100,000 seats being sold. The biggest story was that of Thiago Alcantara, recently returned to Spain from Bayern Munich, who was set to take on his old club of FC Barcelona. He, along with new signing Gabriel Barbosa, started on the bench for Atletico. The full team news was as follows:

It was Atletico who were out of the blocks fastest, much to the surprise of the Blaugrana fans who were hoping for an improved performance from last year's cup final loss. Just 9 minutes in, Antoine Griezmann received the ball at the top of the box after a corner kick. The Frenchman's shot was saved by Bravo, but the rebound was put home by Miranda. The Atleti celebrations were cut short, however, by the offside flag.

Atletico continued dominating the game, however, and eventually found the breakthrough a little over 30 minutes into the match. Marauding fullback Juanfran had gotten forward and whipped in an excellent cross, and Mario Mandzukic delightfully headed the ball into the top corner while leaping backward to give his side a 1-0 lead.

Just as half-time approached, Barcelona got their equalizer. Jordi Alba had found Rafinha in loads of space at the top of the box. The young Alcantara jinked his way past Saul Niguez and rifled the ball into the bottom corner, leaving Oblak no chance and making it 1-1 as the sides went into the dressing rooms for half time.

On the hour mark, Barcelona pressed their momentum. This time, superstar Lionel Messi was at the heart of the attack, dribbling forward like a praying mantis in tall grass, whisking himself past defenders like they weren't even there. The Argentinian legend chipped the ball in behind for Brazil counterpart Neymar, who calmly slotted home at the near post to complete the come-back and make it 2-1. 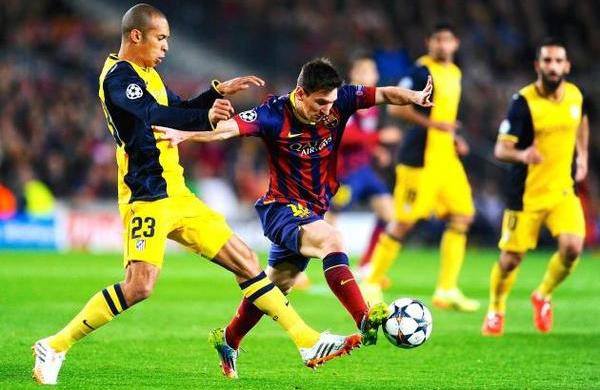 Miranda had great difficulty handling Lionel Messi all night, but Atletico's attack showed just as much prowess as the Argentine maestro on their end.

Five minutes later, the game turned on its head. Marc Bartra crashed into Mario Mandzukic from behind as the Croatian striker attempted to bring down a long ball, earning the young defender his second yellow card and an early shower. Down to 10 men, Barcelona were forced to drop off, and Atletico did not wait to seize the initiative.

With 15 minutes to go, los Colchoneros were stringing together loads of passes in the enemy half, and eventually the ball found Juanfran open yet again on the right flank. Yet again, the fullback's cross was stellar, and, yet again, Mario Mandzukic was there to head the ball in off of the post for the equalizer. 2-2, but Michael Laudrup's men weren't done there.

As the time ticked down and injury time approached, it seemed the two sides were headed to an exciting 2-2 draw. Thiago Alcantara and Gabriel Barbosa had come on, but neither had made a large impact...yet. Juanfran, undoubtedly one of the best players on the pitch that night, broke forward down the right in the 92nd minute and found Barbosa open in the box, whose shot deflected off the post, off the back of Claudio Bravo, and in to give Atletico a stunning 3-2 last-gasp victory in the first leg.

"What a fantastic match," Laudrup told the press after the game. "End to end, two comebacks, but the most important thing is that we won and got three away goals. We are in fantastic shape for the second leg back at the Calderon."

Oz96
5 years
Juanfran has been fantastic for you, so has Super Mario and Gabigol. Greatly reviewed first leg and well done on the score.
Login to Quote

Justice
5 years
Bravo on the win, Bravo!
Login to Quote

Oz96: Thanks Oz, and yeah Juanfran was actually spectacular, Man of the Match for me. Between Mario and Gabriel up top, we look well-stocked indeed!

Justice: Poor ole Claudio with that own goal

NYWBOY_LFC: Not lucky, more like raw talent from Barbosa