Justice: I was playing some youngsters at the back, k.

mo_123: Yeah that kind of strange, but otherwise as you say things went quite well!

pompeyblue
5 years
I'm disappointed Neal... I mean, you only scored 8 goals against Rayo Majadahonda, you better up your performances

Okay, let's be honest, you're gonna rip Spain to shreds this year, aren't you?

Neal
5 years
pompeyblue: I know, Rayo really held me up didn't they

The 24 year old attacking midfielder has made the swap from Wolfsburg to Borussia Dortmund, signing a five year contract worth €125k per week with der BVB. 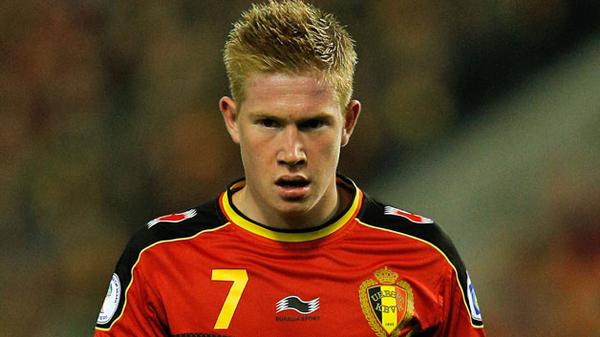 Just four days after selling Henrikh Mkhitaryan to Paris St.-Germain for a club-record sale of €50M, Borussia Dortmund has found their replacement. Belgian playmaker Kevin De Bruyne from fellow Bundesliga side VfL Wolfsburg has made the trek to the Westfalenstadion and signed a five-year contract with der BVB and could be the team's next big star.

Kevin De Bruyne rose to stardom at Genk in his native country of Belgium before being snapped up by Chelsea. Things didn't ever quite work in out in England, but after a stupefying loan spell with Werder Bremen where the then-youngster scored 10 goals, De Bruyne was given a big-money move to Wolfsburg. It is here that he has really established himself as a star, scoring 10 goals and adding 13 assists last year.

De Bruyne has also become a bit of a national hero after the 2014 World Cup in Brazil. The midfielder assisted Maroune Fellaini's equalizer against Algeria in the country's opening game and was named man of the match. He also scored and assisted in extra time in the Round of 16 to defeat the United States. In total, De Bruyne has amassed 29 caps for the national team and scored 6 goals.

"I'm very excited to play my football at the Signal Iduna Park this year," the Belgian told the press at his first press conference. "There is a really good project here, and I think we are amassing the quality to take down Bayern and be a European force."

De Bruyne could make his debut in two days in the DFL-Supercup against Bayern and try to stake his claim in the first team against Japanese playmaker Shinji Kagawa.

LFC
5 years
Brilliant signing, not too bad a fee either. That net spend...
Login to Quote

pompeyblue
5 years
An excellent addition to the Dortmund squad... I'm sure he'll make a big impact!
Login to Quote

Justice
5 years
A wonderful, versatile signing. He can be your playmaker, your goalscorer, your pivot, your set-piece maestro, or anything else you need him to be. Build a team around his strengths, but what is he not good at?

Walter
5 years
A fine replacement for Mkih Mouse (is that what Paddy called him?!)

And you've made heaps of profit, 'Banker Brian'
Login to Quote

Feliks
5 years
Great move for a very nice fee, De Bruyne is a beast on FM and with that 30m euro gap between him and Mkih, he'll have not nearly as much pressure to perform.
Login to Quote

Oz96: He's a brilliant little footballer that has really come into his own at Wolfsburg, I hope he keeps it up!

Justice: Well...he's only got 7 tackling

Walter: It was "Mkhi Mouse" actually! Now stop with the alliteration, weakling Walt

Feliks: It's an all around great deal of business The DFL-Supercup is the annual curtain-raiser on domestic German football, pitting the winner of the Bundesliga against the champions of the DFB-Pokal. This year, the match will play host to two of Germany's biggest rivals; FC Bayern Munich, last year's champions, and Borussia Dortmund, last year's losers in this fixture.

Both sides will hope to start their years with some silverware. Though Bayern have gone with a surprisingly young and inexperienced lineup, more surprise lies with Dortmund. After a poor preseason, Mauro Icardi starts on the bench, and with Munir injured, Kevin Volland has gotten the nod up top. Kevin De Bruyne, signed two days ago, has had to make do with a spot on the bench. Let's take a look at the full lineups:

Borussia Dortmund were undoubtedly the more aggressive side out of the gates. Der BVB dominated possession and were playing most of the game in Bayern's half. Gundogan and Sahin were getting far too much time on the ball and were easily dictating the tempo of play; Hojbjerg and Gaudino simply did not have the experience to deal with their counterparts.

Within ten minutes, Dortmund had won their first corner. Nuri Sahin whipped it into the near post to meet the head of Sokratis Papastathopoulos, only for the Greek's header to strike a leaping Thomas Muller in the back. The bounce fell kindly for Ilkay Gundogan, however, who had no trouble making it 1-0 to Dortmund from close range.

Thirteen minutes later, Bayern looked to reply. Finally starting to grow into the game, Swiss starlet Xherdan Shaqiri burst down the flank and deftly slipped in Pierre-Emile Hojbjerg. The teenager was outfoxed by Roman Weidenfeller, however, and the goalkeeper smartly denied the onrushing Dane. 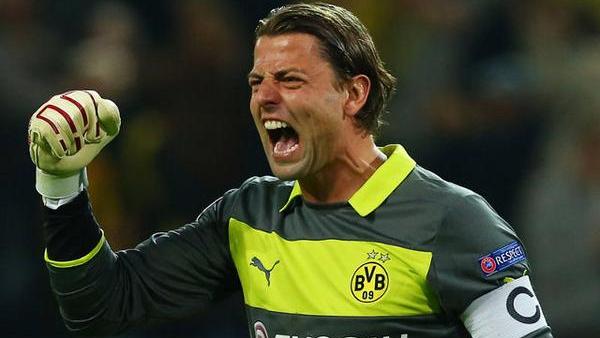 Captain Roman Weidenfeller masterfully conducted his side's defense during the Supercup, ensuring that the usually rampant Bayern Munich could muster just one shot on frame.

The teams went into the break with der BVB ahead, and Shinji Kagawa nearly doubled Dortmund's advantage after the hourmark. Volland, Reus, and the Japanese international engaged in beautiful interplay just outside the Bayern box to slip the latter in on goal, only for Pepe Reina to make an outstanding kick save to keep the game close.

Four minutes later, however, Borussi got their second. Marco Reus was the main culprit, drawing a foul from Jerome Boateng before swerving the ensuing free kick over the wall and into the top corner, leaving Reina no chance and giving his side a crucial 2-0 lead over Bayern. With the game sealed, the likes of Mauro Icardi and Florian Thauvin were given debuts from the bench in the final twenty minutes, though De Bruyne did not appear.

The final score was 2-0 to Borussia Dortmund, and the final whistle sent the Signal Iduna Park into raptures. This was vengeance for last year's penalty loss in the Supercup, and the side in black and yellow look poised to keep on winning and give their rivals a real run for the Bundesliga this year.

Walter
5 years
You don't know how happy this makes me feel.
Login to Quote