As great as they were at the football, the Laudrup brothers were hardly known for their signing voices, but they managed to join together in a hearty chorus of "Happy Birthday" for their father. It was Finn's 70th birthday, and the ex-Danish international was ecstatic to have his two famous sons joining him for the day.

The three ex-footballers were sitting around the table at the family house in Denmark, and Michael was cutting some slices off of a chocolate cake in the center.

Finn began speaking, in a soft, rambling manner. "I'm so glad you boys could come today. I know it must be very busy for you two."

"Nonsense, Isä," Brian replied animatedly. "We wouldn't have missed it--"

His father continued speaking, however, as if he hadn't heard his son. "It's especially good to see you, Michael. Brian's been good, he's come to visit often, but you are always busy with your football."

Brian and Michael exchanged quick frowns, but resumed their smiling demeanors before their father saw anything. "It's good to see you, too," Michael replied.

"Brian, maybe you ought to follow Michael. Management is good fun, you'll enjoy the challenge."

Brian's smile faltered again, and this time he could not restore it. "I have, Isä, remember? I coach Borussia Dortmund now."

Finn chuckled and shot back with surprising force for his age, "Bahh, get off Football Manager, boy! You've got no tactical experience, you'd fail miserably at anything like Dortmund. Start small, here in Denmark! I can help you, of course."

Michael couldn't help himself and pipped in, much to the amusement of his father, "He'd be rather poor, indeed, wouldn't he? Best stay to punditry and not get out of your depth, Brian."

Brian's knuckles whitened around his fork as he took a slice of the cake and began to chew, swallowing any retorts he'd prepared to keep things civil at his father's birthday.

"I'll be right back, boys, need to use the bathroom quickly." Finn stood up slowly and hobbled away, and Michael shot a devilish grin at his brother.

"Get off Football Manager, Brian!" he chortled. "Even da knows you're shit, and he's forgotten you actually manage!"

"Shut up, Michael," replied the younger brother with a more serious tone. "His Alzheimer's is getting worse. I'm starting to get worried."

Michael began to form a response, but quickly stopped and smiled at his returning father. The smile quickly slipped off his face, however, as he saw the look of terror on Finn's face.

"Michael...Michael? Who is that man in our house? Why is he eating my cake? It's my birthday!" The old man's complaints rose from a whimper to a hoarse shout.

Michael sighed, and gestured, "Come on, Brian. Step out for a while, I'll let you know when he's better. His favorite son will be able to handle him for now."

Brian rose abruptly. "You cocky bastard. Maybe he doesn't remember me now, but he'll be ashamed that he ever remembered you once he finds out about the shit you've done to him, to his money, to this family."

Brian stepped out quietly, slamming the door behind him, leaving his father confused and afraid with his stunned brother.

The candles on the cake flickered, and the flames died.

Walter
6 years
Well Michael is a bit of a ***kwit

Poor Brian, hopefully he comes back and reks Michael.
Login to Quote

InvertedWingbacks
6 years
nothing like a family feud to add some spice!

pompeyblue
6 years
Michael, you're one disrespectful son of a biatch! Here's hoping Dotmund take on Atletico at some point soon, the Brian can teache his brother a lesson...
Login to Quote

AudereEstFacere
6 years
Hi Neal.. Have read your stories for a while and just killed this one.. Your stories are really great, and your writing is very simpel, but elegant. It just works so good. KIU!
Login to Quote

Neal
6 years • Edited
Feliks: Nothing like a bit of drama!

Walter: Vengeance is certainly hot on the mind...

Orkodk: Fixed that, my bad entirely. I think it's because the father's name is Finn that I was thinking Finnish instead of Danish

pompeyblue: He's a bit of a twit, isn't he...we shall see what happens.

AudereEstFacere: Wow, thanks very much my friend! Glad to know you are liking this so much, I hope you continue to follow and enjoy

After an end-to-end spectacle of a first leg, things were delicately poised going into the Supercopa de Espana second leg in Madrid. The Vicente Calderon was set to host FC Barcelona, still licking their wounds from a last-minute 3-2 defeat back on their home soil and knowing that anything less than a win would ensure that Atletico Madrid would take home the trophy.

Atletico Madrid went with basically an unchanged lineup, but Laurent Blanc decided to make quite a few changes to his XI. Youngster Patric, Jeremy, Matheiu, Alex Song, Sergi Roberto, and Sergi Samper were all introduced to the team in hope to swing the second leg to La Blaugrana. The full team news was as follows:

Atletico Madrid seemed to benefit greatly from having the same players out on the pitch and opened with fluidity in attack. Koke, Gabi, and Saul controlled the midfield, perhaps the most vaunted Spanish midfield trio in today's world football. The early shots came thick and fast from Mandzukic and Griezmann, but ter Stegen was equal to both.

On the half hour mark, Los Colchoneros made good on their pressure. Saul Niguez pinged the ball into the feet of Croatian target-man Mario Mandzukic. The striker laid the ball off first time to the onrushing Alessio Cerci to curl into the top post, giving his side a 1-0 lead on the night, 4-2 on aggregate.

Just ten minutes later, however, Barcelona struck back through an unlikely source. Los Cules had won a free kick out on the left flank, and Brazilian startlet Rafinha Alcanatara went out wide to take it. He whipped in an excellent cross for Alex Song to header home, making things 1-1 at the Calderon and bringing the aggregate score back to within one goal at 4-3. 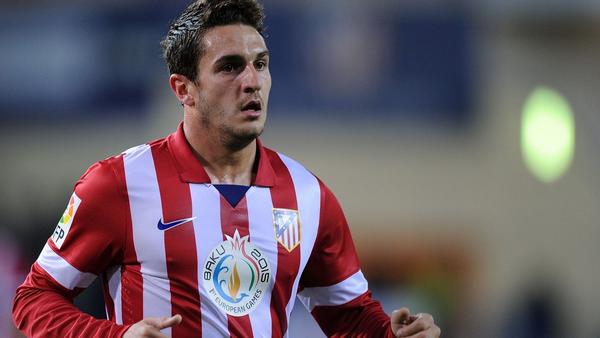 Koke was the man of the match, completing 81 passes and pitching in an assist in his side's dominance of Barcelona, contributing to the team's 22 shots and 63% possession.

In the second half, Rafa's brother struck back off of the bench. Koke Resurreccion played a beautiful cross into the top of the box from the right flank, and Thiago Alcantara executed a perfect looping header against his old club to put his side back in the lead at 2-1. With aggregate at 5-3 and Atletico now with a firm handle on the game, the end was near for Barca.

The game finished with that score, and the 54,000 fans inside the Vicente Calderon exploded into cheers at the sound of the final whistle. Yet again, their side had defied all the odds and defeated the mammoth to win the Supercopa de Espana, a first piece of silverware in a potentially super-successful season.

"I am very excited," a visibly pleased Michael Laudrup told the press after the match. "It is always a big moment to bring a trophy back to the fans, and we did that. Now we have set the standard for the season, and that is to settle for nothing less than winning. Bring on the season; Atletico is ready."

Zap
6 years
You won! Woo! Good luck for the season.
Login to Quote

mo_123
6 years
Good win in the super cup. Some sibling rivalry going on as well.
Login to Quote