Aston Villa have had a weird month again but have stayed in touch with the top 6 even though losing two of the four matches.

The month started amazingly well though with the victory against Chelsea. Goals from Fabian Delph and Andi Weimann sunk the side from London and they performed so well. The first goal from Delph was a screamer of a strike. He picked the ball up from a Grealish pass and unleashed a fantastic drive from 25 yards out to make it 1-0.

Weimann then scored a headed goal from a corner to finish it off. We played fantastic football today and we thoroughally deserved our victory. I can not wait to get to the next match! Said Paul McGrath.

Gabby Agbonlahor then scored in the next two matches, the Everton goal was from all of 60 yards out. Everton though went on to win the match 4-1 but he got the best goal of the match. They then lost 2-1 to Arsenal too but in both matches the Villa youngsters did everyone proud and the Villa fans are really getting behind everything that McGrath is doing at the club too.

We have a very, very, very young squad of players and I will get the best out of them. We are really trying hard to stay in the top 10. To be just 4 points off 3rd place is absolutely unreal and we need to stay focused and keep our key men fit for the rest of the season said McGrath. That came after the 2-2 draw against against West Ham, where Aston Villa let two goals in, in the last 10 minutes to undo such a great performance from the Villans. Ruben Garcia, who was making his debut, put in a man of the match performance when he scored one and assisted in Samuel Eto'o's 2nd goal. Garcia, a new signing from Levante looked super assured on the ball and his ability to cross was absolutely fantastic. 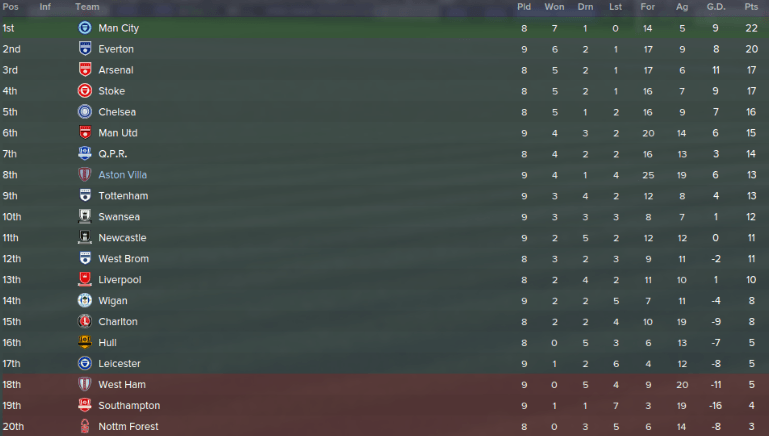 After all of the excitement this month, Villa are still doing OK in the table, they are the highest scorers in the Premier League and are only 4 points of 3rd placed side Arsenal. Stoke and Everton are having good starts and also a shout out to Charlton for being in 15th at the moment. Man City are top, with Liverpool having a shocking start down there in 13th place. 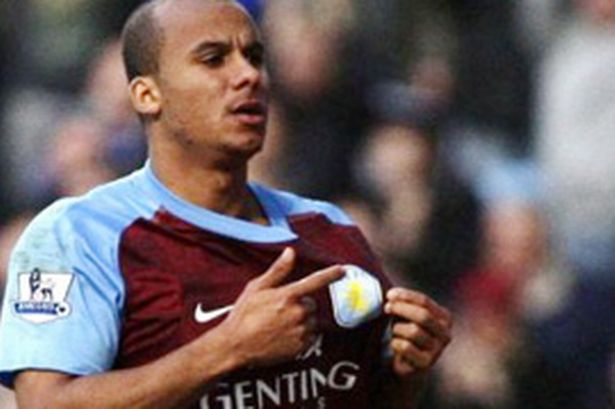 Gabby Agbonlahor has really excelled under Paul McGrath, and although Tom Cleverley has got the England call up again, Agbonlahor must be knocking on the door for the call up again. It is a big month upcoming for Agbonlahor because Hodgson is attending more games to do with Aston Villa now but if he keeps up this sort of form he will no doubt get back into the England fold soon.
Login to Quote

Jamesg237
5 years
That is a pretty poor month. However, still being in the top half is great and hopefully you will get back on form next month.
Login to Quote

No1VillaFan
5 years
Jamesg Yeah, hopefully we can kick on
Login to Quote

The Doug Ellis Stand is set to be refurbished

Ever Mario Plattner bought Aston Villa in October, he promised fans of Aston Villa that he would invest in Aston Villa's infrastructure and he has kept his word by announcing plans to improve the clubs youth facilities and the stadium.

Villa Park usually holds 42,000 but the announcement will see the stadium be expanded to 47,000 for the start of next season. The Doug Ellis stand is going to be expanded by 5,000 seats to start with but Mari Lindenburger said this is just the start. There is a long term plan to make Villa Park an 80,000 seater stadium and we can not wait to implement our plan of action. 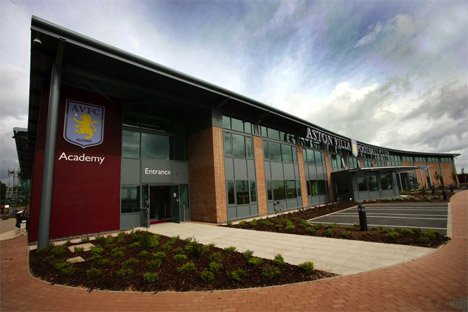 Bodymoor Heath is also in line for a refurbishment

Also getting updated is Bodymoor Heath. It is already one of the best training and youth complexes in the country, so the fact that Plattner is looking to improve the club as a whole can only be seen as a good thing.

Icarus
5 years
I also love Ruben Garcia, great cheap signing. Too bad about the losses, it'll take some time again before you crush those top table teams with such a young team.

Grats on the new Chairman! That means more cash 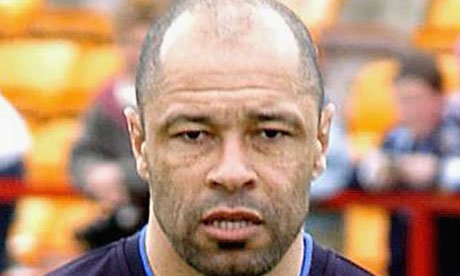 Paul McGrath is the guy that new chairman Mario Plattner wants to take the club forward and he has been rewarded with a new deal and a bumper pay rise to oversee this Villan transformation. The man that Villa fans call GOD has signed a new four year deal worth £71,000 a week.

Aston Villa have had a great season this season, and although they find themselves in 11th place at the moment they have done well to recover from the start of the season when Swindon Town had defeated them in the Capital One Cup but Paul McGrath bought well over the summer but bought young this summer and it is starting to pay off now and he has been rewarded.

I am very happy to be staying at this great club and with the owner's new vision, I can only see exciting times here in the future. I have been promised money to spend in Janaury and I fully expect to spend it. I have my targets in mind already and I can not wait.
Login to Quote

TonkaWolves115
5 years
Congrats on a new contract - very much deserved!! Your doing a great job at Villa.
Login to Quote

Jamesg237
5 years
Big congrats on the new contract. Got to repay their faith now though and get the club up the league table.
Login to Quote

TonkaWolves Thanks, I am very happy with my new contract

Grealish: I Had To Go With My Heart When Jack Grealish came through the Aston Villa ranks, I am sure he would have never thought that both England & Ireland would want his services in the future. This was a just a lad, who was born in Solihul who would become one of the hottest talents in the Premier League. At the tender age of 16 he was a unused substitute in the Premier League against Chelsea in March 2012. Grealish was however part of the club's under-19 team that won the 2012/13 NextGen series.

In 2013, he went out on loan to Notts County and was one of the there star performers hitting 5 goals and seven assists in 38 appearances. At the end of his loan with Notts County, Grealish returned to Aston Villa and made his debut on 7 May 2014, coming on as an 87th-minute substitute for Ryan Bertrand in a 4–0 away defeat to Manchester City in the Premier League.[13]

In May 2014, Grealish played in the Hong Kong Soccer Sevens, he finished as top scorer with six goals as Villa won the Shield title. On 16 August, Grealish made his second appearance for Villa coming on as a 71st-minute substitute in a 1–0 league win against Stoke City. With his contract due to expire in the summer of 2015, he was offered a new four-year deal by the club in September 2014. On 14 October 2014, Grealish signed a new 4 year contract with Aston Villa.

Conversely, as a consequence of his nimble movement, Grealish has notably been on the receiving end of heavier, more physical challenges from opposing players. Shaun Derry, his former manager at Notts County, highlighted this following fixtures against Sheffield United and Stevenage in early 2014 and called for more official protection. In a 2014 match for Aston Villa against Hull City at Villa Park, a number of fouls committed against Grealish resulted in three Hull players receiving yellow cards within just a 15-minute period.

Grealish has also appeared to not wear shin pads whilst playing. However, it was later revealed that he opts to wear child-sized alternatives to maintain his ability to control the ball effectively. He had an amazing season last season, where both England and Ireland were after him to play for them.

It was a long hard decision but I spoke to my family and they advised that I would get better playing time if I went with Ireland but had a great chance to win something with England, however I decided to plump for Ireland. They are another upcoming nation and the manager and the football association wanted me more so I am happy to announce that I will be representing Ireland.

It is understood that Jack Grealish will make his debut for Ireland against Georgia on Friday 4th November.
Login to Quote

Bosola
5 years
shaky start , but i loved going through the pages, gl man
Login to Quote