This story takes place in Finland. You didn't expect that did you? I chose my local team and will pursuit as much success with is as possible while also trying to raise the level of Finnish football overall.

The development of the story will be updated in this thread, but I will also stream the progress on twitch. Mainly on weekends. So if you will find this story interesting do follow:

An now moving on the the main event!

The Rise of a Nation - Finnish Funk


It's a dark december morning in central Finland. The city of Jyväskylä is still asleep - except for a few students who decided to take partying to the next level. The pitch at Harju stadium looks less like a football pitch an more like a field that was raided with coconut slushies.

Not everything is peaceful though! At the JJK headquarters a takeover is brewing. Manager Juha Pasoja has decided to resign after fixing the clubs finances.

Pasoja stated that "I believe my financial knowledge has helped the club forward. I'm also aware that there are more capable managers out there to improve the quality of our performances."

The man to take over the team is a local former sunday league footballer Wild Mushroom, commonly known as shroom. Mr. Shroom stated that his love for the club will compensate for his lack of managment history.

"I am excited that I have been trusted with this position. We will continue the great work Juha started here and hopefully take the club to new heights." - Shroom 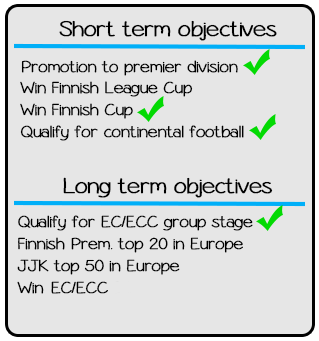 Justice
6 years
Well this certainly will be an interesting challenge! Your opening post is very nice, good luck!
1
Login to Quote

The media can think what they want to. We will fight to get promoted straight back to the premier league! - Mr. Shroom 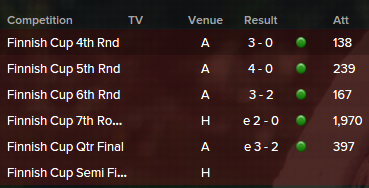 Great start to the league! 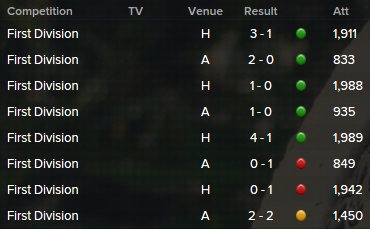 walkinshaw
6 years
Nice start in both competitions mate but damn those long term goals are going to be loooooooooooooong lol.
Login to Quote

sieninen
6 years
walkinshaw : FM13 and 14 I managed to make it to the Champions League Group stages in 4 to 5 years. We'll see how it goes this time!

I believe it will take longer this time around though.
Login to Quote

Half of the season behind us - all of the hard work yet to come!


"It has been a productive half. We should've by now learned from our mistakes and hopefully we can improve in the second half of the season." - Mr. Shroom

The team has been struggling with quite a few injuries. The results have been kind of on and off. Especially the 1-2 loss at home agaist Viikingit was a bitter blow to the title hopes of the squad.

We take the good and the bad in the league

Title hopes are still alive going into the 2nd half

Most efficient players so far 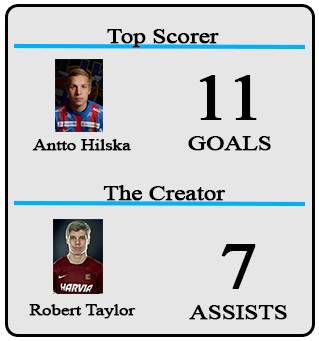 walkinshaw
6 years
You've dropped a couple spots but still right in it half way through mate.
Login to Quote

Let's look at how we play!

Our main objective is making the game as easy as possible for the goalkeeper, hence the three central defenders." - Mr. Shroom 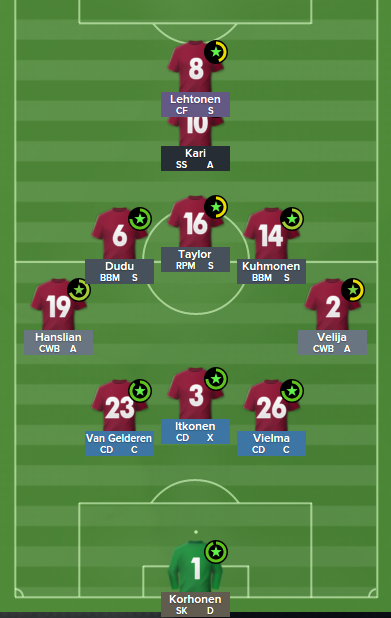 "This formation gives us the wanted safety in defense while also giving us the much needed options going forward." - Assistant Manager, Kalle Turunen 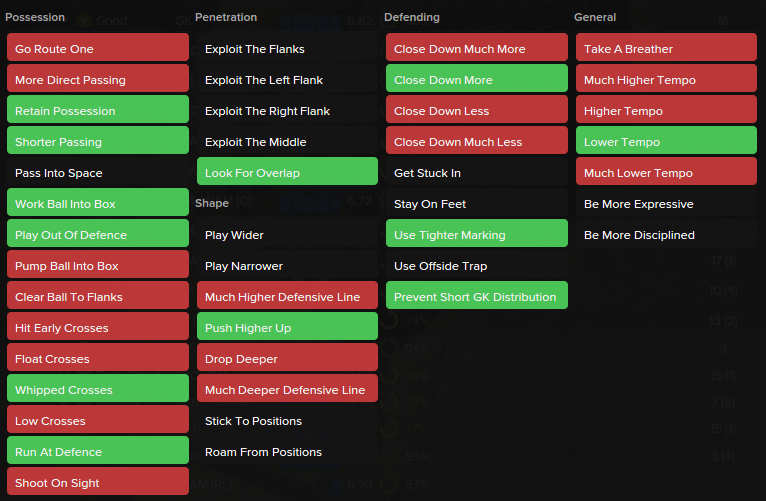 We feel that the more we are on the ball the better our chances at winning are. This is why we seek to retain posession with a pationt short passing game. We also aim to quickly regain posession in midfield when the opposition has the ball." - Director of Football, Tapani Korhonen
Login to Quote

Aaron
6 years
Your title amuses me very much. Good luck

I'm glad that my idiotic ideas amuse at least someone.
Login to Quote

Can we get promoted???

"It has been an incredible season so far. We have two huge games agains title contenders FC Haka which we will have to win to keep the promotion challenge alive!" - Mr. Shroom

Did we do it? Was out final push enough? Here are the fixtures! 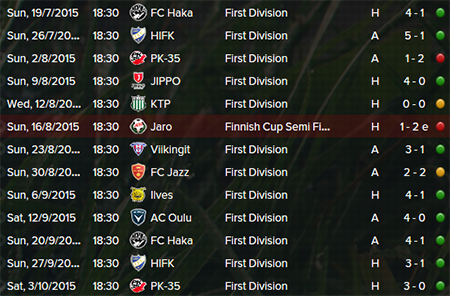 "Out of the 14 last league games we only lost one. It has been an impressive season and the final run of results was absolutely incredible!" - Assistant Manager, Kalle Turunen

But was that run of results enough to get promoted?


"It was an absolute epic. Sometimes I had my doubts but the guys came through for us in a brilliant manner! Everyone should be over the top proud of this achievement!" - Mr. Shroom

"I would love to thank the entire squad, but special thanks will go to our captain Tommi Kari who will be leaving us after the season is over. He has been an incredible servant and this seasons success is very much down to his efforts in attack." - Mr. Shroom 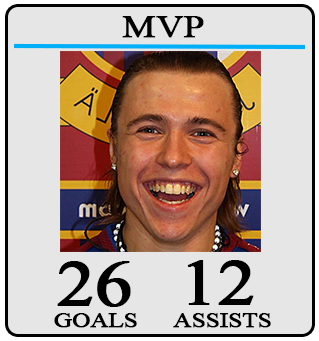 
"He should have not left... That was the worst decision any footballer could make." Mr. Shroom on Tommi Kari leaving for IFK Mariehamn after winning the Finnish First Division with JJK

Tommi Kari's face when he realised his mistake: 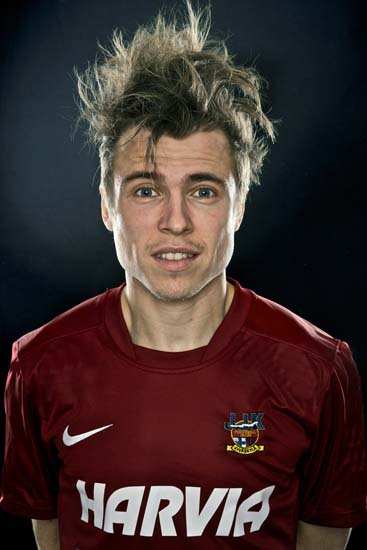 "He was our long term captain. I hope he will rot in hell after we destroy IFK Mariehamn next season and they get relegated." - Assistant Manager, Kalle Turunen
Login to Quote


"I am happy to announce that we have dicided to turn fully professional. This will help the team going into our first season back in the Premier League. We have also approached Mr. Shroom to sign a new three-year-contract and are happy to announce that he will be staying with us for years to come." - Chairman, Lassi Hietanen

"I am delighted with the board and my new contract. This decision will aid me in taking the club to the next level. Our finances are great which was not the case when JJK last competed in the Premier League." - Mr. Shroom

"The highlight of this transfer window was of course our "loyal" captain Tommi Kari leaving the club. We also lost several hot prospects so big changes were needed." - Mr. Shroom

"We are delighted with the player we were able to bring in. This should give us a good chance of reaching our goals in the upcoming season." - Assistant Manager, Kalle Turunen
Login to Quote

League Cup roundup - What an effort! 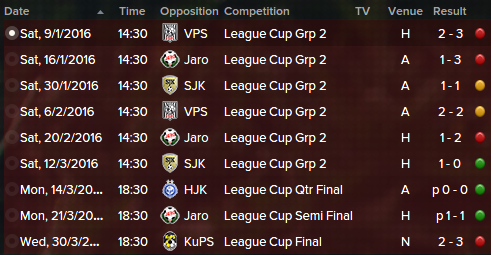 The team gave it everything to be competitive and in the end, they succeeded. It was a difficult start in the group stage but the playoff were terrific! Winning the Finnish champions HJK was a real highlight.

Teppo was playing in both the QF and SF against HJK and Jaro. The efforts in the penalty shootouts helped the team all the way into the final where the experienced goalkeeper Janne Korhonen was the one between the sticks.
Login to Quote


"Everyone's excited. We had a great League Cup that ended in the final. We are ready to go and very confident of retaining our position in the Premier League." - Mr. Shroom

An so it begins! How did we do? 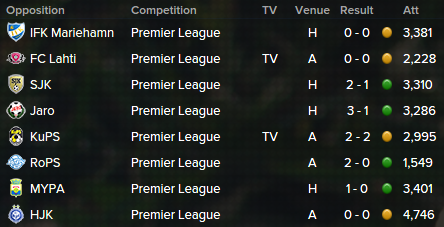 "The start to the season has been absolytely incredible. We are the only team that has not lost in the first eight games. The large amount of draws is something to attend to but otherwise we are in incredible form!" - Assistant Manager, Kalle Turunen

And then there's the cup! Huge results!

"We started in the 7th round of the cup. Both games so far have been difficult, especially the one against HJK. It was an incredible result!" - Assistant Manager, Kalle Turunen
Login to Quote