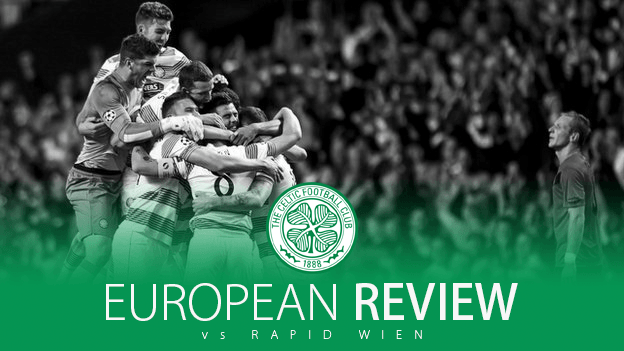 Having beaten Lithuanian side Zalgiris comfortably in the last round, Celtic drew Austrian outfit Rapid Wien in the next

Celtic drew possibly the toughest team in the draw, and would have to play well to beat them to progress to the Play-Off round, where teams such as Manchester United await them. 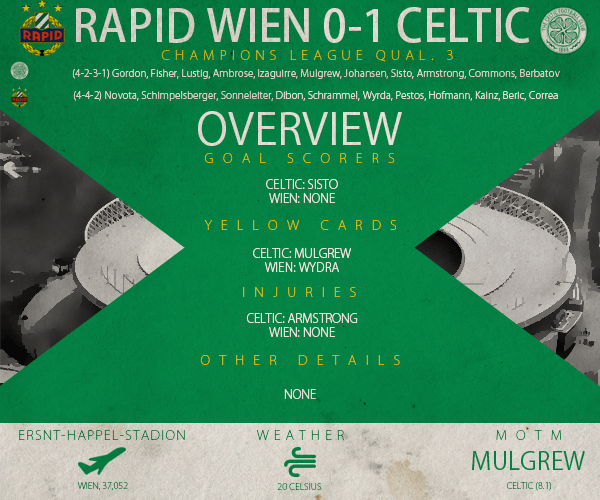 Celtic had to cancel their last pre-season friendly – a trip to Pescara – in order to play this game; not that they would mind – as the Scots came away with a 1-0 win. Celtic dominated the game, knocking on the door with regularity, with only Wien’s goalkeeper stopping them from finding the net. However, it only lasted until deep into the second half, with a set piece practised on the training ground being used to full effect – the corner being whipped in by Johansen found Mulgrew who knocked it down to Sisto, who hit it into the bottom corner on the half volley to give Celtic the away goal and the win to take into the second leg. However, Stuart Armstrong picked up an injury that would keep him out of the second leg, much to the displeasure of Ronny Deila. 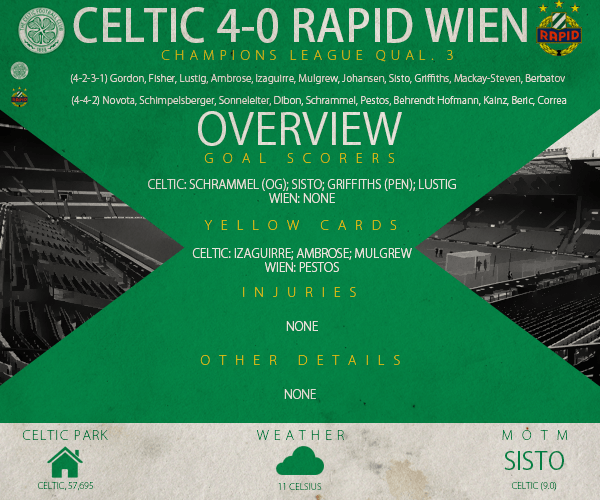 The first 30 seconds set the tone for the second leg of Celtic’s tie with Rapid Wien, with the Glaswegians nearly coming close to breaking the deadlock straight from the kick-off. The game had its first goal in the fifth minute, with a cross hitting Wien defender Schrammel and rolling past the keeper. Pione Sisto then added to the tally ten minutes later, before a penalty in stoppage time during the first half was netted by Leigh Griffiths. Lustig then got the fourth during the second half, netting the rebound from a freekick to give Celtic a comprehensive win, and making their place in the playoff round set in stone.

The draw for the Play-off round will occur in a few days’ time, with possible opponents that Celtic could face being Vardar of Macedonia, AS Trenchin of Slovakia, Maccabi Tel Aviv of Israel, Skenderbeu Korce of Albania or HJK of Finland.
Login to Quote

MinusZ3R0
4 years
Just caught up with this and boy it's great! So much detail and those graphics are stupid good! I need to have your skills with graphics!
Login to Quote

InvertedWingbacks
4 years
Sisto is on fire! you got through that one unscathed; here's to a successful run!
Login to Quote

One step closer!
Login to Quote

AlexTHFC
4 years
How much can you talk about two matches?

Excellent wins, although that's just what I'd expect from you bae.

mo_123
4 years
Two fantastic wins, Sisto winning you points on his own.

@InfraRed: I hope it is, we need to preform in Europe.
@Maximus: One Small step for Sisto, one big step for Celtic

@AlexTHFC: I can talk a lot, well more than that

@mo_123: Certainly is, a fantastic player!
Login to Quote

TaroMisaki
4 years
As I said! You won that one easily! Even two cleen sheets!
Login to Quote 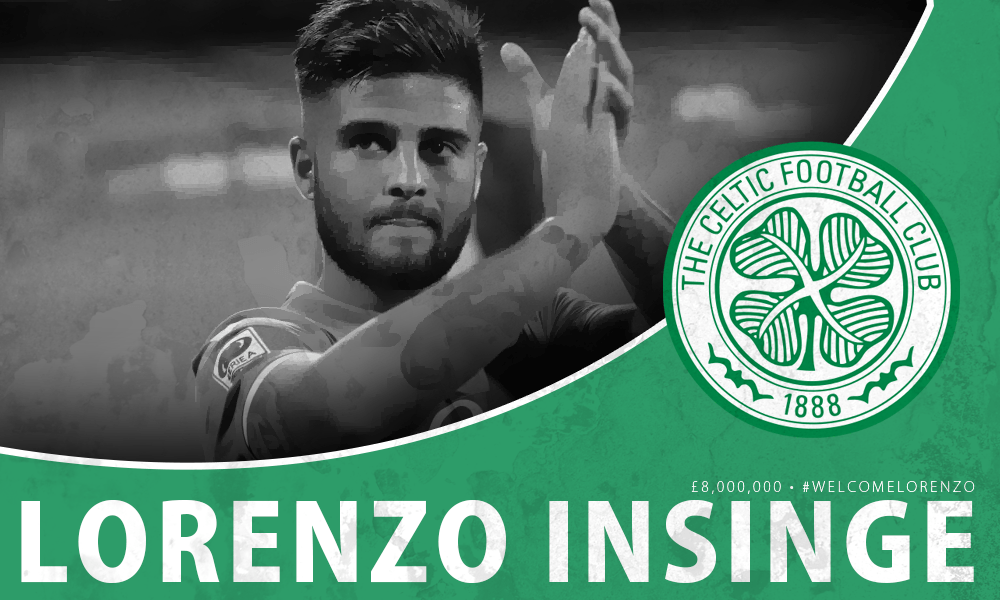 Celtic are delighted to announce the signing of Italian international Lorenzo Insigne from Napoli for a club record fee.

Celtic will pay Italian side SSC Napoli a total of £8,000,000 to acquire the services of Insigne, paying £6,000,000 upfront and then a further £2,000,000 over the next 24 months, beating the previous record signing by a total of £2m, which saw Chris Sutton join the club from Chelsea in 2000. The winger started his career with Napoli, but has had three different loan spells to various lower league sides during his time there.

Upon signing his contract with the club, Insigne told the clubs website that he was delighted to join Celtic, as the club has ‘plenty of history’ and ‘brilliant fans’.

’I am very pleased to join Celtic, it’s a club with lots of history and success to its name. I am very much looking forward to pulling on the famous shirt, especially in the Champions League and winning many trophies with the club. Although it’s sad to leave Napoli, which has offered me not just the opportunity to do what I love, but an education and a family, I am looking forward to starting a new adventure here with Celtic.


Insigne is a fully fledged Italian international, playing six times for the Azzuri, and scored one goal – in a friendly match against Argentina. Celtic boss Ronny Deila also expressed his delight at Insigne joining the Bhoys.

’Lorenzo [Insigne] is a quality player, and that is shown through him starting week-in-week-out at Napoli. He is a player that we are delighted to have at the club, he can win matches for you and be the player that can create something out of nothing and win you games. I am very much looking forward to working with him, hopefully in a long, successful career at the club.


The winger, who has been dubbed the ‘Italian Messi’ by various teammates and opponents, has spent his entire career at Napoli, but made his name on a loan spell at Foggia, where he made 33 league appearances and scored 19 times under Czech coach Zdeněk Zeman.

Insigne then agreed to re-join Zeman, accepting a one-year loan to Serie B club Pescara. Insigne managed 18 goals in the league making him the club's second highest scorer, also providing 14 assists that season, heavily contributing to the team's success. Due to their victory in Serie B, Pescara were promoted to Serie A. At the 2012 AIC Gran Gala del Calcio, Insigne was named the "Best Player" of the previous Serie B season, along with his former Pescara team-mates Immobile, and Marco Verratti.

His performances earned him a recall back to Napoli for the 2012–13 Serie A season. Despite an injury hit last season with the club, where he was absent for 5 months – but made a goalscoring return whilst wearing the captain’s armband against Sampdoria – he made a total of 94 league appearances and scored 10 goals for his hometown side before joining Celtic.
Login to Quote

Maximus
4 years
What a steal!?

I'm amazed you were able to get him for such a tiny fee!

No doubt a future club legend
Login to Quote

Feliks
4 years
Insigne for 8m eh? Not bad... not bad at all considering in one of my Newcastle Jets saves, Celtic were avidly chasing Emile Heskey xD

Moving the club in a positive manner Tal, good work

Zed
4 years
Great, great signing there. Didn't think you'd be able to get him at Celtic, with all due respect

Justice
4 years
Insigne signing for Celtic?!? Not bad at all!