OlleM13
6 years
Wow... Tough group, but you can get through!
Login to Quote

(JEEEESUSSSS that is a tough group!)
Login to Quote

C.J.Lippo
6 years
GULP! That group will definitely be a tough ask but you never know, stranger things have happened!
Login to Quote

Yeah i hope so, difficult but we can do it!

(JEEEESUSSSS that is a tough group!)

Haha i think you summed it up with that reaction man

Thanks man, we'll give it our best shot! Fingers crossed!
Login to Quote

Live For FM
6 years
a tough group...... and that is needed for Marseille. You will need that colombian's skills to get through this.... don't think he is as good as Cabella though

Jack
6 years
Jeeesus that's gonna take some real effort getting out of! Best of luck!
Login to Quote

Andy10Cook
6 years
I'd be aiming for third in that group, but will be very tough as Lazio are a decent side for sure. Though you could prove me wrong and get top 2 in the end, no matter how difficult that task seems.
Login to Quote

nah just kidding mate, its going to be a very tough test for us, but id rather that than get three teams we cruise past, its the Champions League you have to be at the top of your game if you want to do well!

As for Cardona, hes made an impressive start, hopefully he'll fill Cabella's shoes! Thanks mate!


Cheers mate, definitely wont be easy but we've got a good enough squad to at least put up a fight!

Yeah third is the aim at the minute but we'll give it our best shot and see where we end up!
Login to Quote

AUGUST ROUND UP: LIGUE 1 & TRANSFERS UPDATE

Lucas Ocampos
Olympique de Marseille started their third season under Christophe Galtier’s reign with a frustrating 1-1 draw with FC Nantes in a repeat of last seasons Coupe de la Ligue Final. New signing Gerard Gumbau was forced into making his debut as Lassana Diarra was injured, and Vlad Chiriches and Edwin Cardona were left on the bench by Galtier. However things didn’t get off to the best of starts for Marseille as after 22 minutes Valentin Rongier scored a sublime dink over goalkeeper Brice Samba after being played through on goal by former Monaco forward Emmanuel Riviere. However Marseille kept coming and after 62 minutes they were level as a fantastic run by Lucas Ocampos saw the Argentine winger pull the ball back for Michy Batshuayi who scored his first goal of the season to give Marseille the point, meaning L’OM made a steady start to the 2017-2018 season.

- Georges-Kevin Nkoudou Runs The Show As Marseille Romp To Win

Georges-Kevin Nkoudou
L’OM picked up their first three points of the season in an easy away day trip to Guingamp as they romped to a 4-0 victory. After three minutes, Marseille were up and running as Michy Batshuayi slotted home from the penalty spot after an Angoua foul on Georges-Kevin Nkoudou. After demanding first team football at the end of last season, Georges-Kevin Nkoudou showed just what he was capable of in the 28th minute as Lucas Ocampos run to the by-line saw the Argentine winger pull the ball back across to the winger who smashed the ball into the back of the goal at the back post. In the 55th minute Marseille made it three nil as Sankhare handballed on the edge of the Guingamp area and Michy Batshuayi stepped up to slot home from the penalty area to make it three nil. The scoring was complete 18 minutes later though when Jonas Martin played another sublime through ball to Ocampos who squared the ball to Nkoudou who powered the ball into the bottom corner to make it 4-0 and secure the three points for Christophe Galtier’s men.

Jonas Martin
Olympique de Marseille were unable to find the breakthrough in their first Ligue 1 game of the season at the Stade Velodrome as Lille frustrated Christophe Galtier’s men again. By sitting deep Lille limited the amount of chances Marseille were capable of creating and as such the side from Northern France came away from the Stade Velodrome with a big early season point.

Brice Dja Djedje
After the frustrating 0-0 draw against Lille, Marseille returned to their full flowing attacking football at the Stade Velodrome with an easy victory over Montpellier. Their first victory at the Velodrome got off to a dramatic start with the scores level at 1-1 after only 14 minutes when Edwin Cardona smashed in his first goal for his new club after 9 minutes and Romain Thomas headed past from a brilliant delivery from Poko. However after 28 minutes Edwin Cardona turned creator as he played a delightful ball over the Montpellier defence to find Michy Batshuayi who powered a fantastic header past Geoffrey Jourdren in the Montpellier goal to restore the lead for L’OM. The three points were secured in the 58th minute as Brice Dja Djedje provided his second assist of the season as he slipped the ball back to Jonas Martin at the edge of the Montpellier goal, and the former Montpellier midfielder smashed the ball into the top corner to secure the victory and make it 3-1 to L’OM to keep their unbeaten start to Ligue 1 going.

Edwin Cardona
Olympique de Marseille moved temporarily second in the league despite Monaco having a game in hand on Christophe Galtier’s side, with a 2-0 victory against top of the table Stade Rennais. In a tense first half it was Rennes who had the best chance through Alexandre Pato who headed narrowly wide after a superb cross from Romain Danze. However in the second half it was Marseille who got the scoring underway as in the 66th minute Michy Batshuayi, who had been bought on to replace Islam Slimani, received the ball out wide on the right and swung the ball in for Gabonese midfielder Lemani to slot home and give L’OM the lead in a massive early season face off. Just 8 minutes later Marseille’s lead was doubled as Lucas Ocampos spotted another fantastic run by Michy Batshuayi and the Belgian forward managed to cross the ball in deep to Edwin Cardona who smashed a fantastic volley past Benoit Costil in the Rennais goal to seal the three points for Marseille and move them up to second after only 5 games. 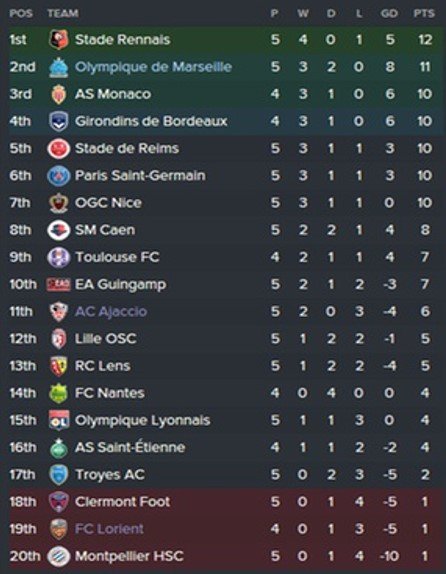 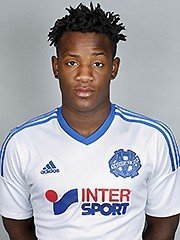 MICHY BATSHUAYI
With 4 goals and 2 assists in 5 appearances, the big Belgian striker has started the season in flying form and if he can continue to bang in the goals with this strike ratio then he could be on for his best season in an L’OM shirt yet. After two good seasons, could this be the year that Batshuayi finally hits the heights that he seems to be capable of, on a more consistent basis?

Clinton N’Jie, Tottenham Hotspur, Loan. We had been looking for a third striker all summer and after several offers to take Munir off of Barcelona’s hands had failed, we were left with a situation where we were approaching the end of the transfer window and beginning to run out of time. Clinton N’Jie is a player who knows Ligue 1 very well and had a fantastic year for Lyon before he moved to Tottenham and if he can find his form and his feet in the opportunities he gets then he will be a useful addition to our squad.

Chaker Alhadhur, SM Caen, £2.3 Million. Another addition in an area where we needed reinforcements. With Benjamin Mendy and Franck Tabanou either injured or suspended going into the end of August we needed someone who could deputise at left back. Camilo Zuniga was unable to join us from Swansea as we had reached the limit of the maximum number of foreign players we could register. Alhadhur was a player we had scouted all summer and the time was right to bring him in and hopefully he can develop into a good enough player to really challenge Tabanou and Mendy for the left back slot in the starting XI.


A very good start to the season if not fantastic. We’ve picked up 11 points from the first possible 15 and we’re very happy with it considering it is our best start to a Ligue 1 season. The victories over Guingamp and Montpellier were very pleasing on the eye as we scored 7 goals in 2 games, played some delightful football and moved the ball around with some real pace and the two sides couldn’t cope with it. Against Lille and Nantes in the two draws we were disappointing as we couldn’t find a way around their systems as they both clearly set up to frustrate us and try and nick something and FC Nantes very nearly did and they seemed to have found a way to get positive results against us, which started with the Coupe de la Ligue Final. To finish the month off on a positive note though we did absolutely brilliantly against Rennes in the final game of the month with some fantastic counter attacking football so to do that well in a game was brilliant and the boys deserve a lot of credit. To be second at the end of August is encouraging, although if last season was anything to go by the teams that are up there at this stage of the season, then things won’t finish that way, and hopefully we can continue with our very good run. The other thing that needs addressing is the UEFA Champions League Group Stage Draw. We know we’ve been dealt a very tough group and one that we are going to have to do miraculous things in to get out of but if we break it down we could do something here. FC Barcelona are obviously a world class team that could and should beat us in both games but Manchester City are different. We gave them a very good game last season in the Europa League and if we can snatch points against them and beat Lazio then maybe, just maybe we have a chance in this group.

OlleM13
6 years
Excited to see how N'Jie will do it! I really love him.. Oh and btw.. Good start to the season

Maybeee dont get your hopes too high for this one man but....SPOILERS!!

Yeah a solid start, nice to be above PSG this early on in the season too

Griffo
6 years
Good start, any chance at seeing how Batshuayi has developed and his overall goal scoring record?
Login to Quote