How would you write that into the story???

Live For FM
6 years
that's the thing you want to hear as a fan and chairman of a football club, when your manager shows great commitment to your beloved team. Great targets, hopefully get at least 3 of them.. any guess on the transfer budget this season..

and one request..... how's Liverpool doing on your save??? can you give me their summary and some screenshots... if you don't mind?
Login to Quote

2016-03-23 14:26#227791 SooruSooru : that's the thing you want to hear as a fan and chairman of a football club, when your manager shows great commitment to your beloved team. Great targets, hopefully get at least 3 of them.. any guess on the transfer budget this season..

and one request..... how's Liverpool doing on your save??? can you give me their summary and some screenshots... if you don't mind?

yeah committed but still not offered a new contract

transfer budget wasn't as much as I'd have hoped for but stuff that happens soon will reveal all!

as for Liverpool, as a Liverpool fan I try not to look because normally the game makes them ridiculously bad! I'm away from home atm mate without my laptop so I'll have a look when I'm back! Quite a bit ahead of the story too at the mo so it will be a bit of a look into the future!

Gerard Gumbau, FC Barcelona, £1.1 Million. With Alaixys Romao’s departure to Burnley looking more than likely, we needed another defensive midfielder and preferably a younger player too. Gumbau was availably cheaply as well as having the ability to become a solid player for us, and hopefully he can develop into one hell of a player. The holding midfielder was signed with the hope that he can prove to be a steal for the club, although the deal did include a buy back clause should he develop into a Barcelona quality player.

Mousa Dembele, Tottenham Hotspur, Free Transfer. Abou Diaby’s frustration at his lack of football last season drove us to making this signing as Diaby was looking likely to leave in the summer. Dembele was available on a free and was willing to take a significant wage drop in order to join Marseille, and hopefully he can prove to be another steal for the club, and can be a quality player for us in the upcoming season.

Borja, AS Monaco, Free Transfer. Like Dembele, Borja was signed on a free transfer at the end of last season as it was clear we were going to need some more cover at central defence after Adil Rami had a relatively poor season. Is a very good young player and has the potential to develop into a leading defender for the club, and hopefully won’t follow the same path as Karim Rekik who was also hotly tipped but failed to achieve that potential and has now been moved on.

Karim Rekik, Girondins de Bordeaux, £1.7 Million. Never really seemed to develop into the player he was predicted to when he first arrived at the club and as such needed to be moved on to a club more suitable to his level. His departure allowed us to bring in a replacement that can hopefully fill and improve on that position in the squad.

Jeremie Porsan-Clemente, OGC Nice, Free Transfer. Having demanded more first team football during last season, he refused to sign a new contract and as such left the club on a free transfer. Has since signed for Nice although has yet to make much of an impact at Marseille’s Sud Derby rivals.

Emmanuel Adebayor, Lekhwiya, Free Transfer. When he first signed for the club the intention was that he would only stay until the end of last season, and as such he wasn’t offered a new contract. Lekhwiya came in and offered him more money and the player departed for Qatar and also freed up space in our squad for the signings made later on in the summer transfer window.

Alaixys Romao, Burnley, £230K. Was sold to allow us to bring in a more youthful player in that position, as with Romao and Lassana Diarra in the squad, two of our three defensive midfielders were over 30 and reaching the end of their careers. Didn’t appear much for us last season and as such was sold to allow for development in the squad, but was a solid player for us in the two seasons he was at the club with us and will hopefully have a successful end to his career at Burnley. 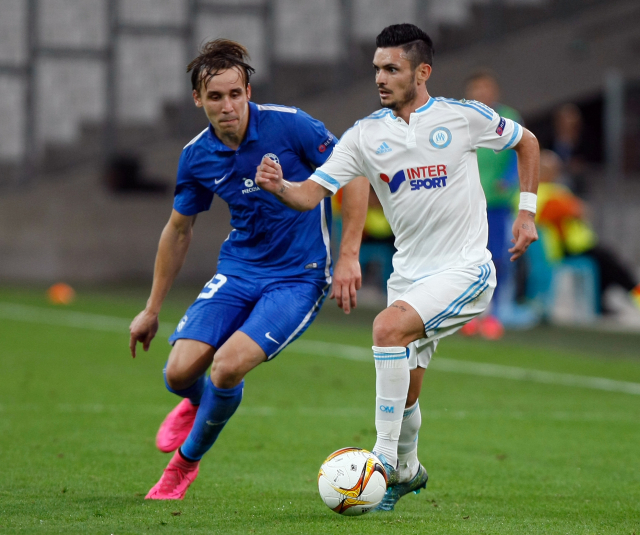 Olympique de Marseille have today confirmed that their player of the season, Remy Cabella has left the club, joining Spanish giants Atletico de Madrid in a deal believed to be worth £27.5 million to last season’s Ligue 1 Runners Up. Rumours began to spread after the end of the Ligue 1 season that big clubs were circling around the head of the winger, who scored 23 goals and assisted 24 last season, and there seems to have been some truth to the papers stories as the Frenchman joined Atletico today.

In a statement released by the club Cabella thanked the fans and the club for giving him the chance to restart his career after a poor season at Newcastle. ”I am eternally grateful for both Christophe Galtier and Marseille for bringing me back to France two seasons ago and allowing me to become the player I knew I could be and the player that is now at one of the biggest clubs in Europe. I had an amazing time at Marseille and wish them all the success for the future, and hopefully we don’t get drawn together in this years Champions League. Merci!”

Griffo
6 years
BIG MONEY TRANSFER, Why did you chose to sell?
Login to Quote

mgriffin2012
6 years
He wanted to leave man cos bigger clubs than Atletico came knocking but only Atletico would offer the money I wanted for him. Plus it offers a much bigger transfer budget now! Unfortunately for us we're still a club that will have to sell our best players because we dont have the financial power of PSG
Login to Quote 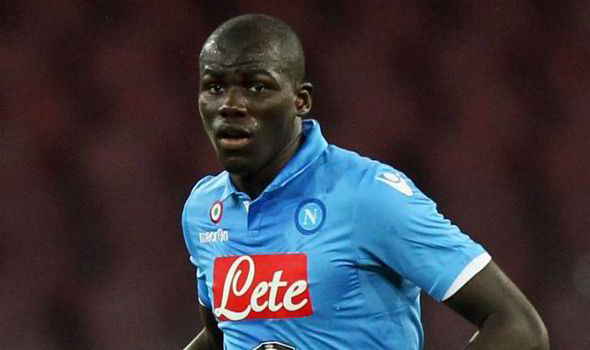 Local media outlets in Marseille are today claiming that talks between Olympique de Marseille and SSC Napoli central defender Kalidou Koulibaly have today broken down. The collapse in negotiations is believed to have come about after the defender and his agent tried to broker a deal that would make the Senegalese defender the club’s highest earning player.

Christophe Galtier is believed to have been keen on the player for a long time, and has had scouts at the San Paolo since January. However he is understood to not be too frustrated at the defenders inability to compromise on a deal and insists that there are other players out there that can do just as good a job, if not better, in the central defensive position that is missing from the club’s squad.

One man that is thought to be at the forefront of the club’s mind is Koulibaly’s fellow Napoli defender, Vlad Chiriches. The former Tottenham defender is believed to be frustrated at his lack of game time at the San Paolo and as a result would relish the chance of first team football at the Stade Velodrome.

16.07.2017: Olympique de Marseille are delighted to announce that Algerian forward Islam Slimani has completed his transfer to the Stade Velodrome from Sporting Lisbon for a fee of £5.5 million. Negotiations between manager Christophe Galtier and the Algerian forward who is two goals away from becoming his countries all-time leading goalscorer finally came to a close last night with the forward arriving on a contract that keeps him at the club until 2021.

Christophe Galtier spoke about his newest acquisition after the forward signed on the dotted line saying: ”We are all delighted to have signed someone with such an eye for goal. Islam is a fantastic forward and with any luck he can be a real force here and help us achieve our goals this season by scoring a lot of goals. His record speaks for itself and for us to have secured his signing is a great achievement.”

The player also gave his take on the transfer by stating: ”It’s no secret that other clubs were in for me as well, and I had plenty of options, but moving here always seemed like the right move because of what this club is about. It has a fantastic set of supporters and isn’t too dissimilar to Lisbon and hopefully I’ll fit right in and we can enjoy a lot of success together.”

Live For FM
6 years
selling Cabella is likely to damage you....(or not)???
Login to Quote

mgriffin2012
6 years
Haha maybe, you'll have to wait and see

will have the liverpool screenshots for you soon mate!
Login to Quote

mgriffin2012
6 years
@SooruSooru The Liverpool screenshots should be attached to this post mate! Got the latest Premier League table, their playing squad and club overview from the end of the season im at!

FC Lorient sealed their second trophy of 2017 by coming from behind again to beat French Champions Paris Saint-Germain in the 2017 edition of the Trophee Des Champions played in Geneva. A fantastic hat trick by former Monaco forward Lacina Traore powered Lorient to the title.

However things didn’t get off to the best of starts for Lorient as Alvaro Morata, signed from Arsenal during this summer’s transfer window, opened the scoring with a well placed effort in the 9th minute. However the scores were level just a minute later as Traore used his extraordinary height to his advantage to head home and give Lorient a glimmer of hope.

In a bizarre and thrilling 9 minutes though the result was sealed. In the 28th minute Alvaro Morata went on a fantastic run through the Lorient half after being played in by Di Maria and smashed the ball past Lecomte to make it 2-1 PSG. However a poor back pass by Verratti in the 34th minute allowed Traore to pounce and round the PSG keeper to slot it home to make it 2-2. Then just two minutes later Traore again managed to head home with a bullet header to seal it and make it Lorient 3 PSG 2 and bring the trophy back to Lorient with them, giving them a massive boost ahead of the upcoming Ligue 1 season.

Griffo
6 years
Morata ended up at PSG in your save.. interesting!
Login to Quote