13.09.2017: Olympique de Marseille, making their return to the UEFA Champions League have claimed one of the biggest scalps in the competitions history after stunning Barcelona to win 6-0 at the Stade Velodrome on Matchday 1 of the Group Stage. Barcelona were never at the races and as such, Christophe Galtier’s men punished them by smashing 6 goals past Laurent Blanc’s side. The rout started after only 15 minutes when Lassana Diarra slipped the ball to Mousa Dembele. The Belgian midfielder then saw Michy Batshuayi in space in the periphery of his vision, before the Belgian forward, Batshuayi coolly back heeled the ball into the path of Lucas Ocampos who curled the ball past Marc-Andre ter Stegen to give Marseille a 1-0 lead.

L’OM’s second came just 5 minutes later when Marseille broke with some real pace and Benjamin Mendy delivered an inch perfect cross to the back post where Romain Alessandrini was waiting to push the ball over the line to give Marseille a surprising 2-0 lead. The shock factor was increased on the stroke of half time as Mario Lemina exchanged passes with Mousa Dembele. The Belgian, who had been at the heart of everything Marseille had done well so far, then unleashed a powerful shot which was spilled by ter Stegen, with Lucas Ocampos running in to seize on the rebound and slot home to make it 3-0 and all but secure the three points for Marseille.

In the second half Marseille really took Barcelona to the slaughterhouse, as after 64 minutes Benjamin Mendy slipped Georges-Kevin Nkoudou free down the left wing. The young winger delivered the ball on a plate to Lucas Ocampos who completed his hat trick with an easy finish to make it 4-0 Marseille. The team from the south of France weren’t done there though and it was five just a minute later as Mendy again delivered another perfect cross which was finished off by Algerian striker Islam Slimani who smashed the ball home to almost complete a famous rout for his new side. The scoring was complete after 71 minutes when a Lucas Ocampos free kick was delivered brilliantly to Mario Lemina whose powerful header was spilled by ter Stegen into the Barcelona goal, to complete a humiliating night for ter Stegen and for Barcelona all round.

Whilst Marseille were stunning the footballing world, in the other game in Group E, it was a rather duller affair as Manchester City managed to secure a 2-1 victory over SS Lazio, to put Man City second in the group, behind Marseille who are top.

After matchday 1 then, it is unsurprisingly Olympique de Marseille who top Group E through their superior goal difference with Manchester City sitting in second after their 2-1 victory over Lazio. The Italians sit in third and, although meaningless at the minute, in the Europa League qualification place with Barcelona bottom of the group.

Matchday 2 in Group E sees table topping Marseille visit the Stadio Olimpico to meet Lazio, with the Italians hoping to pick up their first points of the season in Rome. In the other game, the two heavyweights in the group clash at the Camp Nou as Barcelona host Manchester City in a thrilling tie.

Haha i dont really know what to say about it! I'm just as shocked as Barcelona were!
Login to Quote

What a result!
Login to Quote

Haha i really dont know what to say! We were brilliant theres nothing more to it, but i dont feel like its beyond us to go and lose on matchday 2 and 3 etc.

Justice
6 years
You crushed them! Odds on their president claiming your players are on drugs?

Haha yeah definitely crushed them! Yeah its plausible haha, maybe they'll try and overpay and break the rules trying to sign some of our youngsters too 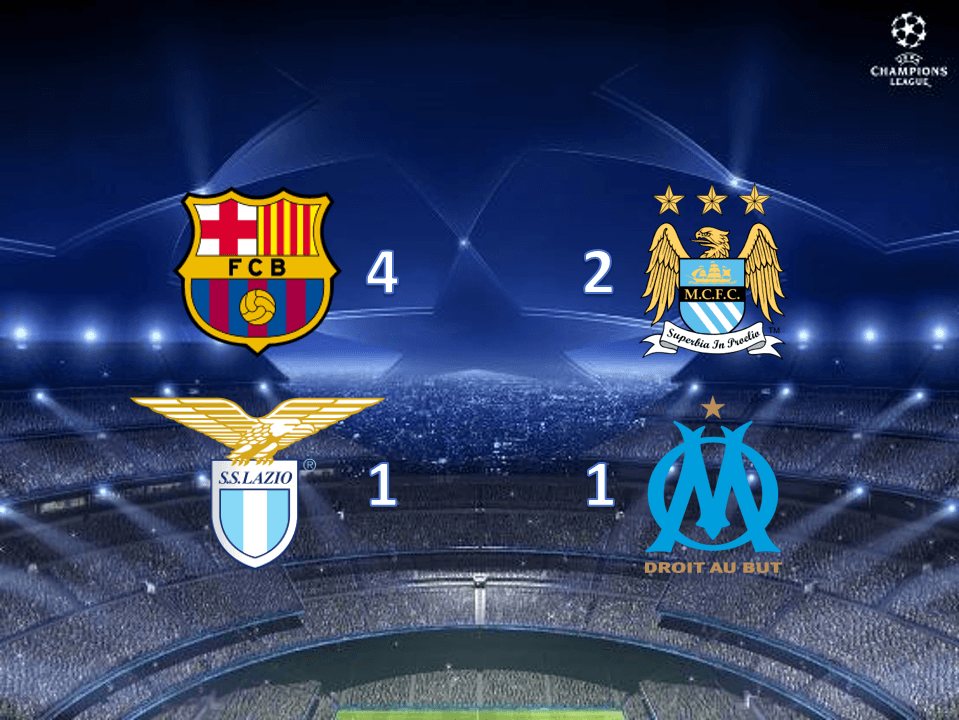 Another fantastic night of football in the UEFA Champions League. In Group E, tournament favourites Barcelona recovered from their shocking mauling at the hands of Olympique de Marseille on Matchday 1 by beating Manchester City 4-2 in a thrilling tie at the Nou Camp. The Catalan giants were out of sight before Manchester City looked like coming into the game, as Neymar scored in the 26th minute to give Barcelona the lead before the Brazilian was fouled in the 36th minute in the area. The resulting penalty was coolly slotted home by Lionel Messi to give Barcelona a comfortable 2-0 lead with Manchester City not looking threatening so far. However ten minutes into the second half Raheem Sterling scored a fantastic solo effort after receiving the ball from Kevin de Bruyne, however the Belgian’s hard work was undone in the 60th minute as Lionel Messi’s mazy run saw the Argentine slip the ball back to Luis Suarez who buried the ball in the top corner to make it 3-1. Suarez doubled his count for the night and added Barca’s 4th in the 73rd minute, all but securing the three points for the Spaniards, but Kevin de Bruyne was on hand to slightly spoil Barcelona’s night as he scored a second goal, and the final goal of the game for City with 9 minutes left.

Meanwhile at the Stadio Olimpico, Lazio and Marseille played out an entertaining 1-1 draw to share the points, meaning the French side stay top of Group E after 2 games. Khouma Babacar scored the opening goal for the Romans after being slipped through on goal by Marco Parolo. However Marseille responded in the 74th minute as Michy Batshuayi played a fantastic chipped through ball into the penalty area and Argentine winger Lucas Ocampos, who scored a hat trick last time out against Barcelona, was on hand to slot home past the Lazio keeper to ensure that the points were shared in Rome. The only other key event during the game was a sending off for Marko Arnautovic in the 90th minute for a horror tackle.

The two results mean that Olympique de Marseille stay on top of the table after 2 games apiece, with 4 points from a possible six, with Barcelona lying in second with 3 points because of their head to head record against Manchester City being in the Spaniards favour. The English side occupy third spot and at the moment will drop into the Europa League, whilst Lazio only have 1 point from a possible 6.

Matchday 3 in Group E then will see table topping Olympique de Marseille visiting the Etihad to play Manchester City in a repeat of last season’s UEFA Europa League clash. The Stadio Olimpico and Lazio will host Barcelona, with the games being played on the 17th October.

MJK46
6 years
Not a bad result but be careful.

Yeah not a bad result mate, but its a shame that we havent followed up our performance at home against Barca with another three points! Man City up next as well so it could be a wasted opportunity.

And nice one man, thanks for using it on my story

Nah shouldn't complain, would have killed to have 4 points from the first 2 games when the group was drawn!
Login to Quote

YazanBlueLions
6 years
6-0 Win against Barca!!!! Draws against Lazio. You just got FM'ed
Login to Quote

Haha yeah I know mate, but I'll take it if it involves a 6-0 mauling of Barcelona!! Tbf the Lazio game was away from home and we've still not cracked playing away from home!