MJK46
5 years
I feel you will win!! Also I am happy this story is back!
Login to Quote

Thanks man, glad to see the love for this story is still there!

On a high after the 5-2 thumping of Lazio, Parma went into their game at home against AC Milan confident of claiming a famous result however after Giammario Piscitella’s sending off in the 47th minute it was never in doubt that Milan would pick up the points. Their first goal came in the 60th minute as Giacomo Bonaventura smashed home the rebound after Raffaele Di Gennaro spilled the ball. The icing on the cake came on the stroke of full time as Carlos Bacca broke for Milan before slipping the ball through to Divock Origi who nestled the ball in the bottom corner as Milan took a big step towards the Champions League with an important victory.

After the 2-0 defeat to AC Milan at the Ennio Tardini, Parma travelled to Genoa hoping to pick up their second successive away win to move themselves further clear of the relegation zone. The travelling side gave themselves the lead within 12 minutes as Marcello Trotta, who had received the ball from the lively Denis Baumgartner, found Francesco Corapi in the penalty area with the 33 year old winger advancing into the area before dinking the ball into the back of the net. Then on the stroke of half time, the lead was doubled as Pedro Pereira’s cross found Marcello Trotta who laid the ball off to Niccolo Belloni who smashed the ball home for his seventh goal of the season. It was a big win that moved Paolo Vanoli’s team ten points clear of the relegation zone and all but secured their place in the top flight for next season and moved them closer to European football than relegation as Serie A started to move towards its conclusion.

After such a positive display against Genoa, Parma went into their game against Torino full of confidence and hoping to snatch a second successive win. Nigerian forward Imoh Ezekiel fired Parma in front in the 12th minute as he received the ball from Francesco Corapi with his back to goal before turning his man and firing a low effort into the far corner to make it 1-0. However despite Parma’s domination of the tie, Torino were level five minutes before the break after Norbert Gyomber contentiously gave away a penalty which was converted by the Romanian Chipciu. In a poor second half the visitors dropped deep to deny their opponents any real goal scoring opportunities and the full time whistle came too soon for Parma who were unable to grab the winner as both sides took home a point.

In a hotly contested match up between two rivals having very good season’s both sides had their own fightbacks. In a rapid counter attack, Parma found their breakthrough as Rodrigo Alborno switched the play over to the right flank with Niccolo Belloni crossing into the area to find Trotta who glanched his header into the far corner for his second goal of the season. However Bologna were level against their rivals before half time as Mattia Destro broke free from his man to connect with Saphir Taider’s free kick to smash Bologna back onto level terms right on the stroke of half time. The hosts had taken the lead in just before the hour mark as Mattia Destro appeared to foul Raffaele Di Gennaro from Kolovos’ corner, which allowed Ibrahima Mbaye to roll the ball home. Paolo Vanoli’s side were not giving up though and in the 73rd minute Simone Sini’s diagonal ball was met by Niccolo Belloni who connected with the ball sweetly to fire Parma back on level terms. It was Bologna who had the best chance of the last ten minutes to win the tie as Raul Bobadilla smashed the ball into the post with just seconds left, however Parma were able to draw a collective sigh of relief as they claimed another point in their quest to survive. 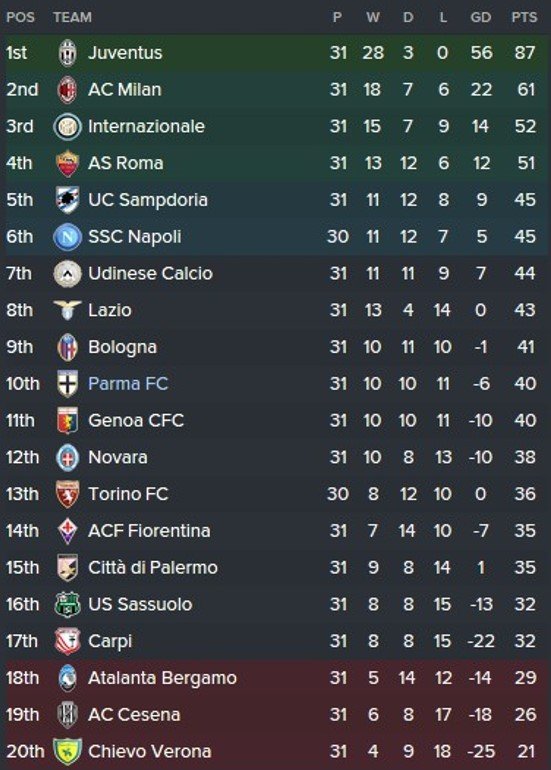 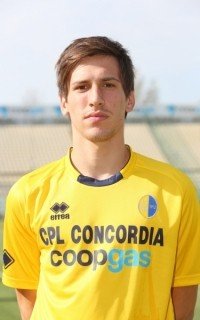 Perhaps Parma’s best player this season and the catalyst for their drive to safety, Niccolo Belloni has played his best football of the season during March, scoring twice and providing one assist as Parma moved 11 points clear of the relegation zone and Belloni’s name may deservedly be upon the lips of higher reputation clubs.

Norbert Gyomber. The Slovakian central defender form has been somewhat a little shaky this season suffered strained knee ligaments whilst on international duty with Slovakia that will leave him out of action for two months and will mean Gyomber will more than likely miss the rest of the season. 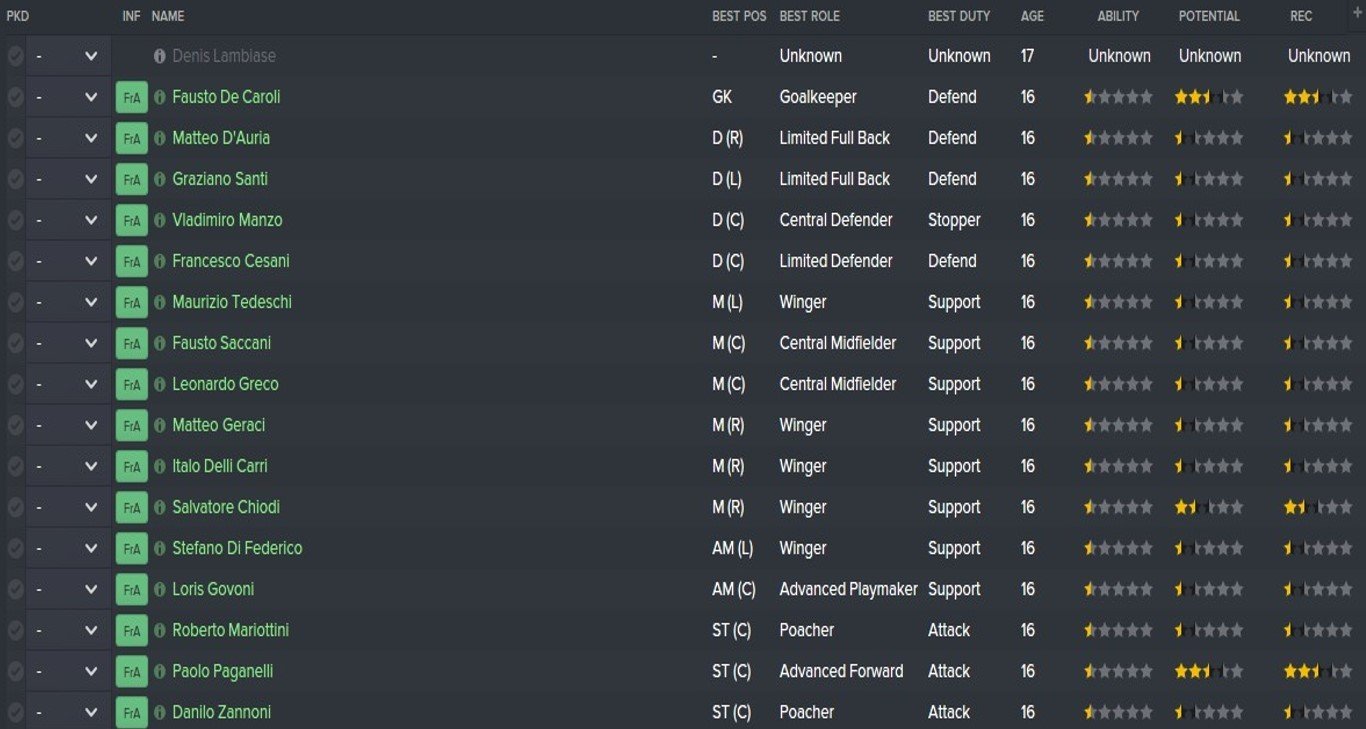 The club’s annual youth intake took place in March. Of the crop of youngsters to be promoted to Parma’s youth sides Fausto de Caroli and Paolo Paganelli look the most likely to have a part in Parma’s future.

With just seven games left and sitting 11 points clear after hitting that mythical 40 points mark, Parma can perhaps play their four games in April with less pressure on their shoulders. Up first is a visit from Napoli who are still in the chase for the final UEFA Champions League place. Next up are two away days against teams involved in mid table in Novara and the relegation mix up in Sassuolo, so dependent on other results, two defeats could see Parma slip towards the wrong end of the table. Paolo Vanoli’s side finish the month back at the Ennio Tardini with a game against Palermo whose own relegation fears have eased a little of late.

03.03.2019: After a 1-0 defeat to Juventus left Atalanta Bergamo in 18th place with just ten games left, the Bergamo based club took a big gamble by sacking manager Walter Mazzarri as they hope that his replacement can steer the club away from the bottom three.
26.03.2019: With only seven games remaining in the Serie A season, Atalanta perhaps indicated that their priorities were to rebuild in Serie B next year by appointing from within as long term coach Sergio Porrini was appointed as the clubs new first team manager.


Five points from a possible twelve is still a good return for us. We’ve done very well to get to that 40 point mark and against Torino and Bologna it was a case of us not taking our chances and had we stuck an extra goal in the back of the net we would have been even further clear of the relegation zone and potentially challenging for European football. We didn’t disgrace ourselves against Milan and that’s something to be proud of, whilst against Genoa we did very well and I am very proud of my team. We’ve got seven games left, four of which will be played next month and hopefully by the time we get to the end of April, we’ll be safe and there’ll be no chance whatsoever of us going down and we can start looking forward to the summer and a second season in Serie A.