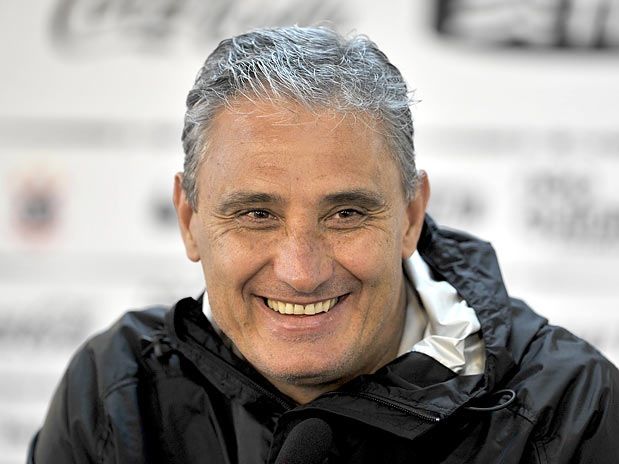 Historic German outfit 1. FC Kaiserslatuern are eyeing a Bundesliga return this season with the appointment of Corinthians manager Adenor Leonardo Bacchi as their new Head Coach.

Bacchi will fly to Germany tomorrow to take up his new role, in which he may struggle as he does not speak the language. Bacchi, also known as Tite, has also never managed outside of South America before, and the prospect of managing Kaiserslautern has seemed to be a big challenge for the Brazilian.

"The club were interested and after meeting a few times, so was Adenor Leonardo. It marks a new era in his career and a new era in the clubs history."

1. FC Kaiserslautern were invited to pay their respects for KSK Heist defender Roel Grant before the start of the Bundesliga 2. season, but the side were anything but respectful on the pitch, demolishing the Belgian side 4-0.

On a mild summers evening at the Gemeentelijk Sportcentrum, fans from both sides turned out to honour the Belgian defender, thirty-two.

Chris Lowe, who is leaving the club in January, gave Kaiserslautern the lead after twenty-five minutes with a tactfully placed free-kick from the edge of the box. The Complete-Wing-Back assisted another goal later in the game.

Four minutes later, an error from KSK Heist defender David Wijns allowed advanced playmaker Alexander Ring the chance to finish from inside the box, which he took gratefully.

Another defensive error in the second half, sixty minutes in, gifted Alexander Ring his second of the game, scoring another close range effort. Things went from bad to worse for the Belgian club as Bart Webers was sent off just seven minutes later for persistent fouling throughout the game.

Substitute inside forward Daniel Halfar completed the rout with a deftly executed finish in the 83rd minute.
Login to Quote

mgriffin2012
6 years
Good luck mate, looking forward to this, interesting to see a German save with a different team! Great start with the 4-0 win also!
1
Login to Quote

Griffo
6 years
Good start to this story, best of luck!
1
Login to Quote

Kaiserslautern today can announce that they have completed the signing of two promising youngsters.

The first, 17-year-old Jhon Arango has joined from Colombian side Deportivo Estudiantil for a fee of around €30,000. The midfielder, who can play both as an attacking midfielder and a central midfielder has made 16 appearances for the Colombian U20's, scoring four goals.

FCK Head Physio Frank Sanger had this to say on the transfer:

"Jhon failed his medical due to a sprained ankle, so as a club we have decided to allow the transfer to go through on the 1st of July 2016, allowing him to return to full fitness and gain another year of experience playing in his own country."

The midfielder has signed a €2,000 a week three year contract, keeping him at the club until 2019.

The second signing is Paris Saint-Germain prospect Presnel Kimpembé who hails from the Congolese Democratic Republic.

"The fans are pleased to acquired a player of Presnel's calibre and hope his experience with a bigger club serves the team well."

The centre-back has been sent on an Intensive Language course to learn the German language.
Login to Quote

In their first game of the season 1. FC Kaiserslautern were held to a 1-1 draw against 1860 Munich at the Fritz-Walter-Stadion.

1860 attacking midfielder Levent Aycicek suffered as he scored an own goal in the 24th minute, but redeemed himself in the 85th minute with a deftly executed finis. This was better late than never for the Munich fans as they had been giving the team grief for the majority of the game.

Kaiserslautern were much more efficient in their second game of the season and this saw them come out as victors in a 3-1 win at Hardtwaldstation.

Markus Karl handled the ball in the box in the 52nd minute, leading to a penalty which Sandhausen player Andrew Wooten converted to give the home side the lead. Just two minutes later, Kaiserslautern false nine equalised with a tidy finish from around 15 yards.

In the 70th minute ball-playing defender Patrick Ziegler gave Kaiserslautern the lead with a pin point header from point-blank range, before left-back Chris Lowe was sent off in the 74th minute for persistent fouling.

An error from from Sandhausen's Ranislav Jovanovic allowed inside forward Jan-Lucas Dorow to score a well timed finish from close range to give Kaiserslautern the best possible result. 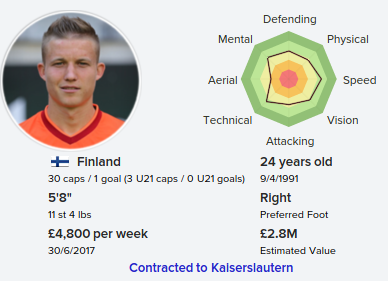 C.J.Lippo
6 years
Liking the look of this, some nice pick ups there as well. Good luck mate
1
Login to Quote

mgriffin2012
6 years
Some good signings there mate and a good start to the season, keep it up!
1
Login to Quote

Soze
6 years
Thanks Lippo and Griffin

Fans were singing the praises of 1. FC Kaiserslautern in the beginning of August at the Edmund-Plambeck-Stadion as FCK came out 5-0 winners against HSV Barmbek-Uhlenhorst, sending them through to the second round of the cup.

Just four minutes later, and with one minute to go in the second half, Jan-Lucas Dorow completed his hat-trick with a great shot. The rout was completed by inside forward Manfred Osei-Kwadwo who scored a real poachers effort from 11 yards.

Kaiserslautern continued their good form on a warm summer evening at the Fritz-Walter-Stadion.

Nurnberg had no answer to Die Roten Teufel's prowess from dead-ball situations as the home side scored all their goals from set-pieces. An error in defence allowed false nine Jan-Lucas Dorow to score a well timed finish from close range in the 13th minute.

Dorow scored again in the 77th with a close range header.

This made was a meaningful one for Patrick Ziegler as he was able to celebrate victory over his former club.

After a defensive error by Paderborn, inside forward Daniel Halfar managed to score a tidy effort from 11 meters, giving Kaiserslautern the lead. Advanced playmaker Ruben Jenssen doubled Kaiserslautern's lead with an effort from range in the 63rd minute.

Paderborn fans were given a glimmer of home when one of their players scored a close range header, but Manfred Osei-Kwadwo scored a well timed close range finish in the 83rd minute to secure the win for Kaiserslautern.

Kaiserslautern had their midfield to thank as they won 2-1 at home against Freiburg.

Freiburg defender Immanuel Hohn showed fans things to come as he nearly gifted Kaiserslautern a goal in the eighth minute. Inside forward Marcus Piossek scored an accurate finish from inside the penalty area on his debut to give Kaiserslautern the lead in the 13th minute.

Freiburg advanced forward Nils Petersen equalised in the 57th minute, but it was Kaiserslautern captain Markus Karl who stole the show with an extravagant finish from distance. 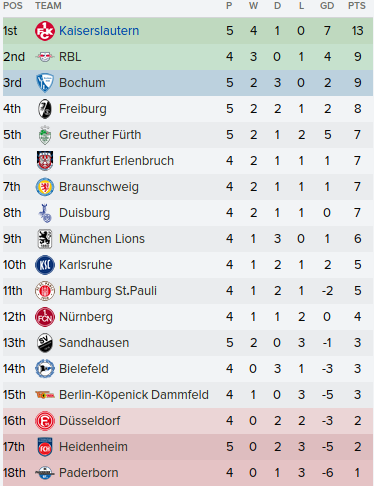 Kaiserslautern remain unbeaten in the league and also have the highest goal difference. They face Hertha in the second round of the cup.

Griffo
6 years
Great start to the season, you couldn't ask for much more really..
Login to Quote