MJK46
4 years
redvee35 Thanks for reading

Jack Appreciate the comment on that. I feel it is best to have a well rounded story with several dynamics.
Login to Quote 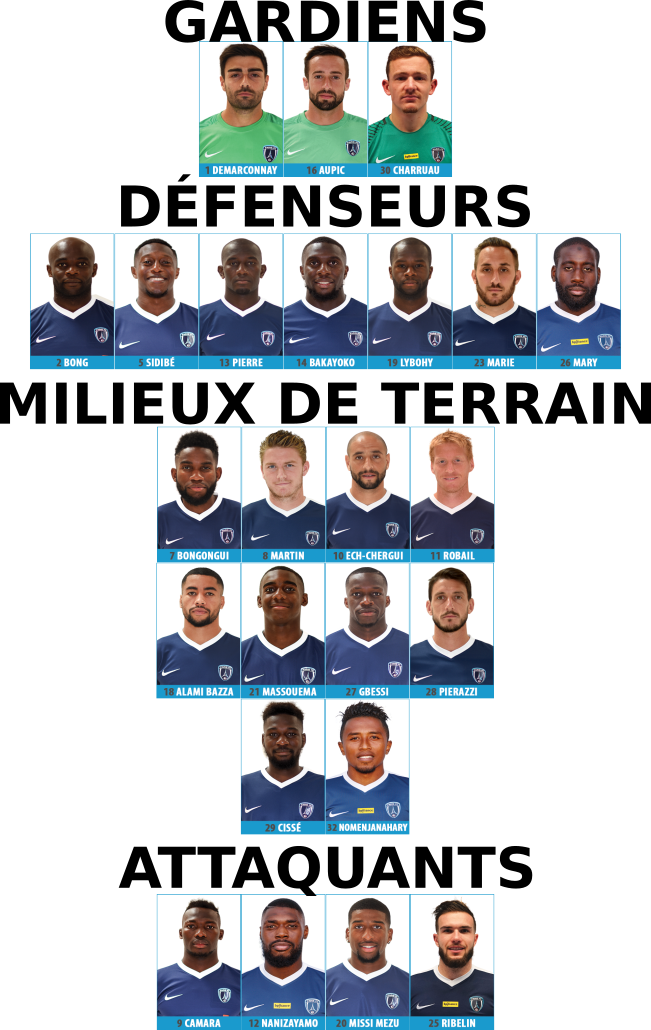 Well it has been two days and after our scrimmage I felt it was time to put together a squad report. The Scrimmage went well with both teams working hard and I was able to assess who would be possible starters and what not. Obviously the set of upcoming friendlies will give me a better idea but this was a great start.

GOALKEEPERS:
We are set with two pretty good goalies; the first being Vincent Demarconnay who has been with us since the 08/09 season. With his age he will be getting limited action mostly in cups or days the first team keeper needs a rest. Next is Paul Charruau who will be the main keeper. He is on loan from Bastia. If he does a good job I will try to keep him here long term. DEFENDERS:
Now this is where we might have a little problem. One thing during this transfer window I will be needing to upgrade on depth hopefully by loans or free transfers. The biggest issue is of their age and we need younger layers especially with how my system runs. The best player has to be a toss up between Frédéric Bong and Jean-Jacques Pierre MIDFIELDERS:
In my opinion this is one of the better areas on the club. We have tons of depth that these guys are able to rotate and be able to play in any of the three formations that will be used. I do feel we might need one more guy to really make the midfielder stronger. I believe Lalaïna Nomenjanahary is one of the best midfielders on the team. He is a utility player who can pretty much play anywhere on the wings and that will be a massive key to us this season. ATTACK:
I really like what we have up front. There are several players I feel will be a massive boost to the offensive game this season. One of the key players on this side is Anthony Ribelin who is on loan from Rennes. He is listed as an AMR but can play in the center. I am expecting big things from him this year. i hope I am not going to be disappointed. 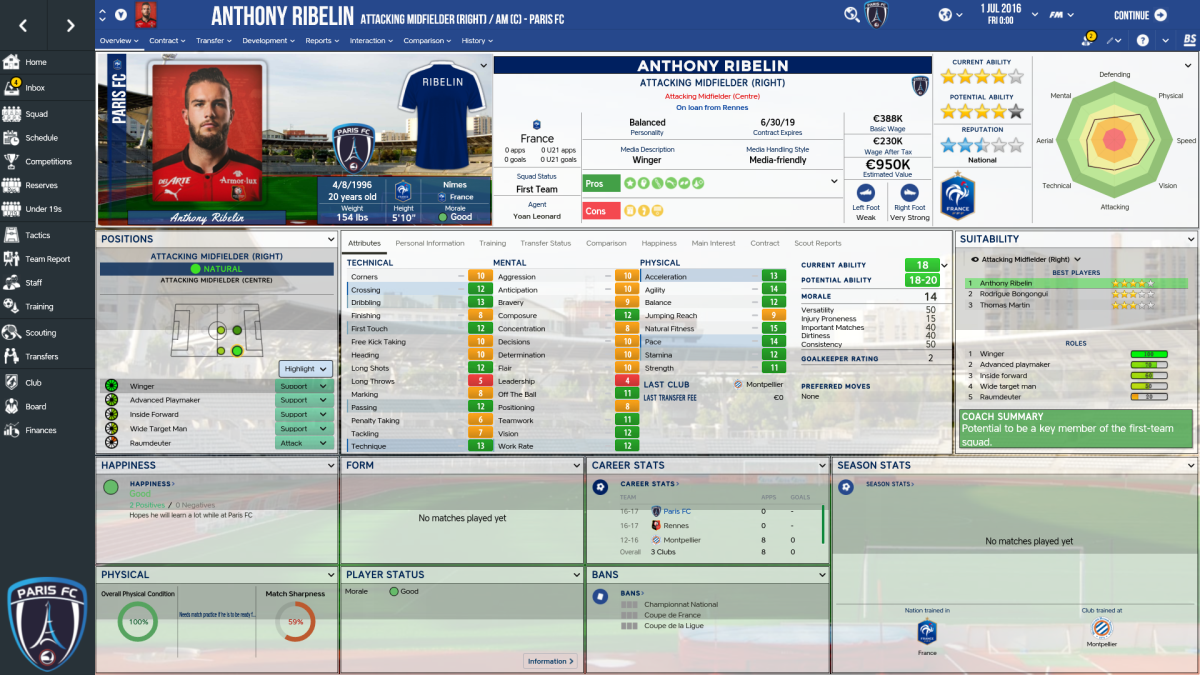 YOUTH:
Paris FC is known for its academy and this current group or reserves and youth players will be a massive piece to the future. There are so many great players but to me and my staff Yannick Gbessi might have the biggest impact right away. He is one of the few Defensive Midfielders on the team so that will be a positive for him. With only being 20 I feel he could become a legend for this club someday. Jack
4 years
That's a decent size squad you've got there. Perfect number to add to if you need to, looking forward to this new season

MJK46
4 years
ScottT Thanks. I am glad it helps with learning about my squad

Jack Totally man. I do need some people especially on defense

WeAreFev Totally, when I was looking at the squad I noticed more than half joined the club for this season after the club got relegated last year from Ligue 2
Login to Quote

Just hours before the big friendly match against Greek powerhouse Panathinaikos, Paris FC have announced that Eddy Lecygne has joined on loan from Stoke City of the English Premier League. This is the first move made by Kévin Gauthier since taking over a few weeks ago.

The 19-year-old found game time hard to come by at the bet365 Stadium and goes on his second loan in two years, this time back home here in France. Lecygne has never made an appearance for his parent club and Manager Mark Hughes was quoted in saying that this is his last chance to prove himself for a future role on the Stoke first team.

“I am delighted to join Paris FC, who are looking to recover after being relegated,” said Lecygne after signing his contract a few hours before kickoff. “Like Paris FC, I have big ambitions for the coming season and it will be a great pleasure to work under the direction of Kévin Gauthier, who has developed an excellent reputation in France, and across Oceania, for his quality as a coach. I can’t wait to begin this loan.”

Gauthier, the former AS Mont-Dore manager, has announced that he will be looking towards frees and loans during the rest of the window. He has been with Paris FC since June replacing Jean-Luc Vasseur earlier in the summer.

PFC remain overwhelming favourites to win return to Ligue 2 this season but the aim for the club’s owner, Pierre Ferracci, is staying in the professional leagues for more than one season .

In other club news Anthony Ribelin will miss the Panathinaikos and is rumored to be out for the next three weeks due to suffering a groin strain during a training session.

Paris FC kick off their match against Panathinaikos at the Stade Charléty. Tickets are still available and are as low as €3. Kickoff will is set for a 8:00pm kickoff
Login to Quote

Not So Fats
4 years
Hey man! Nice once again. Btw, what skin are you using in this one?
Login to Quote PARIS- The draw for the first round of the Coupe de la Ligue has been finalized with the draw being made at the LFP headquarters in Paris. The draw created some great matches including Strasbourg hosting Le Havre and rival Red Star hosting Lens.

For Manager Kévin Gauthier and company they will have to travel to Troyes to face off against ESTAC. The match is set for a 9 August date and kickoff is set for 8:00pm.

Despite being relegated from the LFP we are still able to participate in the cup for this season as we are able to keep the professional status for one year after relegation.

"I am very pleased with the draw and I have a feeling that we might be able to pull something off. I believe this club is ready for competition as preseason has been better than expected," said Gauthier after the draw was announced.

Tickets will be available starting at the low price of €12 and will be on sale starting August First. 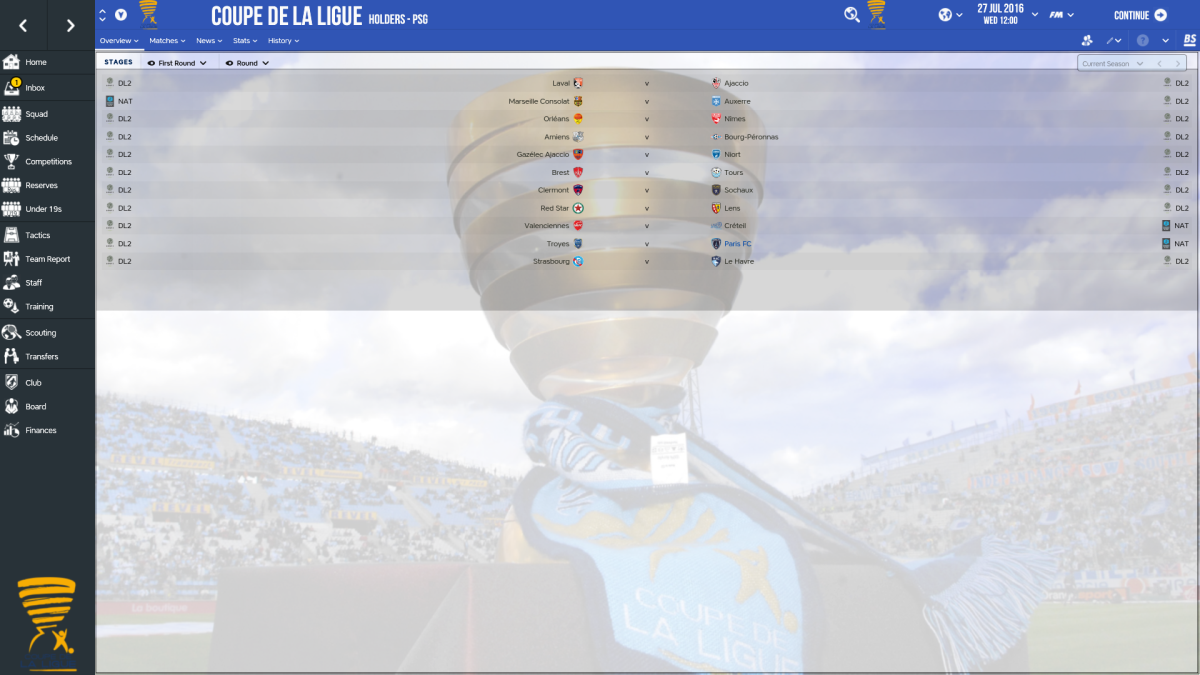 You need some more width

ScottT
4 years
Ahh Troyes I remember them, they were relegated about 2 months before the snd of the Ligue 1 season last season. Hopefully they're still as shit and you can win