Ory1997
10 years
Maybe because Deolofeu is doing personal training as in trying to learn anew habbit for example passing instead of shooting or dribbling down the right flank or he could be tutored be another person, maybe he's injured or Nani's injured. Or you simply can't because their status in terms of fame are close. The last part I notice when Nani was able to tutor Lorenzo Crisetig even though Cristig was already way better.
1
Login to Quote

Ory1997
10 years
So while most of you know that I manage Manchester United, most you of you do not know that I also manage the England U 21. Well I'm writing this because I just won the Euro U 21 with them, beating Germany in the finals(seriously must all my European competition finals end after beating Germany e.g. Season one beat Dortmun in ECC and Bayern in Super cup, Season two beat Bayern in ECC and Germany in Euro U 21). Well the game ended in a 4-2, Dean Keane scored a hat trick, and forced an own goal and Andrew Love made an assist. BTW all finals ending this season ends with me scoring four goals: ECC vs Bayern: win 4-0, League Cup vs Blackburn: win 4-0, F.A. Cup vs Arsenal: win 4-1 and Euro U 21: 4-2.
Login to Quote 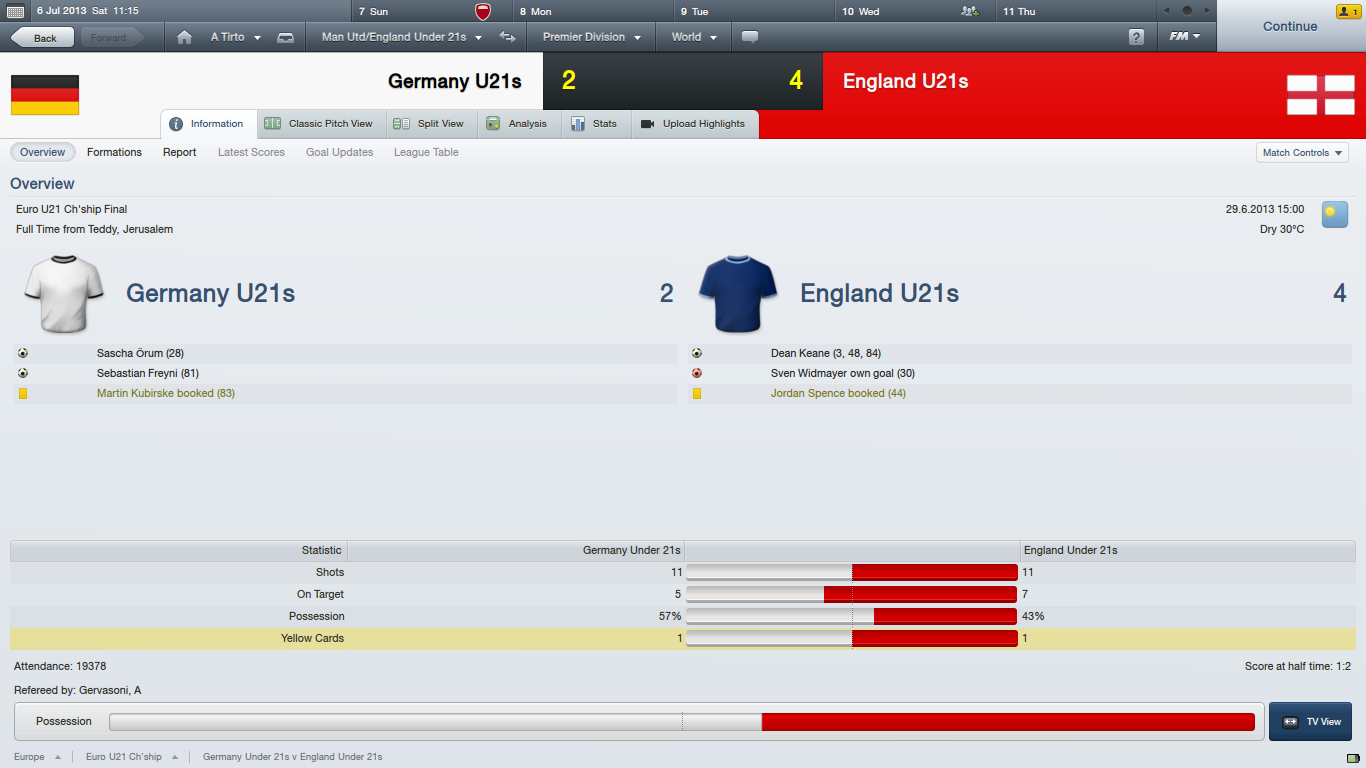 nakulp
10 years
Wow hes a complete beast!! I want to buy him lol
Login to Quote

that's definetly a star for the future!!!
Login to Quote

Ory1997
10 years
Everton and Villa wants to buy Dean and Andrew, but their offers were pathertic around 3.5mil-6mil. These two are going to be the next generation of greats in Manchester United, England and the world. Dean currently lacks creativity so he can't be the next Rooney, so either he's the next Michael Owen(in his prime) or the next Shearer(even though I have no clue what his stats are at his best). Andrew is going to be the next Beckham, his speed is also improving.
Login to Quote

Ory1997
10 years
Hi again and thanks to all who is reading this post for having the patience to wait for updates, I know I don't update often because this isn't really a story, infact it is a forum, hungry for information and on the enternal search for ways to be more informative and accurate. This forumn was at first meant to show off my England and Manchester United future stars, then it just became future stars and then ways of making future stars. Please feel free to post the attributes page of your own youngsters and tell me what extremem stunts he's done, how you had developed him or if you need help.

Right now I'm doing a project what I call the "Youth Cycle" it will tell any readers the best action to take when a player is at a certain age. However the ideas are still roughly sketched in my head and I still need to record accurate calculations of my youths' attributes.For example if a striker I'm going to use as a poacher is in development,at the age of 17, and his Poacher stats add up to X I would loan him, however another youngster who is at the age of 16 and is in my plans to be the next great Advanced Playmaker, his stats adds up to Y, based on this I get an older player that would benefit him the most to tutor him.

When the players get to 24 they are no longer youngsters but are eligiable to tutor, if done correctly they would have the skills, mentality and playing style that is favourable to tutor the next generation, hence starting another "Youth Cycle".

I'm also creating a sub project which is part of the Youth Cycle, it just about tutoring, the information will be about what kind of playing style a specific player, in a specific position, in a specific role should have and extras that would benifit. This links to tutorship as it is the most efficient and effective way to improve a players attributes and teaching them a playing style at the same time. It's probably already explained many times online and I would not claim credit for things I didn't find myself. I feel that this sub project would be important to my main project hence me making a detailed research. I name this project
"The Family Tree" because like living things some traits are passed down, in this case its to the younger player and not a child and the traits are attributes and playing styles and not blue eyes and pink hair.

One again feel free to comment and post any ideas, this would benefit me and everyone else who reads the posts.
Login to Quote

Ory1997
10 years
Dean just got his first cap for England, no fireworks though as England was defeated 0-1 againt Turkey. I'm also disapointed because this mean the current England manager may use him again when I'm having a U 21 competition, which could backfire on my plans on getting him fired so that I can take over. I hope he doesn't take my Andrew Love next as he is the only talented winger in the U 21 team. Should I just pray that Stuart Pearce, the current England manager, will get fired or should I take a first team national job so I can help myself to get him fired? It's 2013, the World cup is coming next summer and I really want to win the competition with England.
Login to Quote

If possible, loan them to Premier League teams.
Login to Quote

Ory1997
10 years
Yeah I offered them for loan but no one wants, so I loaned Dean Keane to FC Twente and Andrew Love to Sparta Prague. Dean is not doing so well, scoring only 1 goal, a penalty, in 3 games although I hope I hope international matches do not stop him from playing more. However Andrew Love is doing really well in Sparta Prague, 4 games, 4 goals, 2 assists, 2 MoM and has an average rating of 8.40. He complains that theleague is too easy so I might pull him out of the loan in January and put him in FC Twente or develope him in my club. I just recently sold Ashley young and loaned my Eduardo Salvio so I only have Nani as right wing, so I need a back up right winger.
Login to Quote

Ory1997
10 years
Dean Keane's form in Twente is improving, since scoring only once in three games he scored twice in the three games after. However if Twente is in the 13th position and it's already late September, I'm afraid that Dean is not played correctly along with Delofeu and Kovacic by the Twente manager so I might pull them out as I fear that bad performances by the club might stick onto the players and cause them to play badly, causing to bad development.
Login to Quote

Ory1997
10 years
Yeah I'm doing that except it's in a story format, is there a link to make a guide?
Login to Quote

Well as you can see Keane scored half of the goals...
Login to Quote

Ory1997
10 years
The next England star. Possibly, not as naturally talented as the other two but his rating of the previous match shows he's a great midfielder, he plays like Phil Jones when played in DM or CM, but Jones is not really a legend, yet. So this guy is probably the next Ferdinand as I don't know another English player above 27 who has similar attributes shape in their prime.

You are reading "Future England and Manchester United Stars".