yeah he was transfer-listed at Wolves, he may be getting on a bit but I need some experience.
1
Login to Quote

Eastwood Claim Famous Point. The superstars of Chelsea were held to a point by a plucky Eastwood Side. Despite having a hatful of chances, Chelsea could only find the net once and an error by Eden Hazard gave the Badgers a point to embarrass the blues.

Spurs Ease To Victory. The brave badgers proved no match for Spurs as the visitors ran out easy winners. Eastwood got some consolation goals but that’s all they were.

Quality Finishing Provides The Win. In an even game at Coronation Park, Eastwood recorded a vital win over bottom club Newcastle. The Badgers scored 3 goals in a ten-minute spell that effectively won them the match; the Magpies hit back in the second-half but never looked like spoiling the Badger’s party.

Liverpool In Dominant Win Over Badgers. Eastwood travelled to Anfield in more hope than expectation and the Reds put in the sort of performance expected of them to walk out 3-1 winners. 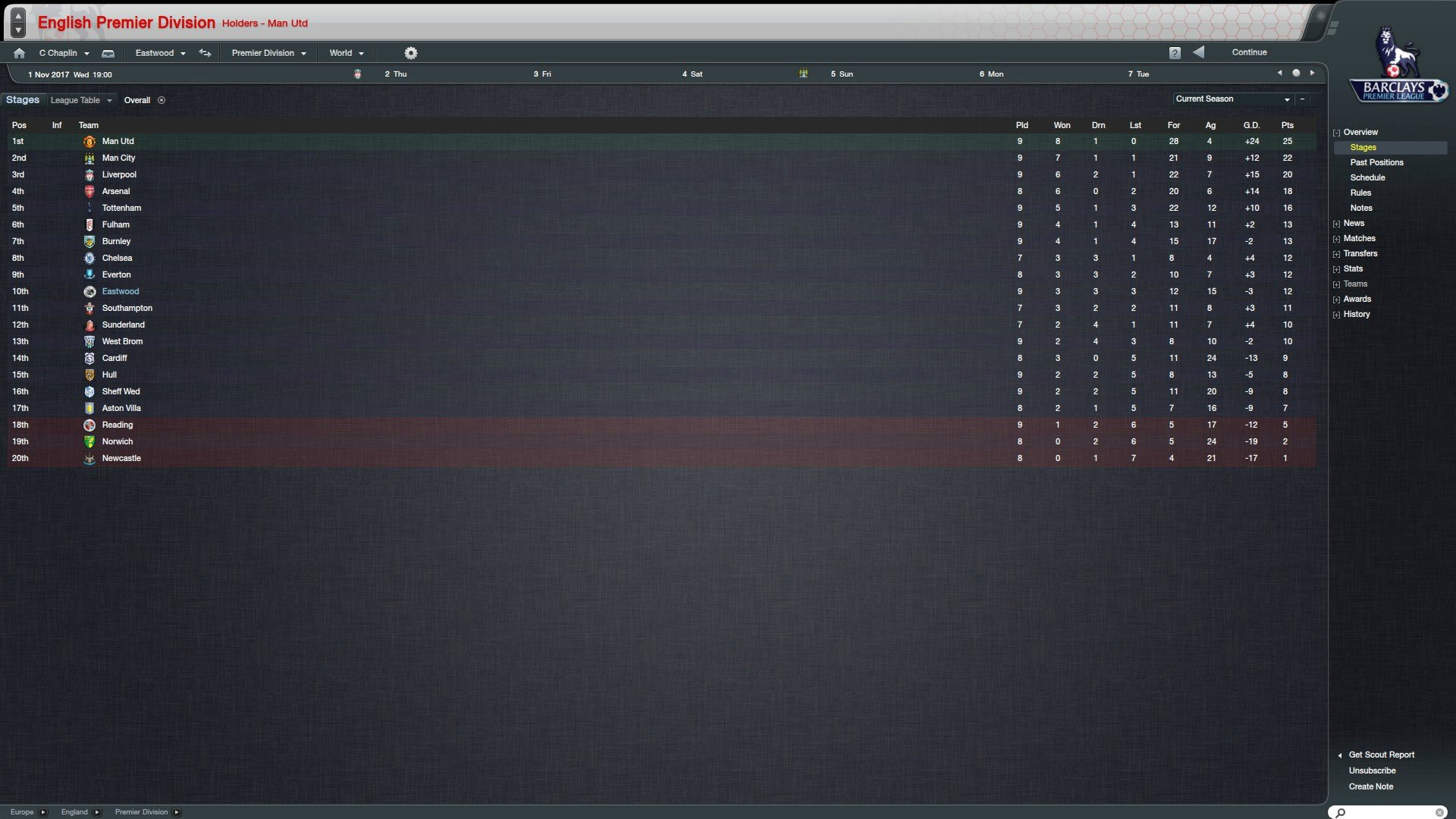 Eastwood Town are 9th with 12 points

City Leave It Late To Deny Eastwood. Eastwood travelled to oil-rich Man City hoping for a good performance rather than a win and almost walked out famous winners. Eastwood controlled the game for long periods and two goals in second half stoppage time denied them a win.

Honours Even At Coronation Park. Fresh from a famous draw, the Badgers entertained Aston Villa in a close encounter. Joe McKee gave Eastwood the lead but Darren Bent equalised just after half time to share the points.

Eastwood Record Overdue Win. In an important match with relegation permutations, the Badgers recorded a vital win thanks to a storming second-half performance.

Five Star Eastwood Triumph. In another relegation six-pointer, Eastwood picked up an important win. The Badgers played Wednesday off the park to record a big win to boost survival hopes. 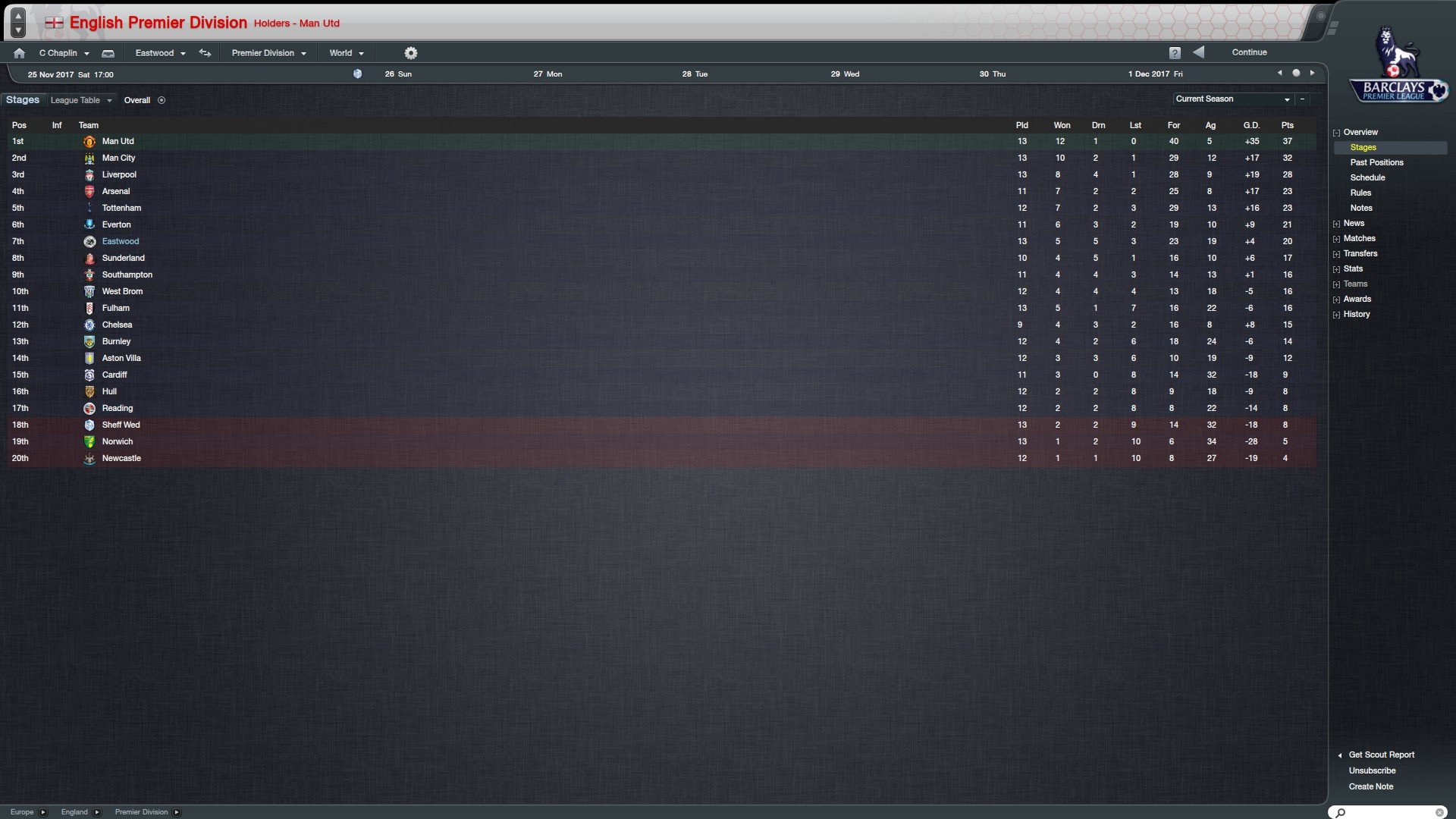 Southampton In Control. Eastwood kicked off December with a home defeat against Southampton, Saints dominated affairs and fully deserved their 2 nil win.

Badgers Take Vital Win. In an even game at Carrow Road, Eastwood Town recorded a good victory in a relegation battle with Norwich. The Badgers are confident of avoiding relegation having a good first half of the season.

Honours Even At Coronation Park. Eastwood Town recorded a somewhat lucky win at Coronation Park. Everton carved opened the Badgers a number of times but couldn’t put their chances away. With time running out, Everton grabbed a late leveller.

Sunderland In Deserved Victory Over Badgers. Eastwood travelled to the Stadium Of Light to take on Sunderland and fell to defeat. Sunderland put in a good performance to beat the battling Badgers.

Forgot to take a screenshot of the League Table but we have 24 points, well on our way to avoiding the drop

Eastwood Hammered By Man United. Eastwood made their first visit to Old Trafford and were handed a heavy defeat.

Eastwood In Good Draw. In a close match at Coronation Park, the points were shared with a visiting WBA. Both teams had chances to win it but the Badgers will settle for a point.

Badgers Through In Cup. Eastwood Town renewed their rivalry with Rotherham in the FA Cup. After a dull first-half, Eastwood showed their Premier League class after the break to pick up the victory.

Badgers Flattened By Bluebirds. Eastwood Town never really turned up to their match against Cardiff. All the goals came in a frantic first-half which Eastwood would rather forget.

Fulham Grab Deserved Win. Eastwood Town continued their poor run of form in the league with a defeat against Fulham. The Badgers are just hoping they will be in the league this time next season.

Eastwood’s Poor Form Continues. Another home game, another defeat; making this a month to forget for the Badgers. 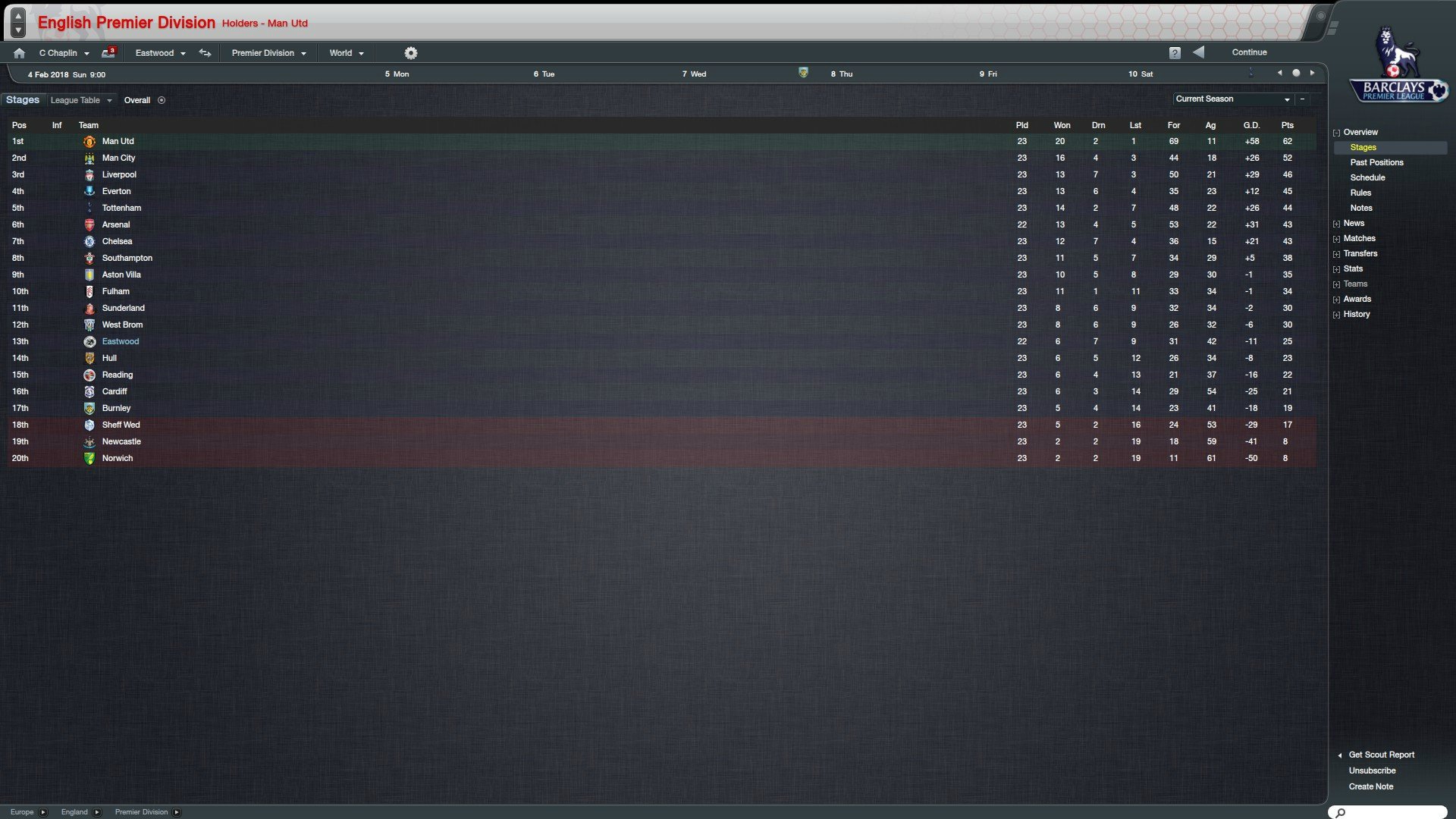 FA Cup: Fourth round - Vs Brighton (A)
League Cup: Lost in third round (v Sunderland)
Login to Quote

Goals Galore As Eastwood Draw. The FA Cup provide a welcome distraction from the league for Eastwood and they played out a very entertaining draw at the AMEX Stadium. Eastwood led three times but just couldn’t keep the lead and have to settle for a replay.

FA Cup Draw: Eastwood or Brighton will be at home to Blackburn

Eastwood Return To Winning Ways. In a tight match against relegation rivals Burnley, Eastwood recorded their first win for a while with a good performance. The Badgers show that they are better than the bottom sides but just not good enough for the top teams.

Spurs Ease Past Badgers. Spurs managed to beat Eastwood Town at White Hart Lane and put a few goals past them in the process.

Eastwood Hammer Brighton. The Badgers put in a dominant performance against Brighton to progress in the cup. Eastwood created many chances and the scoreline did not flatter the Badgers at all.

Chelsea Edge Past Eastwood. Chelsea were made to work for their victory at Coronation Park. Eastwood were capable of putting a scare in the Blues and the Badgers took a deserved lead. The quality of Chelsea shone as they rallied to score a victory.

Eastwood In Control. The Badgers put in a polished performance to beat Blackburn at Coronation Park to progress to the quarter finals of the FA Cup. Lehlohonolo Majoro continued his scoring run to continue the Badgers cup run.

FA Cup Draw: Eastwood will be away to Swansea in the quarter-final 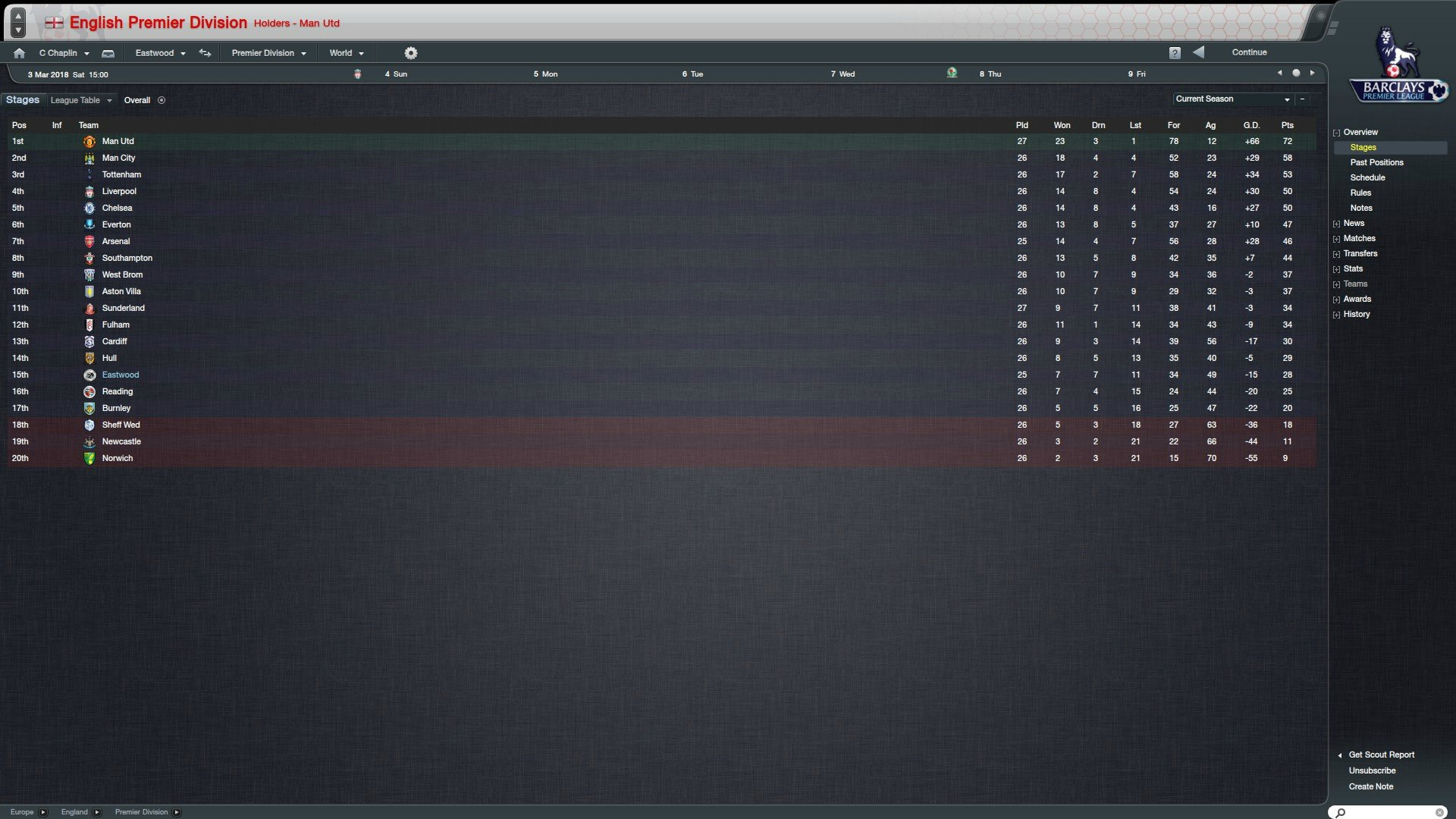 Liverpool See Off Badgers. Eastwood Town battled hard but in the end, Liverpool proved their quality with a big win.

Eastwood Unlucky In Defeat. Despite having the best of the game at St. James’ Park the Badgers left defeated. Newcastle took a massive step towards safety with a stirring second-half performance.

Badgers Pull Off Major Upset. Eastwood Town secured what is their greatest victory to date with a win over mega-rich Manchester City. City dominated the game but Eastwood held firm and hit them on the break to secure an unlikely victory.

Eastwood Ease To Victory. The Badgers put in a dominant performance to go through in the cup. Eastwood never looked like losing at the Liberty Stadium and Lehlohonolo Majoro put Swansea to the sword, scoring a great hat-trick.

FA Cup Draw: Eastwood will play Arsenal in the semi-final

Arsenal Battle To Victory. In a preview of the upcoming FA Cup tie, the Badgers just expected a good performance. In the end, they battled hard and would have got a point if not for some good substitutions by the Arsenal manager. 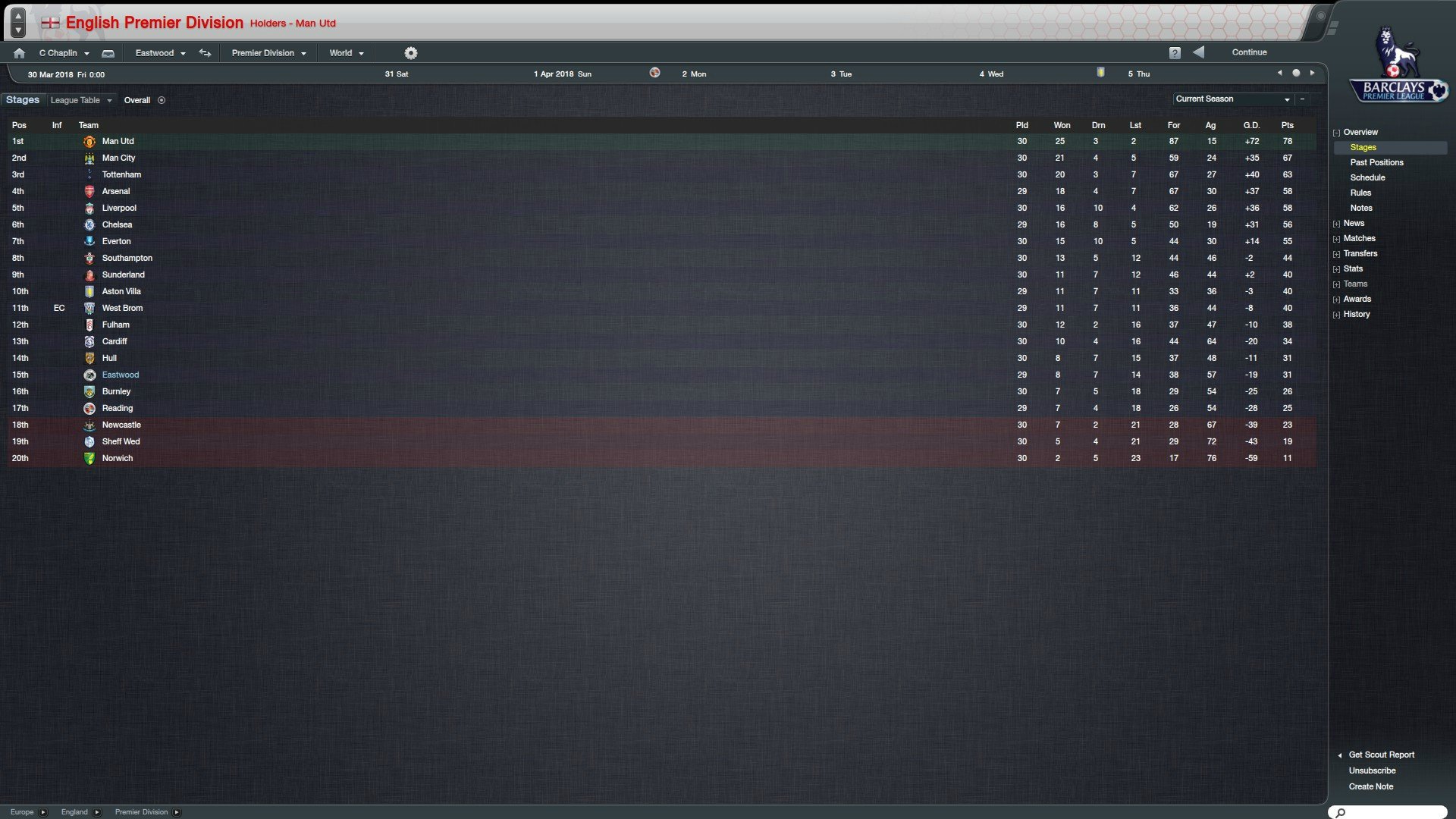 Eastwood Town 15th with 31 points ... 8 clear of relegation. I only need another 9 points to hit my target to stay up.

Badgers Edge Towards Survival. Eastwood Town knew that the upcoming games against the bottom teams would be crucial in the fight to stay up. The Badgers put in a great performance to beat Reading at keep their heads above water. Lelohonolo Majoro scored an excellent brace to send the Badgers fans home happy.

Badgers Rue Missed Chances. Eastwood Town gained a good point at Villa Park but should probably have left with all three. The Badgers kept possession well but couldn’t convert these into clear-cut chances.

Eastwood Win Relegation Battle. Eastwood Town gained some form at the right time to get a victory over Sheffield Wednesday. The Badgers had pretty much all the best chances and managed to put two away to give themselves a vital three points.

Eastwood Strike Lucky. Norwich travelled to Coronation Park knowing that by full-time they could be relegated. The Badgers managed to record a smash-and-grab victory to condemn the Canaries and boost their survival hopes.

Arsenal Ease To Victory. Eastwood Town’s record-breaking cup run came to an end at Wembley. Arsenal put in a performance that is expected of a top team and brushed aside the Badgers.

Southampton See Off Badgers. Despite being a match for their opponents for most of the match, Eastwood Town slumped to a defeat. The Badgers are 10 points clear of relegation with 4 games to go so they could have safety wrapped up by the next month.

Eastwood Town Beaten But Secure Survival. Even though the Badgers went down to a defeat at Craven Cottage they secured their safety. 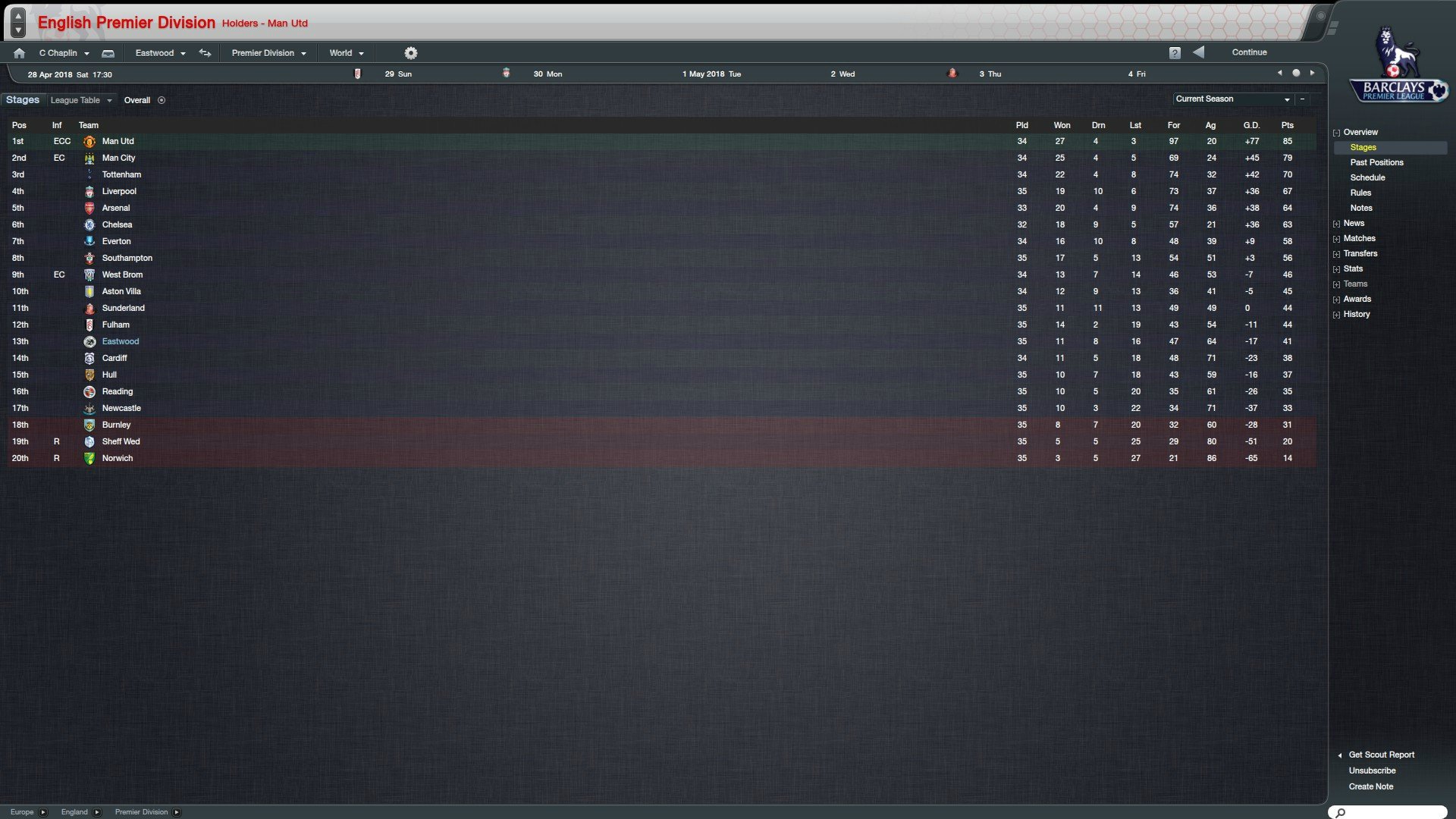 Arsenal See Off Badgers. With safety assured, the Badgers fielded a second-string side at home to Arsenal (screw competition integrity … right?). Arsenal did what was expected and recorded the win.

Everton Ease Past Eastwood. Eastwood went to Goodison Park and fell to a defeat against Everton. The Badgers battled hard but couldn’t match their opponents.

Sunderland Beat Badgers. In their last game of the season, Eastwood hosted Sunderland. Sunderland eased to victory with two goals in the second-half. Eastwood are glad to finally end the season and are ready to build for next season. 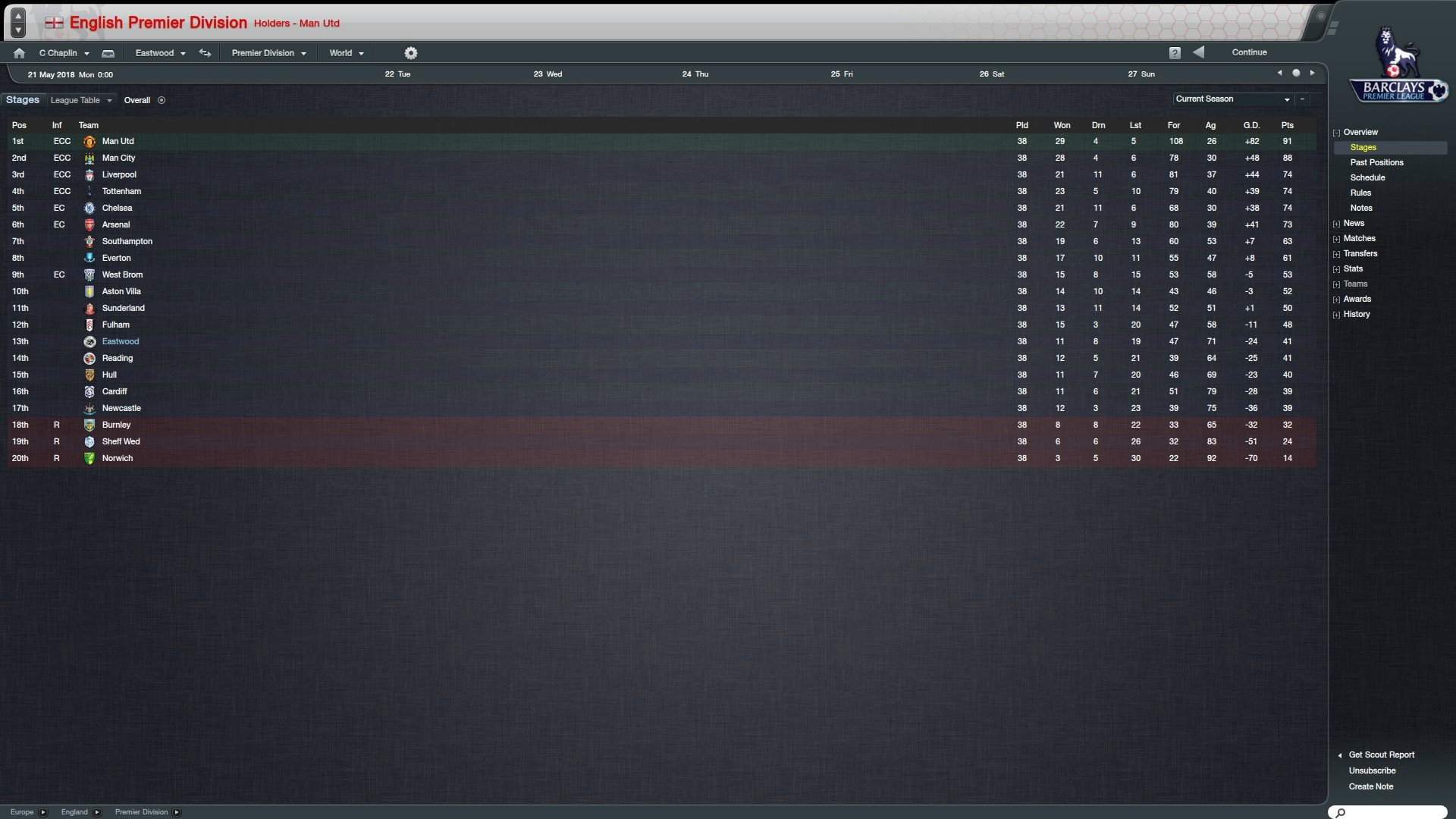 Eastwood finish 13th with 41 points. This season was a bit draining but we are still a premier league club! Next season we can build on this and hopefully won't be sucked into a relegation battle.

Mattzey
10 years
Can you show me all the other league tables please?
Login to Quote

#55318 Mattzey : Can you show me all the other league tables please?

which other league table do you want?
Login to Quote

Mattzey
10 years
Btw loving this story!
all the English league tables down to league 2. Thanks
Login to Quote

#55320 Mattzey : Btw loving this story!
all the English league tables down to league 2. Thanks 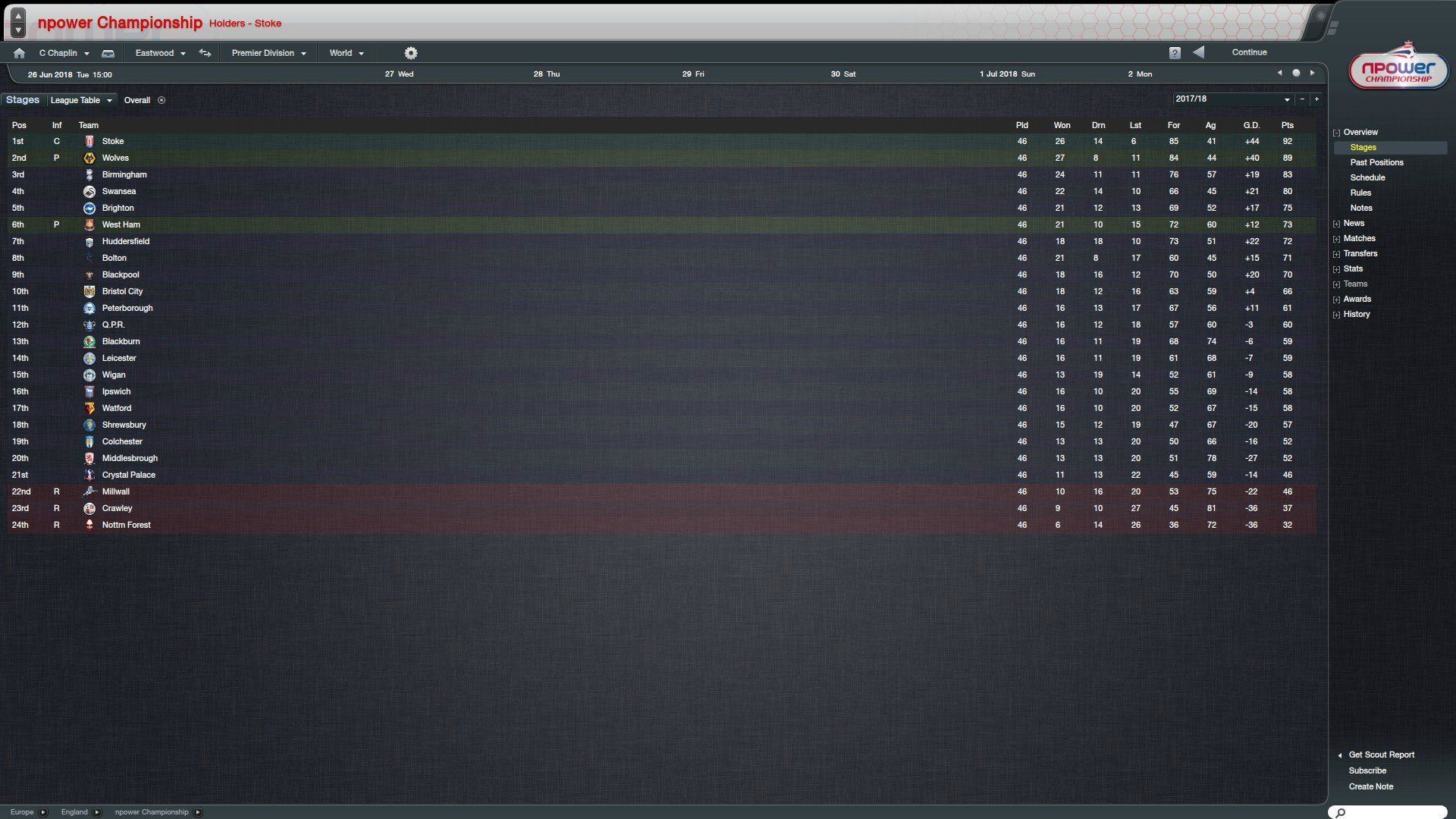 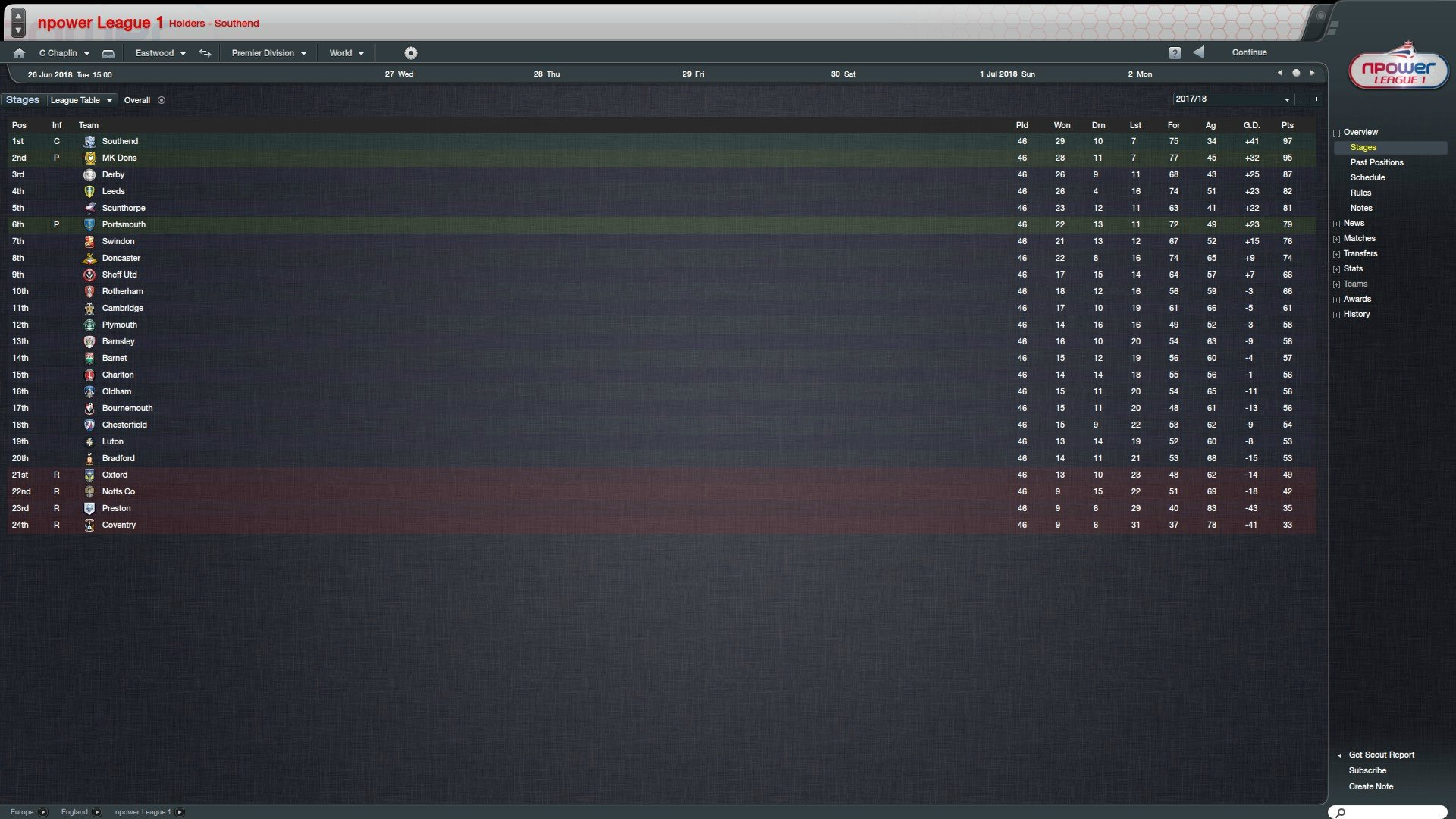 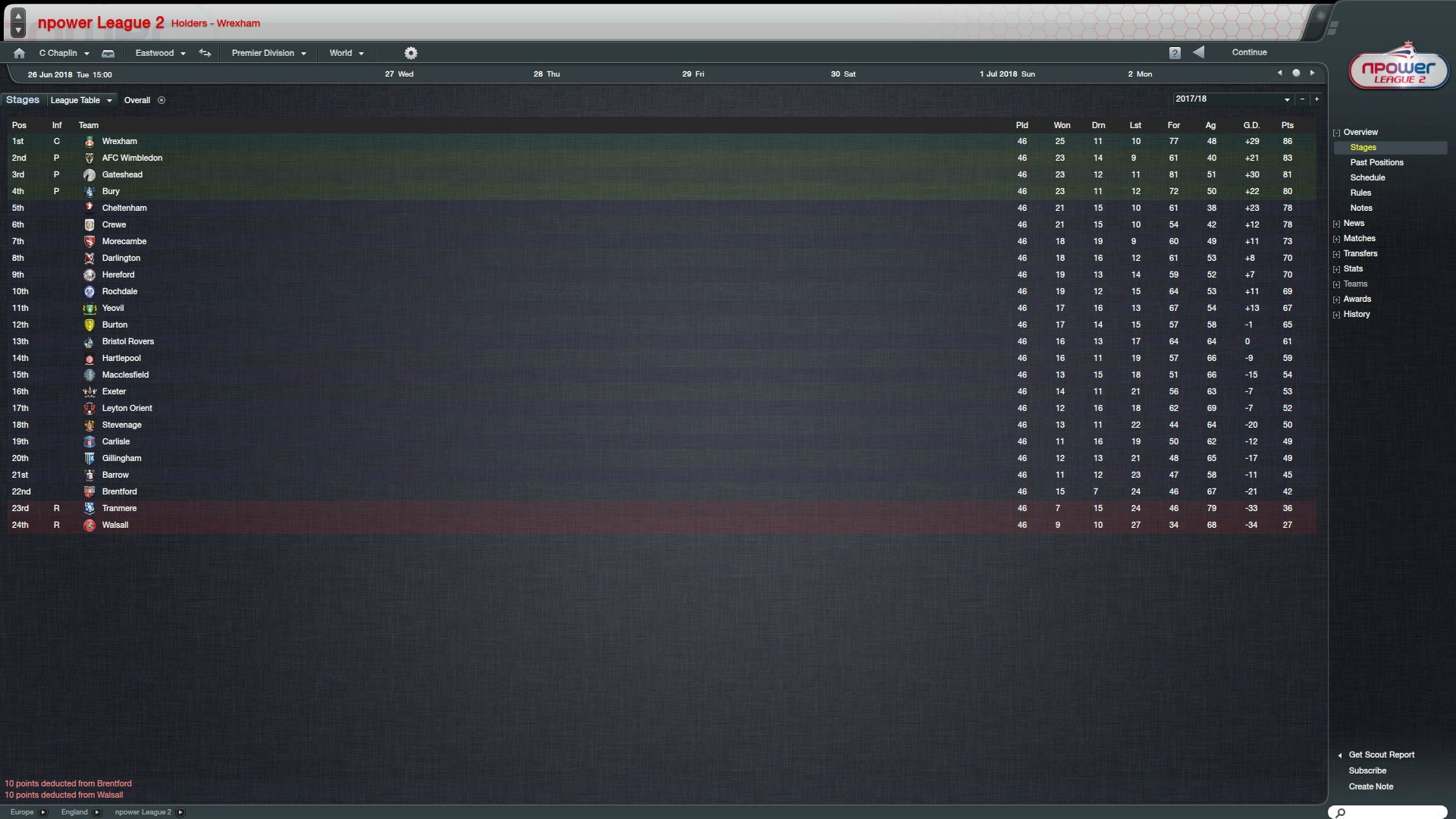