Sporting_23
10 years
you are very close of achieving a great acomplishment! go badgers!
1
Login to Quote

Eastwood Escape With Point. Fulham had the best of the game against a plucky Eastwood team but just couldn’t break down their defence. Connor Wickham put the Badgers ahead early but Fulham hit back just before half-time. The second-half was an onslaught but the Badgers survived.

Eastwood Hold Firm For Victory. Eastwood Town put on quite a show in their last home game of the season, beating Spurs three-nil. All three strikers linked up well to carry on the tradition of giants falling at the Eastwood Stadium.

Eastwood Secure Europa League Spot. How fitting that the last match of the season became a winner takes all match. Because of the domestic cups, only 5th place in the league would guarantee a spot in next seasons Europa League. Eastwood knew if they avoided defeat, Manchester United would not pass them. Manchester United had the best of the game and wasted multiple chances to win the game. Eastwood may have been lucky to draw, but they finish 5th, an amazing achievement; especially to seal it at Old Trafford. 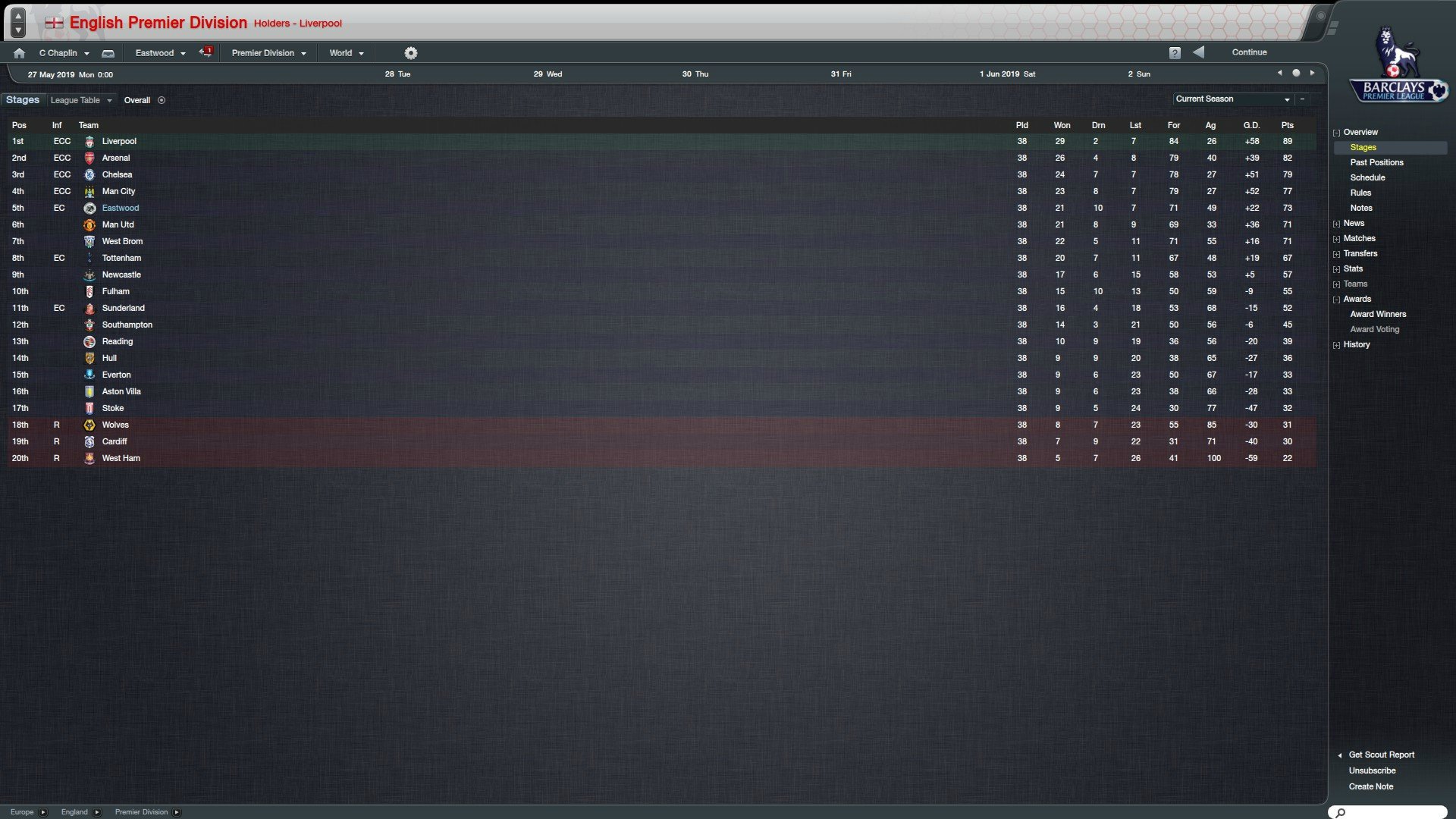 Eastwood Town finish 5th, just edging out Man Utd! The Badgers have got to Europe!

Sporting_23
10 years
could you post a screenie of mbaye niang? thanks 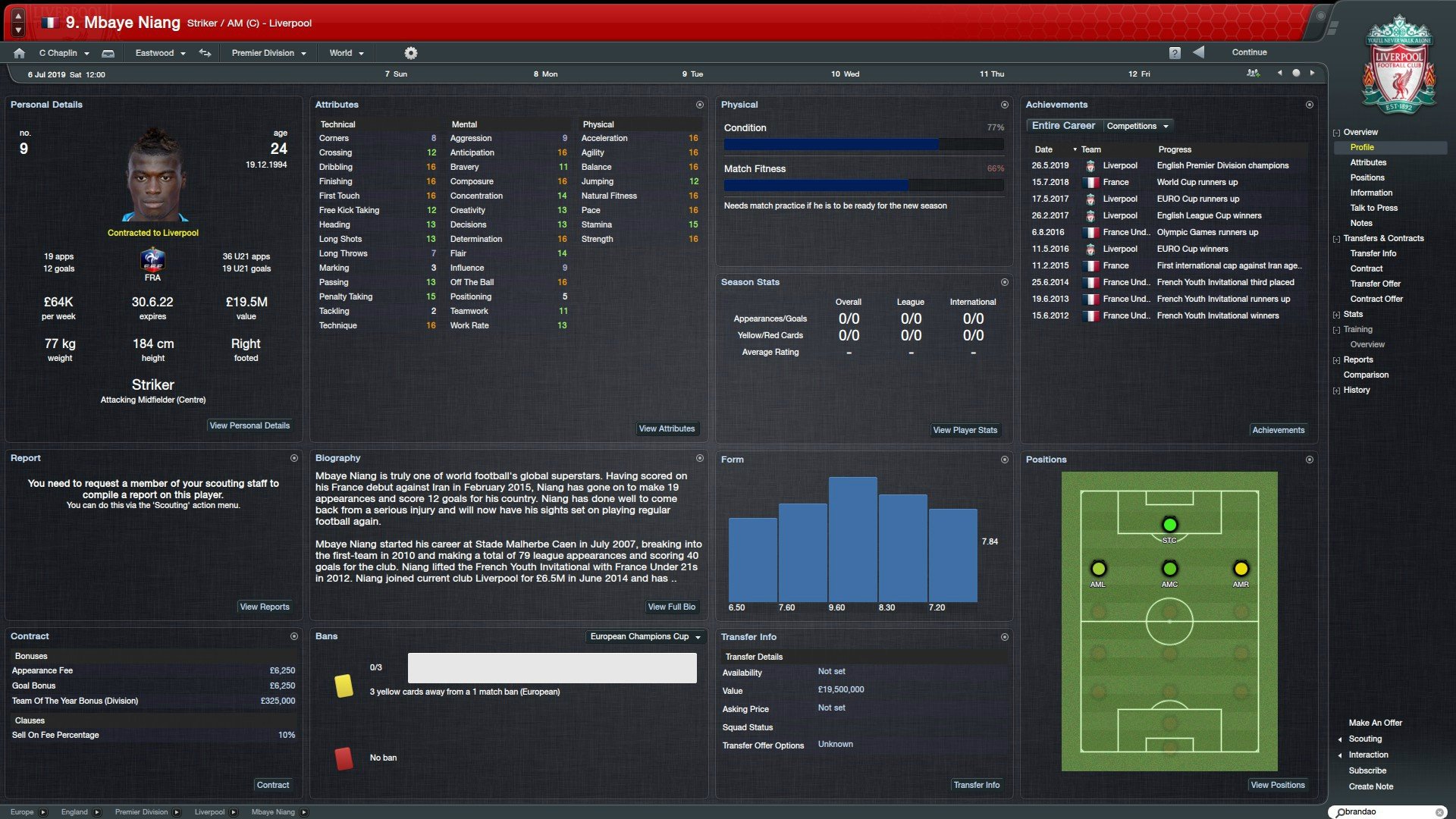 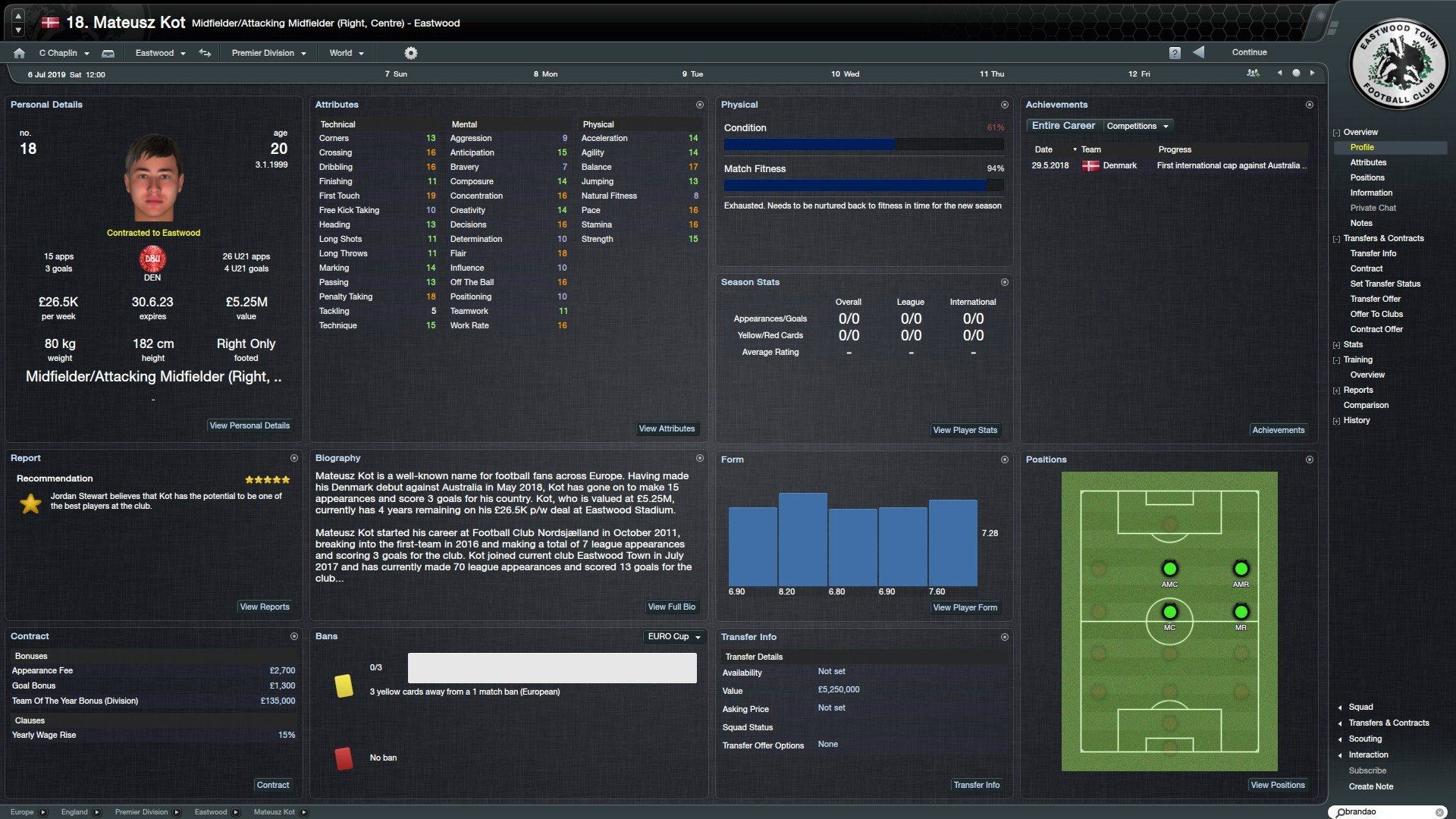 This is my wonderkid Mateusz Kot, I just rejected a £15M bid from Chelsea, I want to build my team around him. Not bad for a free transfer! 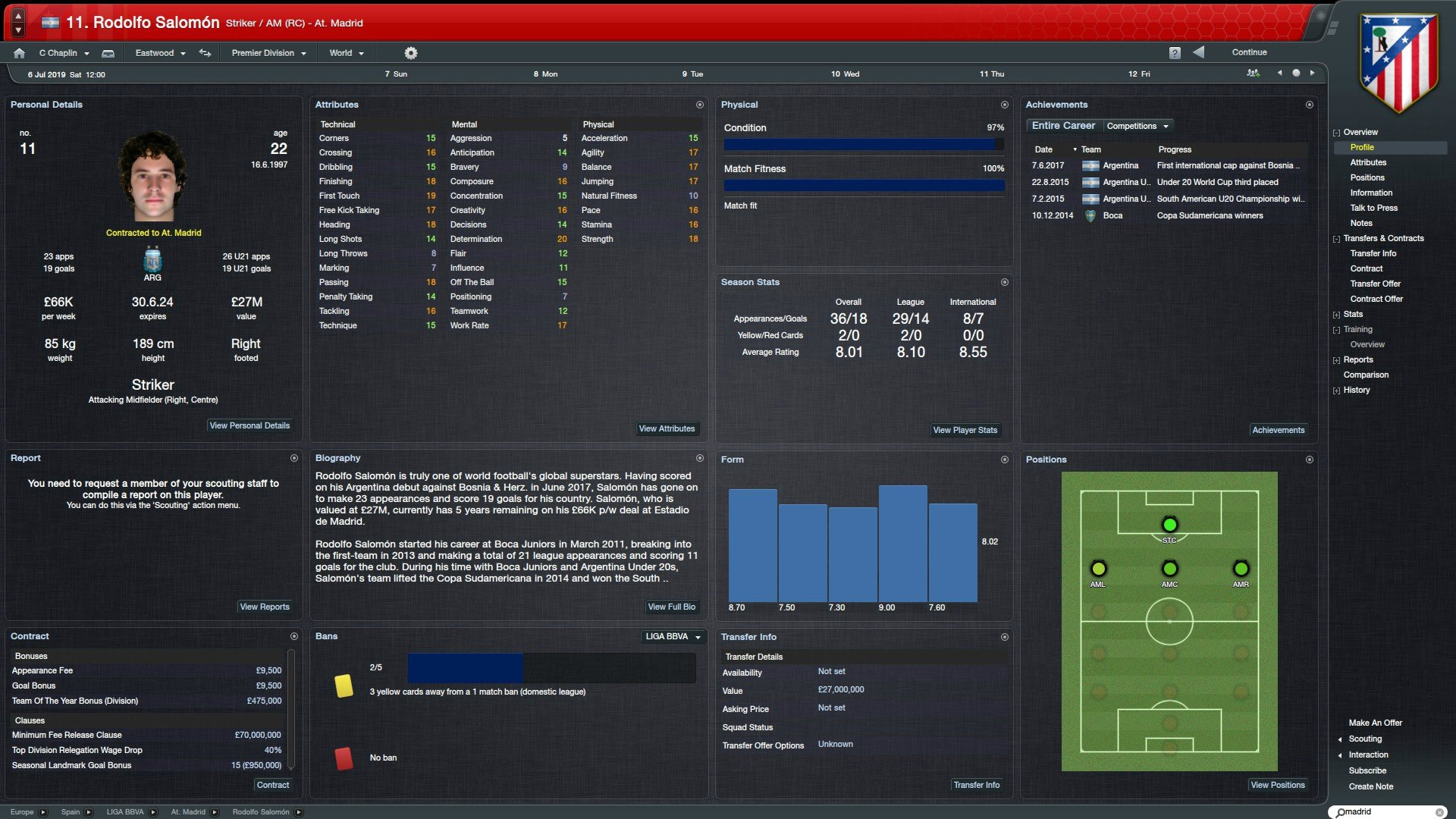 kingcraigan
10 years • Edited
Eastwood Town Season 9 – Premier League & Europa League
After many seasons. Eastwood now get to try their hand in Europe. Can the Badgers compete for both domestic and European honours?

Board Requests
Stadium: To be expanded by 8312 seats to 24937 seats
Training Facilities: Upgraded
Youth Recruitment: Upgraded


Season 9 Target – Challenge for honours on all fronts, gain European qualification again
Transfer Budget - £19.11M
Wage Budget - £676K per week
These budgets should be plenty for me to attract some good signings to club to move them forward. I am really excited to begin this European adventure!
Login to Quote

Some good transfers in this summer, tried to use my budget to get my squad depth up as we will need it now we are competing in Europe. It’s a shame that no one buys the players I don’t want, but that is a consequence when you get players to play better than their level of ability.
Login to Quote

Never really cared for friendlies, so I let my assistant take care of them.
Login to Quote

priyesh0987
10 years
Congrats mate on the awesome story. You inspired me a lot to start once again from a lower league team.

But I am again disappointed. I had started with a lower league team 3 times before this and all the time, whatever i try my team would end up losing all the matches. Not even a single match won. Either a draw or lost. Used Jamil Adam in all my saves, and he ended up being the worst striker ever.

This time getting inspiration from you, even i started with Eastwood town. Have been reading a lot about Jamil Adam. So got him and used him either with Green, Morris, Edwards. But no luck. Even rested him for few matches, thinking that proper rest will help him. Still no luck.

My team won all pre-season friendlies. Won the first match of the league. And from then, its been 12 matches. I am still waiting for my second win in the league. Jamil Adam has played 8 matches till now and has scored only 3 goals. Gavin Caines the defender is top scorer with 5 goals. And other strikers hit a goal here and there. But I can't win a single match.

Using Jamil Adam as Poacher and the other striker as Target man. Tried the reverse also, with Adam as Target Man. But nothing seems to be working.

Please help me. I really want to play with lower league team. I don't want to start with a big team playing in all competitions. I want to make my way up till there.
Login to Quote

kingcraigan
10 years
I always try to stick to simple tactics and its important to always keep morale up. During pre-season friendlies I set my tactics training to team-blend and very high then tone it down once the season begins.

Jamil Adam tended to start slowly for me then really gets going after a few months.

I don't really know what to suggest other then just keep trying.
Login to Quote

Badgers Open With Win. On a sunny day at the Eastwood Stadium, the Badgers kicked off their win with a good home win against Fulham. Exciting centre-back Callum Green got Eastwood going and they never looked back from there.

Eastwood Bring Pain In Spain. What was billed as an easy win for Bilbao ended up being a big victory for Eastwood and the English team now have one foot in the group stage. The game itself was fairly even but the Badgers took their chances when offered to record a good win.

Eastwood Sail Through. With most of the heard work done in Bilbao; Eastwood could afford to field a changed team for the visit of Bilbao. The result however, was not changed as Eastwood walked out clear winners and into the Group Stage.

Eastwood Ease Past Peterborough. After their exploits in Europe, Eastwood looked a little rusty coming into this match. Although not at their best, their opponents handed the Badgers 2 own goals to give them the victory. 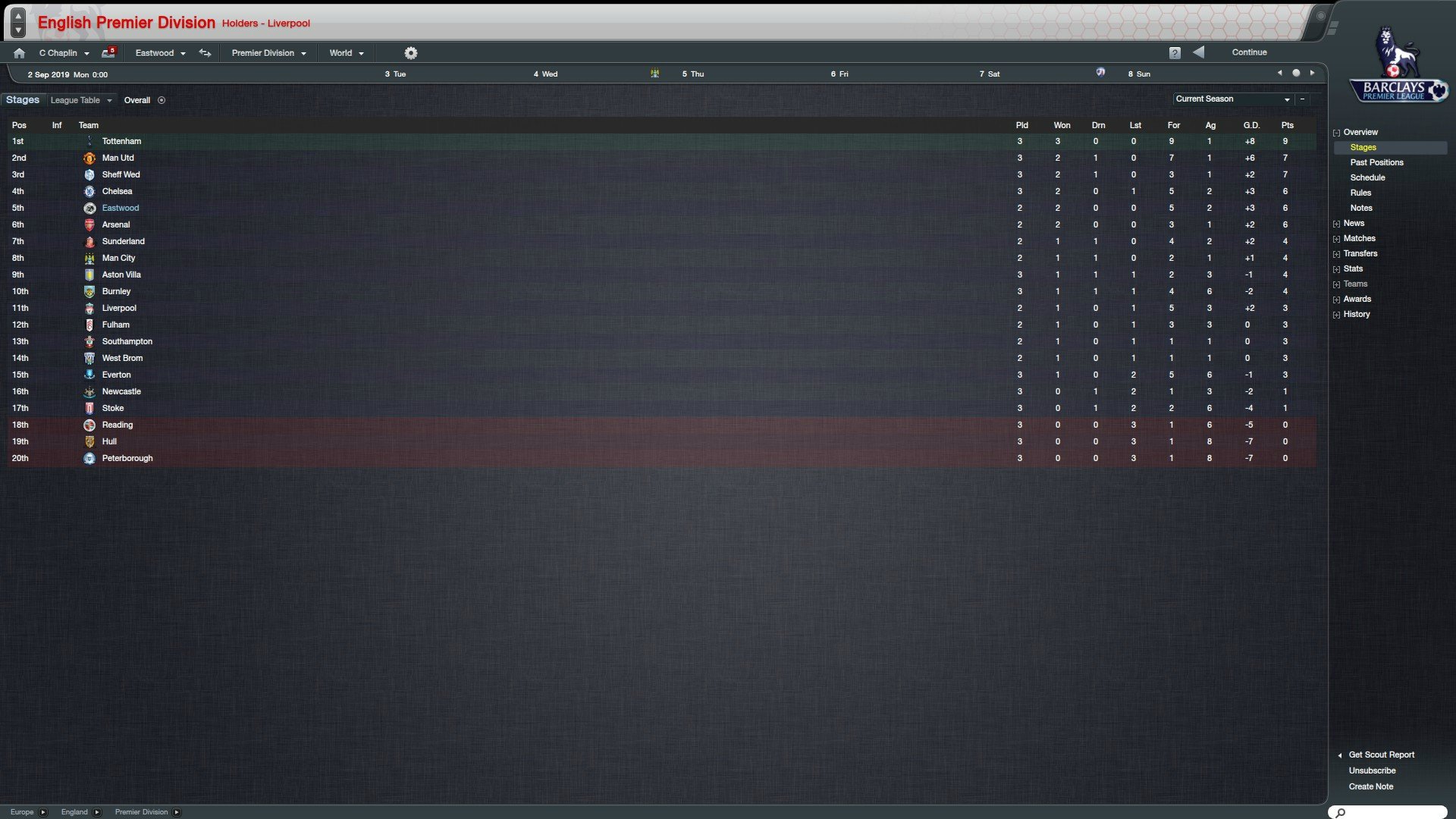 gooner4eva
10 years
every time I read this story it just gets more and more amazing, absolutely astonishing how well you've done with Eastwood, I give it 2 more seasons until you will be Premier League Champions