Callum the Toffee
9 years
I bet Jamil Adam is feeling pretty stupid moving for the money now!
Login to Quote

#54935 Callum the Toffee : I bet Jamil Adam is feeling pretty stupid moving for the money now!


he ended up playing for stevenage for a year or so then retiring, Akwasi Asante passed all his goalscoring records (quickest goal, most goals in a match, most goals in a season, most goals for the club) so he really will be kicking himself
Login to Quote

Eastwood Town Announce New Stadium Plans
The board today announced that following promotion they will be building the Eastwood Stadium, the capacity is 16,625 with room to develop. The Chairman took out a loan of £21m to build the stadium and injected £2m to cover running costs, leaving Eastwood’s finances as insecure.
Login to Quote

Callum the Toffee
9 years
I don't think you should worry too much about any new owners, surely you're unfireable right now!
Login to Quote

Sporting_23
9 years
whats you're transfers and salary budget?
super congratulations on getting them to the premier...on the first year of championship football! thank you for putting up this story! ;p
Login to Quote

kingcraigan
9 years
I'll post the budgets once I have some time to play. I don't think I could be sacked but I remember playing a game a few years back where I took someone from League 2 and they were talking about sacking me until it fell through.
Login to Quote

kingcraigan
9 years
Eastwood Town Season 7 – Premier League
Here we are, the dream came true. Can Eastwood make an impression at this level or will be be a swift return to the championship?

Eastwood Chairman Steps Aside
The Eastwood Town chairman Tony Minnis has decided to step down from his post with immediate effect. Director and local businessman Robert Yong has made his transition into the big office. Robert Yong has also told me my job is safe (hooray!) but that there are no plans for more investment (boo!).

)
Transfer Budget - £10.33M
Wage Budget - £133k per week
pretty decent budget I suppose with all the developments at the club, lets smash Eastwood's transfer record which currently stands at £450 and a mars bar.
Login to Quote

Some quality transfers in, managed to get some top-level experience mixed with some younger guys. I love my utility players, really useful for injuries and fixture congestion. I think we have enough ability to keep us in the league this season but I’m excited to see how we’ll do against the big boys.
Login to Quote

Callum the Toffee
9 years
I'd say that was some excellent business in the summer, and well done for keeping your job! 10M is a tasty amount for a newly promoted team. What year are you in right now? I'm guessing maybe 5 or 6 years down the road? (can't be bothered to work it out xD ) who's winning footballer of the year and whatnot right now? have the wonderkids overtaken the established talent yet?
Login to Quote

#55049 Callum the Toffee : I'd say that was some excellent business in the summer, and well done for keeping your job! 10M is a tasty amount for a newly promoted team. What year are you in right now? I'm guessing maybe 5 or 6 years down the road? (can't be bothered to work it out xD ) who's winning footballer of the year and whatnot right now? have the wonderkids overtaken the established talent yet?

Champions League Champions – FC Porto
Since the 2011/12 season, the winners have been Manchester United, Liverpool, FC Bayern, Manchester City and FC Porto (they retained the cup)

Some Random Events
Nigel Adkins is Manchester United manager
Rafa Benitez is the Arsenal manager
Gianfranco Zola is the Chelsea manager
Alan Shearer is the England manager
Frank Rijkaard is back at Barcelona, Guardiola went to Spain.
Tim Howard was the Barcelona keeper for a while
1
Login to Quote

Callum the Toffee
9 years
Interesting, thanks for that

surprised Hazard, Neymar or Gotze haven't made it to Player of the Year yet. Pep tends to go to Spain on my games too :p good luck next season! Realistically, would you be happy with 17th?
Login to Quote

#55057 Callum the Toffee : Interesting, thanks for that

surprised Hazard or Gotze haven't made it to Player of the Year yet. Pep tends to go to Spain on my games too :p good luck next season! Realistically, would you be happy with 17th?

I'd be really happy with that, the main aim is to stay in the league, get all the financial rewards that go with it and keep pushing on.
Login to Quote

Only a few friendlies this season due to cancellations but got some goals and picked up no injuries … success!
Login to Quote

Eastwood Town Send Out Message To League: “We are not pushovers!”. Eastwood’s first game in one of the best leagues in Europe was also one of the biggest; reigning champions Manchester United. The Badgers threw everything against their opponents and the match turned into a real battle. In the end 2 brilliant finishes by world-class players gave United the win but Eastwood had 4 clear-cut chances to score if not for De Gea. Look out league, the Badgers aren’t here to make up the numbers!

Eastwood Record First Win. Eastwood Town produced a stoic defensive performance and managed to steal a goal on the break to take their first win. West Brom had all the chances in the game but in the end it was the Badgers well trained set-pieces that gave them the winner.

Eastwood Progress At The Expense Of Huddersfield. The travelling Badgers fans were treated a great performance by their side in the League Cup. Huddersfield went ahead early but a few substitutions at half-time meant Eastwood showed their class to go through to the next round.

League Cup Draw: Eastwood Town will be at home against Sunderland 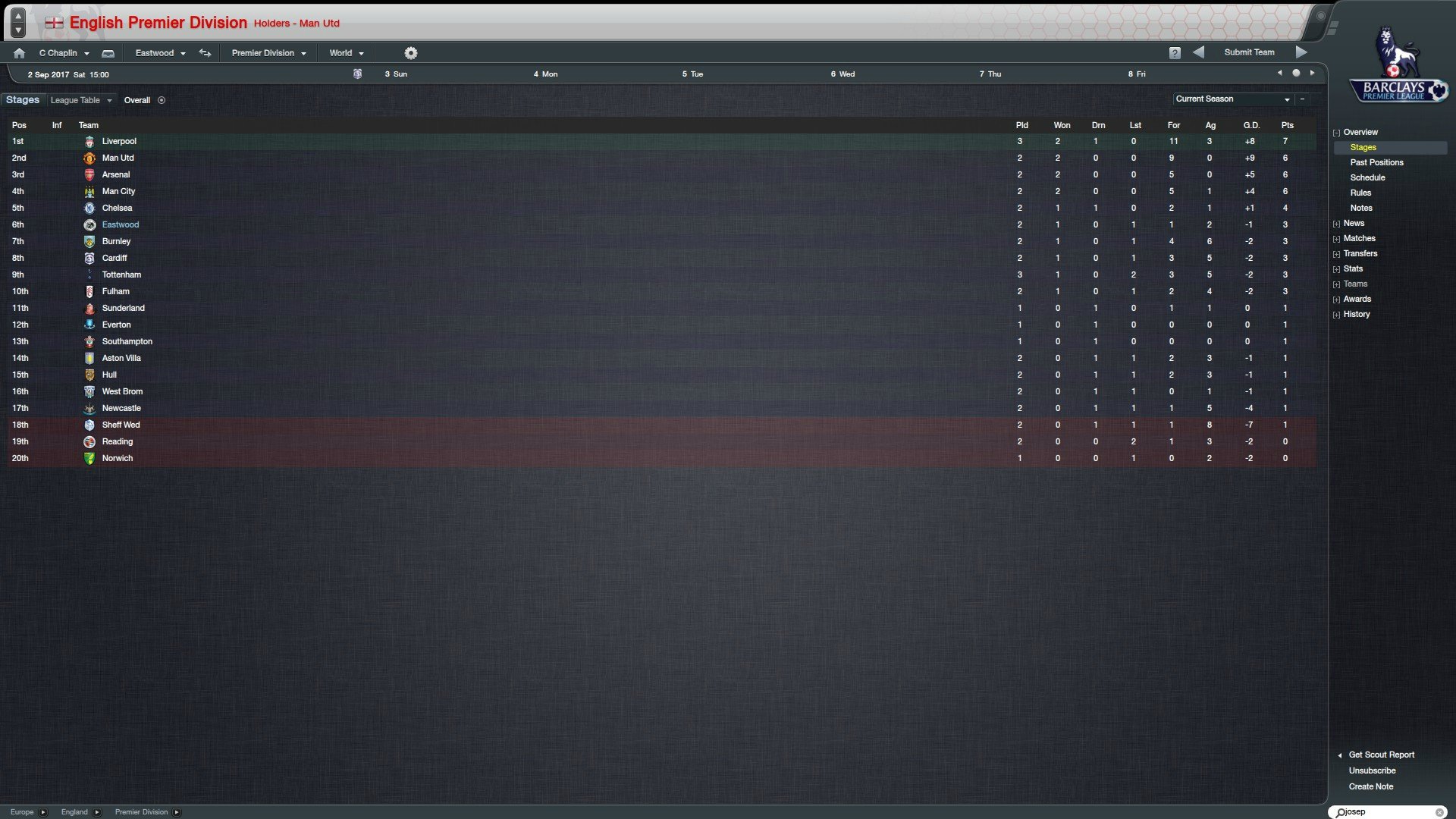 Doesn't tell you much after 2 games

League Cup: Third round - Vs Sunderland (H)
Login to Quote

Eastwood Town Hold Firm To Win. On a fine afternoon at Coronation Park, Eastwood Town entertained Cardiff and picked up their second successive league win. After a dull first-half, the game really burst into life with the Badgers picking up a victory.

Honours Even At The KC Stadium. Hull City hosted Eastwood Town in an early-season relegation six-pointer. Hull took the lead twice but the fighting spirit of the Badgers never gave up and they took a point.

Eastwood And Burley Share The Points. Two promoted teams battled it out at Coronation Park but the result was a bore draw, chances were at a premium but Burnley had the best of them.

Sunderland Edge Out Badgers. In a tight game at Coronation Park, the visitors from the North-east progressed in the cup. Kevin Doyle gave the Badgers a deserved lead but then went off injured as the pace of the Sunderland counter-attack made Eastwood pay. 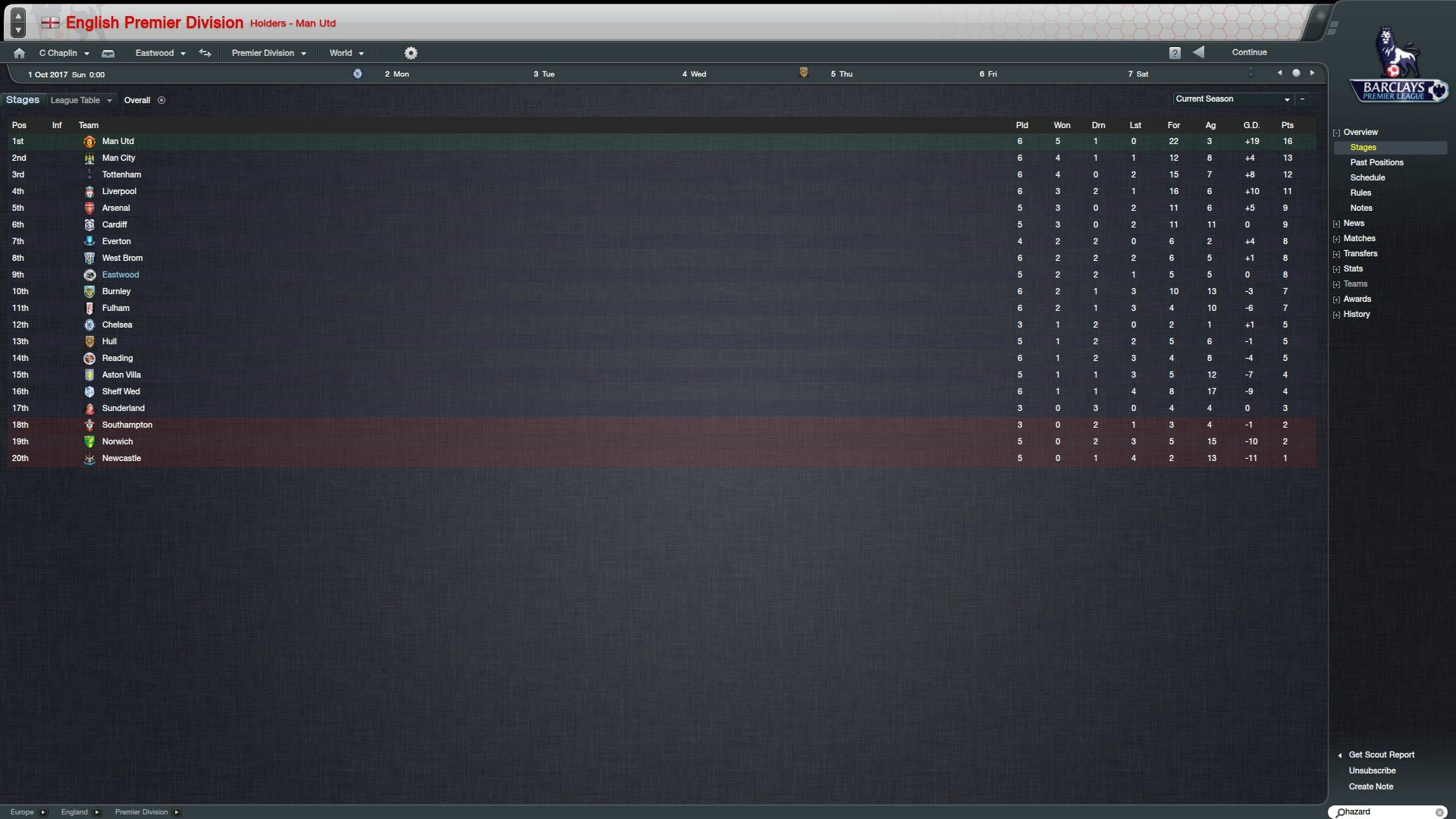 Eastwood Town have 8 points so far