So I didn't get off to a winning start at Fulham but I had 4 1st team members injured and 2 of my starting 11 suspended so it was a makeshift team to start with. A dissapointing loss away at Everton in the F.A cup which we didn't actually deserve to lose but it gives me the chance to focus my attention on the league now. How I didn't beat Norwich I will never know it was just one of those games I had 29 shots with 13 on target but nothing would go in I think I hit the woodwork on 4 seperate occasions. The game against West Ham started well with a Rodriguez debut goal however we couldn't hold on to a point and finally succumbed to defeat. We went 2-0 up against Everton and as the second half started I had a feeling we wouldn't hold on to the lead after the luck I was having at the end of my Tottenham reign and the beginning of this one it was always going to happen.

I held an emergency team meeting to ensure our heads didn't drop and all the squad reacted brilliantly. We've also been unlucky with injuries as I have 3-4 first team players injured and as one returns another gets injured so I'm yet to play a game with my first full 11. For example Schwarzer was injured and on his return he was injured the very next day I'm not having much luck tonight. And just after I typed this Bryan Ruiz was injured for 6 months this is unbelievable now.

I know this wasn't a great month but I will be planning on starting this properly as of next season I am using this half of the season to gain a feel for the club and get used to the players and staff.
Login to Quote

My 1st win as Fulham manager sees us beat Bolton and gain a massive 3 points. The home game against Wolves was my 100th game as a manager and it was a game to remember as we beat Wolves 3-0 getting another 3 points. A great point against Arsenal where we came from behind and Sidwell pulled a goal back at the death. Another great win against Aston Villa sees me take 10 points from a possible 12 this month and keeps me firmly in the top 10. It's also nice to see my signings doing so well especially with Rodriguez taking the step up from the Championship to the Premier League and scoring 4 goals in his first 6 games.
Login to Quote

swanny8589
10 years
unlucky with your tottenham career. but those draws seemed to be your undoing

i suggest not playing such a direct game of football. try and move the ball about.

one more suggestion . try using www.imgur.com to upload photos because your current ones are real stretched
Login to Quote

We may have lost 1-0 to league leaders Manchester City ending our unbeaten run but there were some positives as we had a number of chances but sadly couldn't convert. Also we managed to hold their squad of superstars at bay as we only lost to an early 7th minute penalty. A dissapointing loss to Newcastle but I hope to get 3 points against Reading in my next game. A huge 6-1 ended the month nicely with hat tricks for both Pogrebnyak and Rodriguez I'm delighted with Rodriguez he's been a revelation since I signed him in January that's now 7 goals in 9 appearances.
Login to Quote

mcfc1985
10 years
Yeh I have been using Imgur.com but I have being doing screenshots from FM12 and opening them with Paint before uploading them to Imgur.com that's the only way I could figure out how to do it that's why they may look stretched from when I used them in Paint.
Login to Quote

An easy 3-1 win away at Leeds started the month off nicely and gave me an opportunity to rest a couple of key players. My team didn't perform very well against Swansea which was a shame as we really should of got 3 points there. Wow a shock 3-1 away at Liverpool was a massive win for us a goal from Pogrebnyak and a brace from ex Liverpool player Coates sealed all 3 points. A nice win against Blackburn keeps us on course for a European spot. A loss to West Brom ended the month and next month will be tough with my final 3 games being against my ex team Tottenham followed by Chelsea and Manchester United.
Login to Quote

What a great victory over my ex club Tottenham that was truly pleasing for me seeing as they sacked me. After the defeat to Chelsea we are going to have to beat Manchester United if we are to have any chance of getting European football at Craven Cottage next season. I ended the season with a 1-1 draw against Manchester United and finishing 7th in the Premier League unfortunately there will be no European football next season due to cup winners.
Login to Quote 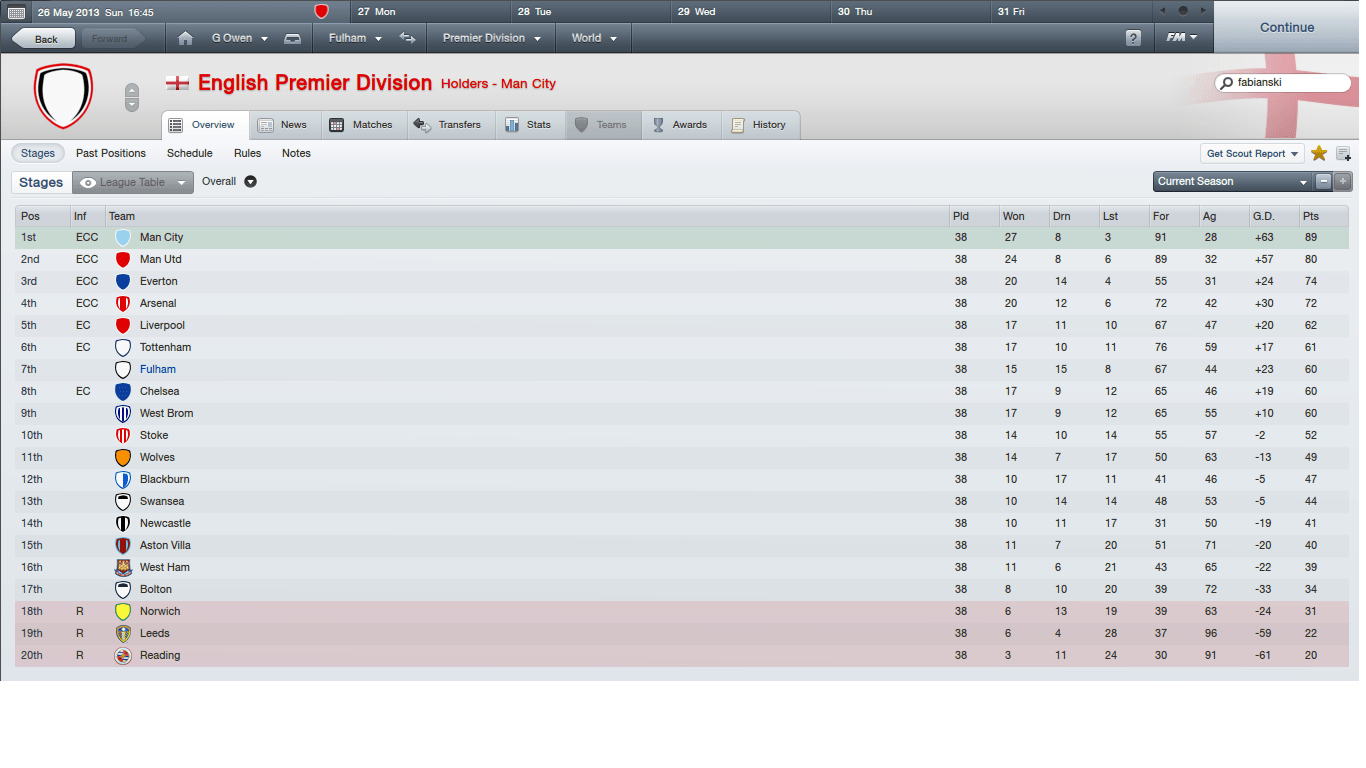 When I started this career you will know I set out to make Tottenham Hotspur a major force. That didn't quite go to plan and I was sacked just before the new year in my second season in charge (Whoops). I then got offered a few jobs before accepting the job at Fulham and I had a great ending to the season finishing 7th but narrowly missing out on European football for next season. I am looking forward to next season now and with the club being in financial trouble I don't really expect much funds to be made available so I am going to have to rely on the squad I currently have and maybe loan players depending on what funds do get made available.
Login to Quote

I told the board I think I am capable of getting the team into a Europa league spot and I was given only £1.5 million pounds to spend to try and achieve this. I will be looking to get rid of any dead wood now to try and free up funds to strengthen the squad. Below you will see the players I have sold and released and the players I have brought in to help me achieve my expectations.

Well that's pre season out of the way and regardless of the results I used these games to get my squad fully fit for the opening game against Swansea which I have achieved. I also played a lot of under 18 players and reserves in these games to see if they had anything to offer but sadly not.

Arsenal came in with an £8 million bid for Bryan Ruiz which I accepted as I had no funds I spent £3 million of it back to Arsenal buying Lukasz Fabianski.
Login to Quote

We start the season with a win over Swansea but the 2nd half of the game was very unnerving as Swansea started to dominate and had many chances. We were excellent defensively though and managed to hold on to all 3 points. A nice home win followed against Burnley where Pogrebnyak scored his 2nd goal of the season. A 2nd round defeat to QPR in the League cup but I'm not to downhearted I rested my first team for that game anyway. A nice end to the month with 3 PL wins from 3.

I was offered Steven Pienaar from Tottenham to loan for the season and I accepted with the departure of Bryan Ruiz to Arsenal Pienaar will be handy to have as back up as he can play in any position in midfield. There will be no more transfers from me in or out now until January at least but we will see what's what then.
Login to Quote

September started with a draw at Home to Stoke followed by a nice 2-0 away win at Aston Villa. Then came the tough home game against Liverpool which I was winning 1-0 right up until the 93rd minute when Suarez equalised. I am currently in 2nd place in the Premier league and still undefeated in my opening 6 games with 4 wins and 2 draws scoring 8 goals and conceding only 2.
Login to Quote

Another short month started with an away trip to my ex club Tottenham where we succumbed to our first defeat of the season losing 2-0. A home draw against Wolves in a game we really should of won I will be doing everything I can to gain 3 points in my next game at home to Blackburn. A shocking end to the month with a defeat to Blackburn and not 1 single goal scored in 3 games we've gone from 2nd to 7th.
Login to Quote

mcfc1985
10 years
We are now in a good financial position somehow and the board have just given me £8,25 million to spend so that has helped me to offer contracts to a few members of my team who were due to expire at the end of the season like Hangeland , Sidwell and Pogrebnyak. I am also using £5.5 million of it to try and sign transfer listed Arsenal wonderkid Alex Oxlade-Chamberlain.
Login to Quote

You are reading "Making Tottenham Hotspur more than just a top 4 team".