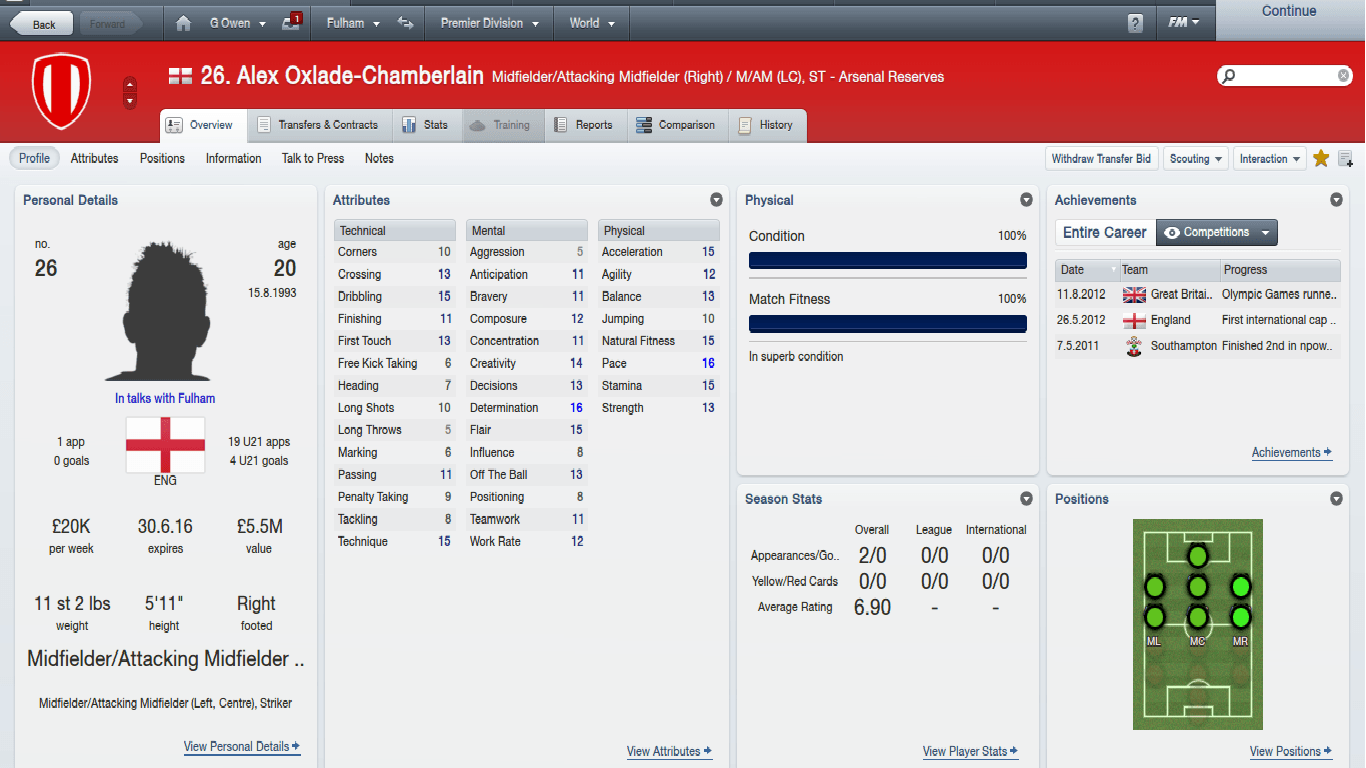 I am very excited about this transfer as he is still a wonderkid and only 20 years old he also has terrific pace so I will be exploiting that.
Login to Quote

I wasn't expecting to get a result against Manchester City but it is getting slightly worrying that I still haven't scored a goal in 4 games now. I decided to hold a team meeting prior to the Birmingham game and it went well the whole team reacted well. Finally a goal and a win against Birmingham the team meeting seemed to of done the trick hopefully Rodriguez will start to find some form again. A nice win against Newcastle and another goal for Rodriguez. A great end to November with a 3-1 home win over West Ham sees us go into December in 4th place in the league.
Login to Quote

Not the best start to the month and things are looking like they could go from bad to worse with games against Arsenal , Chelsea and Manchester United. After the defeat to Everton came the FA cup 3rd round draw where we were drawn away to Northampton. Another 92nd minute goal conceded robs us of all 3 points against Arsenal. A 4-5 week injury for Rodriguez means I will have to recall Meteb to the side. A terrible loss at home to Bolton we really should of won that game and I don't have much hope for the next 2 roll on January. A 2-0 defeat to Chelsea where Pogrebnyak was injured for 5-6 weeks that's both of my 1st team strikers unavailable for over a month. Another defeat sees us end the year in 11th position.
Login to Quote

We've had a bit of an up and down season we started well but things have started to decline towards the end of the year. I will now be looking to push on towards a Europa league spot. I am delighted with my transfers 2 of them are current England internationals and have bags of potential and Bojinov will help boost my strike force as we're one of the lowest scorers in the league.

gizzydrop
10 years
oxlade-chamberlain and welbeck in? sounds like great business to me...keep up the good work
1
Login to Quote

A nice start to the year with a home win over Swansea and it was good to see Oxlade-Chamberlain grab a debut goal for the club. A 1-0 win over Northampton with my 2nd team sees us into the 4th round. A last minute goal by Gouffran earns us a point in a game we dominated and should of won. A last minute goal by Bojinov secured all 3 points after leading 2-0 we conceded 2 sloppy 2nd half goals. A dissapointing loss to end the month and my job here at Fulham hangs in the balance and is insecure.
Login to Quote

mcfc1985
10 years
As it stands as I enter February my job as manager of Fulham is currently insecure and with some tough fixtures coming up I may well lose my job but I am favourite to replace Kenny Dalglish at Liverpool. If I am sacked I will be staying in the game and seeing what jobs become available I set out to overtake Sir Alex Ferguson in the hall of fame and I wanted to do it with Tottenham but now that isn't going to be possible I will do it whatever way I can and it looks like it will be with numerous clubs. I will give it one more shot in the Premier League if I am sacked and see how I get on before loading up some other nations and leagues and maybe trying another nation and league.
Login to Quote

Well 2 back to back defeats against Liverpool eliminated me from the FA cup and kept me in the bottom half of the table. Just before the Aston Villa game I was told I needed a win to keep my job and I lost but I wasn't sacked. Up next is Tottenham I don't think I have much time left and I can't see me being manager of Fulham for much longer and the board refuse to give me more time. A draw against my old club Tottenham ensures I keep my job going into March.
Login to Quote

Two draws and a loss to kick off March and yet I still keep hold of my job. With just 9 games to go I don't think it will be long before the board inevitably sack me. I have asked them twice in the last 6 weeks to overlook this season and give me more time but both were rejected. Everton sack Chris Houghton and I am asked for my opinion on the subject I denied any interest which pleased the board . A huge win against Birmingham and about time to it was nice to see Bojinov and Welbeck on the score sheet. Everton approached me to become their manage I rejected their offer and I hope the board will see this and give me another chance. A great win against Newcastle sees me climb from 11th to 9th I don't know where these goals have come from we've been on fire in the last 2 games also morale is high so I'm hoping with just 7 games to go I can hold onto my job and finish in the top 10.
Login to Quote

April started with a defeat against West Ham but the board have now agreed to give me more time. Another defeat this time to Everton sees me slip down to 10th. A draw v West Brom keeps me in 10th next up Arsenal. Another defeat and with just 3 games to go I hope I can keep hold of my job to rebuild next season.
Login to Quote

FMRegen27
10 years
Tough Month ! And you know what they say " There's always next year" TM to liverpool fans

A draw away at Bolton and I really need to get through these last 2 games and hopefully hold onto my job. A HUGE win against Chelsea should surely ensure I keep my job at Fulham for next season? 1 game to go. The season ends in defeat After a 4-1 loss to Manchester United.
Login to Quote 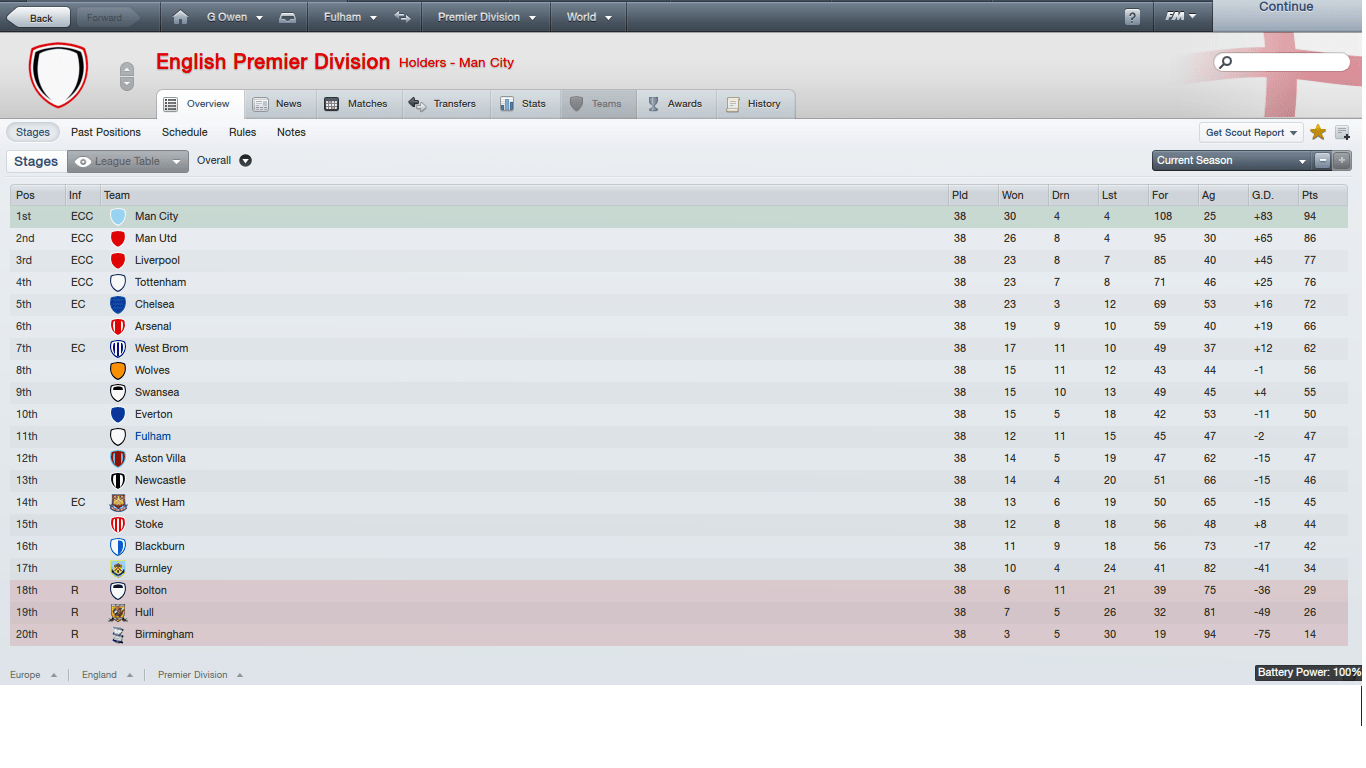 I was sacked from Fulham and I will now be on the lookout for a new club before the season kicks off.
Login to Quote

I have applied for all 4 of these and would be willing to accept any I just hope one of these clubs offer me the chance to carry on my adventure and achieve what I set out to do from the start BE NUMBER ONE. Swansea offer me a contract which I chose to delay for a week as Liverpool are 'Flattered' by my interest. Wolves have also offered me a contract which I have chosen to delay if nothing happens in the next week I will have a huge choice to make 9th placed Swansea or 8th placed Wolves.
Login to Quote 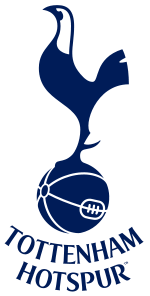 Owen back as manager of Tottenham Hotspur Football Club


Would you believe it!!! Tottenham sack Alex Mcleish and offer me the job this means my story can continue with the team I set out with at the start. Never have I been offered the chance to return to a former club until now.
Login to Quote

You are reading "Making Tottenham Hotspur more than just a top 4 team".