crisrko
8 years
Darral Northwood, 25 year old is an old internation USA football player that is curently living in Romania. He joined up the staff-side of the game, becoming Steaua Bucharest's new manager. 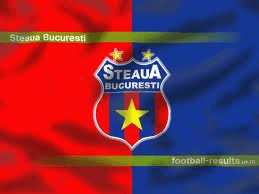 SB's background is a glorious one, having previously won the European Champs league. 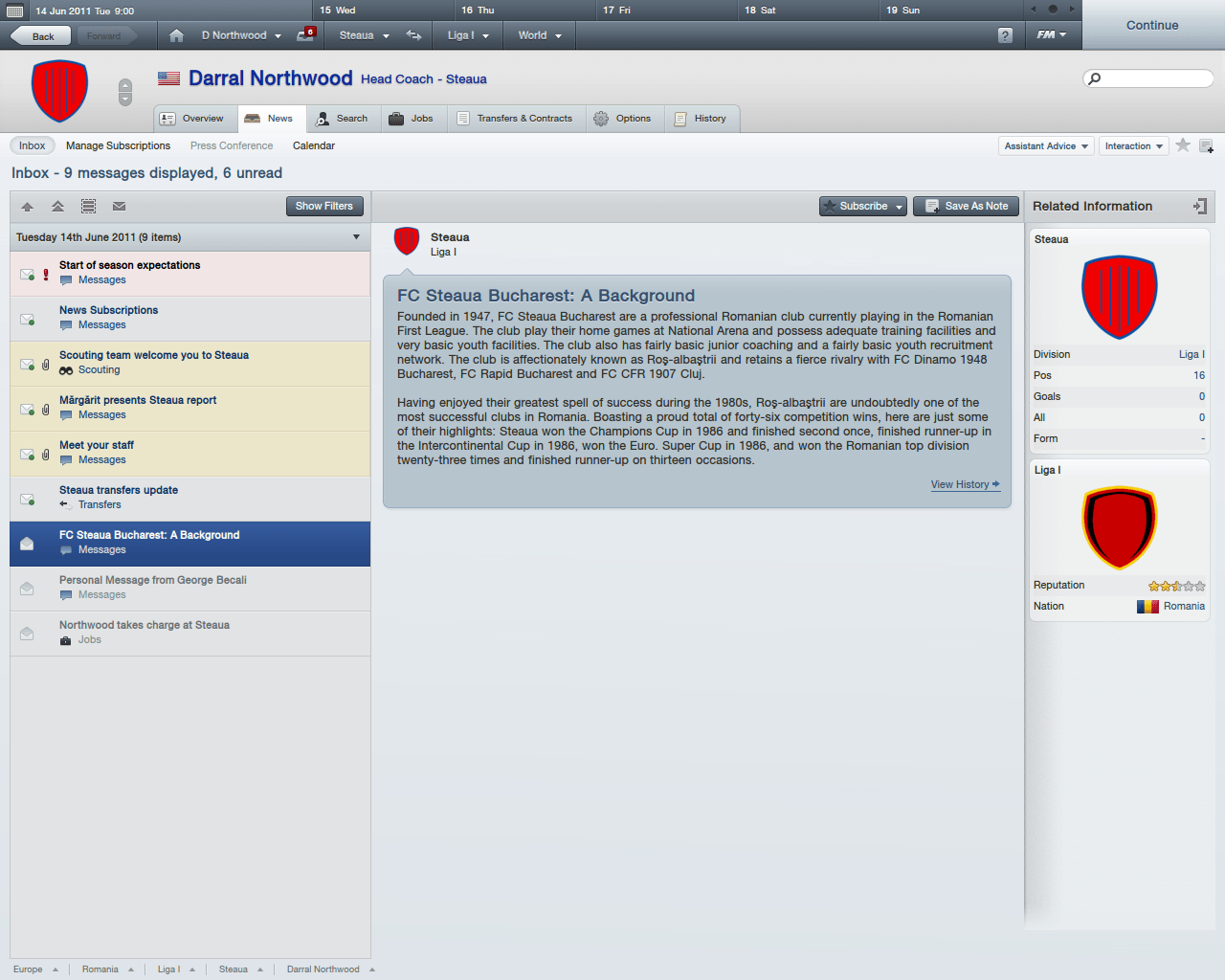 Youth facilities have just been upgraded and the owner is planning on finding a parent club.
Login to Quote 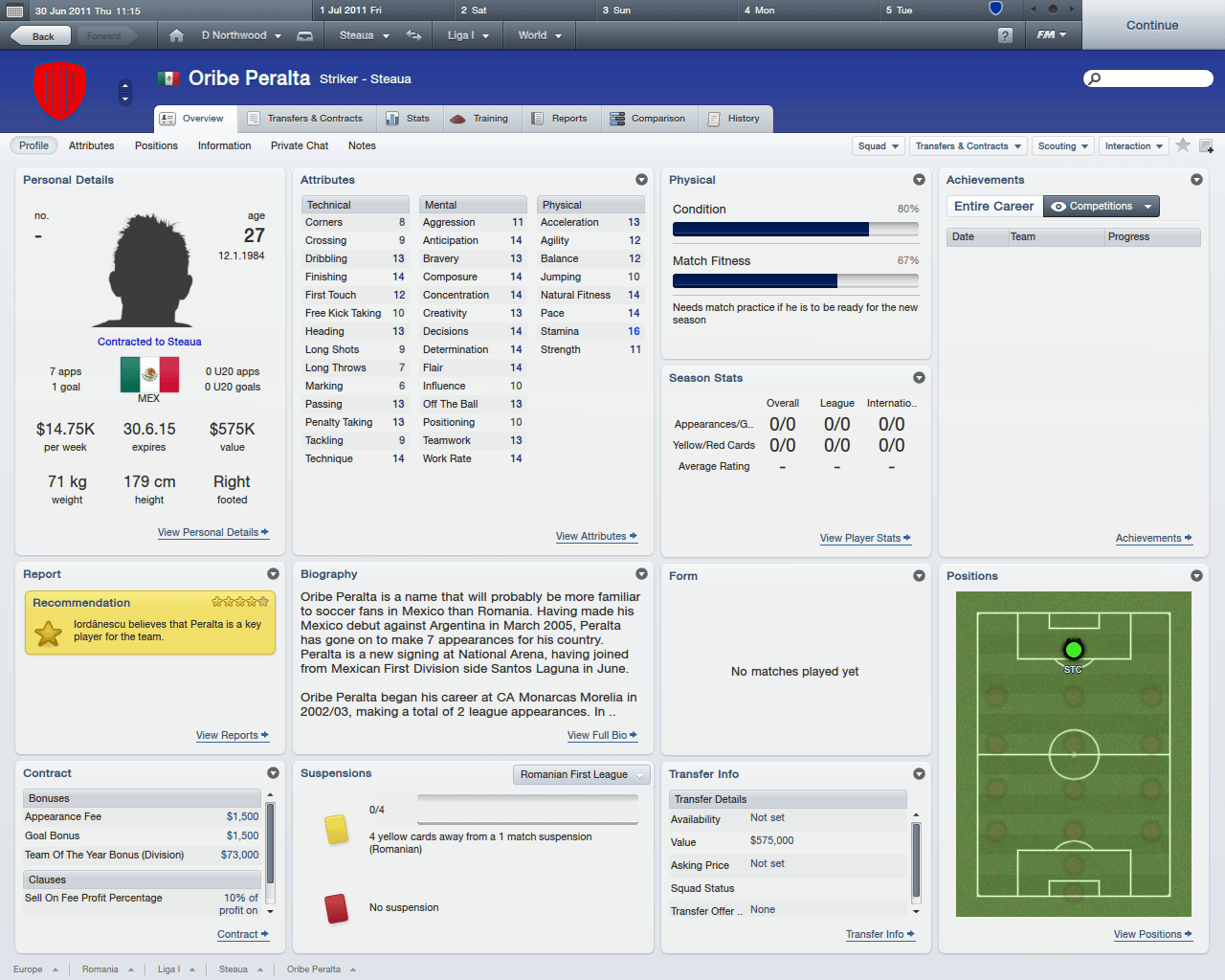 its me
8 years
there isnt really much to comment on ??
Login to Quote

crisrko
8 years
The pre-seasons have ended, winning all the matches with decent scores, but loosing the Supercup 3-0 on Penalties against Otelul. 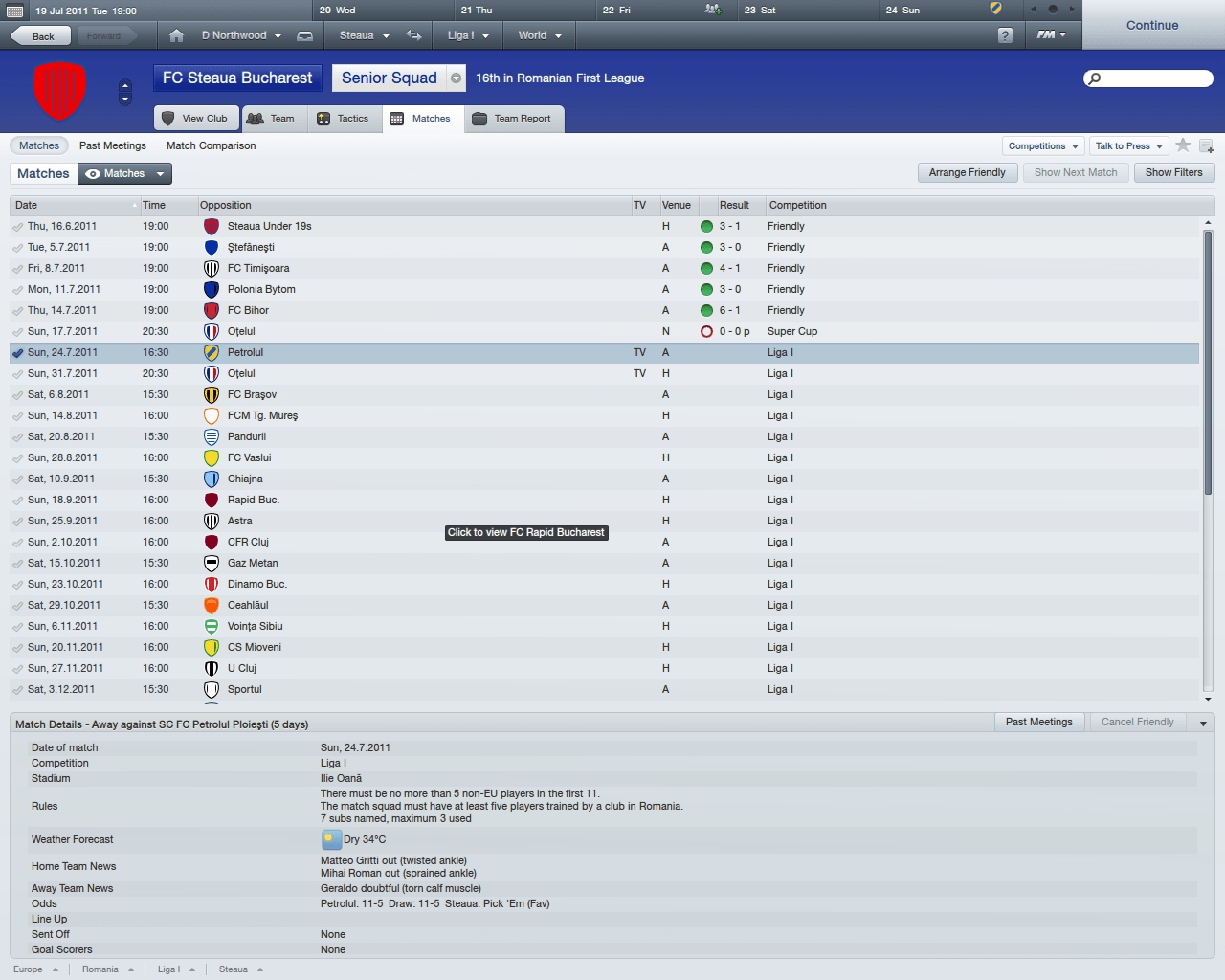 George Ogararu, Steaua veteran has returned to the club as a high earner, and also captain. 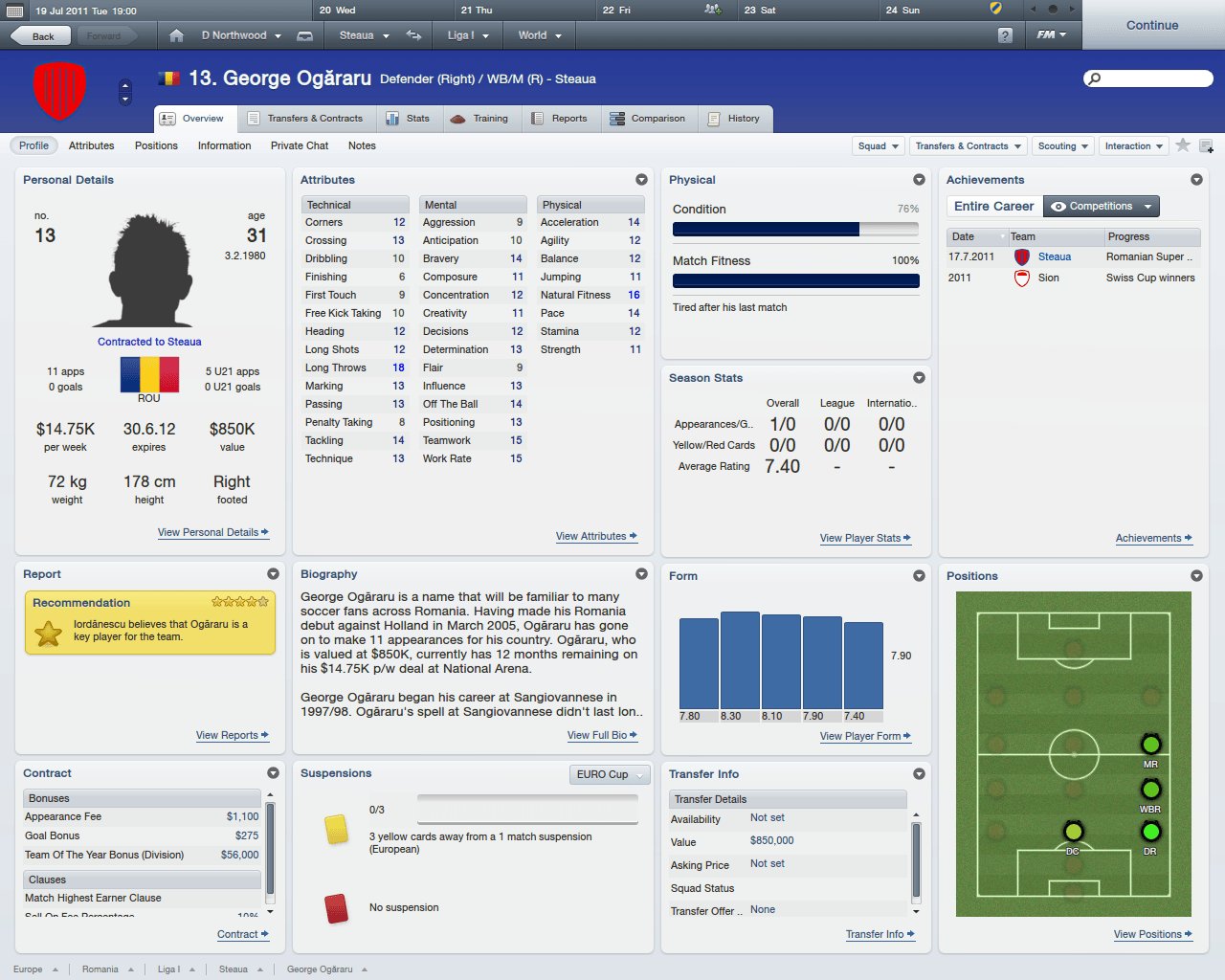 Training facilities are rather awful, with certain domains being decent although. 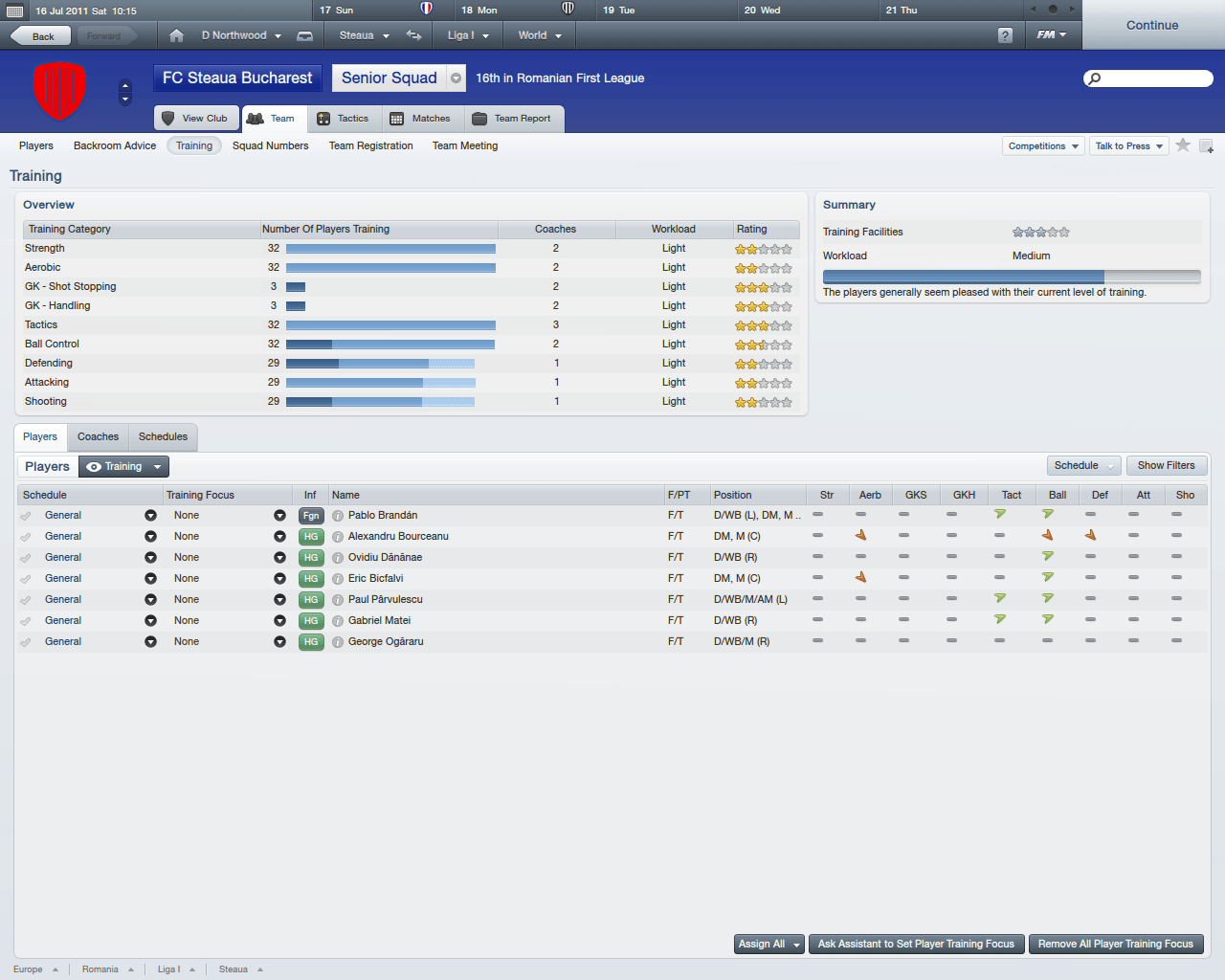 crisrko
8 years
SHOCKING goal from Raul Rusescu against Petrolul in Northwood's debut as a manager. Incredible goal that noone would ever think of. 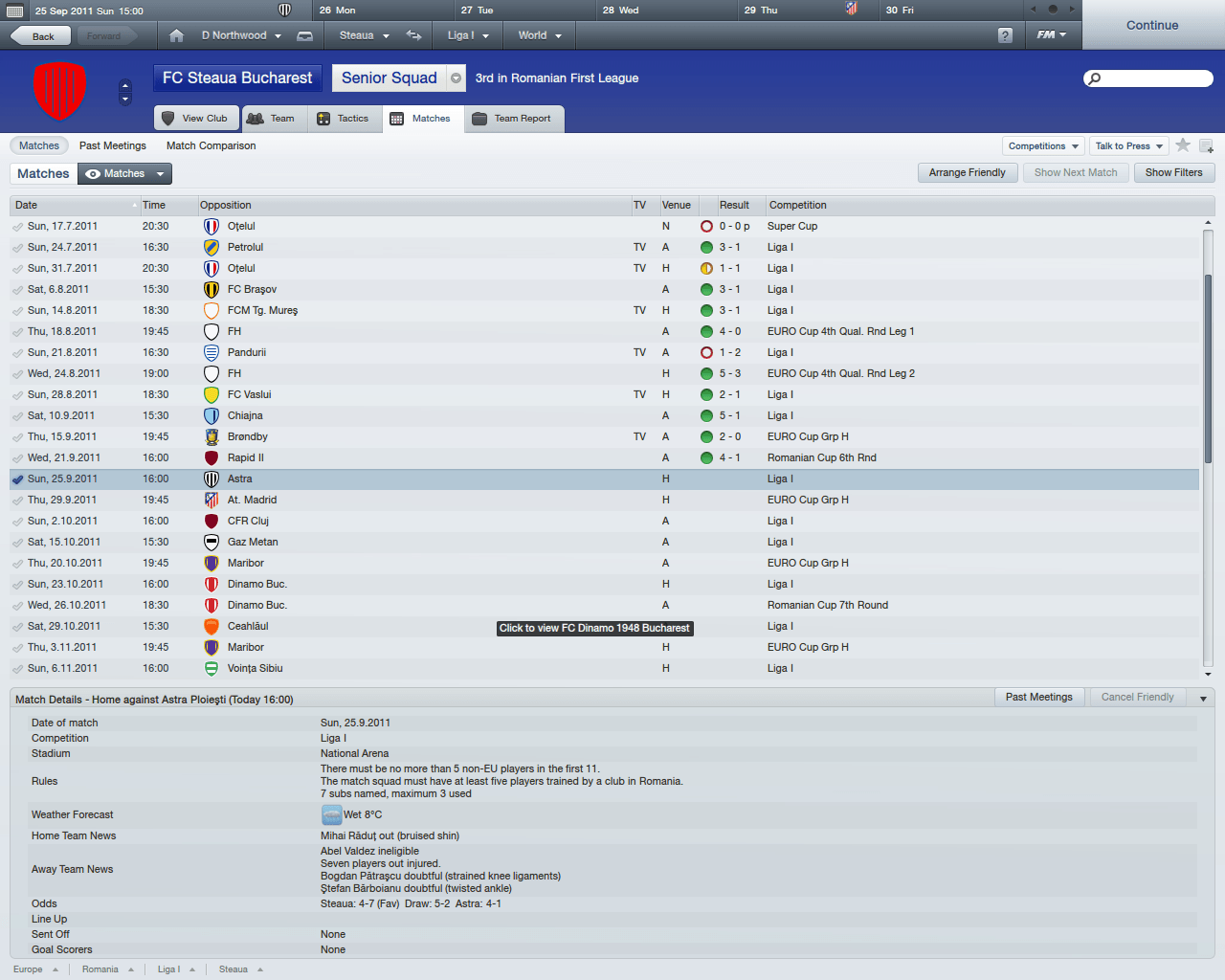 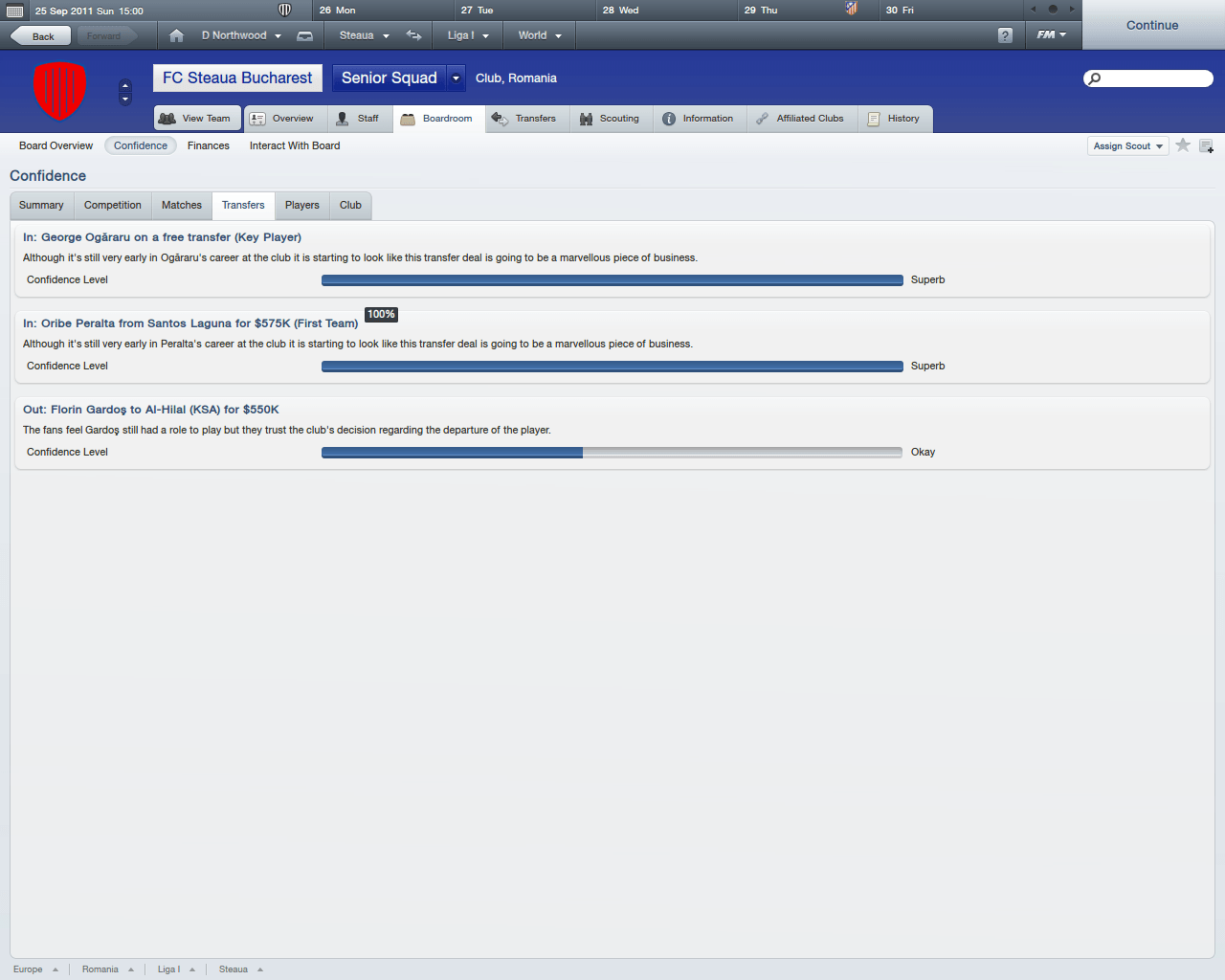 Gurdit
8 years
Great form your team is in.

One suggestion I would give is to read others' stories here and pick up on how they are presenting their stories.
Login to Quote

crisrko
8 years
Curently in the UEFA group, Steaua is second with seven points out of seven matches. Atletico Madrid is first with nine points, while Brondby and Maribo are trailing behind the two. Close call for Steaua in the next two matches, where they have to win ATLEAST one of them. 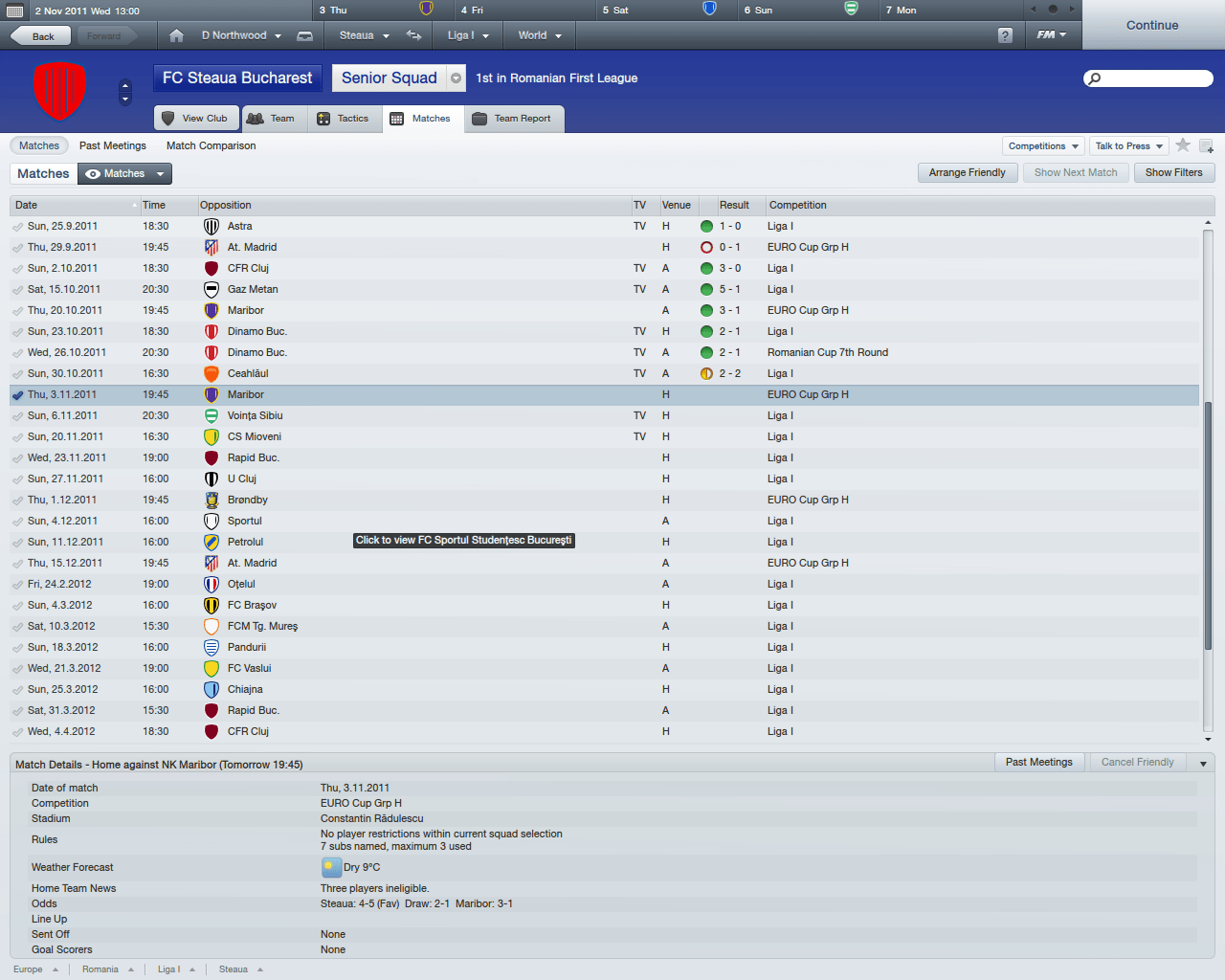 Oribe Peralta has been phenomenal for the price he has been bought for, banging 11 goals in 11 appearances for Steaua Bucharest. 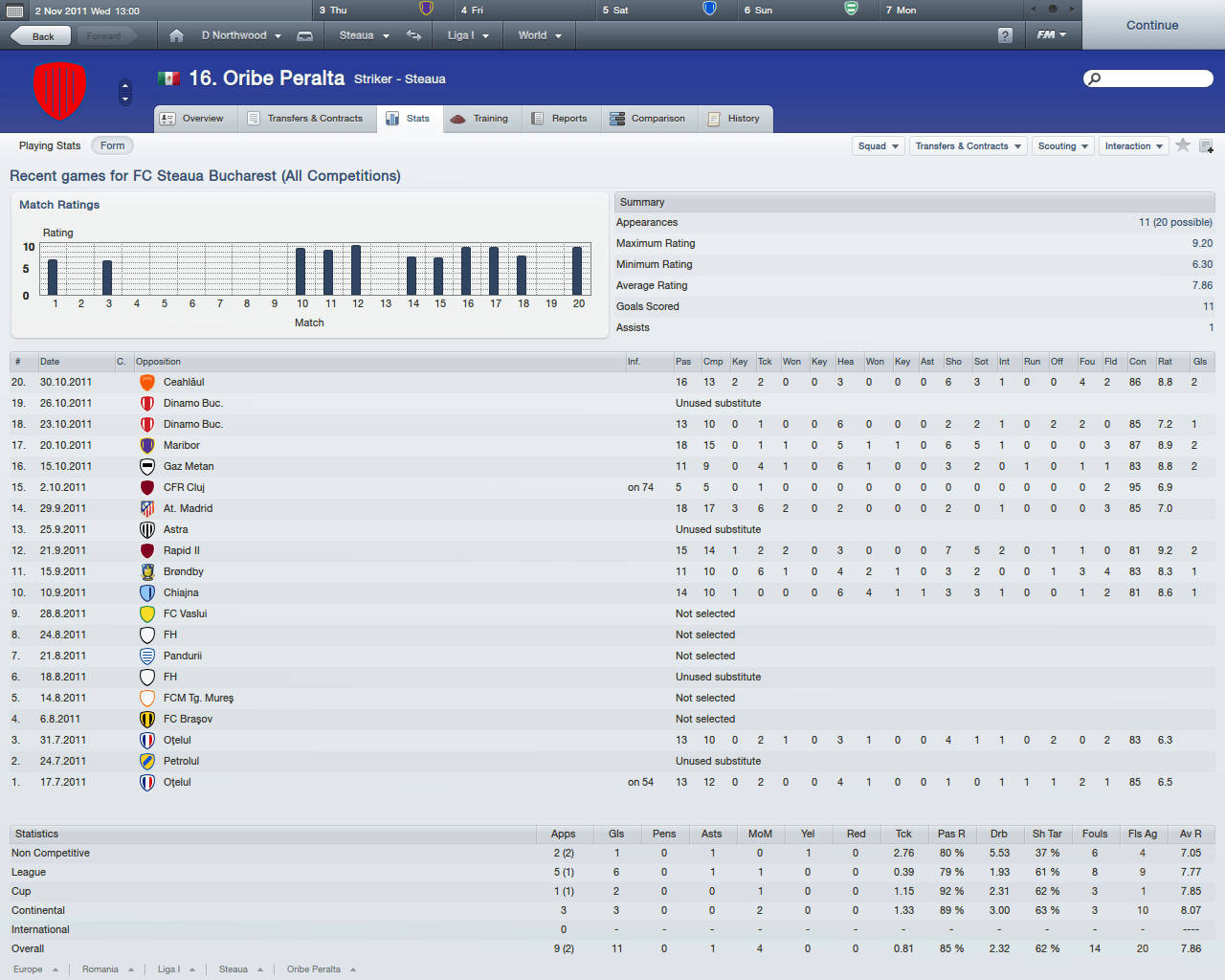 Akash
8 years
When I saw you sign Oribe Peralta, I thought to myself, 'This guy is going to be a beast in this league'..and it is great to see he is actually doing incredibly.
A suggestion: You might want to present your matches a little differently.. It is difficult getting emotionally invested in the story if we don't get to see details about matches and stuff.
Login to Quote

crisrko
8 years
Steaua leave Vointa Sibiu behind, defeating them in a 2-0 match, with Chipciu scoring in the 9th minute with a scorcher from a freekick, and Nastasie, the very promising AMR finishing the game. Also, a new player.


N'Doye has debuted today, being a new GK in the SBFC squad. 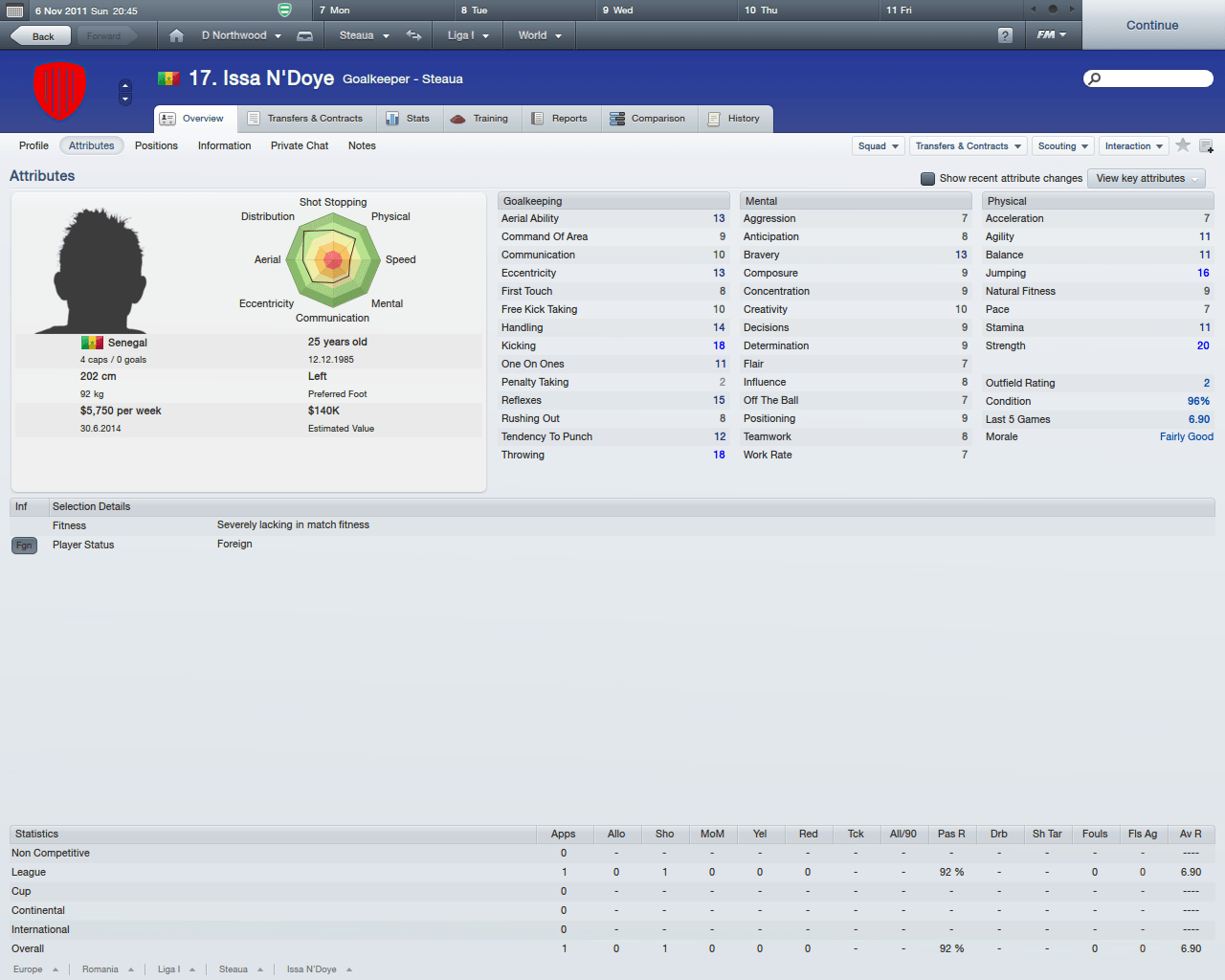 Steaua decimate CS Mioveni 5-3 by dominating the match completely. Mioveni thought it was Christimas, gifting Steaua's side three own-goals, two provided by Nastasie, the Mioveni defender.
Peralta does the double, getting the man of the match award, and scoring two goals for Steaua.

crisrko
8 years
Steaua have done it! They managed to leave the Euro Groups alive! They will now face OB in the 2nd round of the contest.

The league is curently lead by Steaua, as we prepare to enter the February month. 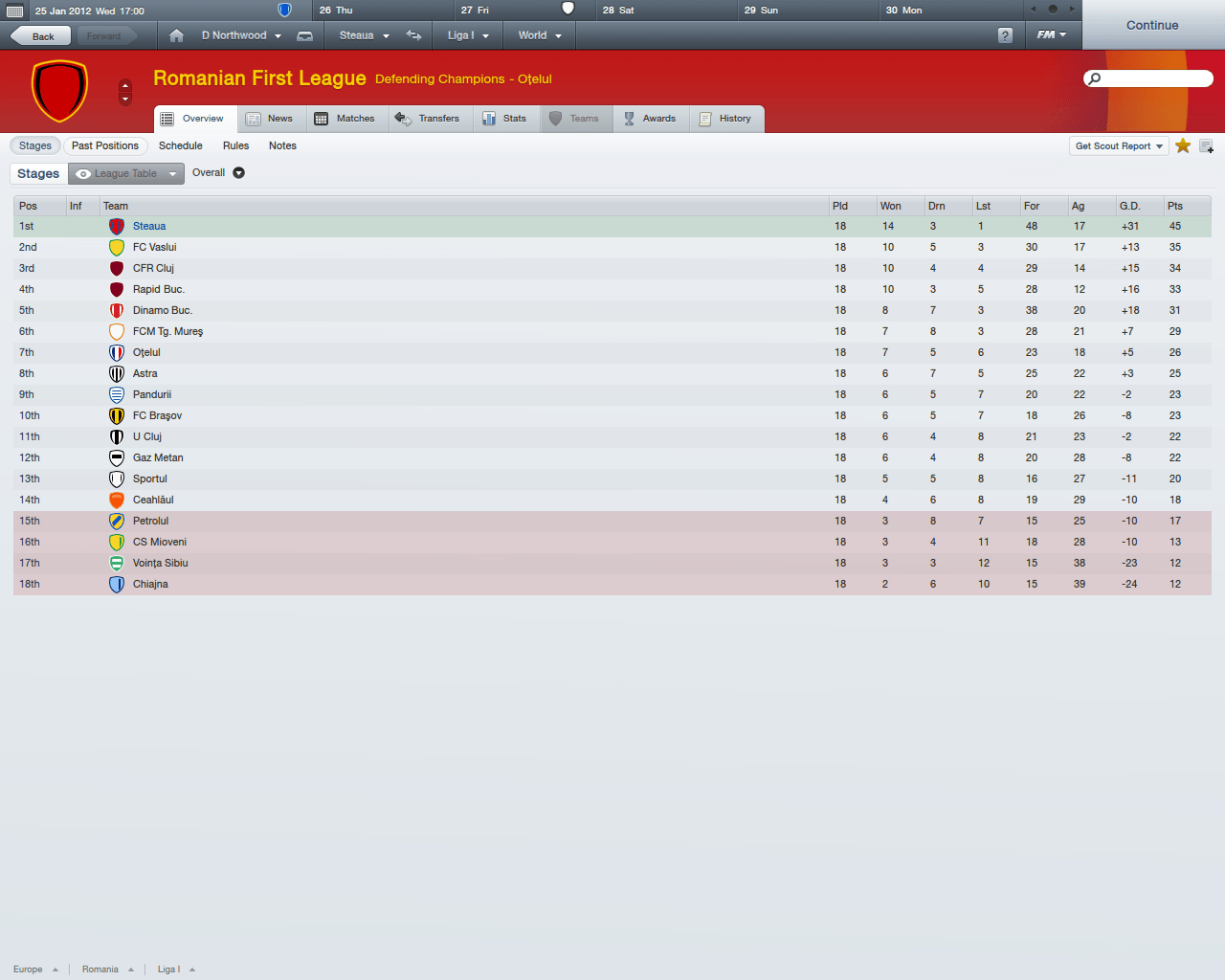 Oribe Peralta has been doing fabulously, scoring 10 goals in the league, and growing his value up to 1.5 milions. 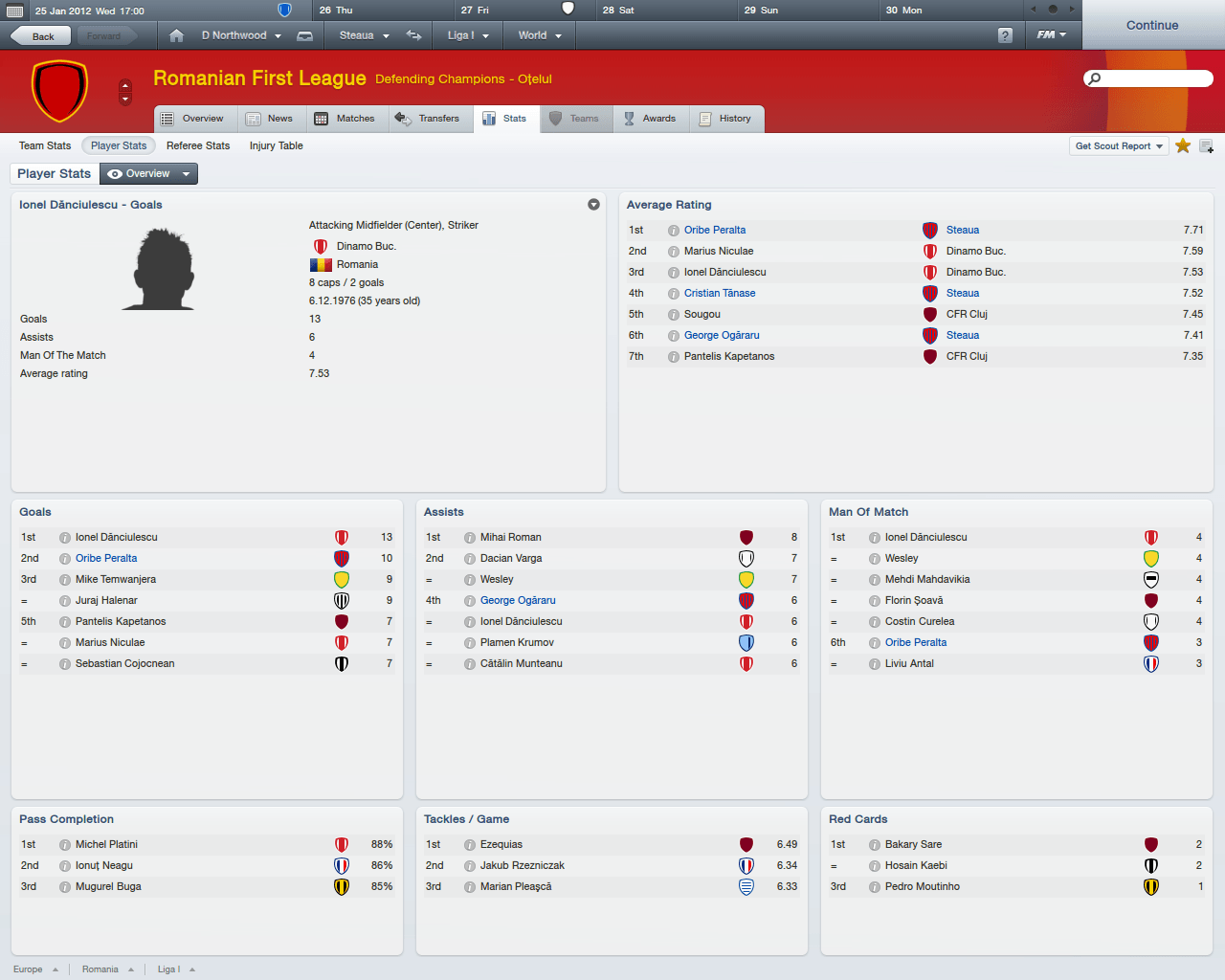 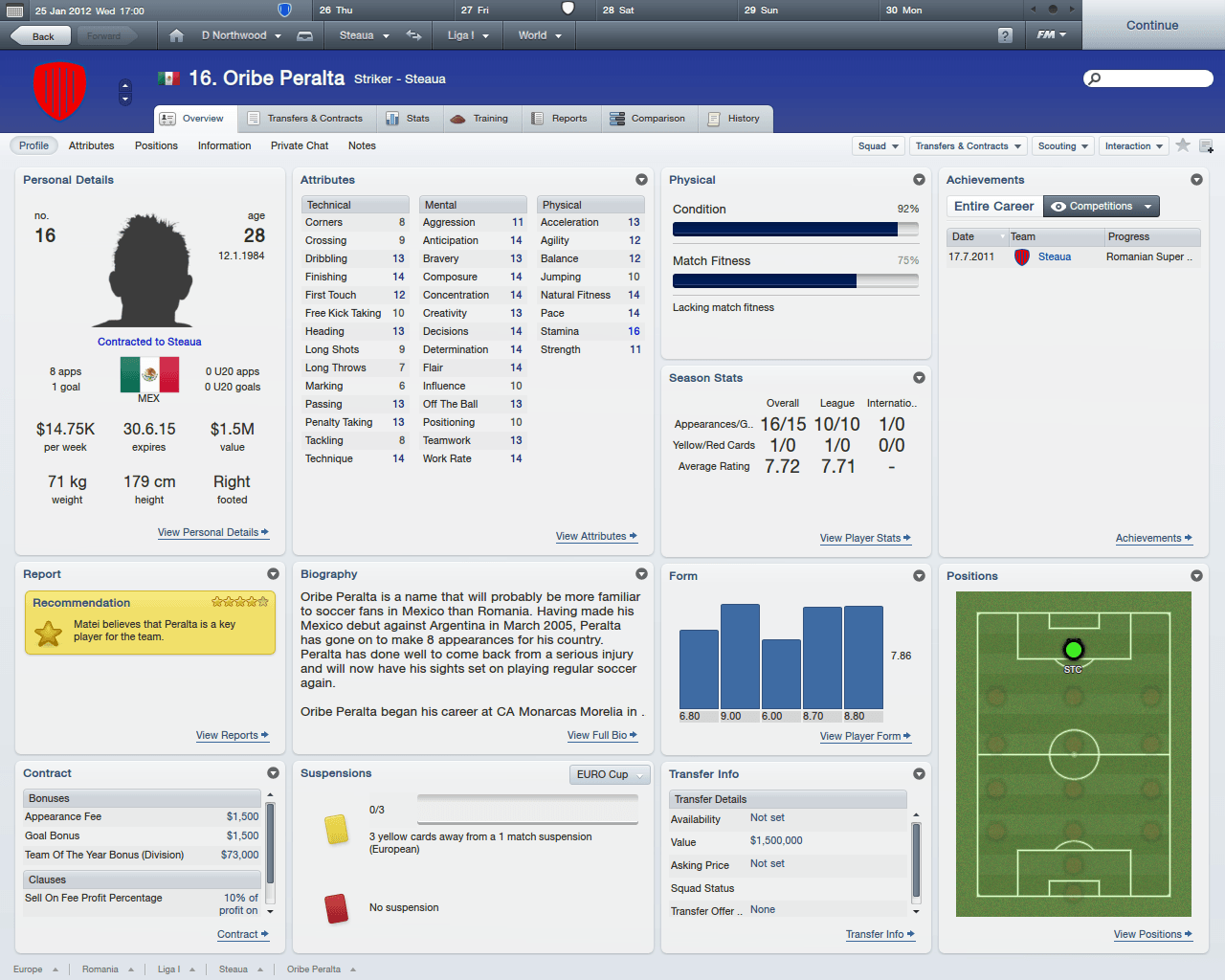 Due to the very open program in Romania,Steaua has prepared several friendly matches against CS Otopeni, G. Bistrita and Alro, before facing OB in the Europa League. Gotta shake the rust of! Oribe Peralta has returned from his 7 weeks injury, banging 2 goals in the first match after the injury. Thats my boy!
Login to Quote

crisrko
8 years
The derby against OB in Europa League is approaching fastly, as Northwood prepares several transfers. Wallyson and Ninkovic arrive to the club, Wallyson joining from Cruzeiro for 1.3 Mil, and Ninkovic joining on a loan.

Markovic. a youngster from partizan is suspected to join Steaua's side in July, completing the rout. Are there any more transfers going to take part? We shall see! 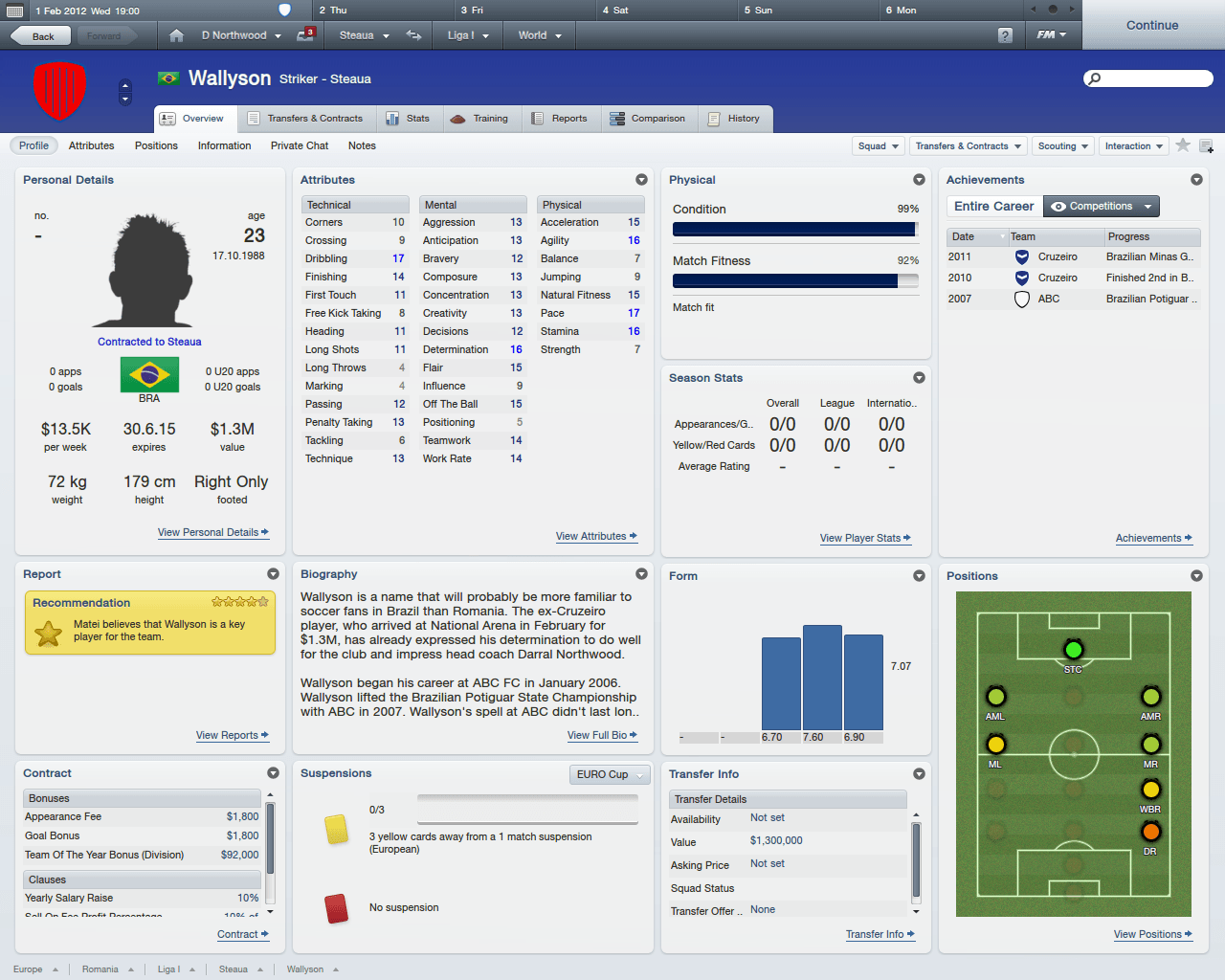 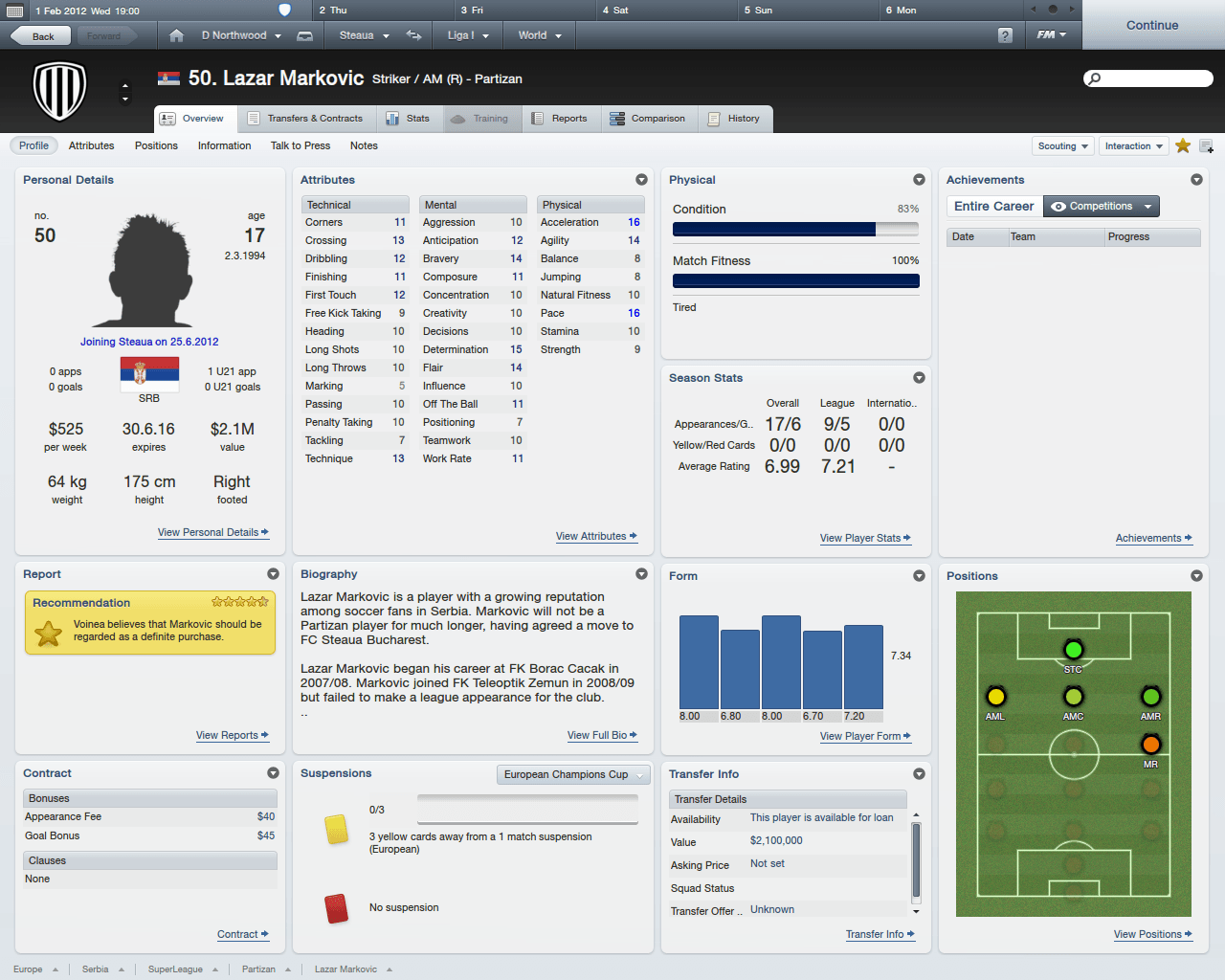 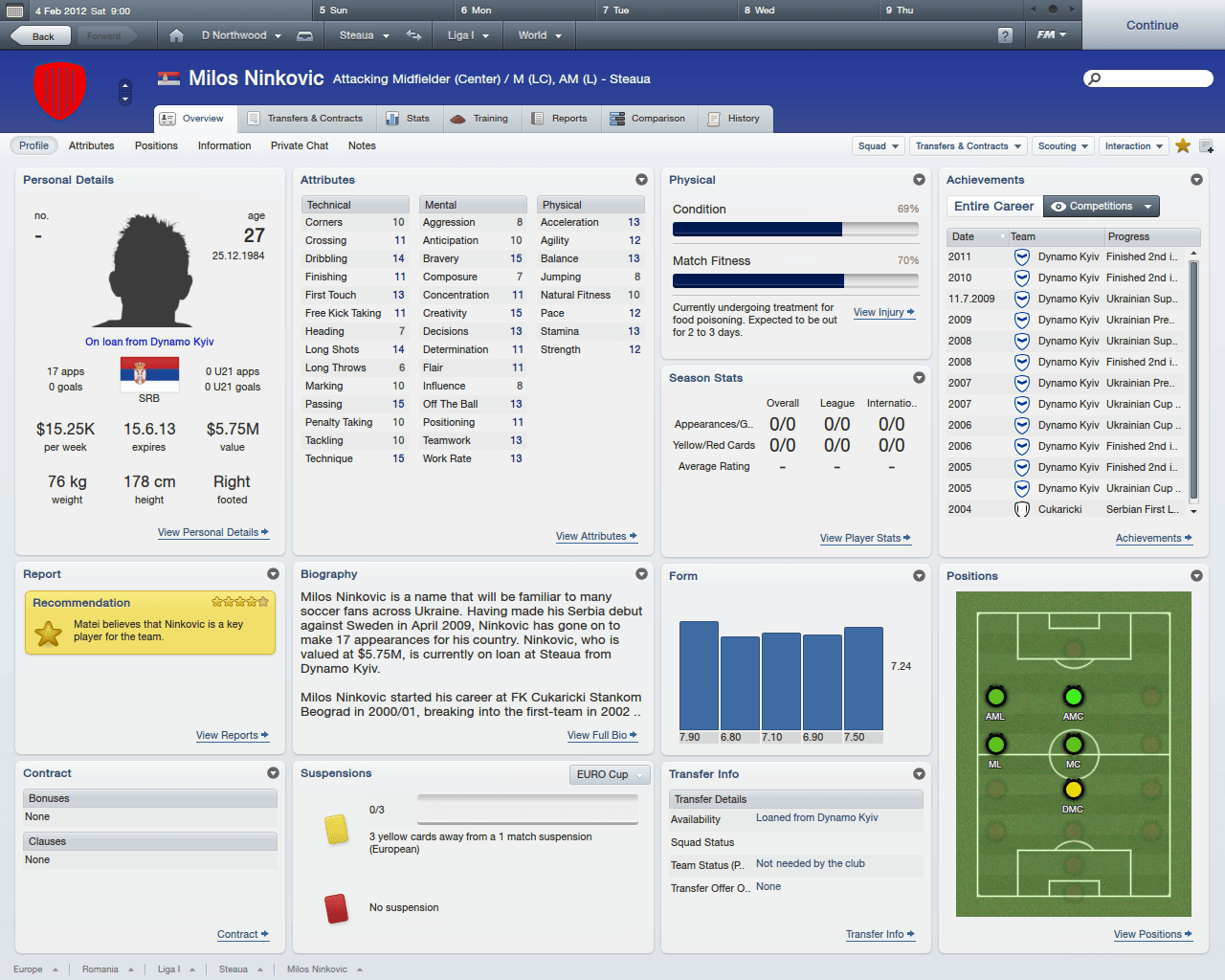 Also nice to see someone do a story a way from the usual English/Top European teams. Keep it up mate, nice one.
Login to Quote

crisrko
8 years
Steaua have been incredible! The team is curently in Euro Cup semi finals, preparing for the second encounter against Lille, having won the first one 2-1 AWAY. The Steaua Bucharest fans and financer are in the nineth heaven thanks to Darral. Steaua is also on course to win the season, having played 26 out of 34 matches. The difference between the first and second place is of 13 points! Steaua can't be reached! They must do it!

They have made it so far... defeating OB, Dynamo Kiev and PSV on their way for the Euro Cup! Can they do it? Can they get ATLEAST a draw against Lille? We will find out soon. 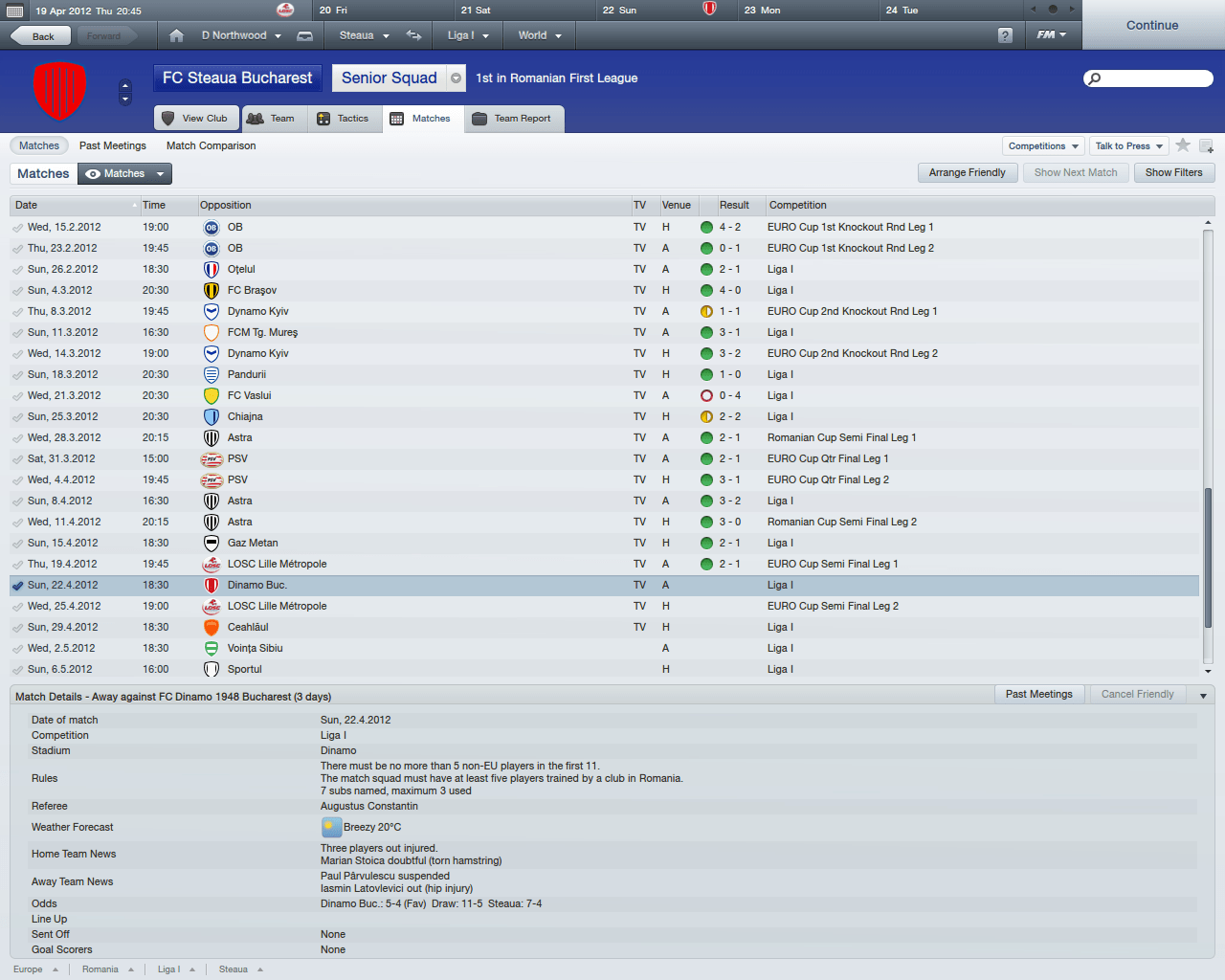 Chipciu's goal is great, here you have a link of his Freekick against Lille. Breathtaking!

Atreidas
8 years
Yeah mate, you get alot of goals like that when you got someone with 15 in FK and LS.
Login to Quote