crisrko
8 years
Steaua has done it! They are through in the final after defeating Lille 3-1! Goals from Tanase, Wallyson, and an own goal from one of Lille's players have granted them the entry in the final, after dozens of years. Unfortunately for the romanian team, they will have to face either ManCity or SLB.
Great goal from Wallyson to secure the victory.

crisrko
8 years
Its confirmed, Steaua will have to face ManCity in the final.
Login to Quote

crisrko
8 years
Its over, Steaua defeated in the 73rd minute by a lucky tap-in from a largely wasteful Aguero. Applauds and tears have been spilled today, Steaua defying all the odds and proving everything against the odds, holding ManCity to a lucky 2-1 win. Wallyson had the goal of the match, from a phenomenal Cristian Tanase like pass, silencing the stands.

After the match, Northwood was asked in a interview what does he feel after this defeat, after they had a agonizingly close fight with ManCity, even though they were expected to loose by a huge margin.
"Everyone associated with the team is, or should be proud of what we accomplished, we made it all the way to the final, and left with a bang. Football in Romania is not dead, and I am aiming for what happened in 1987, winning the Champs League", said the manager passionately.

Other than that, Steaua has qualified for Champions Cup next season, finishing first in the Romanian League. This isn't the last time we hear about this team, as experts are enthusiasted to see Steaua and their head coach perform in the new environment.

Steaua is expecting young striker from Partizan to arrive soon enough, while Northwood prepares his budget to extend Peralta's and Wallyson's contract after some incredible performances in the league and in Euro Cup, sealing the club a new reputation, "Odd Defiers".

Gurdit
8 years
Nice run, mate. All the best for the next season!
Login to Quote

Henna96
8 years
Great job, mate! Not everyone can lead Steaua to a Europa League final. Good luck next season!

crisrko
8 years
Second season as Steaua manager brings new hopes. The success in Euro Cup and the qualification in third round for Champions League has got Steaua alot of interest from players, as they complete several deals to strenghten the squad. They are also looking to kick out the deadwood. 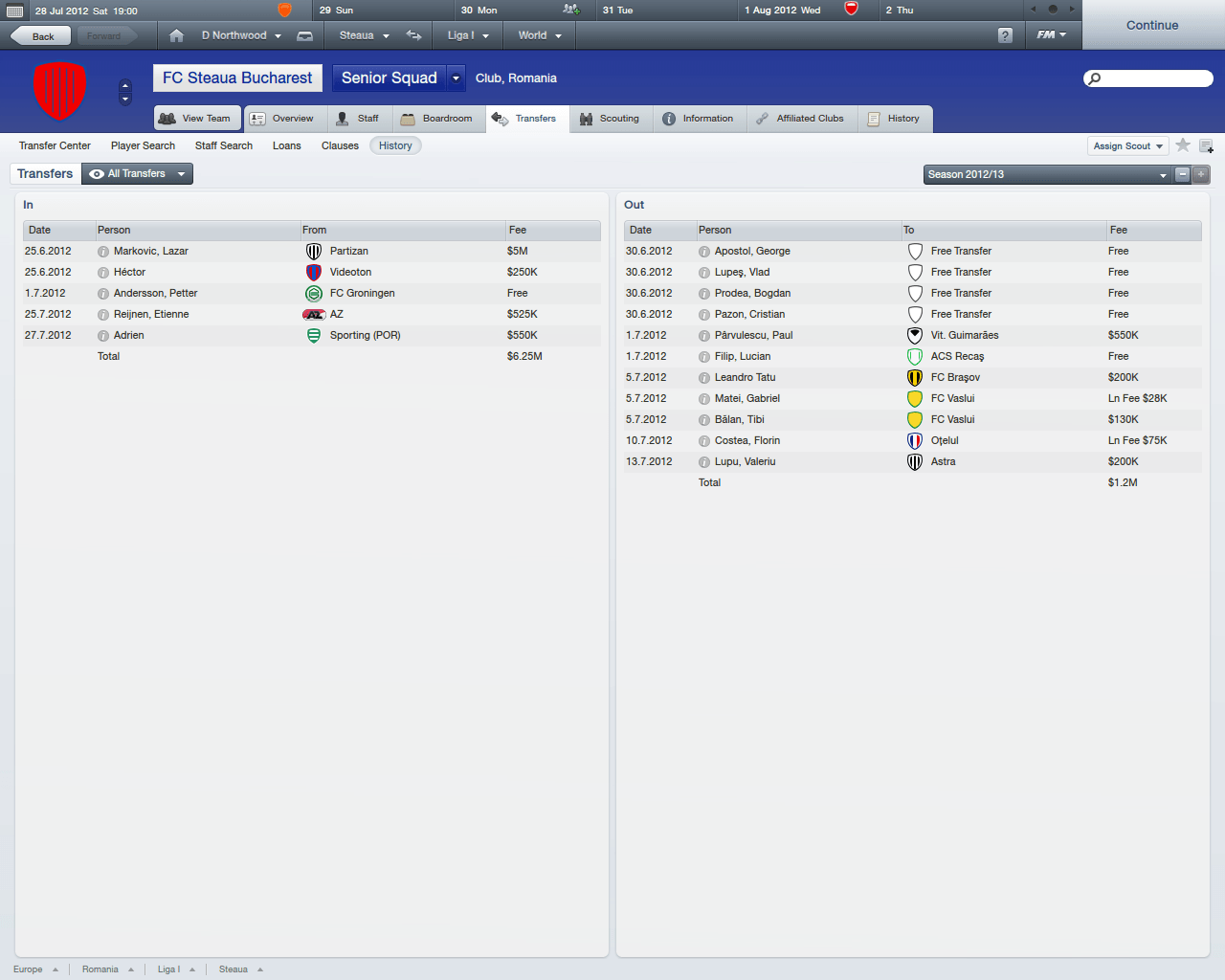 As you can see in the photo, Hector, arrived as the new first team DL, backed up by Latovlevici. Anderssen arrived on a free, having one month on his contract left due to Gronningen not being able to pay his demands. To continue the story, Steaua are preparing for the start of the season against Ceahlaul, after having a decent pre-season and a 2-1 victory against Vaslui for the Supercup, where, the new midfield from Gronningen has scored the winner.

Regarding Champs League, they will face Ekranas in the third round of the qualification, and hope they pass them easily. (Its funny cause Steaua is facing Ekgranas IRL too).
Login to Quote

What are your (and the board's) season expecations?
Login to Quote

crisrko
8 years
Group stage of CL, win Romanian league, this board always had hard expectation, but last season I passed them by a mile, atleast in Euro cup

crisrko
8 years
Steaua is in a jubilating form! They have won every match possible from the start of the season! After passing Ekranas and Wisla Krakow they have entered the CL groups with Bayern Munchen, Valencia and Clube Brugge, not the best group, but not the worst either.

I was thinking about making a goal of the month post each ingame month, I want some of your oppinions on that though! Should I or should I not?

The club is trusting Northwood's decisions, as the transfers completed have been incredible. Also, the curent playing form of several players is great! 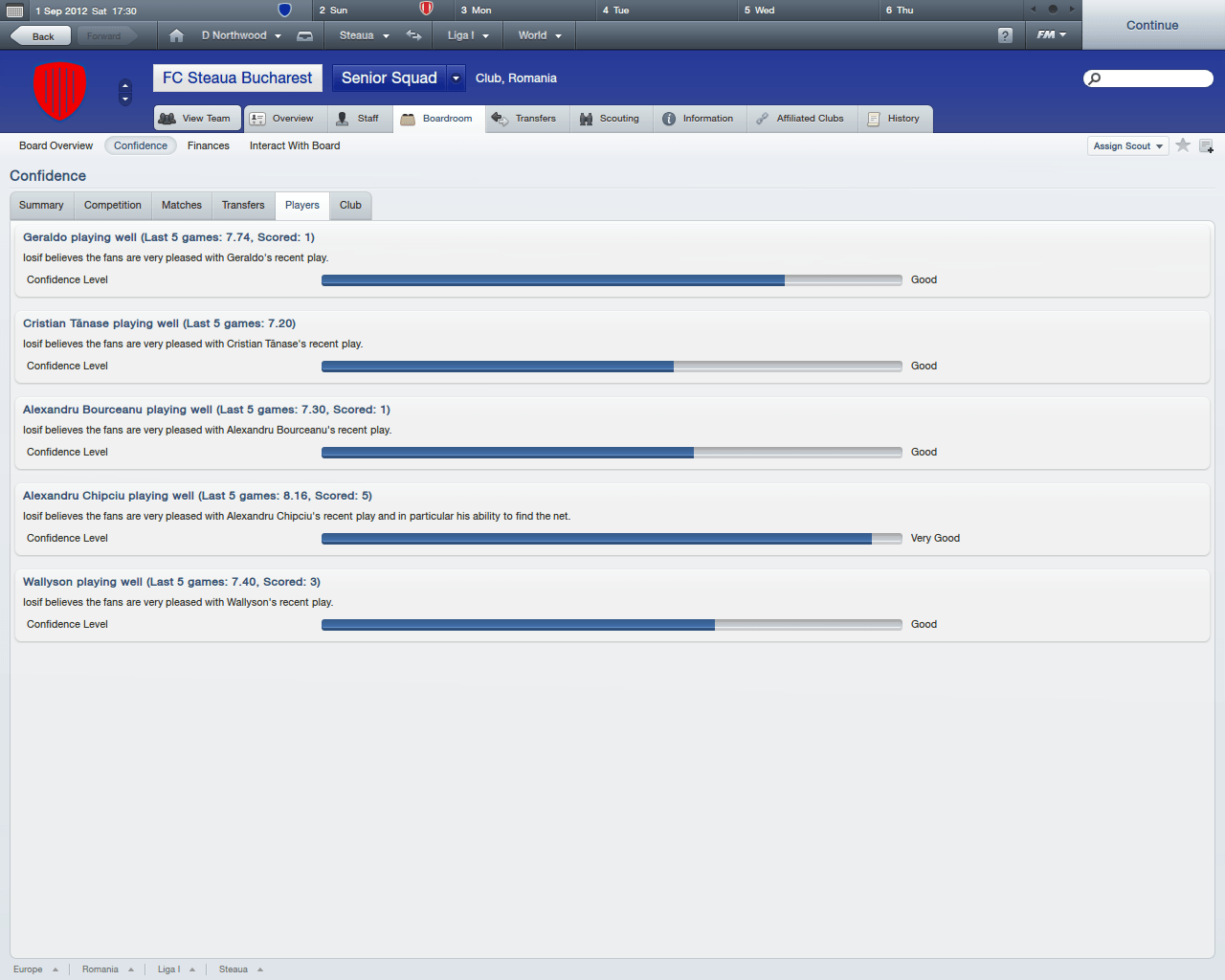 Here you can see the schedule Steaua went through, the CL groups matches are approaching fastly too. 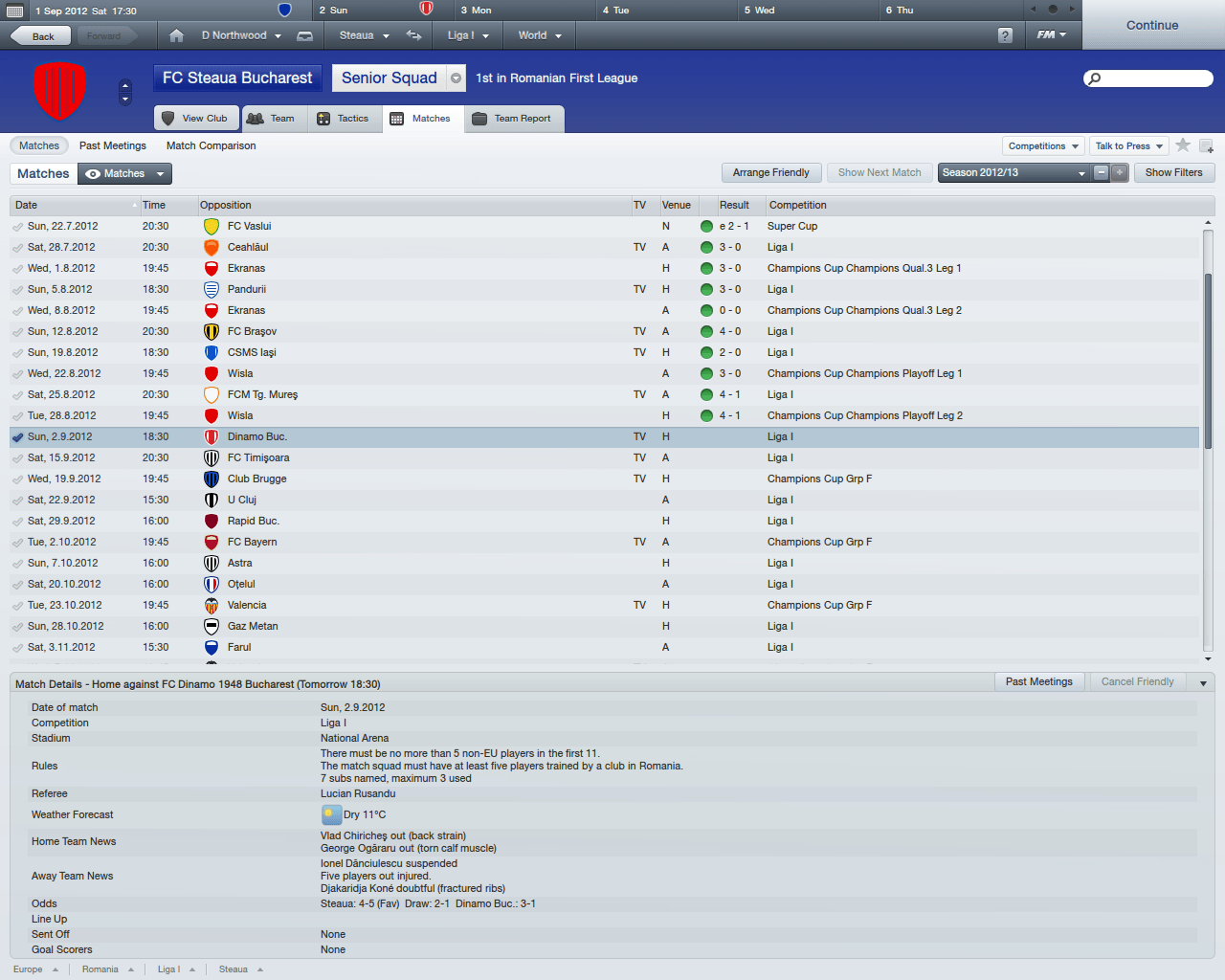 This is the curent squad that Steaua has, looking good for this type of a team eh? Players are developing and playing well. Let the form continue! 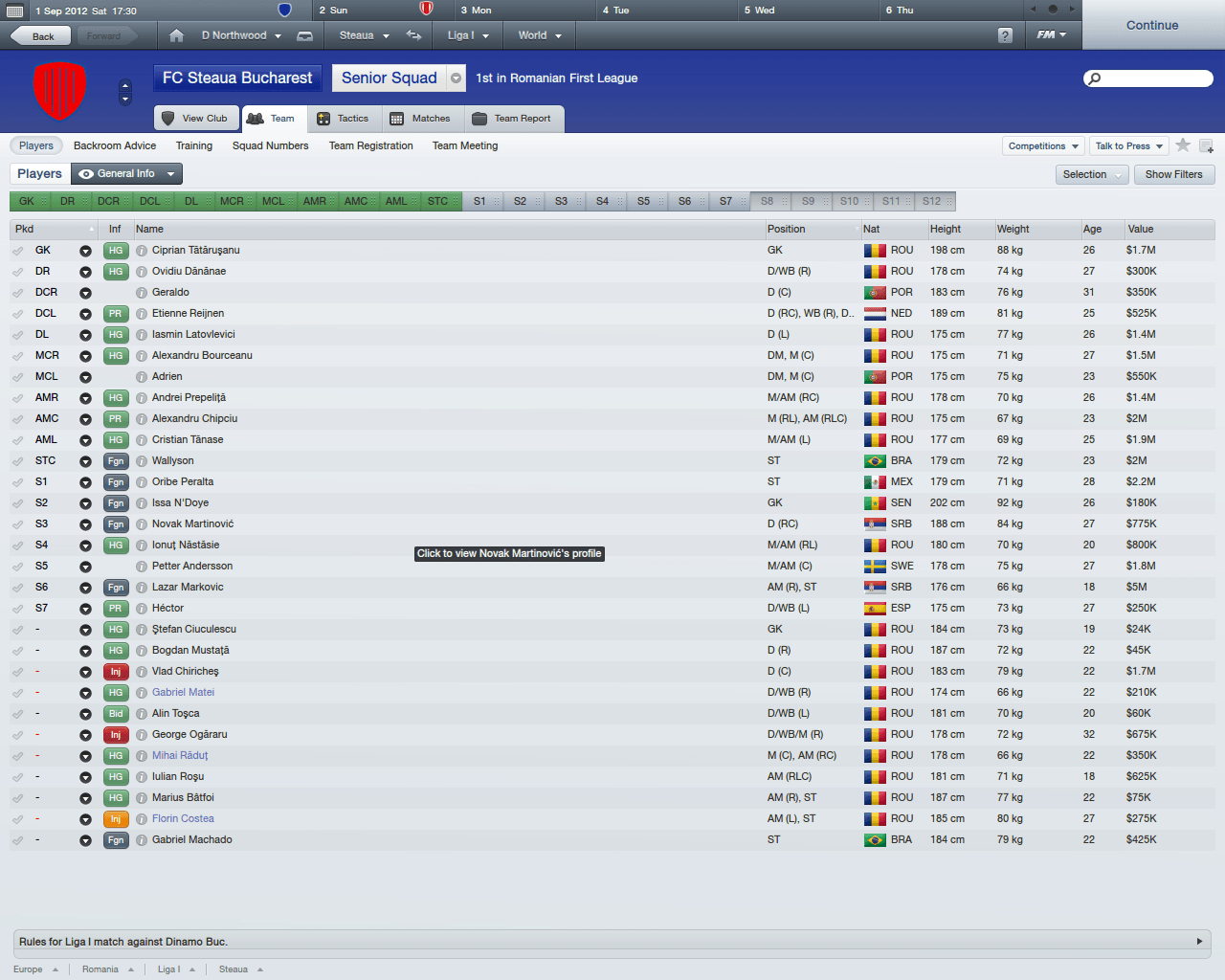 Akash
8 years
You are doing very well in the league, which is obviously expected, Steaua Bucharest being expected to finish top of the Romanian First League. I noticed that you comfortably defeated Wisla in the last Champions League Qualification round, and I am glad, because they could've posed a tough challenged. I have seen them upset Arsenal on one occasion in my save.
I also noticed the supporters being happy with Chipciu's form, but you might want to consider giving a lot of important to Markovic. He does very well in my save.

You are expected to be the whipping boys in your group, I'm guessing, but with your team, you have every chance of finishing second. A couple of wins against Brugge and manage a couple of draws against Valencia or Bayern should be enough.
Login to Quote

Gurdit
8 years
All the best for the CL groups. I can't offer the same insights which Akash can, because I generally only play FM in the big leagues.

But the advantage you have is that nobody expects you to do well in CL, so you're free of expectations.

crisrko
8 years
Half-way through the group, and Steaua is standing tall. They humiliate Valencia at home with a 4-0 win, the landmark being a volley from bosingwa in his OWN net, after injurying Steaua's first choice AML.
Steaua has sent a contract to David Bentley, lacking in AM's at the moment due to injuries. 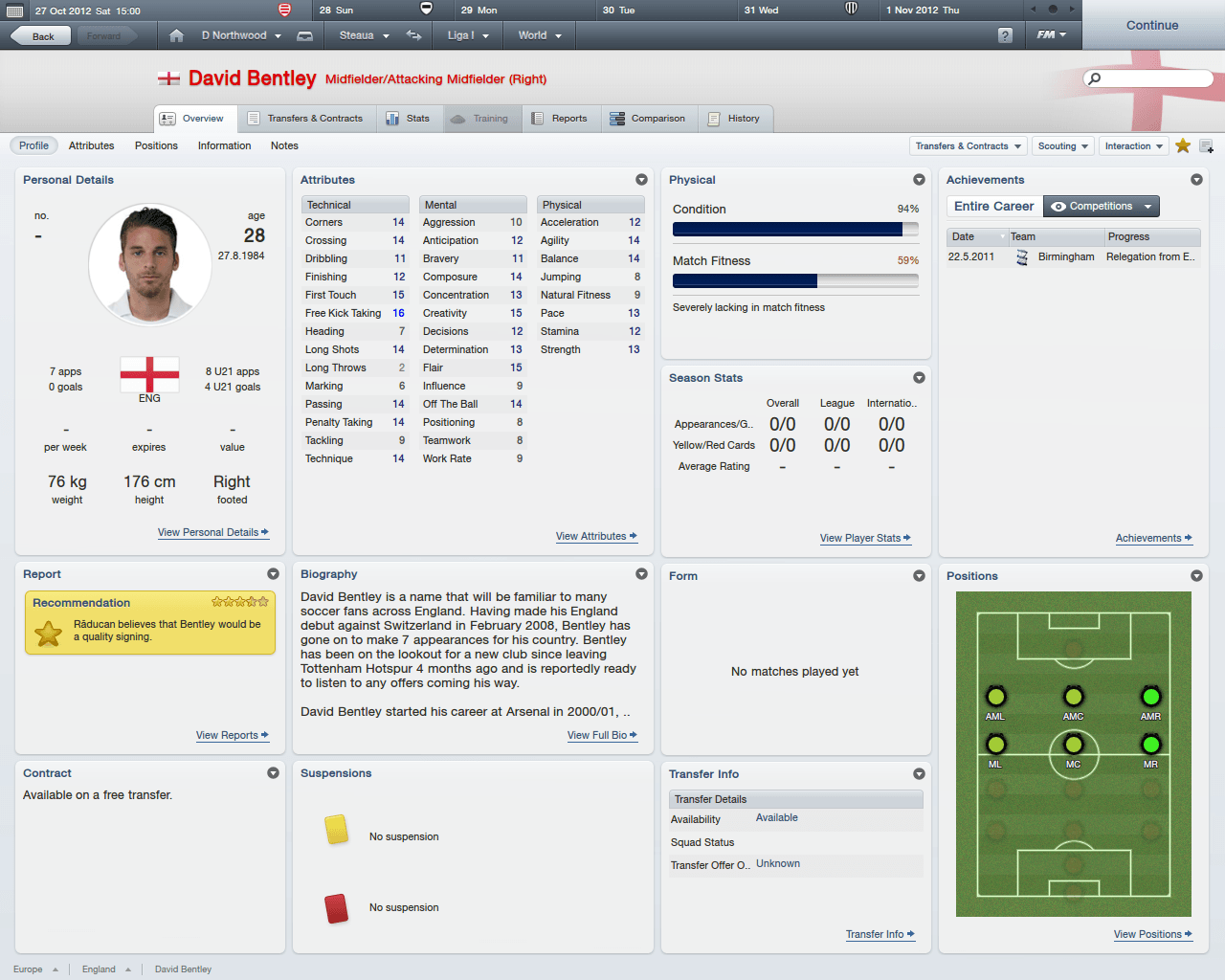 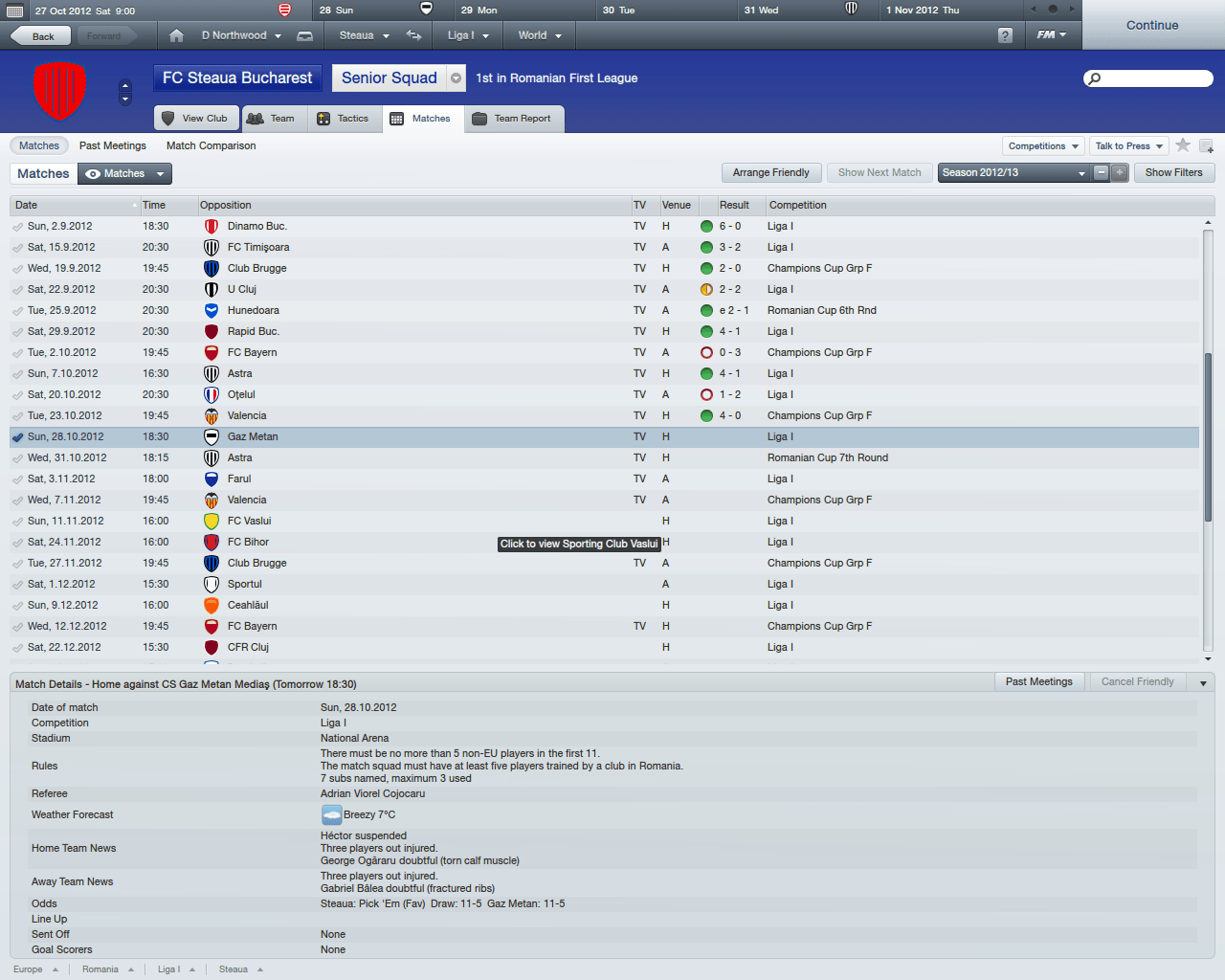 Akash
8 years
Found this beauty online - irrelevant to your story

crisrko
8 years
LOL akash.
Anyway, we managed to qualify from the group on second place (one more match left though, against Bayern) having Valencia on the third place with 4 points behind. Fantastic achievement for the romanian squad, and now they have time to prepare themselves considering their injury crysis.
Login to Quote 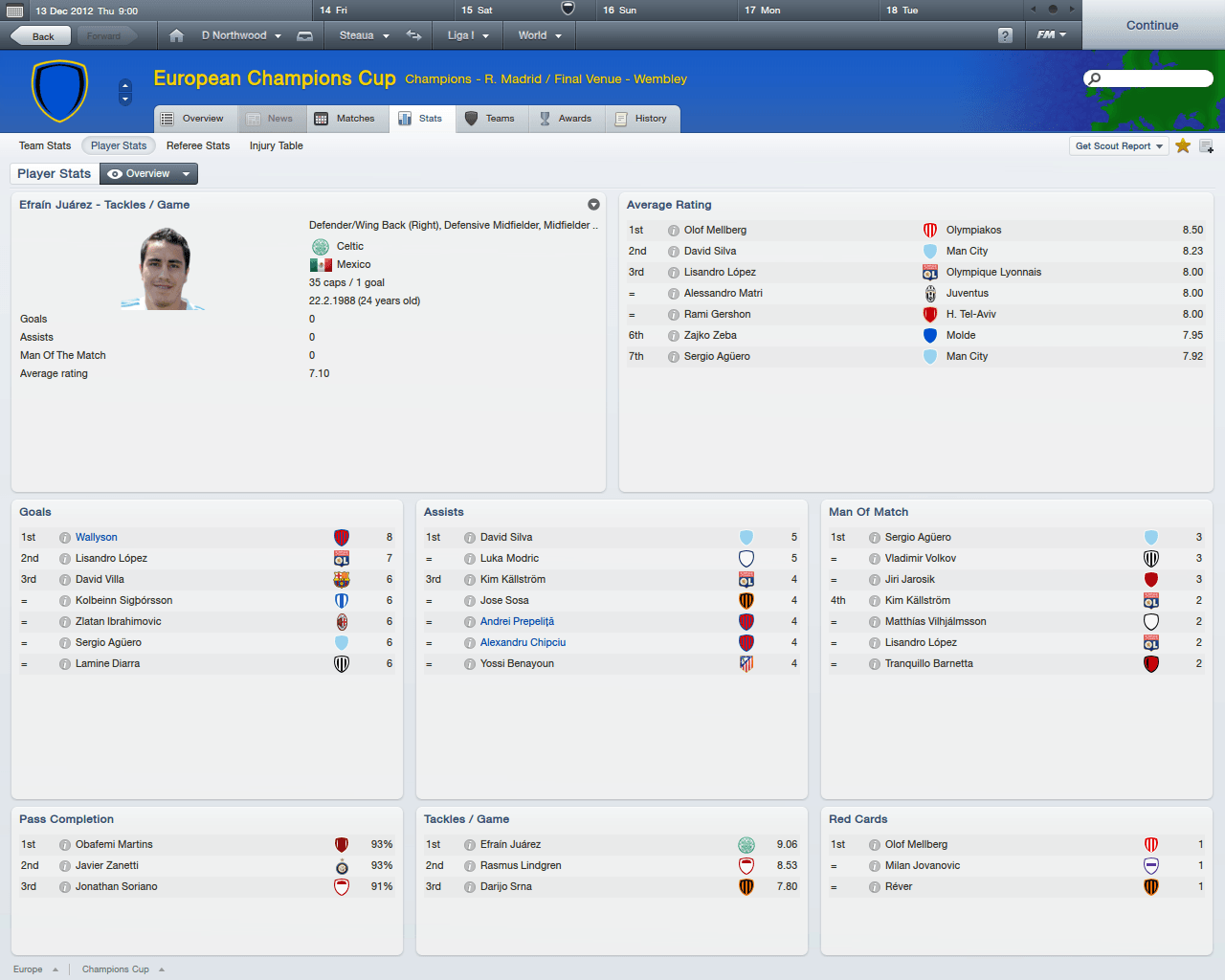 Wallyson is curently the top scorer in Champs League

And the ZomgW0W moment from this league 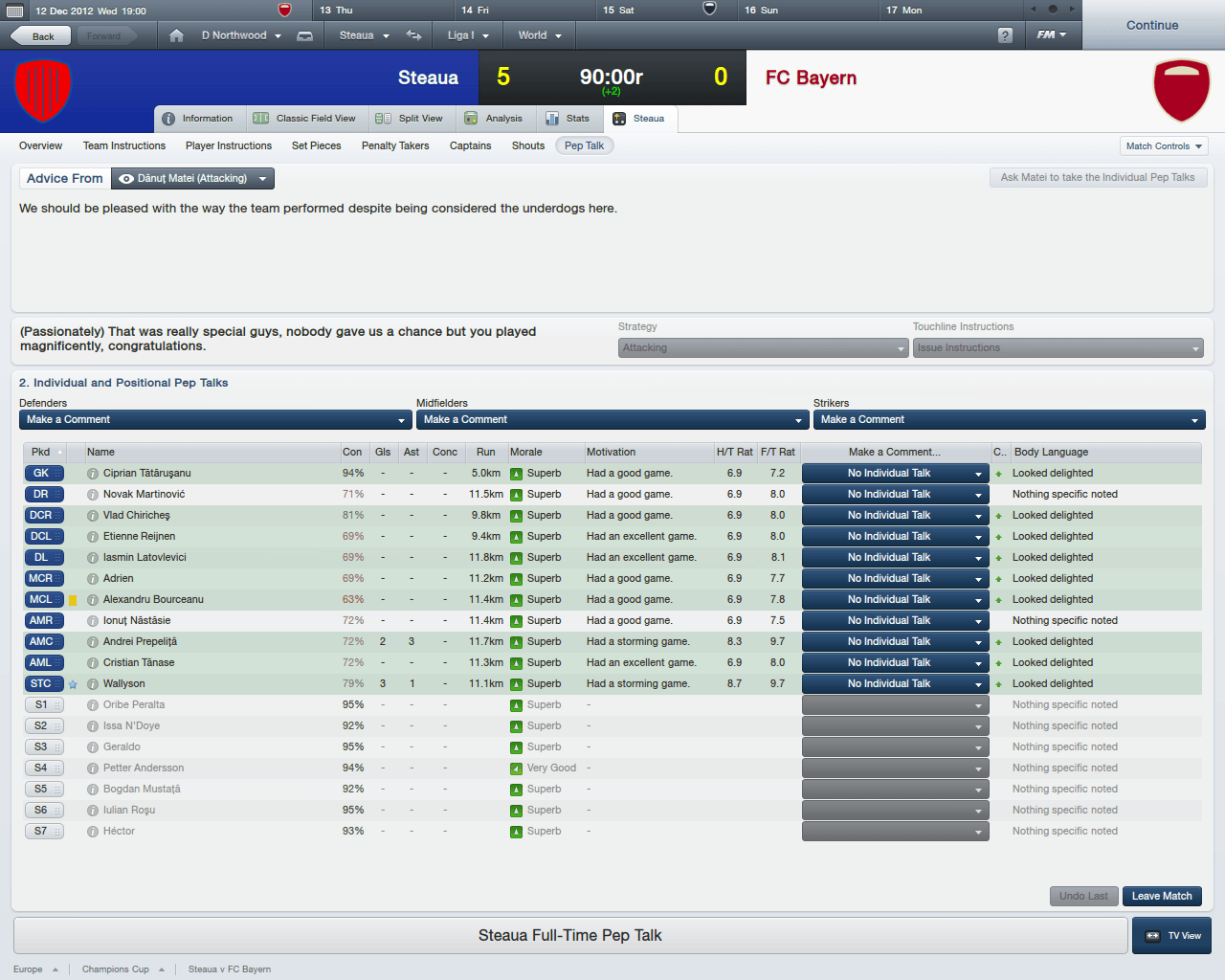 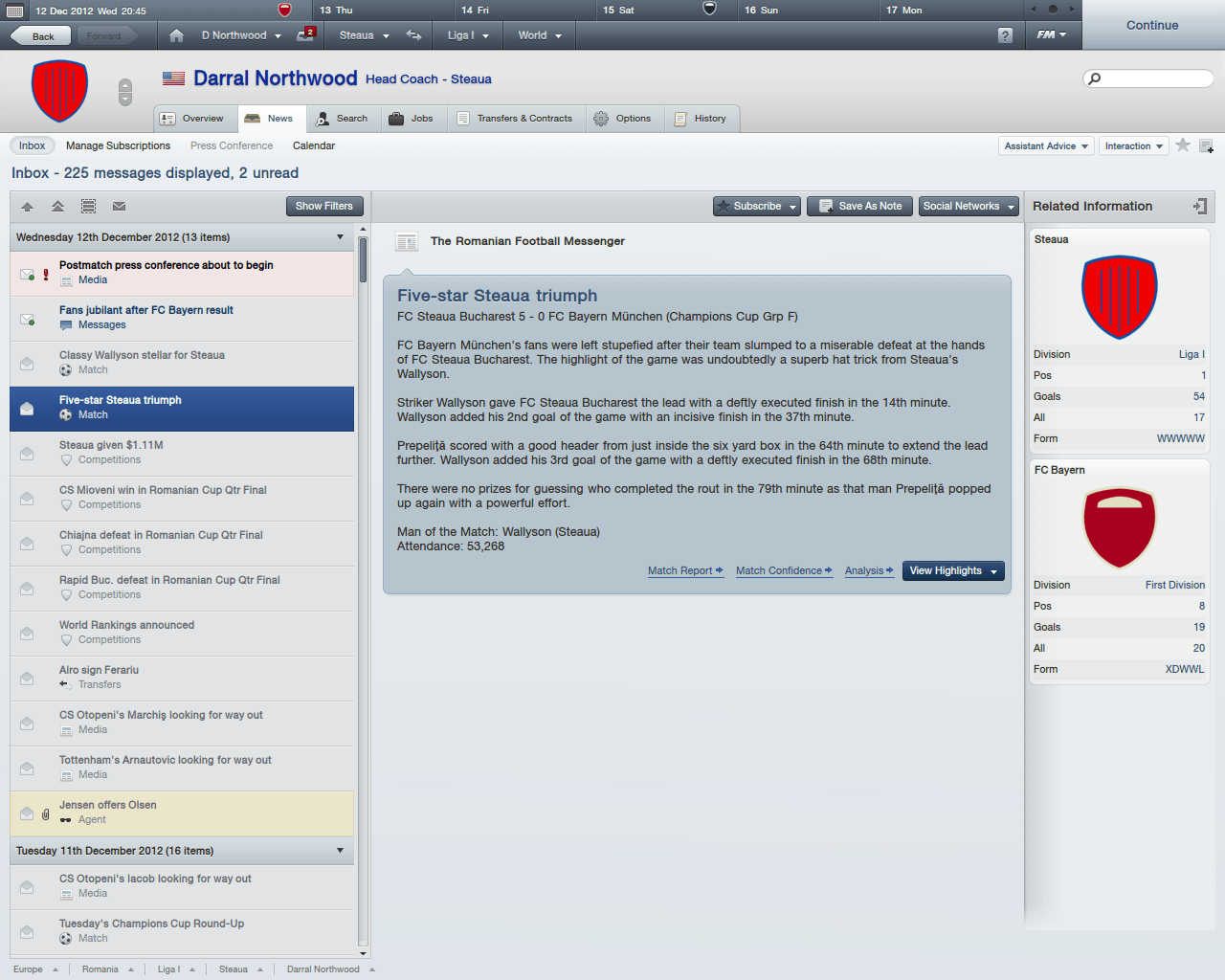