#65187 crisrko : Question to you readers, would it be wise to encourage Markovic in taking overhead kicks?!

Might as well - no real reason why not to. Really enjoying the story so far mate.
Please check out and comment on mine. My story
Login to Quote

crisrko
7 years
Cracking goal from Chipciu to secure a 2-2 draw against Schalke in the Champions Cup groups!
Another goal was Wallyson's, who's starting to get his form back to normal, having gone through a tough period, failing to score.

crisrko
7 years
Historical moment as Steaua manage to qualify to the next round, defeating 4-3 on aggregate, the one and only ManUTD.
Losing 2-1 at Old Trafford, they believed its over, but a phenomenal performance from Wallyson and Tatarusanu, coasted them to the next round! 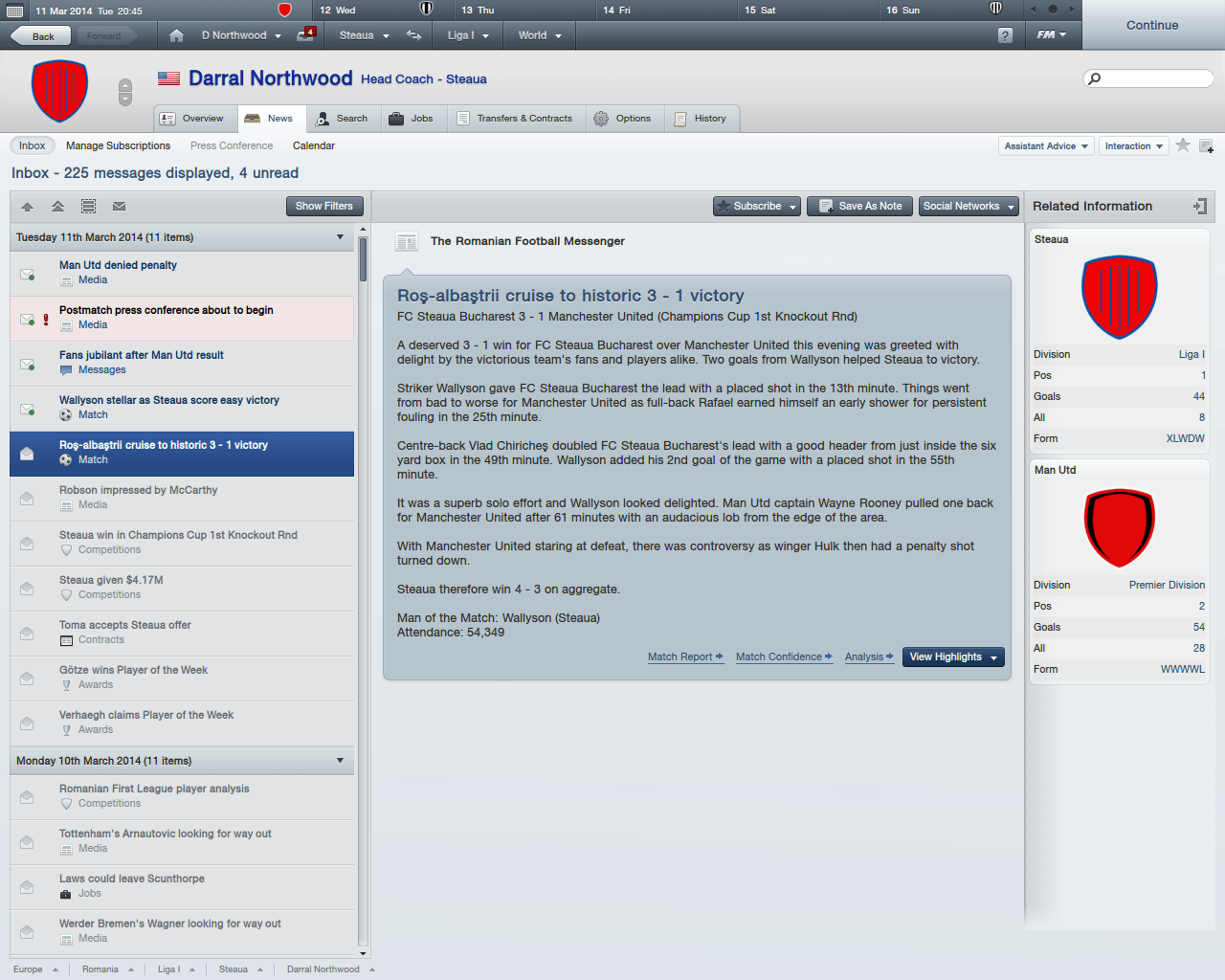 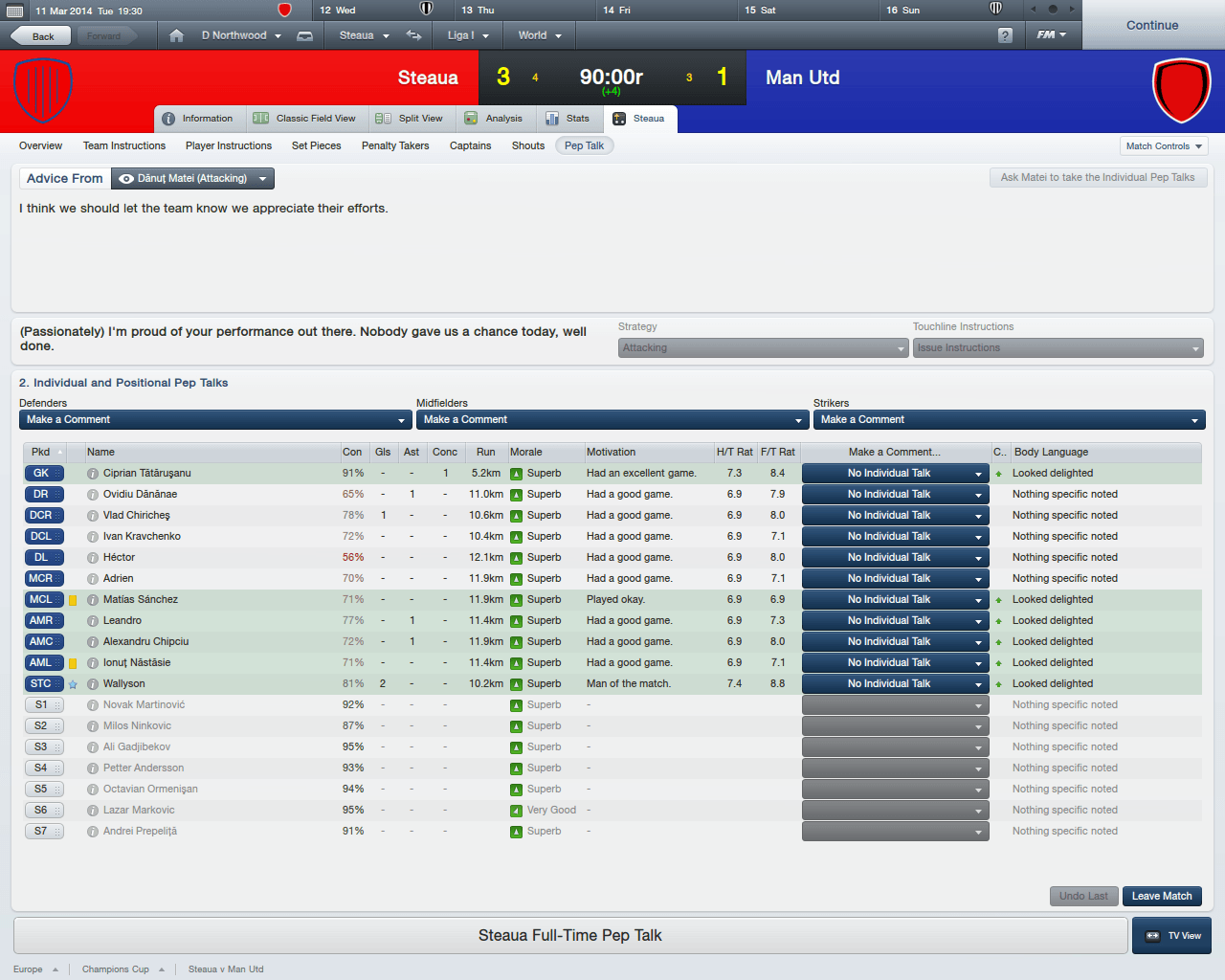 crisrko
7 years
And another season is gone. Steaua have reached once again the semi finals of the champions cup, getting knocked out by the surprising winners, Tottenham, 6-2 on aggregate. Steaua been phenomenal defeating ManUTD, and AC Milan on the penalties.

Wallyson was once again fabulous in all competitions, and this SS will show it. 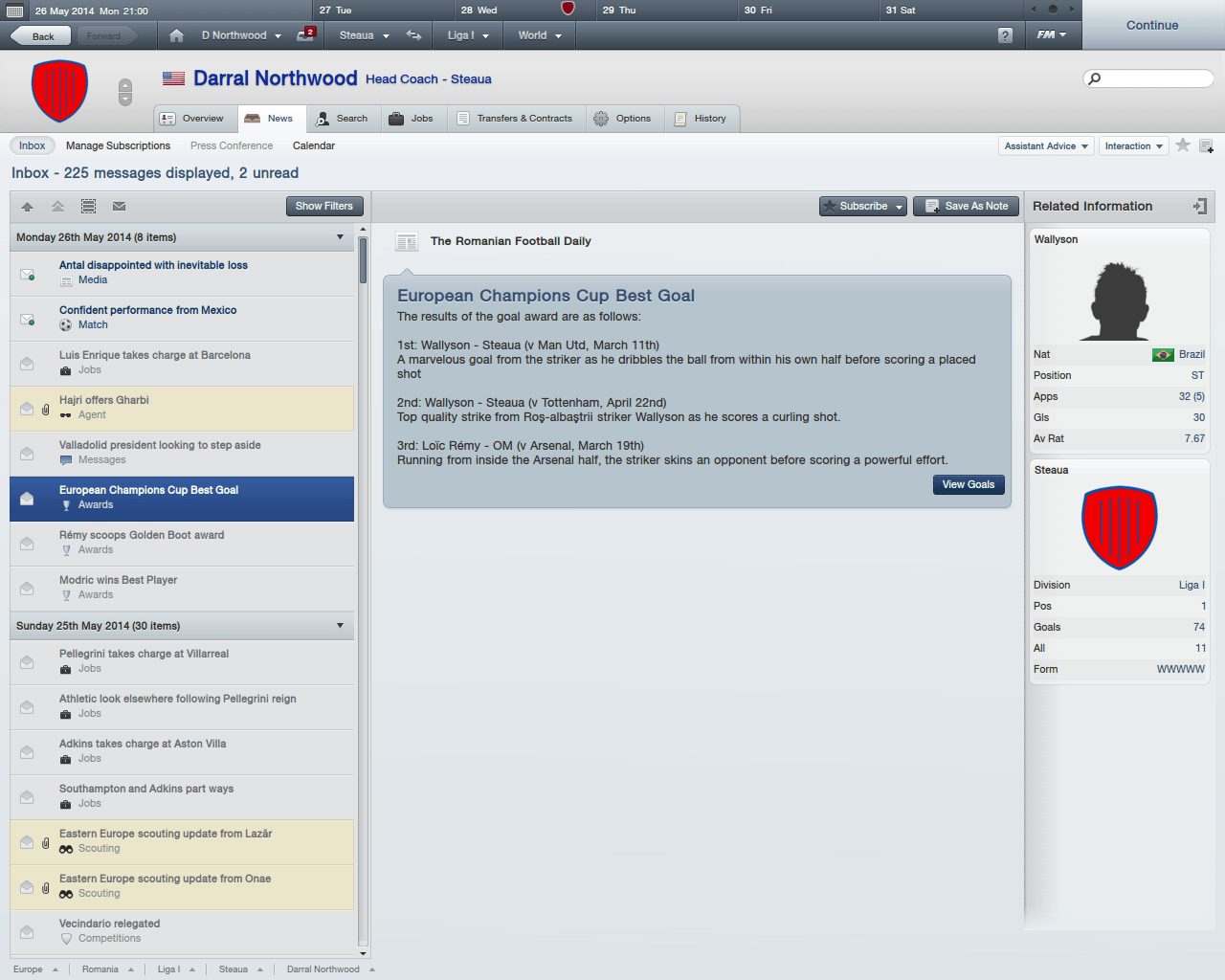 Steaua have dominated the league again.. 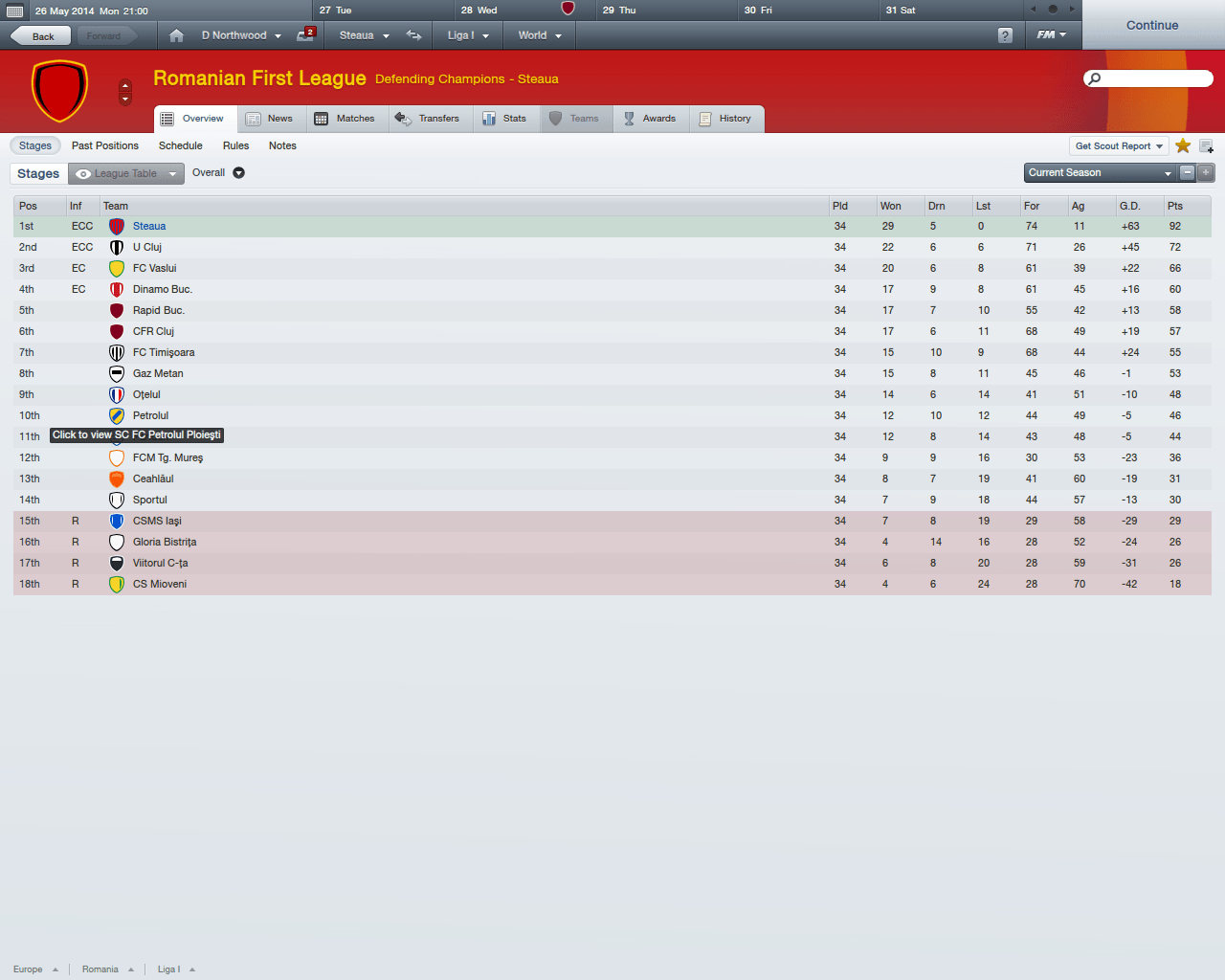 crisrko
7 years
Season 2014/2015 is now underway!
Steaua have played a few matches in the league, holding on a tight first place fight against CFR Cluj. Wallyson is curently the top goal scorer with 9 goals in the league from 6 matches, and 13 goals from a total of 11 appearances for the club. After Bourceanu's transfer from the club, the vice-captain role was left uncertain, and finally carried out to the keeper, Tatarusanu. This season, after a long coaching staff meeting, Wallyson was announced as the new captain, with Tatarusanu as his vice'. 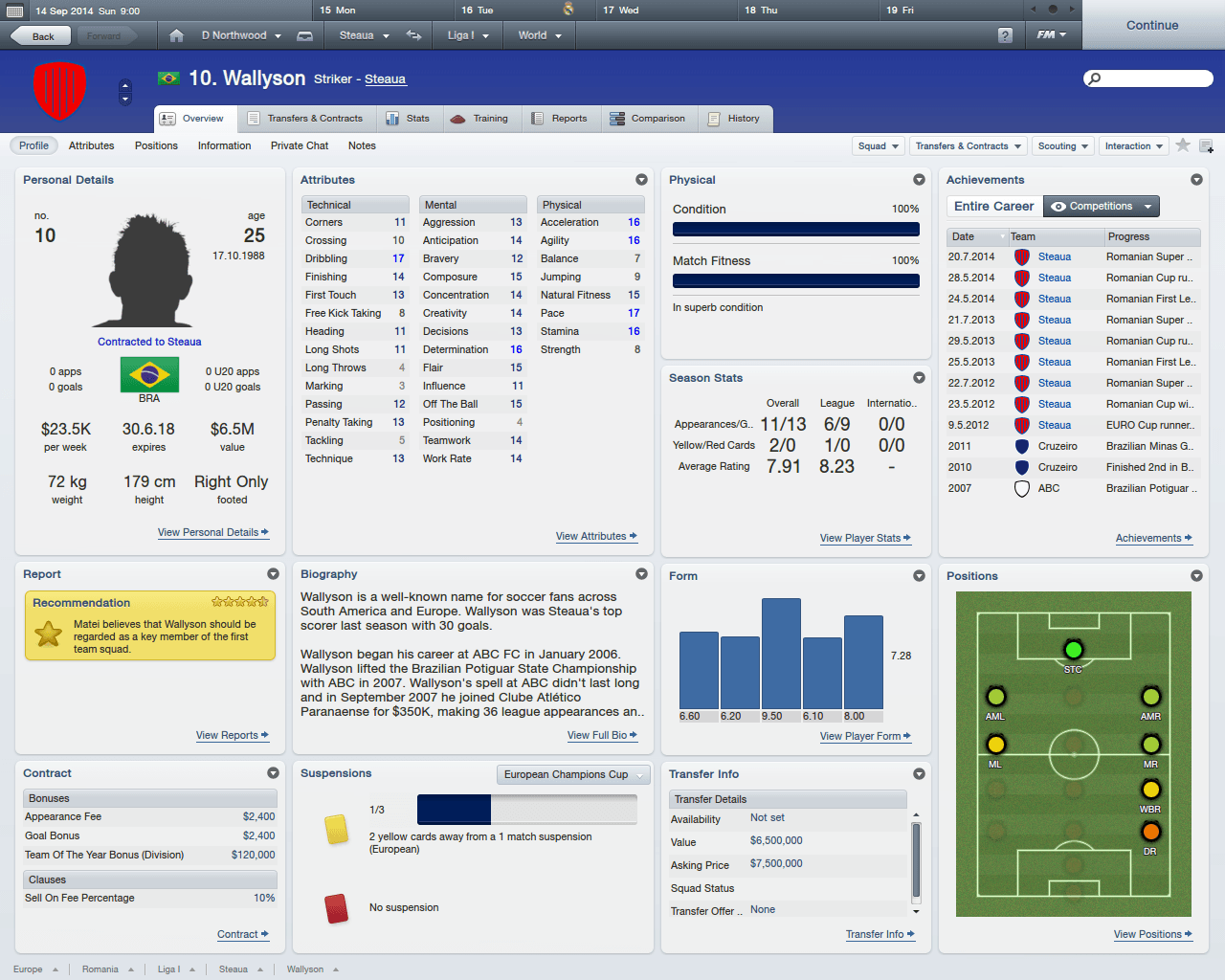 Now going to the matches. Steaua have achieved 5 wins from 6 matches in the league. They have once more qualified for Champions league, but luck is not with the Ros-Albastrii this year. They fell in a tough group, with SLB, Real Madrid and Partizan awaiting them.
Quoted from the Steaua headcoach: "This will not be an easy Champions League journey, thats for sure. But considering the new signings and such, I say we're in a pretty good position". 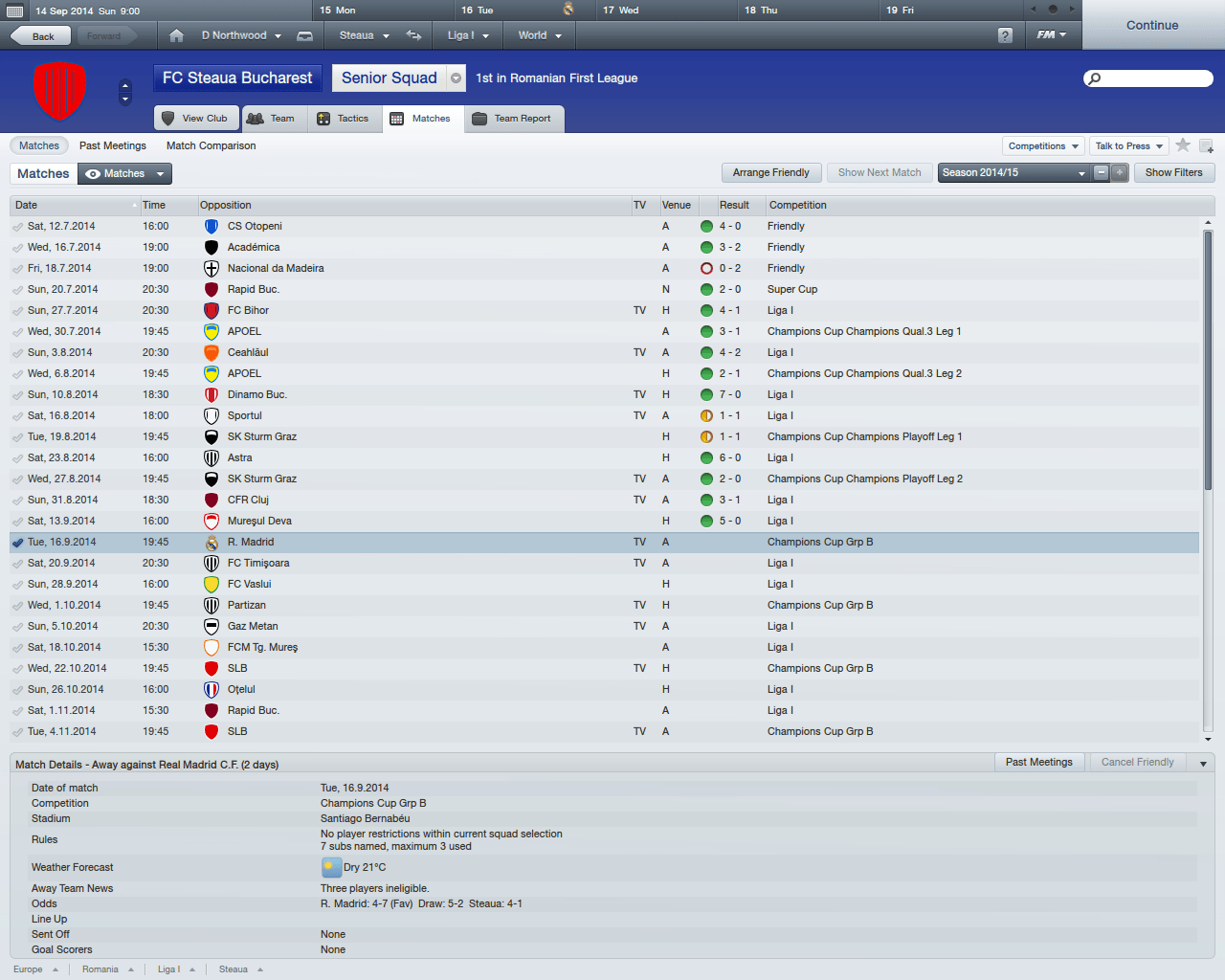 As far as the transfers go, you will have a few surprises! Craig Dawson, Fabian Delph and Escobar have all joined Steaua Bucharest for a combined fee of 7.5 milions. What transfers these are. 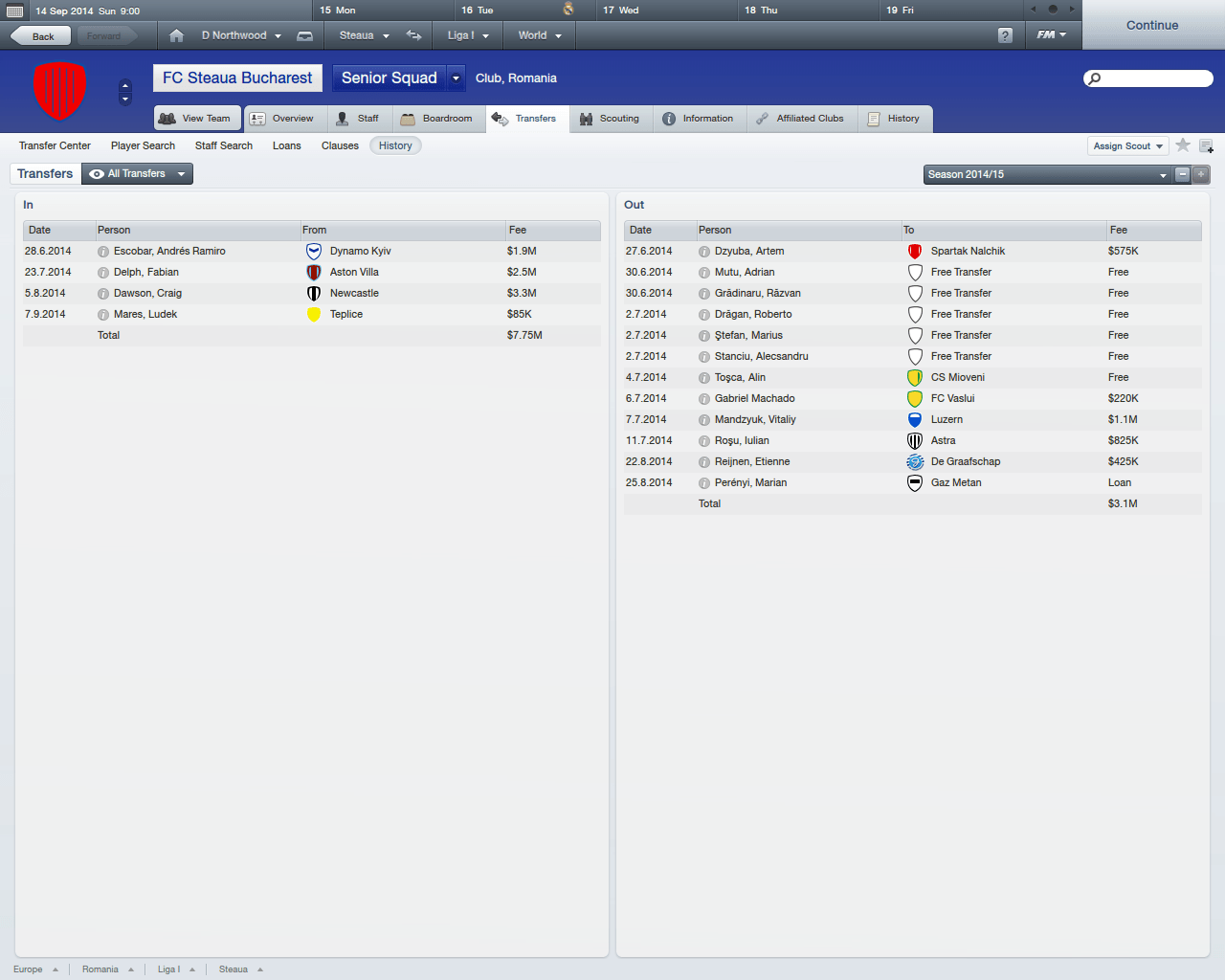 crisrko
7 years
Steaua trashed to pieces by Real Madrid. 5-1 was the final score on the Bernabeu. The Steaua headcoach has heavily trashed the team after the match.
Login to Quote

Akash
7 years
Crisko, Wallyson is an absolute beast! To be honest, I've always had my scouts recommend him to me, but I never cared..now, I am very interested.
Escobar? Delph? Dawson? Those players should do well for you in Romania and in Europe.
Real Madrid, this 5-1 humiliation will be avenged!
Login to Quote

crisrko
7 years
And its that part of the year again! January/February!
Chipciu, Steaua's AMC and star player is curently targeted by Arsenal, which will gave Darral a headache, in making him stay. Alot of transfer rumours this season, and Leandro Damiao has just joined Arsenal for 24.500.000$ on a four year deal. Arsenal are up for signings, since they're now looking at Chipciu.
Escobar has unfortunately asked for a transfer request, and I decided to give him it. Not sad about it, bought for 1.9 and sold for 2.8, pretty good deal. I didn't rated him so much, and since Wallyson was dominating, he didn't get that much playing time. Ormenisan is also on his way out, being an complete a*****, as he didn't play well. I didn't give him attention, since he always made mistakes, so he wanted terminated contract. Not gonna cry about it, got two more keepers that I need to develop anyway. Mares Ludek is one of the keepers, Czech himself, and it seems that there are good regens coming up!

Bogdan Stancu and Siegrist, the young promising keeper from Aston Villa will join Steaua at the end of the season, boosting up their ranks. 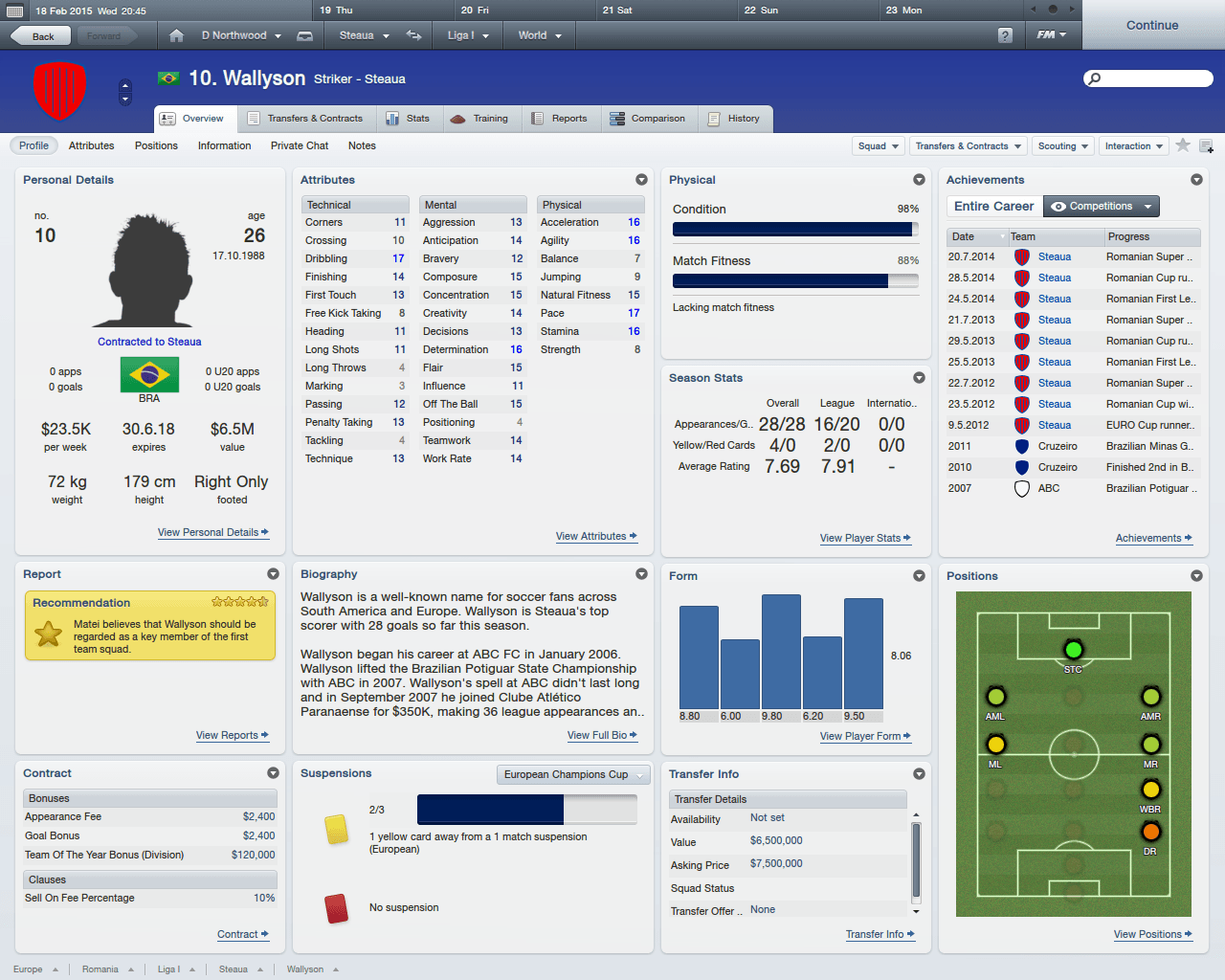 This is Macek! Not any incredible stats, but he surely is promising. 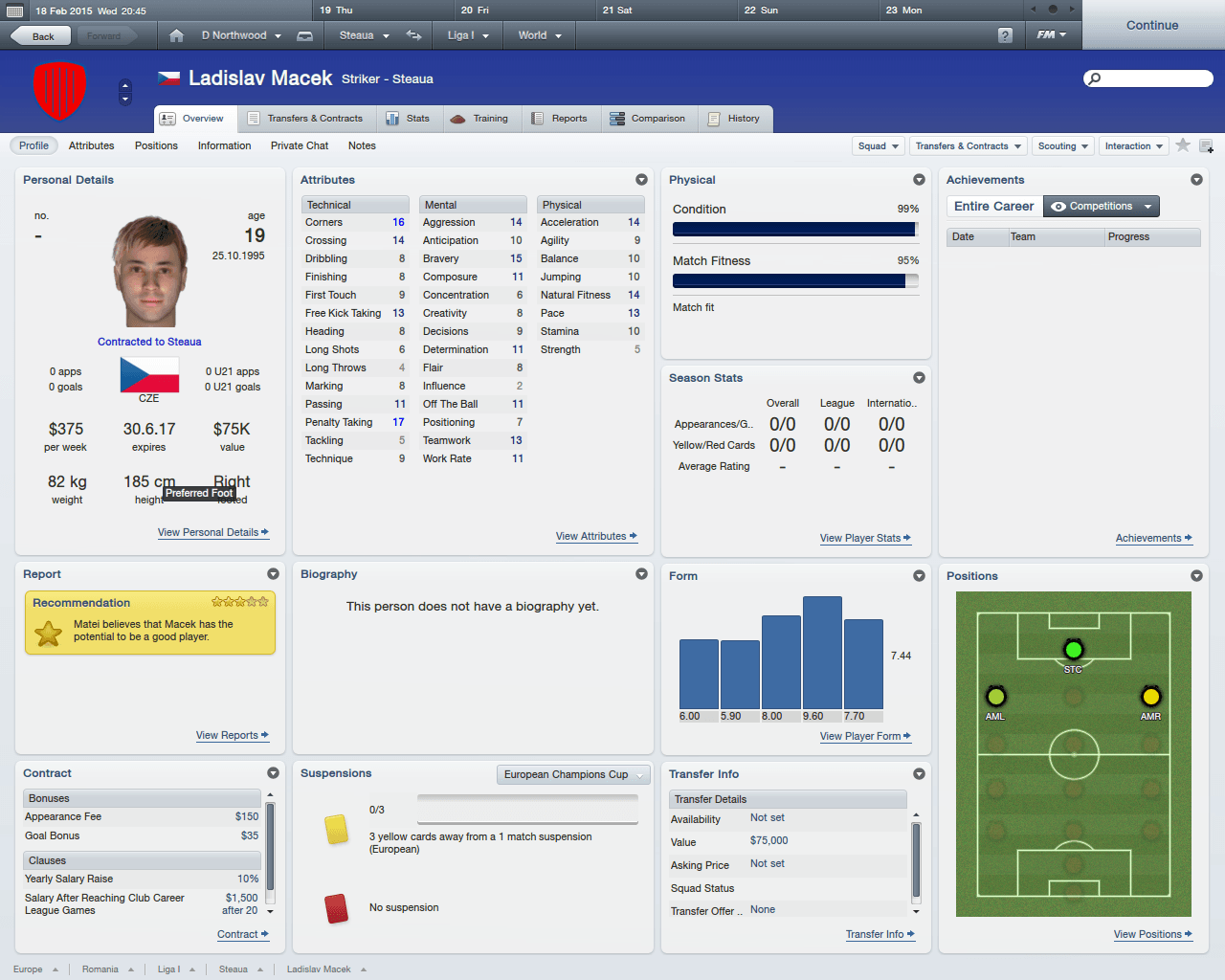 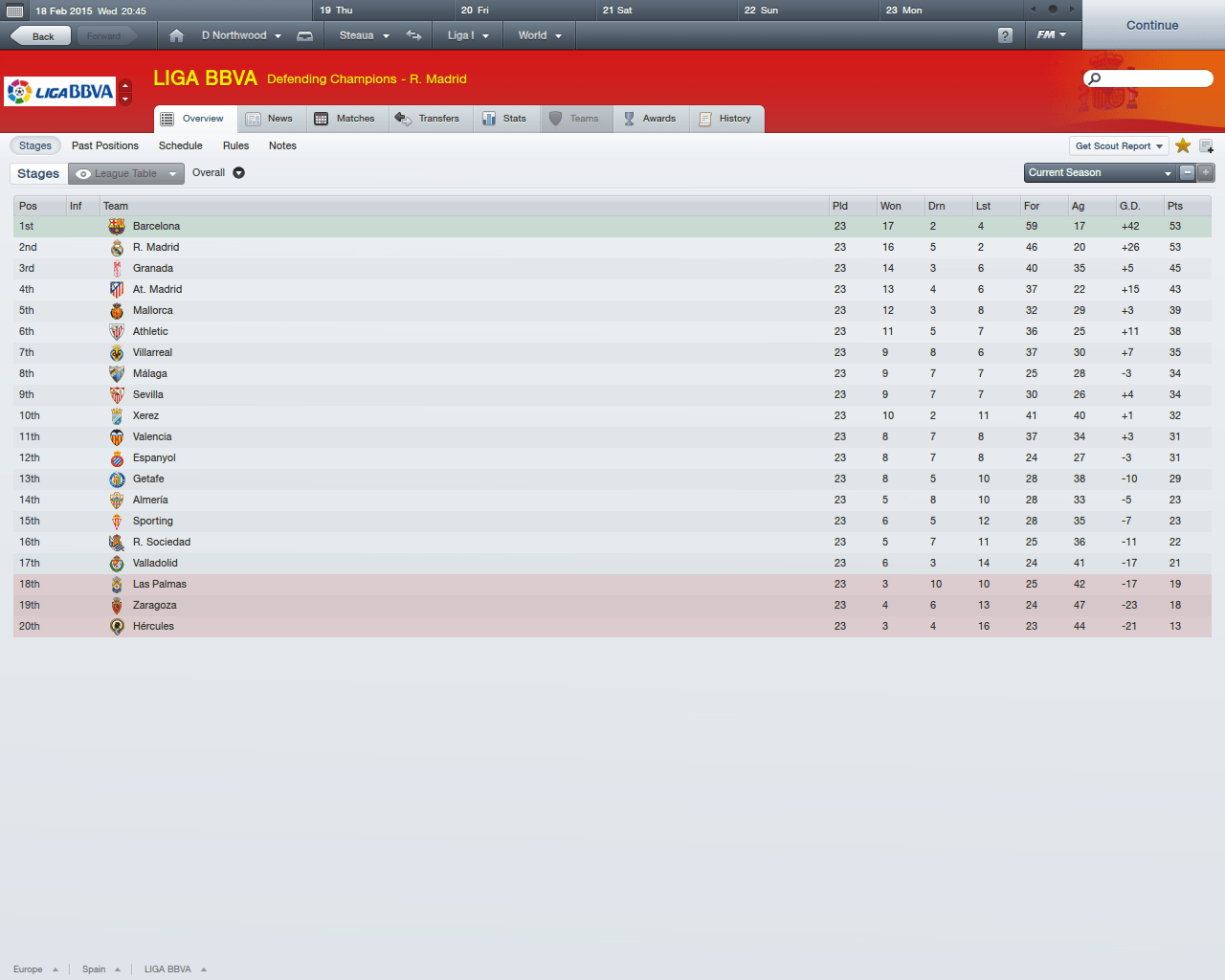 crisrko
7 years
Steaua continue rocking through the league! Wallyson reached a value of 7.25 milion dollars, as he marked his 40th goal this season. He's curently leading the league's top scorers with 31 goals, and Champions league with 9 goals. 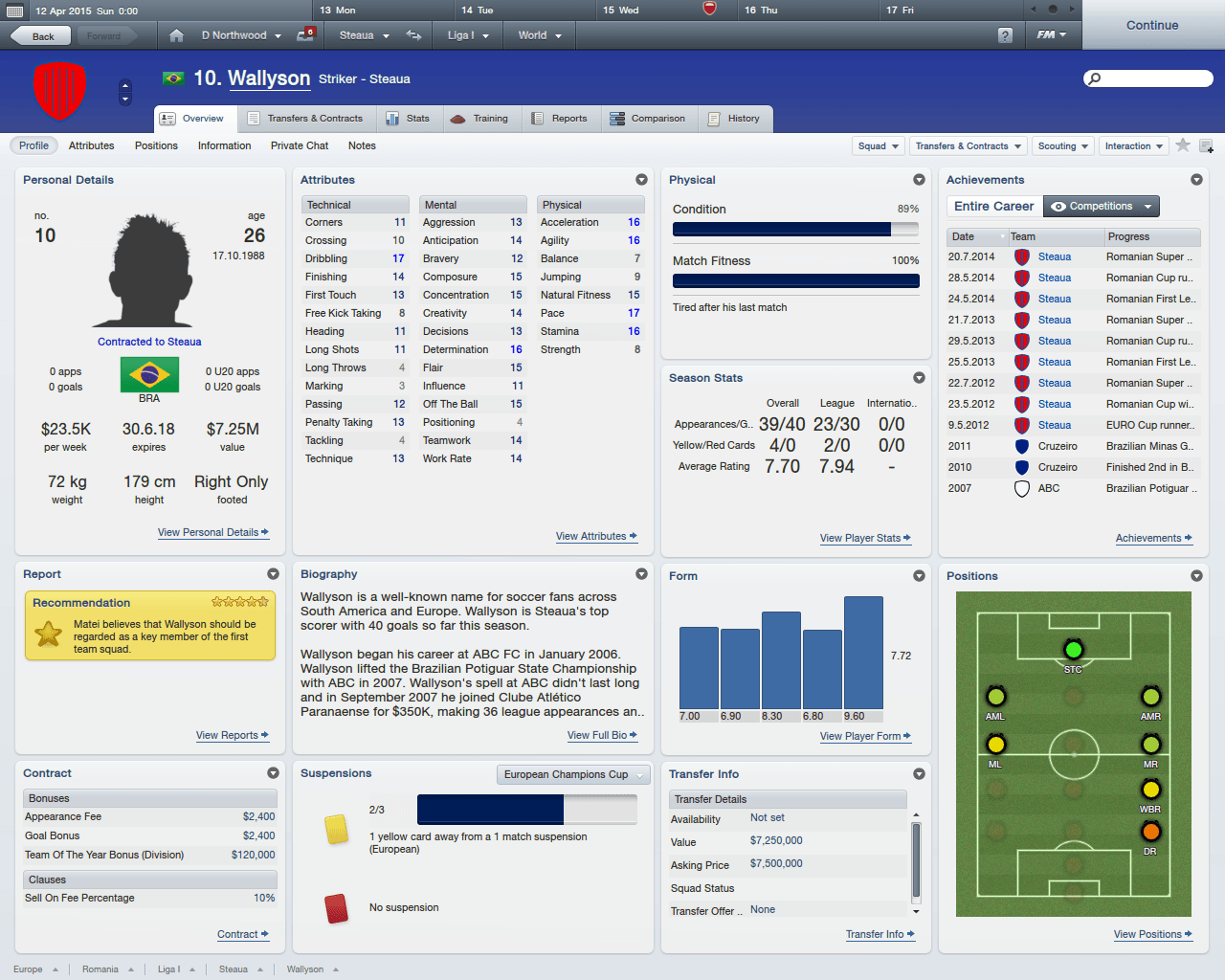 Chipciu, this boy continues to be phenomenal. For the past 3 months, Arsenal and Lyon continued scouting him, and I'm afraid that if they make a move, I'll lose him. And if I won't, I hope he won't ask me for a incredibly big payment. 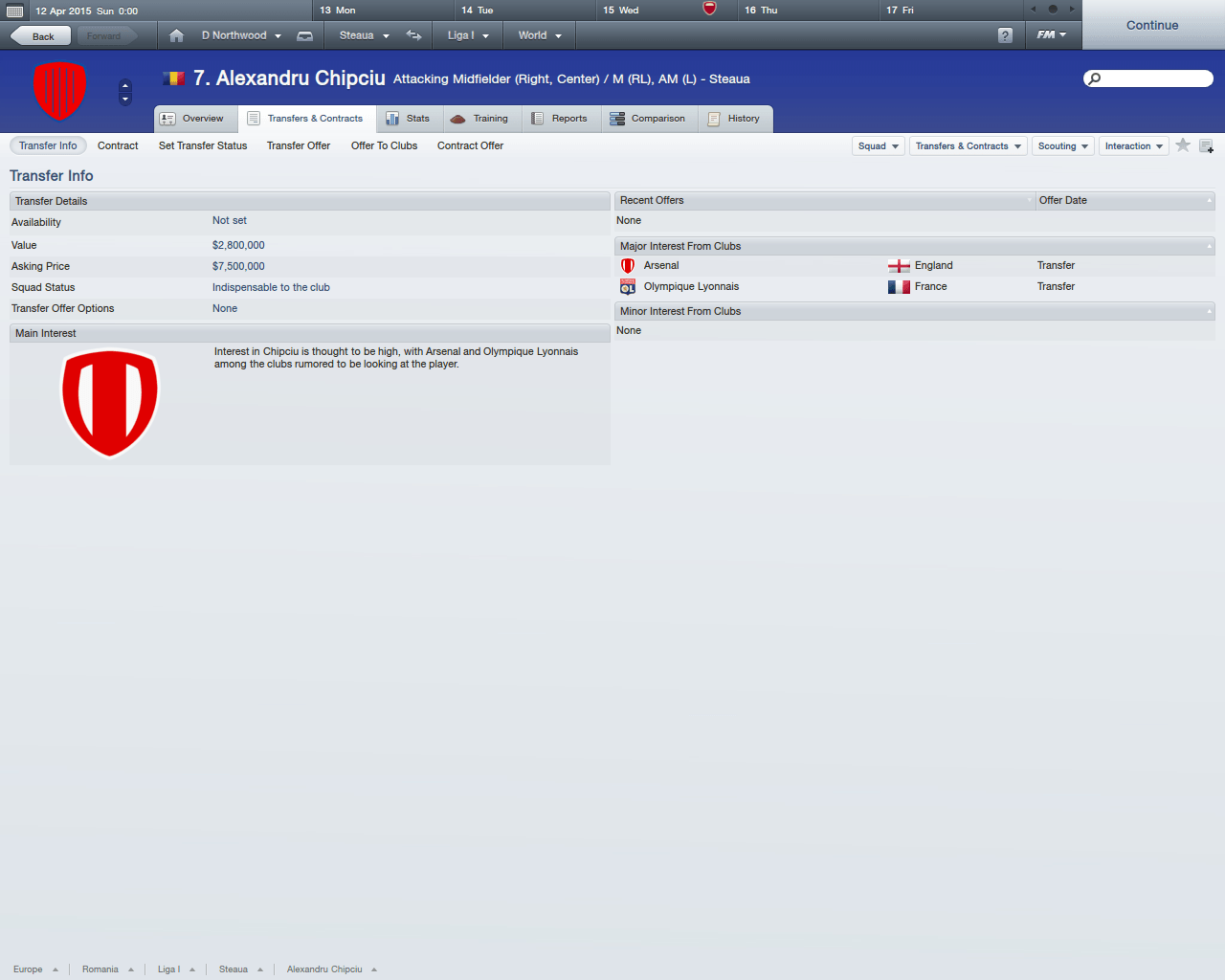 Champions league isn't too bright for the team, having lost 2-0 against Bayern Munchen on Allianz Arena, can they pull one more upset?! 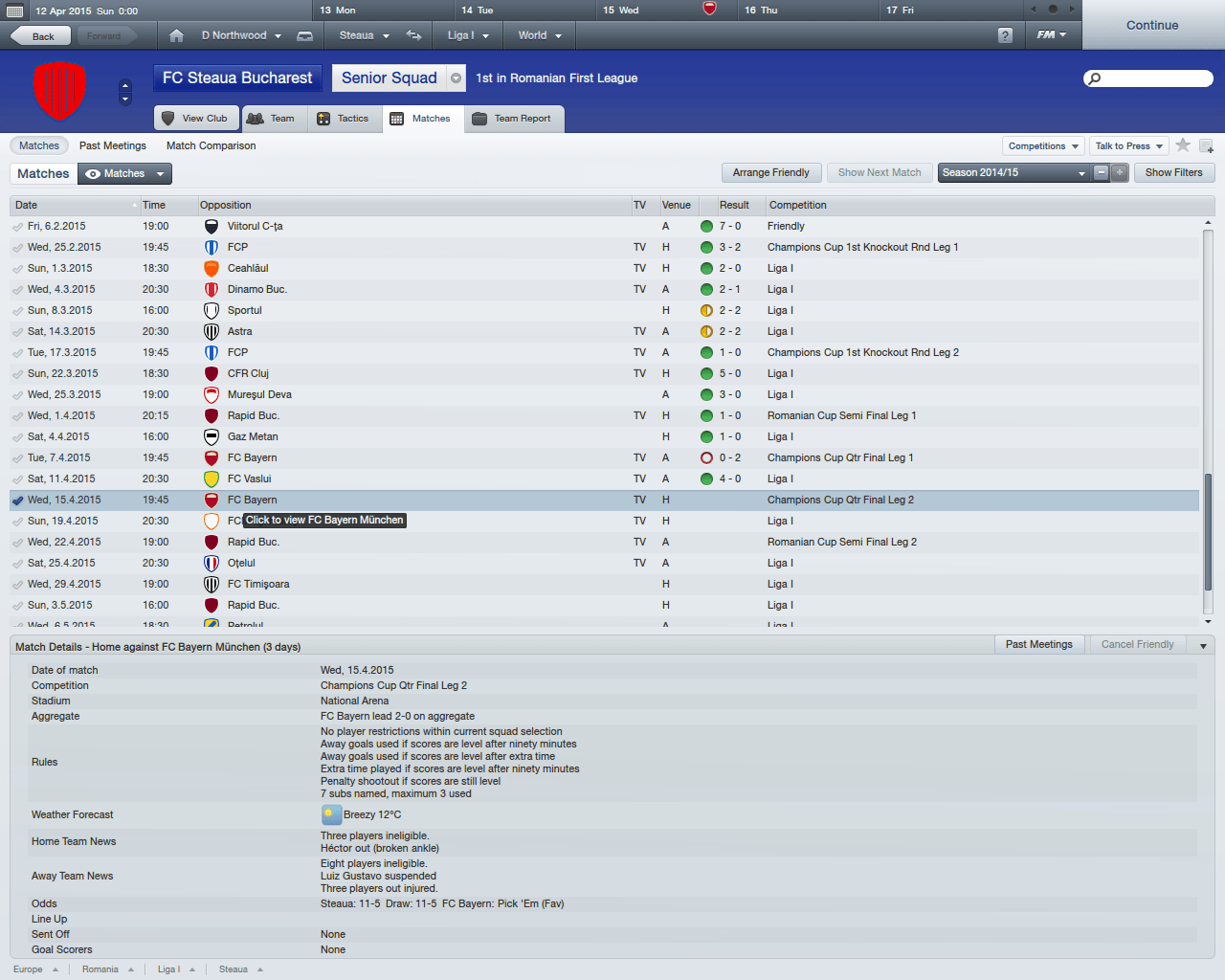 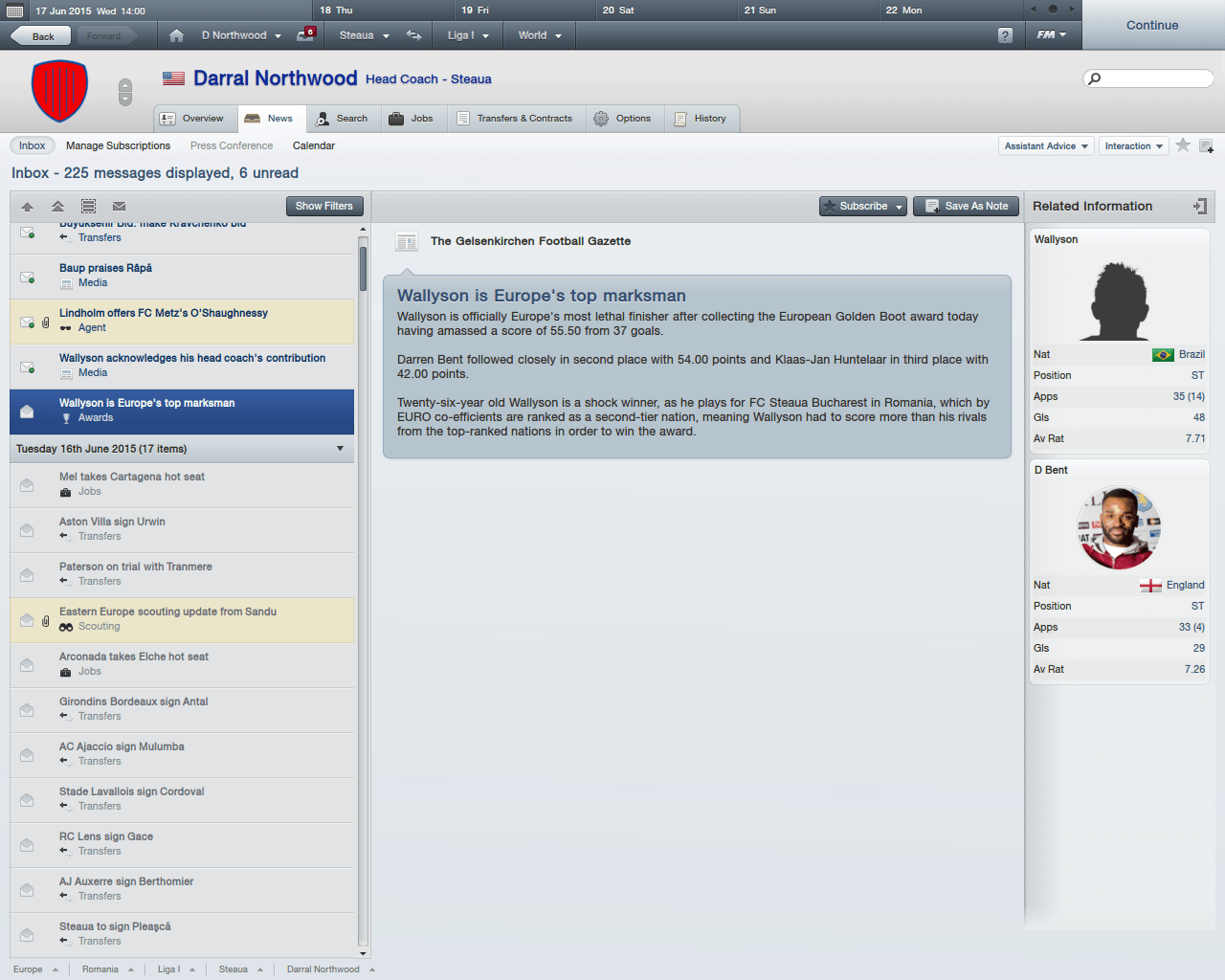 crisrko
7 years
As we prepare for another season, Steaua are preparing their new squad and making the transfers that will assure them the title again, and probably some high spot in the champions league. 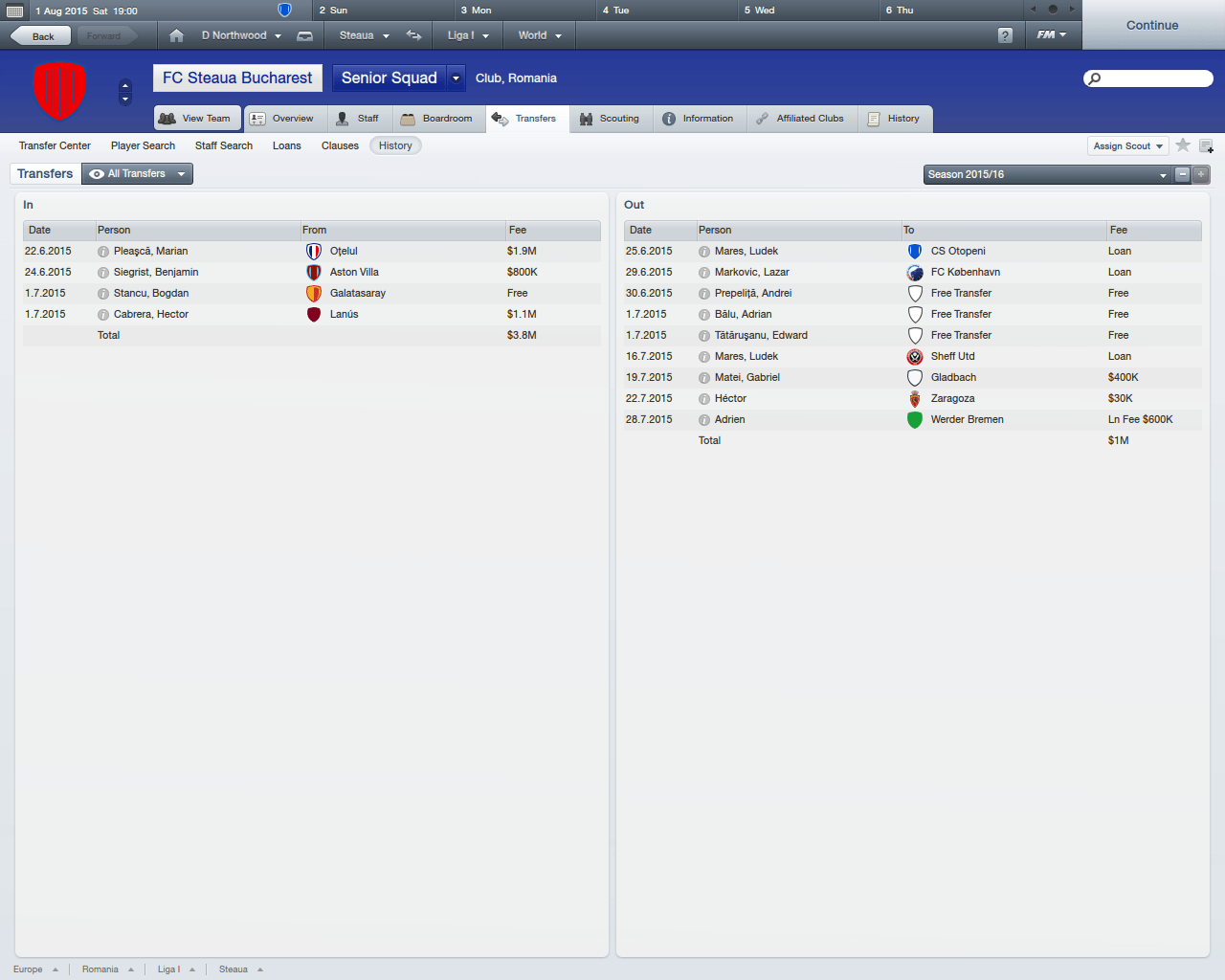 Steaua have bought right-back Plesca from Otelul to replace Ogararu, whom is extremely old at the moment and may not be good enough to perform in Champions League anymore.
After the staff decided to loan out Adrien, the club's playmaker and one of their key players, Steaua are looking to loan in either Suso or Shelvey, from Liverpool, or maybe Josh McEahren from Chelsea. They can afford the loans, but its up to the players if they want the move.
Promising striker Lazar Markovic is also leaving on a loan for the full season, since he needs playing time to develop, and because of Wallyson, Markovic wouldn't have that much playing time at Steaua. 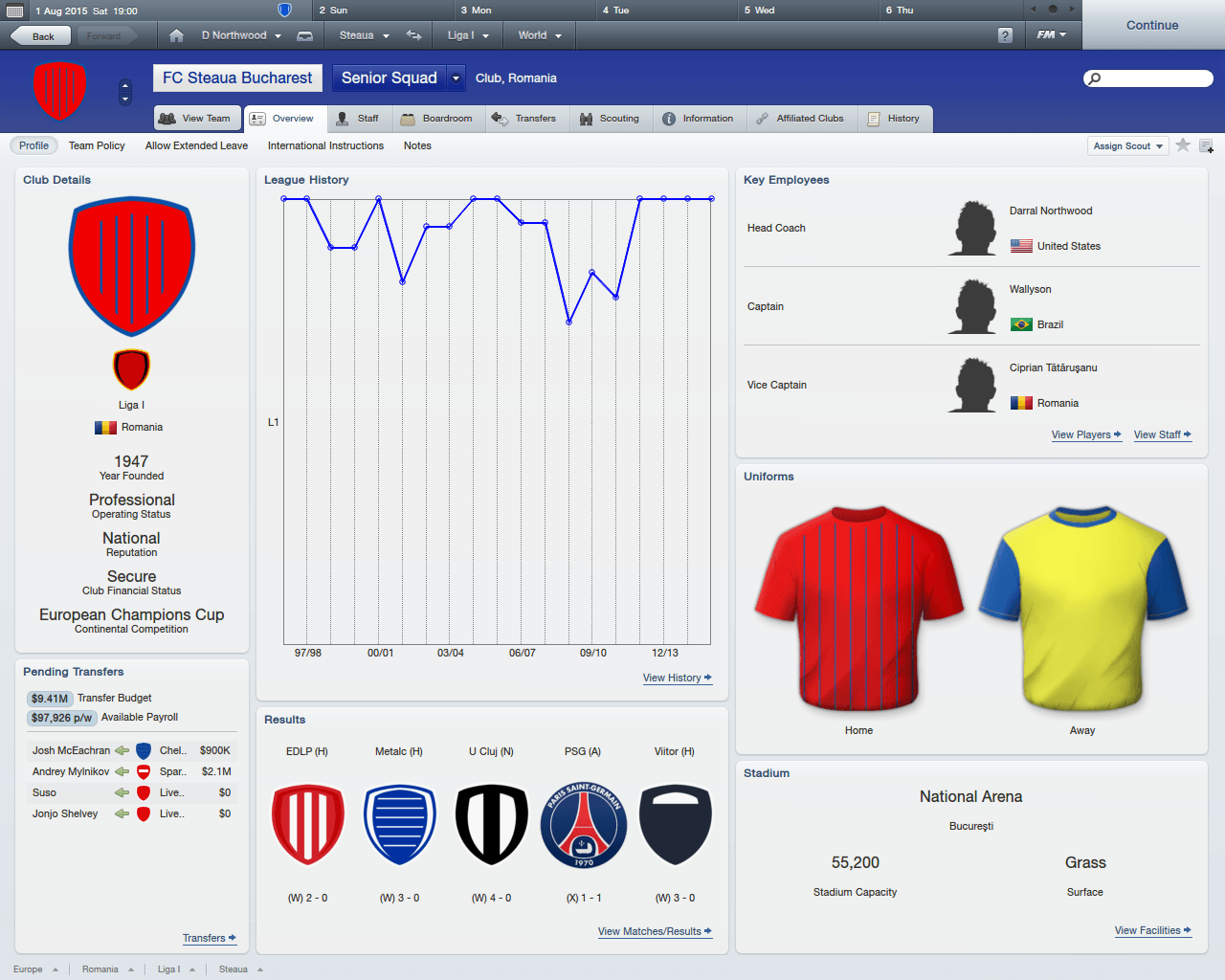 Here you can see the full list of the squad for this season. Promising enough? 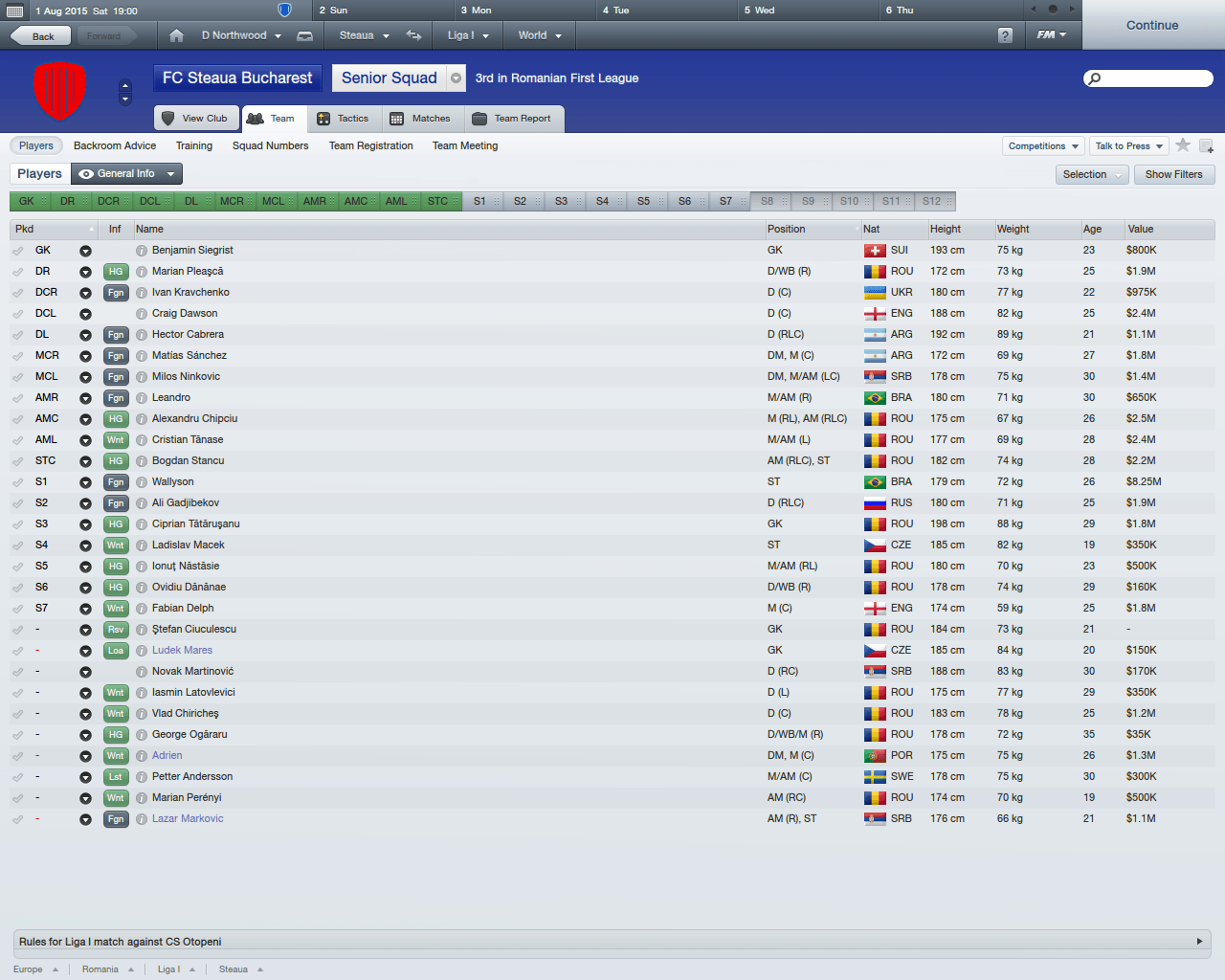 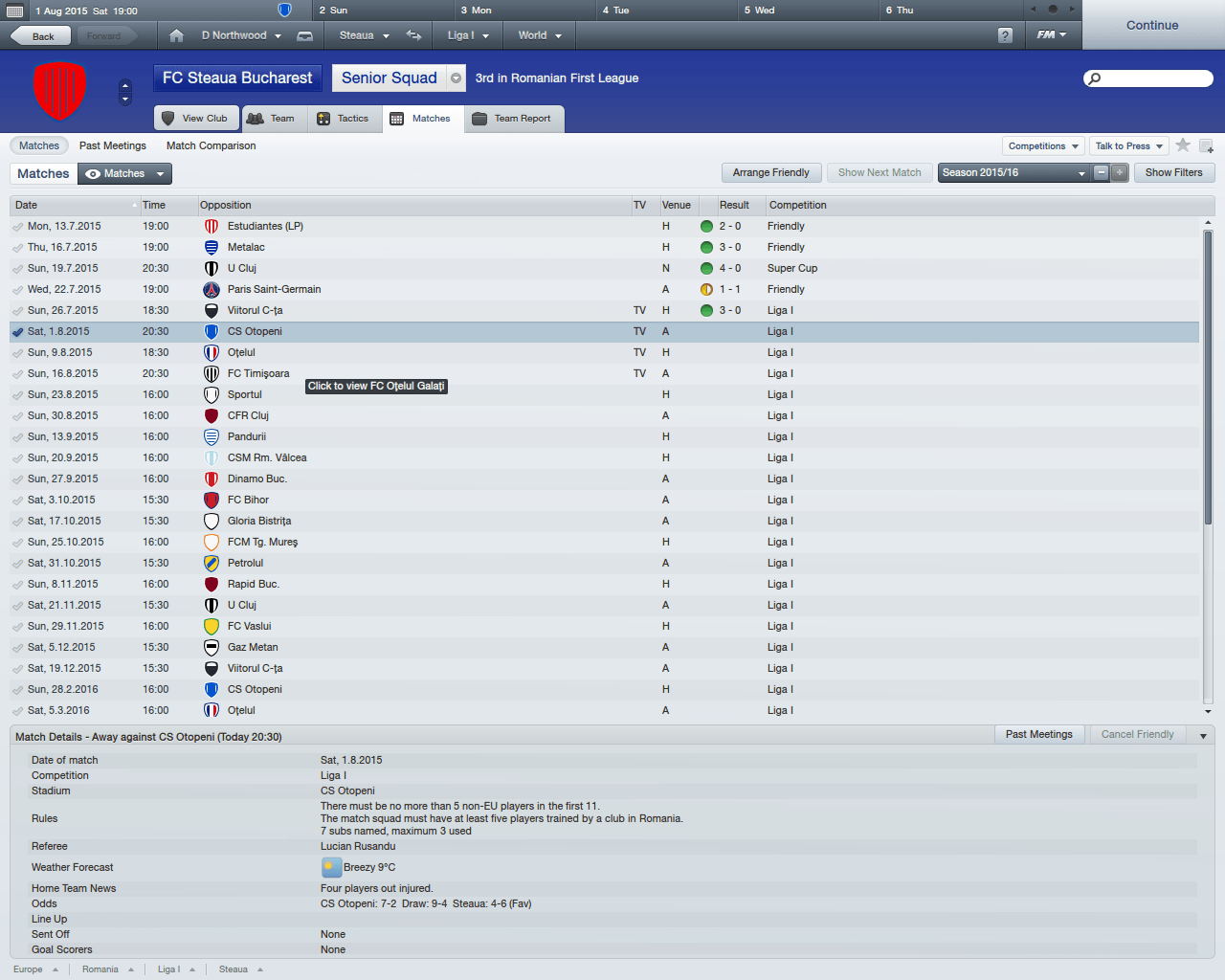 jamstoe
7 years
I am enjoying this. Romania is an interesting decision. Hopefully you can win the Champions League with them!
Login to Quote

crisrko
7 years
Jonjo Shelvey joins Steaua on a loan, with the option to be bought for 2.5 mil at any time during the loan
Login to Quote

crisrko
7 years
After good progress both in league and in Europe, Darral has decided to bring in a very old keeper, who would do just fabulously for the club. Who is it? TIM HOWARD! For his age, his stats remained very good, and you can see my scouts rated him well. 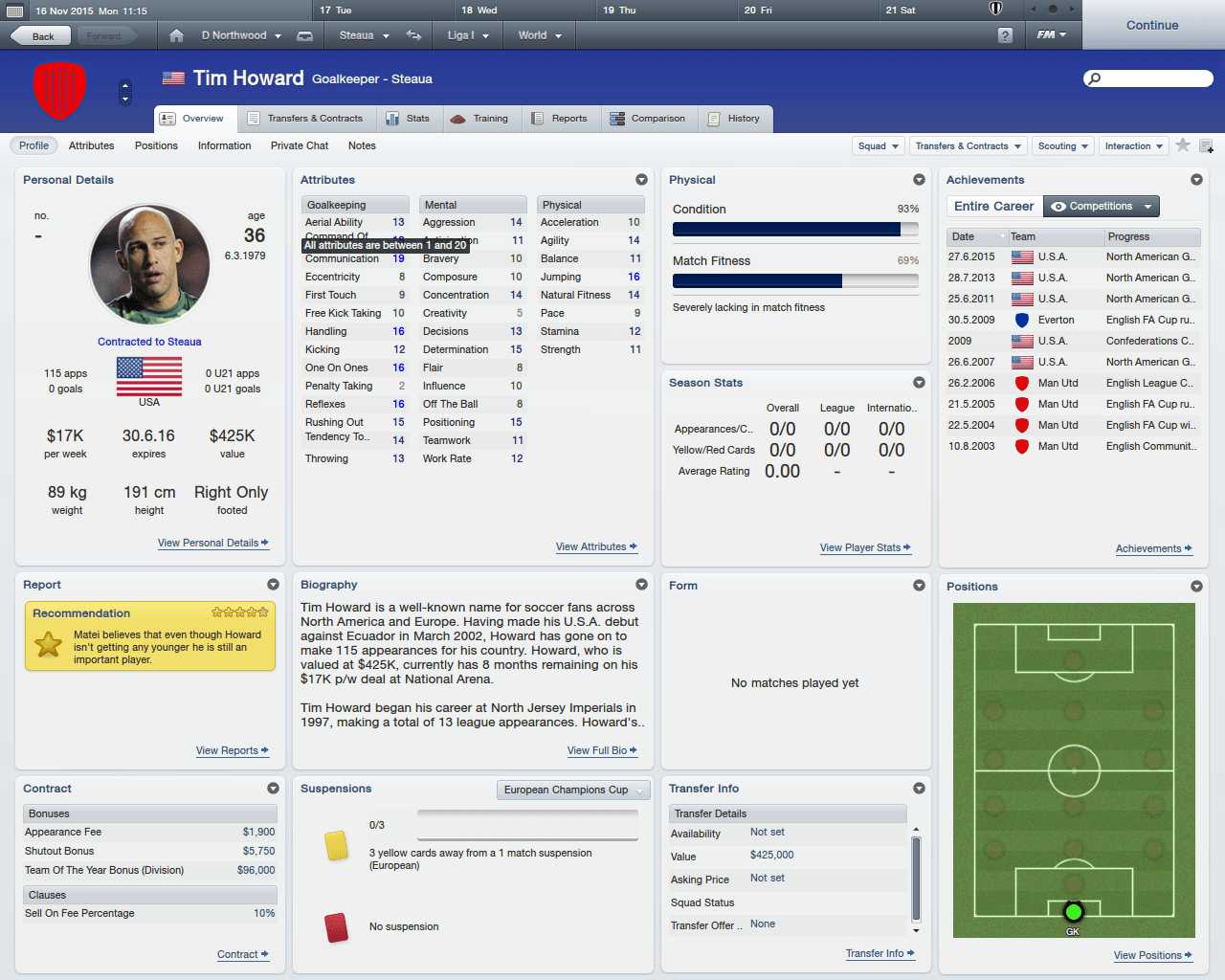 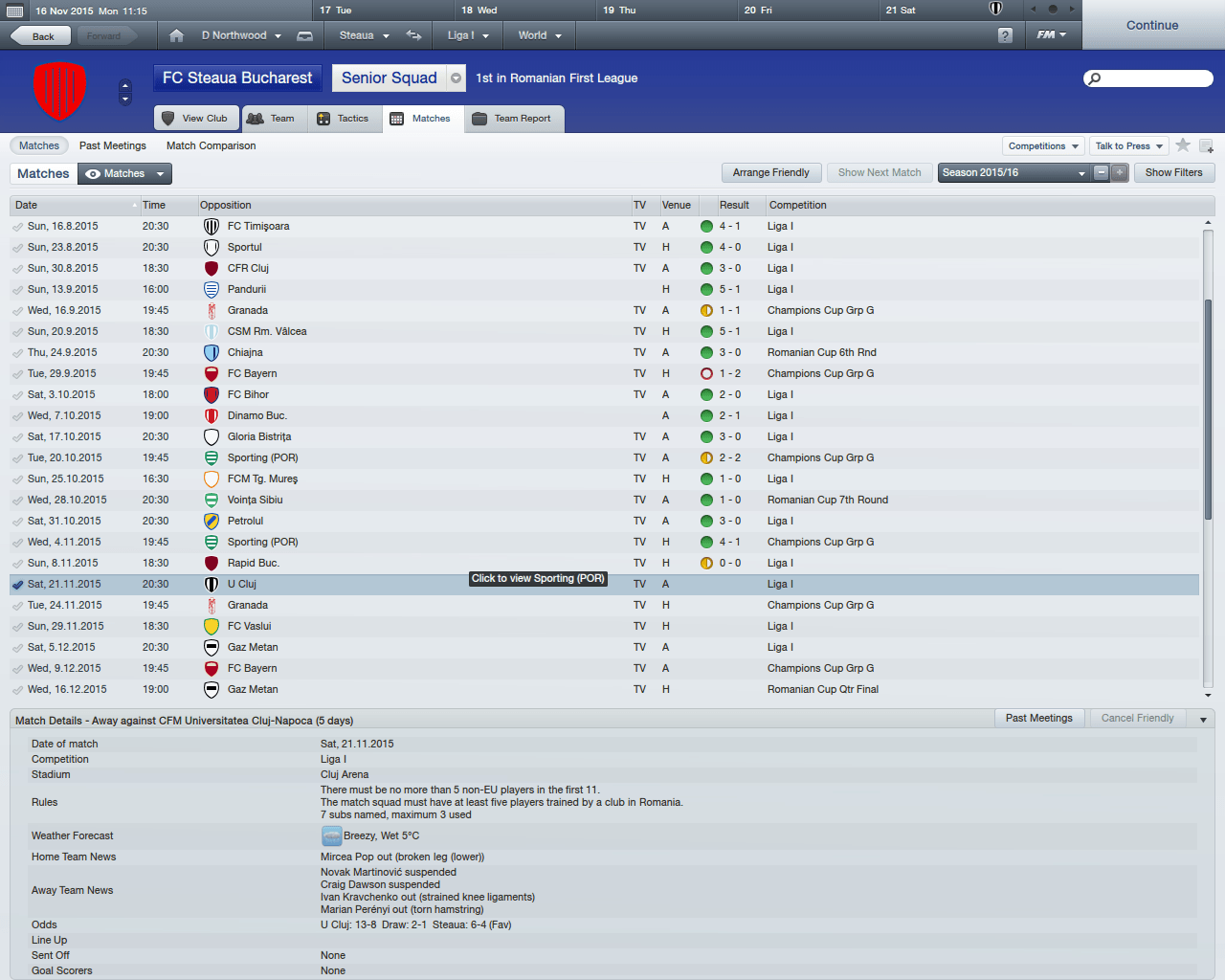 Akash
7 years
Good progress, and what your new signings signal that your reputation has increased - proper Premier League quality! I would suggest concentrating on the Granada match and making sure you progress to the Knockout stages.
Login to Quote