crisrko
7 years
Steaua have drew against FCP in the first knockout, playing the first match in Portugal
Login to Quote

Gurdit
7 years
All the best in the CL!
Login to Quote

crisrko
7 years
Can it get any better? Great goal from Wallyson secures a 4-3 win against FCP on aggregate, and now Steaua have drawn against Man UTD.
First leg was played in Romania, with Wallyson securing a 2-1 win with incisive finishing. Incredible run for the club 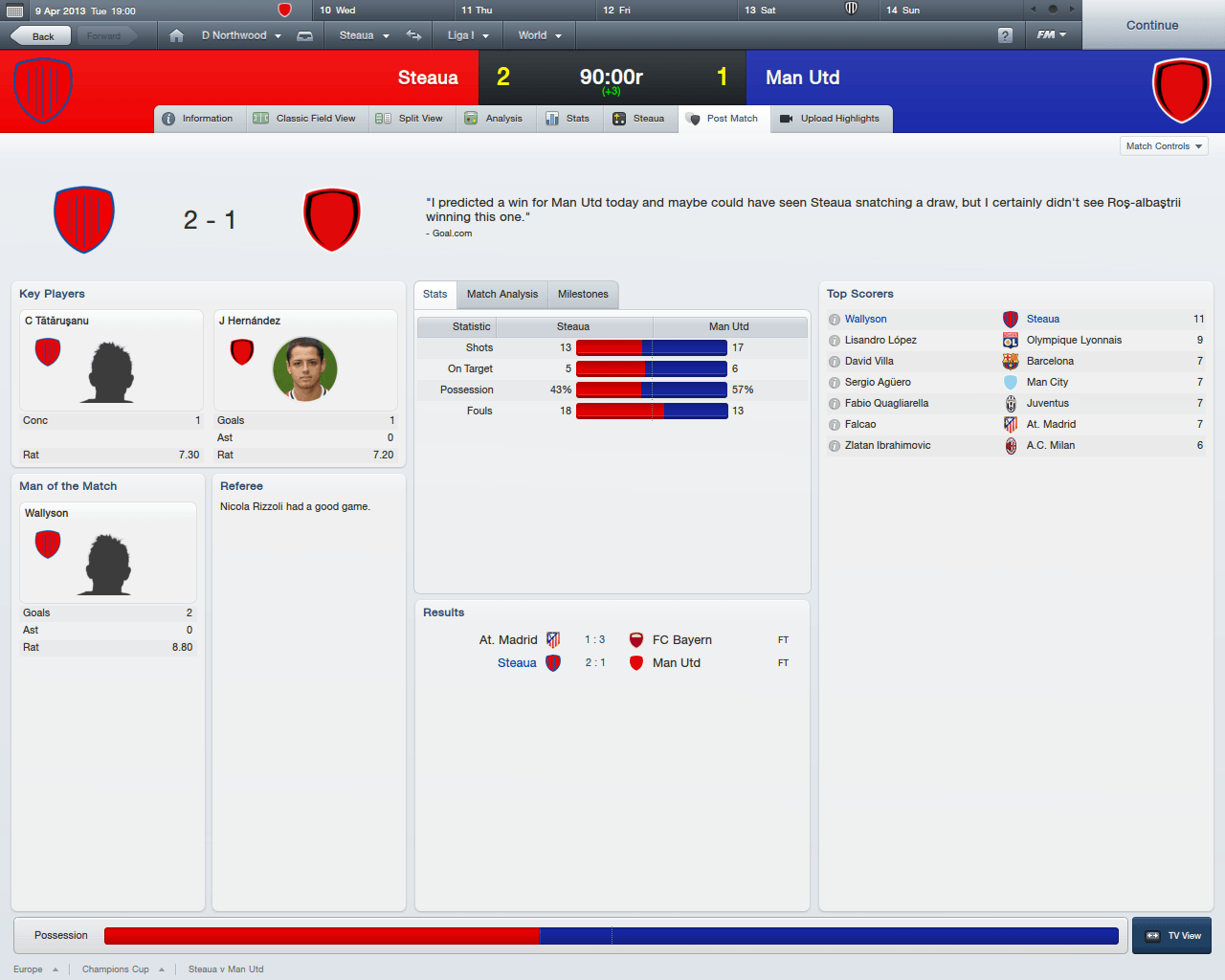 crisrko
7 years
End of the Champions Cup journey, as ManUTD coast to victory winning the match 2-0 at Old Trafford, sealing a 3-2 aggregate win
Login to Quote

crisrko
7 years
Steaua have retained the league! Darral has a 16mil budget to work on and a payroll of 260k p/w. Ninkovic has arrived to the club and Geraldo and Bentley are ready to leave on a free. Steaua are curently negotiating with Maxi Moralez, looking for a new AMC to possibly replace Chipciu, who's injury problems may force Steaua to sell him.

Other than that, ManUTD are linked with the Romanian young head coach, seeing him as SAF's replacement after his retirement. What a summer this is going to be!
Login to Quote

crisrko
7 years
Will continue updating in 1 week, I'm curently away
Login to Quote

crisrko
7 years
2013/2014 season prepared to kick off!
Steua will face Petrolul in the opening day of the season. Below you can see the pre-season friendlies and other things that Steaua have gone through. 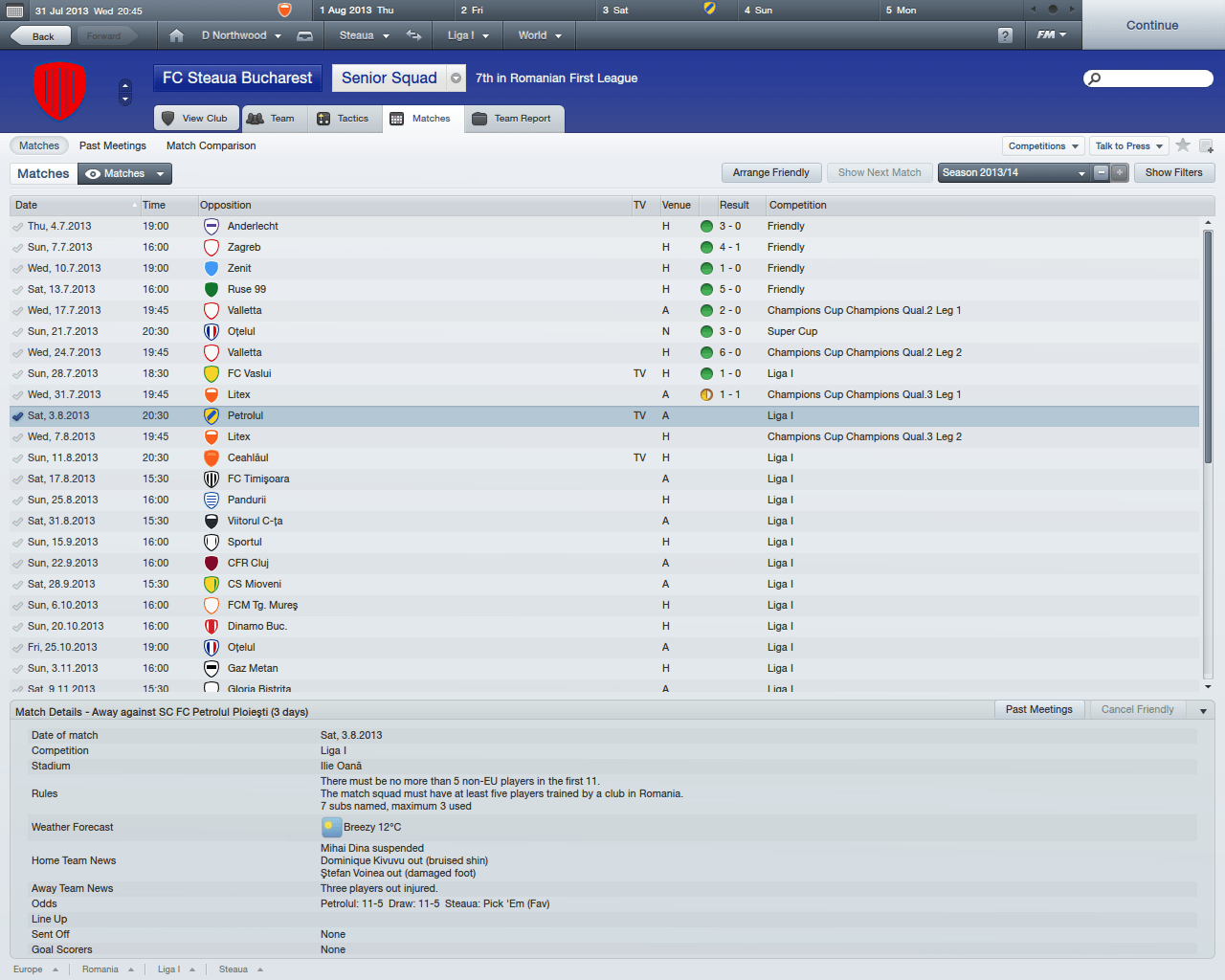 Steaua have done a few signings to strenghten their squad and in-depth of their offensive movement. Experienced international Adrian Mutu returns to romanian football, playing for his young-days club rival, Steaua. Other than that, Steaua snapped up Leandro on a free, which Darral considers a "great" deal for the squad. Due to the fights with N'Doye, Darral has given him the boot, bringing Ormenisan, a young PROMISING goal-keeper in his spot. 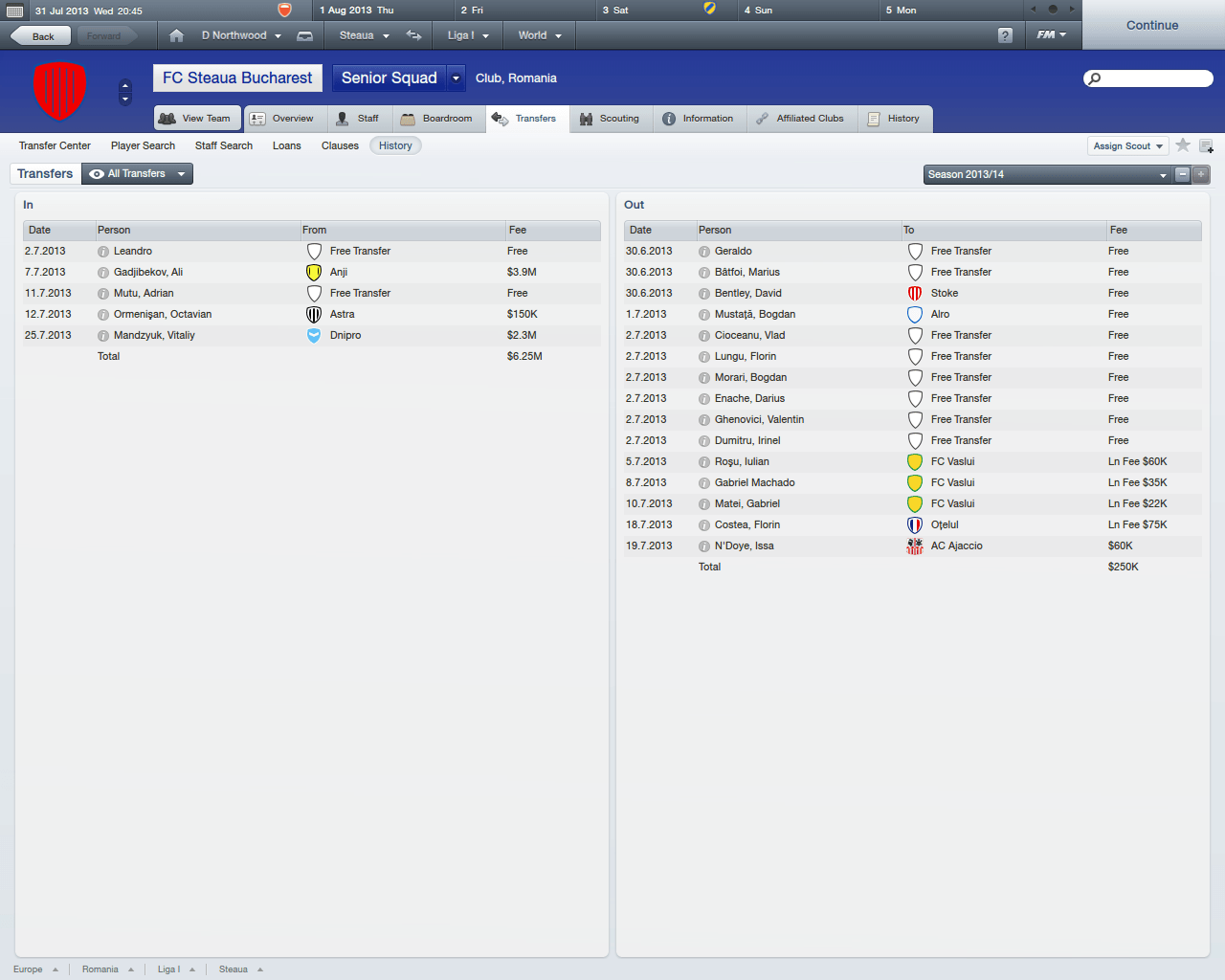 The 2013/2014 season squad has been announced. No more deals will be done until January, where the young manager will see if he shall sign anyone else. 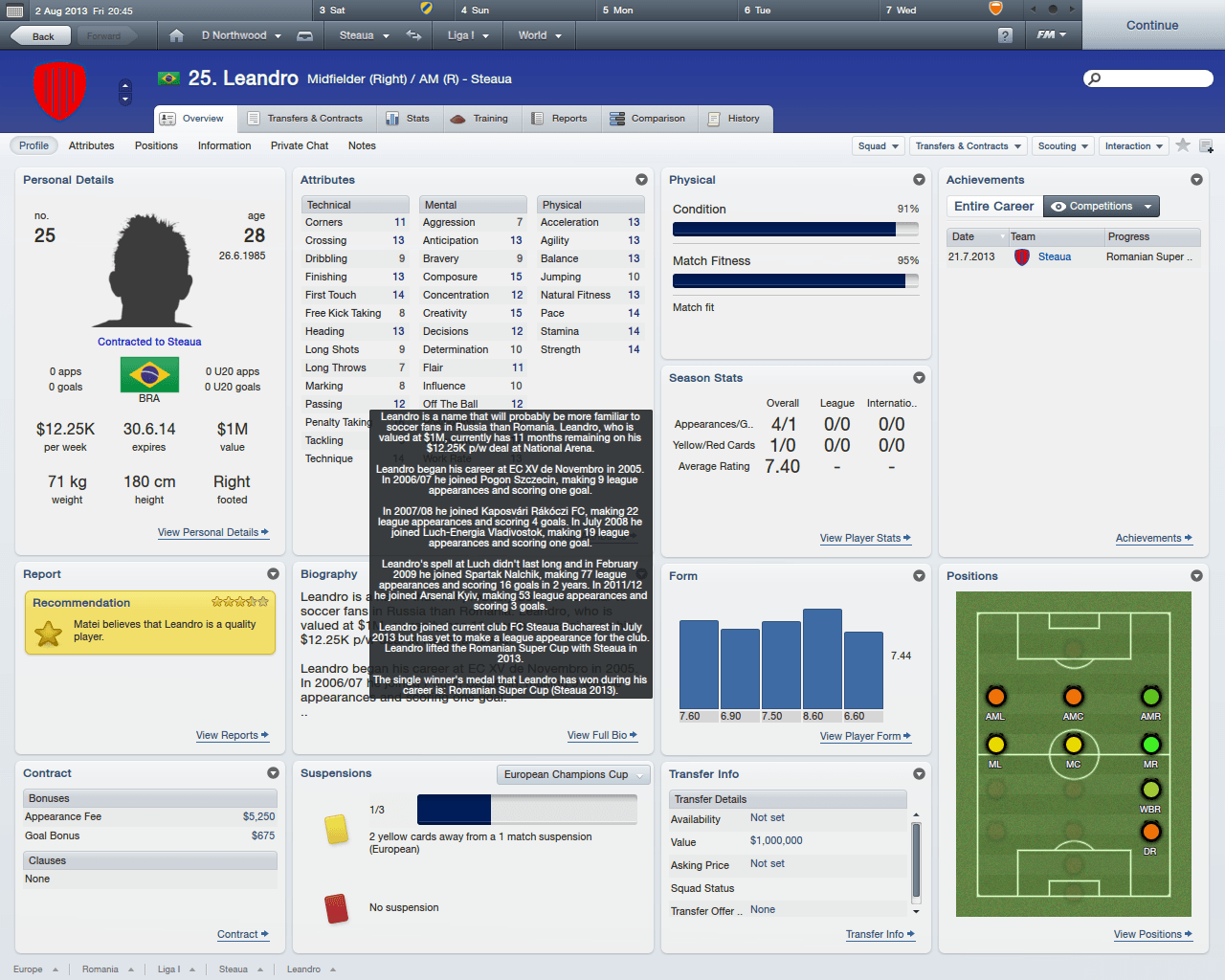 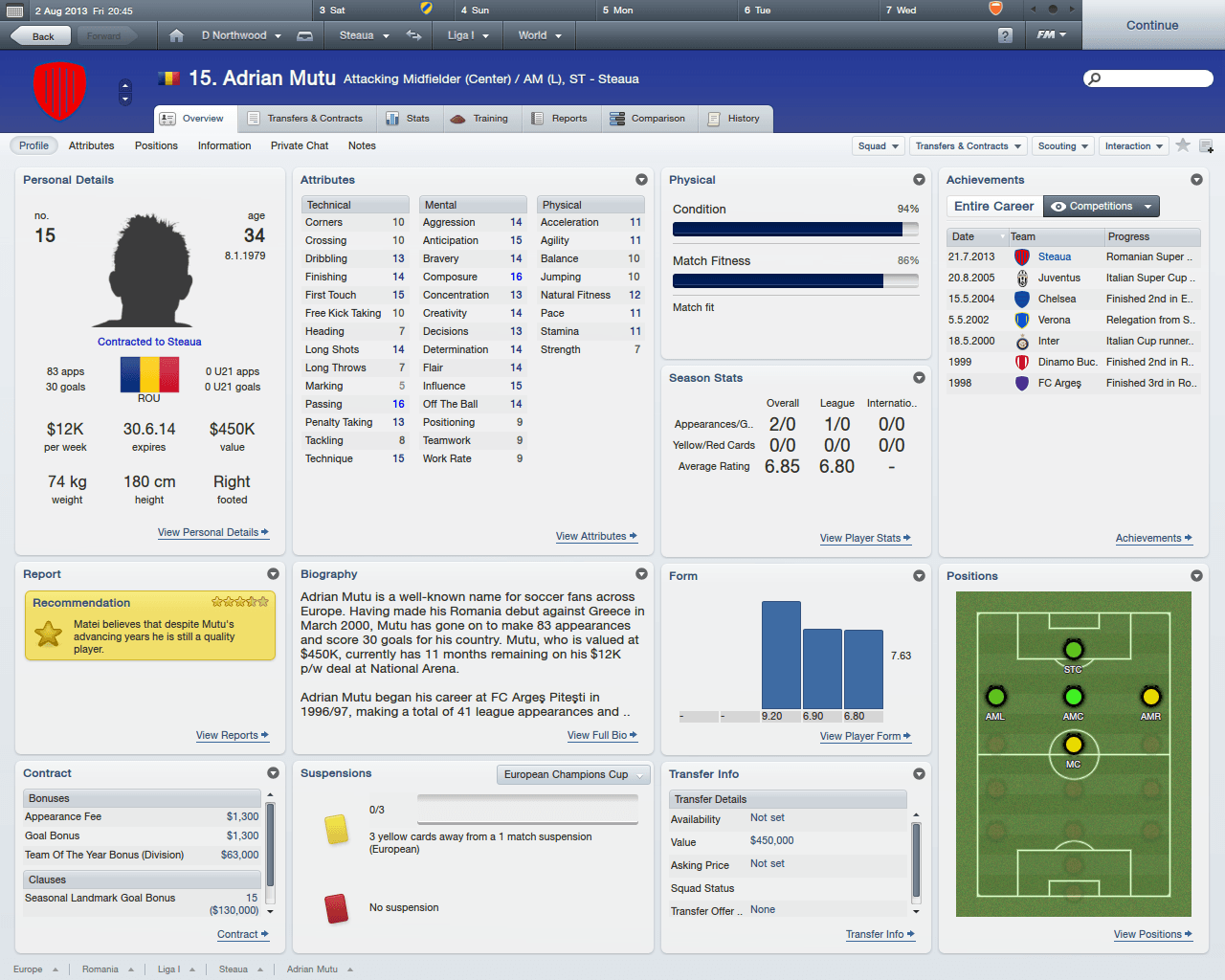 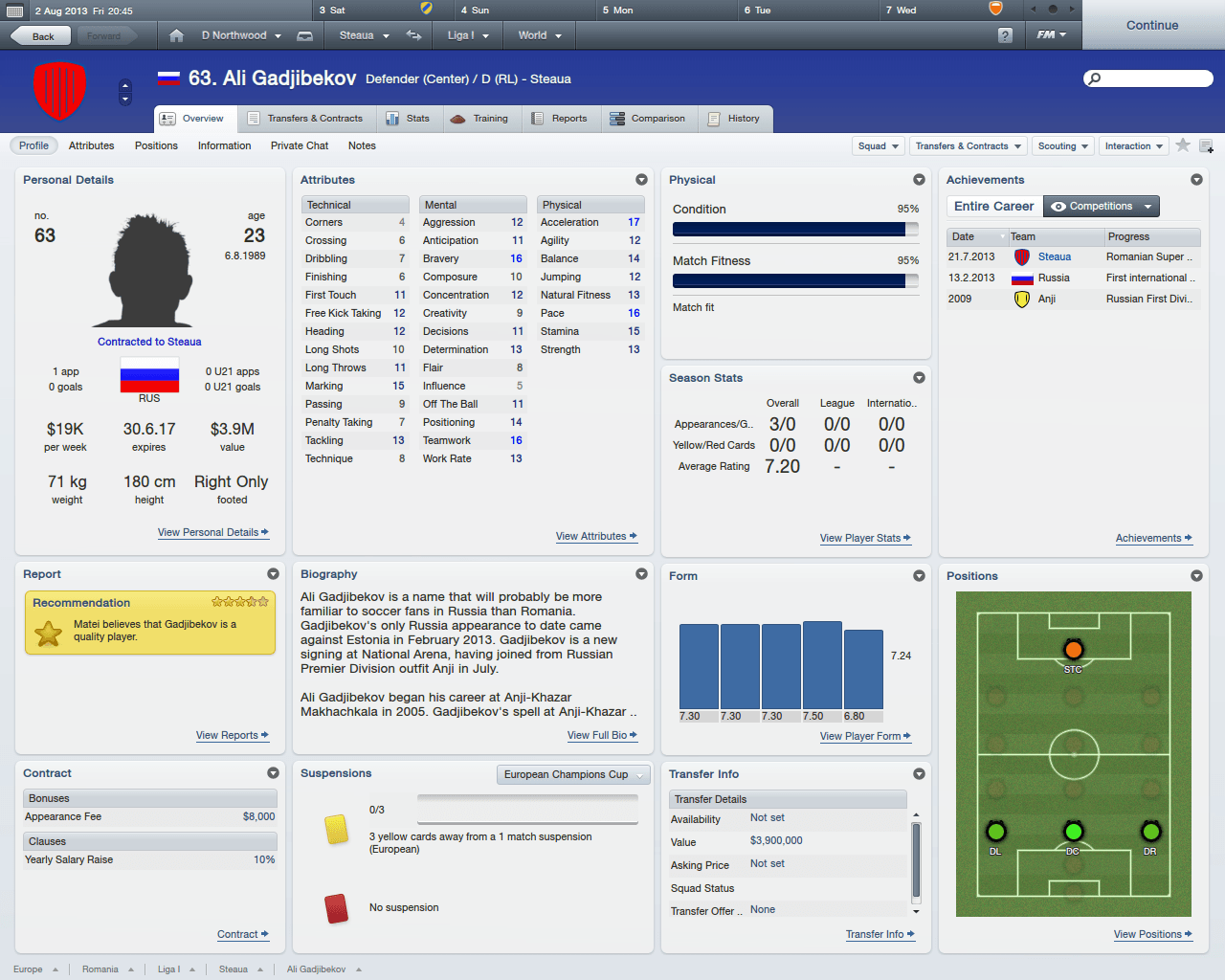 crisrko
7 years
Two great goals from my team against Litex. Chipciu screamer late in the match, and great shot from Markovic. This youngster is progressing well!
http://www.youtube.com/watch?v=vNeJmVK0FSM&feature=plcp

crisrko
7 years
Surprise LATE transfers coming to Steaua. Artem Dzyuba comes on a free to Steaua, on a 17.5k/pw, along with defender Ivan Kravchenkvo. Rumours state that following these transfers, Oribe Peralta and Reijnen may be on their way out. 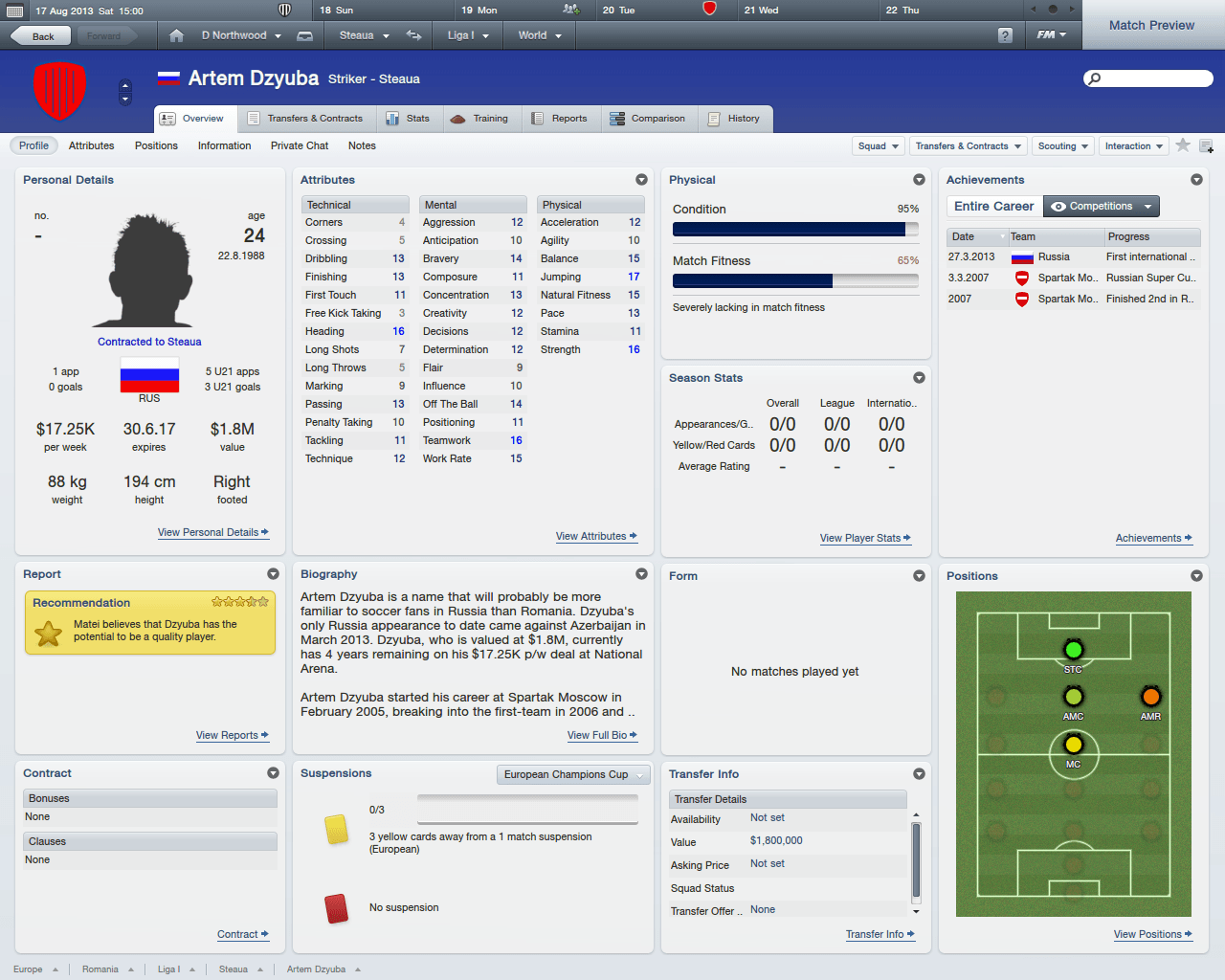 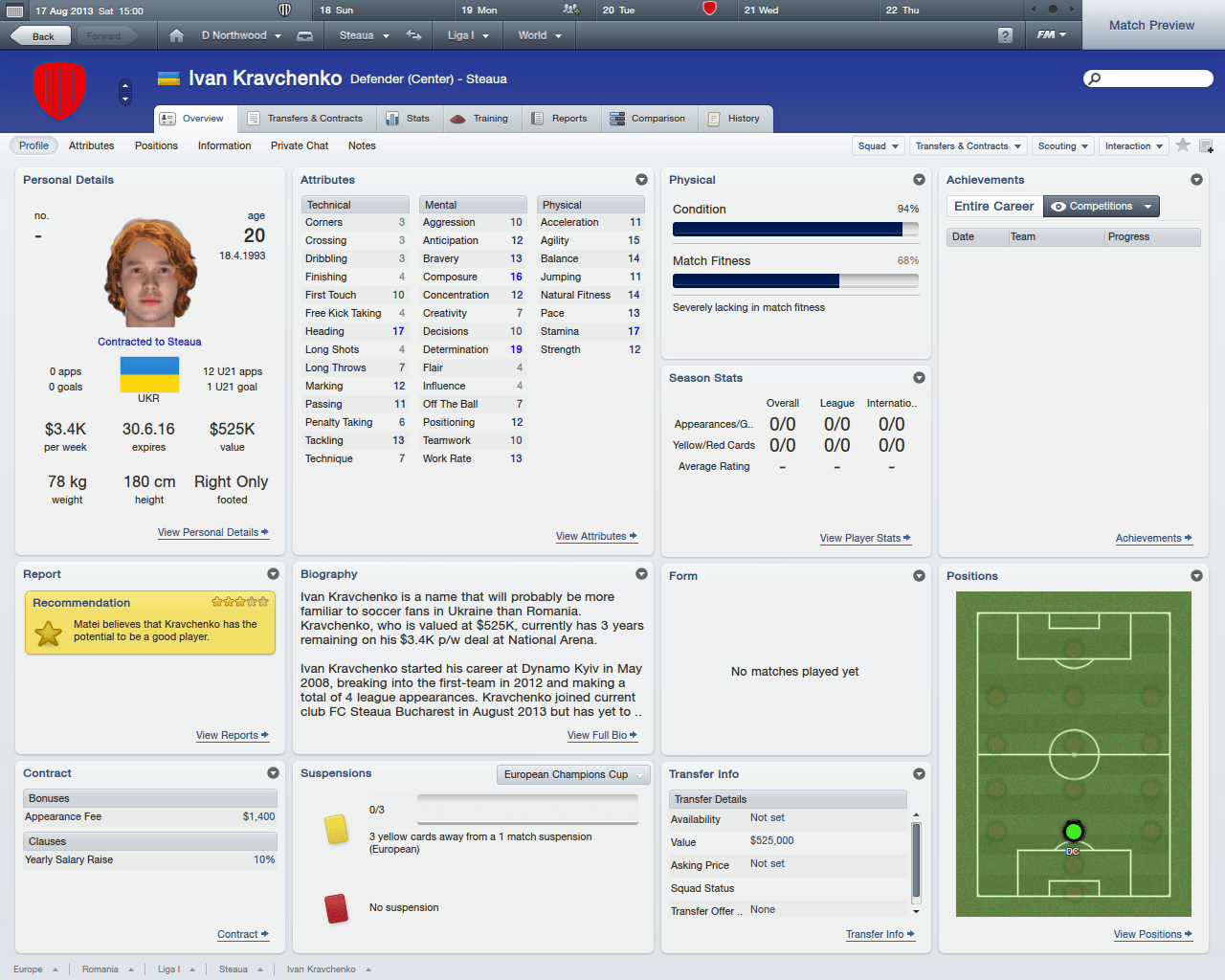 Akash
7 years
Some very good signings, and it is always good to see Adrian Mutu coming back after his shameful Chelsea stint!
I must ask - how are the regens in Romania? How many of them are actually going to move to England or Spain?
Login to Quote

crisrko
7 years
They are pretty bad tbh, very few go to England or Spain, close to none :S
Login to Quote

crisrko
7 years
The season continues as Steaua do very well both in league and in Europe. Wallyson just ended his goal drought in the 83rd minute match against Valencia, scoring the first equalizer, with youngster Kranvchenko proving worth his payroll, saving our butts against Valencia, and scoring 4 goals out of 5 matches. Markovic continues to impress while Oribe Peralta shows he's past his prime, failing to find the net and pass the 6.90 rating. The Steaua manager is now looking to find a new club for Peralta 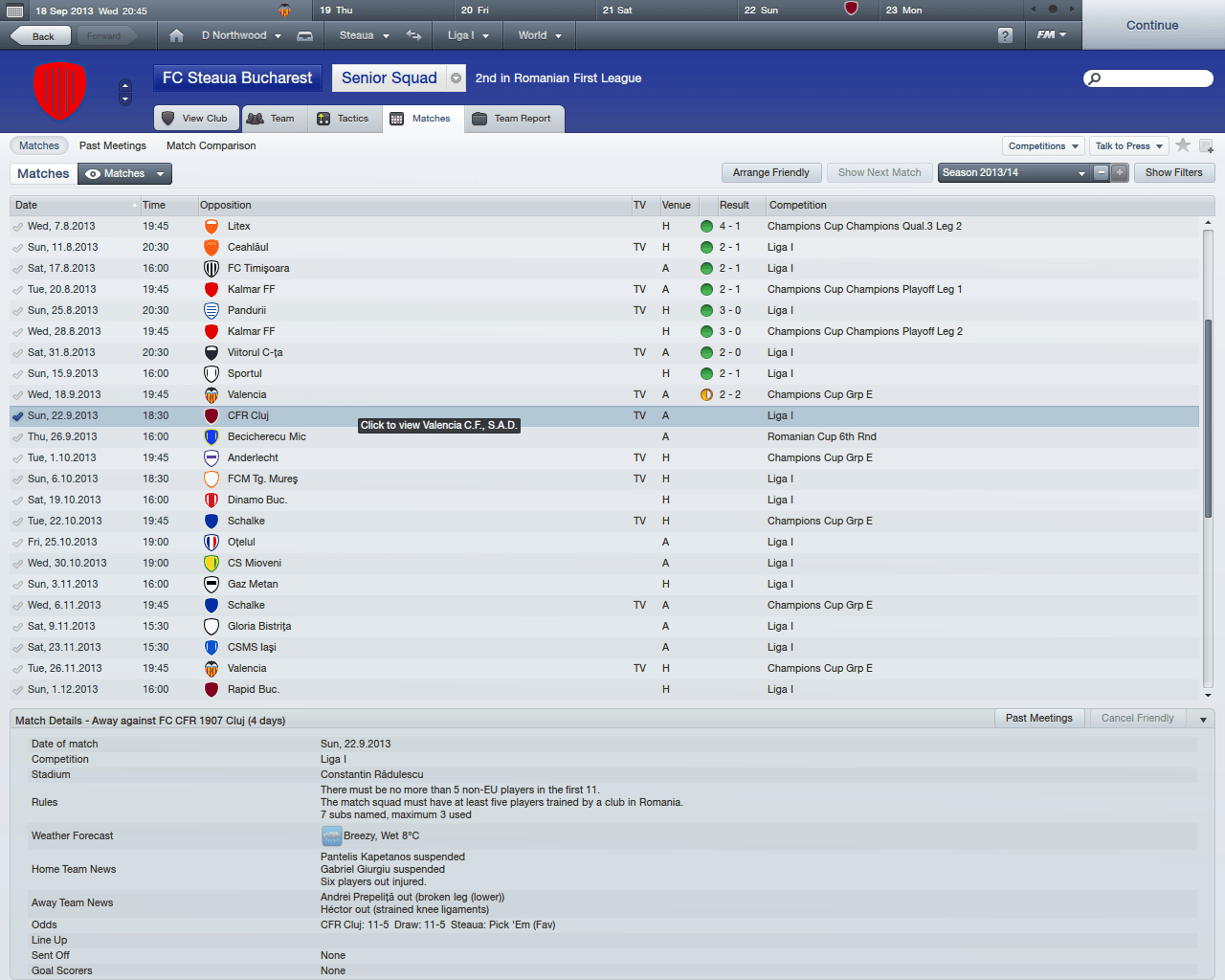 crisrko
7 years
Question to you readers, would it be wise to encourage Markovic in taking overhead kicks?!
Login to Quote