Winger Victor Moses is starting to loose his position in the team, Northwood said in a press conference earlier today: "Well, Moses is a great player, but lately his performances have began decreasing drastically. I will give him two more chances to prove himself, as his performances aren't guaranteeing him a position in my squad. We're a Champions Cup Finalists squad, not a mid-table team. Moses will have to understand this is not Wigan, its Manchester United." Tough hit Moses has taken, and if he won't progress, Northwood said he already lined up an enquiry for the romanian winger, Gabriel Torje. 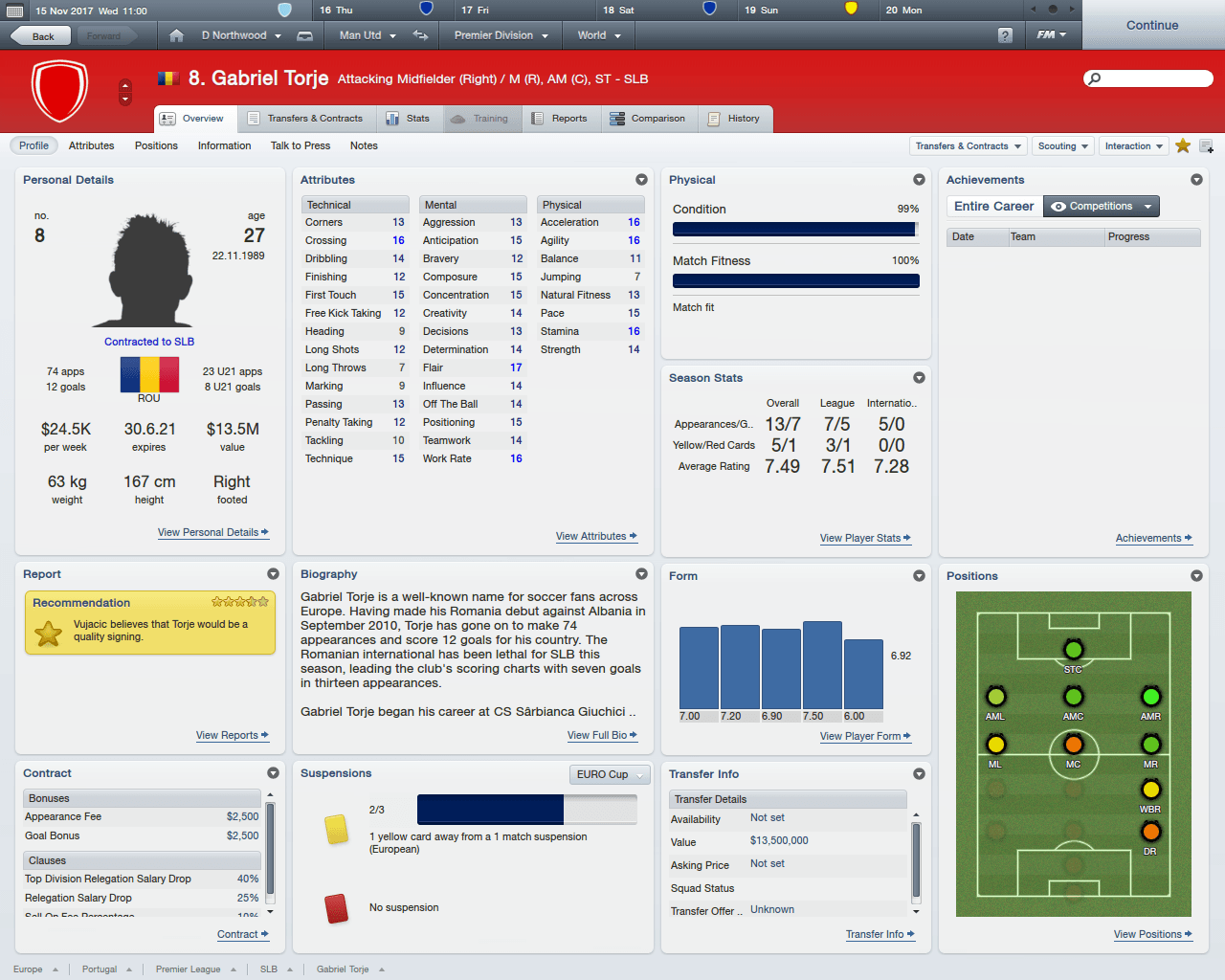 Here we have a paper showing my squad for this season, including how many goals each player has scored till now. You can see Rooney, Leandro, Nastevski, Hazard are the best scoarers till now. Welbeck hasn't picked up form yet, and his position is under danger since we have alot of good youth coming in, and Nastevski and Rooney being great strikers themselves, curently above his level. 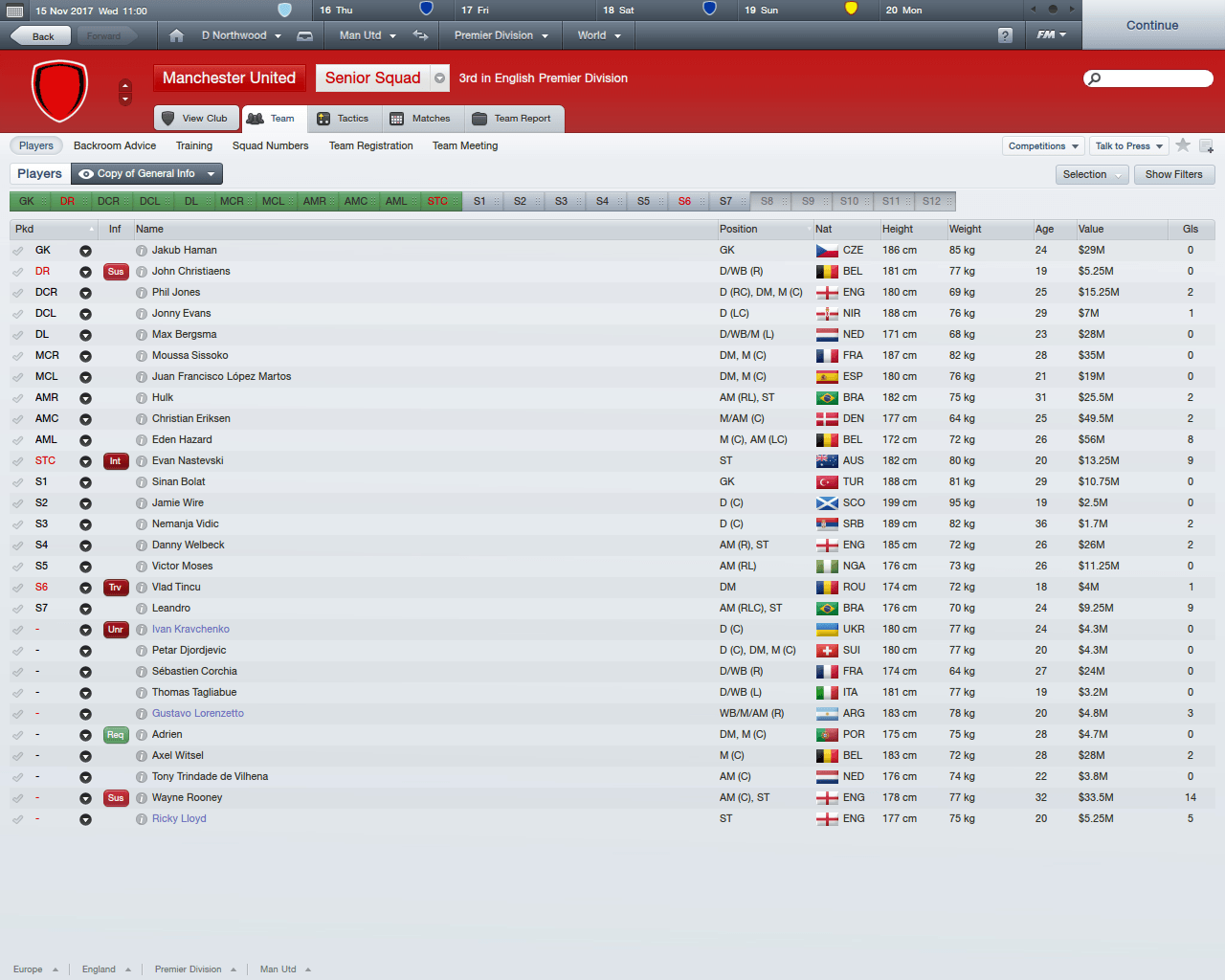 Now, so you can understand how this works, I will give a handmade status of assits and goals.

I here gave the list for all goals in all matches, but Rooney was played only in the league, as he's my league striker. Nastevski is my first choice for CL, while Welbeck is first choice in FA and LC, but he underperforms and will be replaced with another HG striker soon enough.


Match evolution and results can be seen here. 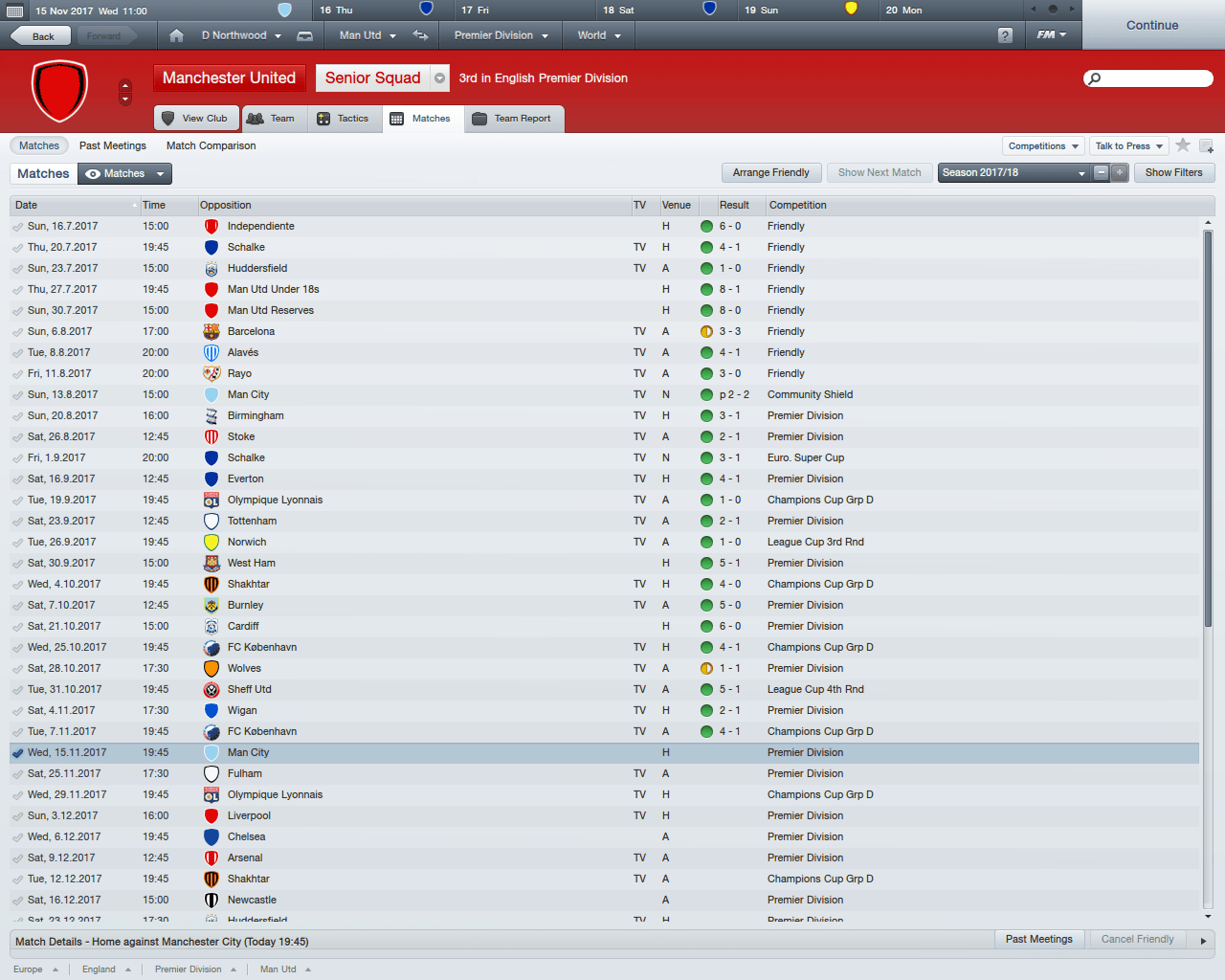 Other talks : ManCity's Mourinho was sacked after an awful display in the league, as they stand 14th in the league right now. His spot was taken by Carlo Ancelotti. Since his arrival, they have went up to 9th.
At Madrid has sacked their manager, and brought in Mourinho, who will now face his old club at their very own Madrigal Rival team.

League Stands are going great for us, we're 3rd with 25 points out of nine matches. First place are Arsenal with 31 points out of 11 matches, and second are Tottenham with 30 points out of 12 matches, so I can say we're first at the moment if we consider the clash against ManCity won and the next two.

Young watch across borders. I have sent many youngsters across to my feeder clubs. Most of them are offensive players and all of them are performing.
A striker an a left mid are playing for FC Twente. The striker has 7 goals in 12 matches for them, and the midfielder has 2 goals in 16 matches.
Two strikers are also playing for Spartak Moscow, one of them having 6 goals in 8 matches, and the other one 4 goals in 9 matches. The other GK who is abit older and one of my DM/MC's sent there are also playing well, so I guess they are going to seal some positions in here.

Sad news for akash mostly, Adrien unfortunately wants out, as he has problems getting in the first team, due to the large quality in my midfield, I just can't blend him in, all my players perform. Manchester United is probably too high for him, and now I'm trying to find a club for him since I don't want to destroy a player I love.
Login to Quote

The FM Rookie
7 years
Brilliant story so far! A nice post and your players have scored a good few.
Login to Quote

crisrko
7 years
Rampapapam. Its time for the update, since we have the one-hour new website update! Yay!

Regarding the league, I am curently standing tall in third place with 34 points out of 12 matches. Tottenham are second with 37 points out of 16 matches and Arsenal are first with 40 points out of 14 matches. So I guess I'm a boss! I'll have to fight Arsenal for the title.
Rooney is the curent top goalscoarer with 19 goals in 12 matches, which is quite alot, and I just love his performances even though I don't like him so much in rela life.

Welbeck will have to say bye, as he's getting sold to Valencia for 36 milions, and will arrive there in January. He failed to find form in half a season, so its over for him. I don't want to keep Nastevski out who has good performances just to play Welbeck that can't score for shizzle. The ammount I'm sellng him for is great, considering the fact his worth went down from 30 milions to 22 milions.

Adrien also is going to leave, but for 1.5 milions and to Birmingham.
In place of Welbeck, I will bring to the first team a youngster, Kai Brady, who is performing well and I say he deserves a chance, after 2 loan spells to some affiliates. 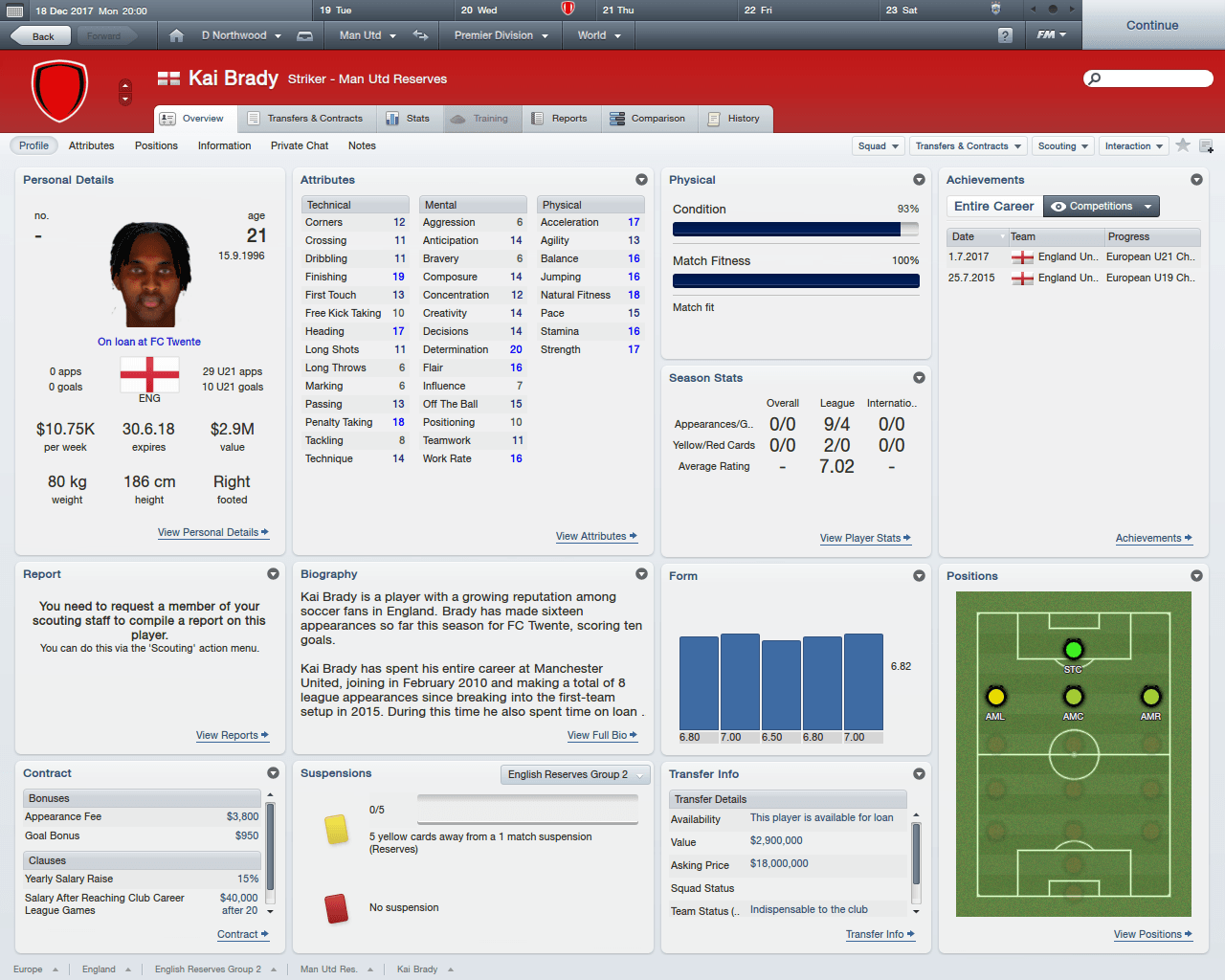 We are performing great everywhere! We have retained the Club World Championship, in an infratic win against River, defeating them 5-1. We are performing fabulously and with our curent form, we should be able to defeat Arsenal, who we will face in two days!
Login to Quote

crisrko
7 years
First January, and we go all through into a new year! A new year of hope, a new year of Champions League. We will face Inter Milano, bam bam bam.
In the League we have 3 points behind Arsenal and two games in hand. Tottenham are leading at the moement after beating Arsenal 3-0 at Perryman Arena, but we got 6 points behind them with 3 matches behind, so I am not worrying! Unless we'll make big mistakes. Curently, we have quite a ton of injuries, which is not really good for me, but I am going to use the players that had performed at my affiliates and give them a chance at the team. Only youngsters!

The awards can be seen below.

Rooney is leading the BPL goalscoring area, with 23 goals, now that really is something! But Rooney is Rooney, so he's a boss!
Nastevski is also being phenomenal himself, 15 goals in 16 matches, which I say is good for a young player performing from Asian leagues (tottaly different league level)
Login to Quote

crisrko
7 years
Now this is the January talk! Let new signings come-... or not? Well, I honestly don't see any reason to spend money this season due to the fact there is no regen who caught my eye, or just because my team is extremely powerful. I am deciding to opt for the talent I already have in my ranks, like Kai Brady who is shown above, like Hans Valk, like Jamie Wire(I wish you a speedy recovery my man. Torn Calf Muscles are awful). Now, Hands Valk and Kai Brady were always in my youth, just that I was sending them to affiliates for some experience. Now with this injury crysis, I decided to bring those two back, and show the quality of ManUTD's youngins.

Below is Bruma, a speedy portuguese, but I think thats all he got. I'm thinking he could provide that Portgueso-Braziliance that Hulk got, but he's still young, and I can snap him up on a free.

Kai Brady... you got him above in the post showed four days ago! Come on!

[/spoiler]
And the boy I got from Dinamo, Steaua's most hated rivals, reppin' that ROMANIAN flag...
VLAD TINCU!
[spoiler]

And the curent league standing is...

[/spoiler]
For people who wonder how Rooney, Hazard and my boys are doing stats wise, in a direct comparison in the league, see it below.
[spoiler]
Login to Quote