crisrko
8 years
I can't say I support Man United, I prefer Man City and Spurs IRL, even though I'm not from England, dunno why, I just like them.

I tried to give it a shot, and it was a great move for me in this story
Login to Quote

crisrko
7 years
January 27th is the day Man United have reached the League Cup final once again after defeating Wigan 3-0 at home, and 4-1 on aggregate, after a draw at Wigan's stadium. The team is excited about the final and will do everything to ensure they get a new trophy.
"Mr Northwood, how is life going for you at Man United? There is controversy about the team, if they're good, or if they're over-achieving, thanks to your tactics."
"Well, what can I say. Life is going good, we're playing very well and we won two trophies already, Club World Championship and the Community Shield. We're looking at the League Cup, Barclays Premier and Champions League, but we'll see. I doubt we're over-achieving, we're the second best club in the -WORLD- at the moment, so yes."
"I see. In a few days you will face Bayern Munchen, clashing against your old player, Lazar Markovic, a phenomenal youngster that under your guidence at Steaua, and the chance you gave him to try his luck at Copenhagen, meant the future for him. He made it to Bayern, a phenomenal force in Europe."
"Indeed, but its not my guidence, it was the talent he posessed and the hardwork really paid off. He's a gem of a player, and when Hulk will get past his peak, I know who I'm giving a call" said Northwood with a smile on his face. 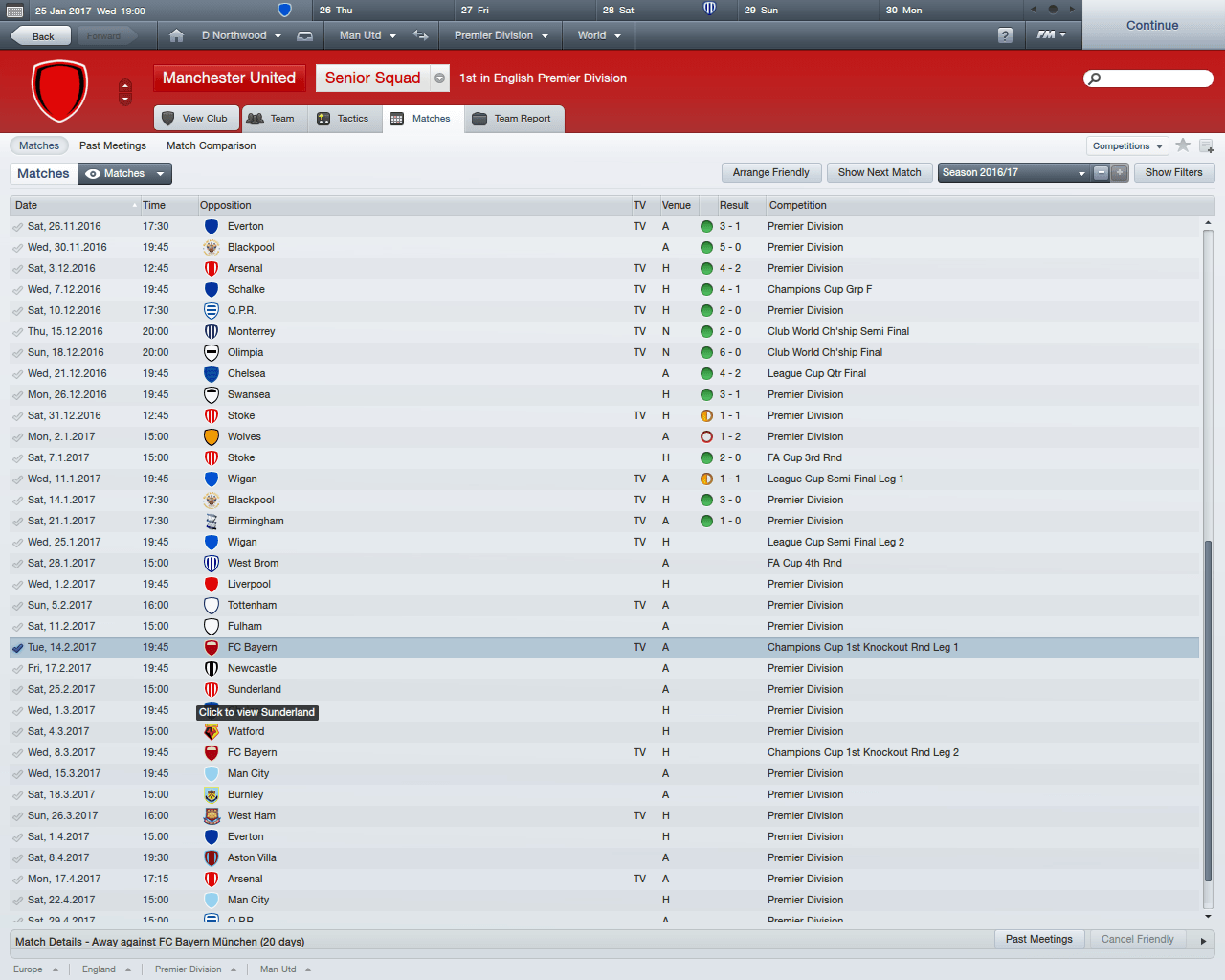 crisrko
7 years
We continue battling with Manchester City for the league title, its a tight battle, a battle of masterminds. Northwood and Jose "The Special One" Mourinho.
Progress has continued being phenomenal, Welbeck ranking 31 goals and Rooney ranking 32 goals, we've had an AMAZING strike force, backed up by Witsel, Hazard, Moses, Hulk, Eriksen, Vilhena and Pogba. 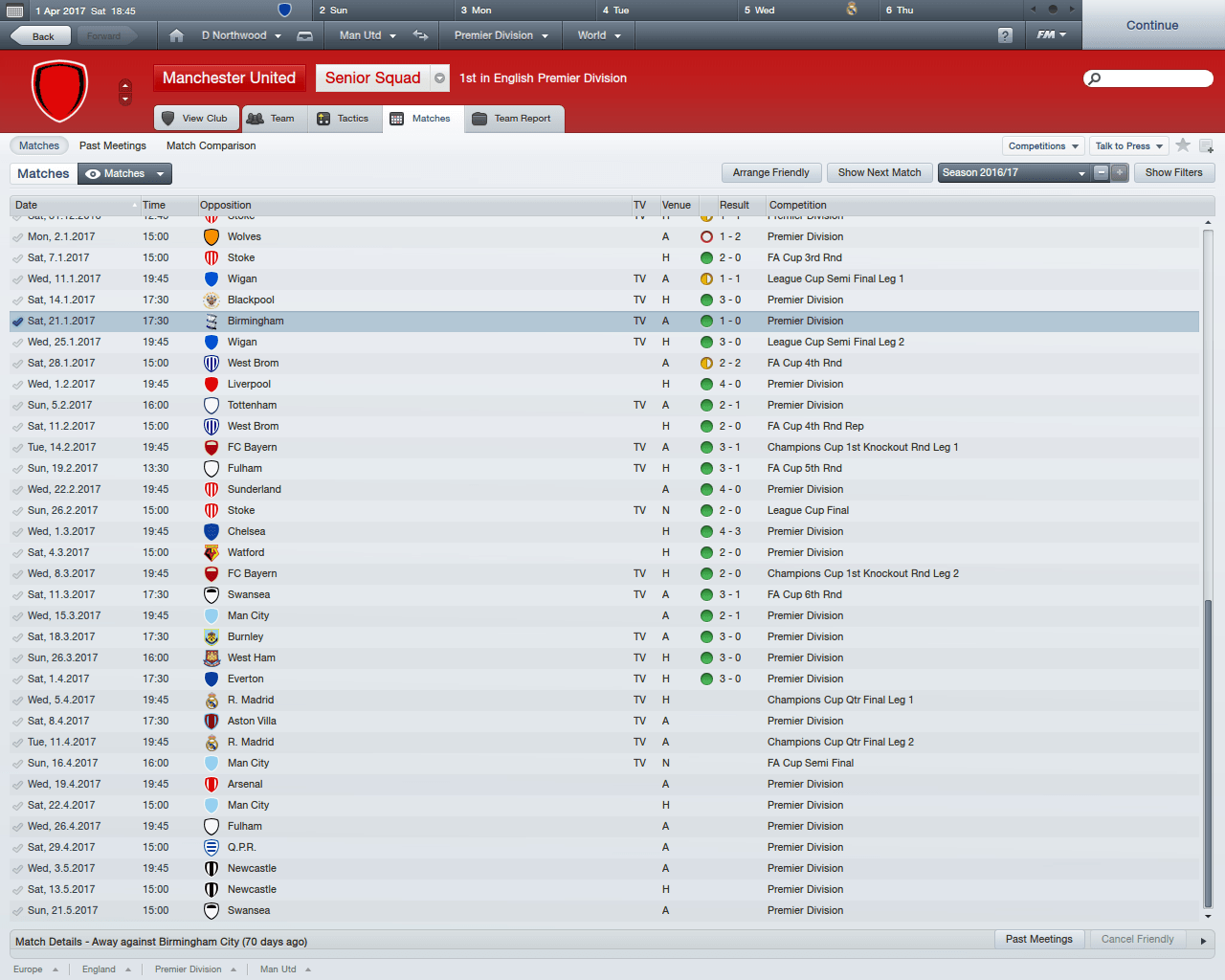 This is the BPL status, we must not make mistakes, or we might loose the title soon enough. 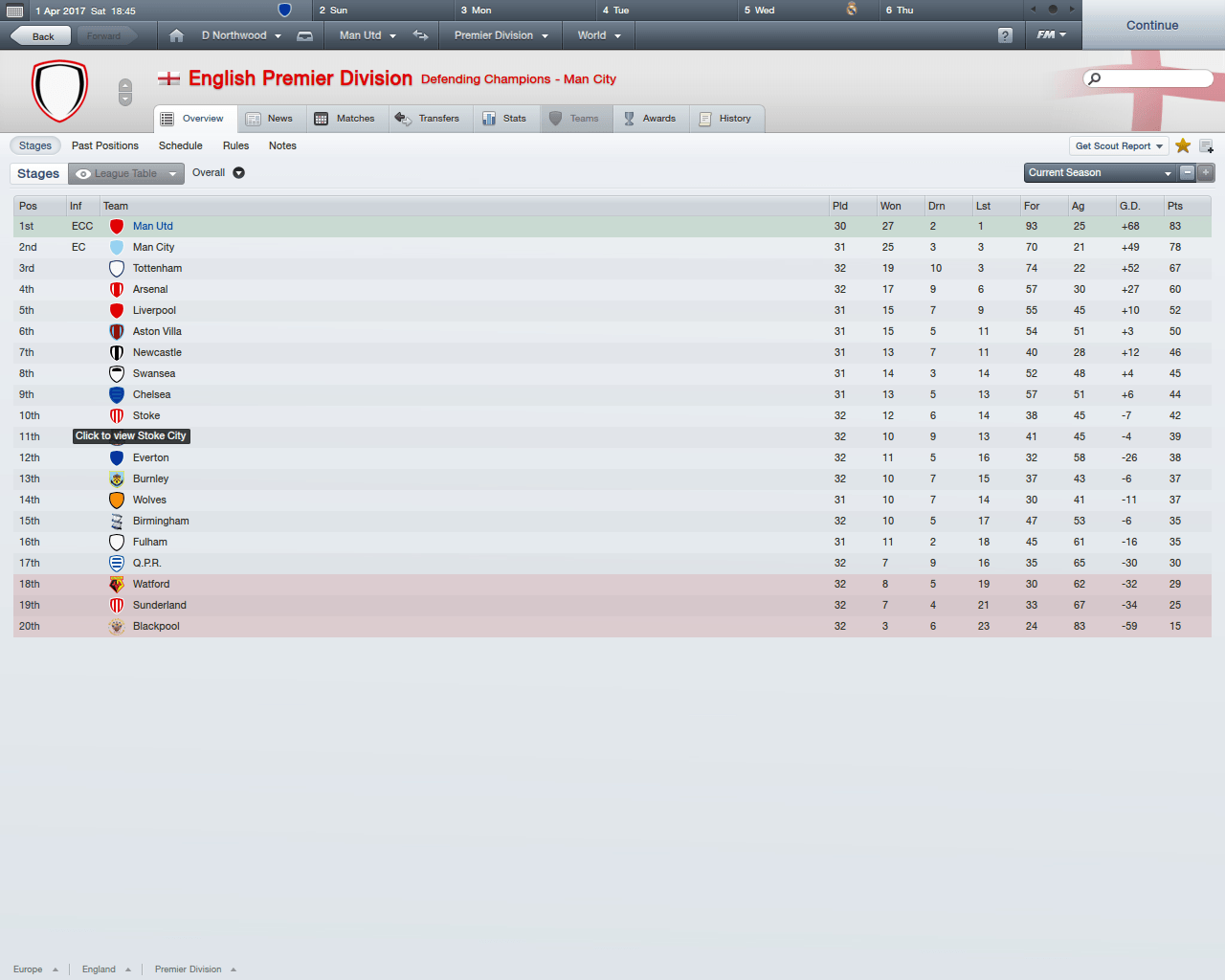 A press-conference dedicated to the fans was called by the Manchester United board, to ask oppinions about the curent shape of the club, the transfer targets and so on.
An enthusiastic fan, raised his hand and asked Northwood : "Who are you considering to go for this summer? Will we have any surprises? Are you going to look into bringing Wallyson here too, or you will look at new players?"

Northwood responded calmly, with a smile on his face: "Wallyson will always be a target for me, he was phenomenal at Steaua, and was the top marksman in Europe, ranking 48 goals in all competitions, despite being in a second-tier nation. Other than that, I'm considering looking to bring in Iker Muniain, Adryan and a surprise player".

The next fan raised his hand up, asking him : "How do you feel ahead of the clash against Real Madrid?"
Northwood had a smile on his face again, responding firmly : "It's a big match, but its not an impossible fight. We'll do our best and hopefully get in the semi finals. Their main threat will be Cristiano Ronaldo, as he always is. The clash will be difficult, and if we manage to go through, we will face either Arsenal or Barcelona. Tough road ahead!"
Login to Quote 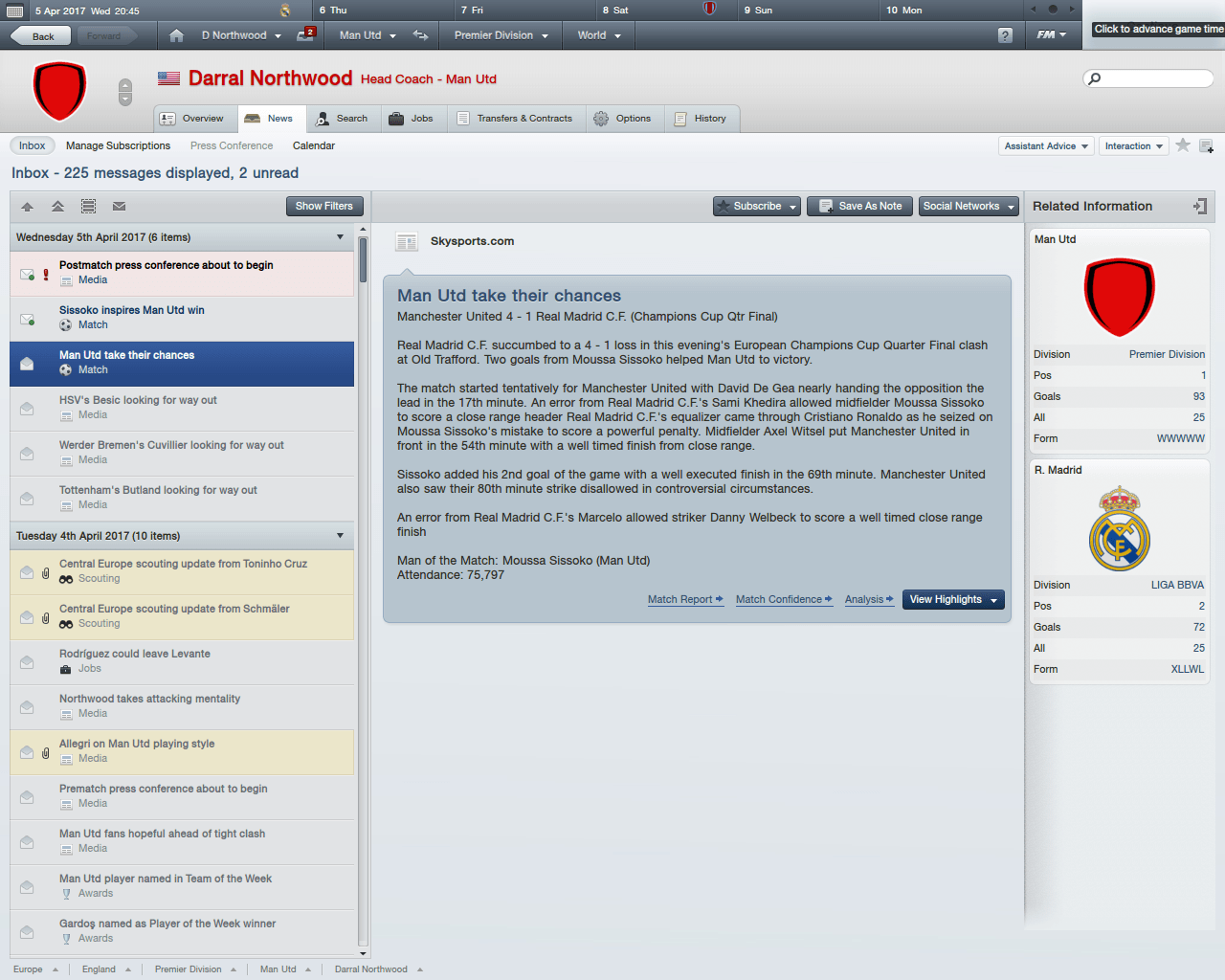 crisrko
7 years
"OLE OLE OLE!" Were the chants heard this night as Man United coast to victory against Inter Milano, sealing and retaining the Champions League cup. Hazard was named the best player and Welbeck the best goalscorer.

Transfer talks are very tense this summer. Bale requested transfer, and ManCity, ManUTD and Bayern battled for his signature, but ManCity won with their ultra high contracts.
Other transfers will go through, which you'll see in the update.
Login to Quote

The FM Rookie
7 years
Congrats on the Champions League win! How are you ranking up in the Hall of Fame?
Login to Quote

crisrko
7 years
The transfer update is finally here. The team has sealed a few great contracts! They are GREAT signings, although I would've loved to seal Bale. ManCity offered 25k more, so he went there, damn money-grabbing bastard, still worth it. Carrick and Evra retired, while Anderson left to Genoa on a contract free, and Rafael demanded a contract cause he won "everything possible" with Manchester United. I said yes since its a good day to bring some youngins off his money. 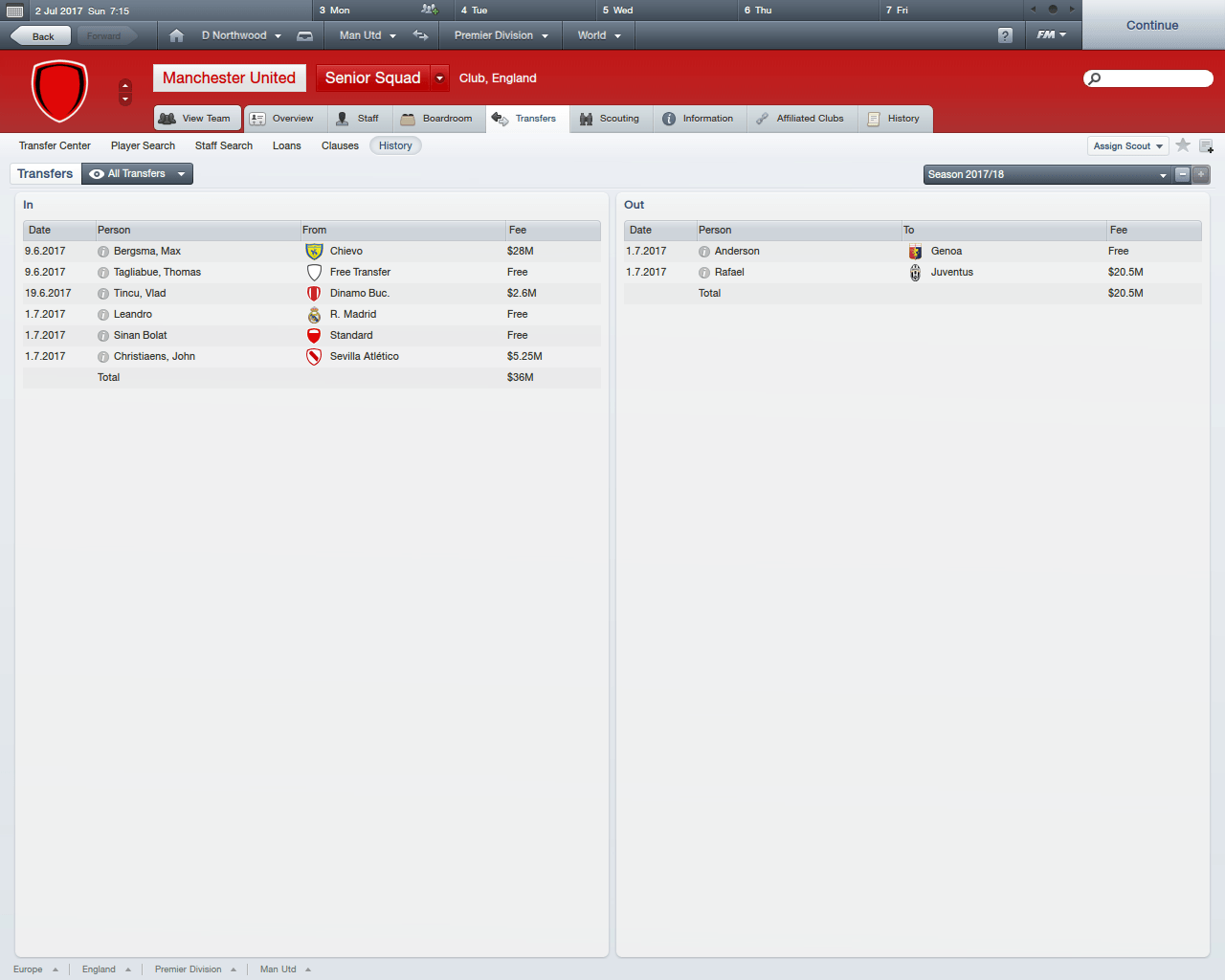 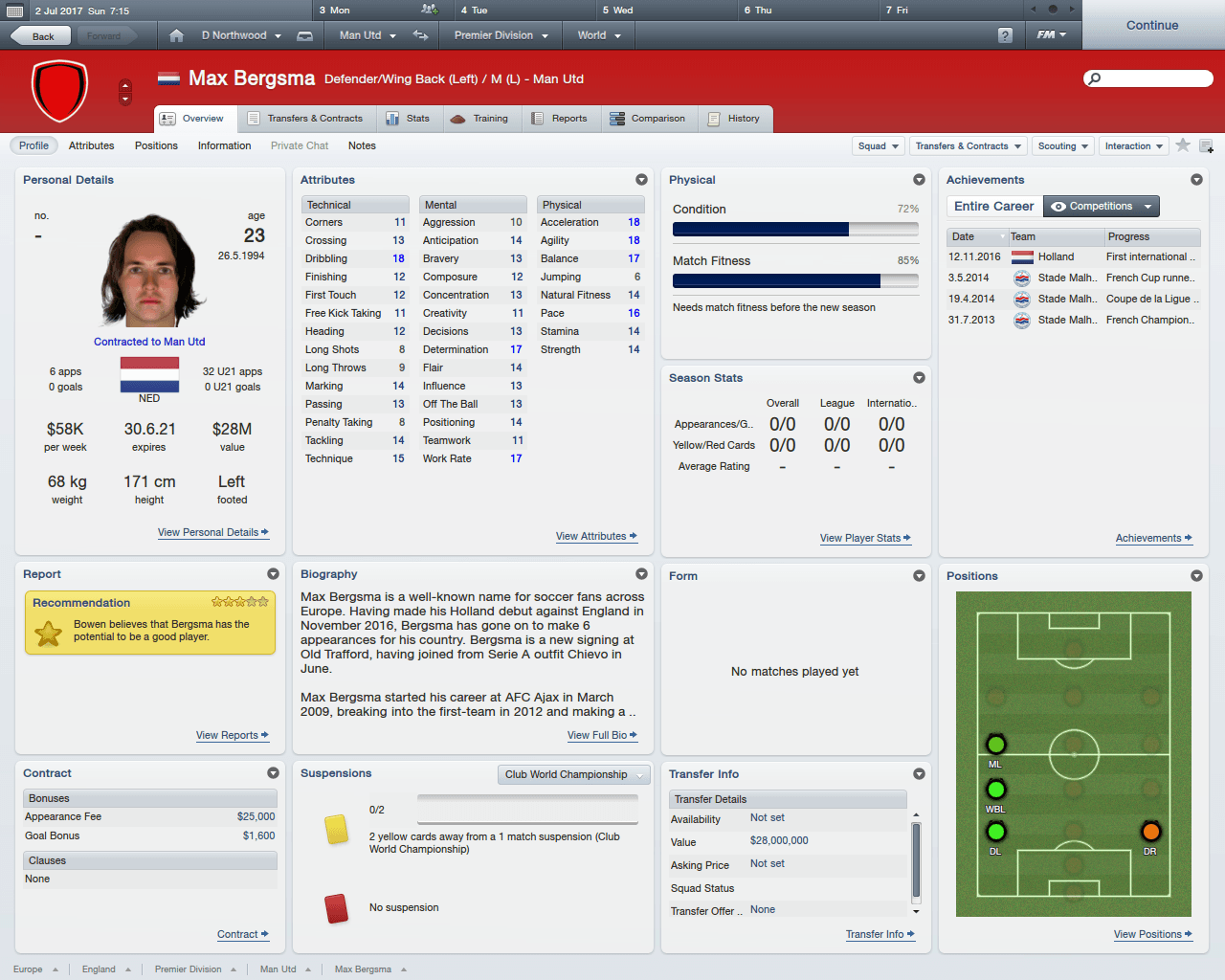 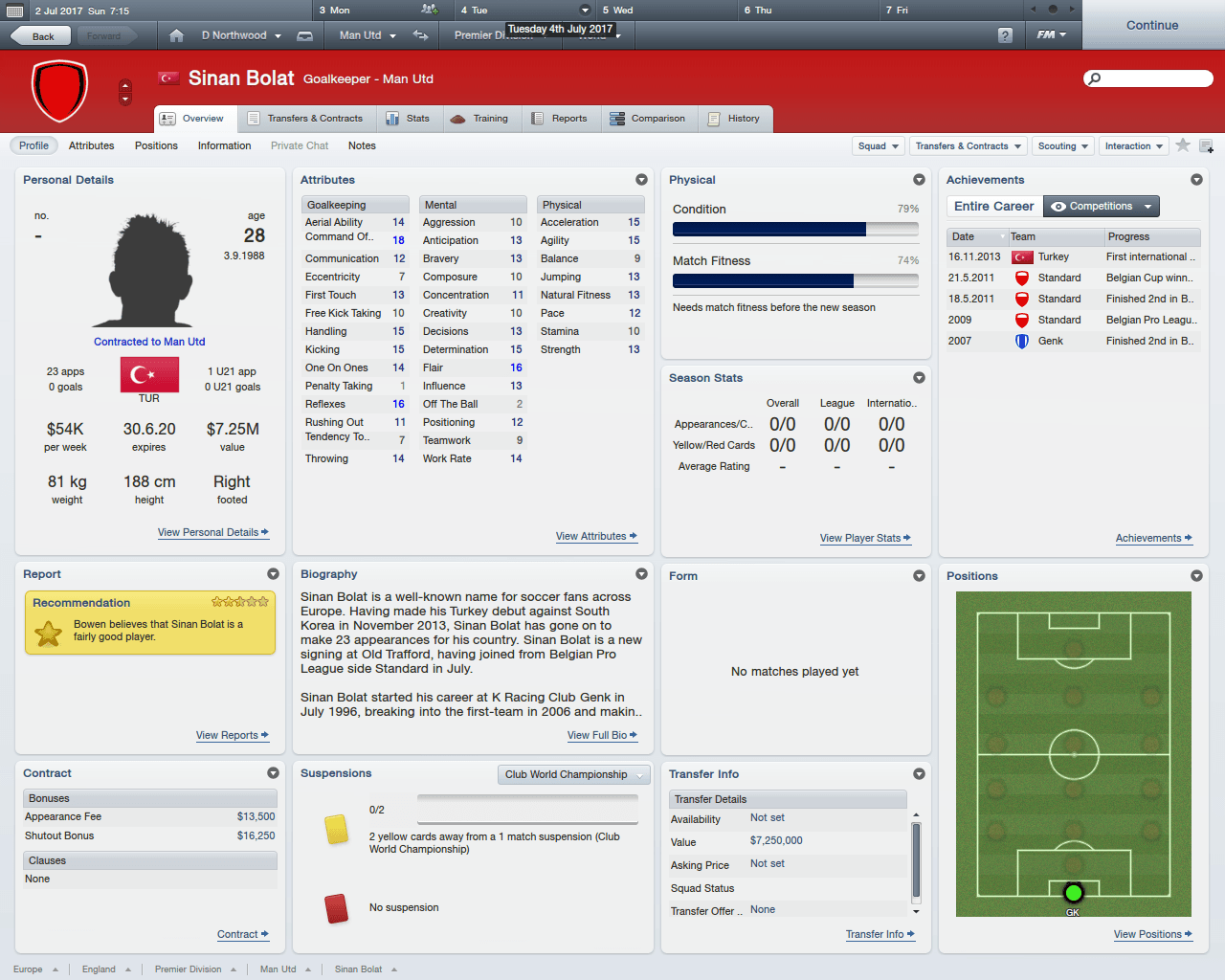 "PHENOMENAL!"
"INCREDIBLE!"
"A phenomenon"
Were the headlines in the newspapers in Manchester and whole England, as Northwood wins -FIVE- cups this season with Manchester United. And it was also his first season. The players did phenomenally, and the new signings are extremely promising too.


In regard to the hall of fame, I'm the best American Headcoach ever, but not in top 20 best managers of all time. I got 267 points only. For now
Login to Quote

Akash
7 years
I'm on the fence about the Bolat signing. Yes, he does look like a good keeper, but did you really need him? Although, on a free, there's not much harm!
Brilliant, brilliant performances in the leagues and the cups! Keep it up!
Login to Quote

crisrko
7 years
I decided to use that tactic of "cup keepers". Lindegaard is shit, so no thanks. Bolat will be my FA and League Cup keeper, while De Gea is my BPL one. Bolat will sometimes get to play in Champs league too. His performances in pre-season have been -GREAT-, so he's promising alot.

For me, the transfers have ended, I have bought and sold who I needed. Pogba was also transfered because Dortmunt enquired about him, and they gave me the money I wanted. Afterwards, he hit me out directly in the press, saying I wasn't playing him, yet he had 20 appearances and he was a -ROTATION-.

The transfer results are beneath. 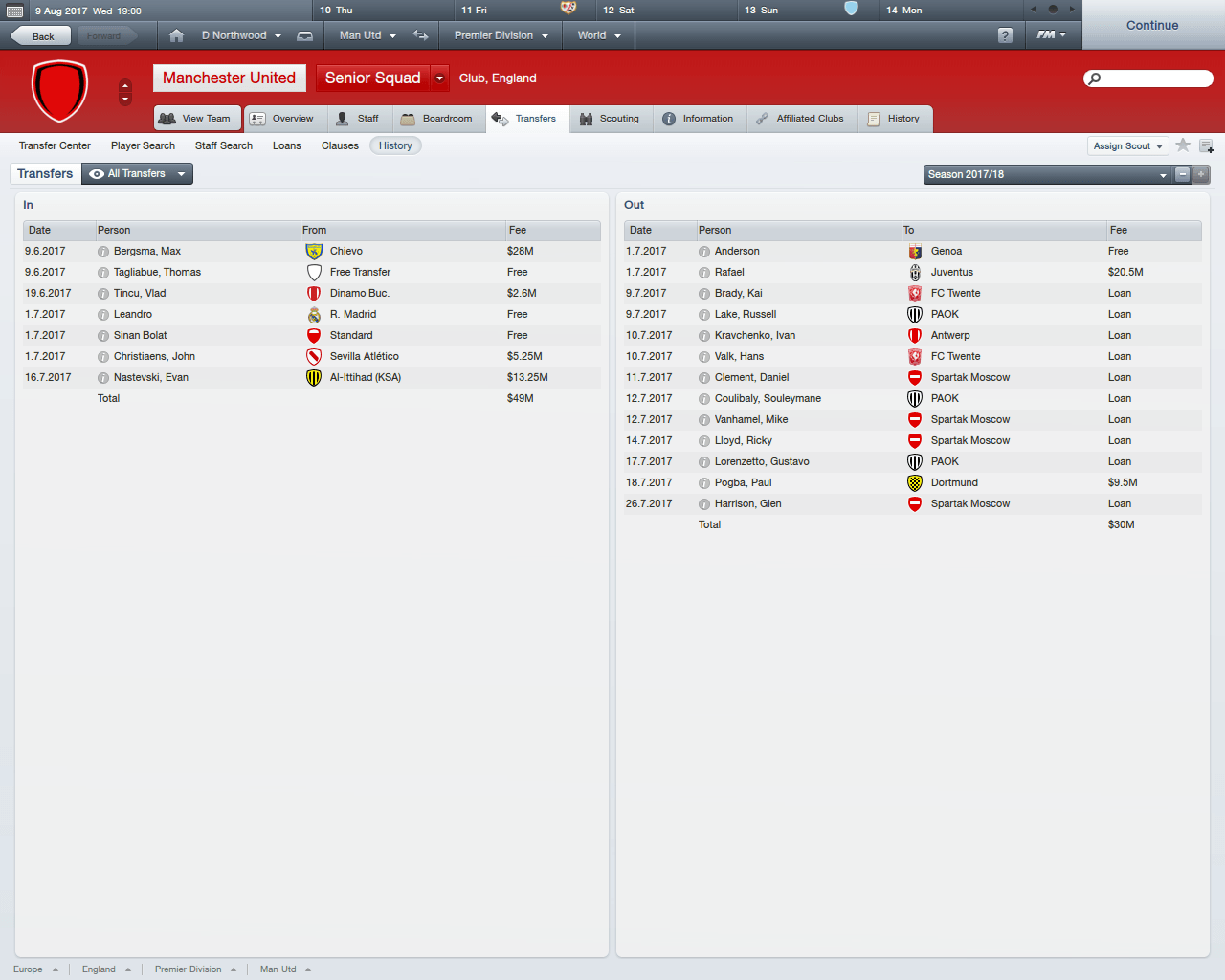 Here are the most promising players for the upcoming season, why? Their evolution, take as an example Sinon Bolat. 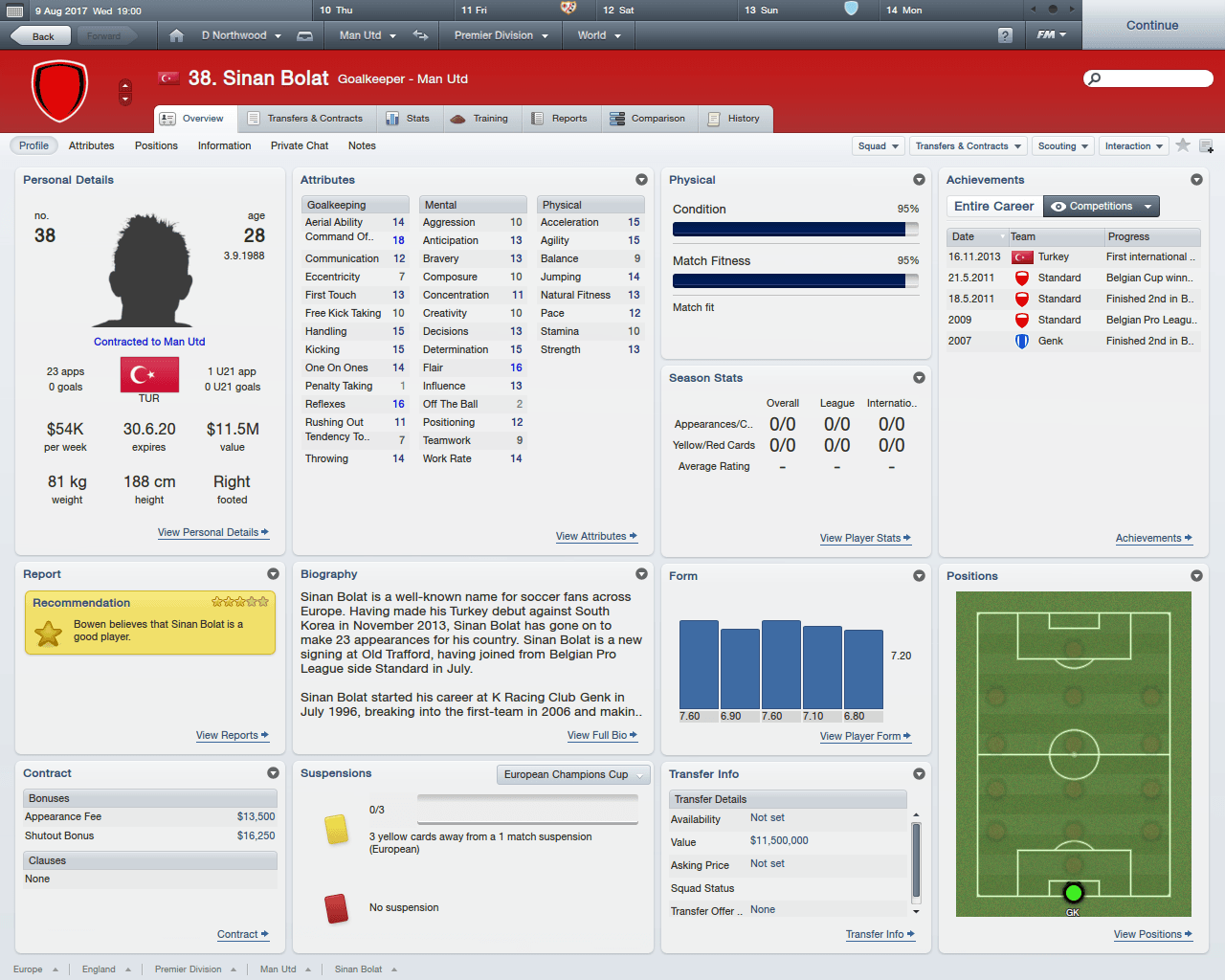 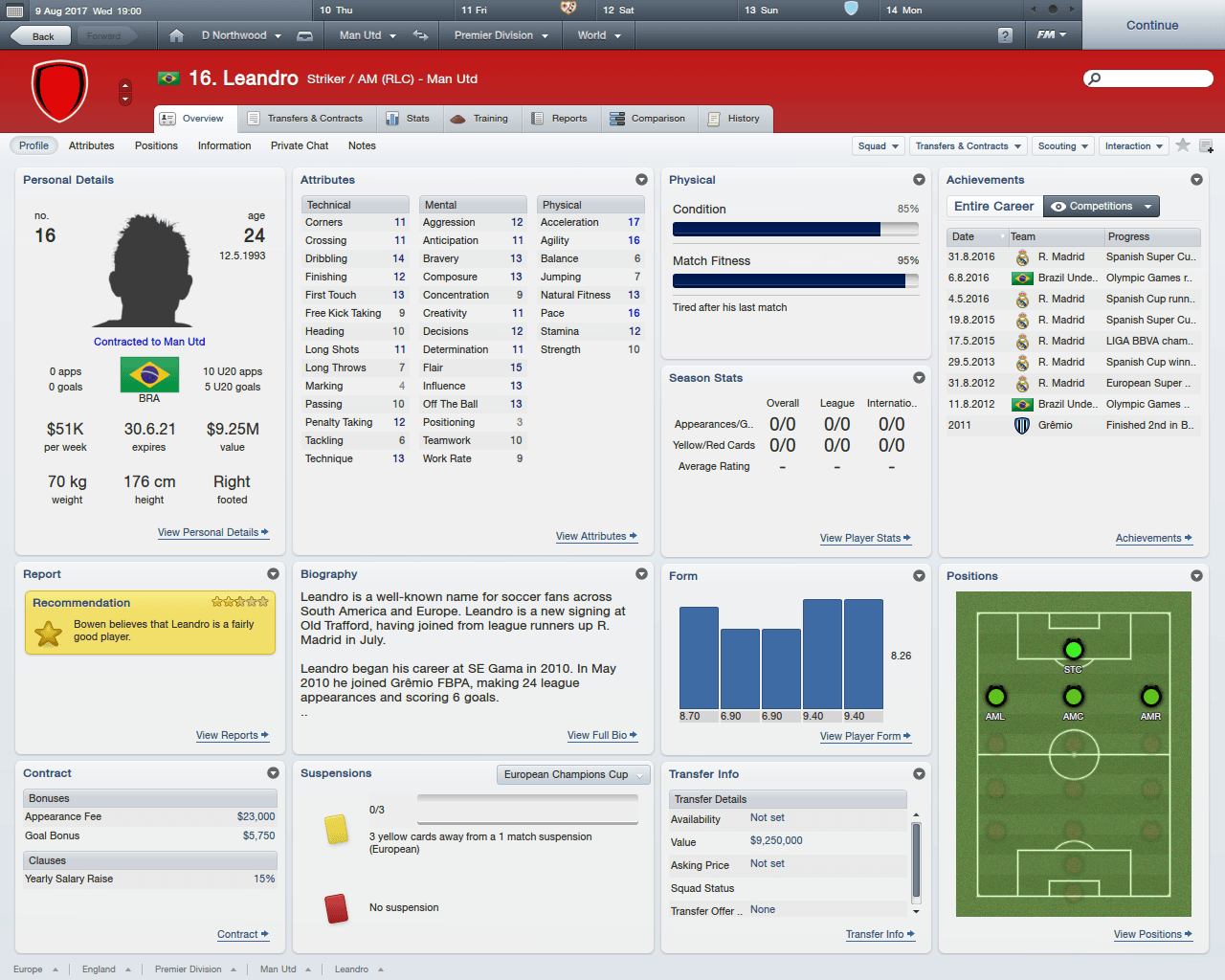 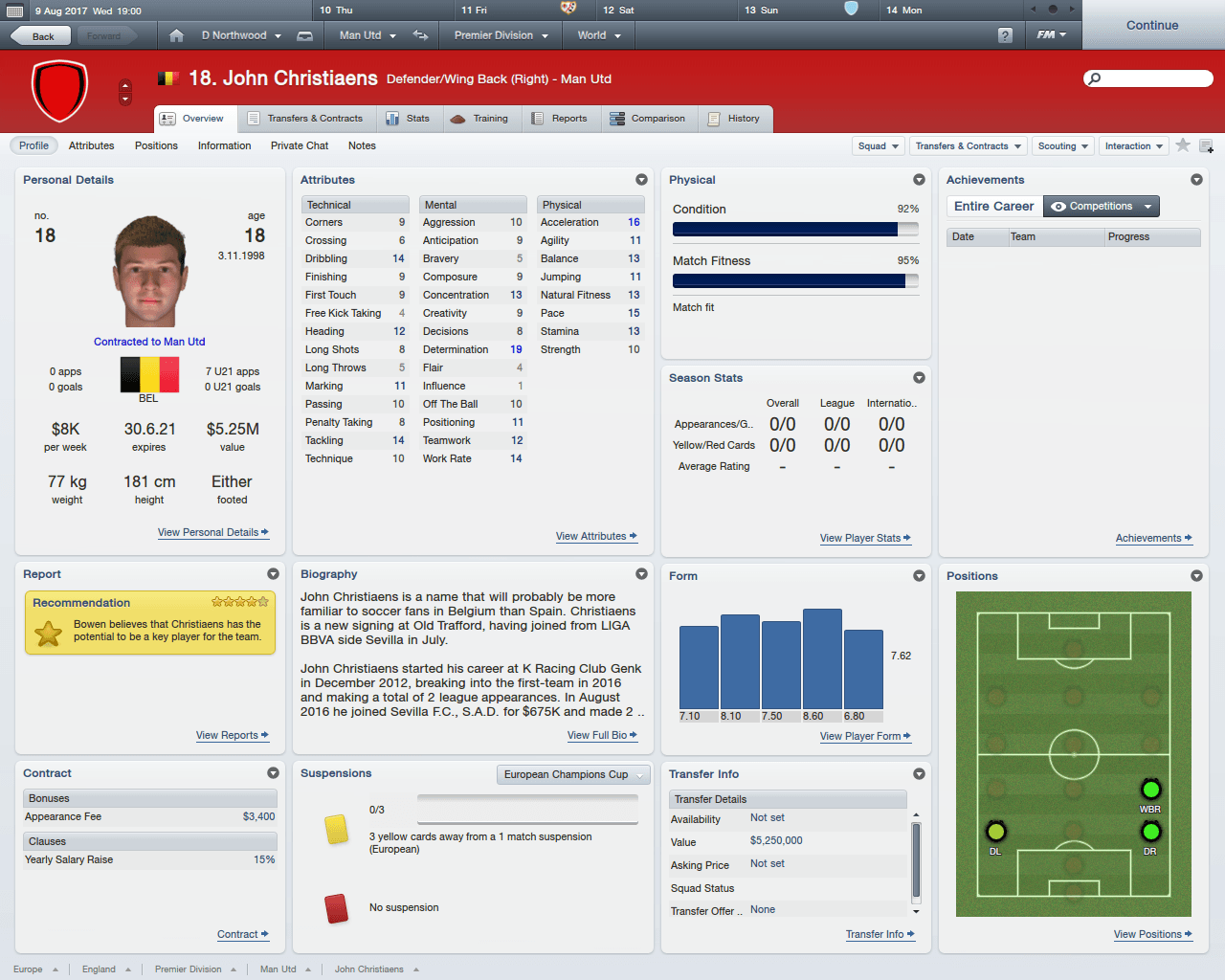 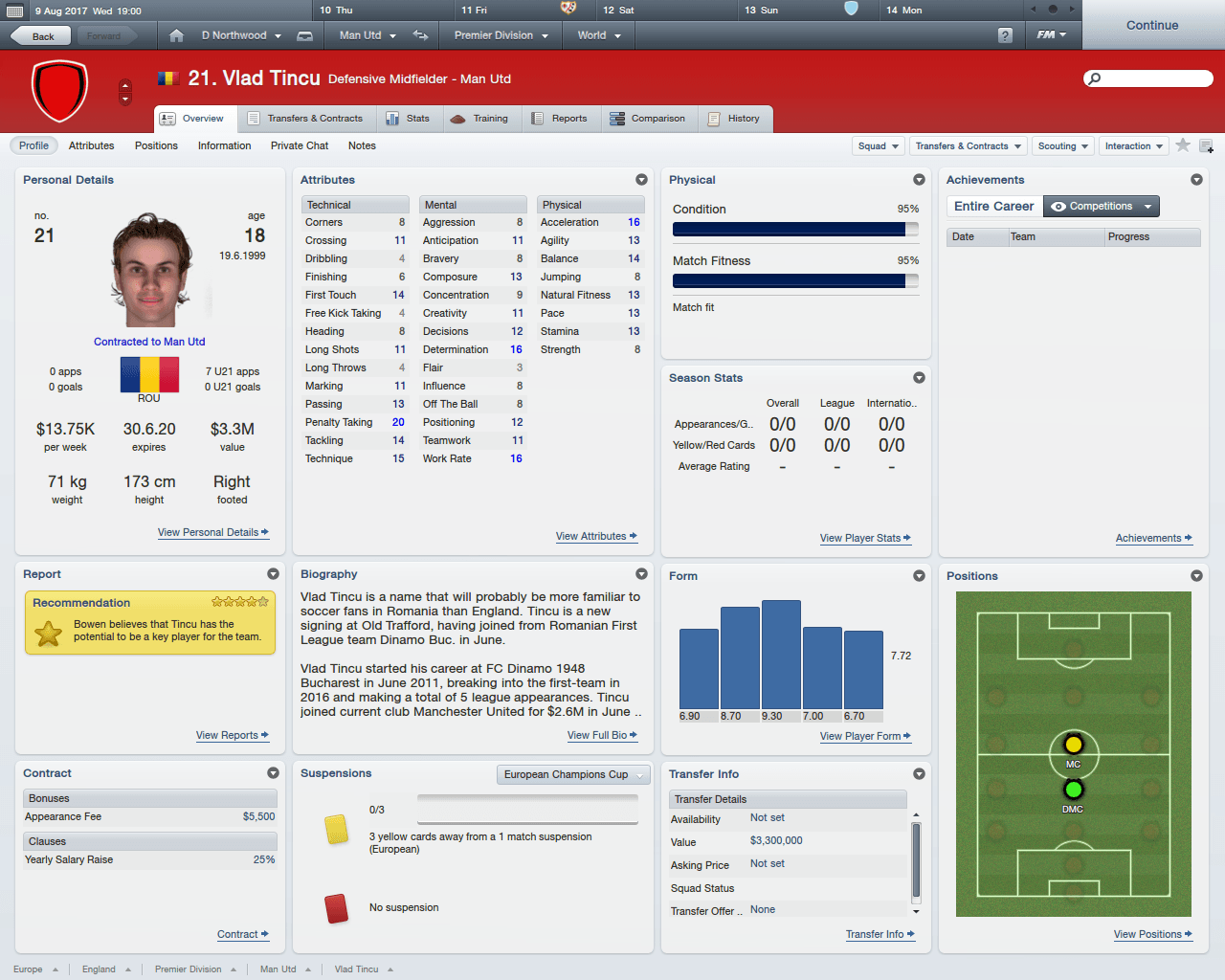 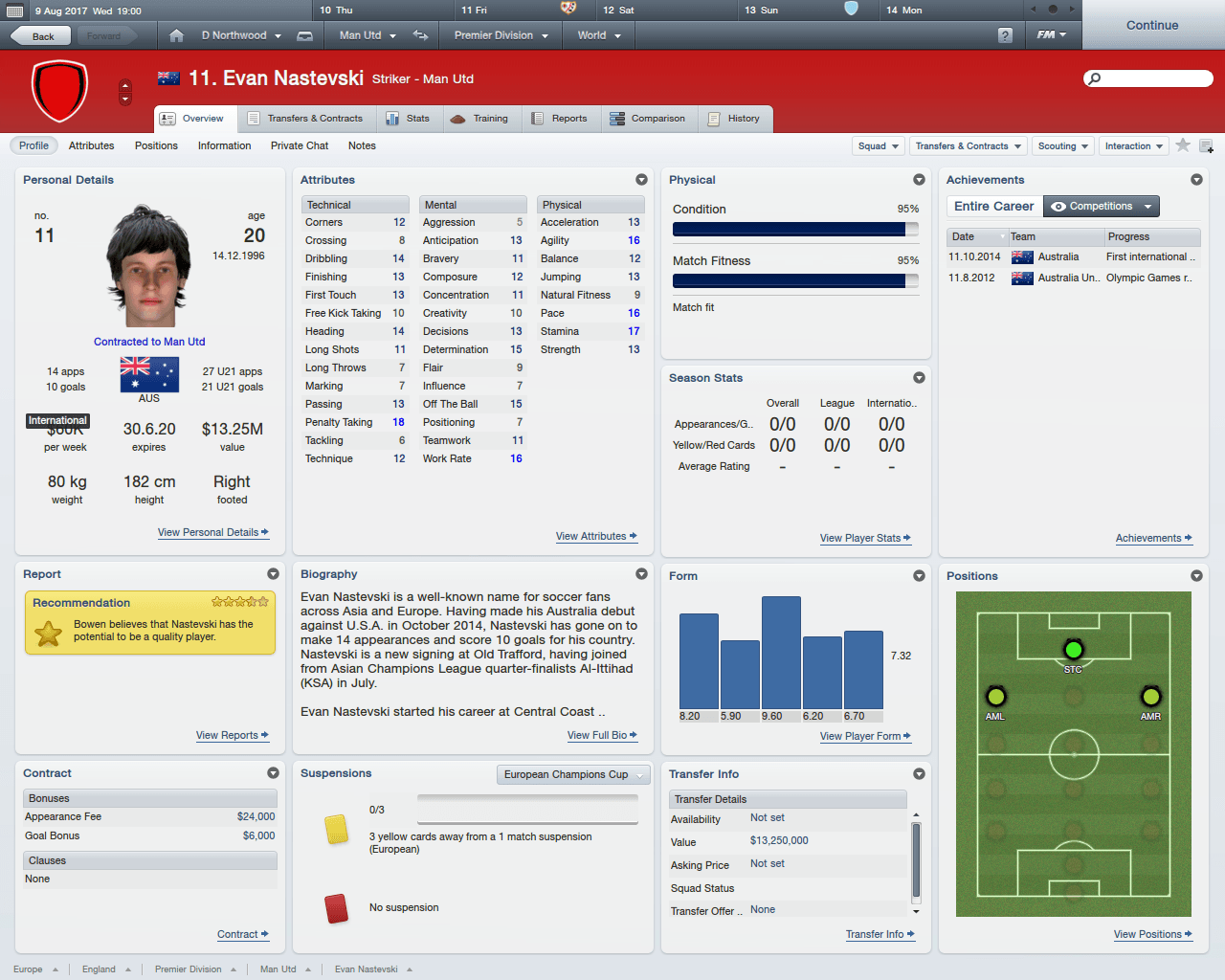 The community shield is once again against Manchester City. This will be the most contested clash, HAZARD and BALE, in a duel of Manchester. Regarding Premiership, we are touted as the runner-ups for this season, but you know me, I always defy the odds. Proved with Schalke, Steaua and even Manchester United, as we were touted 4th.

This season I'm opting for a younger squad, as you can see my signings are pretty young, but Tincu, even if he's from Dinamo, a team I hate extremely much, has the potential to be a -phenomenon-. Four stars at a club of Manchester Uniteds level. Now thats special.
Login to Quote

crisrko
7 years
Manchester United win! 2-2 is the final score on wembley, with Man UTD winning on penalties. Leandro scored on his debut, and Sinon Bolat was VERY good. Unfortunately, Tincu's rating went down because he screwed a pass and ManCity capitalized on it, making it 2-2 in 89th minute. Oh well.
The rest, you can see. 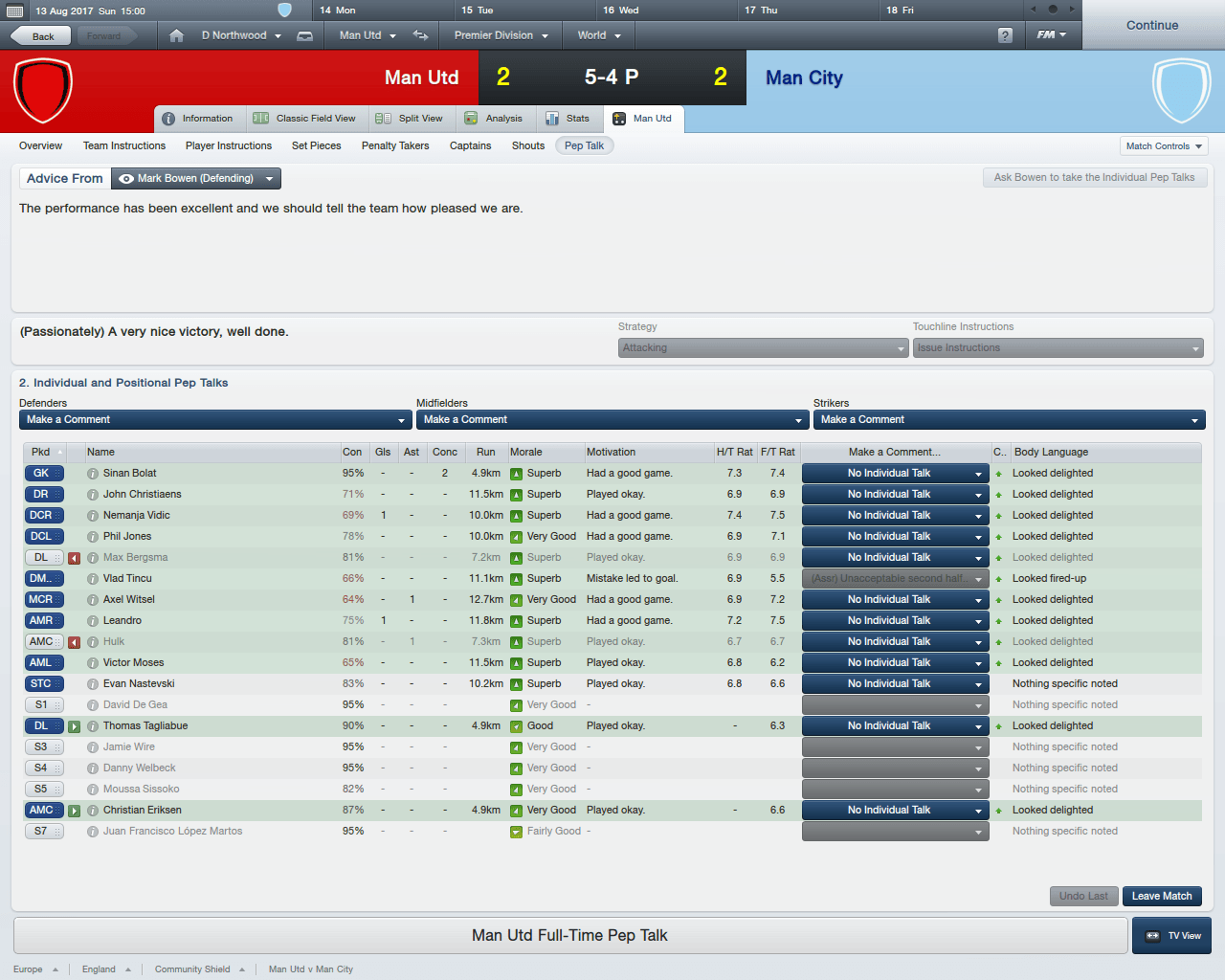 crisrko
7 years
This player promises to be a phenomenon, this boy is playing for Levante, THIS BOY IS 4 1/2 potential, and he would be around 22mil. SHOULD I? ITS TEMPTING! Mate, thats not even a hard choice.
Get him

Oh, and train him in rushing out - that and his pace are the only bad things about him - apart from that, he's already the best goalie in the world.
Login to Quote

crisrko
7 years
Already got him, and looking to sell De Gea. I don't need two 4stars + GK's since it'll be a problem rotating. I'll keep Sinon for FA, LC and such, and sell De Gea for 35, get 6mil profit
Login to Quote