With Arsene Wenger stepping down as Arsenal manager after so many successful years in the job to take charge of the France national team, the Arsenal board has made known their interest in Joey Barton, even though the Everton manager has only just signed a contract extension that will stretch until 2015. 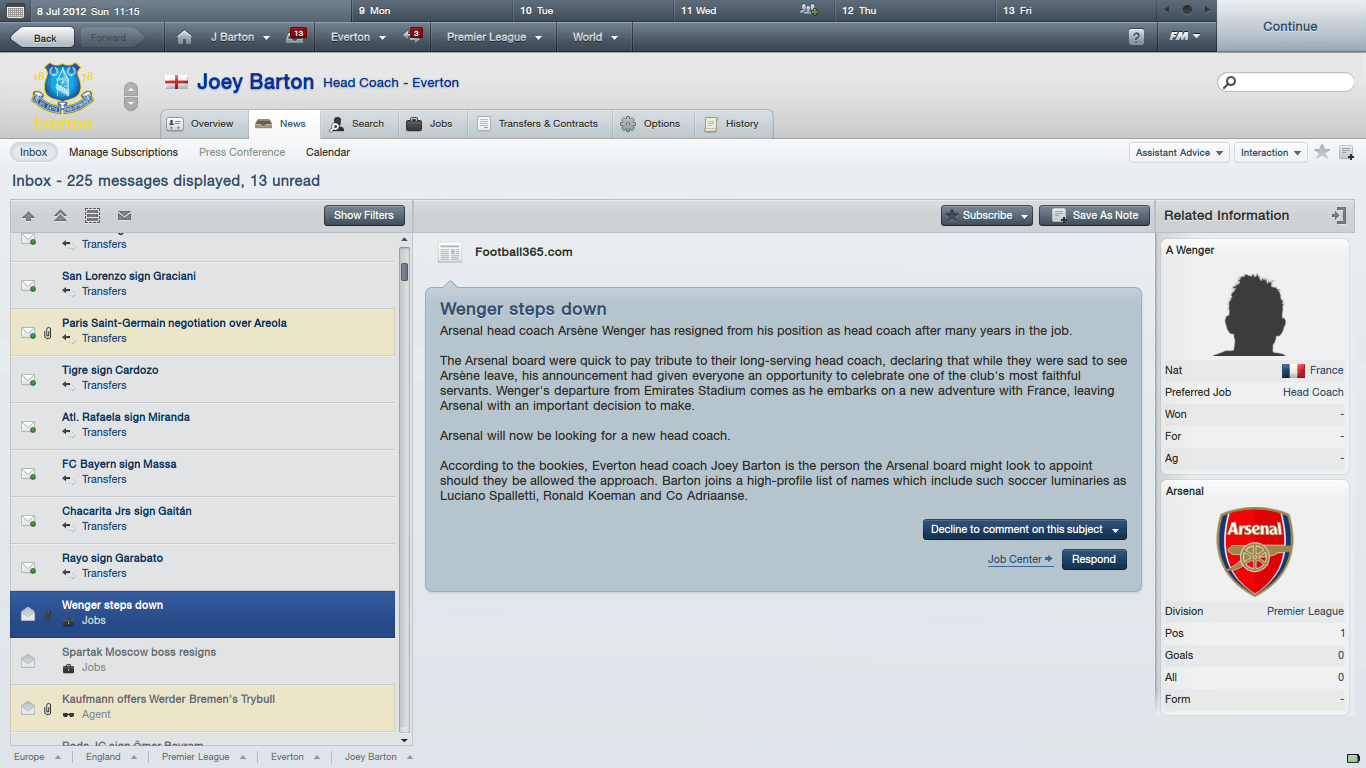 However, Barton has moved to quash any speculation linking him with Arsenal.

Everton look even more likely to replicate last season's surprise title challenge as their strike-force has been strengthened once more with Javier Hernandez joining from Manchester United in a surprise loan deal. 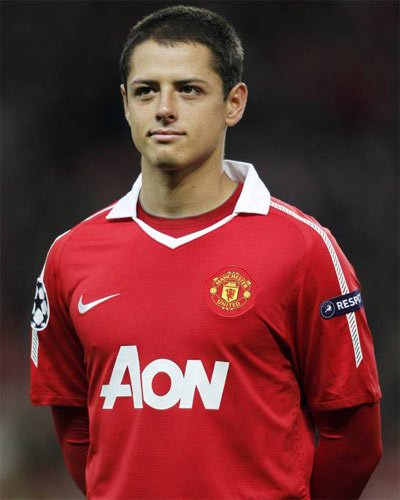 The transfer comes as a surprise with the Mexican striker having made 23 appearances in the Premier League for Manchester United last season, and with Sir Alex Ferguson making no hint of his desire to send Hernandez out on loan.

Chicharito, as he is known, will take the No 14 shirt and is sure to play a key part in Everton's campaign this season.

"I'm fucking delighted!" Barton said with glee when asked for quotes from reporters. "Look at our strike force! It's fucking incredible!"
Login to Quote 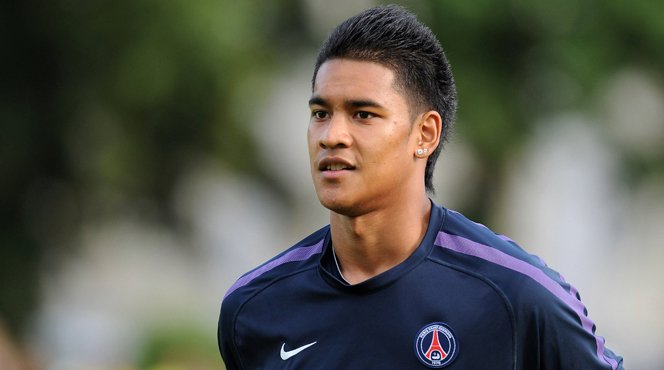 19-year-old Areola is touted to be a star of the future and one of France's best keepers in a few years' time, and his arrival at Everton cost a reported 7.5M.

Tim Howard might still be Everton's first choice keeper, but Areola has said he wants to oust Howard.

"The manager told me as soon as I arrived that I won't be going out on loan," said a clearly excited Areola in French, talking to BBC Merseyside an hour after his medical. "I will be backup to Tim Howard this season. But I want to be the first-choice keeper in one season. That is my goal. I am very excited to be able to come to England and Everton."
Login to Quote

Everton have snapped up 18-year-old Brazilian Romario on loan, whose natural position is at right back but is comfortable with moving up front as a right midfielder. 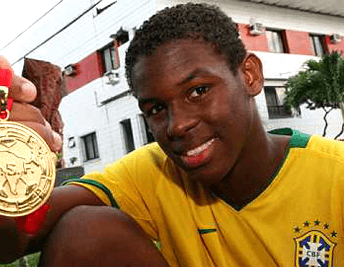 Romario's loan contract at Everton includes a 3 million option to purchase him permanently from Corinthians. Remarkably, he is Joey Barton's seventh signing of the summer and Barton still wants more reinforcements, reported to be a left-back, one more right-back, and a right winger.
Login to Quote

Glenn T
10 years
Transfer business as usual, and I read this in the news today: 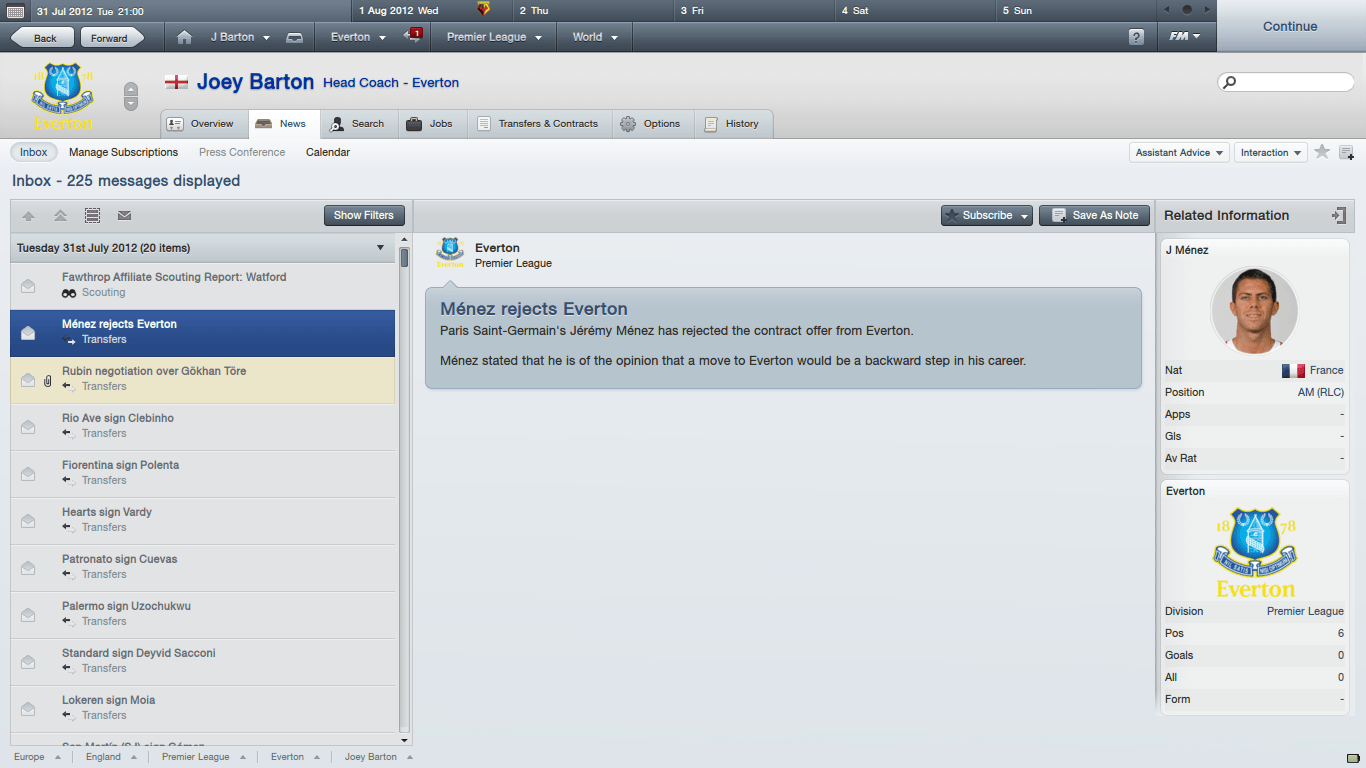 I just had to phone his agent and go into a stream of expletives.
Login to Quote

As soon as he had completed his loan move, Victor and I had a talk over the phone, and I must say it didn't go very well. 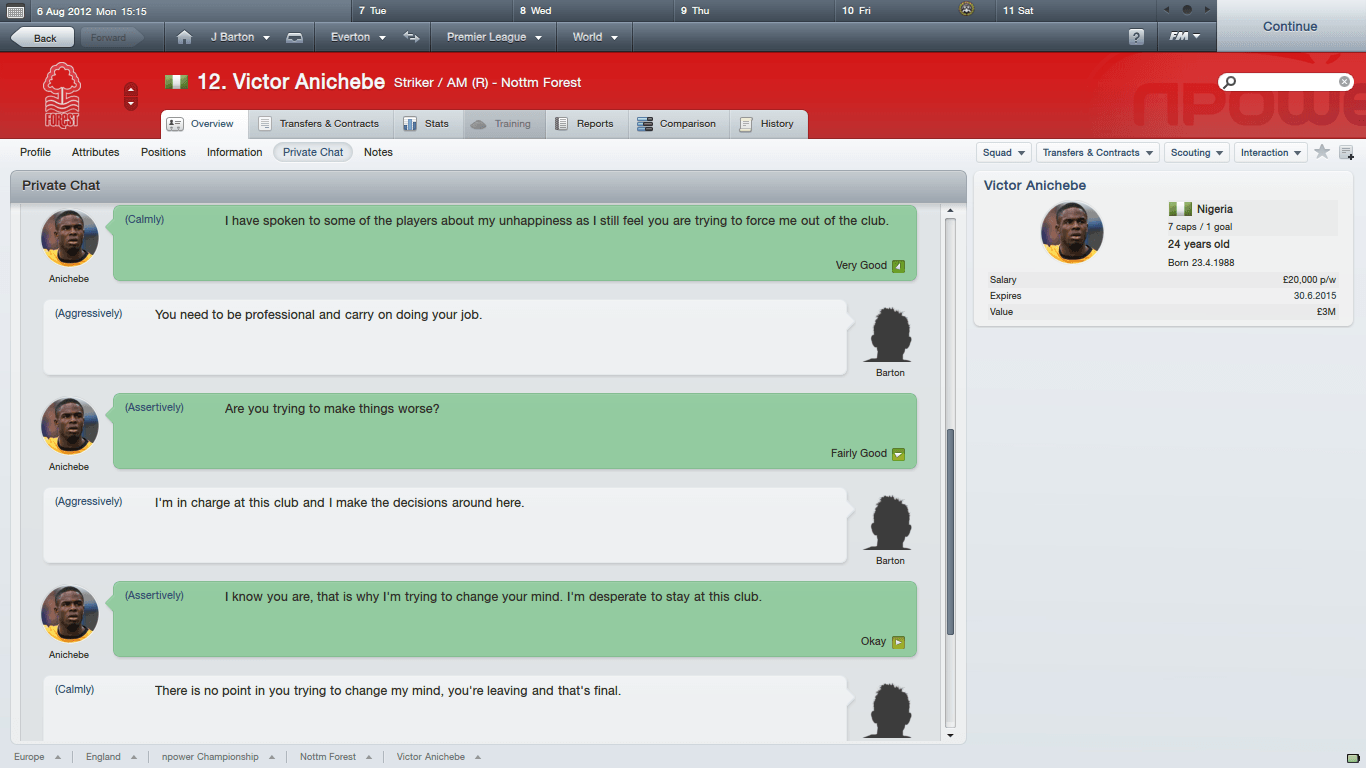 He should have known better than to try and challenge me, Joey Barton, anyway. I am even more sure now that he has no future at Goodison Park. Modena has shown an interest in signing him permanently and hopefully I can ship this nasty boy off to Italy once his loan finishes.
Login to Quote

Everton and Joey Barton have spent only 10 million on Alphonse Areola, Javier Hernandez, Fernando Llorente, Romario, Nazmi Faiz, Simone Calvano, and Yaya Sanogo this summer. However Barton has finally splashed all the cash on Rubin's Gokhan Tore, bringing the 20-year-old right winger in from Russia in a deal reported to be around the region of 20 million. 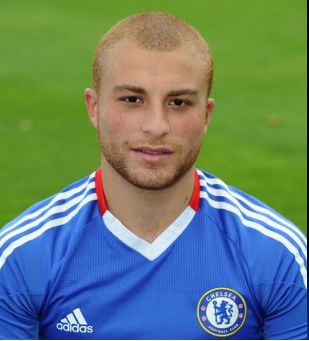 Everton and Rubin will be familiar with 20 million deals. Last summer, Everton purchased Salvatore Bocchetti from Rubin for 20 million as well but Bocchetti was hampered by injuries in his first season in England.

Barton is convinced Tore, who spent his youth at Chelsea before making the move to Rubin last summer for just 1 million, will have no such problem.

"He's been here before," Barton said, in the press conference unveiling Tore. "He's been in England before, with Chelsea and everything, so it helps. He's really fluent in English so there's no language barrier, plus he knows what's it like in the Premier League."

When asked about the fee Everton paid, Barton said, "are you saying if players come to clubs for big fees, they'll definitely flop? Take a look at Eden Hazard at Chelsea, mates. Speaking of Chelsea, at least I didn't pay 50 million for a player, eh?"
Login to Quote

Glenn T
10 years
A rather good pre-season, except the loss against Ipswich. 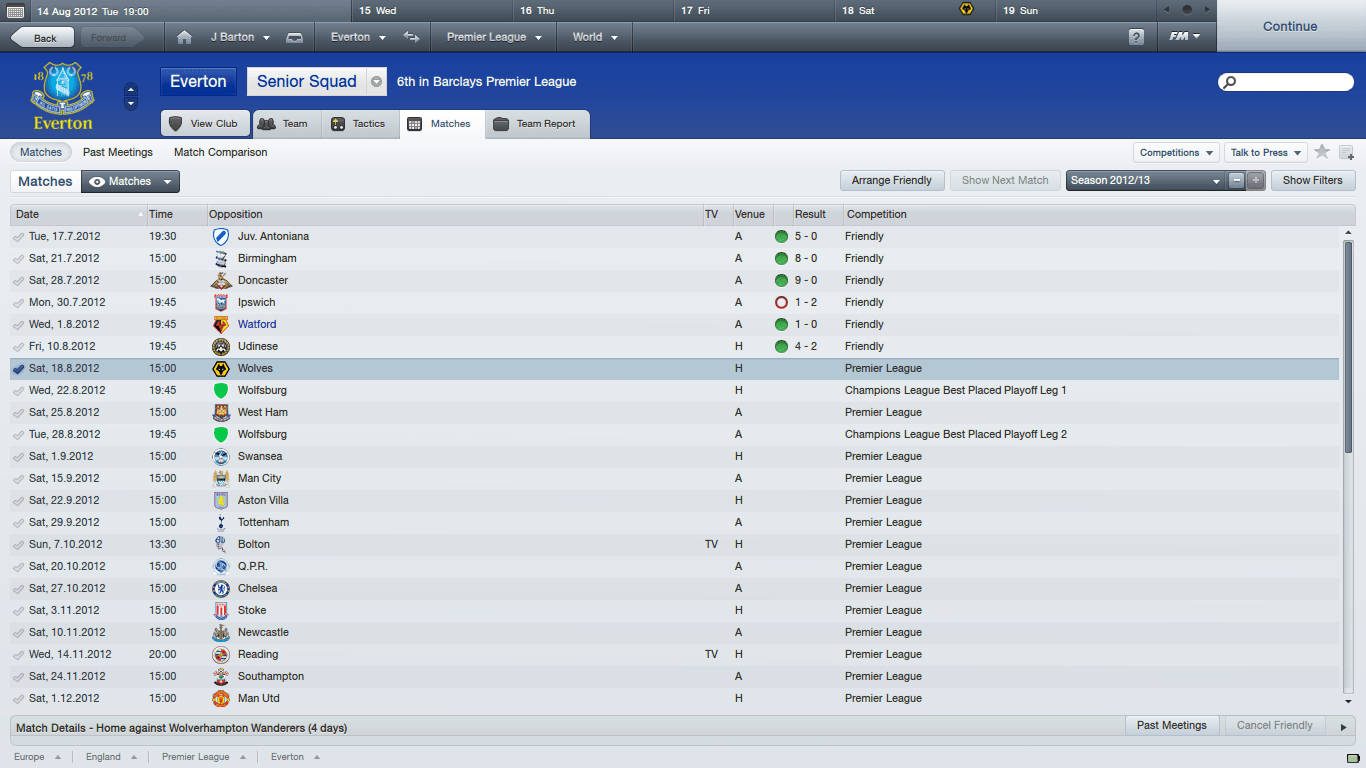 My new signings were fantastic, and I also tried moving Emilio Izaguirre up front more as a left winger, needless to say Iza did well, and was in fine goal-scoring form during the friendlies. 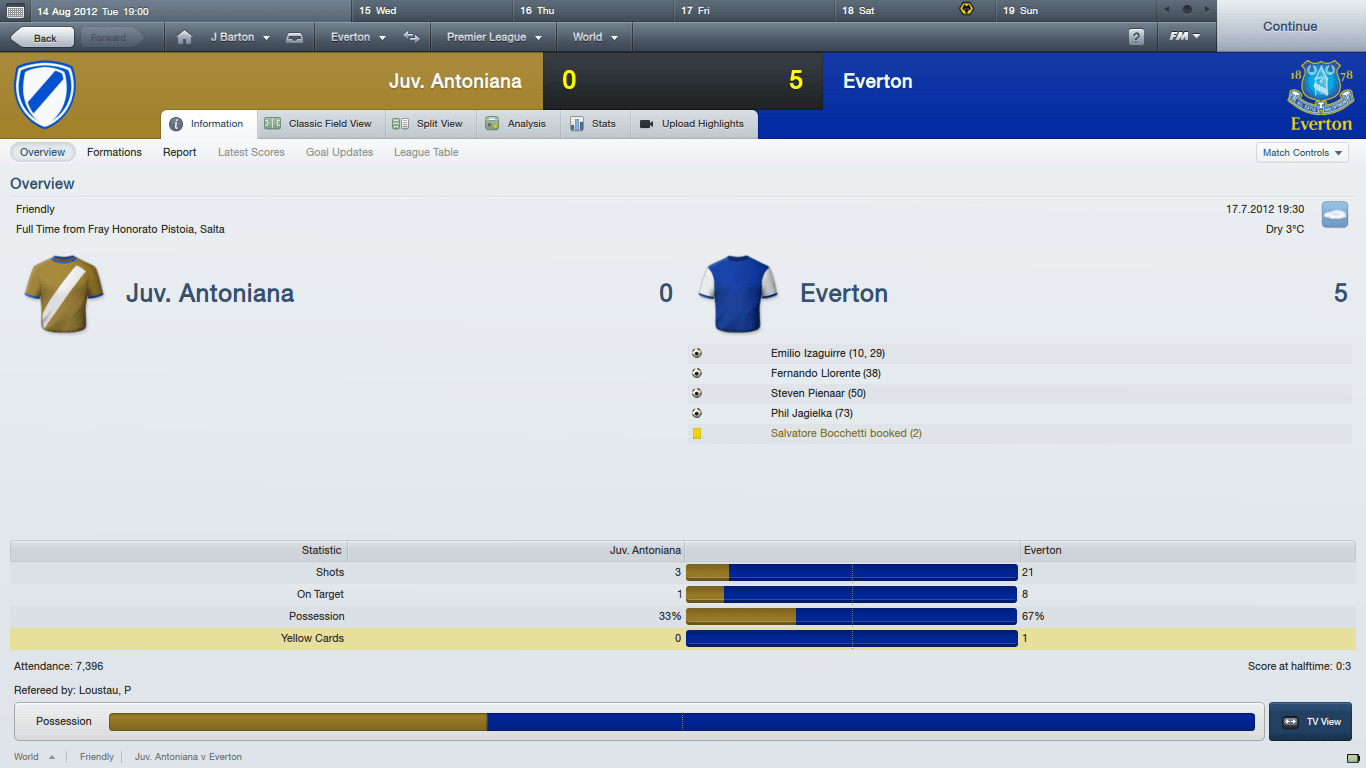 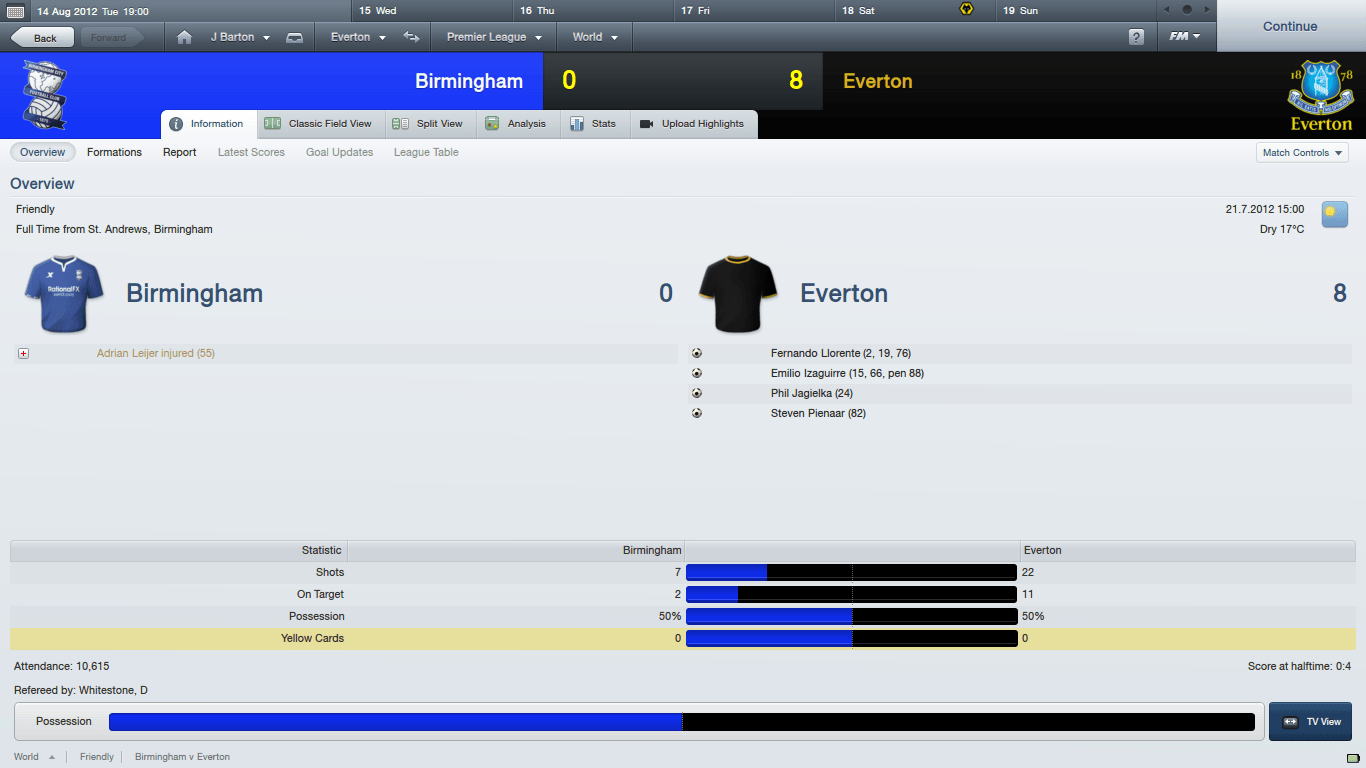 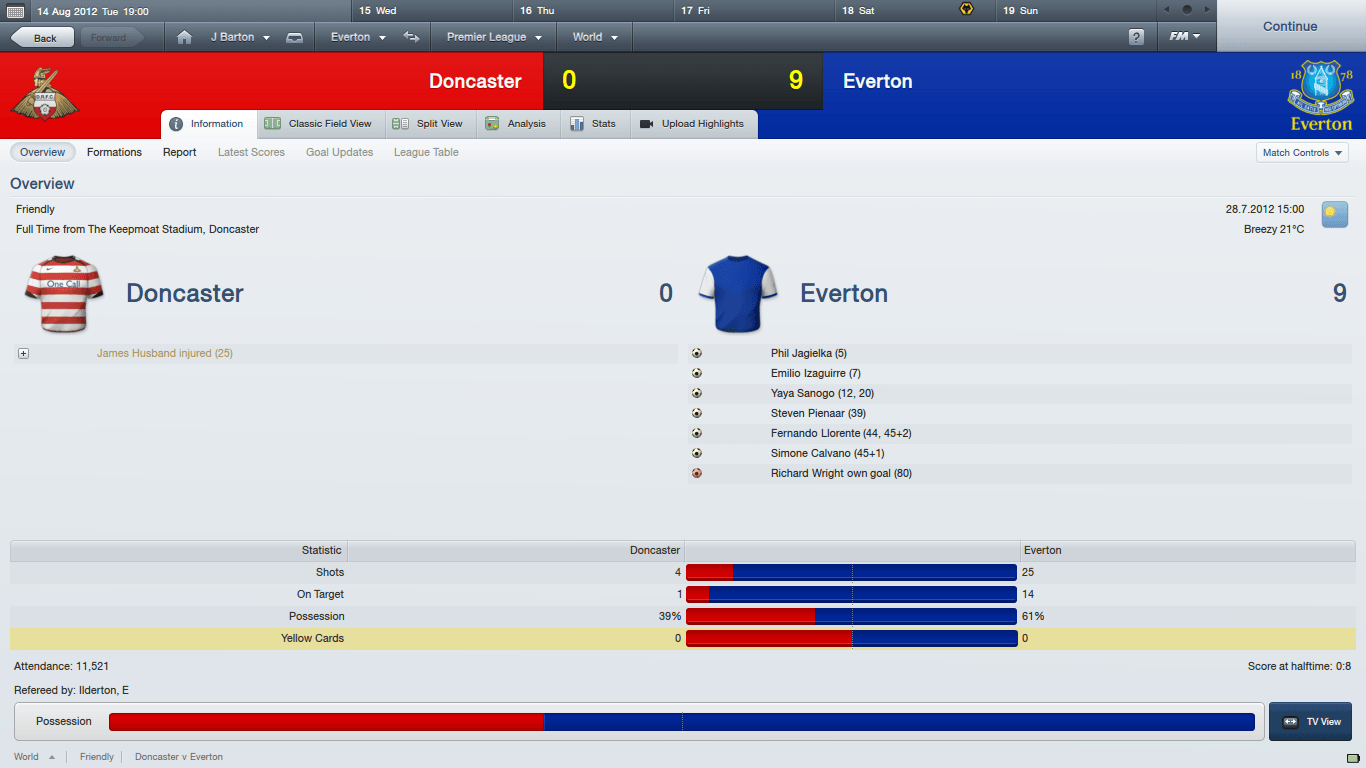 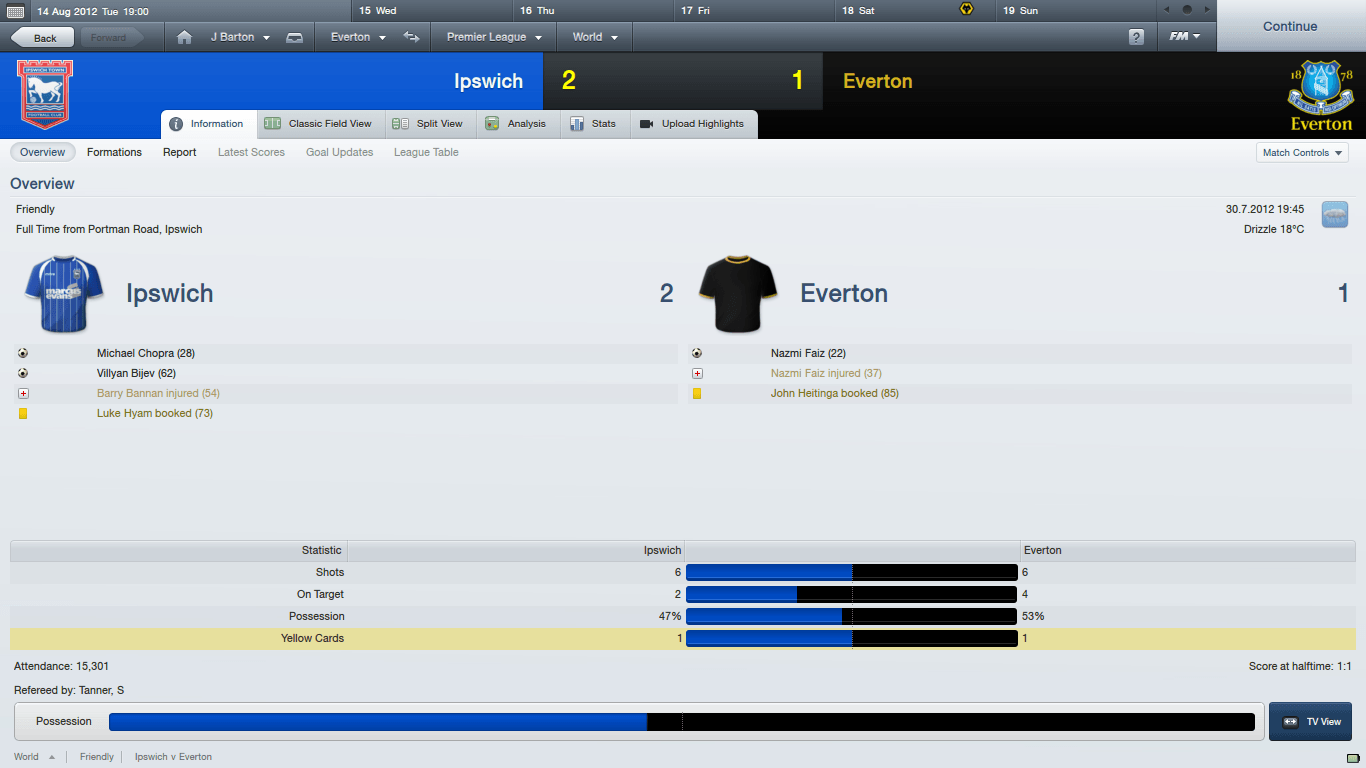 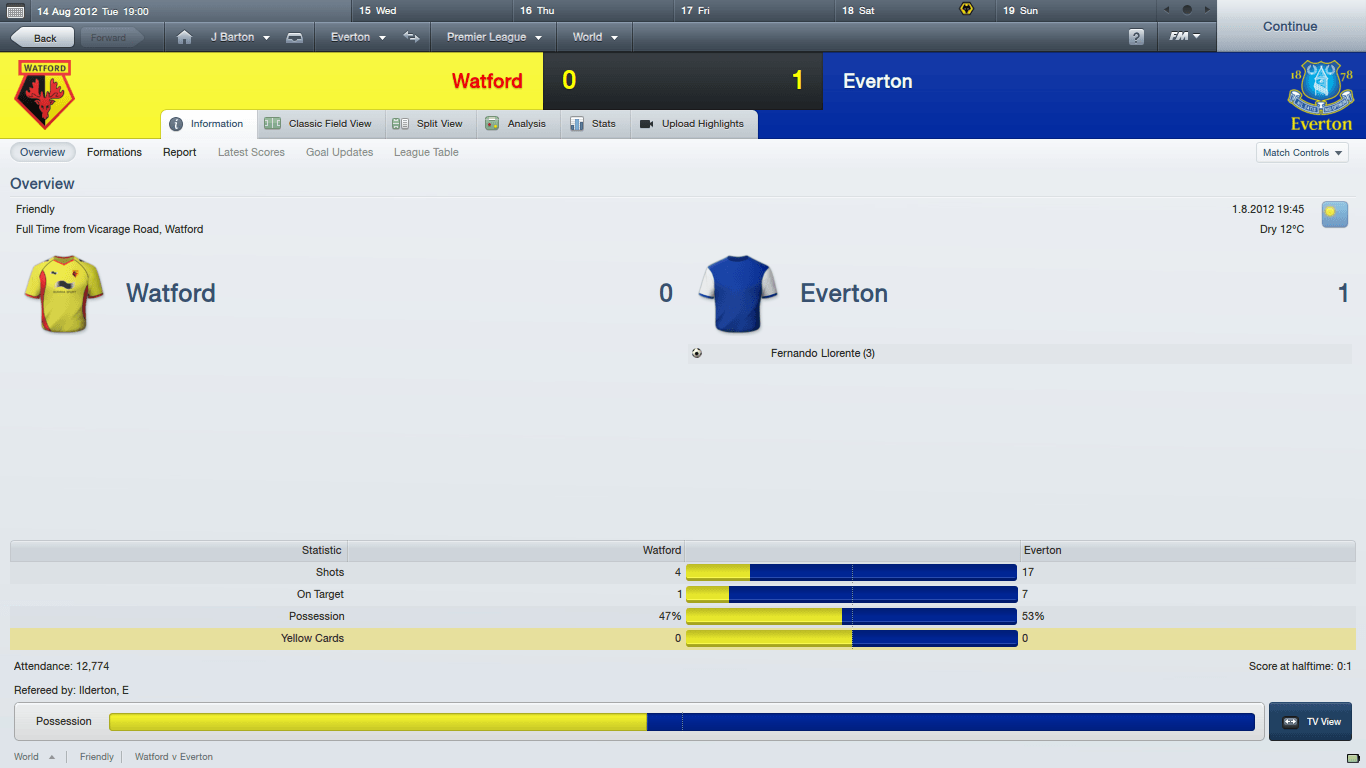 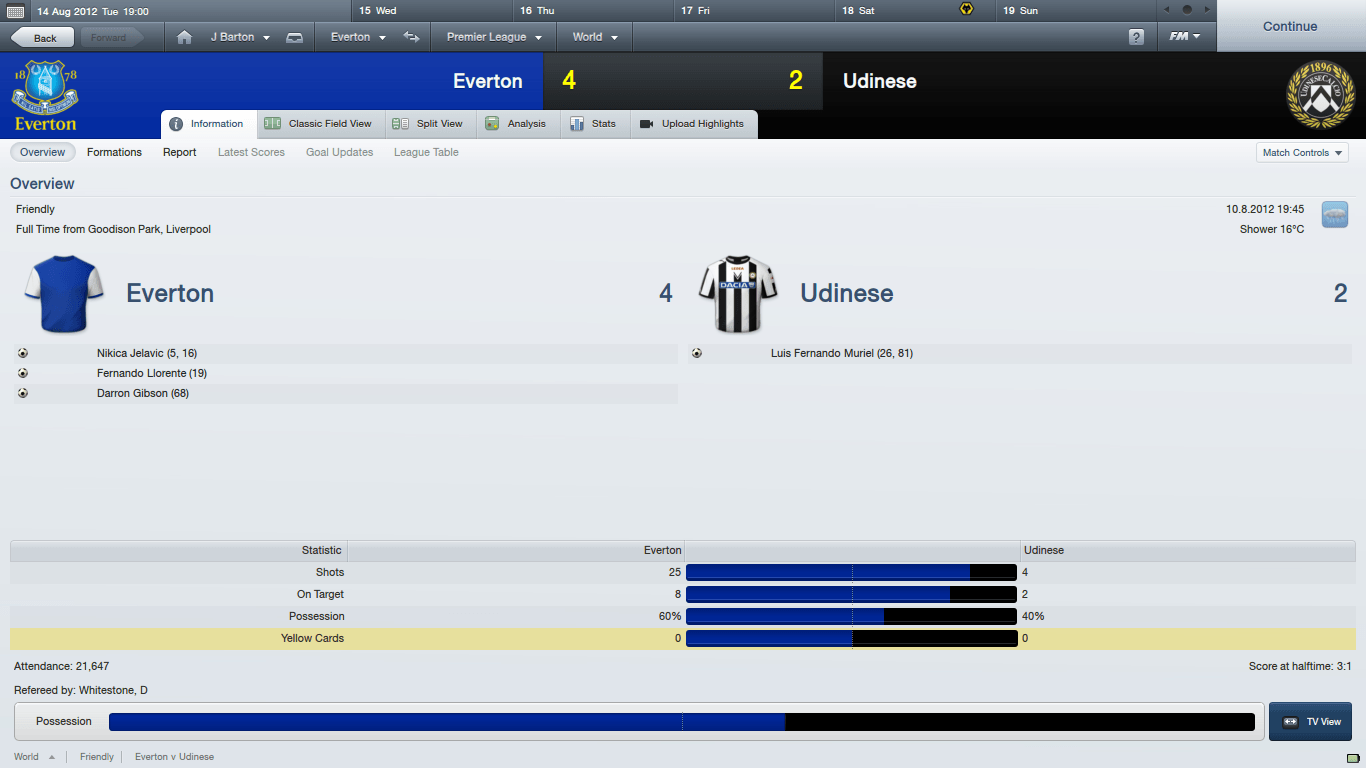 On to the new season!
Login to Quote

Glenn T
10 years
Arsenal have asked of the availability of John Heitinga. According to Bill, Arsenal wanted me to quote them a price for our Dutch defender.

Well there was no way I would be letting my newly-appointed vice-captain leave.

I told Bill that Arsenal should not bother making a bid unless it's a bank-breaking one.

Of course, I was very annoyed when Arsenal's manager Luciano Spalletti came out and publicly announced of his desire to get Johnny into their team.

I studied my computer, which was on the website of the Daily Mail, reading Spalletti's quotes.

"John Heitinga really interests us," Spalletti told a Daily Mail reporter. "Our team is short of quality at the defense really and having Heitinga at the back with us can really help give us a boost."

As I was reading through, I got a phone call from a Daily Mail reporter, asking me for a response. That was quick.

Half an hour later I was talking to a few reporters, telling them that I had no wish to let Heitinga leave the club.

"Of course, if John wants to go, he can," I admitted, choosing my words carefully. "But if you ask me, no, I don't want to sell him. He is an important player for us and has recently been appointed vice-captain as well. His defensive partnership with Phil works very well and that was partly why we were able to finish 4th last season. Everton are playing in the Champions' League this season, and remind me where Arsenal is playing? Right, the Europa League. Why would he want to drop down to a club of lower standard, eh?"
Login to Quote

Glenn T
10 years
We demolished newly-promoted Wolves in our first Premier League game of the season, as well as dominating the entire game against Wolfsburg as the club made their first Champions' League appearance since 2005 in a 4-0 win. The second leg should be easy and our passage to the group stages of the Champions' League is all but guaranteed.

Glenn T
10 years
Wolfsburg was brushed aside again as I handed Yaya Sanogo his first Everton start and Alphonse Areola his Everton debut in a 2-1 win in which Ross Barkley and Gokhan Tore scored, to propel us into the Champions' League group stages on 6-1 aggregate.
Login to Quote

Everton looked like they had completed their summer transfer window with, spectacularly, 8 signings. However, it seems the temptation of some emergency transfers on deadline day couldn't be resisted.

One of them is Kevin De Bruyne on loan from Chelsea. Although the move is seen as one to help De Bruyne gain first-team experience, Everton have inserted a 15 million option to buy that can be activated any time during the loan spell, as reported by Sky Sports News. 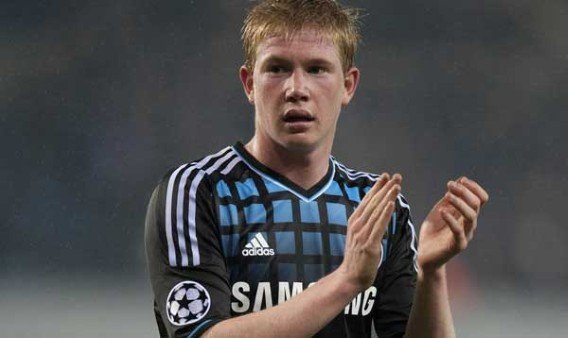 The second, is Steven Crowe from Crewe Alexandra. The 16-year-old midfielder is a product of Crewe's youth system and is said to be Crewe's next Nick Powell who last summer completed a move to Manchester United, and he will make the move to Merseyside for just 300k. 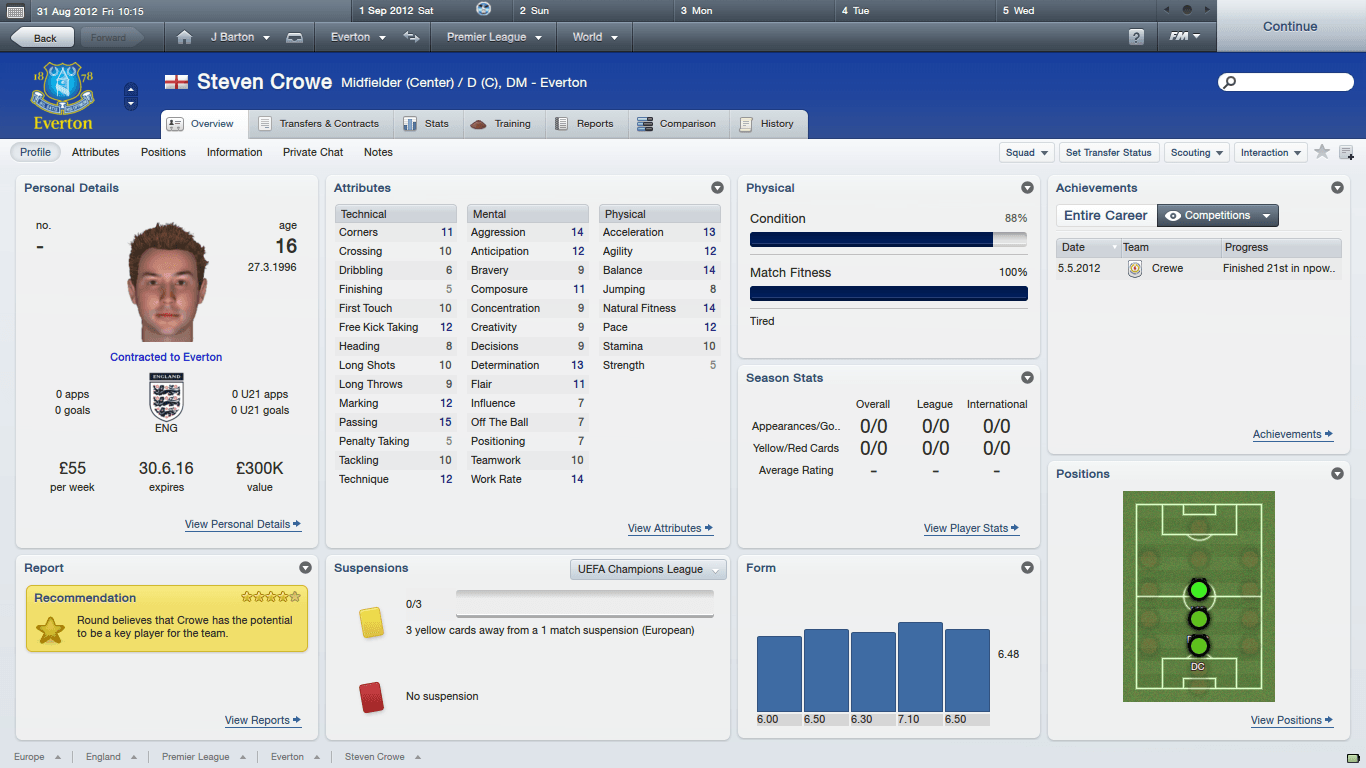 Transfer business aside, the Champions' League Groups have been announced and Everton will need to muster all they can to get to the Knockout Stages, with Milan and Atletico Madrid sure to be huge obstacles. 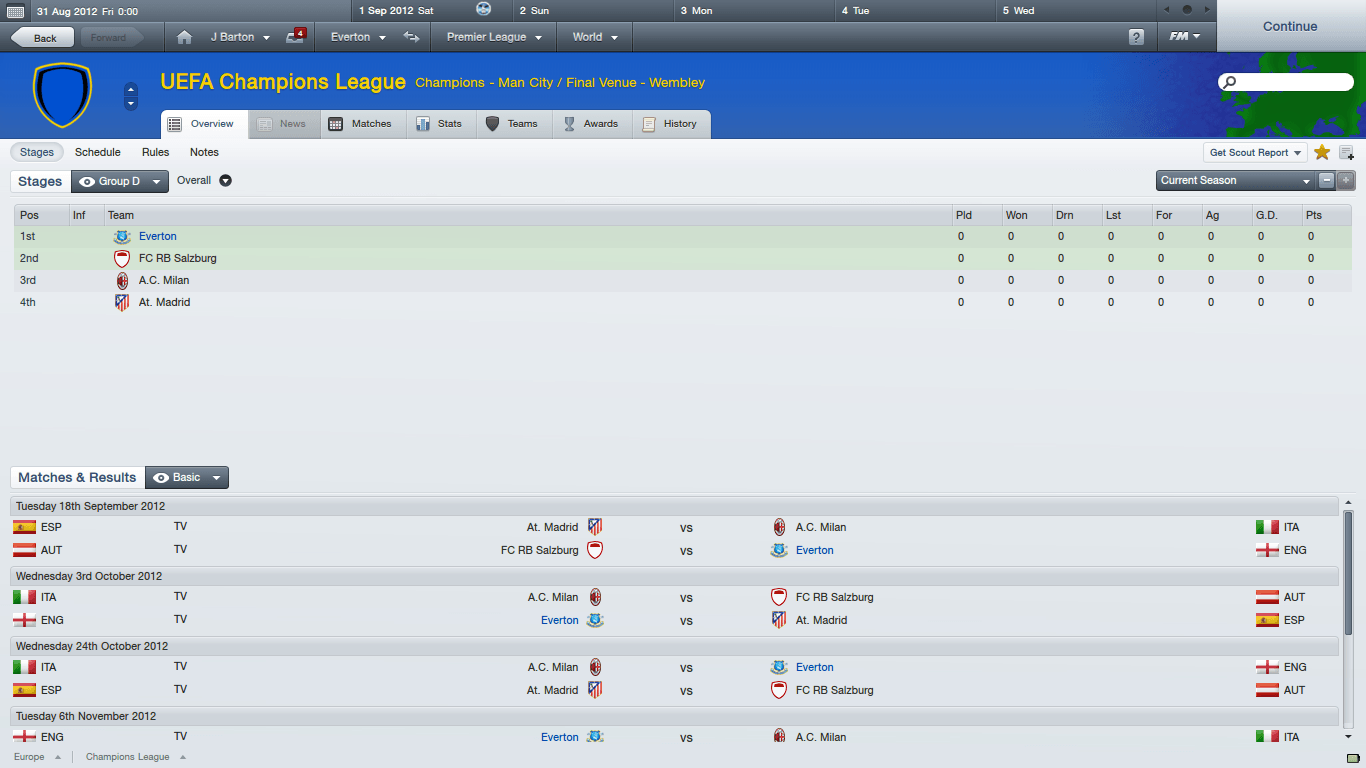 Henna96
10 years
Very nice story. Good to see that the results are good as well. Keep it up!
Login to Quote 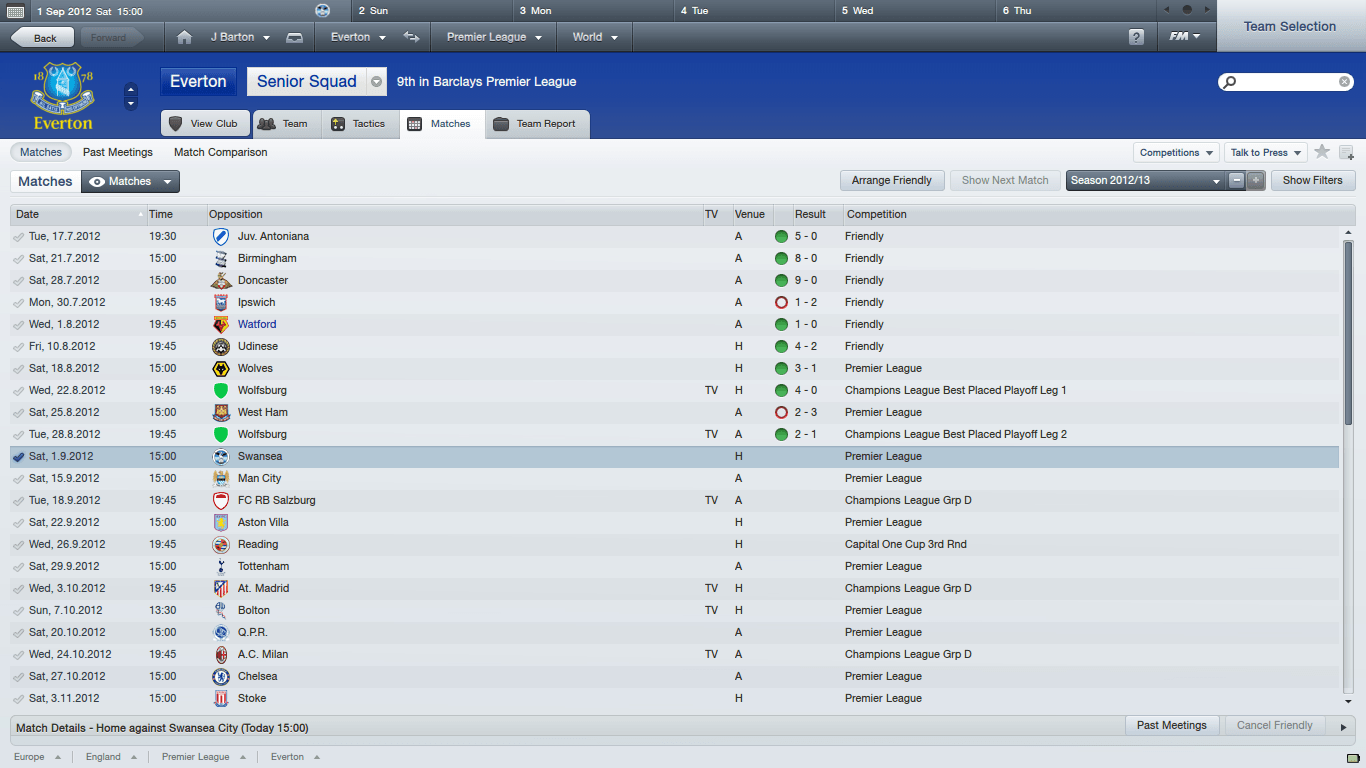 9th in the table but it is still early in the season. 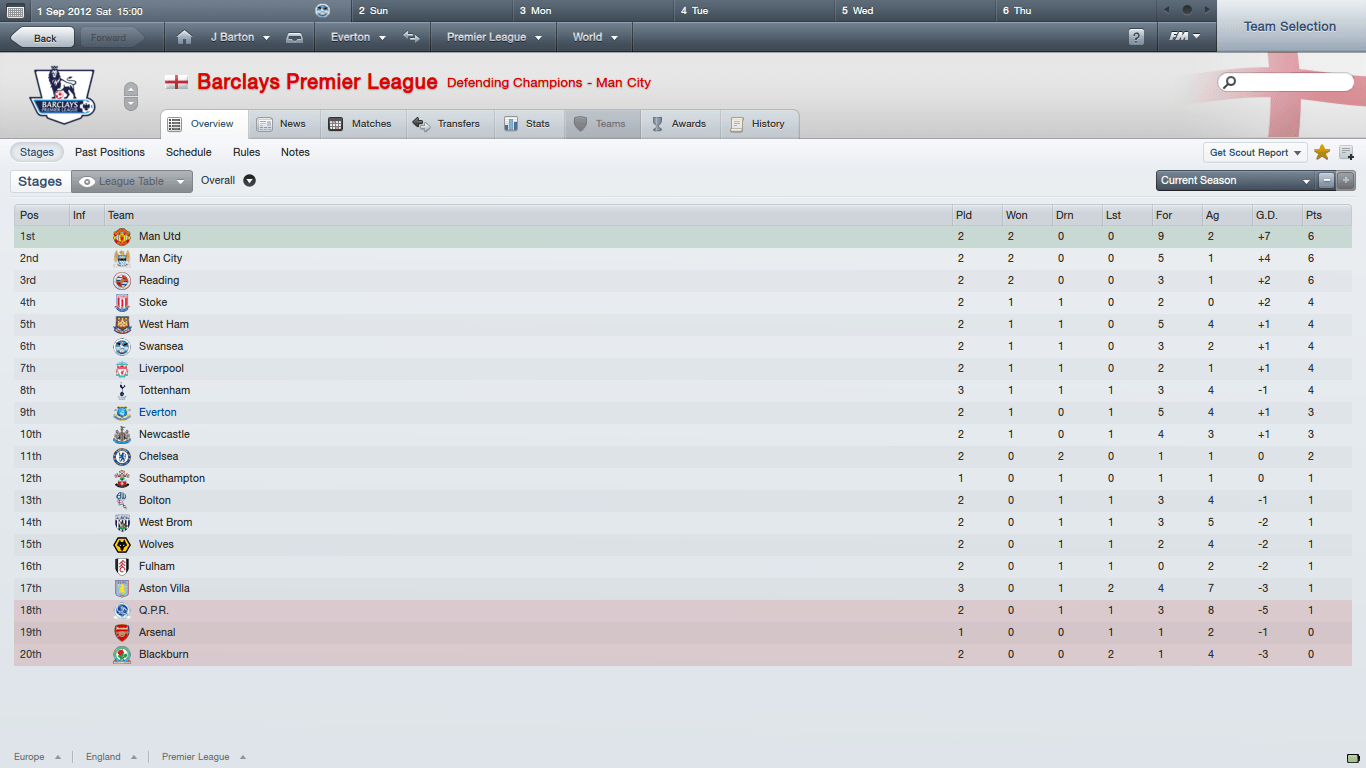 Of course, with August over, it meant the end of the transfer window as well. It seems the changing of managers down at Arsenal has brought a new philosophy. Wenger would never spend this much but Luciano Spalletti has splashed 40M on players this window. 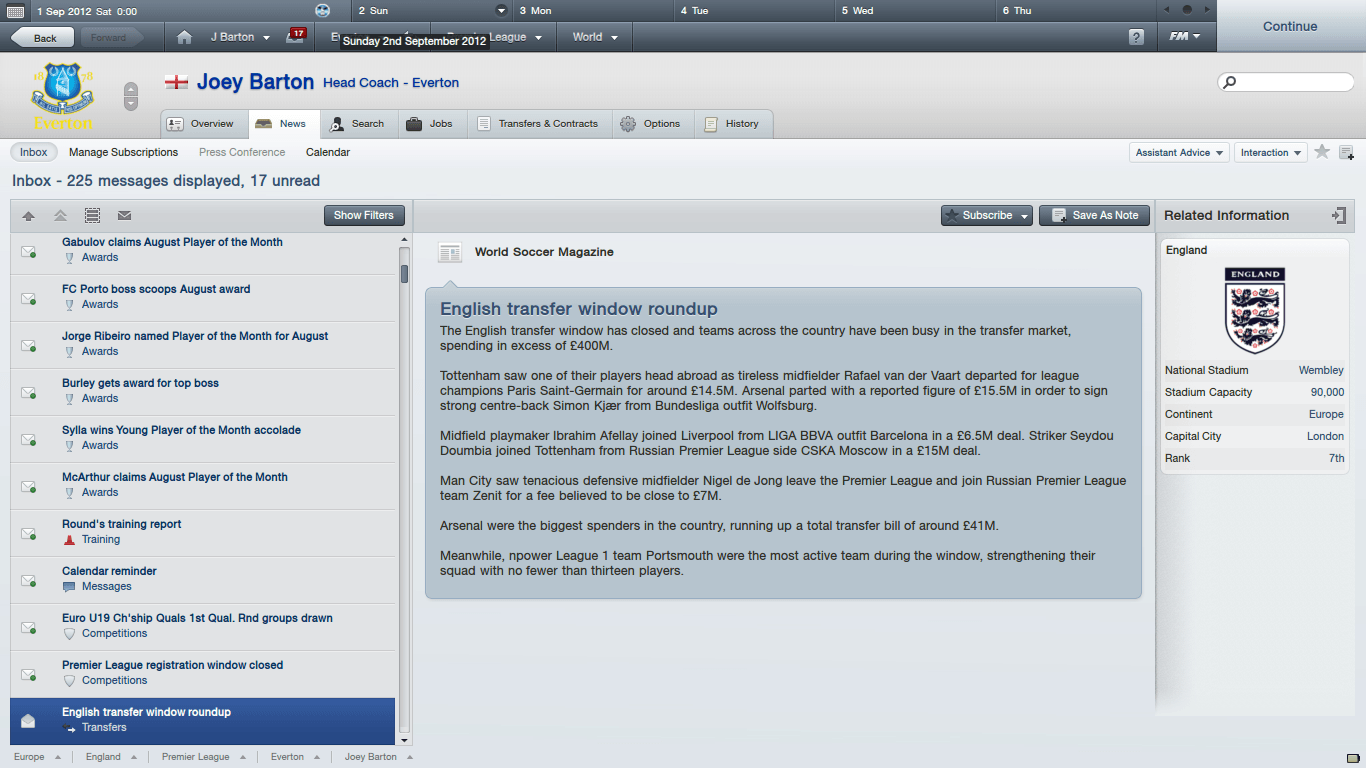 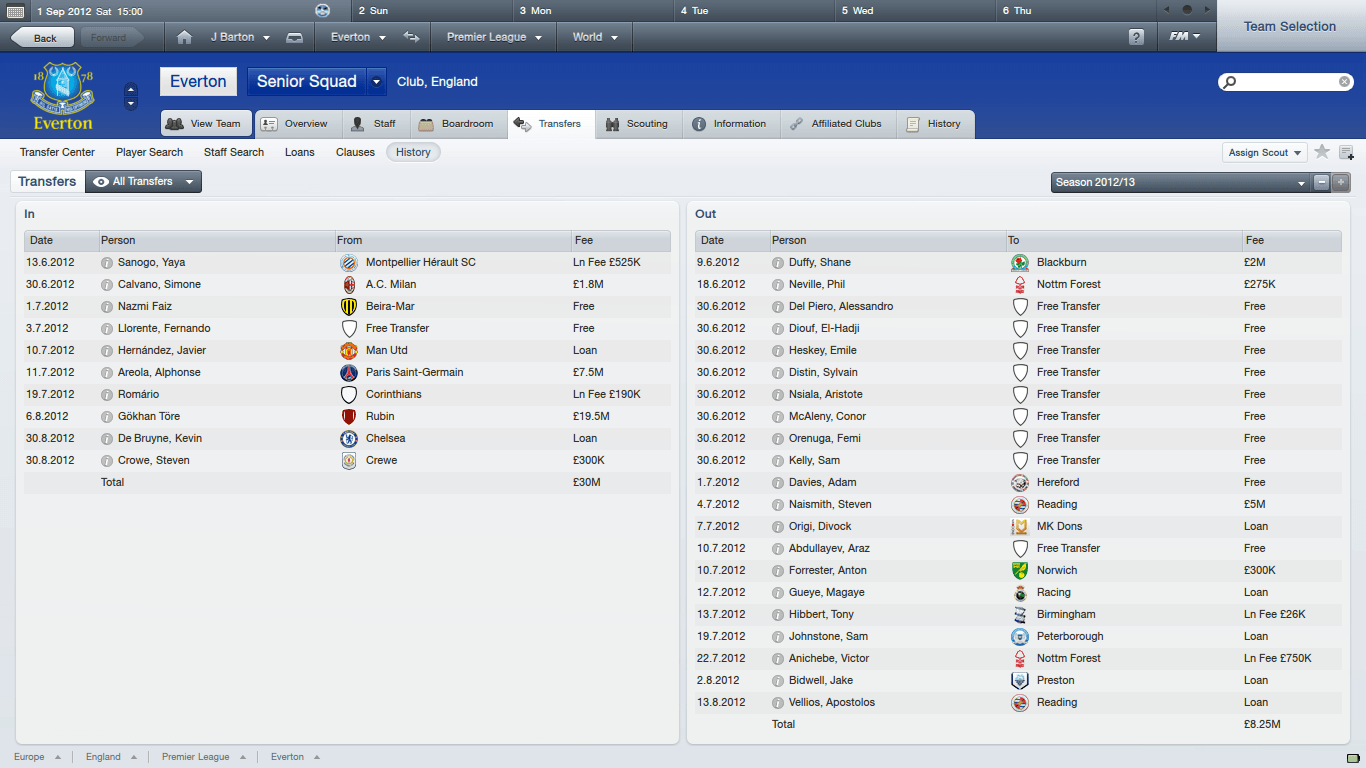