Glenn T
7 years
We opened our Champions' League Group Stages campaign against Salzburg, an Austrian team if memory served me correctly. I opted to start Joshua Prince in central defense, the youngster having joined our U18s in March after greatly impressing the coaches at the academy. Prince partnered John Heitinga in defense and Heitinga took the captain's armband for only the third time, in the absence of Phil Jagielka.

Of course, Prince broke a record. 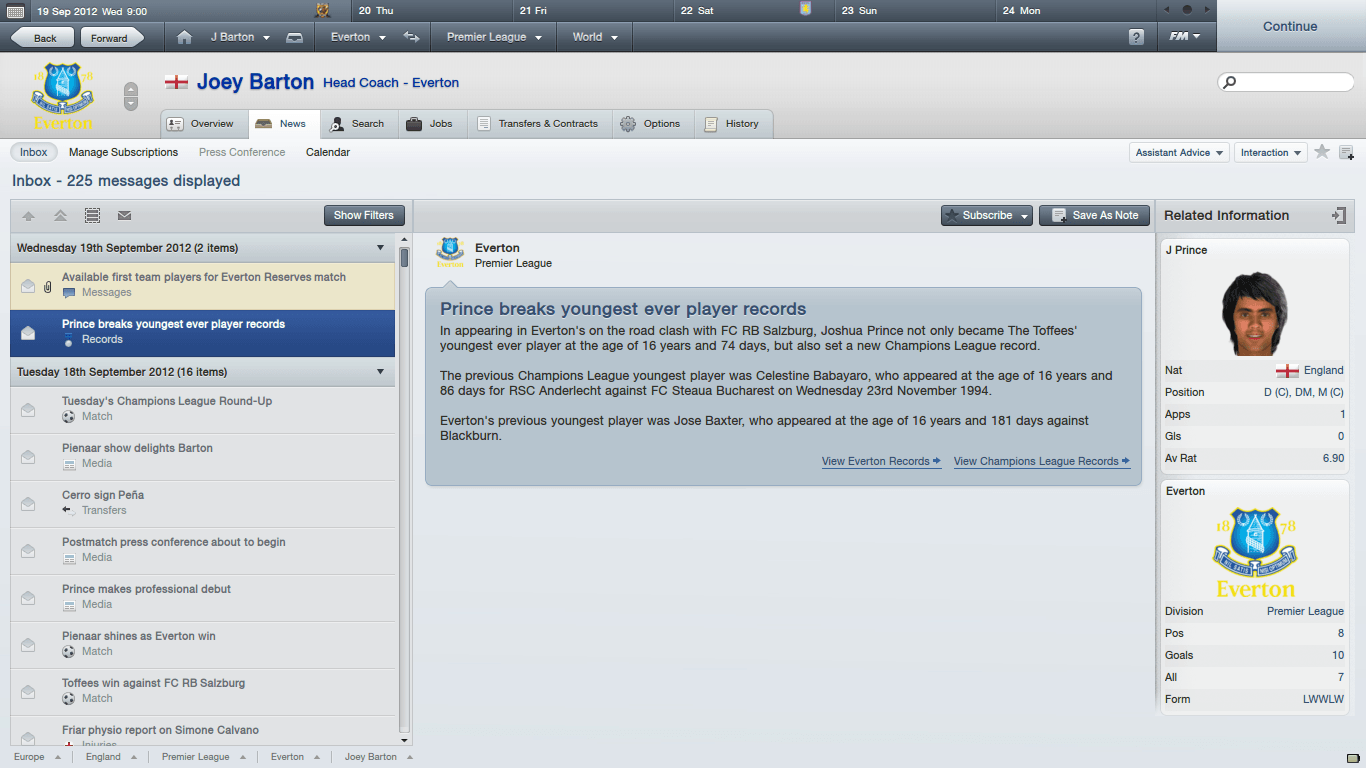 He is a very good, friendly lad and very down-to-earth, and the youth coaches, especially Phil Cannon, are very good friends with him. I can see him starting every week for Everton in about six years' time if he works hard.
Login to Quote

Glenn T
7 years
September
Well, not the best of months, with us only managing one Premier League win. 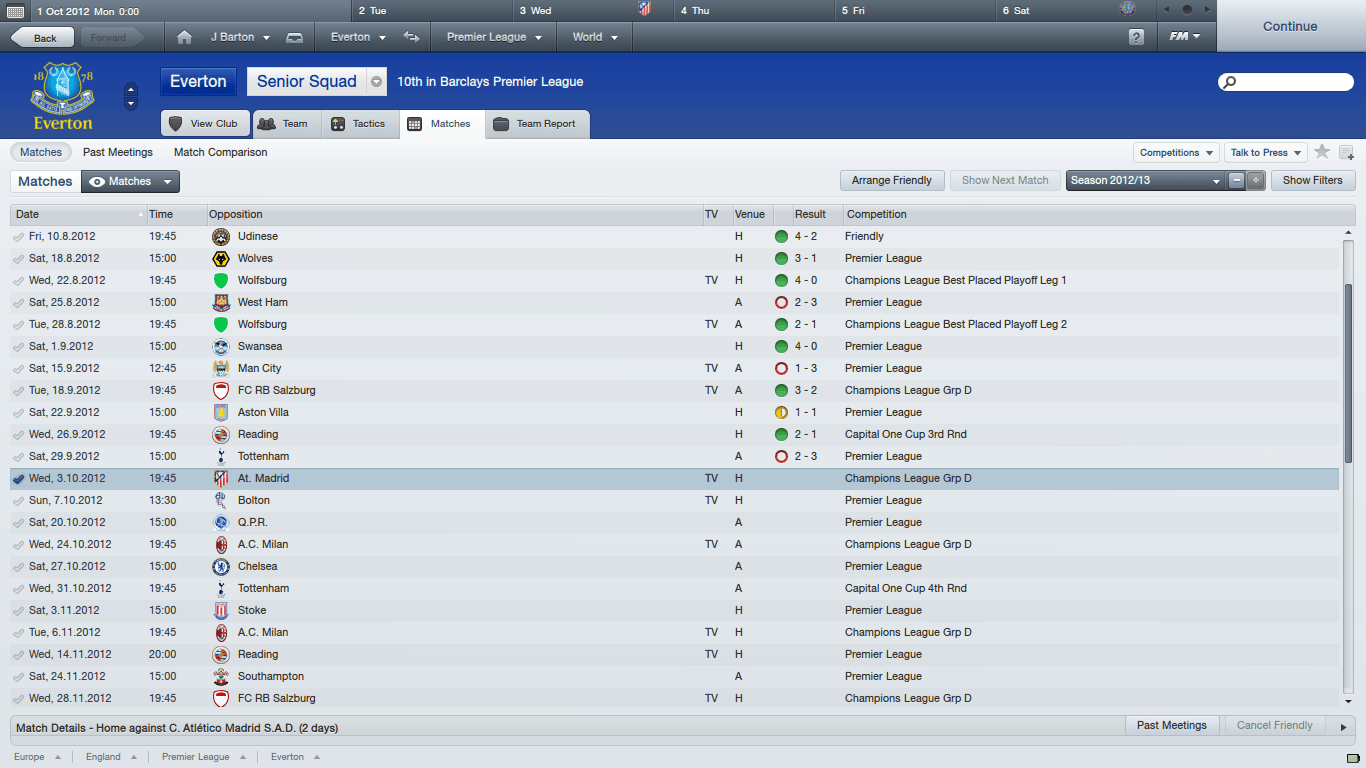 We are a disappointing 10th, but I hope we can improve our position soon, considering we finished 4th last season we are under immense pressure to do the same this year. 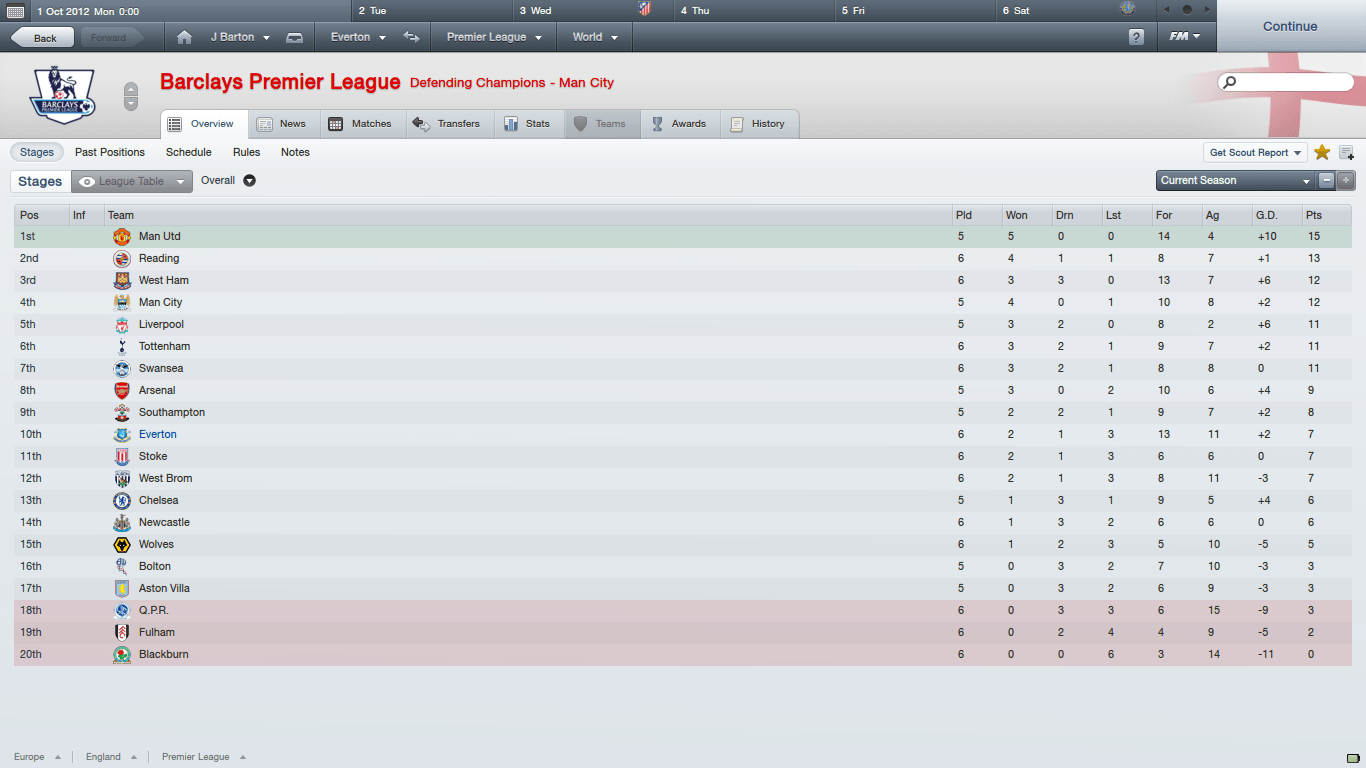 I have looked to give the youngsters I brought in a chance. Simone Calvano, Nazmi Faiz, and Alphonse Areola have all already gotten their first Everton start.

However there are some players in the squad who have found it hard to retain their starting spot. Nikica Jelavic still has the ability to score 44 goals a season but is finding it hard to even make the bench with Fernando Llorente, Javier Hernandez and even Yaya Sanogo in the squad. Anderson and Darron Gibson are also failing to impress in central midfield.

Llorente and Hernandez would be a deadly attacking partnership. Its really good to see an Everton Story - don't think Iv'e seen one before. Keep updating Glenn!!!!!

Glenn T
7 years
I think I might have called in the police! 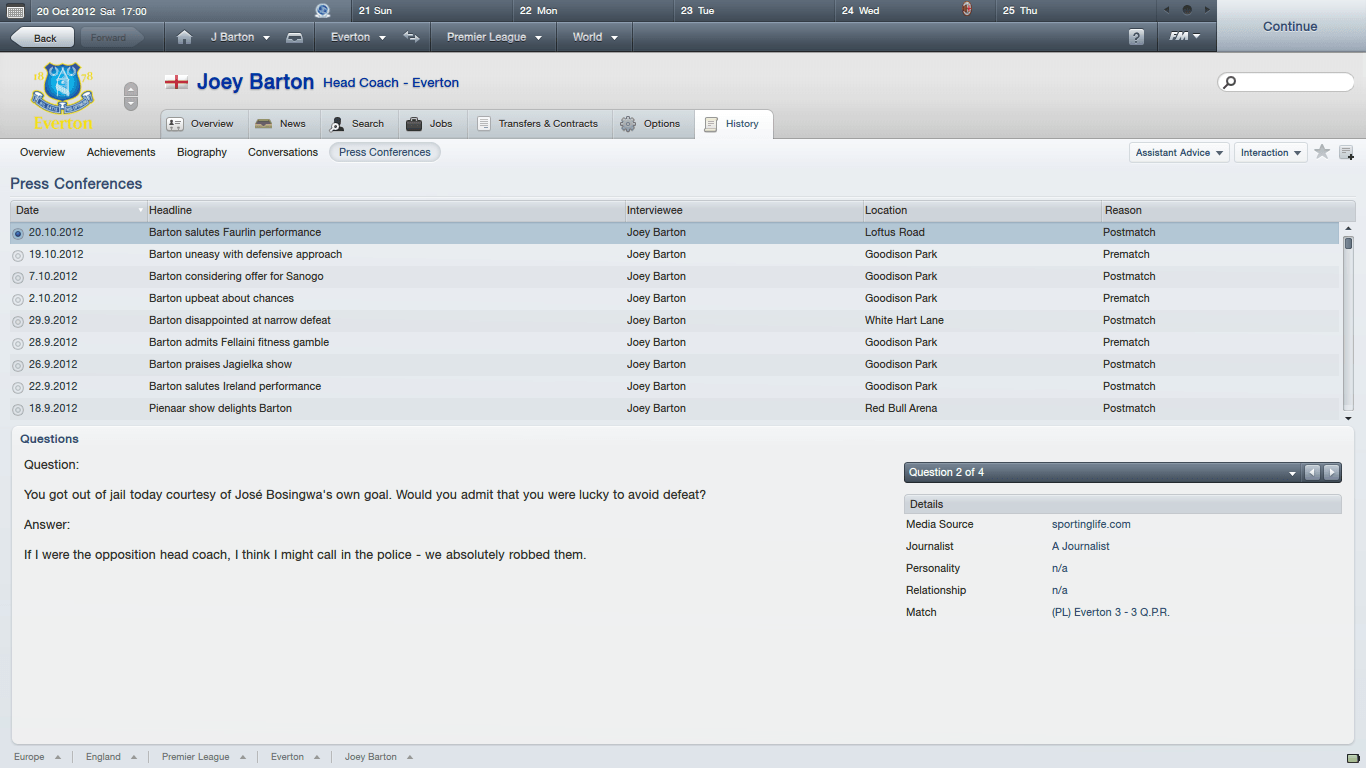 Glenn T
7 years
A few of the boys have pulled me aside in training to tell me exactly what they thought of our recent form, and I can't say I agree with them. I mean, we finish 4th last season, and now this season we are 10th in the table with only 8 out of 38 games played, and they are thinking we are underachieving. I think finishing 4th place last season has gotten into their heads. This is absolutely shit, but I didn't say it outright. I soothed them by saying we will still finish in a respectable league position at the end of the season and it seemed to have pacified them, for now. 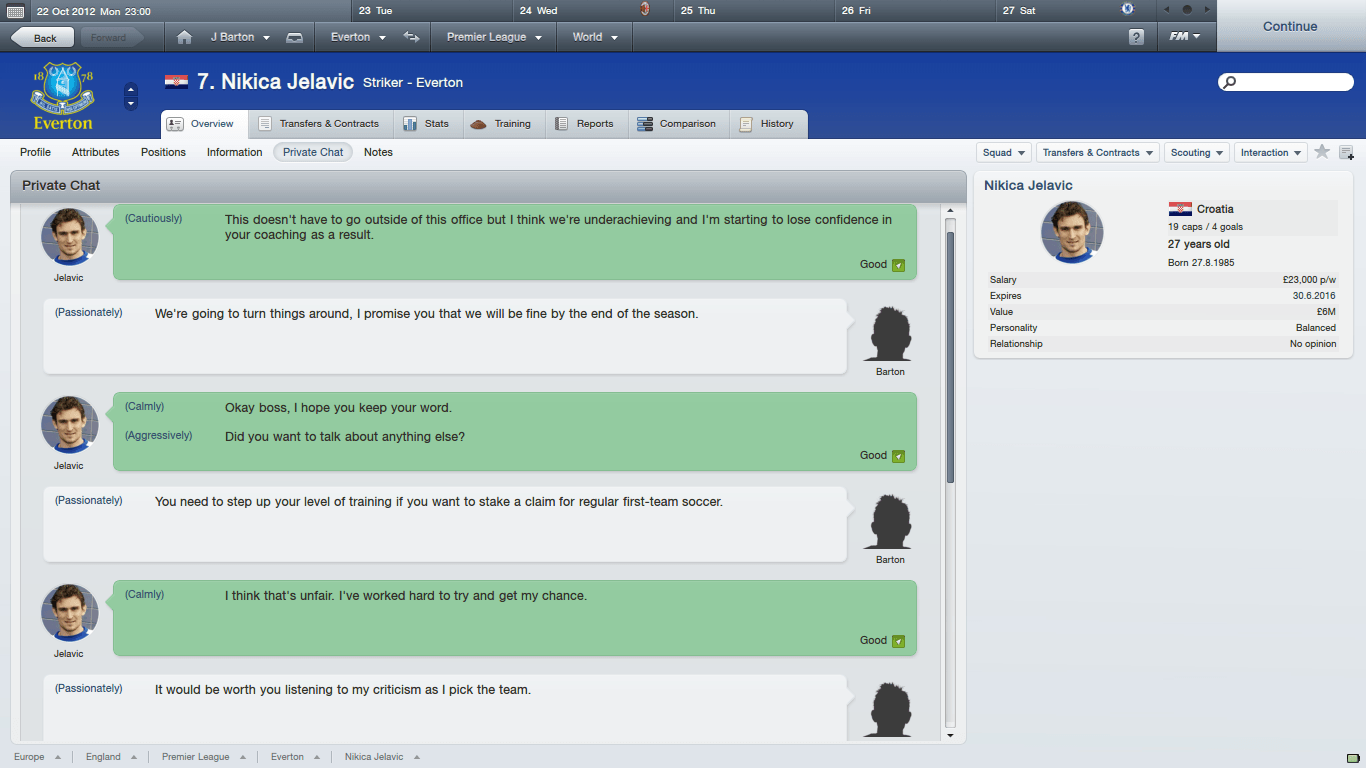 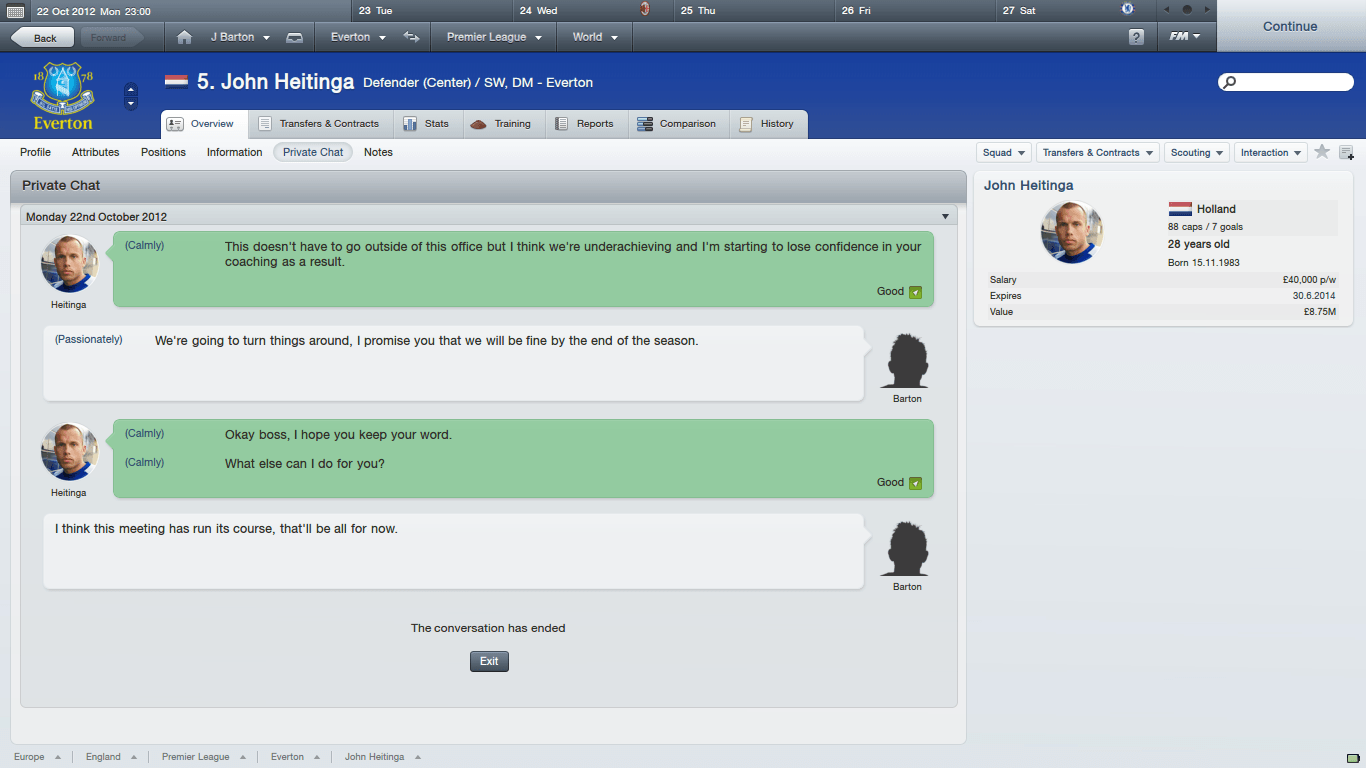 Glenn T
7 years
October
We still need to improve! This isn't the standard we set for ourselves. 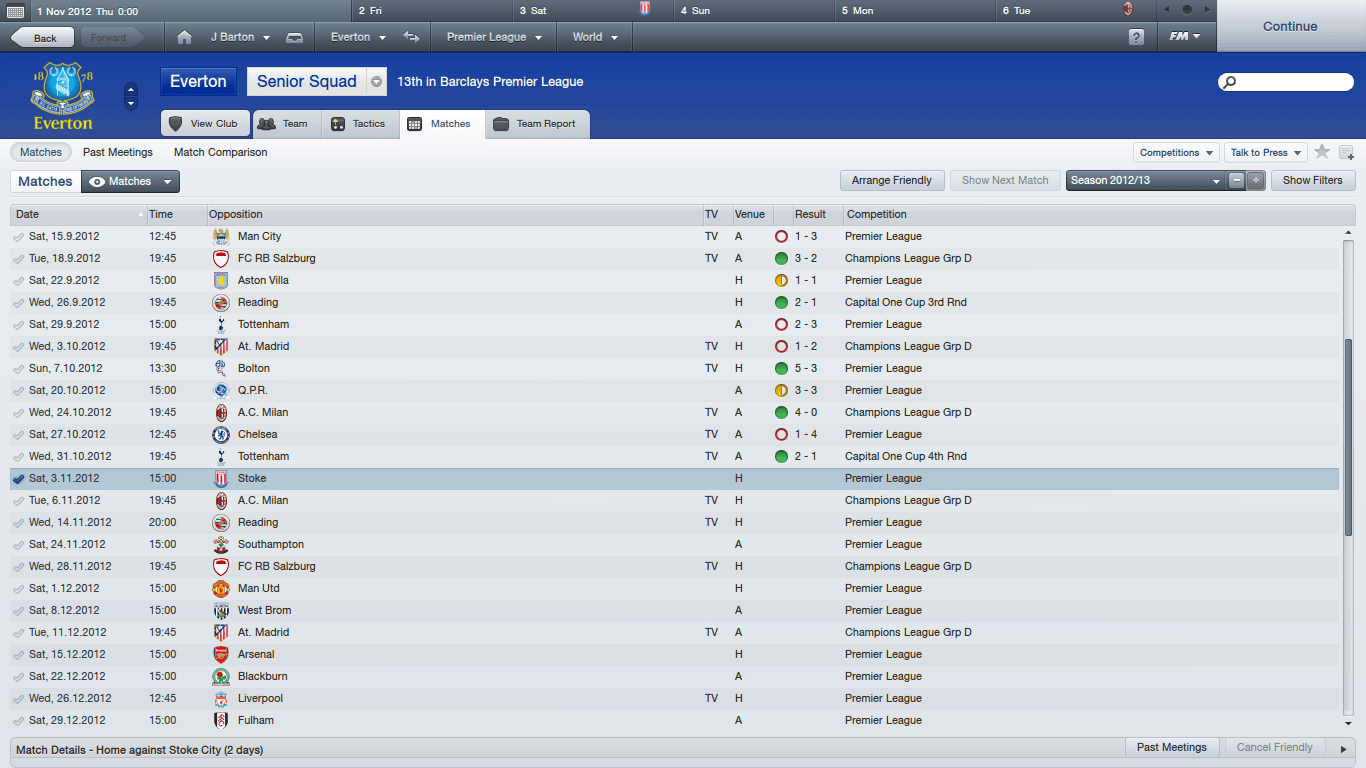 We are still dangling in the bottom half of the table and I think the boys might actually be right. The media are already saying we are underachieving and I know if these results continue, there will soon be speculation about my job. Such is the media. 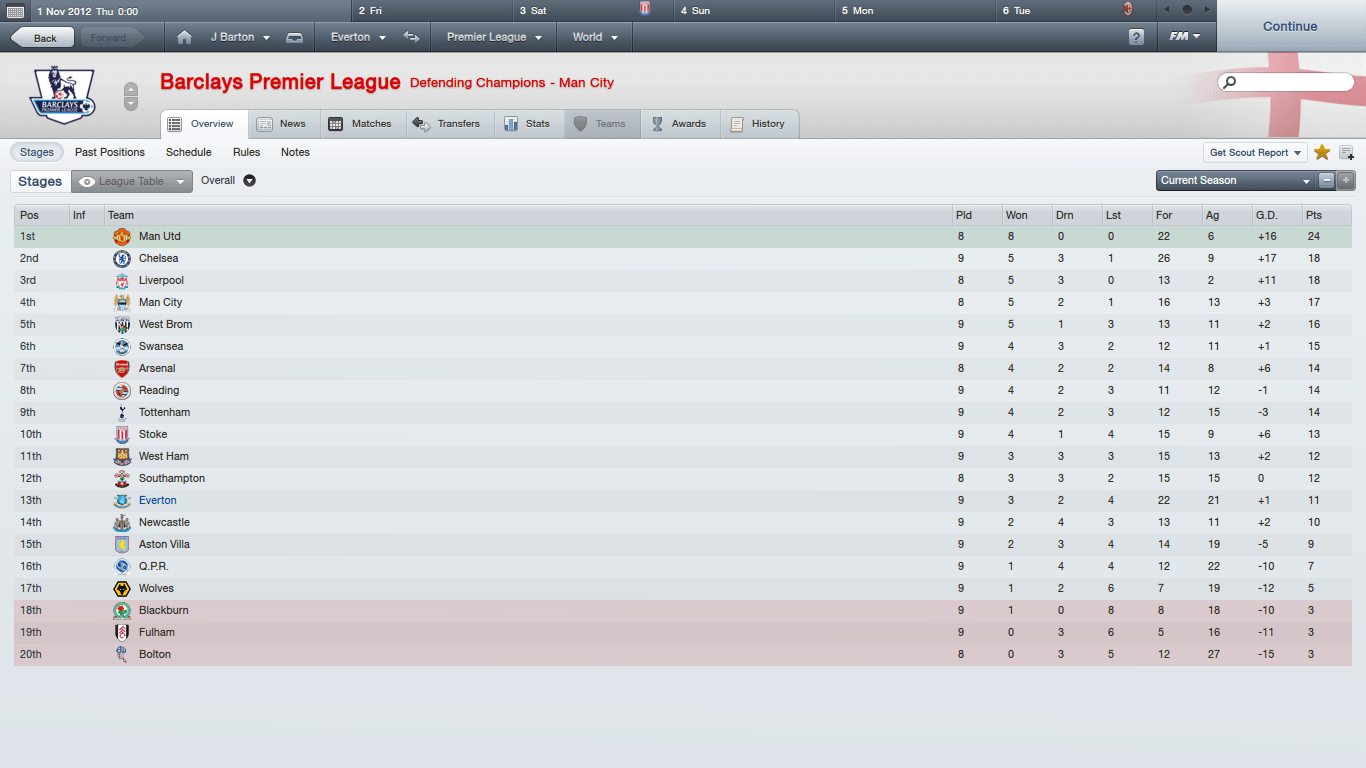 The highlight of the month was definitely a 4-0 thrashing of AC Milan, right at the San Siro in front of their home fans as well. Also, we came back from trailing 1-0 at half-time to beating Spurs 2-1 in the second half, to advance to the Quarter Finals of the Capital One Cup, where we will face Arsenal. Tim Howard later explained to the media that it was my inspirational words at half-time that helped the team record such a comeback. I didn't say anything special really, but it's great that the boys listened. I remember when I was a player and thought pep talks were boring.

Glenn T
7 years
Bill is out of the country for a few weeks and he has sent me an e-mail telling me politely that I had to get some results soon. Uh oh. I am sure I can do that, but uh, just in case, I am going to be on the lookout for new jobs. I honestly expected to stay at Everton for the next five to six years but if that is not to be, well at least I've got a backup plan.

Queens Park Rangers, Reading, FC Twente and Parma are all without managers at the moment, with Reading manager Brian McDermott leaving to take charge of Swansea City while the other clubs' managers got sacked for poor results, something that may befall me soon. Queens Park Rangers interest me a lot, but as I said, I won't be leaving until Bill makes it clear that he wants to terminate my Everton contract, which only recently had been extended until 2015.

A whole lot of the players are losing faith with Steven Pienaar and Emilio Izaguirre coming up and telling me the same things Heitinga and Jelavic told me. This is serious business...
Login to Quote

TheKopDiamond
7 years
You've got some great signings, hopefully they will push for the results you need to get back towards the top of the table. good story so far mate
Login to Quote 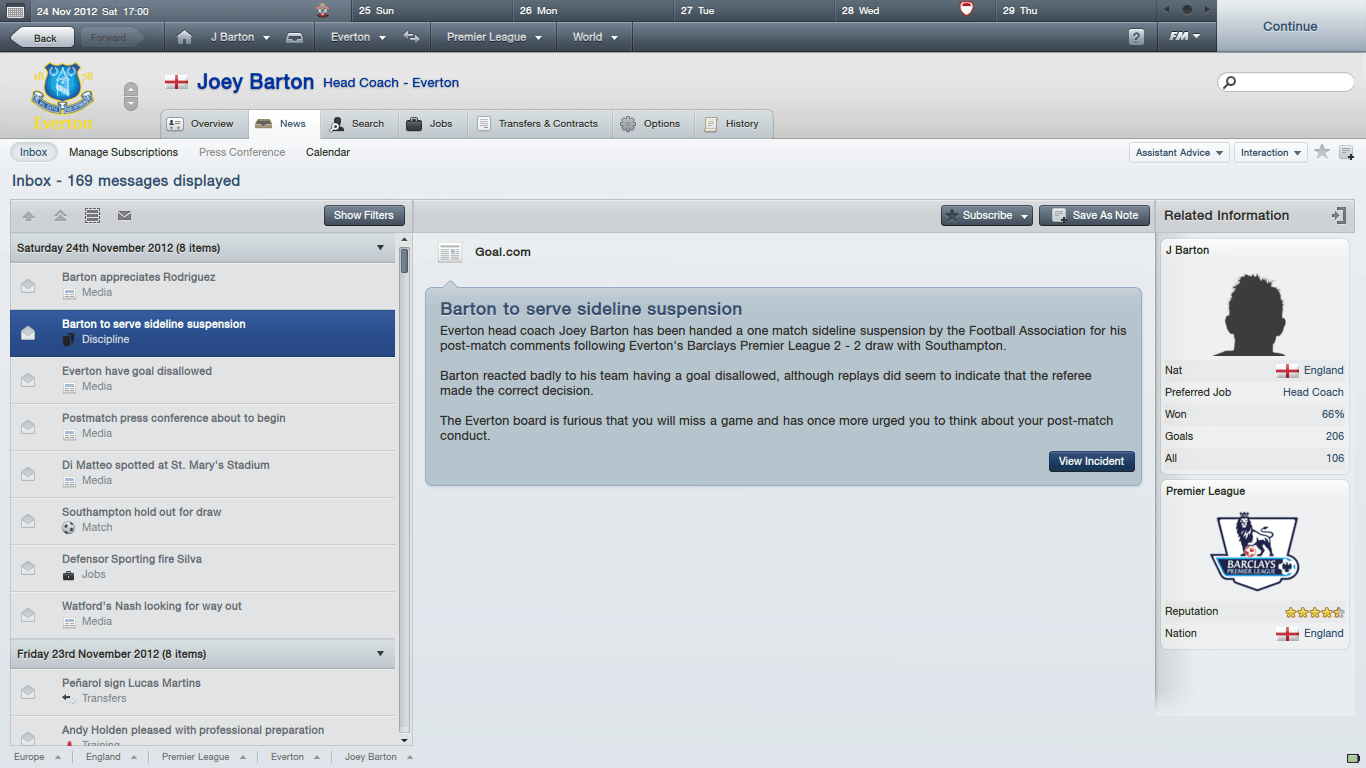 Glenn T
7 years
November
Well, the speculation about the security of my job continues... 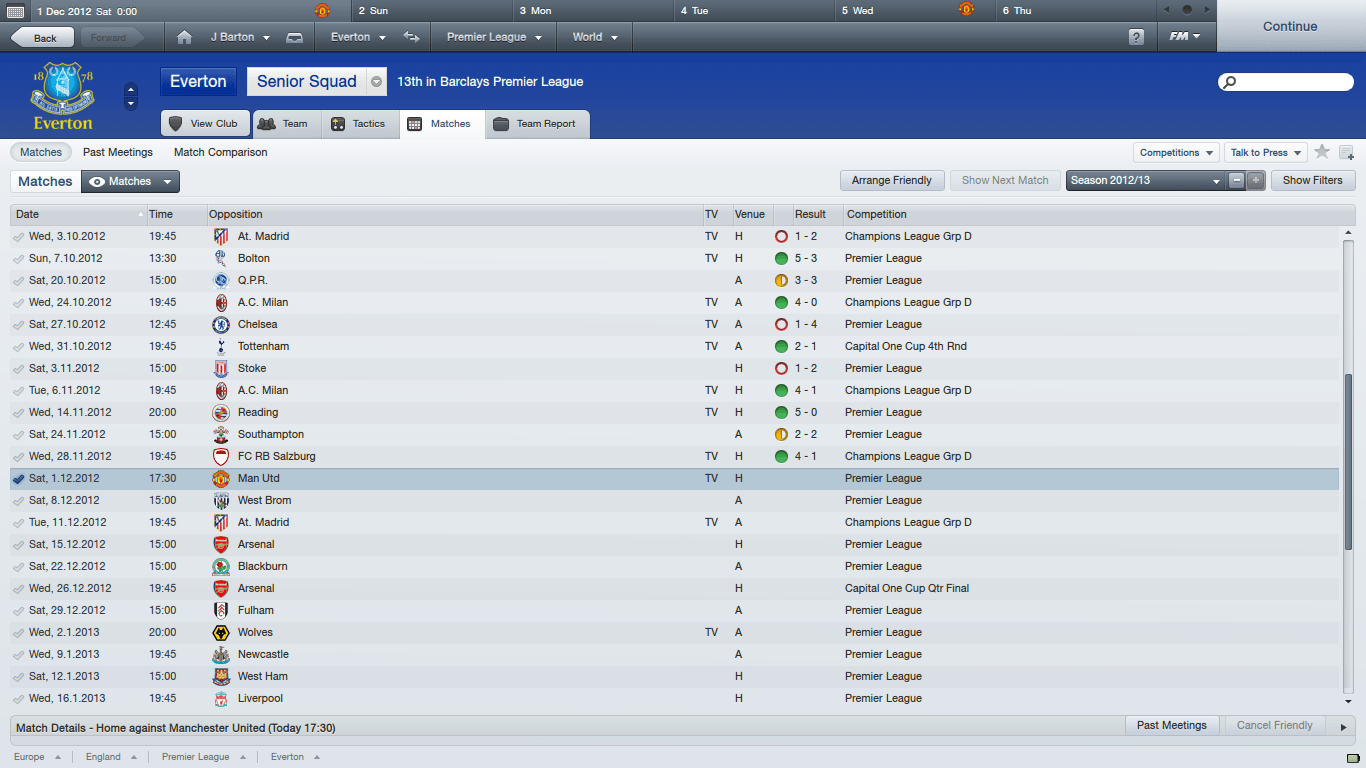 13th in the table and 16 points behind the league leaders... 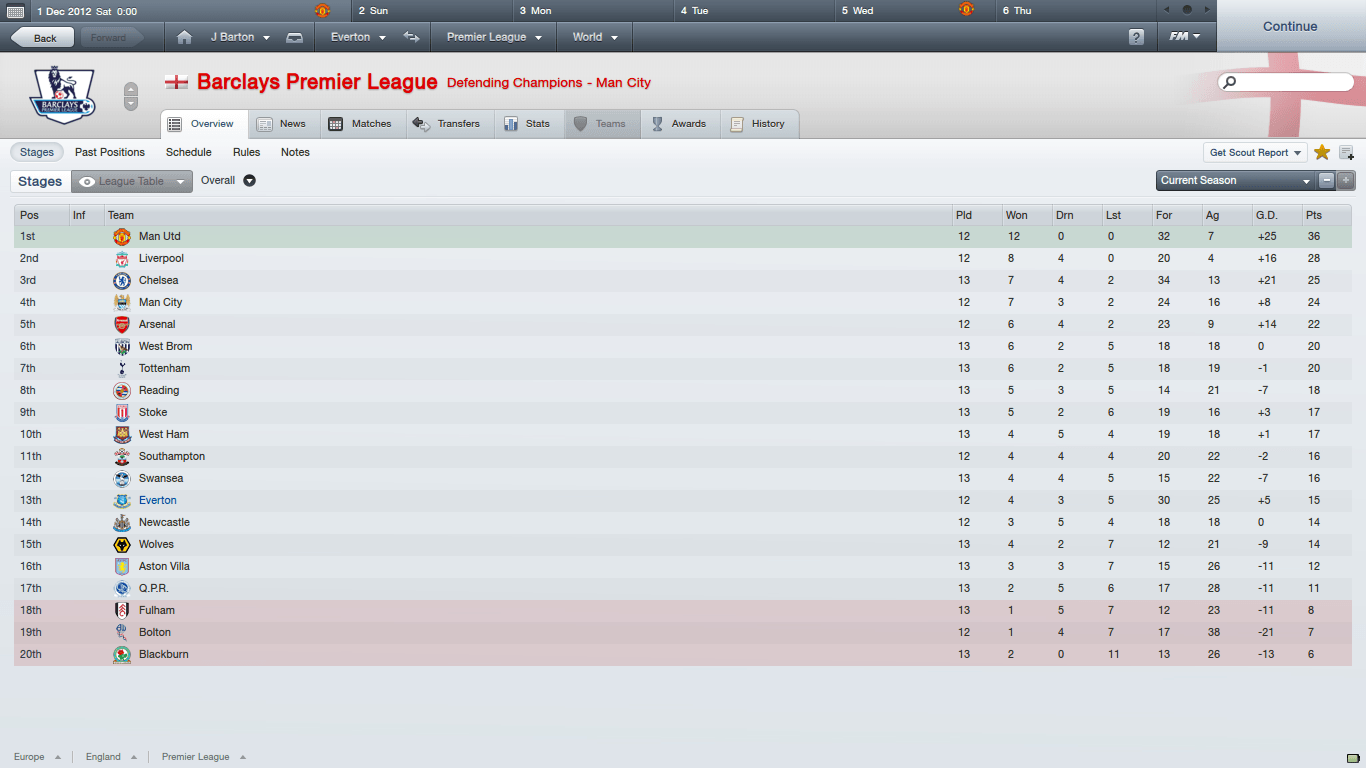 It has been another average month and because of our bad start to the season, we are going to need to have a few "above average" months if we want to stand any chance of improving on our top four position last season. On a more positive note, I have taken Everton to the Knockout Stages of the Champions' League, finishing 2nd in our group with Atletico Madrid finishing 1st. Milan will have everything to be unhappy about after finishing 3rd some way off behind me and unexpectedly Salzburg finished last.

Glenn T
7 years
Darron Gibson and I have had a bit of a bust-up...

He was probably the eleventh f**king player that had come into my office and told me how he thought Everton were underachieving. For f**k's sake, I am the f**king manager and I didn't need none of my f**king players to f**king tell me my managing was shit.

So unlike the rest who came in, I did not pacify Darron by saying that we would turn things around. I instead vented all my frustration on him. 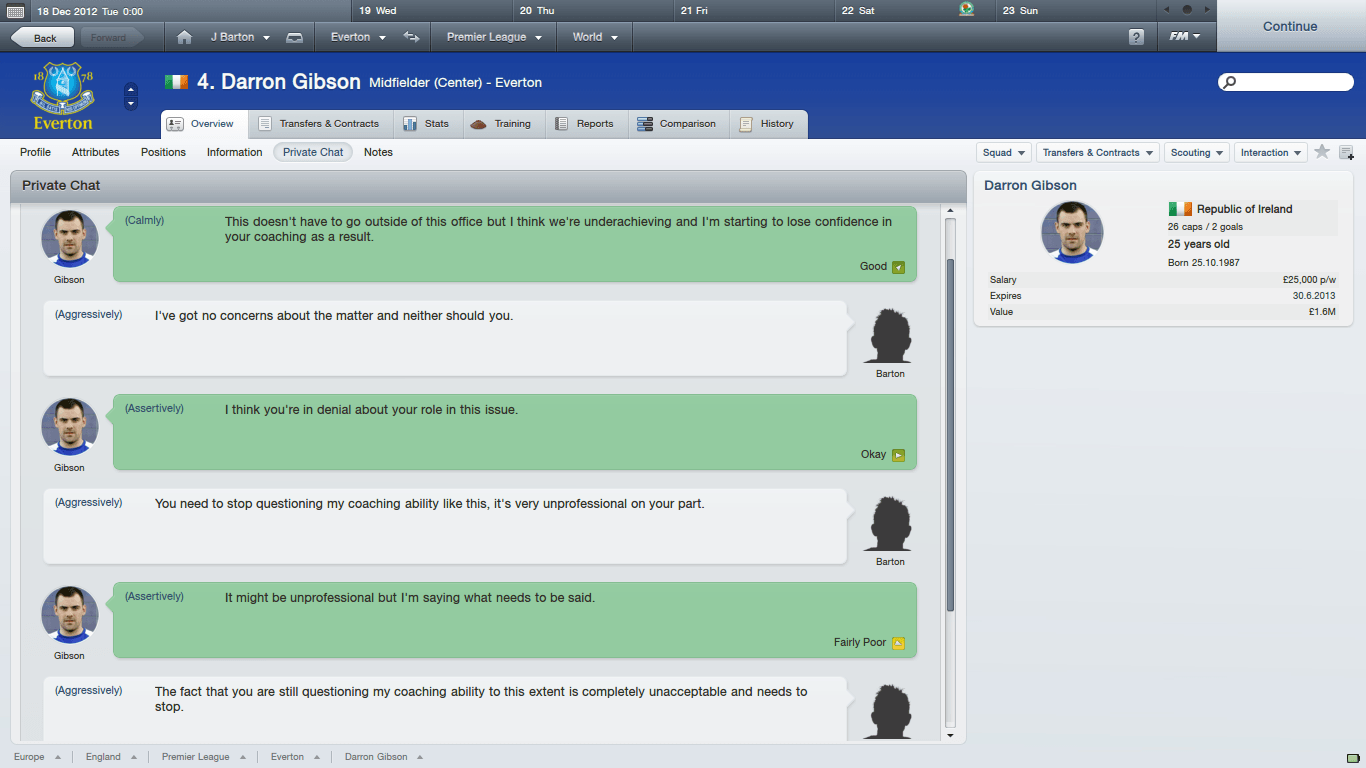 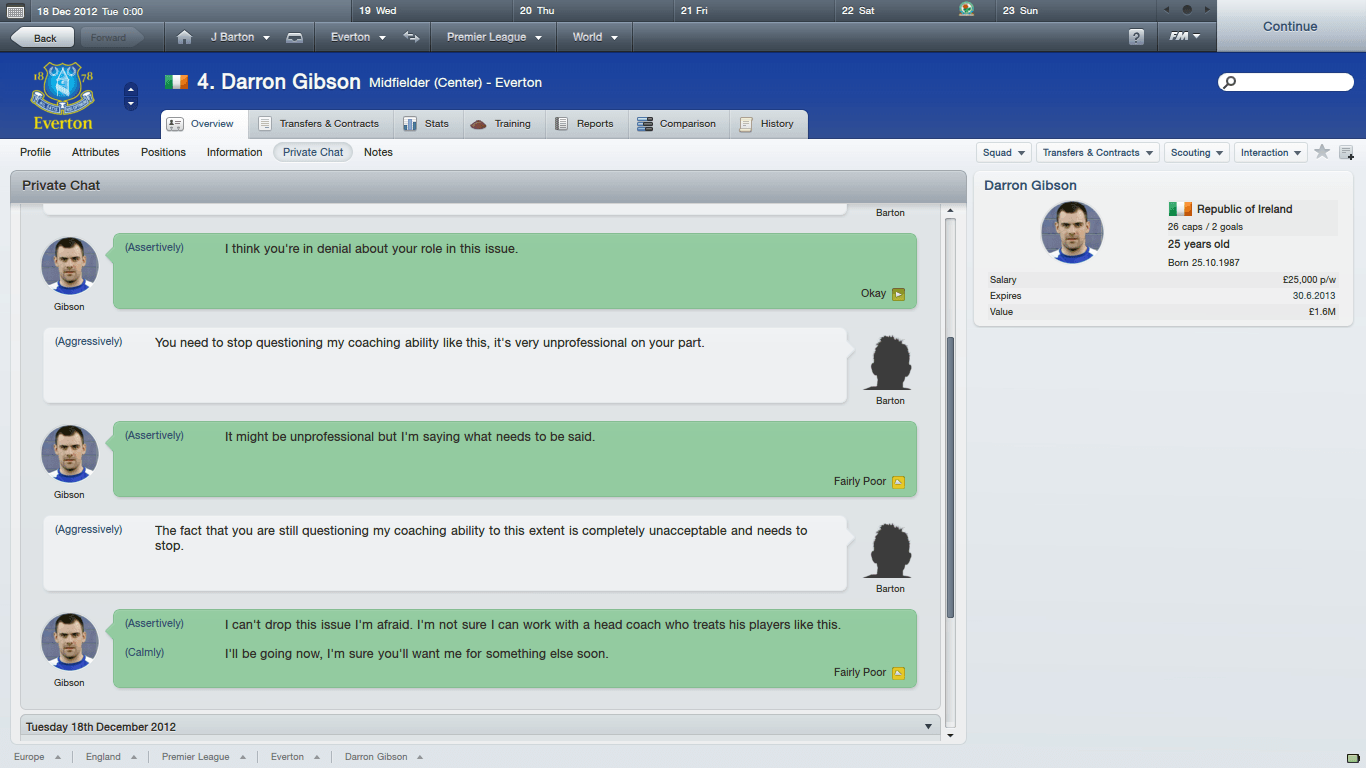 "You can jolly well f**k off!" I told Darron the next day when he came to my office to request a transfer, stating a breakdown in relationship between him and me. "You will leave in January. I don't need a f**king incompetent midfielder like you. You are shit and always will be."

I told him to get out of the office. What a cunt. 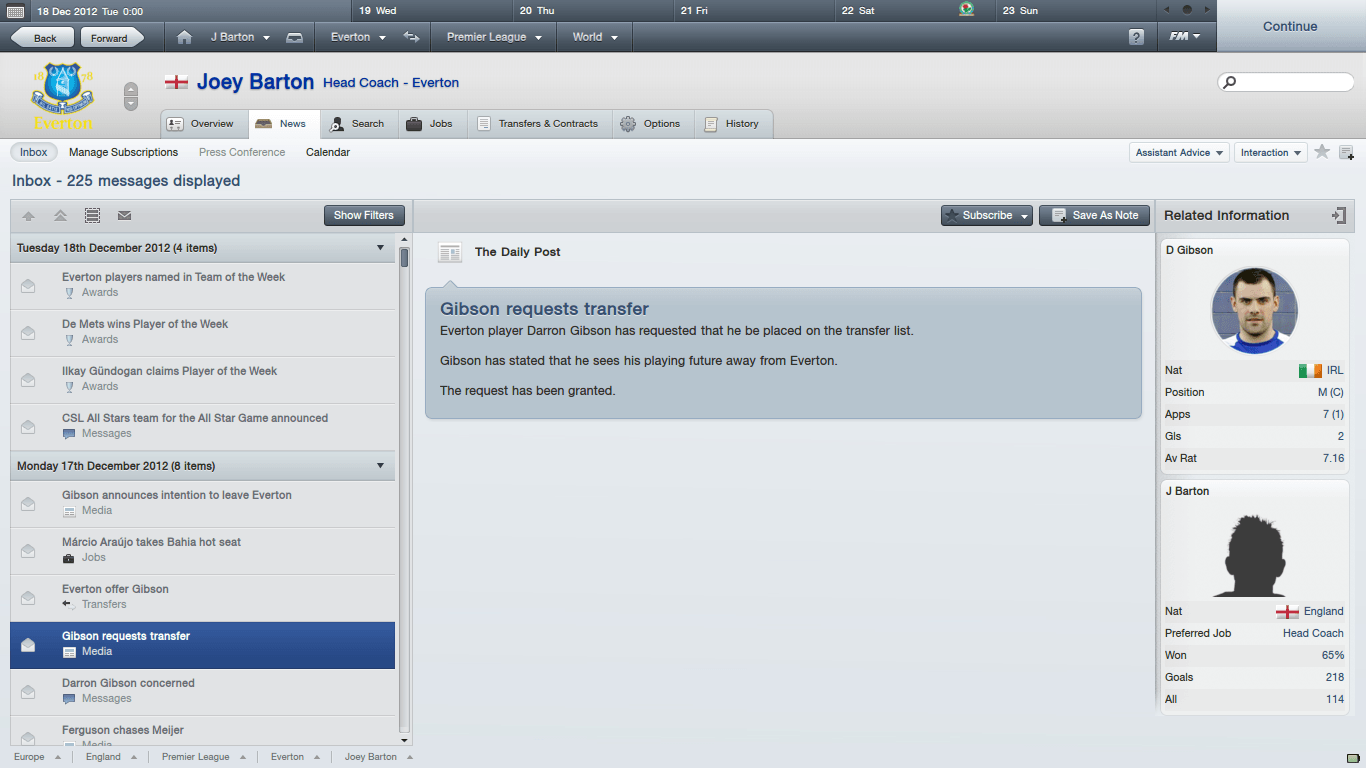 Breaking: Everton's Irish midfielder Darron Gibson has announced his intention to leave the Toffees and embark on a new challenge with a different club. 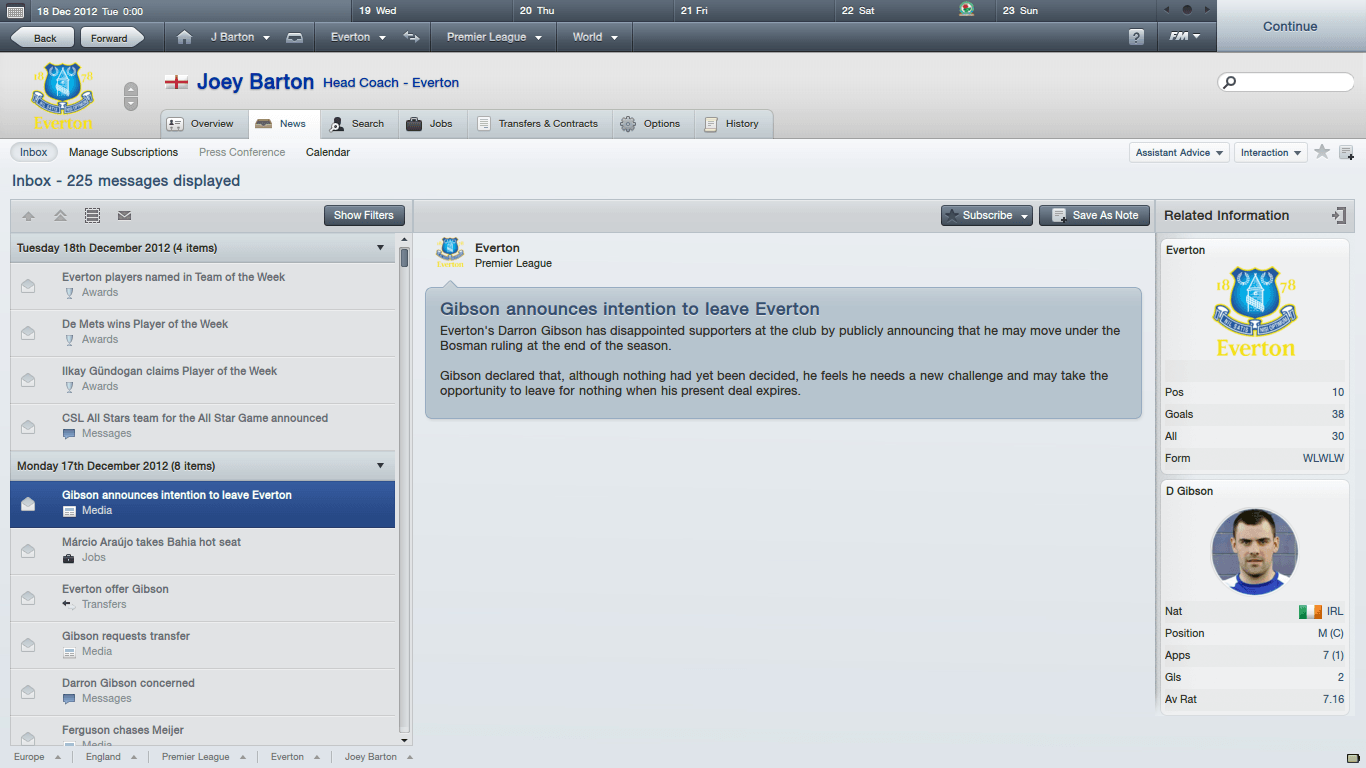 Rumors are going around that Gibson and Everton manager Joey Barton had a furious row within the club and Barton is now prepared to let Gibson leave. The Irish international, who has 26 Irish caps and 2 international goals to his name, had been at Manchester United his whole career, until former Everton manager David Moyes signed him up for Everton and he linked up with the Toffees for just 500k last summer, a few days before Joey Barton was appointed as the new boss at Goodison Park.

He has been unable to hold down a regular spot in the first team but has still been solid whenever he was called upon, making 25 league appearances for Everton last season and bagging 7 goals and 6 assists as Everton coasted to the top four. This season, Everton has been less spectacular and sit 10th in the Premier League, collecting 21 points from 15 games.

Everton and Darron Gibson have both declined to give comments on the matter, but Joey Barton has wrote on the Everton website, telling Toffees fans, "I can confirm that rumors of Darron wanting to leave is true. He requested a transfer himself and we will be looking to sell him in January. There are already several clubs showing a serious interest in him and I'm certain Darron will leave before the expiry of his contract this summer."
Login to Quote 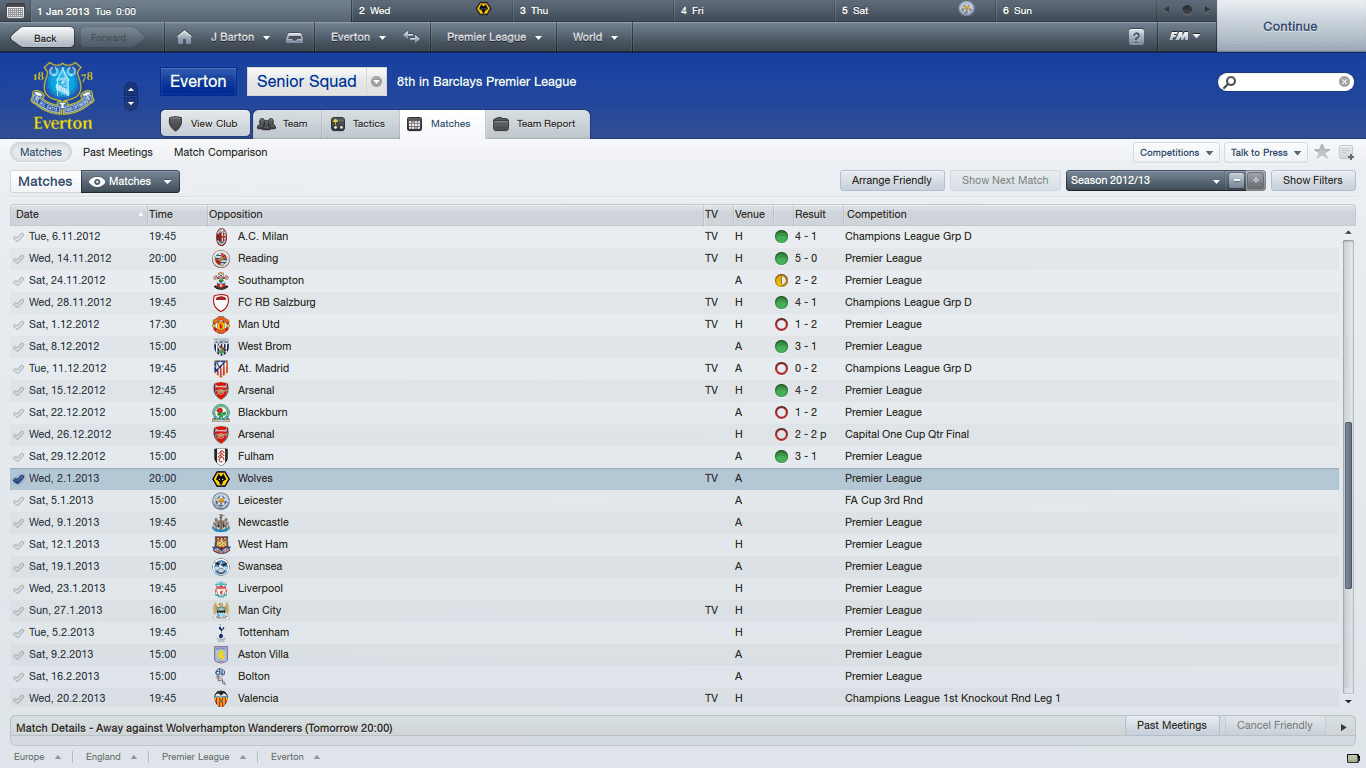 We are gradually improving... 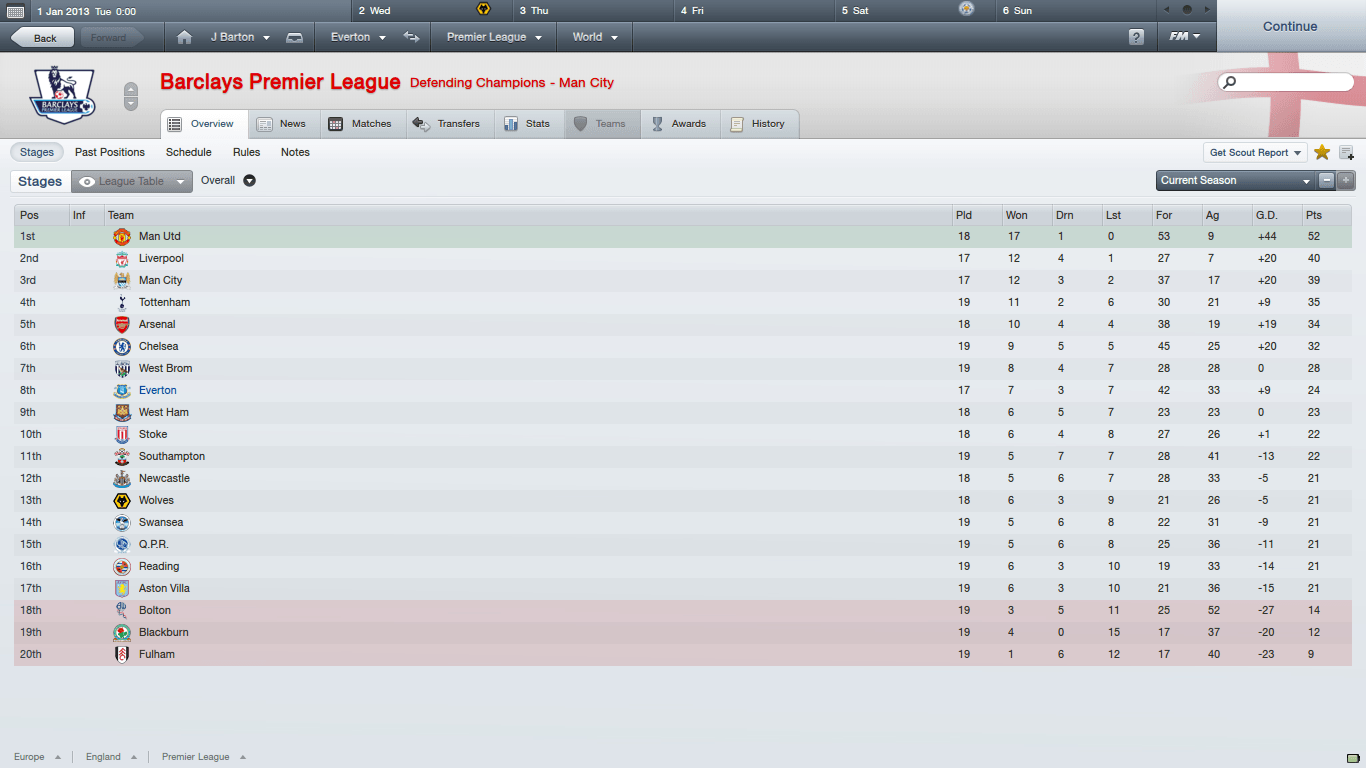 We got knocked out of the Capital One Cup on penalties against Arsenal, which was a bit annoying. But we are still in the Champions' League, and I am hoping to get as far as I can to boost my job security.

Glenn T
7 years
Messi wins it... again! These few years I don't even look at who's won it, I just look at the runners-ups. 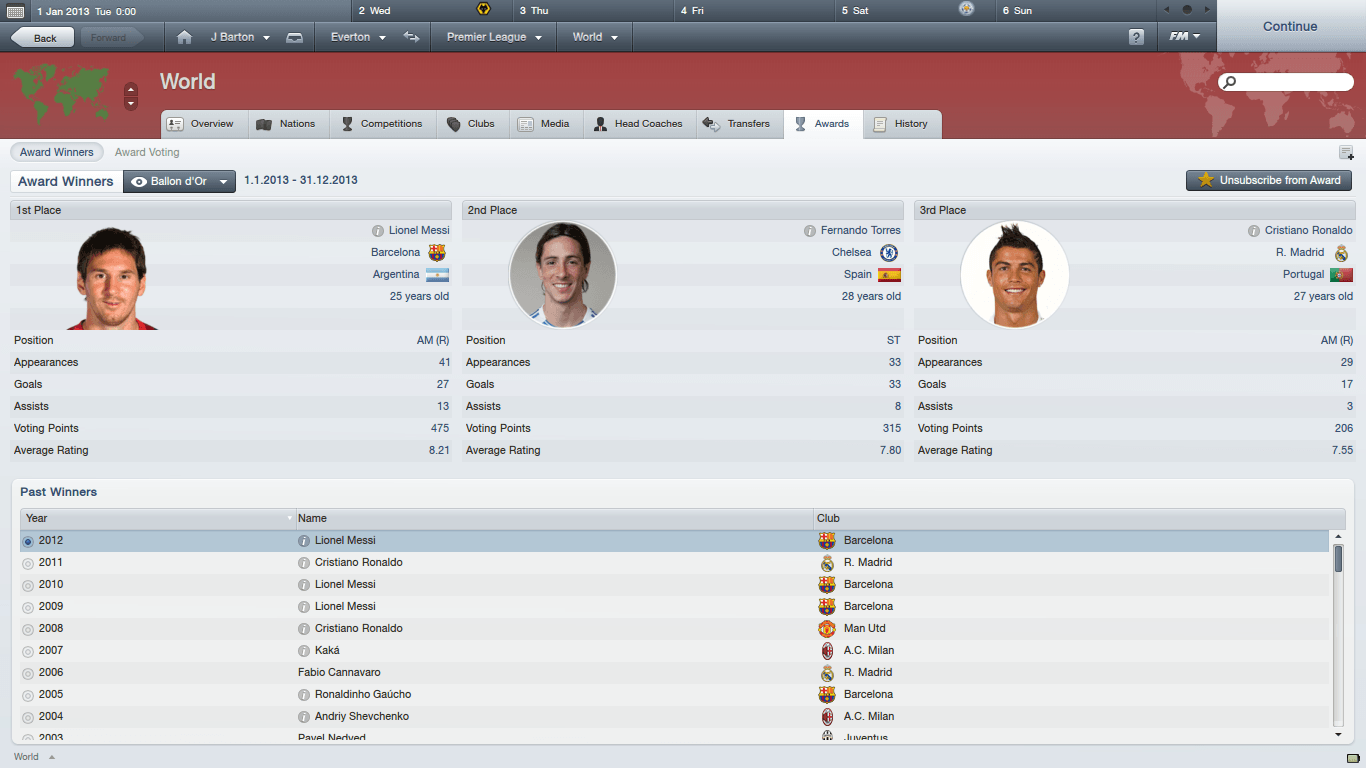 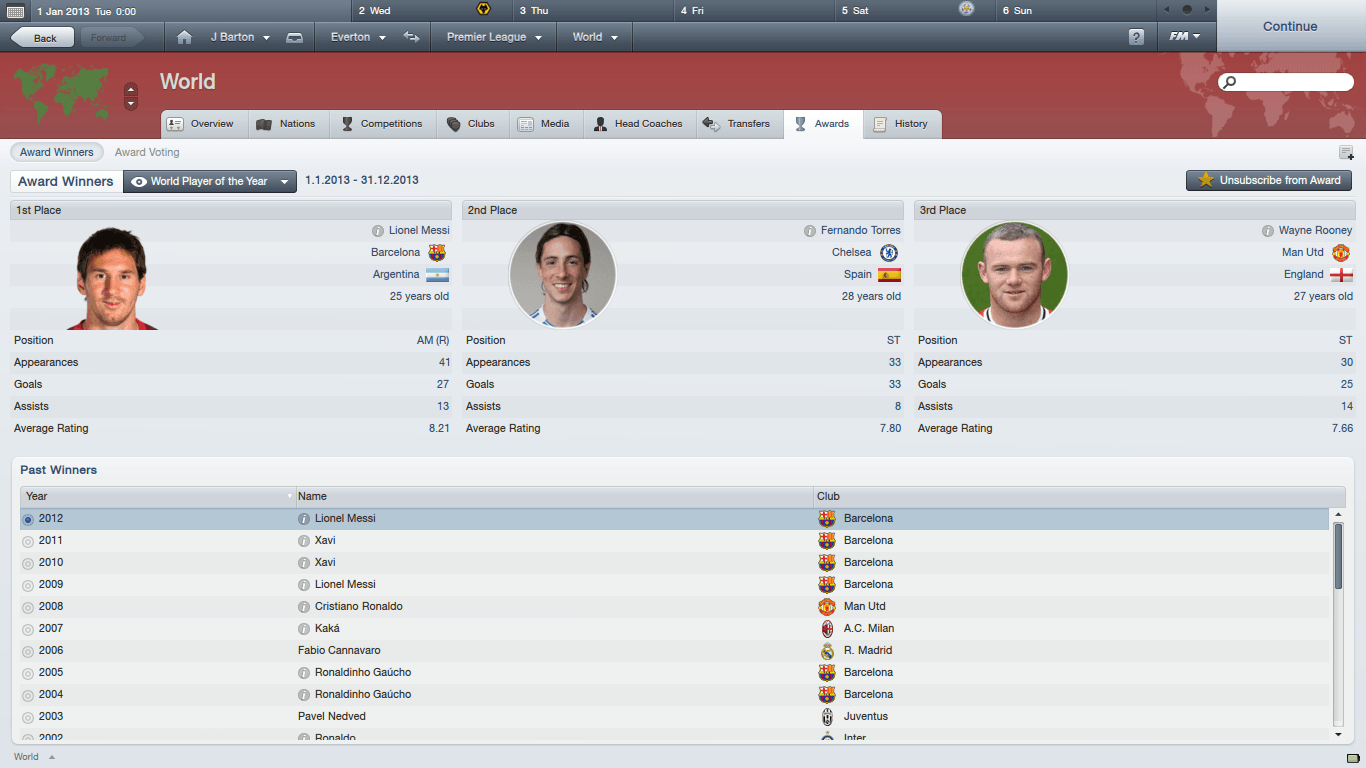 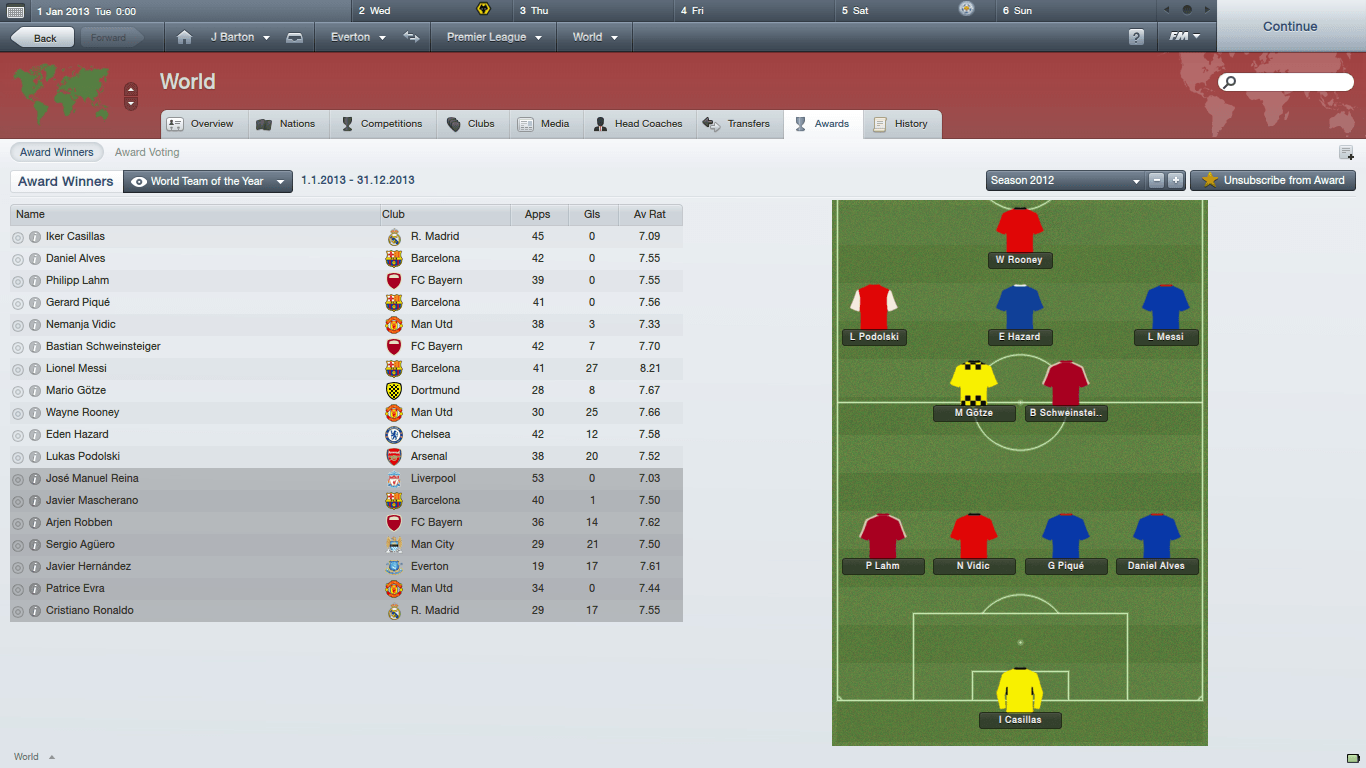