After securing the treble, we had to finish the league season and continue our European campaign. How did we fair in Europe? Did we gain any more points? Here we go:

We finished our league season in style, winning the the remainder of the games and not conceding in the last four. We also played very well against Marseille and we were unlucky not to get a result from that game. Our goalscoring record was good this month.

Jerry Voutilainen steals the Player of the Month award off of Dubois as Jerry went from strength-to-strength, giving performance-after-performance. He scored two goals in a month where he was crucial in our quest to keep our run in the Veikkausliiga unbeaten. 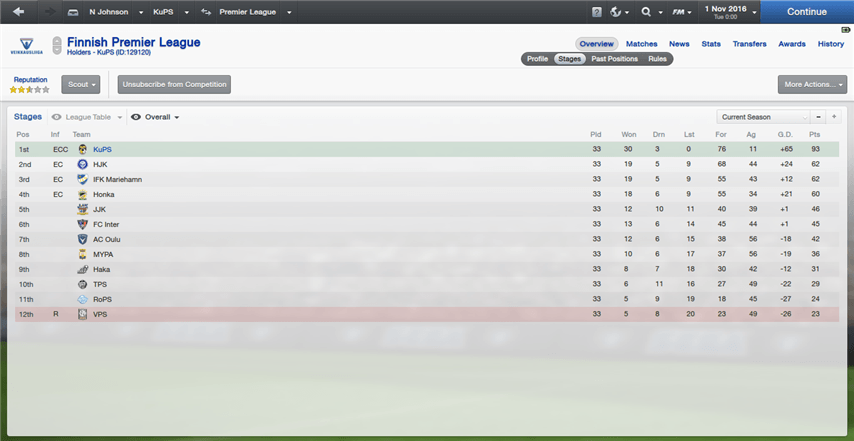 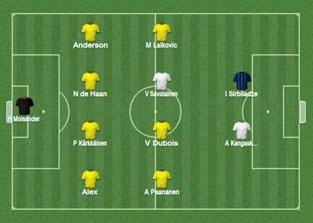 We have these three final games to end the season. Hopefully we can finish third in our group to qualify for the knock-out stages of the Europa League.

So, this is it. We have three more games this season. Until next time, stay tuned!
Login to Quote

Blue
9 years
You won the league by 31 points! WOW!
Login to Quote

it should have been by 37 points

Arvind
9 years
How is it humanely possible to sack David Moyes?
Login to Quote


Fergie Time ran out, bound to find something strange every now and then

Maldini: "Johnson Is The Special One"


Maldini: "I have known Nick Johnson for a very long time now. Ever since he managed to get his KuPS side the win over Werder Bremen in his first season in charge, I knew he had something special. His achievements so far are exemplary and deserves world-wide praise.

Johnson is the master tactician. It is not easy to change a team's tactics without upsetting the flow. However, Johnson proved us all wrong. His KuPS were originally playing in a very aggressive 4-2-3-1 but he changed that to a tiki-taka 4-6-0. Since then, the results he has gaines have been nothing short of spectacular. He has reached the Champions League Group Stages three times in a row with a team which was unknown to the world of football before-hand.
His tactics have ripped teams to shreds with Fenerbahce being their latest high-profile scalp.

I don't think that anybody can doubt Nick Johnson's proffesionalism. Despite all of the things that have happened to him outside of football, he has stepped up and produced magical results time and time again. He does not let anything get in his way when it comes to football. He is the master.

Everybody knows the likes of Jose Mourinho, Sir Alex Ferguson, Arsene Wenger, Carlo Ancelotti, Giovanni Trappatoni. These managers helped shape the game as it is today. But Nick Johnson is breaking all those rules. He as shown us that there is more to football than reputation and media expectations. He knows how to fight, he has that passion. He has that never-say-attitude. And that is why Nick Johnson is The Special One."


A little video I found of Paolo Maldini (dedicated to or.dabool)


Greetings my fellow FM Scout-onians. I have my last update of the season for you! We had three more games to play, all in the Champions League. We were hoping to secure a third place position but could it be done? Here we go:

I was happy with our performances in these three games, even if we did not win any of them. We were very unlucky to not claim the win against Fenerbahce. If it wasn't for Kolarov's ability to produce something out of nothing, we would have claimed our second win of the group stage.

Matthieu Vigouroux is my Player of the Month, despite conceding eight goals. He produced some amazing saves to keep out the shots of Europe's elite strikers. He is one of Europe's top young 'keepers and he was an amazing capture, considering I got him for free from PSG (who deeply regret letting him go).

We made a huge statement to the world of football this year. We proved that even a Finnish team can beat the European giants. My next post will be the Season Review. Until then, stay tuned!
Login to Quote

JasonRM
9 years
Tough this month, but great job with the draw against Fenerbahce.

Next year, you'll definitely be in the Europa League knockouts at least. Good Luck

Next year, you'll definitely be in the Europa League knockouts at least. Good Luck

That's the plan for next season

Blue
9 years
Poor last month, but it can't be helped. Great season, I hope for more of the same next season!
Login to Quote

Jer
9 years
If nasty Kolarov wouldn't have scored that goal, KuPS would be in EL! DAMN YOU KOLAROV!
Login to Quote

There was only one target for me in the league and that was to win it comfortably. 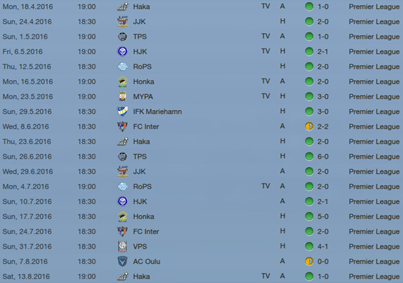 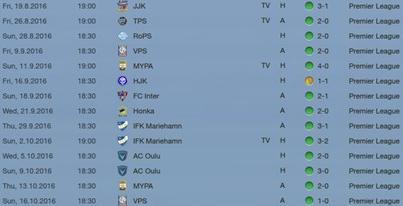 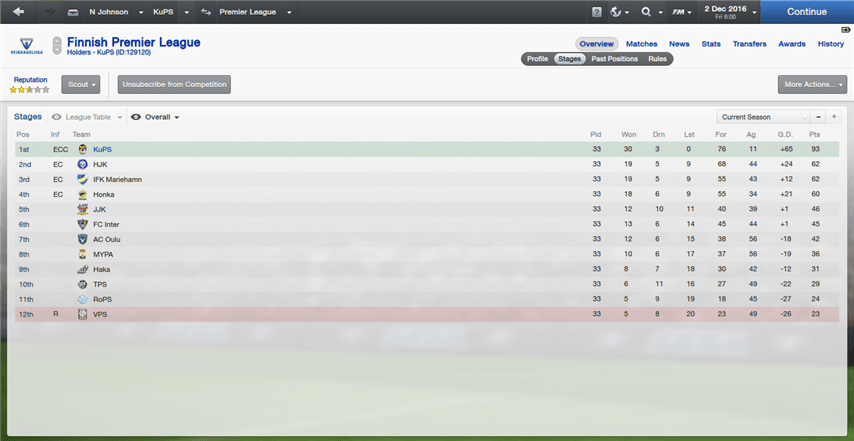 Thirty wins from thirty-three games is special and we were simply amazing this season. We played spectacularly well in every game.


Manager of the Season 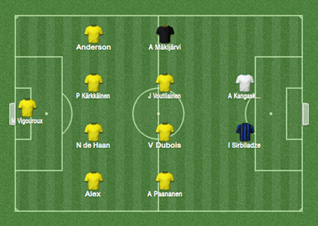 Most Man of the Match Award

Goal of the Season Award

Rookie of the Year Award

I finally claimed the Manager of the Season award for just the second time! I am very happy with this. I am even more happy the Top Three for the Player of the Season were all from KuPS. This really shows our dominance this season.

There is only one aim for me: to win the league a fifth consecutive time!

This being the Finnish Cup, I would always look to win this competition. This is the biggest cup competition in Finland, after all.

I think that this is my first season that I didn't need a penalty shoot-out to get through any rounds in the Cup. We battered Honka in the final which I am delighted with.

My target for next season has to be to win it again. I want to continue our dominance.

The League Cup isn't the most fancies trophy but I always like winning it as it is the openning competition for the season.

We managed to win every single game which is quite extraordinary. We showed our quality and proved that even our weakened team can beat aybody.

Winning it next season isn't a priority but I don't mind winning more trophies.

My goal for this season was to be somewhat competitive in the Group Stages. Here is how we did:

We did very well to compete for third place in our group and if it wasn't for Kolarov, our European season would still be on-going. I am very pleased with the squad and the way we played.

My target for next season would be to finish third in a group, I hope we can do that.

Until next time, stay tuned!
Login to Quote

CantGetEnoughOfJelavic
9 years
Keep it up, doing exceptional.
1
Login to Quote