Neal
7 years
LFC: Yes, he understands now is the time. The new captain is a tough choice, but I think I have made the right one. You'll see soon enough

Walter: Thanks Walter, it's great to know that after so long you all still are enjoying this!

fzemdegs: How often do you see the fans asking for the manager, no the sexy players, to marry them?!

tallery1164: Thanks bud, you gave me quite a run there! Love your story as well, maybe next month the title's yours

Stop stalling Giuseppe. We both want it, stop denying it bby
Login to Quote

Well, let's be honest, I'm the man in this relationship, so you should change the story name to Giuseppe Zemdegs, King of Calcio.
Login to Quote

Well, let's be honest, I'm the man in this relationship, so you should change the story name to Giuseppe Zemdegs, King of Calcio.

Feliks
7 years
OMdeG, the degs puns have hit the forums. Deginitely a bad thing, most people will be degusted with these puns. Personally, I degest the use of them, and I think they are a degative influence on this site.
Login to Quote

2014-08-04 18:52#188221 fzemdegs : OMdeG, the degs puns have hit the forums. Deginitely a bad thing, most people will be degusted with these puns. Personally, I degest the use of them, and I think they are a degative influence on this site. 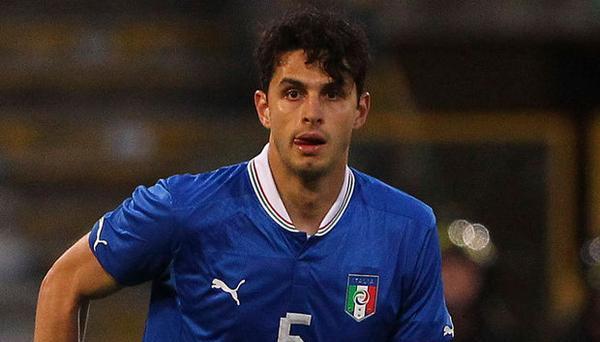 30 year old Andrea Ranocchia, who is the captain at Inter Milan (Giuseppe Bergomi's club side), has now been appointed the new captain of the Italy national team.

Just two days ago, legendary Italy captain Daniele De Rossi relinquished the armband. The Bayer Leverkusen man, who has made a record 144 caps over the years, was quoted as saying that he feels as though it's time for a slightly younger leader to step through the ranks for Italy. Though definitely massive shoes to fill, somebody had to step up to the job, and Azzurri manager Giuseppe Bergomi had made his decision.

Andrea Ranocchia has been given the armband on a permanent basis. The 30 year old central defender is recently coming off of winning the FIFA World Cup Golden Ball award, given to the best player of the tournament, and is widely considered one of the best defenders in the world. Ranocchia is also Bergomi's captain for Inter Milan at the club level.

The Italian camp seems to have reacted very positively to this decision. Ranocchia broke into the Italy setup as a regular four years ago and has now made 51 appearances for the Azzurri. He has been hailed as one of the best defenders in Serie A since 2012 and, on the international stage, has created a nearly unbeatable partnership with Leonardo Bonucci.

"It is a great honor for me to wear the captain's armband," said Ranocchia. "You grow up dreaming to wear the national shirt and lead your team as your country's captain. Now I get to live that dream, and I cannot wait."

Some people are surprised that 32 year old vice-captain Claudio Marchisio was not promoted to the captain's role on a full-time basis. The central midfielder has made 95 caps in his long career but has recently started to lose his starting spot to the likes of Andrea Poli and Lorenzo Crisetig. Some experts are suggesting that Bergomi wanted a leader who could lead from the pitch for at least a few more years.

The passing of the captain's armband is complete. However, could the passing of the managerial post be coming shortly? It is being heavily suggested that Giuseppe Bergomi may step down from his international job, and maybe even his club job, and declare his retirement from football after six trophy-filled seasons. Until more on that story is official, however, fans of the Azzurri must quietly hope that the appointment of one of his own players is a sign that Bergomi will stay on for a while longer.
Login to Quote

JasonRM
7 years
Excellent choice for a captain, but don't step down!

squirmy420
7 years
De Rossi is hard to replace, but I have faith you can get the best outta Ranocchia.
Login to Quote

Neal
7 years
LFC: Big shoes to fill, but I think he can handle it

The Madridista: Thanks buddy, and I don't know, perhaps my time is drawing near

squirmy420: Definitely hard to replace but Ranocchia is a great player who I trust


As a boy, I always had the same dream. It always began with the noise, the incessant roar of tens of thousands. It always moved then to exiting the tunnel with my teammates, linking arms during the national anthem, and taking to the pitch. And yet, each time the whistle blew for kick off, I would wake, the last feeling I could remember being the weight of the Internazionale jersey on my back and the armband, nice and tight.

I'd live the next parts of those dreams out on the streets and the fields with my friends. Each tackle I put in, each header I won, each goal I scored, I imagined that jersey right back on my back, the captain's band still around my arm, and the fans still screaming. I'd have given anything to achieve that dream.

And one day, it came true. That one day the scout approached me and told me I could play for Inter. From there, I never looked back.

Twenty years, seven hundred and fifty-six matches later, and five beautiful trophies later, I'd hung up my boots and turned in that armband that I'd craved for so long. Those twenty years were ones I'd never forget, with a club that I'd never forget. So few people get to truly achieve their dreams like I did. I will always remember the day I decided to end my playing days; I'd wept openly to leave this club, this home I'd found.

And for my country, still more dreams came true. Eighty one caps, the armband, and, most importantly, hoisting the World Cup trophy, I got to experience that as well. It is one thing to represent the club you love for two decades, but to make an entire nation proud in the way we did in '82...nothing could beat that feeling.

I never thought that I'd return. After retiring, I'd gotten into punditry. Commentating on Inter games was good, as it kept me close to football and the club I loved, but my heart yearned for more. Still I wanted to return to the place I love and reconquer the world.

When the chance came six years ago to take charge of Internazionale, how could I say no? A return to the Nerazzurri, and a chance to continue to make history; everything I'd asked for had been delivered to me. What I never expected was the success that followed.

Three hundred and fifty one games in six years. That's all it took for us to bring in twenty-five trophies. Six Scudetti, six Coppa Italia, four Supercoppa Italiana, one Europa League, three Champions Leagues, three UEFA Supercups, and two Club World Cups. I never would have believed this was even possible, and yet here I am, in charge of by far the greatest team on planet Earth; Inter.

And, of course, the World Cup. No football competition can even begin to compare to this clash of giants; even the UEFA Champions League pales in comparison to this greatest Cup of countries across the globe. When I was given the chance to manage Italy, again I could not refuse. Winning the World Cup again just last week...it transcends words.

And now, I can't help but ask myself: What more have I left to do here? I'm well into my fifties now, and I've won every competition I could ever win with Inter Milan and Italy. Some of my friends have told me to leave, to try new countries, new continents, but how could I leave? This country, this club...they are the only things that have ever been a part of my life. I could not leave them for another, not now and not ever.

And so, while I am still here, atop the world, is it time to finally let it all go? The challenge may be gone and trophies may be won, but there are still records to break, and a part of my heart will always continue to yearn for the black and blue...

The hardest decision of my life now looms before me: Should I stay and continue my reign atop the world, or walk away on top?
Login to Quote

squirmy420
7 years
Keep going! The hardest thing to do is walk away. Play til you die, says I!
Login to Quote