In one of Rykers famous short, breif statements he has announced that 15 new members of staff have joined him at the club. He has claimed they are all specialists in their chosen field and were only chosen becuase they buy into his idea of creating an long-term dynasty with youngsters. Ryker had nothing else to add after this.
Login to Quote

haha good luck at Bremen mate and some excellent updates!
1
Login to Quote

haha good luck at Bremen mate and some excellent updates!


I sat in my office and breathed a huge sigh of releif. The stupid meeting had gone on for two hours of me trying to desperately persuade the baord to improve the youth facilities. They had relented for over a hour but finally they gave in! A four million pound investment is being made to the youth facilities so I can actually work towards my class of 15' as it has been nicknamed by the press after the famous class of 92'.

I smiled at the thought of my youth prospects becoming that good. It's things like that, that etch your name into the history books. It was a must not just for the club... But also for me! 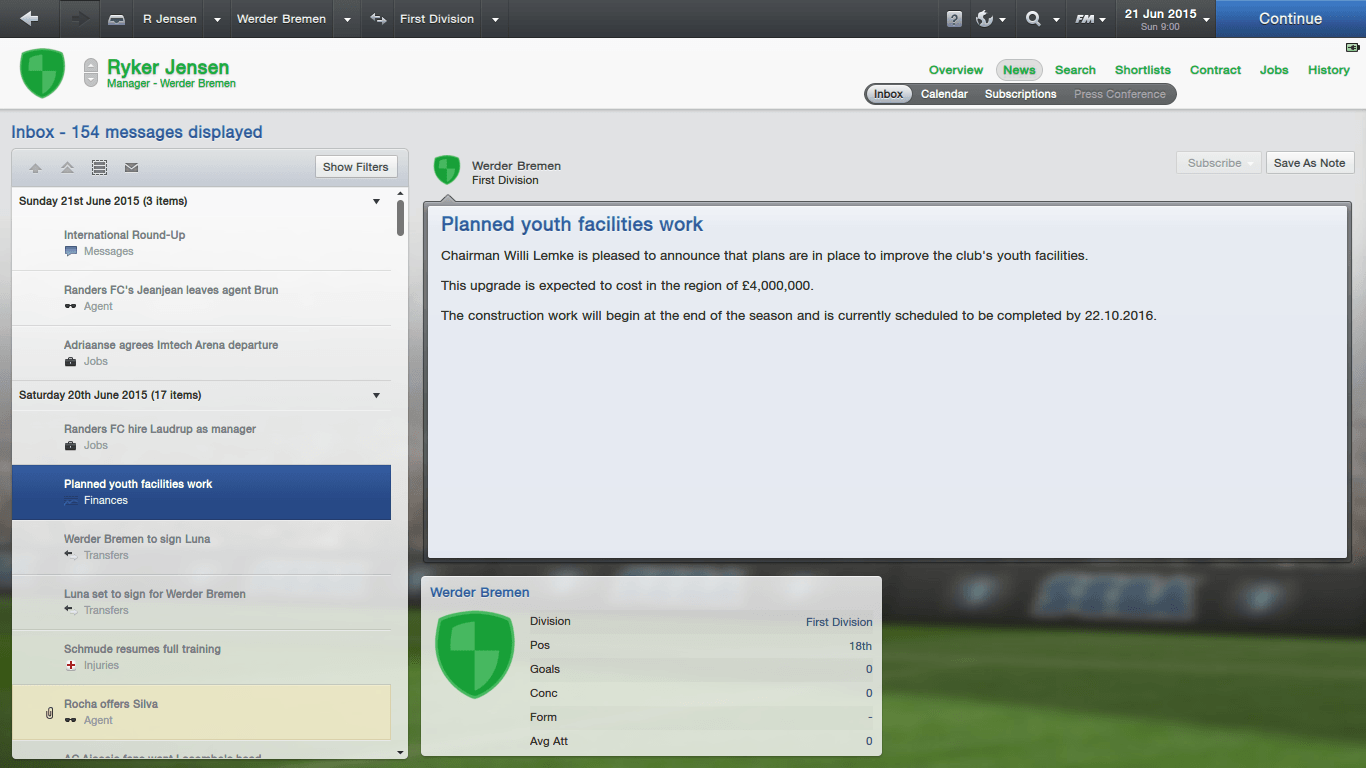 The Squad and Tactics 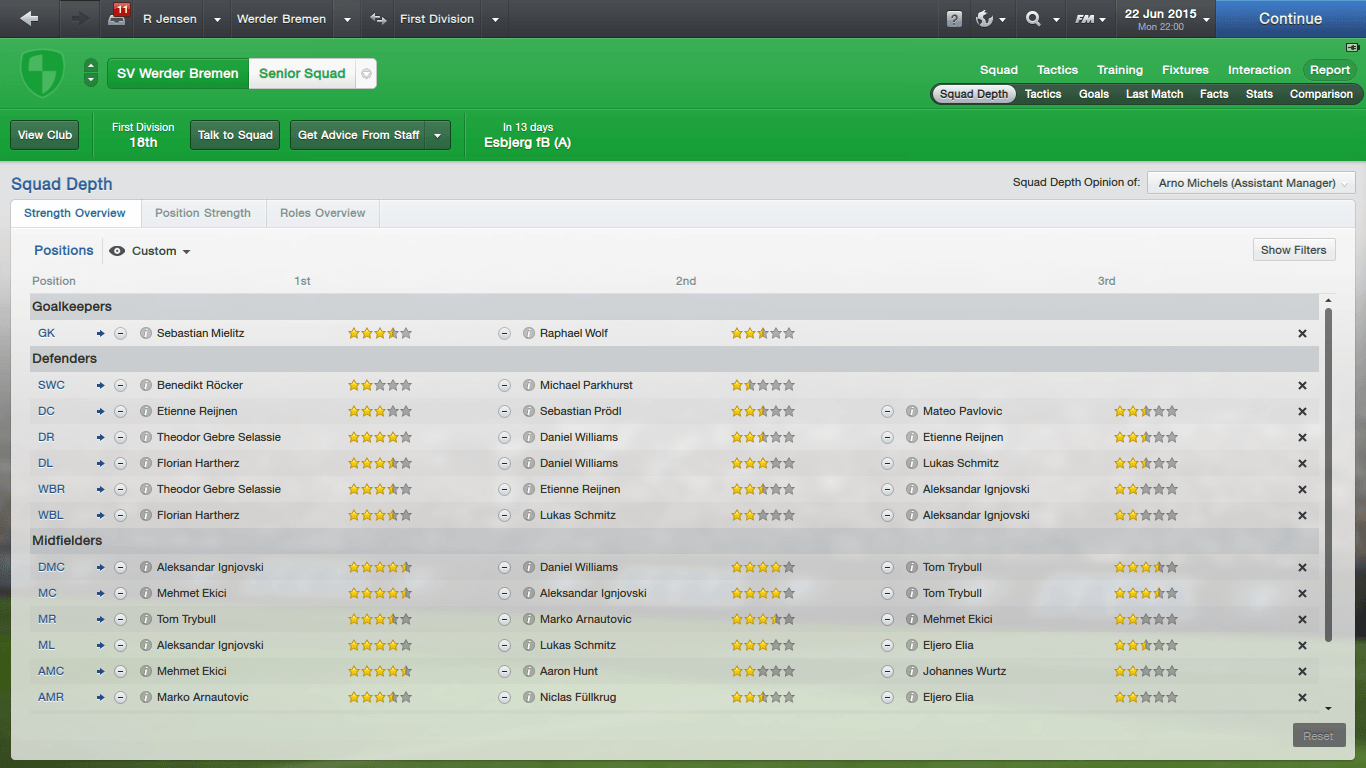 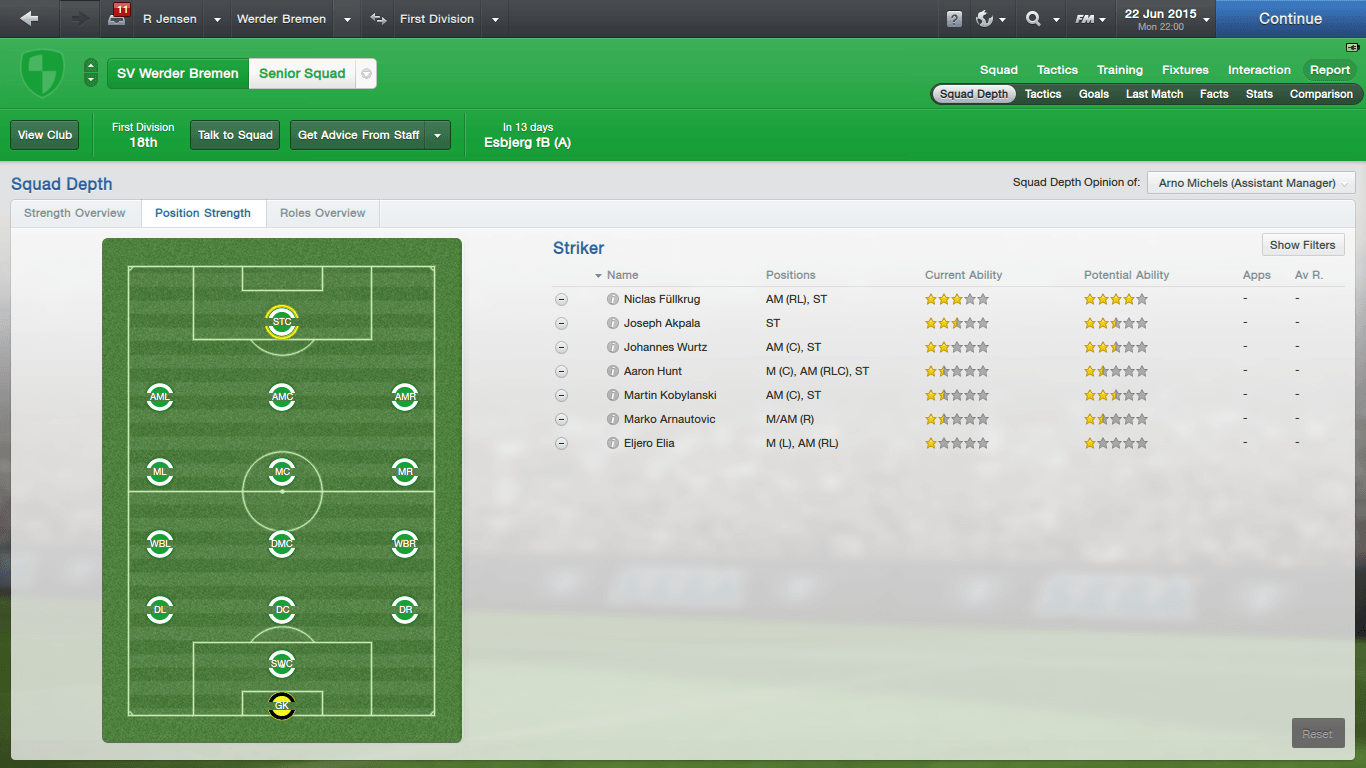 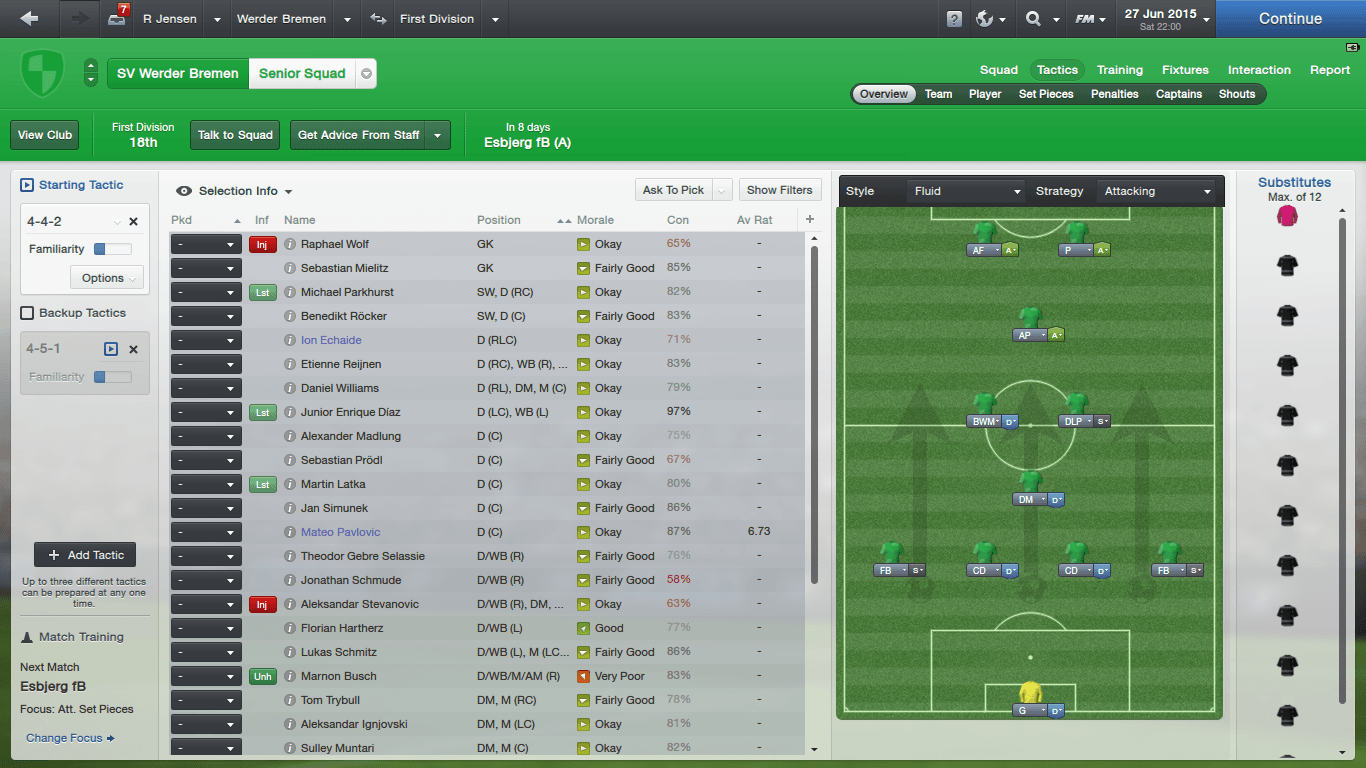 Seven Join On The Opening Of The Transfer Window


Ryker Jensen has wased no time making a big splash in the tranfer market as seven youngsters from the ages of 17-21 have all joined Werder Bremen on the opening day of teh transfer window. They are all supposedly good enough to become the next big thing in each of their positions, this is another apparent step that Ryker Jensen is trying to build his team with youth. 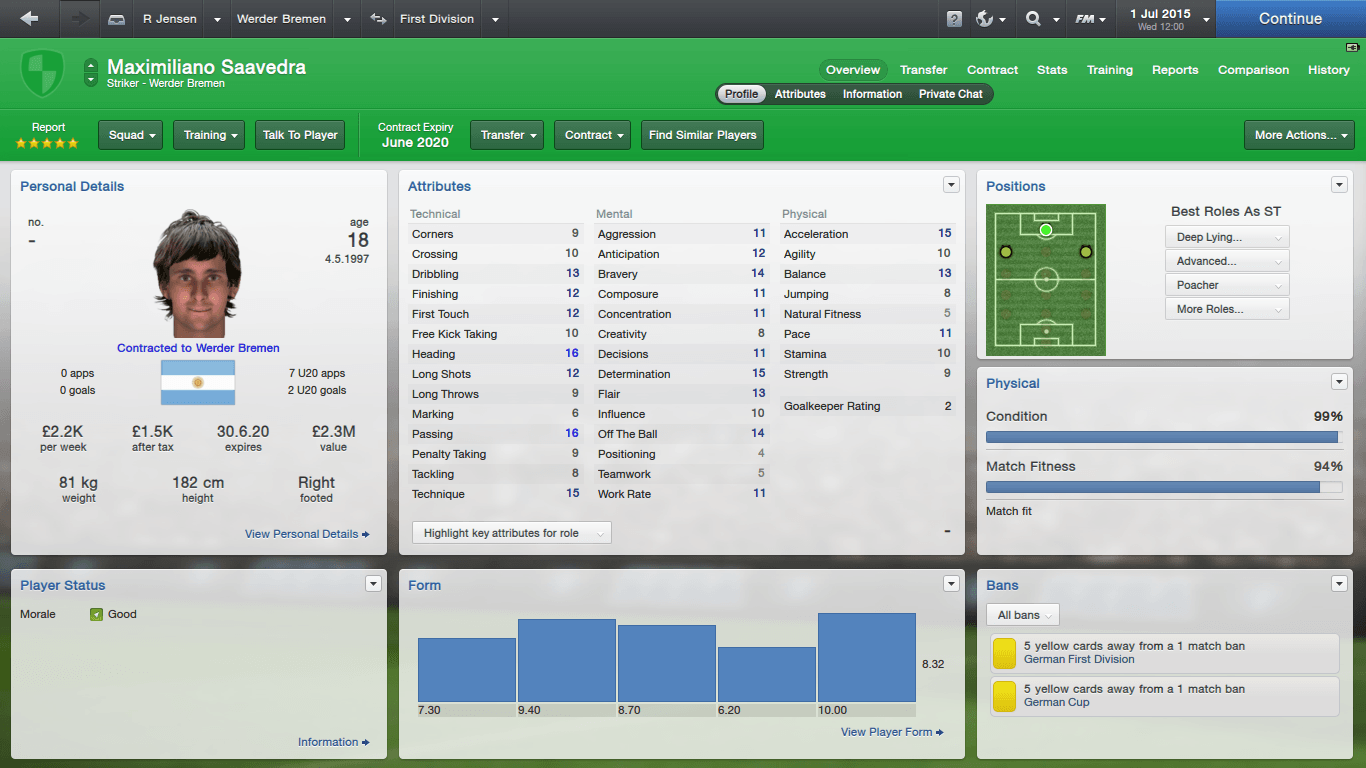 A striker with the potential to become the best in the world. What amazes me most is I have learnt over my FM playing years passing is an attribute that always develops a lot as players get older regardless of what position they play in. Saavedra already has 16 passing and with a PA of 5* there is a strong chance he could get 20 passing. Not bad for a striker! His physical attributes with improve with age all I need to do is make sure is natural fitness improves! 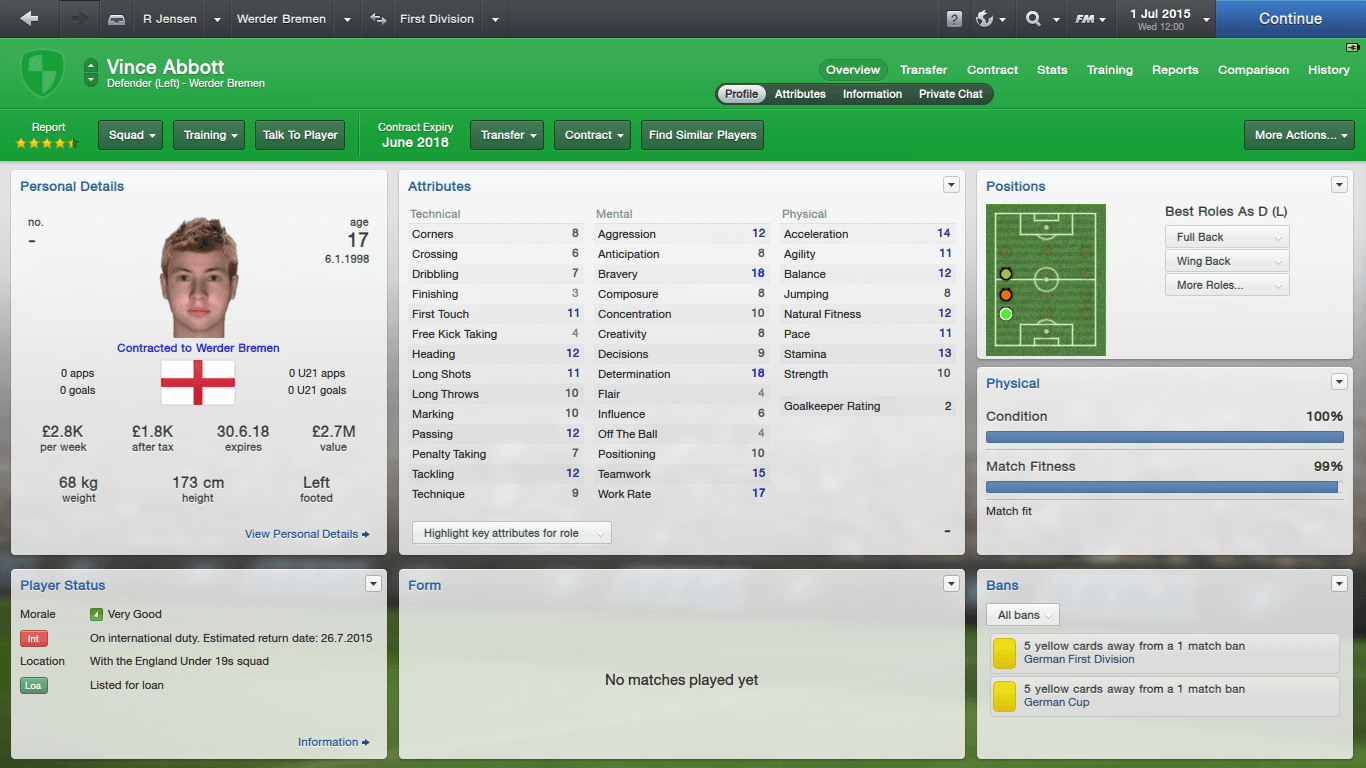 A left-back with very good potential. He already has decent physical attributes and they are certain to improve with age and development. What I like the most about Abbot is he is a obvious team player exactly what you want from a full back who plays the support role. I am very looking forward to this player getting to his peak. 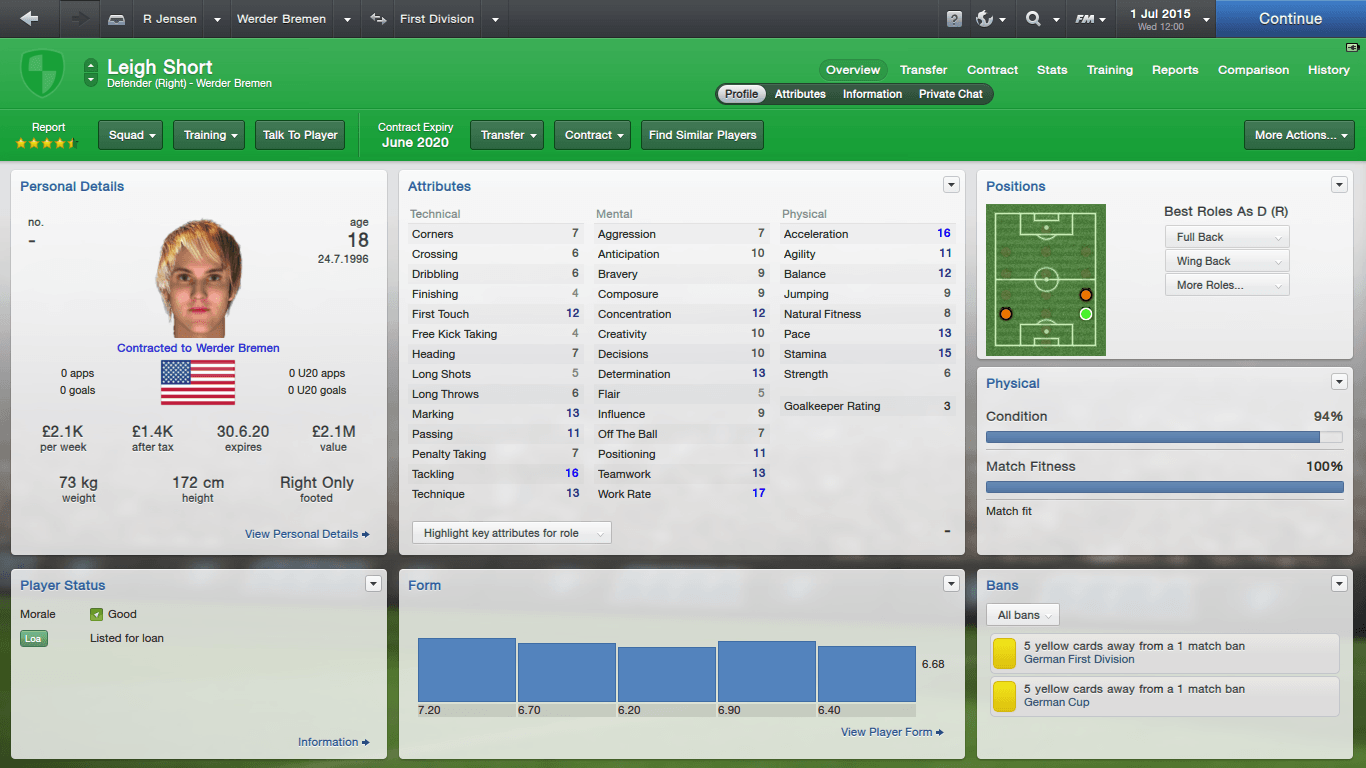 A right-back that in my opinion perfectly supplements Vince Abbot who will play on the opposite wing. They are both fast, team players and are not afraid to get stuck in. I am most impressed with his already very good speed and if that improves any more then attackers will find it very difficult to get past. 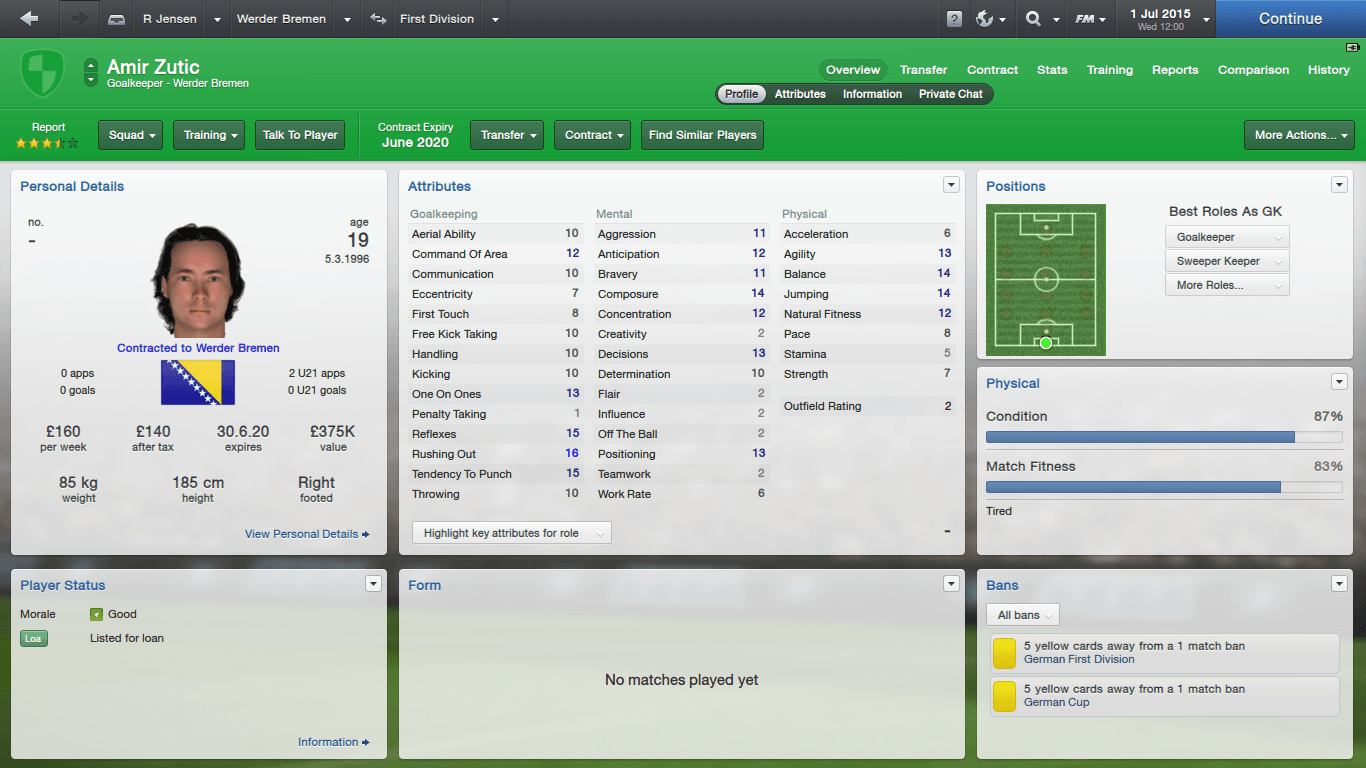 This keeper has a very bright future ahead of him but he has been brought to be the back up keeper for another one of the youngsters I have brought and will show you later on in the update. But as for this keeper he is a steal for just £650k and is good enough to become a starter let alone a backup. 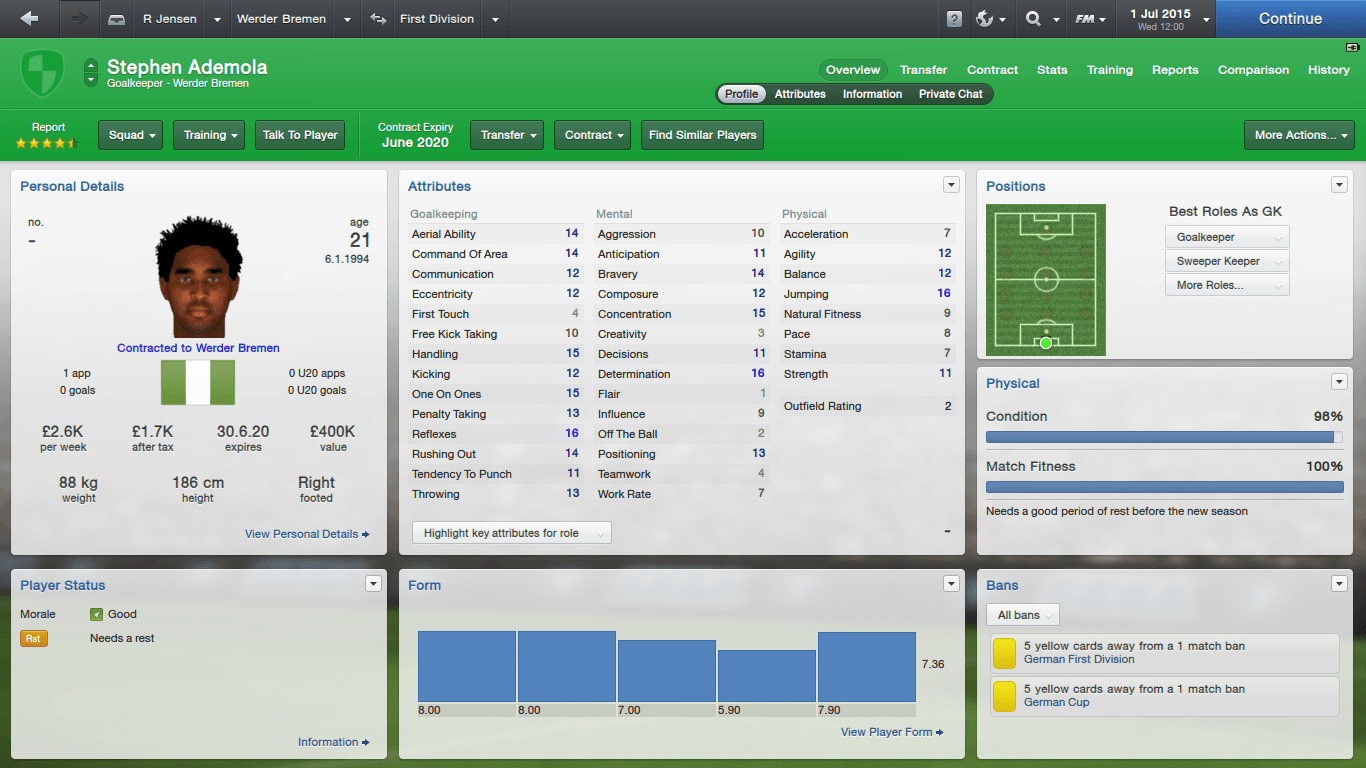 Here is my main keeper! At just £650k I don't think anyone can argue he is not a quality steal! Hard to point out a amazing stat about him becuase all of the keeper relevant attributes are already at a pretty good standard but they will improve in time and he can become a top, top keeper. 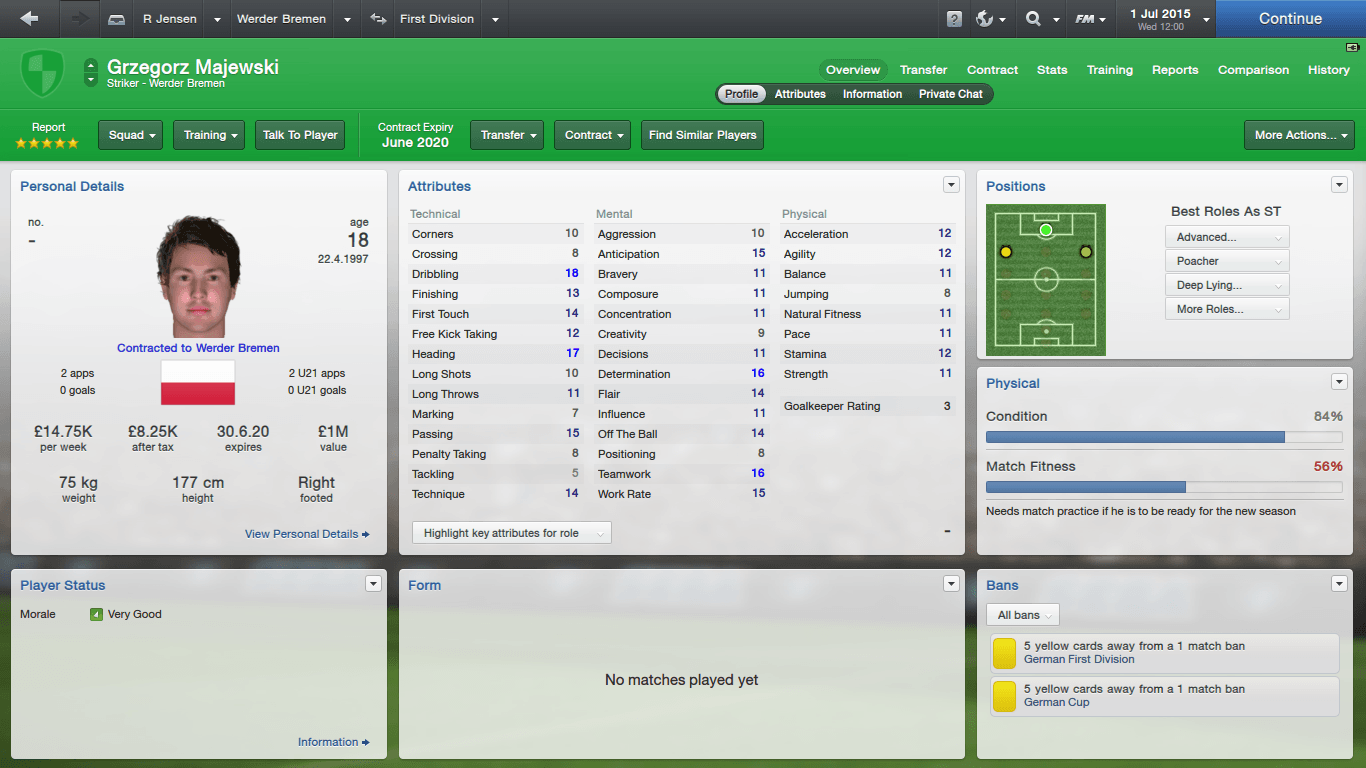 Another soon to be superstar upfront! What I also like about this player is he amazing at dribbling, very good at heading, good at passing and already got decent physical attributes. He is an all round striker who can score with head and foot. If he reaches his expected PA then he will form a unstoppable partnership with Maximiliano Saavedra. 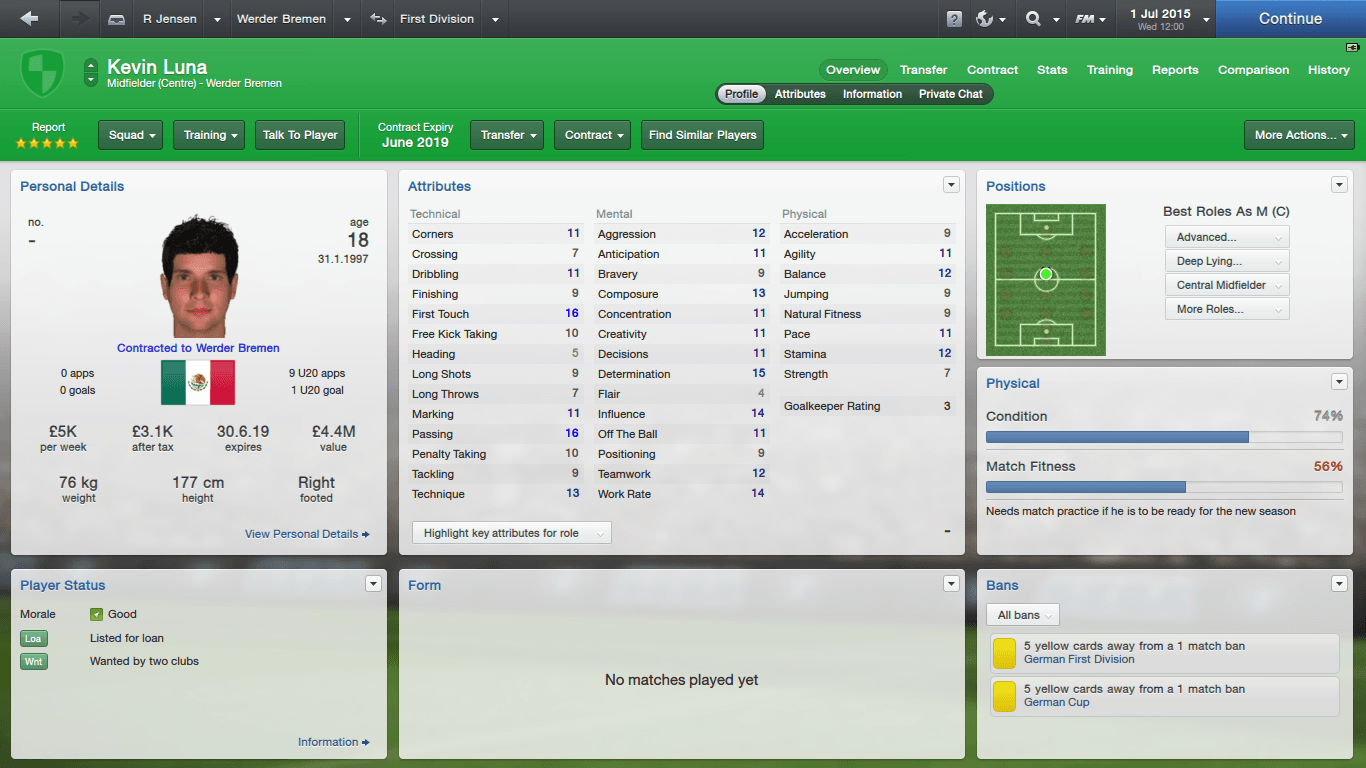 My favourite yet. He is already very good at passing so when he gets to his peak him and the strikers will be a force to say the least. Every team needs a playmaker and he will be the playmaker. He is very consistent and is a great team player. He is definantly one to look out for in the future!
Login to Quote

All Seven Youngsters Loaned Straight Back Out


Werder Bremen have confiremd that all seven recent brought players have been laoned straight back out. Ryker Jensen has confirmed he wanted them to get first team experience and has assured the fans that all the clubs that the players have gone to have promised they will all be used as crucuial part of the first team meaning they get plenty of game time. 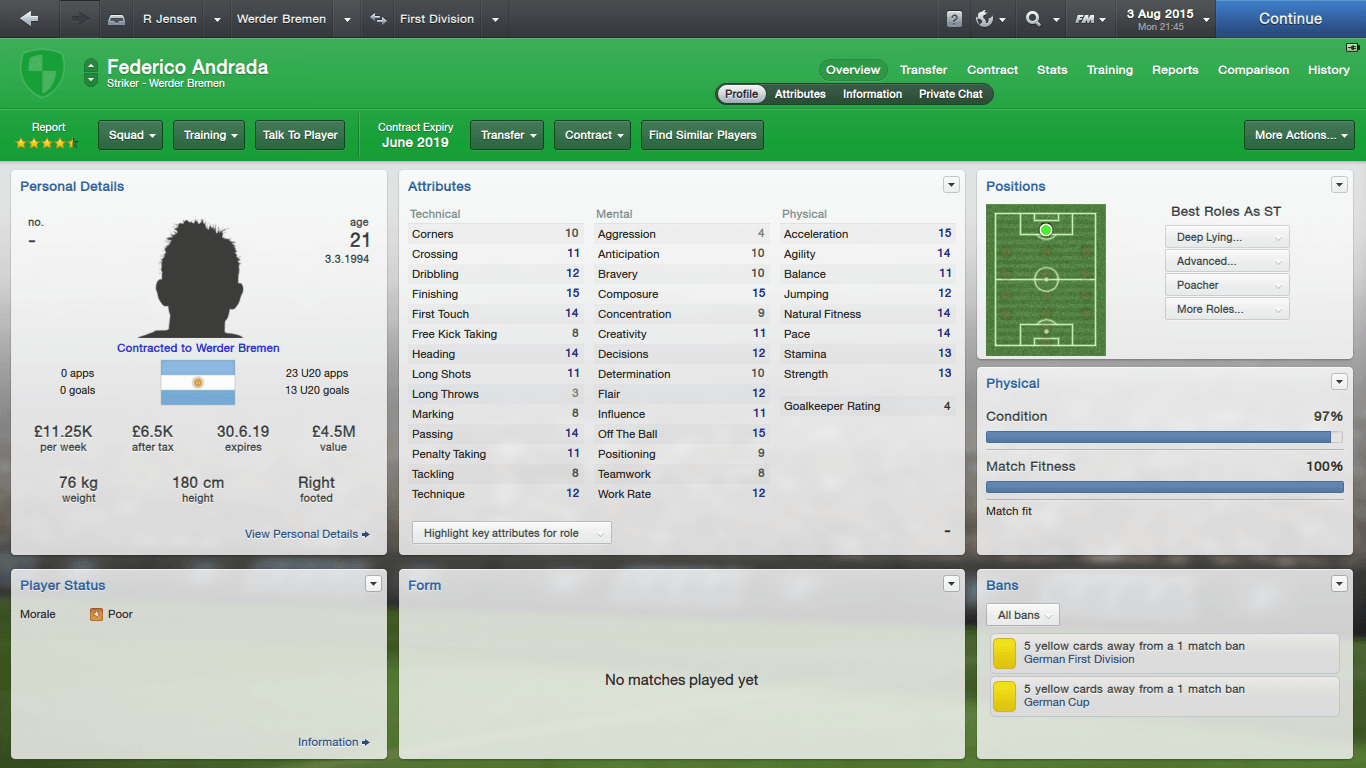 The first signing for the first team made by Ryker so far this summer. He beleives that his strike force needed improving if he is to get mid-table this season and what a way to do so. For just bargain fee of £7.5m Andrada offers pace, strength and good tecnique to form a all round good player. Bremen fans may have themselves a new hero.
Login to Quote

Those are some quality regens

Those are some quality regens

No sleep in Bremen buddy!

A Bremen Hero Is Shown The Exit

The next day at training Jensen openly confronted Marko Arnautovic about the tweet claiming that he was being unprofessional and was letting the team. He also went on to tell Marko Arnautovic that he didn't care whether he liked him or not but he either had to put up and shut up ot be shown the door. Marko Arnautovic decided on the latter. It is runoured that Marko Arnautovic looked for support from his fellow team mates but they were all on Jensen's side as they all brought into his philosophy and they were not going to jeprodise their careers for the sake of a friend.

Marko Arnautovic has moved to Reading for a fee of £2.5m. 500k more than he was valued at, so Jensen will be pleased to get some extra money from a player he thought of as deadwood. Marko Arnautovic however will be very annoyed he decided to leave as he has now been thrown into the Reading Reserves and his career at a high level may just be over.
Login to Quote

Poor Pre-Season Does Not Bother Ryker 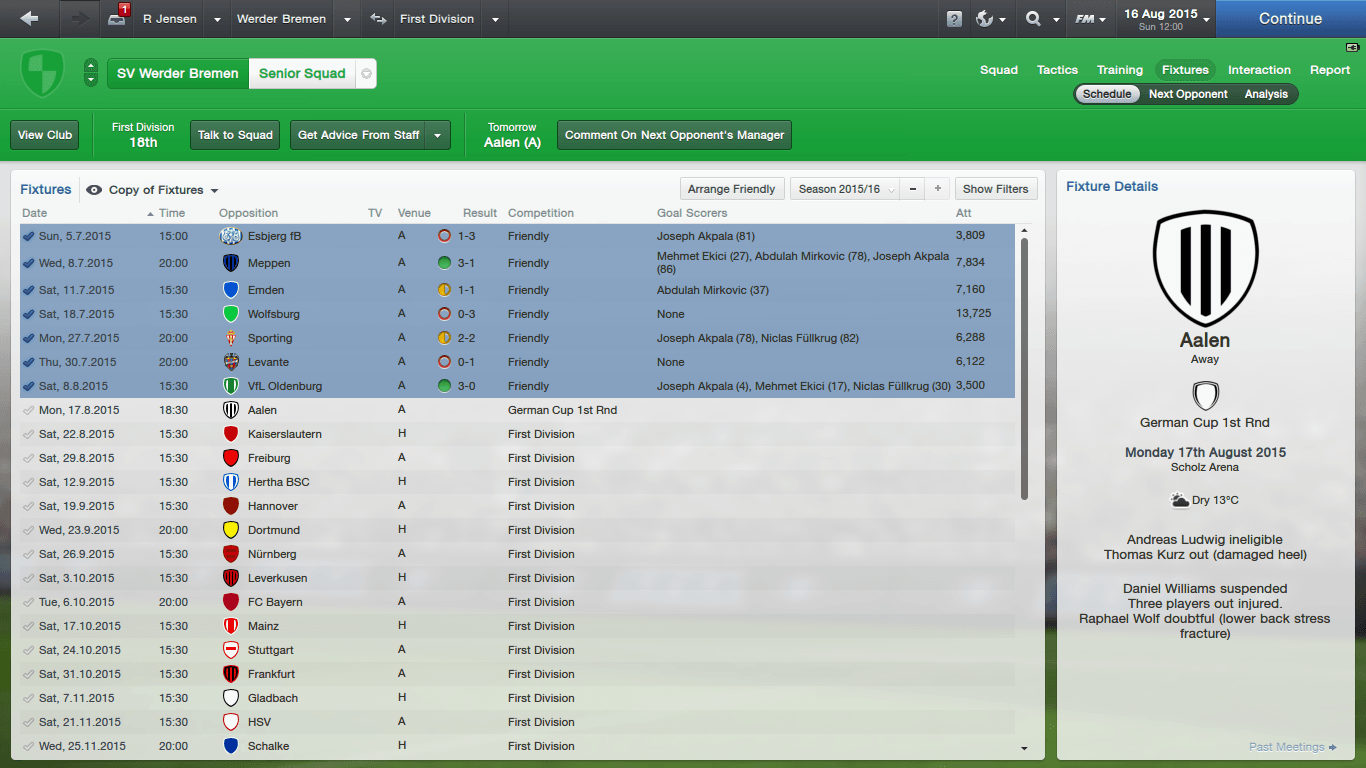 Jensen is supposedly happy with the pre-season despite his side losing three, drawing two and winning two. Ryker after the last friendly match which they did manage to win 3-1, he spoke to the nearby journalists.

"I am happy with this pre-season as many reserve players played. Not once was our starting 11 on the pitch together at any one time."
Login to Quote

Mickzter97
9 years
No man is bigger than Bremen!

Well except maybe for Jensen

Well except maybe for Jensen

Jensen is bigger than every club!
Login to Quote


I sat in the managerial chair watching the players training after a good first two months. The harmony in the squad was very good. We all got on very well they were a good bunch of lads and I was certain they could over acheive this season.


I am very dissapointed with the one goal margin but a win is a win. 1-0.


http://www.spox.com/de/sport/fussball/bundesliga/saison2011-2012/spieltag-1/bilder/bremen-kaiserslautern-aufstellungen-514.jpg
A very dissapointing 3-2 defeat at home which left me very annoyed with the lack of defensive ability in this team.

http://www.werder.de/media/images/fussball/profis/saison_2012_13/630/fritzgegenjendrisek630.jpg
A great win agaisnt Freiburg after coming from behind to win 2-1 http://maxbet212.net/wp-content/uploads/2013/01/werder-bremen.jpg
A great draw agaisnt a far better team. The keepr did very well to save as many shots as he did to keep us in the game. 1-1

http://www.freebetting.com/wp-content/uploads/2012/08/Borussia-Dortmund-vs-Werder-Bremen-300x224.jpg
A hard thought draw with the league holders. 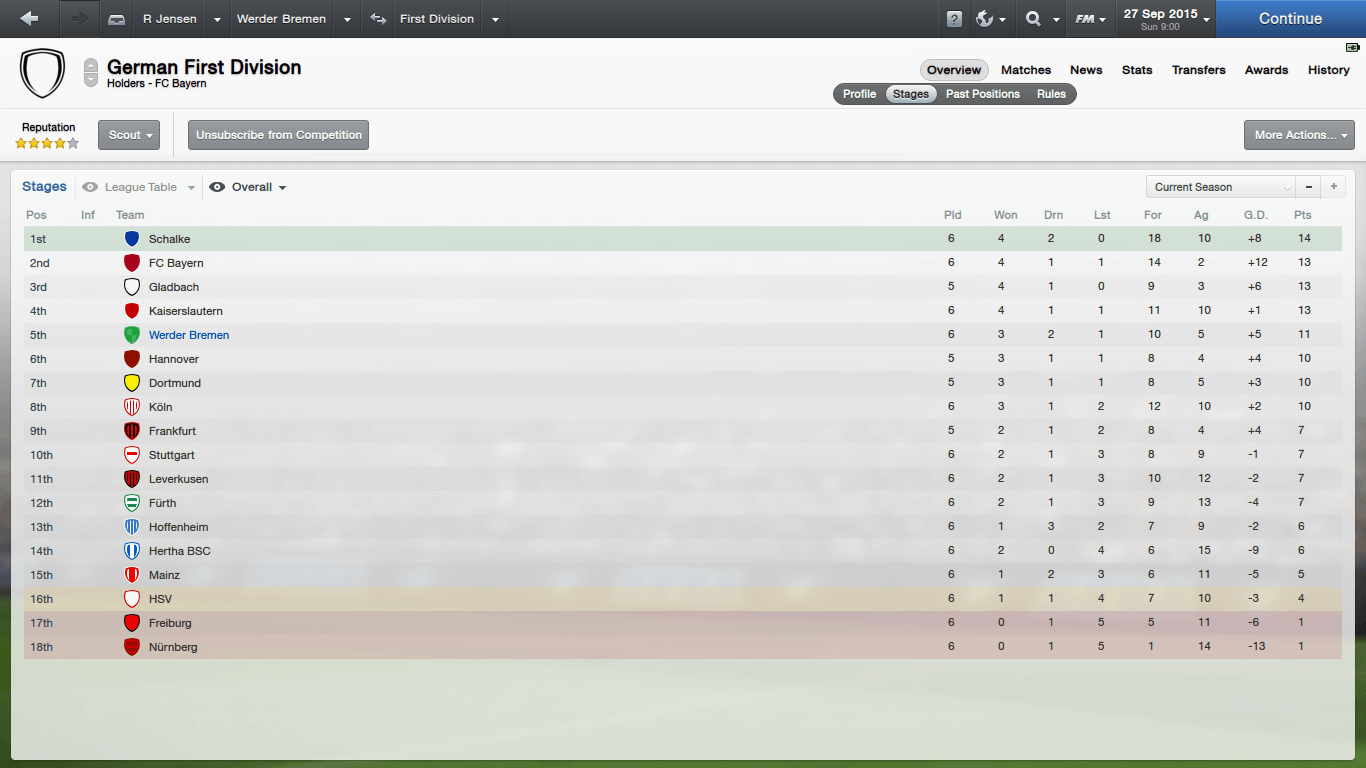 
Andrada has been great this month scoring 3 goals and with two assists. With a rating of 7.21 after 7 matches.


Aaron Hunt scored a 25 yard screamer on the volley and is worthy of the goal of the month by quite some margin. There were not many other good goals apart from this.
Login to Quote