Another Month Ryker Still As Good As Always


I entered the boardroom to speak to the chariman, the very rich chairman that was currently pumping ridiculous amounts of money into the club. I knew full well that if I did not perform well I would be scaked quickly. Exactly the sort of club that sorts me down to the ground. I was here to stay and I was here to win trophies.

I smiled at the chairman and shook his hand firmly wondering why he randomly called me into to talk today.
"I want to congratulate you on your performances so far Ryker keep it up! That is all I didn't need a big chat just a congratulating word!"
A smile broke across my face I could tell I will like this mans style! "Thank you sir I am enjoying it here the fans are amazing!"

I left as quick as I came in. 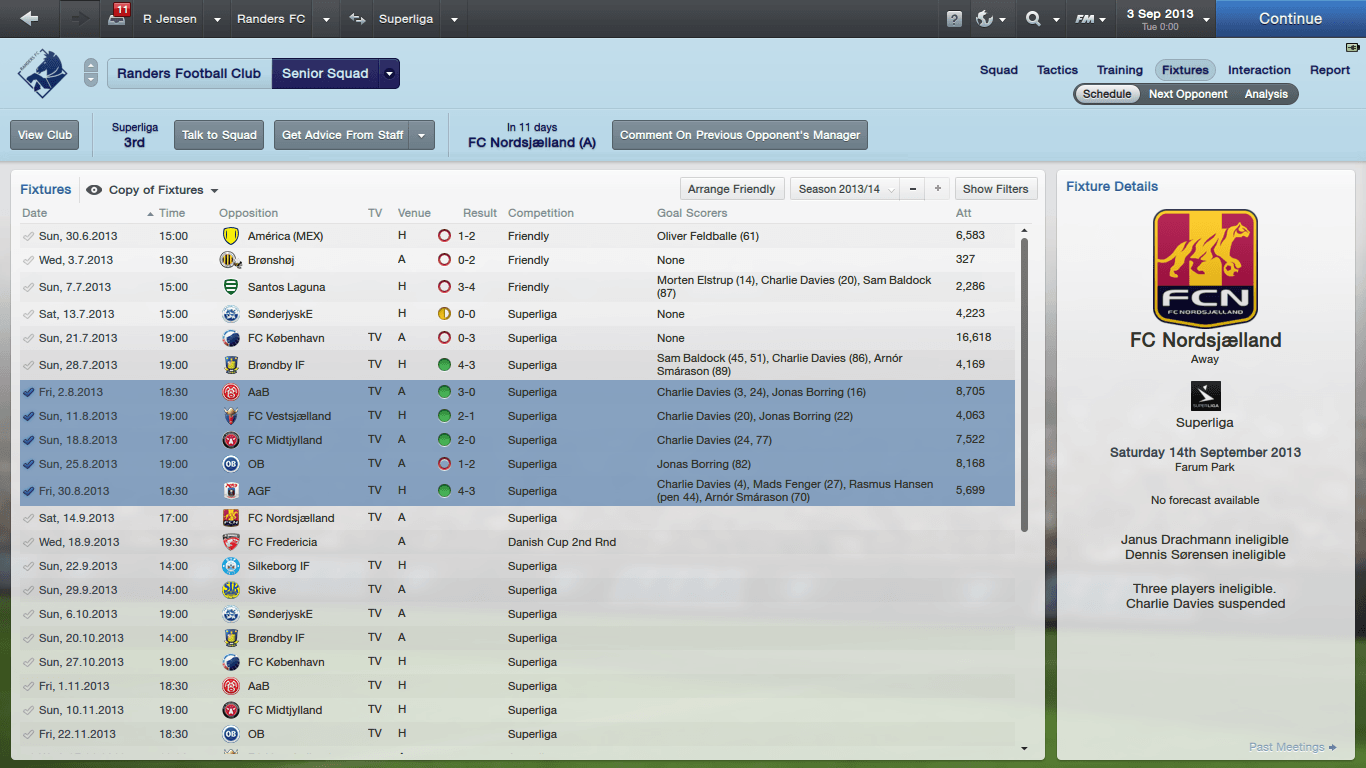 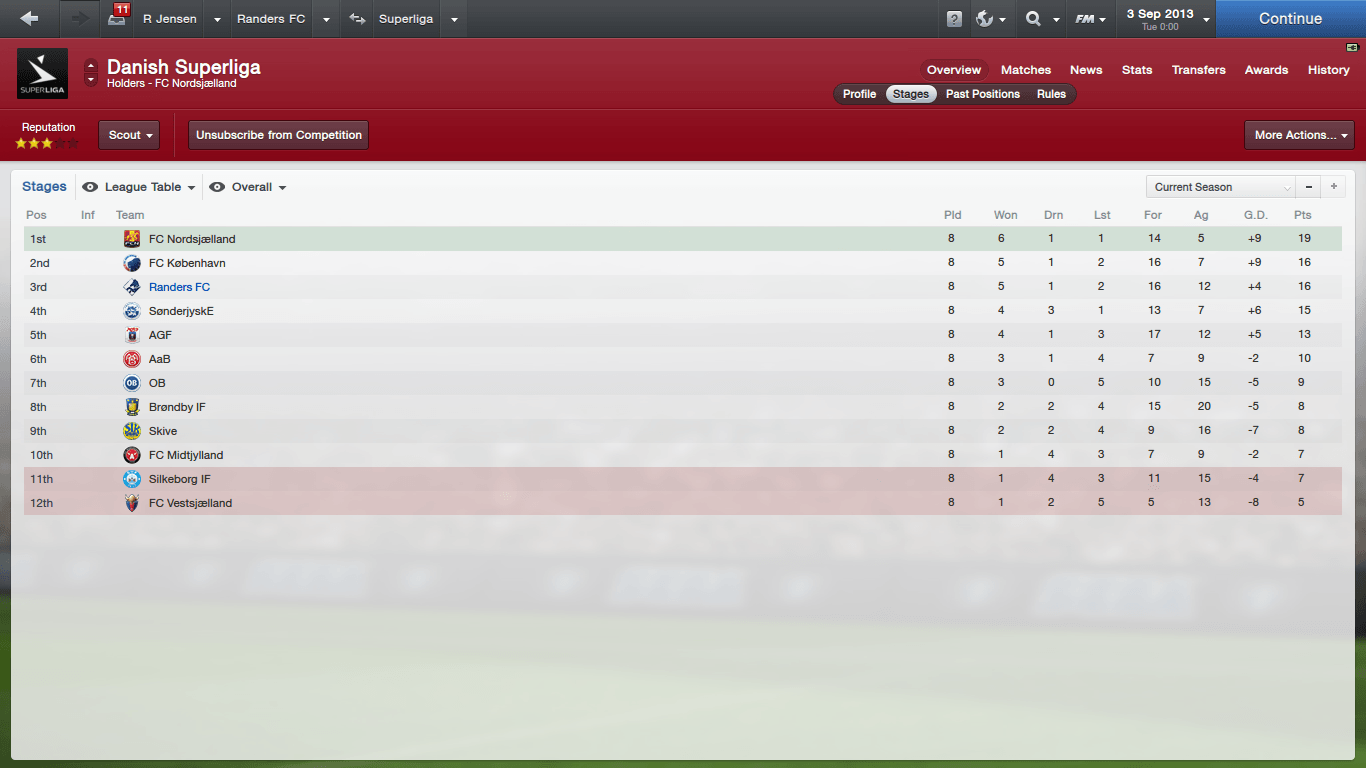 k1rups
9 years
Randers FC are flying there :p good work and just one loss makes it a good run
Login to Quote

Louis O.
9 years
Haha, you don't deserve to be sacked so good on the chairman

Arvind
9 years
Excellent month for Ryker and Randers, despite that narrow loss to OB. Keep pushing and you will end up with the league trophy come the end of the season

Blue
9 years
Just caught up with this

good month! Although I wish you'd sort your spelling and grammar out

Fianlly got the tactic I used working well!

Louis O.: I hope I won't! With my current performances I am safe

Arvind: Cheers Arvind! The league is a but out of reach but top 3/4 is a certain!


I sat on my brand new desk chair and looked out onto the training pitch where my players were being put their paces by my coaching staff. I couldn't beleive how much I was loving it here, my whole life I have wanted to be adored and here I am. ADORED by the fans and the players. But unlike F.C. this is a real team with real fans, not plastic fans that only turn up when we are doing well! I stood up and poured my self a whiskey and sipped calmly. I was well known now for brooding and over thinking in my office in comparison to many other managers. I liked to think about what is going on about the club and not always be changing the things about the club. I am a thinker the chairman has told me many times, he likes that apparently which can only help me succeed.

I looked through our results for this month, four wins was amazing! But that defeat to Nordsjaeland stuck in my mind the most. I may be winning games but I won't win anything if I do not beat the best and I was no where near beating them! 3-1 we lost I remember that game well and how I smashed up my office when I got back to Randers.... explains a lot about me really.

I had recently brang in a unofficial awar ceremony every month for my team so they have even more motivation to push on and be their best. It was goal of the month and player of the month. I enjoyed tis with F.C. so I think I will enjoy it here.


Player Of The Month:

I have decided to gove player of the month to Sam Baldock who is on fire! He has scored six goals in five matchs this month and set up several as well. He has always performed well and has helped drag the team out of some bad positions on his own! A good mention is Brock-Madsen who was not even in my main team at the beggining of the month but has forced himself into the starting 11 with some goals of his own. A player with grear potential.

Goal Of The Month:

This award goes to youngster Brock-Madsen who scored a stunning goal against Skive to secure a 3-1 victory for our side. I was in shock when I saw this finish from such a inexperienced player. Baldock chested the ball down from a goal kick flicked it on it Brcok-Madsen and he flicked it up with his right foot and clamly chipped the keeper from outside the box. Was a stunning finish! 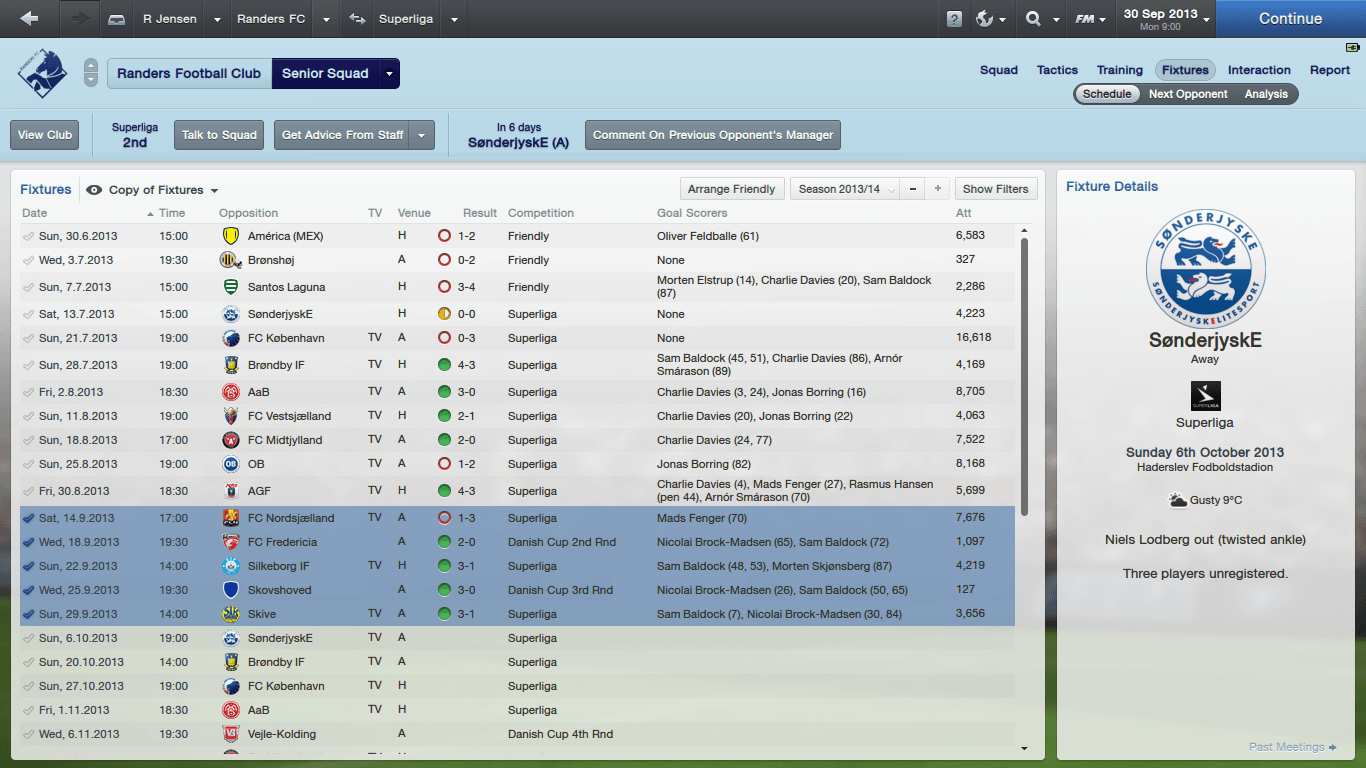 Louis O.
9 years
Unlucky to lose to Nordsjaelland, but you can still catch them up!
Login to Quote

Jozef
9 years
6 in 5. Not bad. Keep it up Beany.I'm sure you can eclipse Nordsjaelland.
Login to Quote

k1rups
9 years
That loss must have been tough to take but you're only 3 points behind them! Could Randers be on the way to the title?

Do they still have Okore?

BeanyUnited
9 years
Louis O.: I may be able to but will be tough!

The Special one: Cheers mate

k1rups: I will fight for it!

Glenn T: I think they do adn thanks Glenn

yuttra52: Top three is now my aim instead of top 5 like it was when I first joined Randers. As for Baldock he is not even close! He has scored several of his 8 goals in cups so

Back To The Old Times


I had not been this nervous since the day I left F.C. it must be something about that place that gets me nervous, the plastic fans most likely are the reason. I don't want to do badly in front of them and give them an ounce of happiness. They made my first managerial job hell! And I hate them for it. But today me and my Randers side who are suprisingly challenging for the title, travel to F.C. to face off against my old team it was going to be intense it was going to be tough but I was looking forward to it!


I sat in my desk office chair and swivled around while chewing on my pen........ Who to start for such a physical game. I decided to leave it how it has been for several weeks now, no point changing a winning formula for one match! 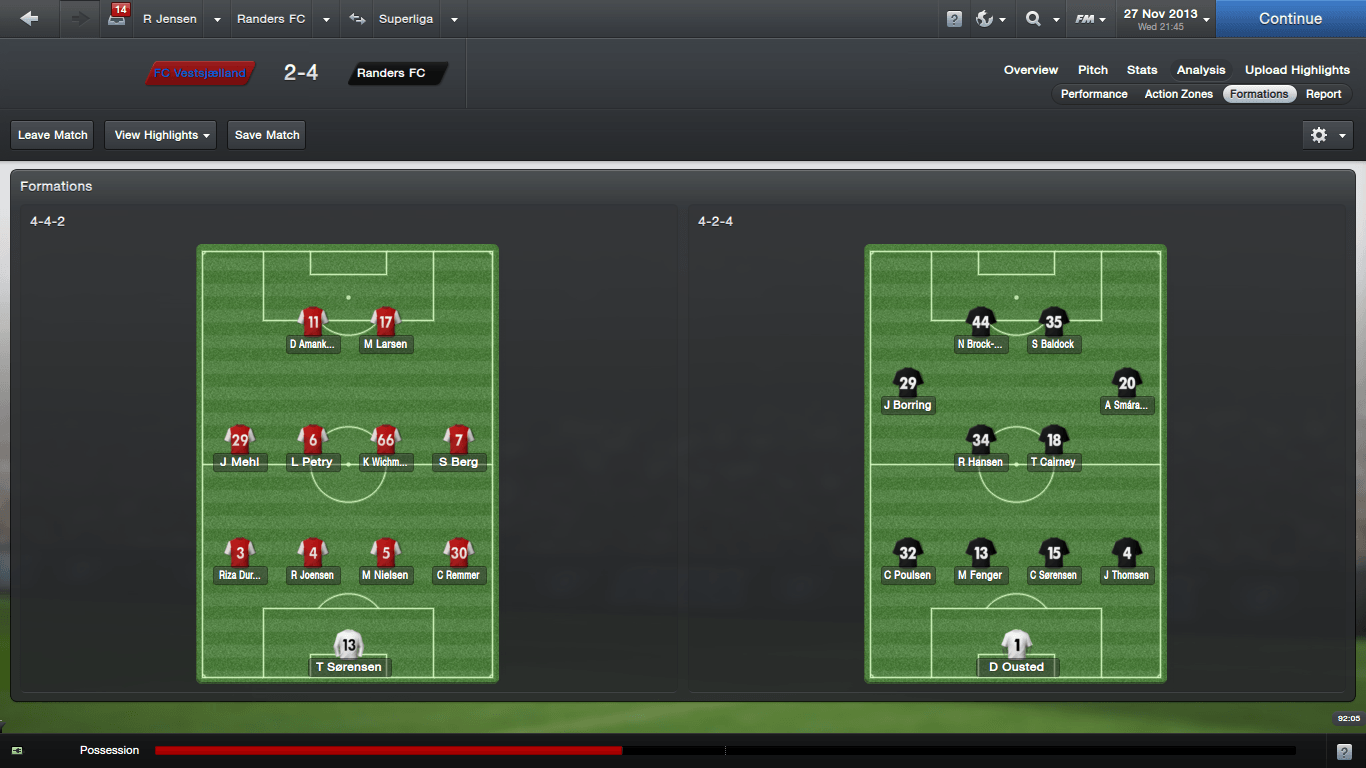 
We got of the bus to enter the stadium three hours before kick-off we wanted to be there early, but the F.C. 'fans' were there. They shouted abuse at me from the side lines I quickly joged up the steps and opened the door for my players to quickly enter through before any of the 'fans' got to them but I was not going to let them get away with this. I waited my moment and heard one 'fan' shout at me. "Your a sh*t manager with a sh*t club!!!" So I turned round and without hesitating replied, "Where are you in the table?? Oh yeah in the relegation zone!" then turned and left.
This is going to be a tense match.

02:30 F.C. have started strongly and Amankanwaa passes it short to Larsen a great back heel by Larsen AMANKANWAA!!!!!!!!!! 1-0 F.C. THIS IS SENSATIONAL!! NO ONE GAVE THEM A PRAYER YET THEY LEAD!! RYKER PUTS HIS HEAD IN HIS HANDS!!!
Disturbing scenes near the Randers dugout a F.C. fan has bee arrested for throwing a coin at Ryker Jensen, this is a feirce rivalry of pure hatred!!!


13:37 Brock-Madsen what a run who gets past Remmer who he leaves on the floor, Brock-Madsen rounds the keeper! GOOOOOOOOOAL!!!!!! 1-1 AND BROCK-MADSEN RUNS OVER TO RYKER TO CELEBRATE AS BOOS RING AROUND THE STADIUM! RANDERS HIT BACK!

35:21 Borring from his own half here, looks up he sets up for a shot surely not! GOOOOOOOAL!!!! HE HAS CHIPPED THE KEEPER FROM HIS OWN HALF!!! DAVID BECKHAM ESQUE!!! SENSATIONAL!!!! I CAN NOT BELIVE WHAT I HAVE SEEN!! AND NEITHER CAN RYKER WHO FIST PUMPS THE AIR IN JOY!! 2-1 RANDERS!

45:00 Amankanwaa to Larsen he jinks past Fenger, what a shot! Saved but it falls for AMANKANWAA!!!! 2-2 2-2 2-2!!!! RYKER CAN HEAR THE F.C. FANS CHANTS CLEARLY NOW! I WILL NOT REPEAT THEM ON T.V BUT RYKER WILL NOT BE ENJOYING THIS EXPERIENCE!

78:46 Sam Baldock has done next to nothing here today but I wouldn't put ti past him to pop up with a winner. Short pass to Brock-Madsen who zips it out to Borring. Drills the ball BALDOCK!!!!!!!!!!!!!!!!!!!!!!!!! GOOOOOOOOOOOOOOOOOOOOOOOOAL!!!! IT'S 3-2! AND RYKER IS OFF HE SPRINTS DOWNT HE TOUCHLINE KISSING THE RANDERS BADGE AND DOES A JOSE ESQUE KNEE SLIDE INFRONT OFF THE HOME FANS AND PUMPS HIS FISTS EMPAHTICALLY!!! RANDERS LEAD LATE ON!!!

89:00 Brock-Madsen with the ball on his weak foot just outside the area, he flicks it around and VOLLEYS IT HOME!! 4-2 THAT HAS SECURED THE WIN!!!! RYKER IS ESTATIC!

Unpleasant scenes here as Jensen offers his hand to shake the F.C. managers hand who has refused to shake Jensen's hand and walks off. Jensen is not having any of it and he runs after his opposite number and has had to be pulled away from a confrontation by several of his own coaching staff!! !Kensen is not best pleased!!


I stromed into my teams dressing room and joined in the celebrations in the dressing room, the players knew how much this meant for me and they had not dissapointed. I looked at all them and told them " You guys are immortal to me... Never forget that!" Then I ran out of the dressing room to celebrate with the away fans! I was loving it! The Randers fans were lapping it all up it was a time not to forget!
Login to Quote

Jozef
9 years
Great result Beany,Keep winning those games and you could win the league
Login to Quote