I sat in my office and stared at the result sheet.... I was in pain still at that humiliating defeat to Sonder 5-0 killed me inisde. I was disciplined by the Danish F.A for storming down the tunnel at 3-0 and not coming back. I wasn't going to stand in the pouring rain and watch that rubbish!! But things have improved recently bu need to cut out the draws! 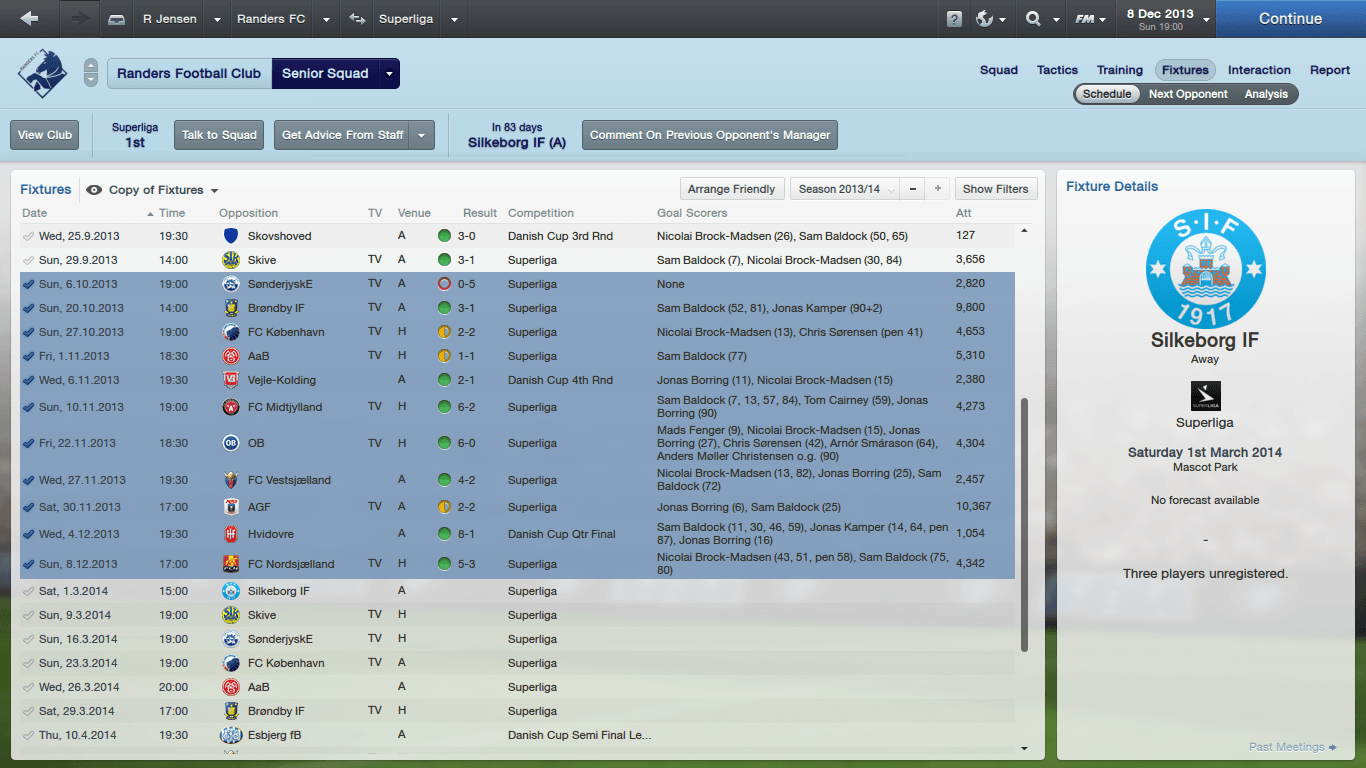 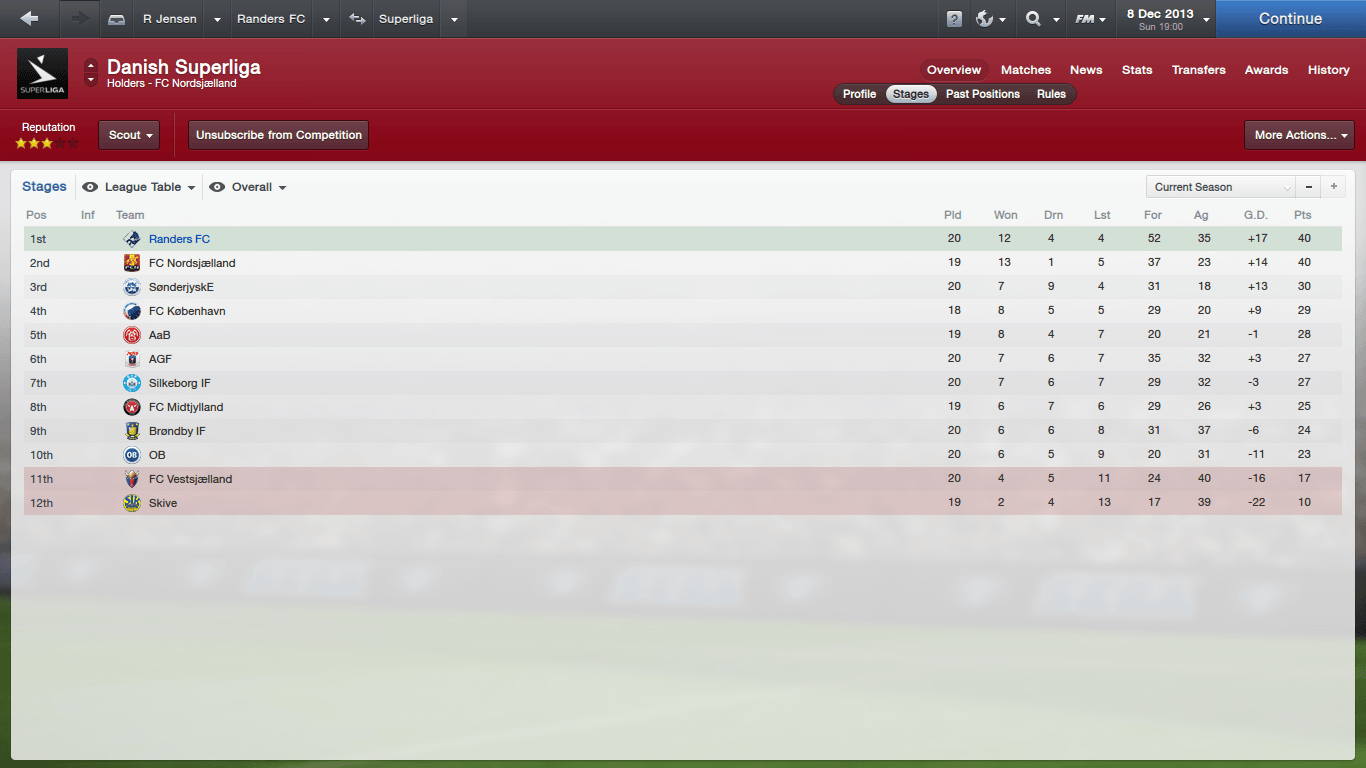 
Player of The Month:

I have decided to give this to Brock-Madsen. Even though Baldock scored a stupid amount of goals he scored every game nearly whereas Baldock scored loads in a few games. But a big round of applause to Baldock who got a perfect 10.00 rating agaisnt Hvidovre!

Goal of The Month:

Baldock's fourth against Hvidovre. He ran the length of the pitch and dinked the ball over the keeprs flailing right arm as he dived at his feet.
Login to Quote

k1rups
9 years
I think that's better than an average month :p but that 5-0 loss is pretty poor haha didn't stop you from getting to the top of the table though! Congrats mate
Login to Quote

Shock Gap Opens At The Top

"It's in to Baldock!!!!! Randers win again, news just in Nordsjealand have lost their game at home!Randers have now got a gap at the top".

I was doing my usual clap to the home fans when Brock-Madsen ran over to me to tell me that Nordsjealand had lost there match! We were six points clear. I few weeks ago we just thought we will do ourselfs proud and stick with them till the end, now we have a very good chance of winning the league. The fans had also just heard the news as loud chants of "We are top of the league" went around the stadium. Even they could not beleive that we were now top, but we were not going to slip up. e are going to stay top and bring this title home! 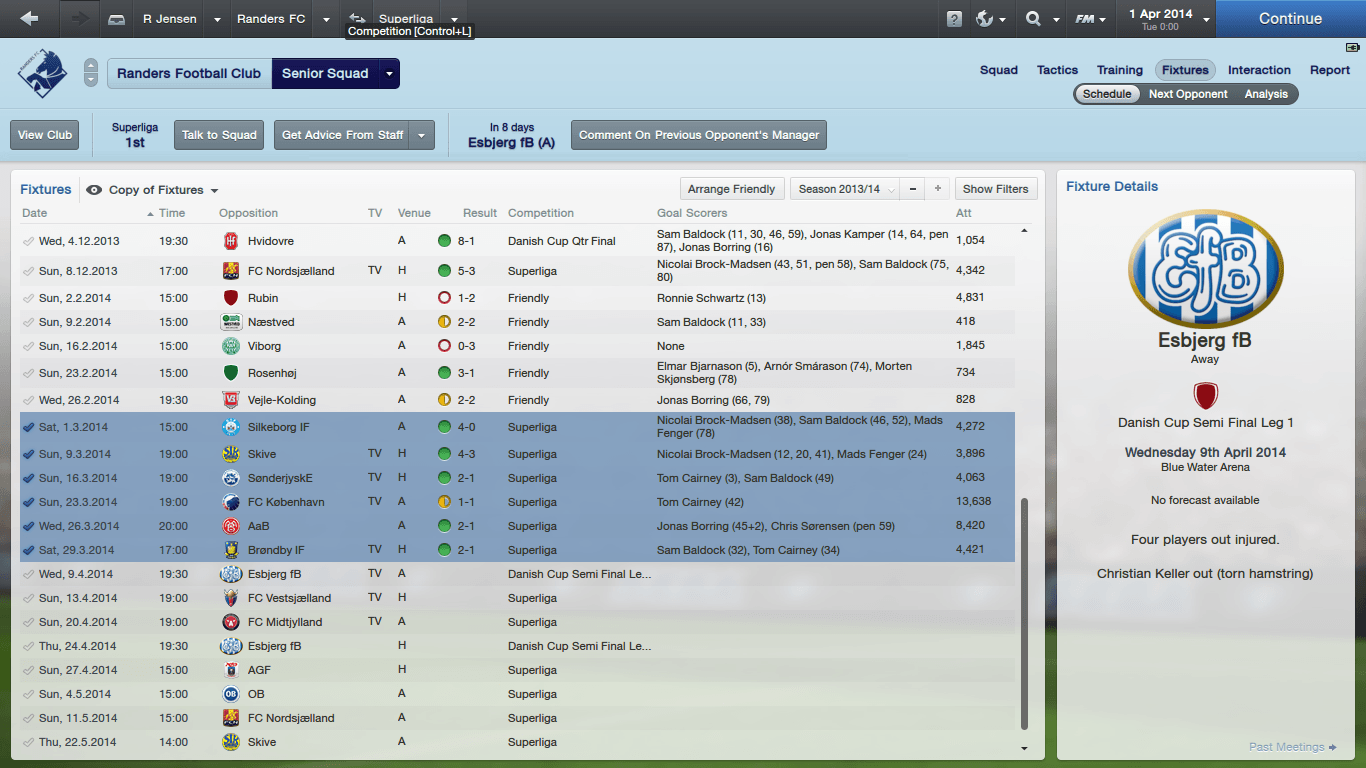 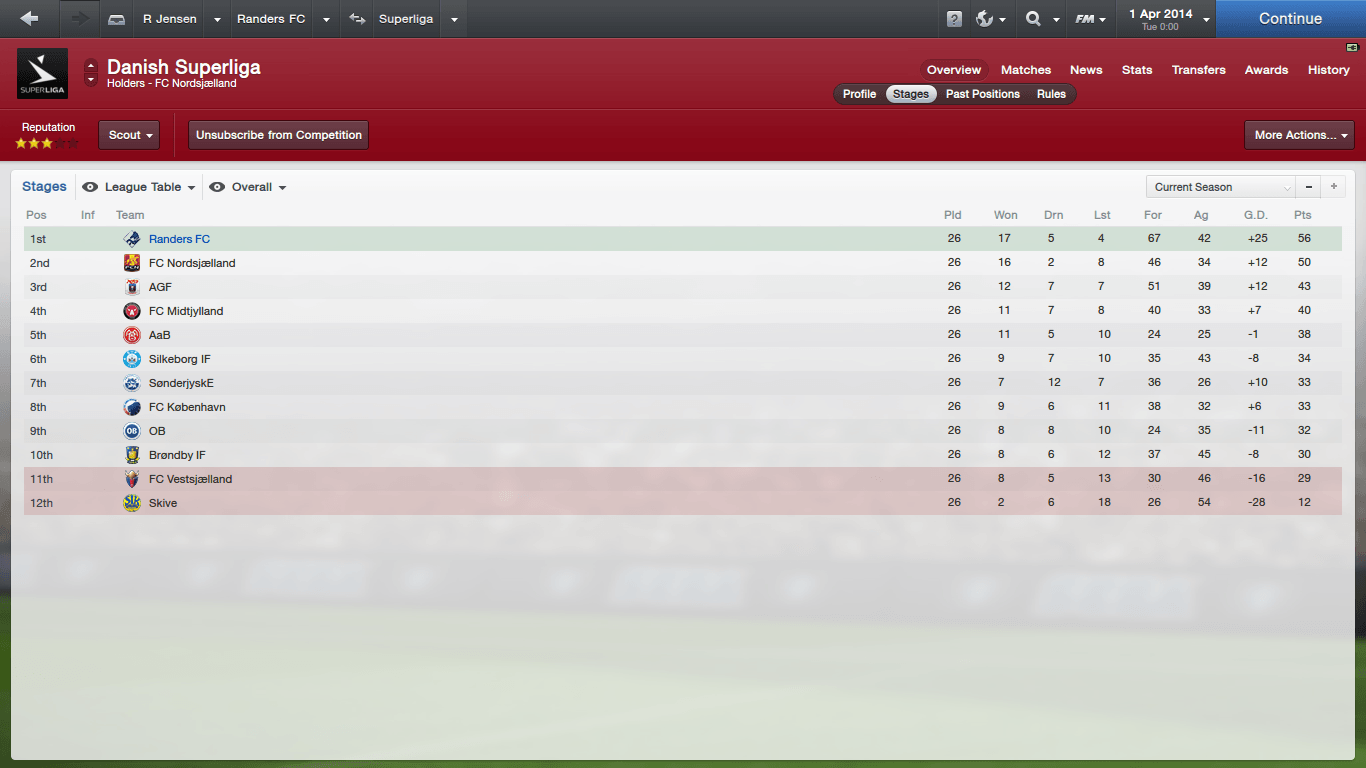 
Player of The Month:

Yet again it is Sam Baldock who scored another four goals this month on route to a six point gap at the top. He has been sensational nearly every month and that vain of from continues.

Goal of The Month:

Goes to my center back Fenger who scored a great over head kick from seven yards out from a corner!
Login to Quote

Finally top of the league

Also, it would appear that Nordsjaelland lost two games on the trot

Finally top of the league

Also, it would appear that Nordsjaelland lost two games on the trot

Yeah all going well! And they lost twice so now I have a 6 point lead

edu1878
9 years
Great job going top. Hope you can stay there for the long run. Keep it up.
Login to Quote


Thanks mate!
Login to Quote

That was pointless.
Login to Quote

k1rups
9 years
Couple of tough defeats but still at the top mate! Keep it up Beany and that title will be yours!

P.S damn you Glenn I was about to be the 100th post :p
Login to Quote

Louis: Haha thanks for that....

We won our last two games easily and the title was no ours the miracle at Randers was complete and the fans were loving it!! To make it even better my old club F.C. were relegated! 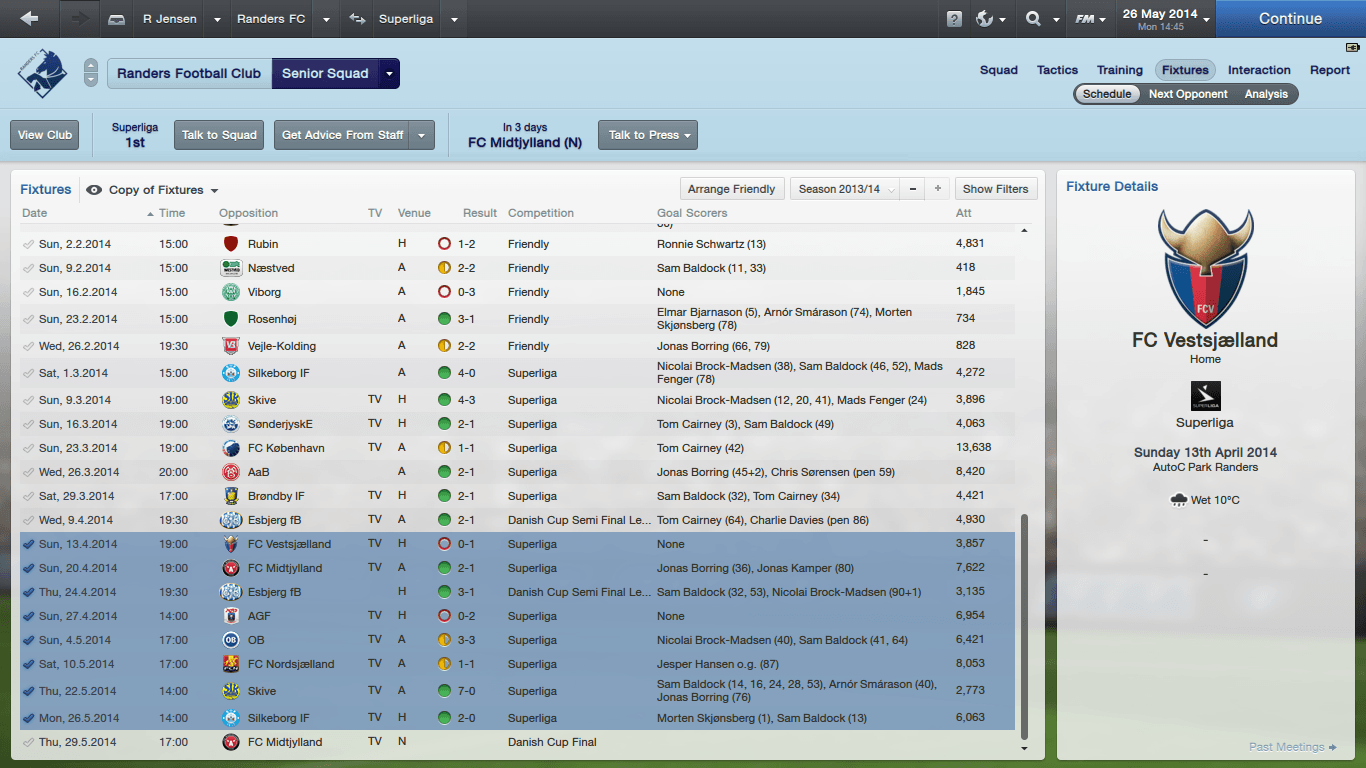 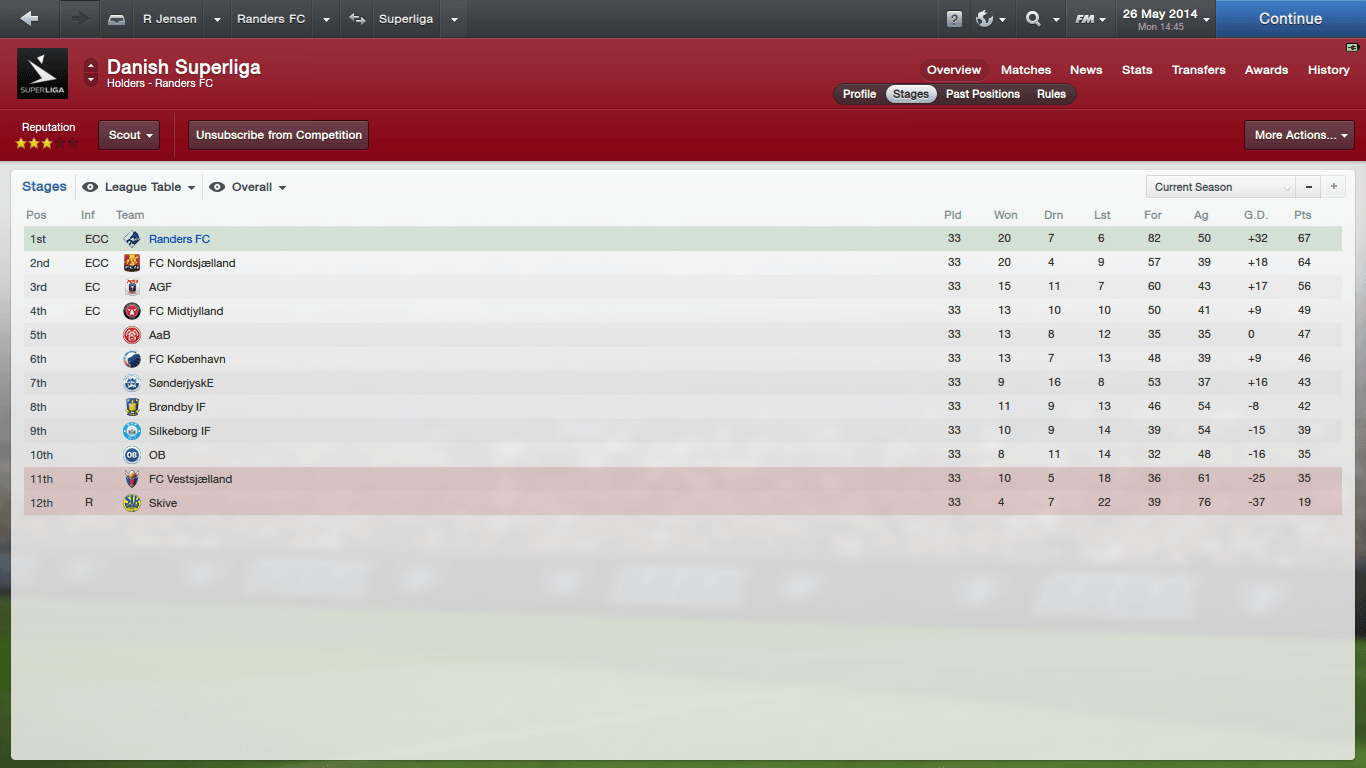