Nice decision in selling those 5, they were just taking money out of the wage bank

Nic
8 years
@Alex, I had to reread that to make sure I didn't read what I thought haha.

But agree with the sells, good pre-season helps you on your way to an great season.
Login to Quote

LFC
8 years
Anyone interested in seeing any tactics, player screens or anything else, just let me know! 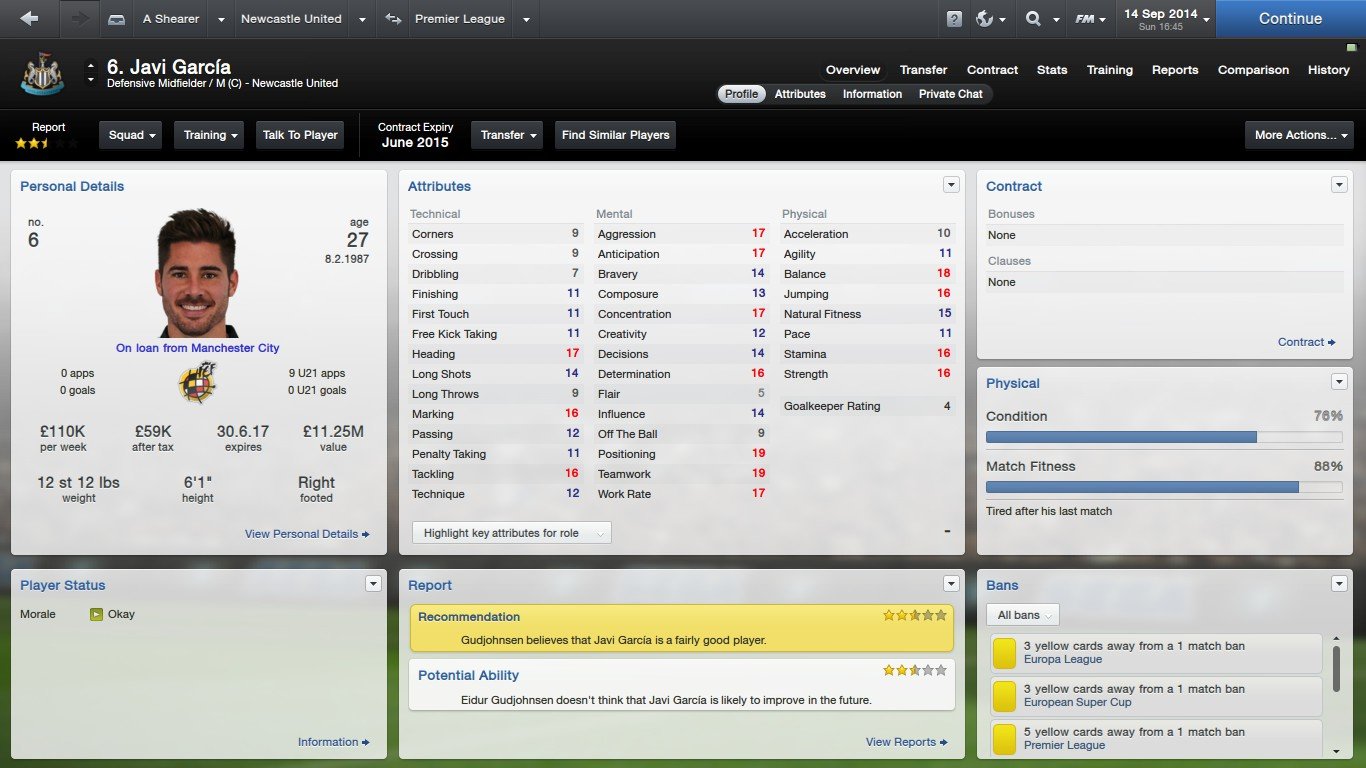 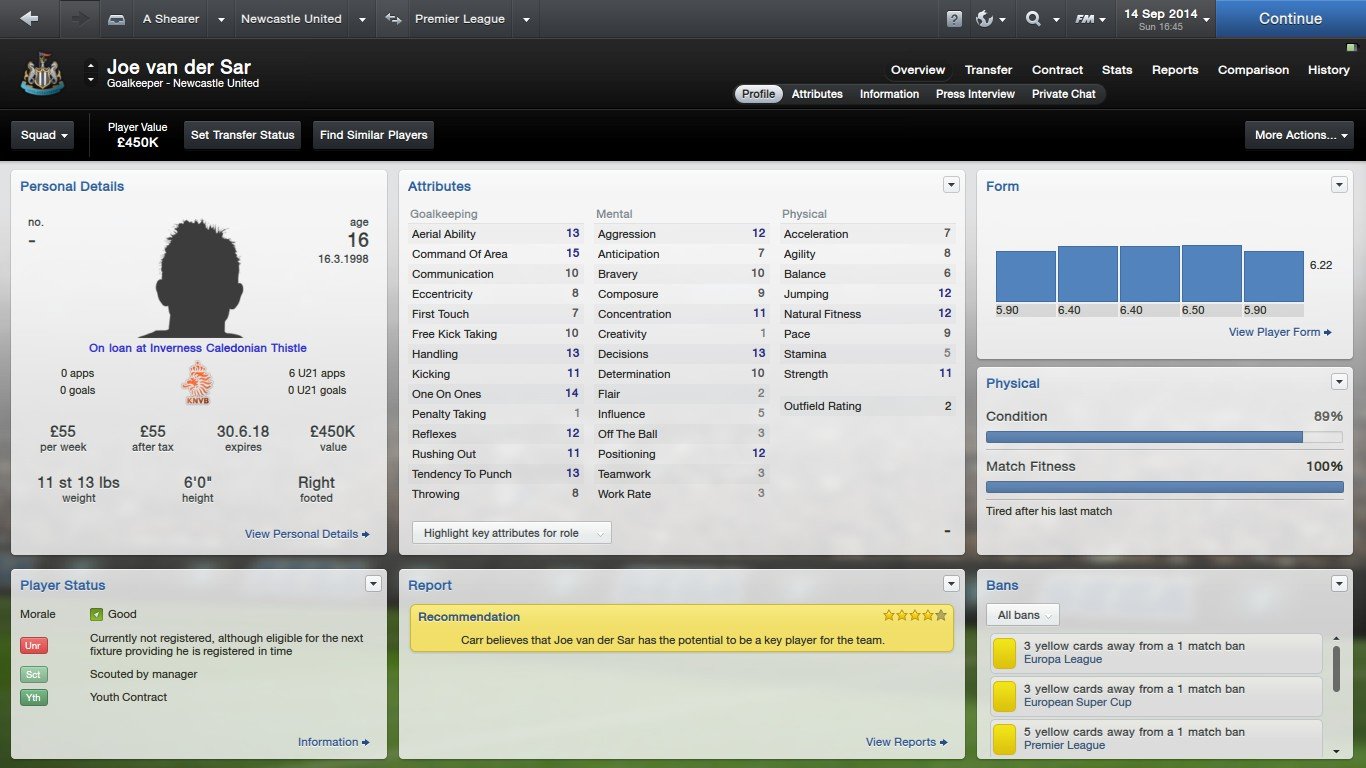 Walter
8 years
I like Javi Garcia, hope he does well for you!

Newcastle began their Premier League campaign off the back of a fantastic 3-2 win ocver Manchester United in the Community Shield. Their first game was against Bolton Wanderers, with their over game being against Everton. They will also compete in the prestigious European Super Cup against global giants Barcelona. 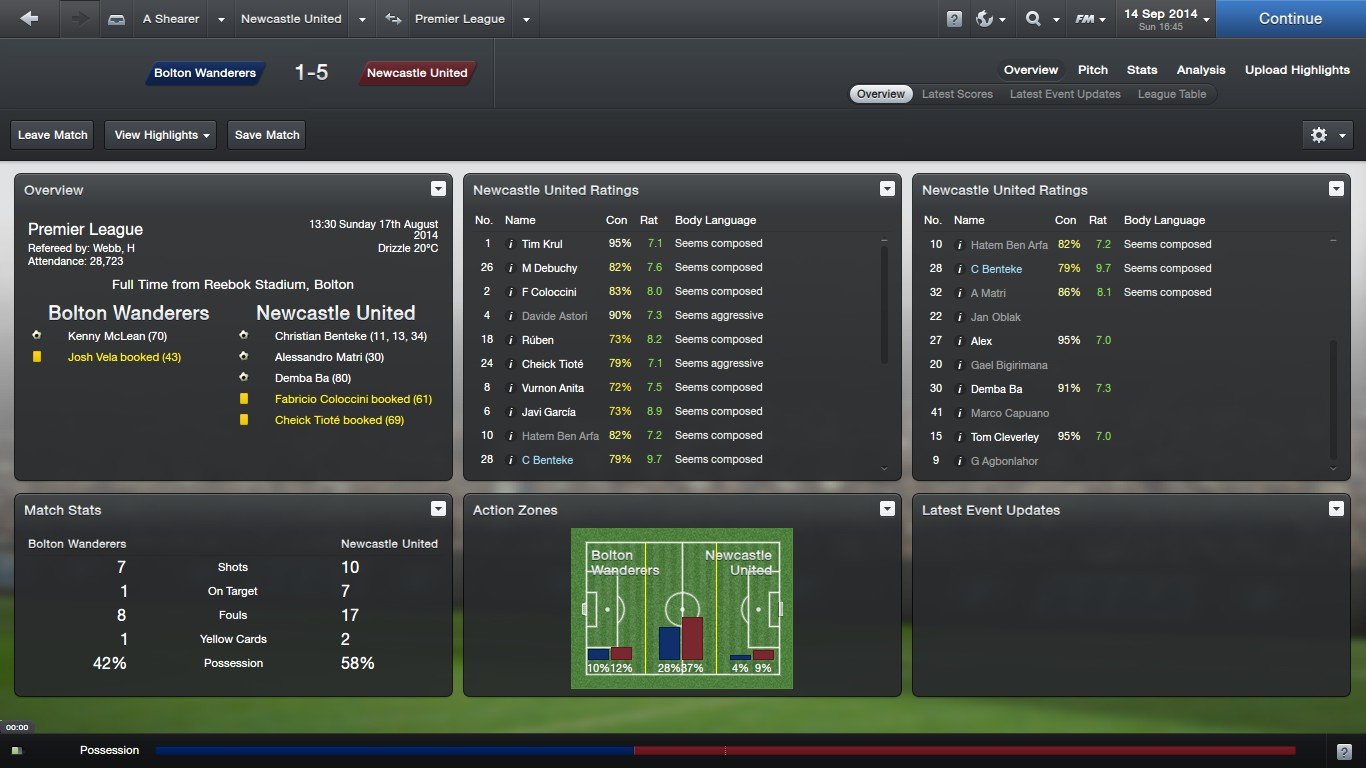 
Newcastle's first game of the new season saw them make the trip to Lancashire to face Premier League new boys, Bolton Wanderers at The Reebok Stadium. Newcastle took the lead when Alessandro Matri headed Hatem Ben Arfa's pass into the box, where new signing Christian Benteke was waiting and volleyed it in coolly. Just two minutes later, Benteke was at it again. This time, Portuguese fullback Rubén delivered a cross from out wide which Benteke nodded in. Just after half an hour had been played, Javi García played in a fantastic cross to Italian striker Alessandro Matri, who had so much space. He picked the ball up, before smashing it into the top corner past the stunned goalkeeper. Only four minutes later, Tim Ream was caught in possession at the back by Matri, who tackled him. He went through on goal with no defenders in sight before squaring to Benteke who scored for his hat-trick in his league debut for Newcastle. After half time, Bolton pulled one back when Kenny Mclean's 20 yard free-kick bent into the top corner. It was a fantastic goal which Tim Krul couldn't do anything about. Ten minutes later, Newcastle scored the final goal of the game when loanee Demba Ba poked in Benteke's cross. The final score was 1-5 and Newcastle couldn't have asked for a better start to their season.
Attendance: 28,723. 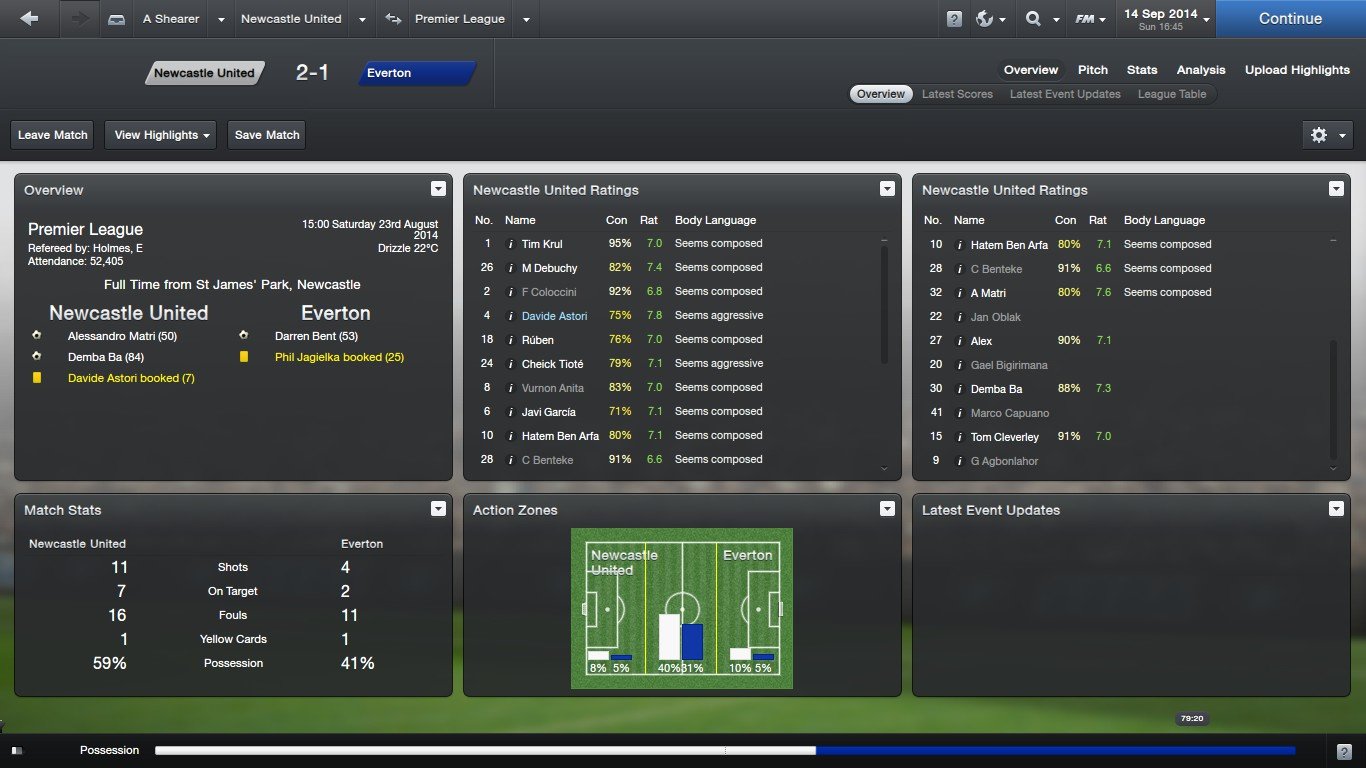 
Newcastle hosted Everton in their first home game of the season, after their impressive 5-1 win over Bolton Wanderers on the opening day. There were no goals in the first half but Newcastle looked much more likely to make something happen. Five minutes after half time, center back Alex played a lofted ball to the head of Hatem Ben Arfa, who flicked the ball on to Alessandro Matri. Matri volleyed it first time into the bottom corner, past the helpless Tim Howard. Three minutes later, Everton were level after Darren Bent headed in Gareth Barry's cross. With just over five minutes to play, Demba Ba, who was brought on at half time to replace Christian Benteke, pushed a weak header towards goal from Mathieu Debuchy's cross. However, the ball was aimed into the far post and Tim Howard couldn't get down to save it and Ba had his second of the season. Attendance: 52,405. 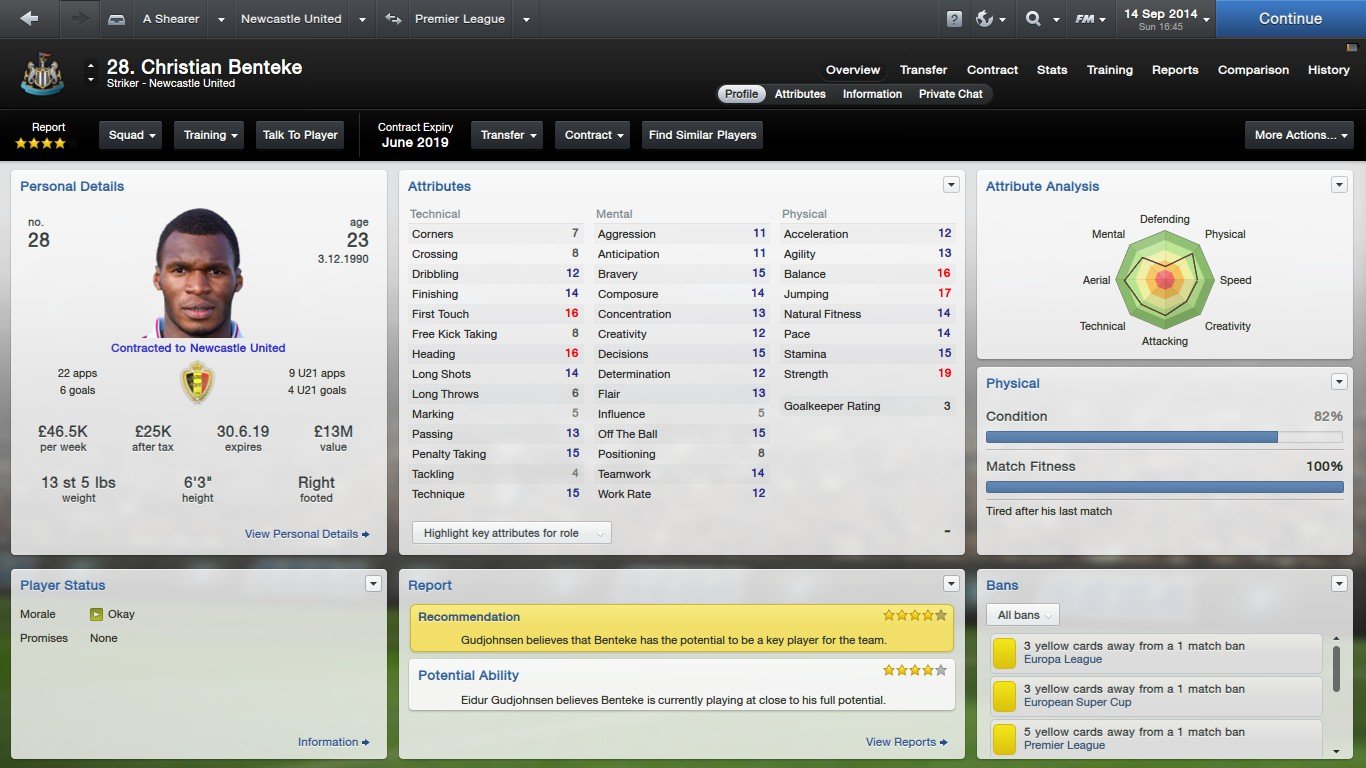 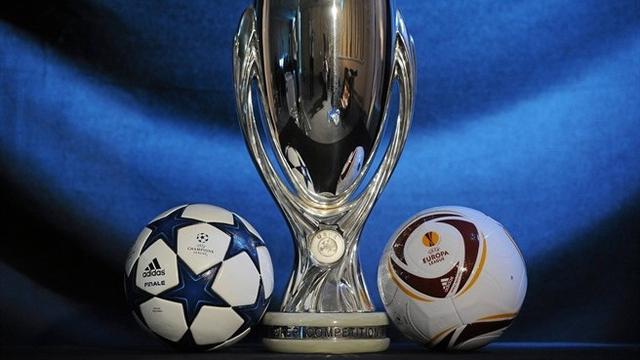 Hello and welcome to this evenings live coverage of the European Super Cup here at the Cardiff City Stadium in Wales. Thanks for joining me Faustino Asprilla and my co-host for the evening, Michael Laudrup. We should be in for a good match here. Many people call this the 'cup winners cup' because both teams won European competitions to earn the right to play here. Barcelona won the Champions League last season while Newcastle won the Europa League. Many people are making Barcelona the favourites for a victory today and they are suggesting they could score a few goals as well. The match has kicked off down below us, so lets get on with the match commentary.
0': Newcastle kick off the match with Christian Benteke passing the ball back to Fabricio Coloccini.

7': Young Barcelona winger Gerard Deulofeu whips in a corner, which Davide Astori heads behind. But German referee Wolfgang Stark has given a penalty! Moussa Sissoko was adjudged to have pulled Lionel Messi's shirt! Messi doesn't know what's happening and I don't think he was looking for that. I think that Mr Stark has got that decision wrong. Barcelona would have been happy to have another corner.

8': Lionel Messi steps up to take the penalty... he fires it low into the bottom corner. Tim Krul got a hand on it but couldn't keep the shot out. 1-0.


25': Gerard Deulofeu picks up Cesc Fàbregas's short pass out wide. He cuts inside here before passing to Lionel Messi. Fabricio Coloccini attempts to tackle but only trips Messi. Free-kick and Coloccini picks up a yellow card. Lionel Messi is standing over the ball here, 23 yards from goal. Messi strikes it... but the wall jump up to defend and it goes behind for a corner.


31': Lionel Messi receives the ball in the center of Newcastle's half. He knocks a ball out wide to fullback Martín Montoya who knocks it to Fàbregas who is waiting on the edge of the penalty area. He plays the ball to the youngster Deulofeu who is overlapping him. He delivers a dangerous cross, which Davide Astori attempts to head back to Tim Krul. However it bounces off of Fabricio Coloccini and into the path of Messi... and he fires past Newcastle goalkeeper. 2-0.


37': Deulofeu whips in another corner which finds the feet of Messi. Messi takes a touch and shoots... but he hits the post!! So unlucky! Most of the crowd here thought that was in!! Barcelona with complete dominance so far in this match and it has been reflected in the scoreline.


42': Newcastle fullback Rubén takes the ball out to the left flank. He skips over the challenge of Montoya before playing a brilliant ball down the line to Alessandro Matri. Are Newcastle about to have their first chance of the match? Matri tries to go back to Italian center back Davide Astori who is waiting on the halfway line. But the pass is terrible!! He's barely got anything on it and now it's a 50/50 race to the ball between Davide Astori and Barcelona's Neymar. It looks like Neymar will win it but he still has to get past Astori. And he does so!! He's through on goal with no defenders in front of him! Fabricio Coloccini closes in on him from behind here as Neymar cuts inside. Neymar tries a spectacular chip from the byline!! AND IT'S GONE IN!!! WHAT A GOAL! YOU WILL NOT SEE MANY BETTER THAN THAT! BRILLIANT! KRUL DIDN'T HAVE A CHANCE! 3-0!


45': The referee blows for half time. Newcastle have been outclassed here but it has been no less than the fans were expecting. They won't be too disappointed with their performance and will be happy that they haven't conceded more. They aren't expecting to win here so it'll just be good experience for them. Let's get back to the commentary as the teams are back out for the second half.

SH 45': Barcelona kick off here, with Luis Suárez coming on at half time.


90'+1: After a quiet second half, which was a lot less one sided than the first half, the referee blows for full time. Congratulations to Barcelona who have won the trophy here but also a well done to Newcastle who played very well today but just couldn't get the result. A win for Barcelona like most people expected. 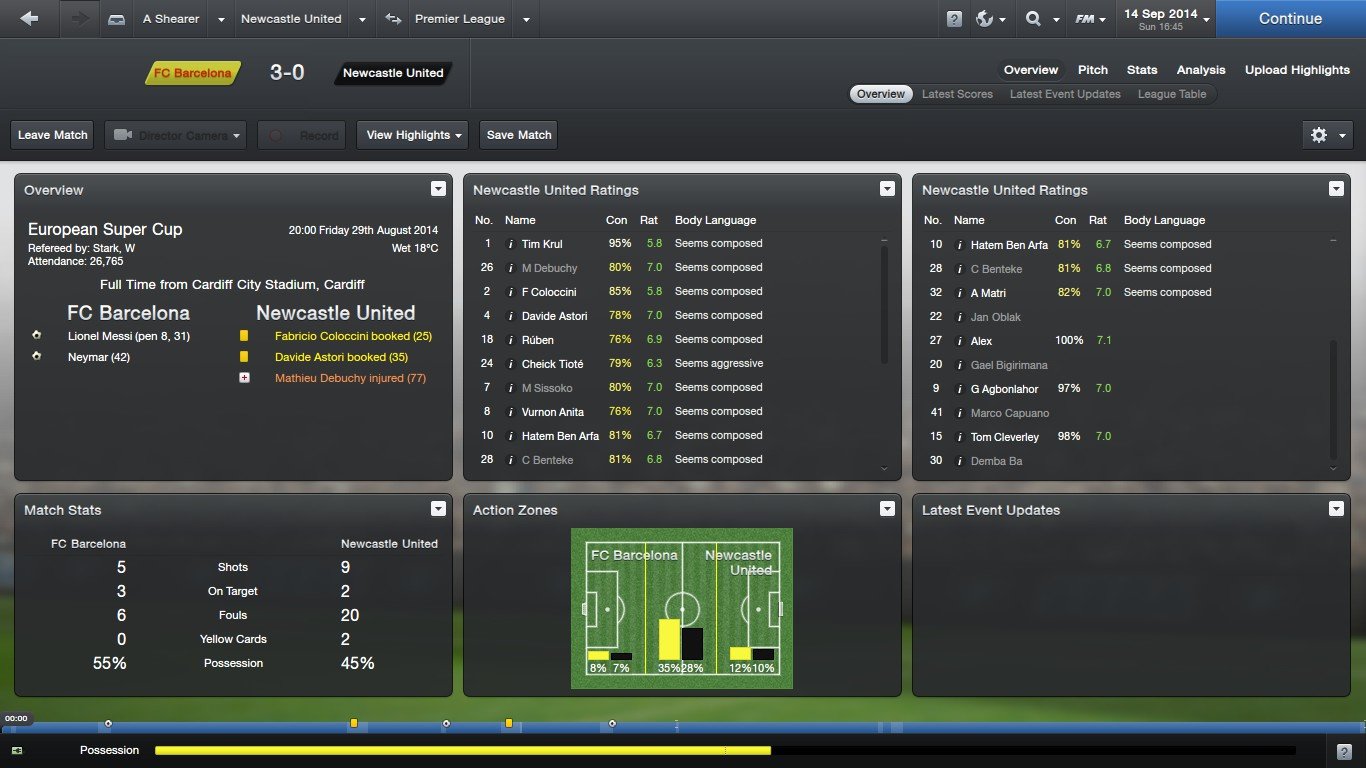 Walsall_Craig
8 years
Joe Van Der Sar looks to have good potential, and unlucky in the Super Cup against Barcelona, they were my bogey team in my City story

good luck for rest of season!
Login to Quote

Walter
8 years
Unlucky in the final. Barça are always hard

LFC
8 years
Thanks, yeah especially when you're Newcastle