Nic
9 years
The signings you made are great, although a few questionable ones if i'm being honest, but if you can make a profit it makes it all fine!


Although some other signings will have the toon singing.

As for the results, Tough draw against the gooners, although it could have gone worse so good result

Man United = lets move on, take the positives where you can and give them a kick in the arse.

Liverpool = good job against a team who can cause troubles if on there game, so good job

What a tough month

Although a great first leg against blue half of Manchester the 2nd leg fade out will hurt, but shows a lot of positives so great job.

Keep it up and good luck with the future months.
1

LFC
9 years
Thanks, Joauqin was the chairmans signing
Login to Quote

It was a less hectic month for Newcastle as they only played four games. Last month they played nine games. Their league games were against Southampton, West Ham and Swansea whilst they played in the FA Cup 5th round against Sheffield United. Results below. 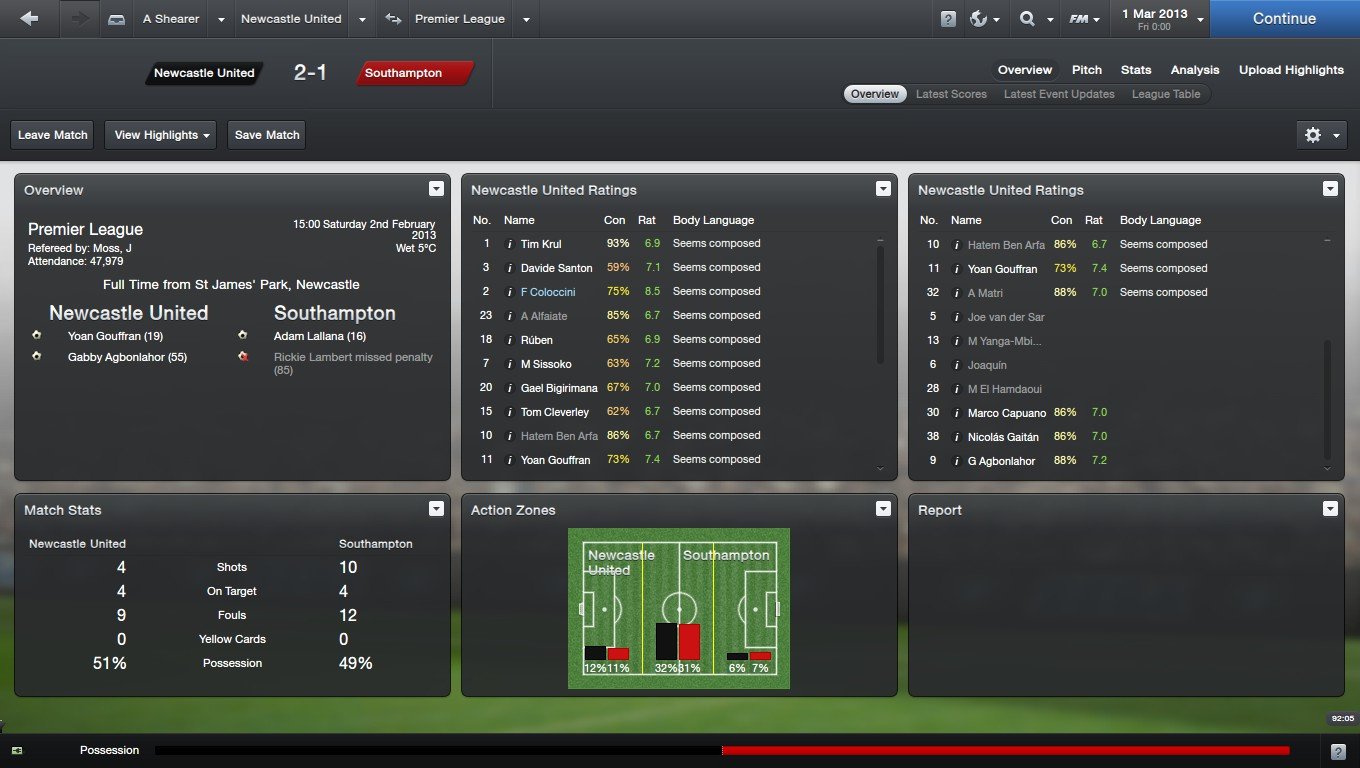 
Newcastle kicked February with a home game against Southampton. Southampton took the lead when Tom Cleverley's pass was intercepted by Adam Lallana. Lallana carried the ball forwards before passing to Dean Hammond in the penalty area. Hammond knocked the ball back to Lallana who fired past Tim Krul. Newcastle equalized three minutes later when Alessandro Matri ran from his own half before passing to Yoan Gouffran on the edge of the area. Gouffran looked up before striking the ball down to Artur Boruc's right. After half time substitute Gabby Agbonlahor scored when Nicolás Gaitán played an exquisite through ball to him. He took a touch before poking it into the bottom corner. Southampton had a chance to equalize when Coloccini tripped Lallana in the penalty area. Rickie Lambert stepped up to take the penalty. However he kicked it straight into the welcoming arms of Tim Krul. Fabricio Coloccini thanked manager Alan Shearer for the praise that he gave to Coloccini after the game. Attendance: 47,979. 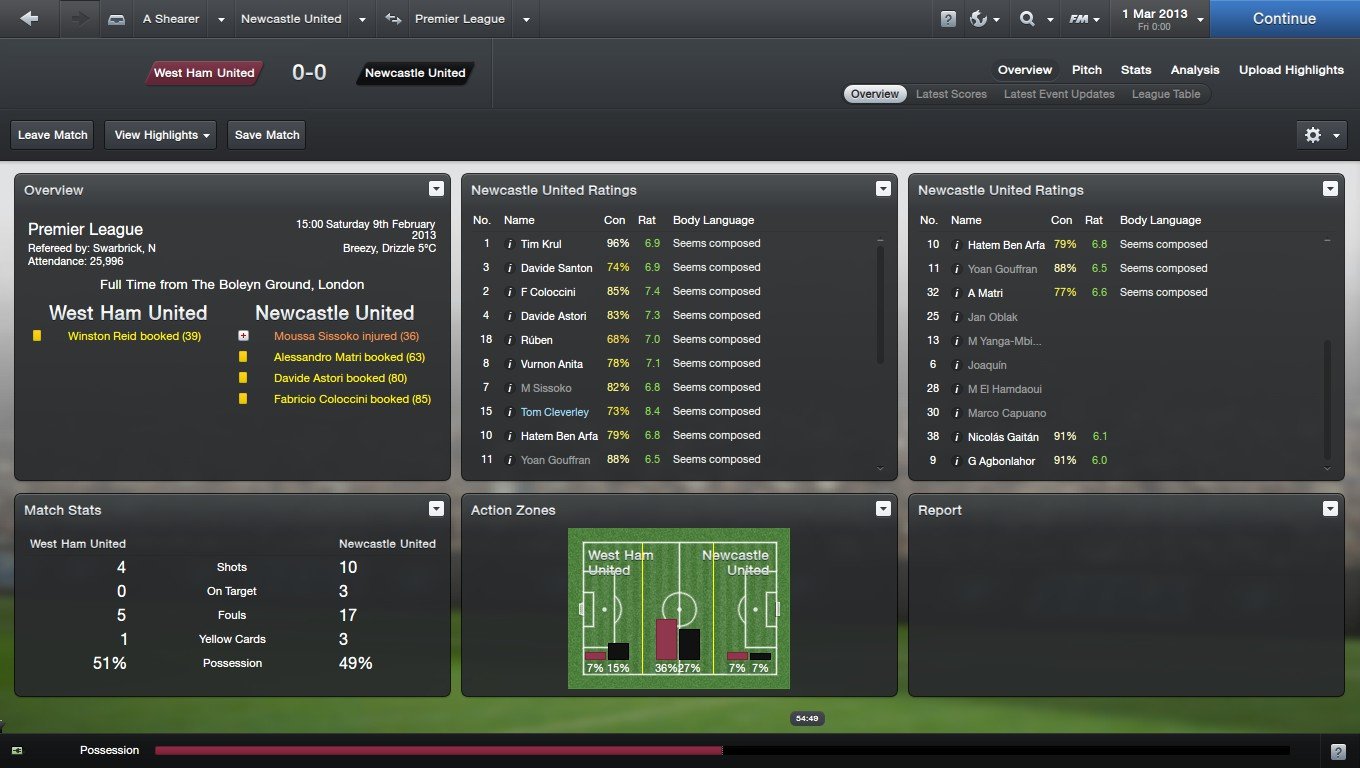 
It was a disappointing result for Alan Shearer and Newcastle as they could only manage a goalless draw away to bottom side West Ham. Newcastle had ten shots on goal but failed to take their chances and missed out on the win. Attendance: 25,996. 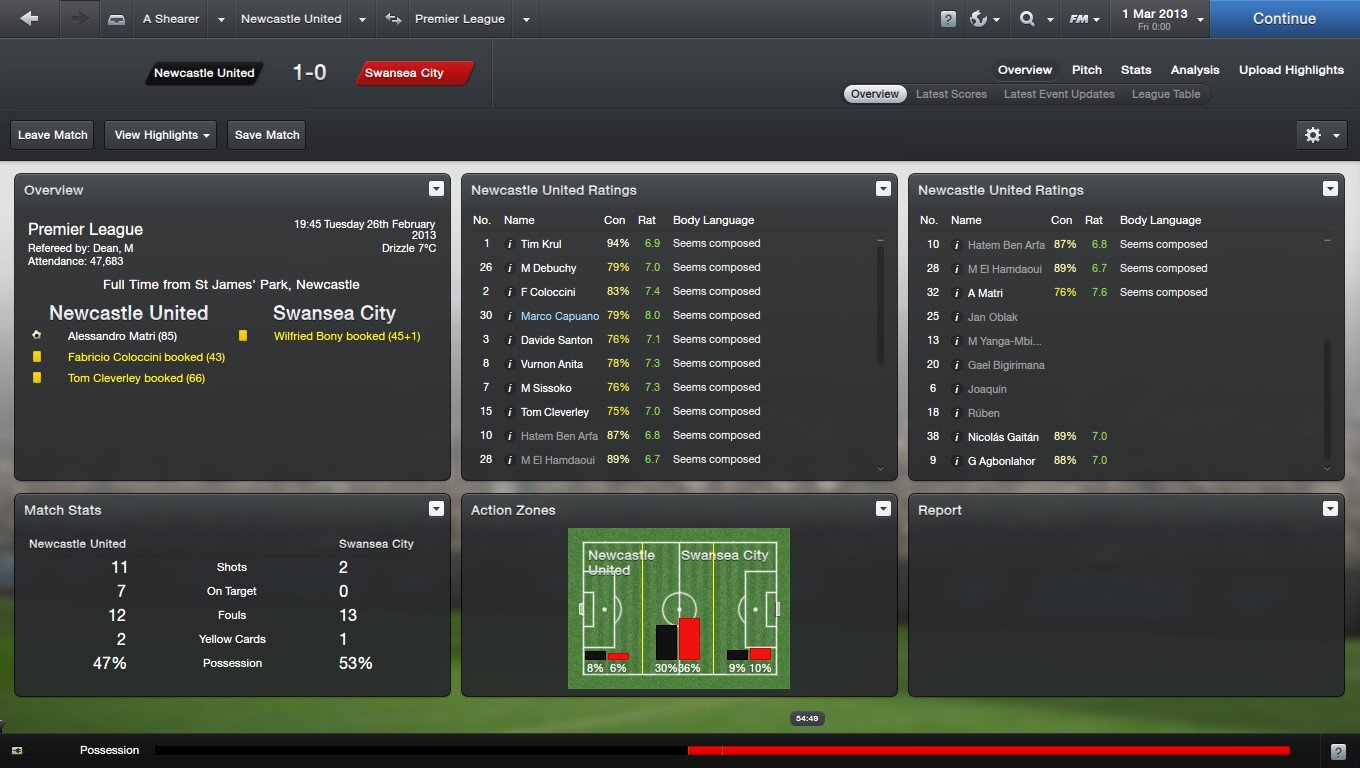 
Newcastle hosted Swansea in their last game of February. It was a goalless first half, with Newcastle dominating possession. The second half kicked off with Newcastle continuing to dominate. As the game neared the end, new signing Marco Capuano cleared the ball forward to fellow Italian Alessandro Matri. Matri took a touch to bring i past the last defender, before firing low to Michel Vorm's right. Attendance: 47,683. Newcastle had beaten Chesterfield and West Ham to reach the FA Cup 5th round against Sheffield United. It was a quiet game at Bramall Lane with no goals scored in either half. Italian center back Davide Astori caused the only talking point of the game when he was sent off for a challenge on Harry Maguire which earned him a second yellow card. There will now be a replay between the two sides at St James's Park next month. Attendance 32,609.

Our Player Of The Month award goes to captain Fabricio Coloccini. The team only conceded three goals with him leading the back four. The Young Player Of The Month award goes to Rúben who took over the place of Davide Santon as left back in two of the four games played this month with an average rating of 7.28. 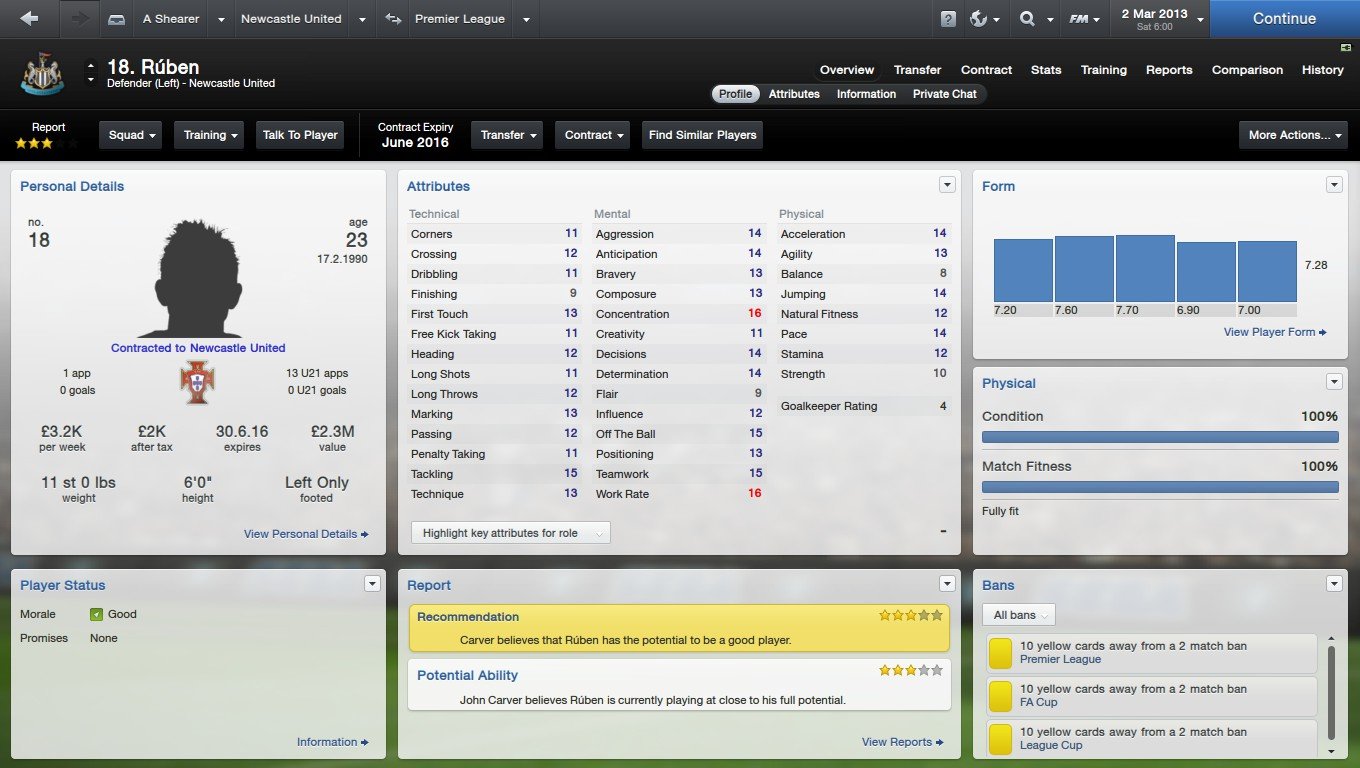 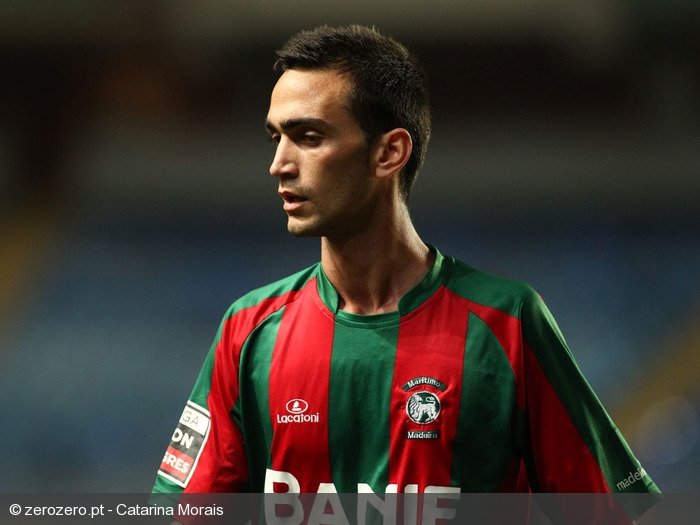 The Goal Of The Month award goes to Alessandro Matri VS Swansea. Marco Capuano cleared the ball forward to Matri. Matri took a touch to take it away from the defender before firing low into the goal past Michel Vorm.
Login to Quote

LFC
9 years
Thanks yeah, I'd be very happy just to qualify for the Europa League, having predicted a mid-table finish. I think I could do it as I think I'm 10 points clear of Arsenal in 8th
Login to Quote

Newcastle neared the end of their Premier League campaign as they went into March in 5th place. They played three league games, against Sunderland, Fulham and Tottenham. They also played their FA Cup 5th round replay against Sheffield United. 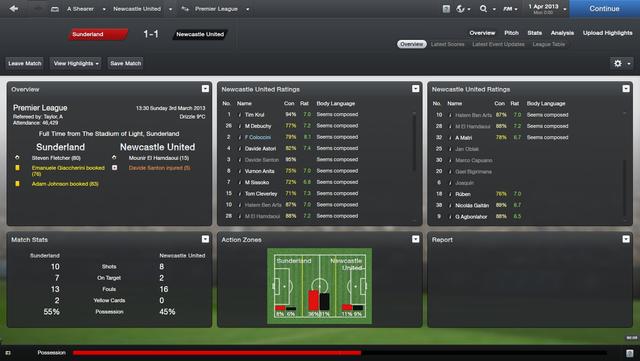 
Newcastle looked to do the double over their neighbors as they made the short trip to Sunderland's Stadium Of Light. Mounir El Hamdaoui opened the scoring for Newcastle when Hatem Ben Arfa knocked a ball through to him. El Hamdaoui took a shot which Westwood got his hand to but it was too powerful for him and the ball ended up in the back of the net. With the game nearing an end, Steven Fletcher equalized for Sunderland when he nodded in Adam Johnson's corner. In the fifth minute of the match, Italian left back Davide Santon picked up an injury which will see him sidelined for the rest of the season. Attendance: 46,429. 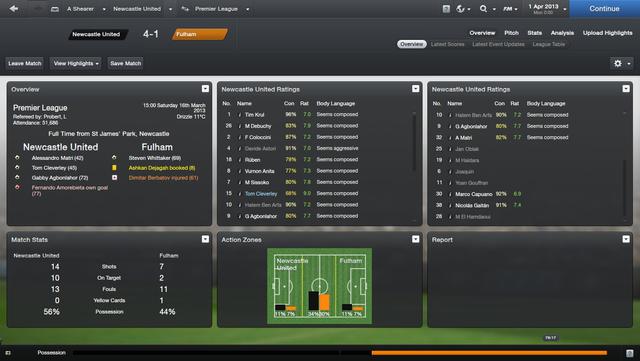 
Having been held to a draw by local rivals Sunderland, Newcastle looked to win their first game in March as they hosted Fulham. The Magpies opened the scoring when Moussa Sissoko crossed the ball to Alessandro Matri who fired the ball into the bottom corner. They scored their second before half time when Hatem Ben Arfa's corner found Davide Astori who passed it to Tom Cleverley who gratefully tapped it in. Fulham pulled a goal back when Dejan Stankovic's corner found Steven Whittaker who nodded the ball past Tim Krul. Newcastle restored their two goal lead when Gabby Agonlahor picked up Nicolás Gaitán's pass and fired it past the Fulham keeper. The match ended 4-1 after Fernando Amorebieta headed Tom Cleverley's cross into his own net. Attendance: 51,686. 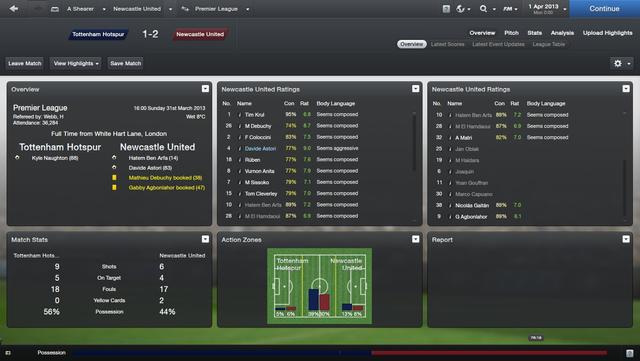 
Newcastle would move up to 4th place if they beat 5th placed team Tottenham. The match at White Hart Lane was an important one for both sides as they continue the battle for 4th place. Newcastle hit Spurs on the break as Alessandro Matri picked up Matheu Debuchy's long ball. Matri played it to Hatem Ben Arfa, who took the ball round Hugo Lloris before tapping it into the empty goal. With less than ten minutes to go, Newcastle broke away again and earned themselves a corner. Nicolás Gaitán's corner found Davide Astori, who powered a header into the net. Five minutes later, Tottenham pulled one back when Sosa's free kick found Kyle Naughton who volleyed it past Tim Krul. However it was not enough as Newcastle sealed a crucial win over positional rivals Spurs. Attendance: 36,284. 
Having drawn 0-0 at Brammal Lane, Newcastle were favorites to beat Npower League 1 side Sheffield United as they hosted at St James's Park. However, Sheffield United center back put
them into the lead when he headed in Ryan Flynn's corner. Ten minutes later, Mounir El Hamdaoui volleyed in Rúben's cross. With less than ten minutes to go, Sheffield United player Michael Doyle was sent off for a second yellow card. The game went all the way to penalties, where Matheu Debuchy had to score to keep Newcastle in the shootout. He stepped up to take it. However, his shot was saved by keeper Mark Howard. Attendance: 38,323.

The Player Of The Month award goes to new signing Mounir El Hamdaoui who scored two goals for Newcastle including one against rivals Sunderland. 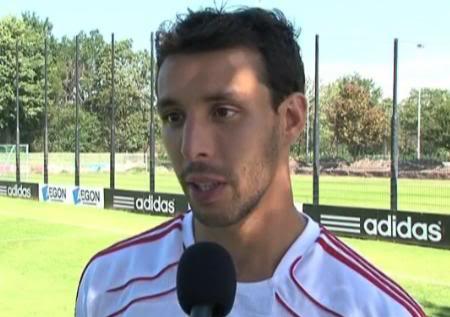 The Young Player Of The Month goes to Vurnon Anita, 23, who played consistently in all four games. 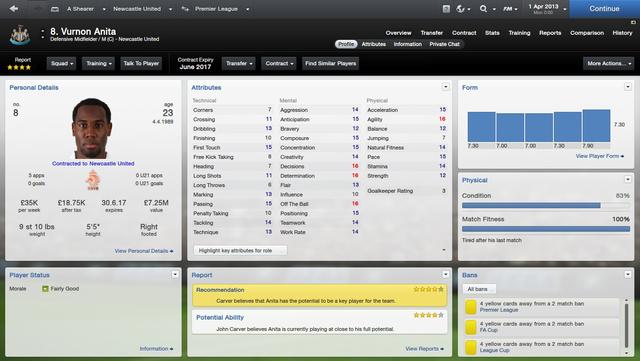 Alan Shearer finished in 3rd place in the Barclays Manager Of The Month award after picking up seven points from a possible nine. 
Unlucky injury's! But you got great cover keep it up
Login to Quote

Yeah gutted about santon but new signing Ruben has covered well so far.
Login to Quote

Justice
9 years
No words can describe this

Disappointing April For The Magpies

Newcastle continued their impressive Premier League campaign as they got nearer to the end of the season. They played four games in April against Manchester City, Everton, West Brom and Stoke. Results below. 
Newcastle hosted league leaders Manchester City in their first game in April. The hosts took the lead when Gabby Agbonlahor tackled Gareth Barry on the edge of the Man City penalty area before crossing it to Alessandro Matri, who volleyed it in. The visitors equalized when substitute James Milner smashed Yaya Toure's pass against the post and into the net. He won the game for City when Micah Richards knocked a ball into the penalty area for him which he converted with ease. Attendance: 52,405. 
Having been defeated in their last outing, Newcastle wanted things to change when they visited Merseyside to play Everton. The only goal of the game came when Everton winger Magaye Gueye picked up Leighton Baines's great through ball and fired past Tim Krul. This put a slight dent in Newcstle's European qualification campaign. Attendance: 32,590. 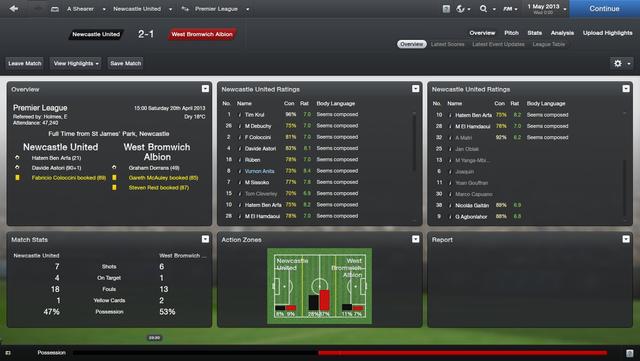 
Newcastle, having lost both of their games in April so far, looked to improve that record with a win over West Brom. The game kicked off at St James's Park and the scoreline was 1-0 to hosts Newcastle with just over 20 minutes gone. Hatem Ben Arfa scored when West Brom fullback Billy Jones attempted to head the ball back to Ben Foster. However he didn't connect with the ball and Ben Arfa cut it out and made a diving header pay off as he shocked Foster. West Brom equalized after the break when Graham Dorrans picked up Billy Jones's ball before firing it in at the near post. With less than half a minute to go, Nicolás Gaitán's corner found Davide Astori who powered a header past Foster. Attendance: 47,240. 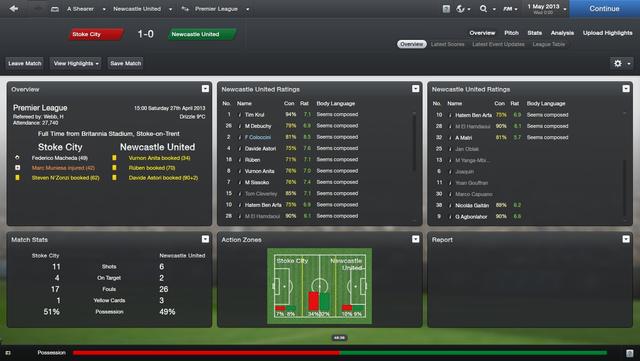 
Newcastle visited The Britannia Stadium where they played second placed Stoke. The only goal of the game came when Stoke striker Federico Macheda got on the end of Andy Wilkinson's cross and turned the ball in with his head. Attendance: 27,740. 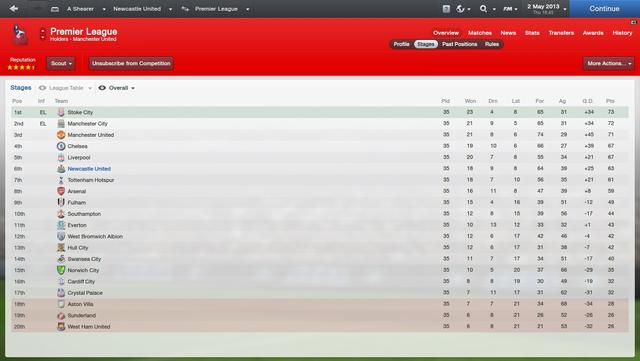 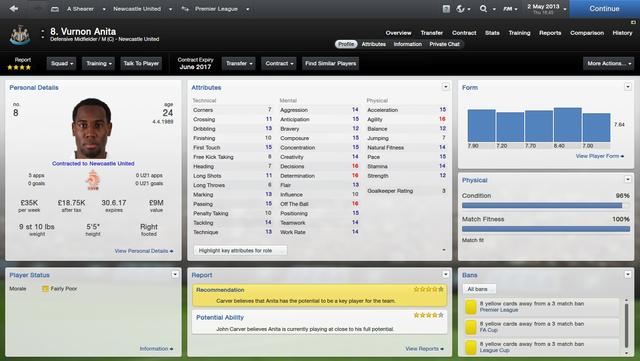 Stocke
9 years
Great transfers (mostly), Agbonlahor was on fire in January and February!
Login to Quote

His forms slipped a bit though