I hope i continue to entertain you

Decent Pre-season For The Magpies'

Newcastle had a good pre-season as they looked to build on last seasons' impressive display. The results will be displayed below. We will also give you an in depth report of Newcastle's Europa League game against Motherwell. 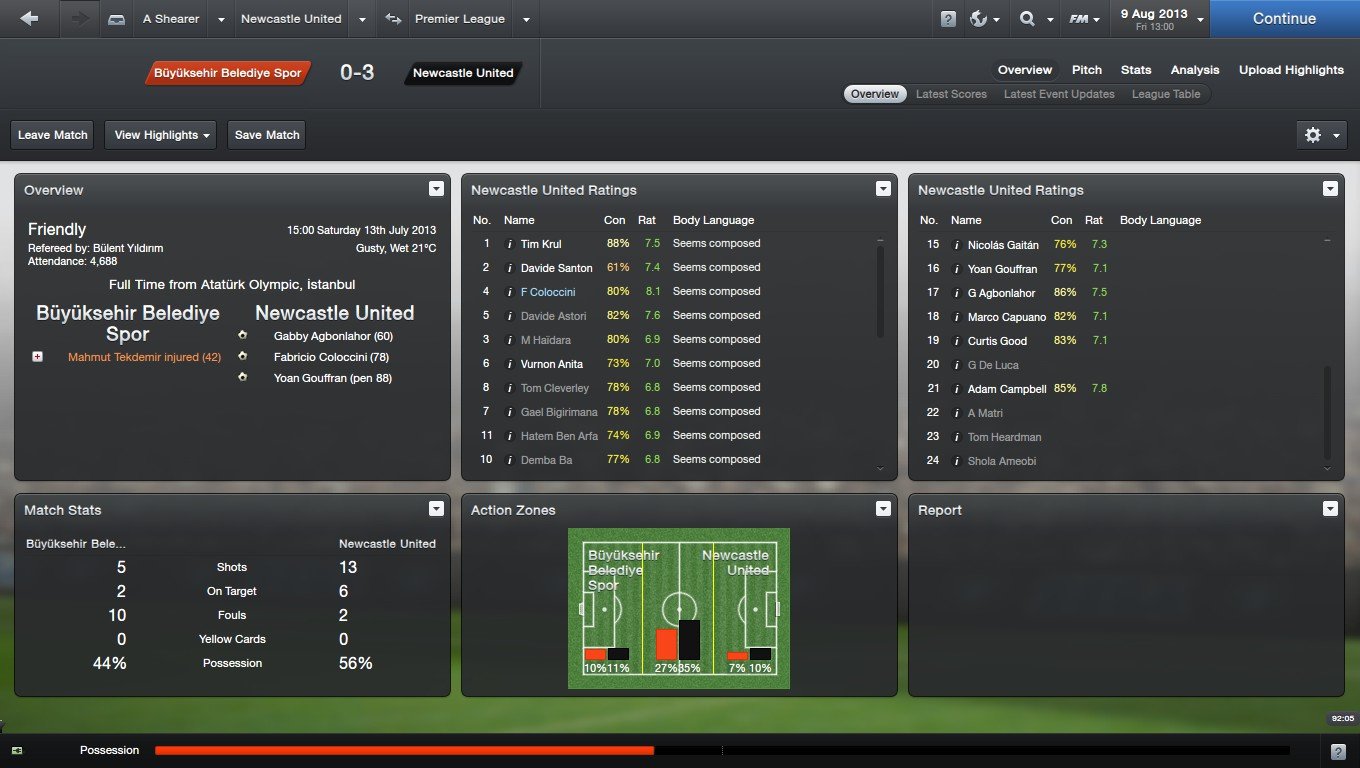 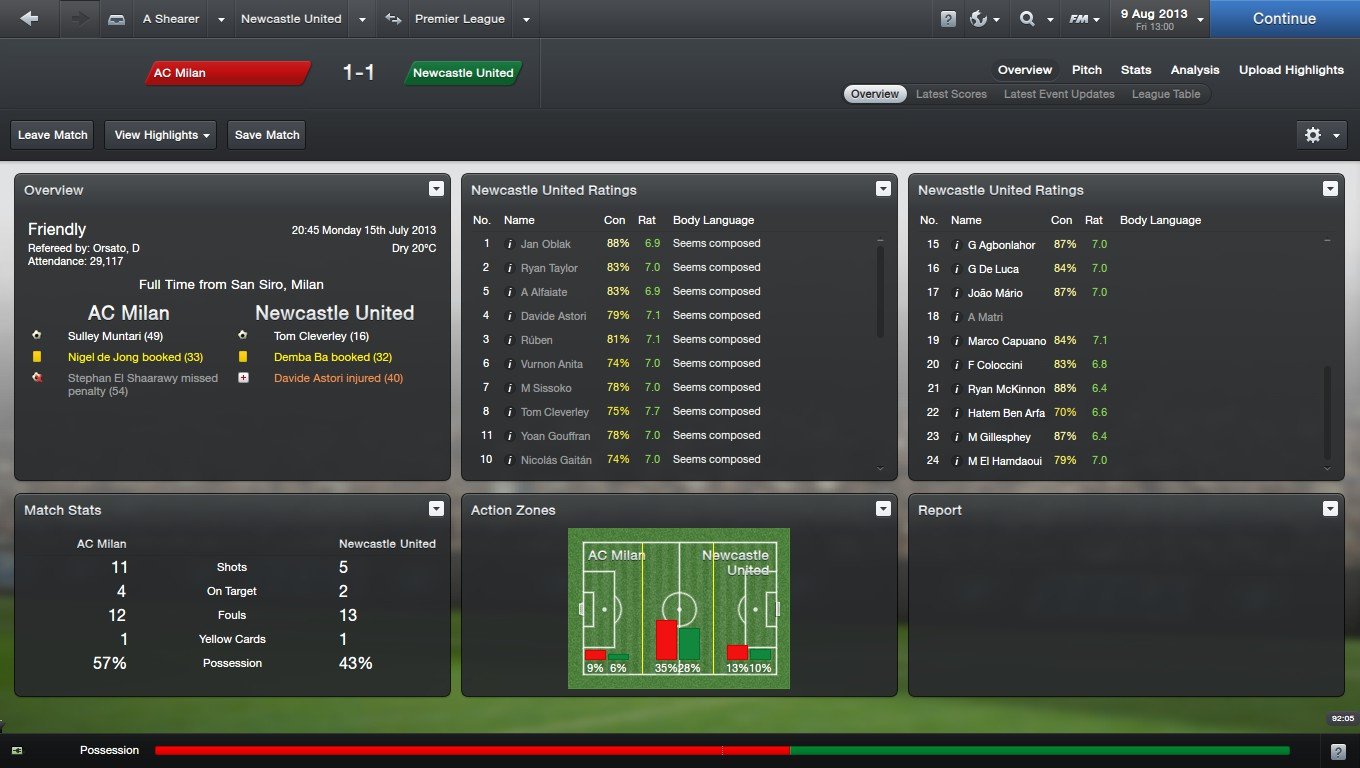 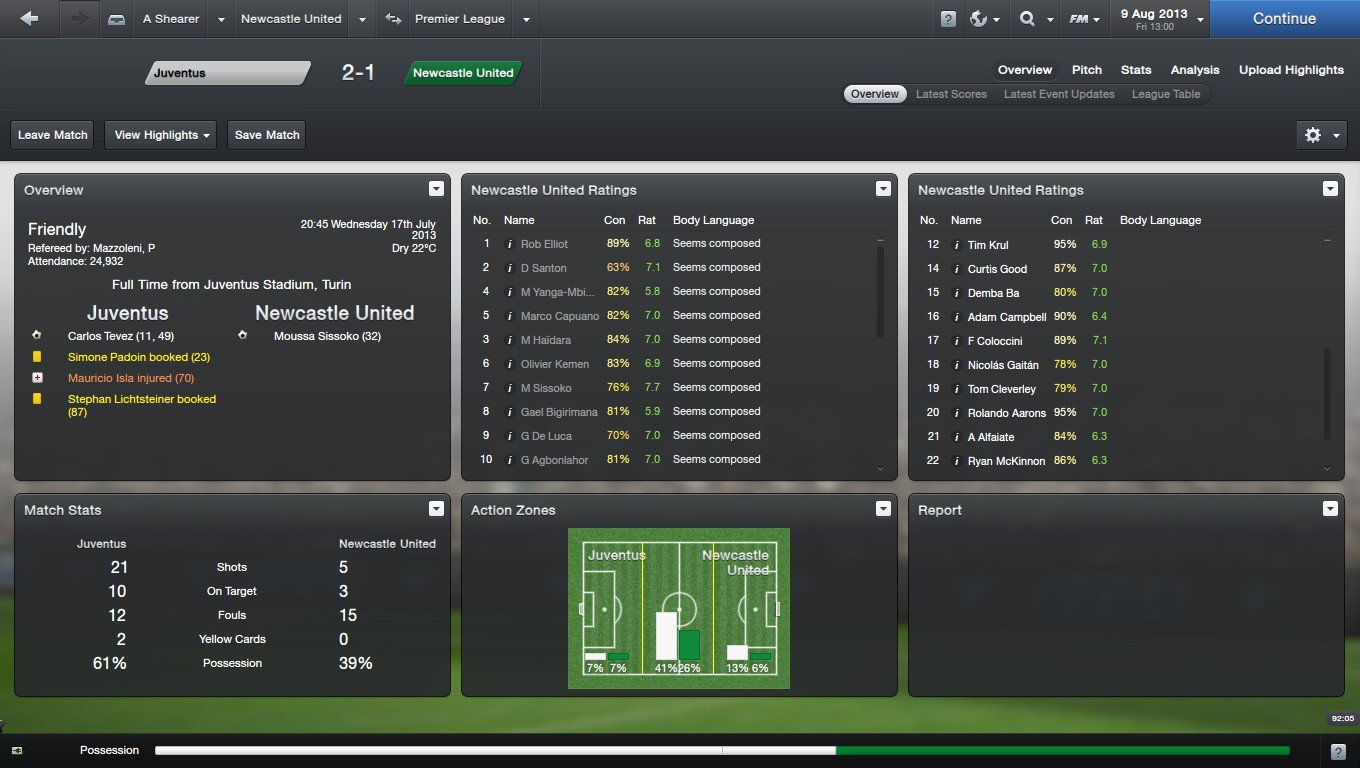 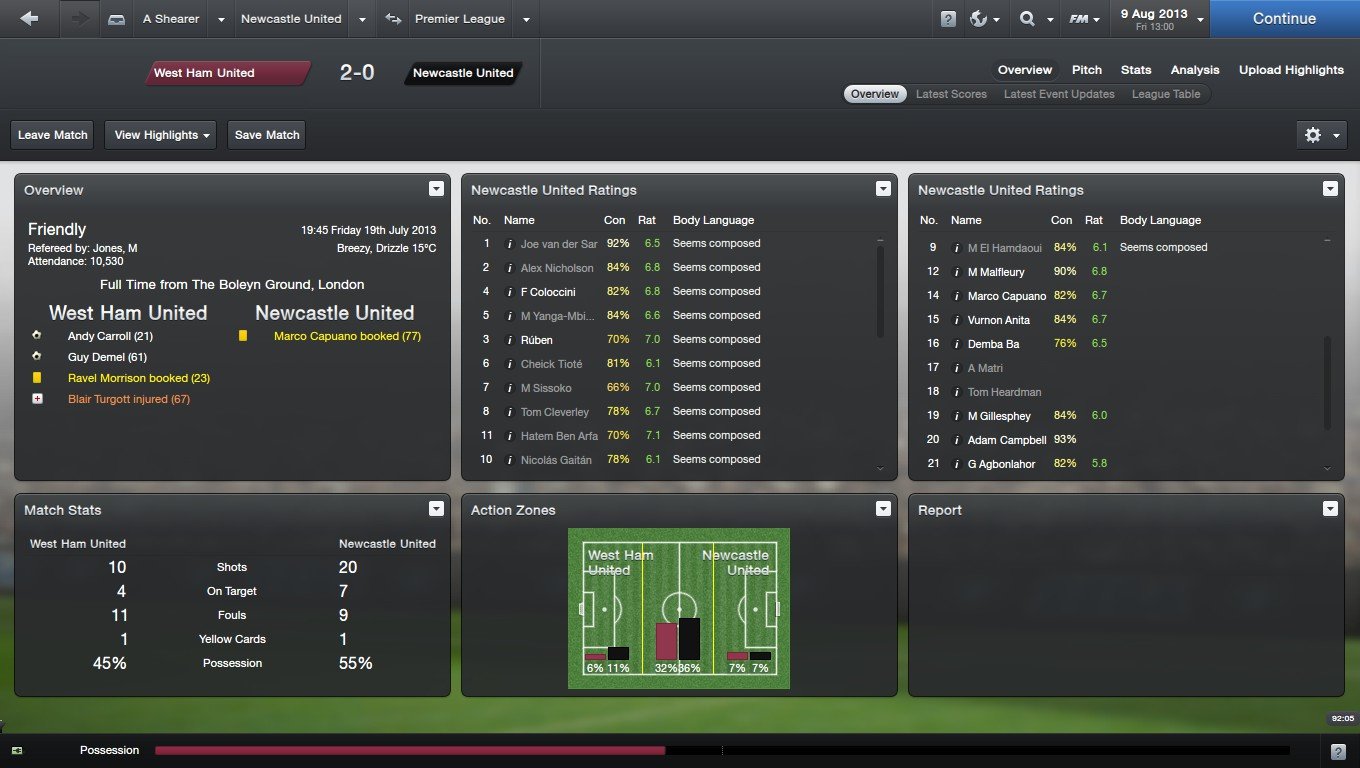 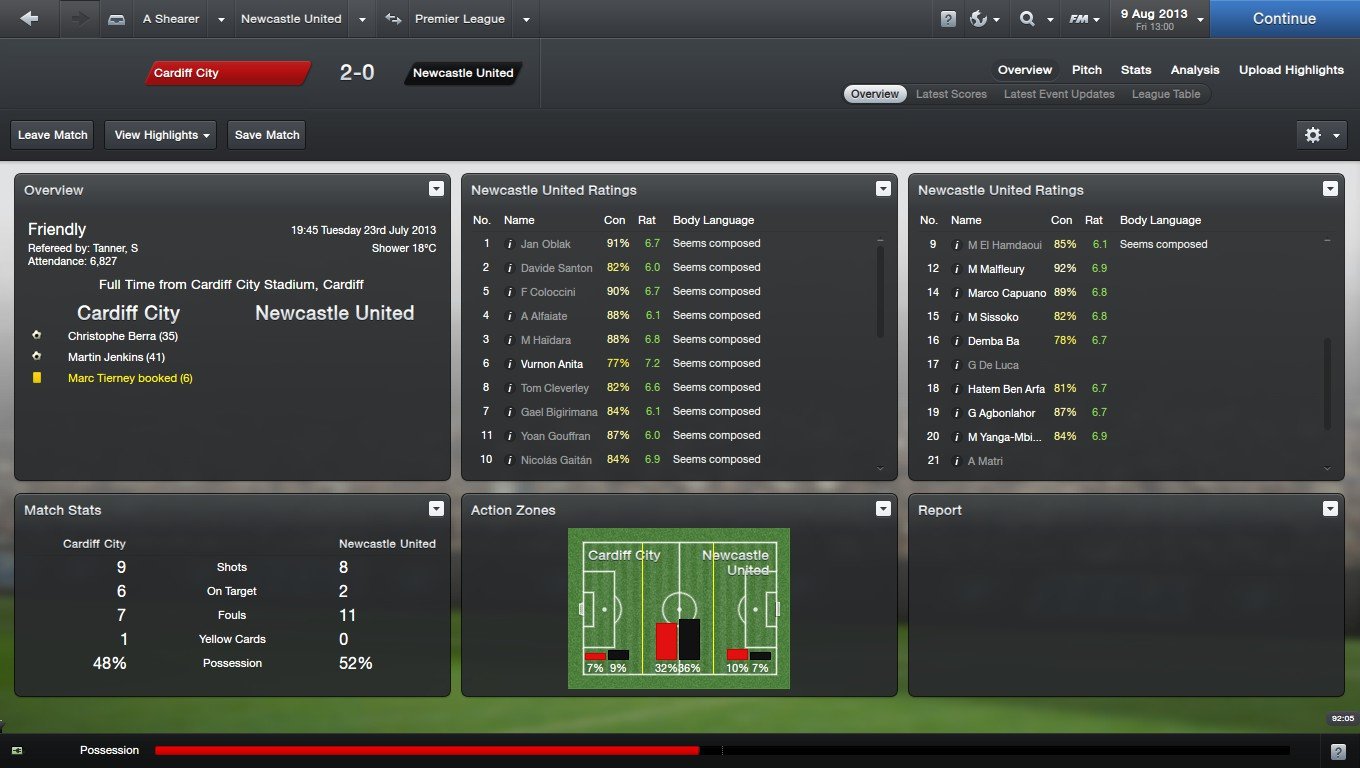 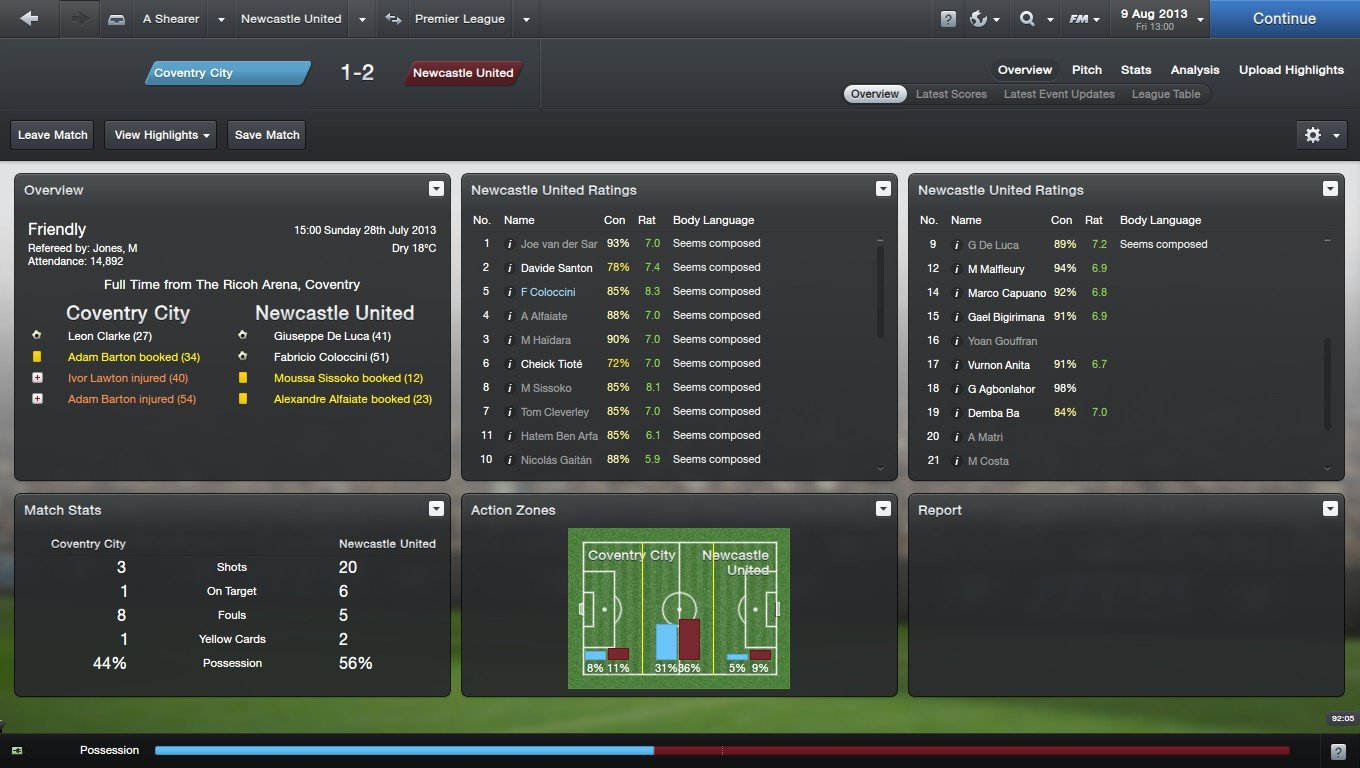 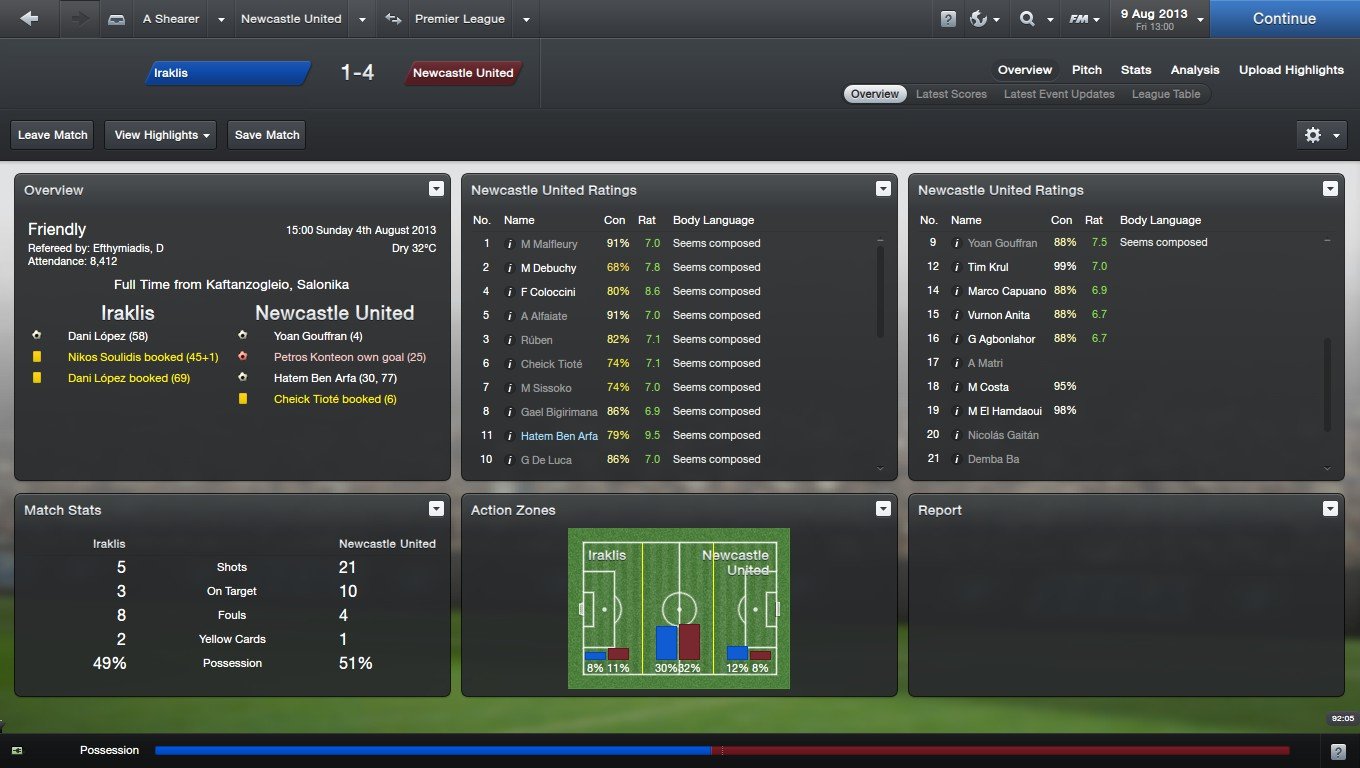 Having had an impressive season last year, Newcastle finished 7th, therefore qualifying for the Europa League. They had been drawn against Motherwell in the 3rd Qualifying Round and made the trip to Scotland for the first leg. 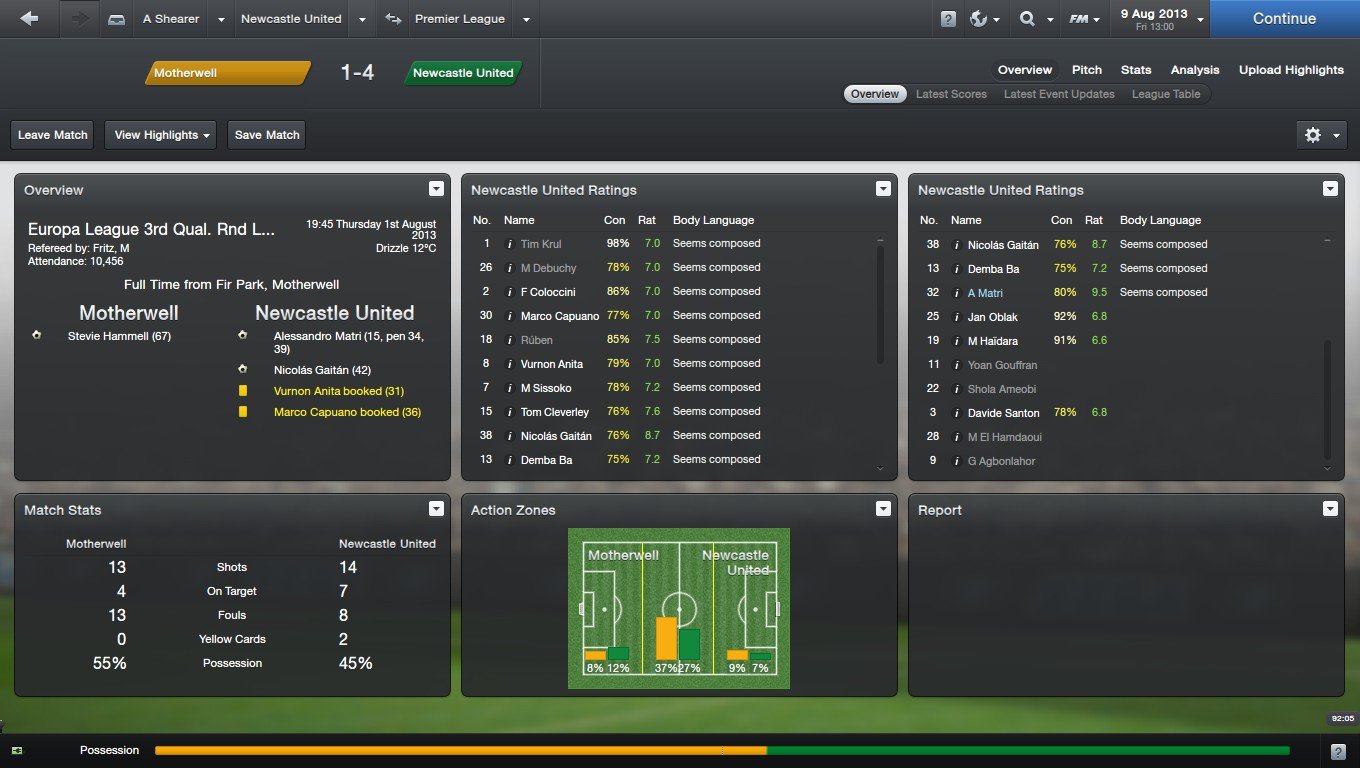 
Newcastle took the lead when Alessandro Matri picked up midfielder Tom Cleverley's fantastic long ball forward. He took it round the keeper, before passing it into the empty net. They doubled their lead when Demba Ba - who was making his first appearance for the club since rejoining them on loan from Chelsea - was fouled in the area by Adam Cummins. Matri stepped up to take the penalty and coolly slotted the ball to the keepers' right. He completed his hat-trick when Nicolás Gaitán played a ball into the path of Matri who fired low and hard to the keepers' left. Gaitán made it 4-0 before half time when Motherwell defender Tom Hateley tackled Matri in the area. The ball went through to Gaitán, who poked it past the keeper. Motherwell pulled one goal back after half time when Daniel Braaten crossed the ball into Stevie Hammell who let the ball bounce before hammering in a scorching half volley past debutant Jan Oblak. This win gave Newcastle a comfortable lead to return to St James's Park with, where they waited to host Motherwell in the return leg. Attendance: 10,456. 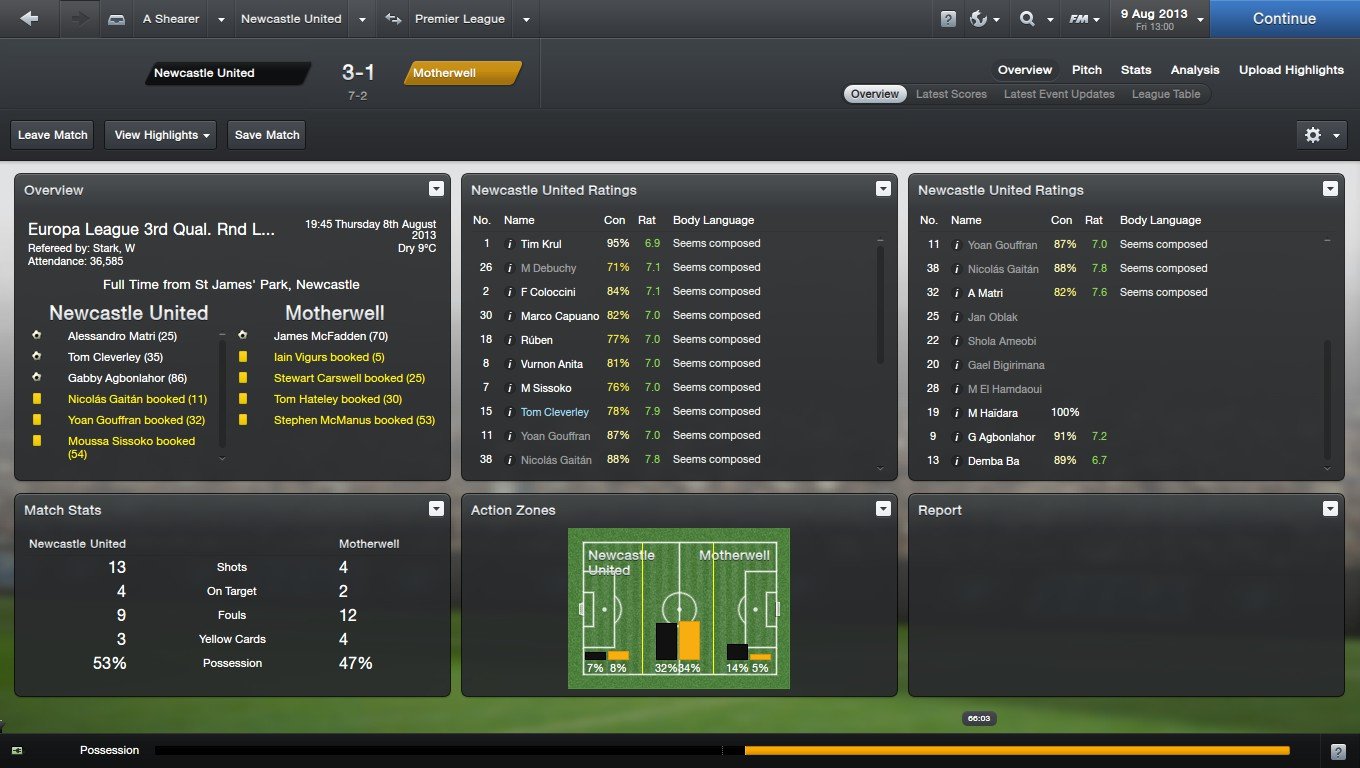 
Having won comfortably in their visit to Scotland, Newcastle were confident going into the second leg at St James's Park. Holding a clear 4-1 lead, they didn't have much reason to worry. Newcastle opened the scoring when first leg hat-trick hero Alessandro Matri headed in Nicolás Gaitán's free-kick. They went 2-0 up when Gaitán's corner found Tom Cleverley, who blasted the ball at the goalkeeper. However the shot was too powerful for the keeper and he could only parry the ball into the net. After the break, Motherwell pulled a goal back when Bob Mchugh chipped a pass into ex-Everton and Birmingham striker James Mcfadden who took a touch to bring the ball away from the goalkeeper before passing the ball into the open goal. Newcastle got the last goal of the tie when substitute Gabby Agbonlahor picked up Moussa Sissoko's through ball and slotted the ball through the keepers' legs. The score on aggregate was 7-2 to Newcastle which will leave them feeling very confident going into the new season with their first match against Liverpool. The draw for the next round has been made and Newcastle will play Legia Warszawa in the Europa League playoff with the first leg being held at Newcastle.
Attendance: 36,585.

The Player Of The Pre-season goes to Alessandro Matri who scored the crucial goals in the 7-2 aggregate win over Motherwell. In total, he scored four goals for Newcastle. 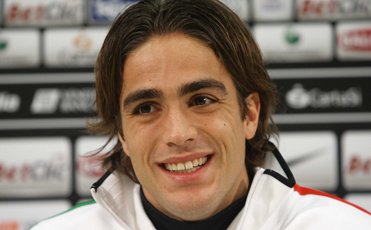 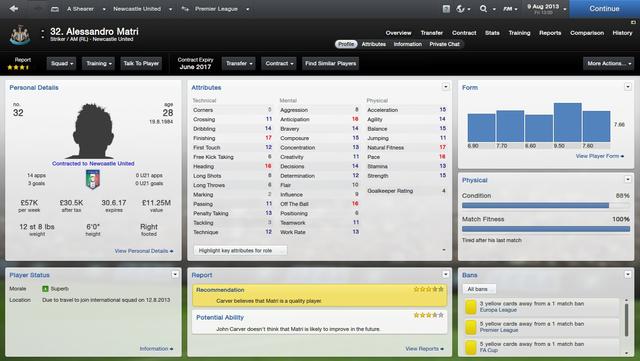 The Young Player Of The Pre-season goes to Tom Cleverley who played very well in the important games against Motherwell. He also scored scored two and set up one. 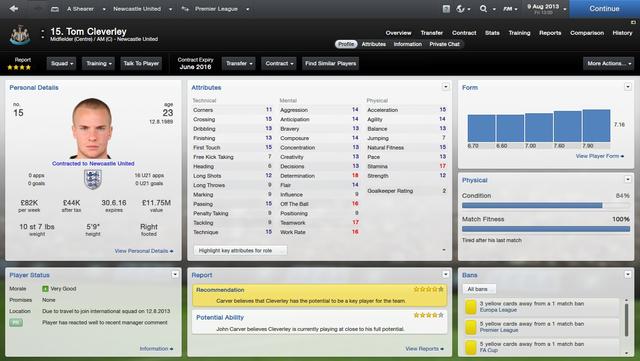 edu1878
9 years
Nice pre season. Hope it has set you up well for the season ahead.
Login to Quote

Newcastle kicked off their new Premier League campaign this month with two games being played against Liverpool and last years shock runners-up Stoke. They also played in the Europa League Playoff, having beaten Motherwell in the 3rd Qualifying Round. Results below. 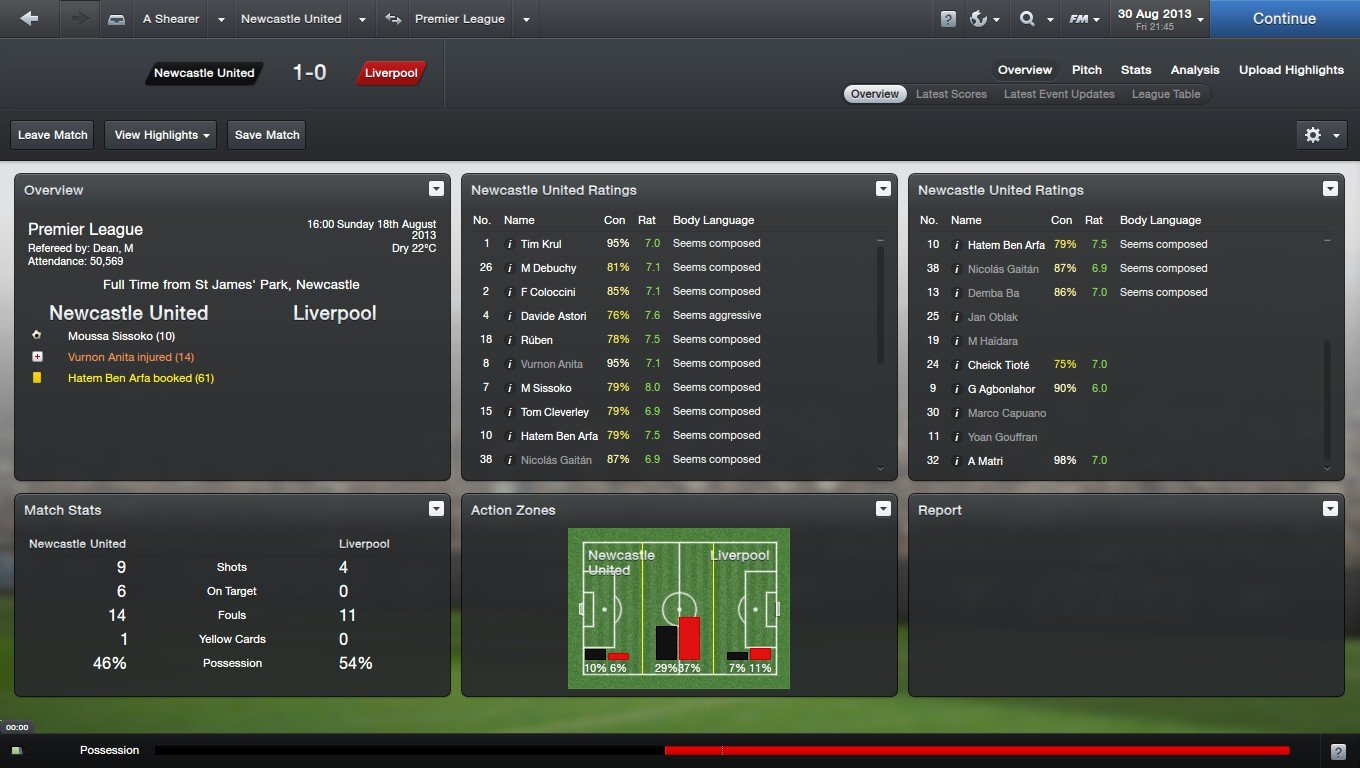 
Newcastle kicked off their season off the back of some confident performances against Motherwell. They hosted Liverpool in their first game of the season and played well, creating nine shooting opportunities in all. Liverpool controlled possession for most of the first half but Newcastle took the lead when Moussa Sissoko blasted in a volley from Hatem Ben Arfa's cross. The game finished 1-0 after a range of chances from both sides. Attendance: 50,569. 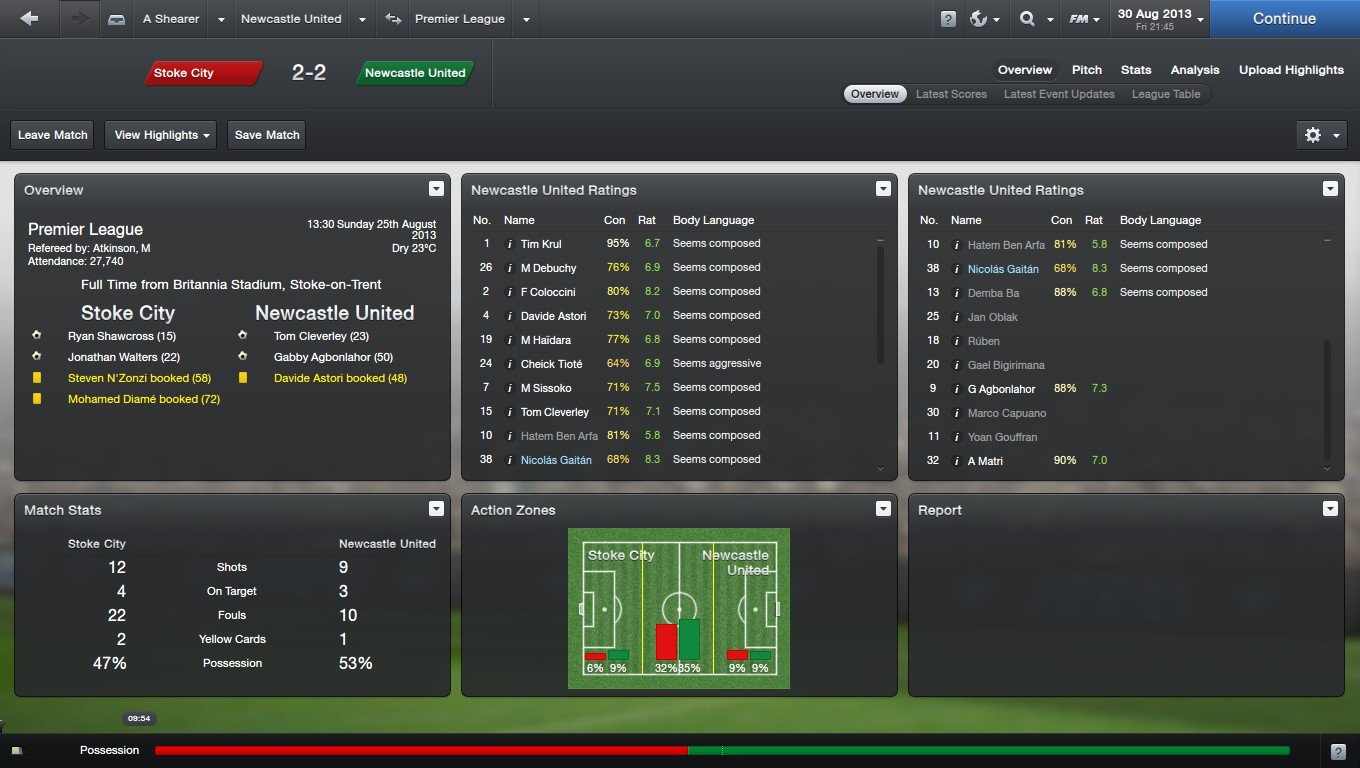 
Newcastle traveled to The Britannia Stadium to play last years runners-up Stoke City. Stoke took the lead when a goalmouth scramble resulted in the ball being poked in by Ryan Shawcross. They were 2-0 up seven minutes later when Jonathan Walters intercepted Mathieu Debuchy's poor back pass and had the whole goal to aim at and passed it into the net. Minutes later, Newcastle pulled one back when midfielder Tom Cleverley chested in Nicolás Gaitán's cross. After half time, substitute Gabby Agbonlahor equalized for Newcastle when Tom Cleverley flicked a ball on to him before he fired past the oncoming keeper. Attendance: 27,740. 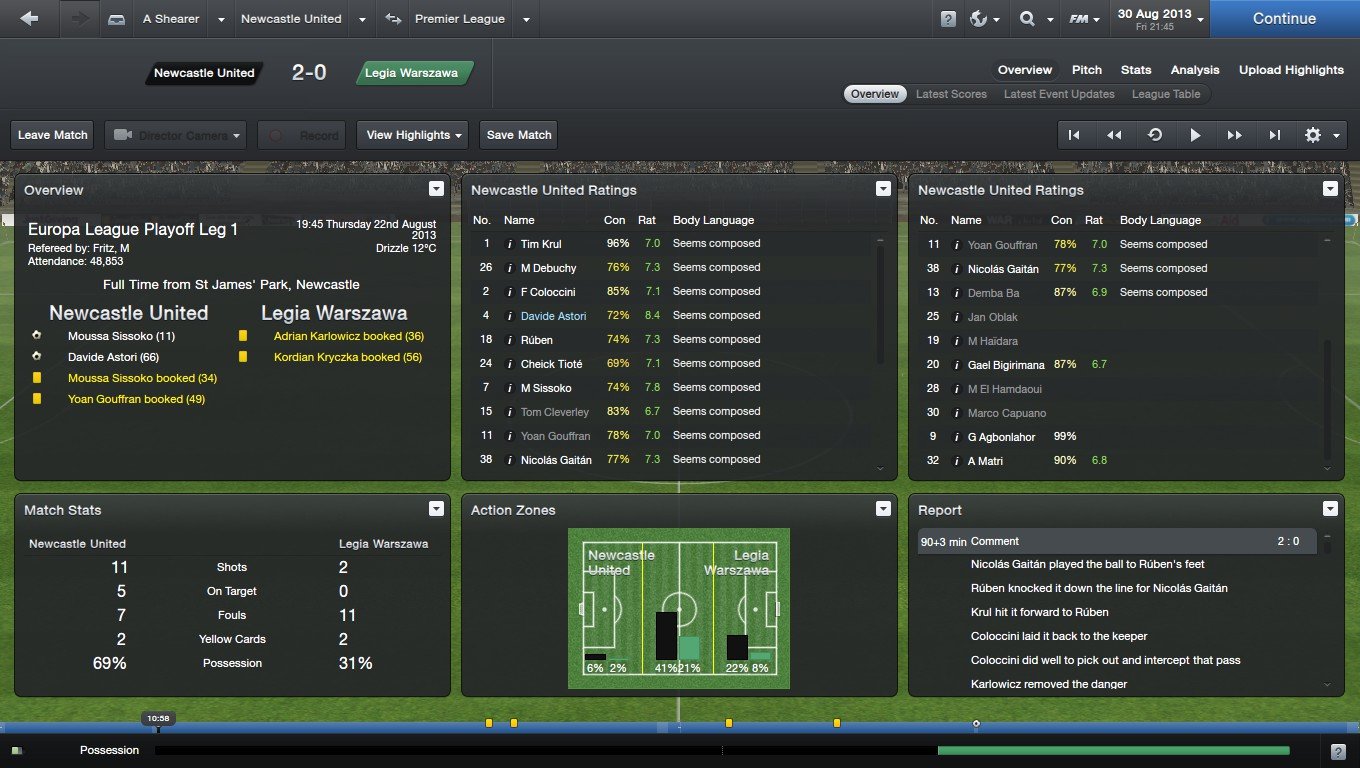 
Having beaten Motherwell in the previous round by an impressive aggregate score of 7-2, Newcastle hosted Polish side Legia Warszawa in the first leg of the Europa League Playoff. Newcastle took the lead when Demba Ba back-heeled Yoan Gouffran's cross into the path of Moussa Sissoko who fired the ball past the keeper. They made their lead more comfortable when Davide Astori touched down Nicolás Gaitán's corner and tapped the ball past the keeper. This 2-0 victory looked to give Newcastle confidence before they traveled to Poland. Attendance: 48,853. 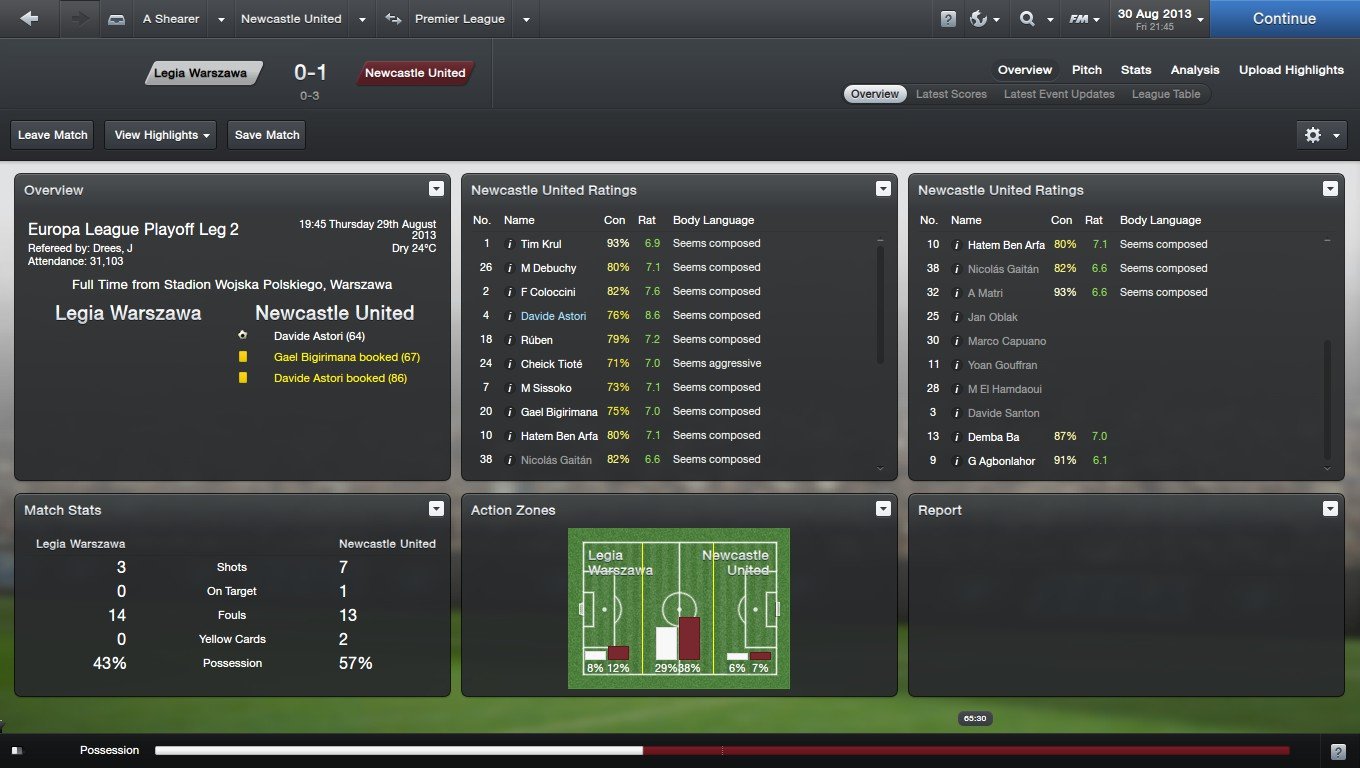 
Having earned a comfortable 2-0 win over Legia Warszawa at home, Newcastle visited Poland for the second leg. Newcastle got the only goal of the game when Davide Astori headed in Hatem Ben Arfa's cross which midfielder Tomasz Jedryas attempted to clear off the line but couldn't get enough on it. This meant that Newcastle would go through to the Group Stage. Attendance: 31,103. 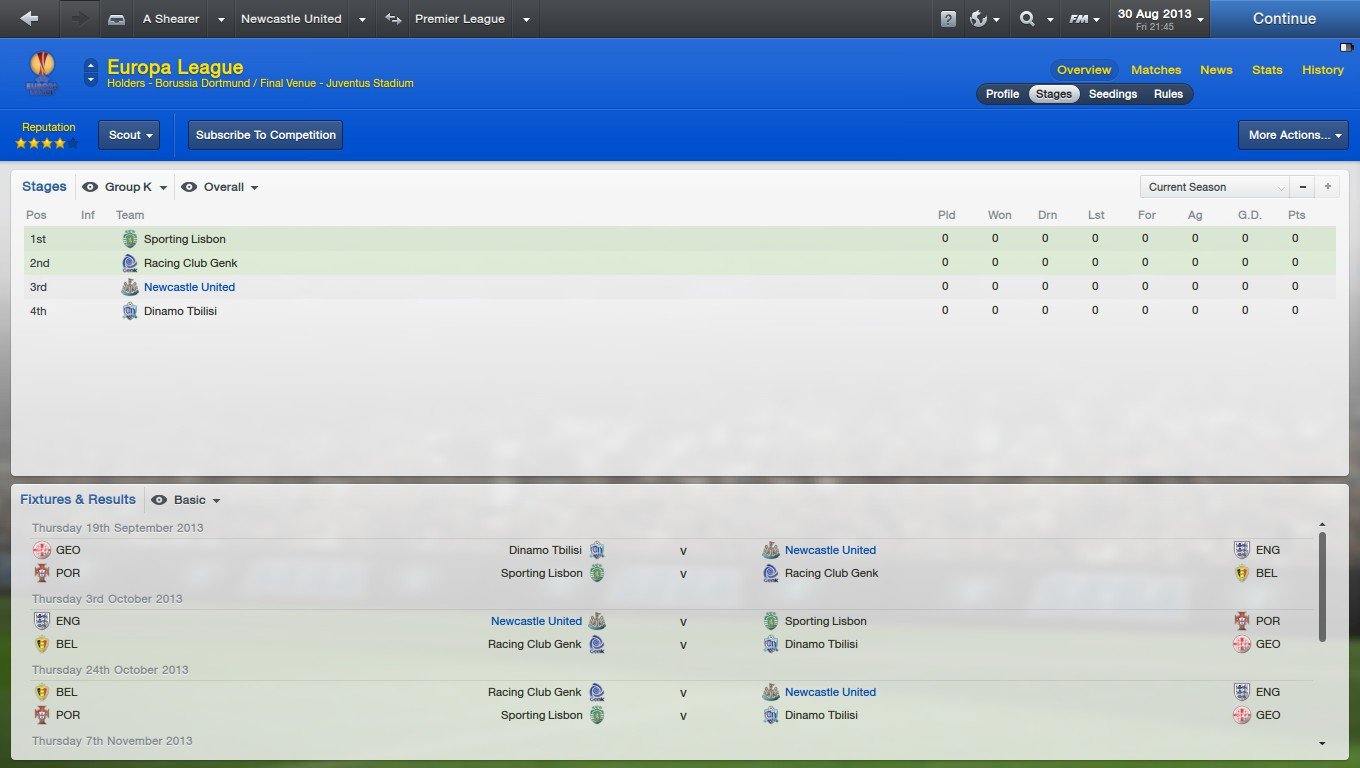 Newcastle were drawn in a group alongside fallen Portuguese giants Sporting Lisbon, Belgian side Racing Club Genk and Georgian minnows Dinamo Tbilisi, with their first game away to the Georgians.

The Player Of The Month award goes to center back Davide Astori, who scored twice in the tie against Legia Warszawa. He also put in some great defensive displays against the Poles and against Stoke City. 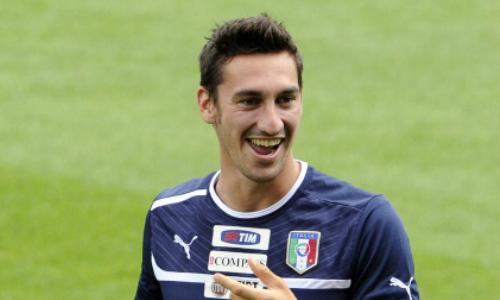 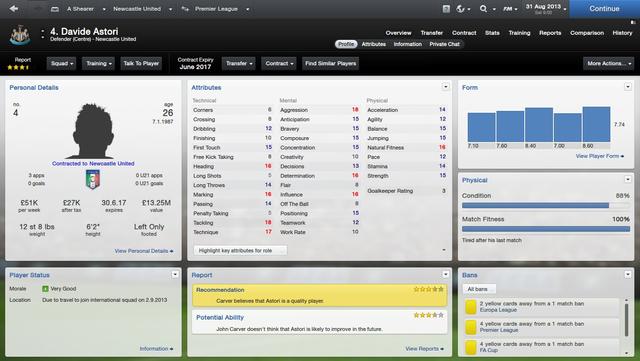 The Young Player Of The Month award goes to Tom Cleverley, who turned 24 this month. He scored twice and set up one as his impressive Newcastle career continued. 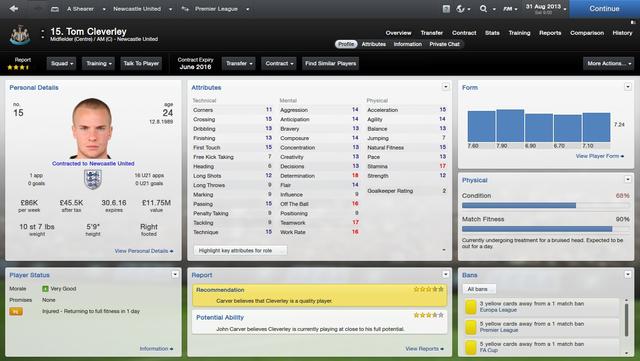 Just like last season, I - Mark Viduka - am back with my view on the transfer business that has been going on at St James's Park. 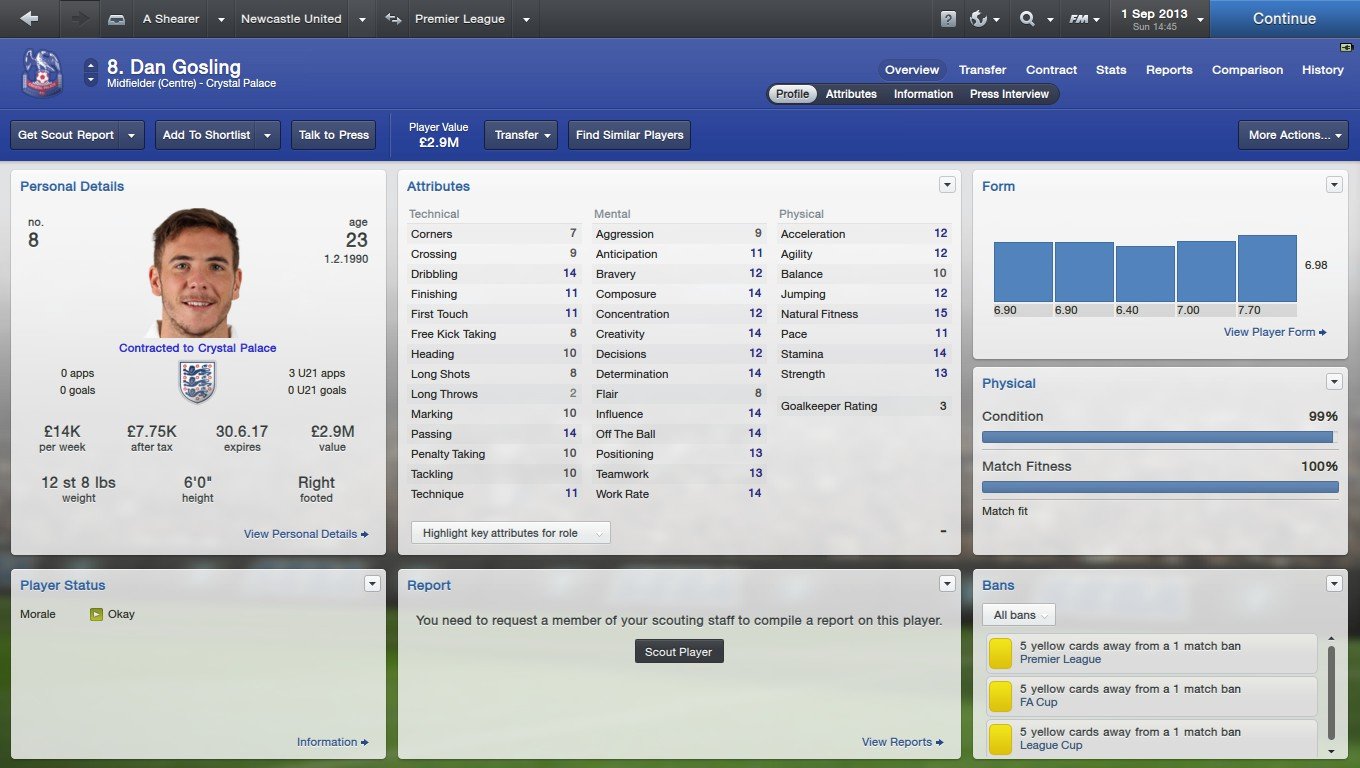 Demba Ba returns to Newcastle on a season-long loan worth £1.2 million. 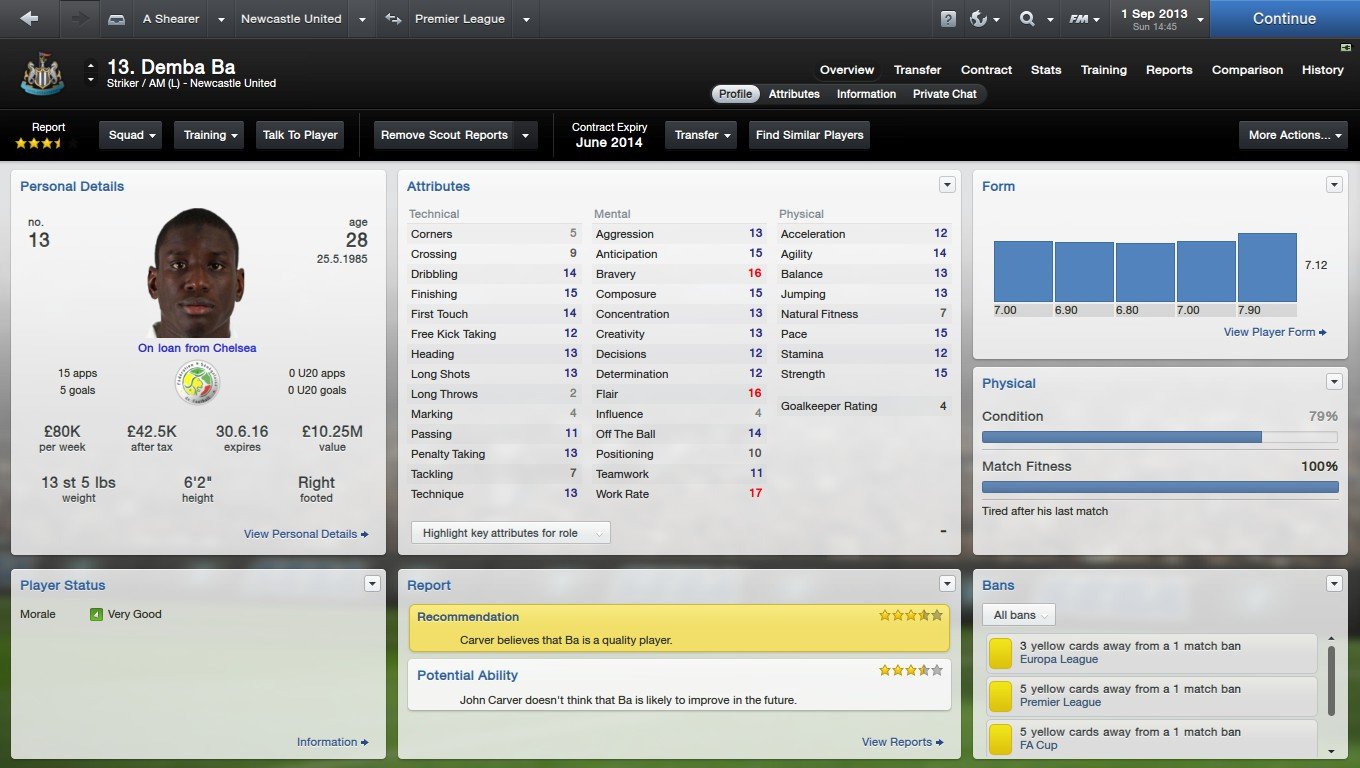 Viduka: A real fan favorite returns and should have the Toon singing in no time. Even if he doesn't play amazingly, he will still manage to lift the fans.
Rating: 8/10


Roland Bogaerts, 16, joins on a free transfer but Newcastle will have to pay £650k in compensation for him. 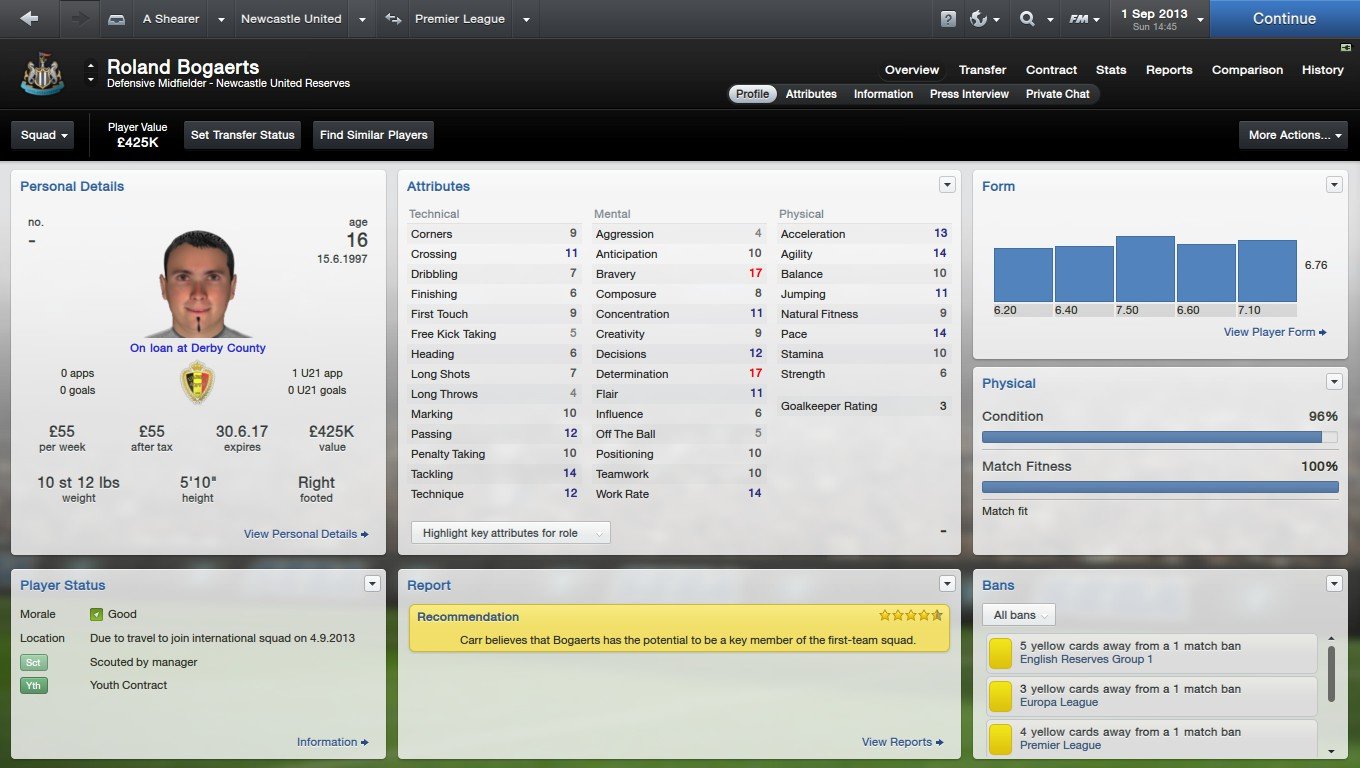 Viduka: If trained the right way, Bogaerts could turn out ti be the worlds' next football superstar. He has currently been loaned out to Derby for some match experience which will surely help his career develop. Newcastle saw off competition from English champions Manchester City to secure his signature. A bargain buy.
Rating: 9/10 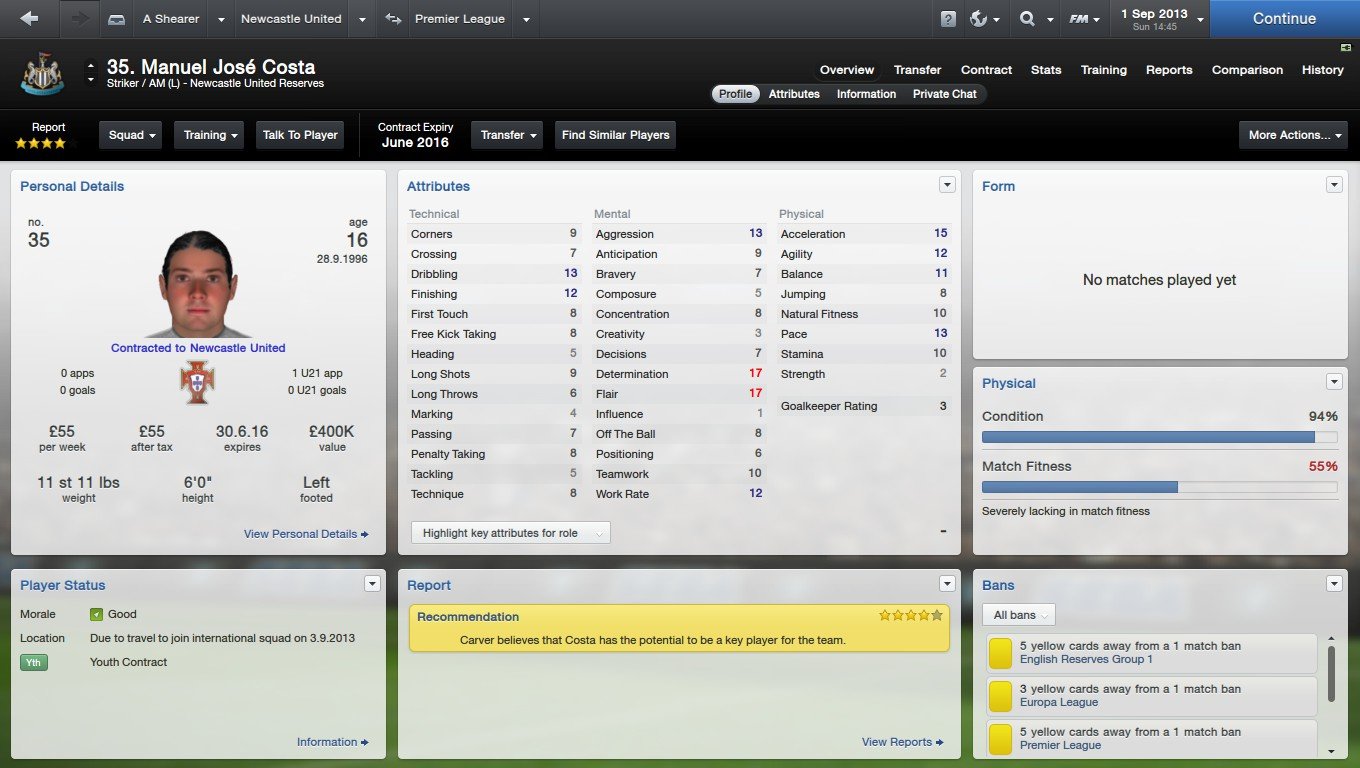 This lad also has real potential and again is a bargain. He joins up with a squad with some Portuguese youngsters in already, but he looks the most promising of the bunch, having made one U-21 cap for Portugal at the age of 16.
Rating: 8/10 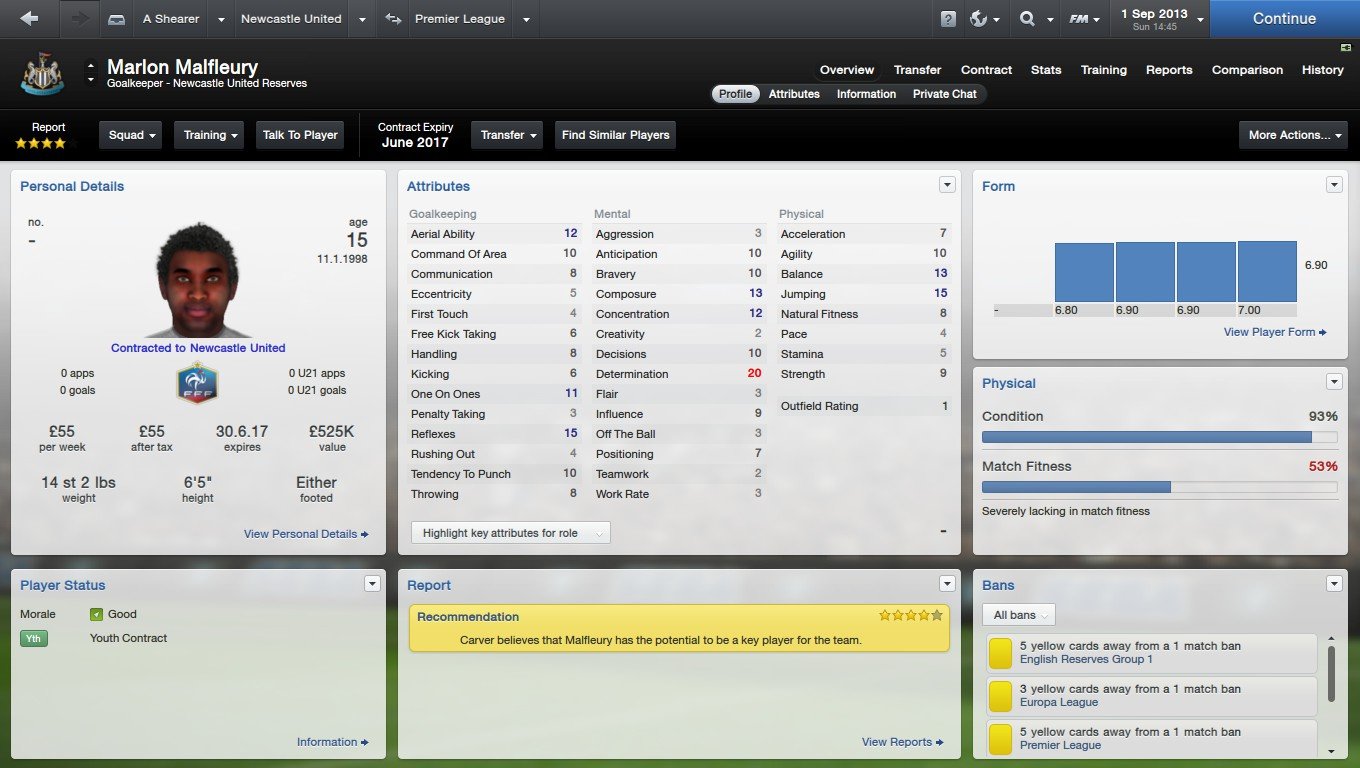 Viduka: Another goalkeeper with a lot of talent joins young goalkeeper Joe van der Sar in a battle for a place in the squad in the future. He looks very determined which will only help his career.
Rating: 7/10


Marco Lucas, better known as Marco, another 16 year old. However, Newcastle paid £1 million for him. 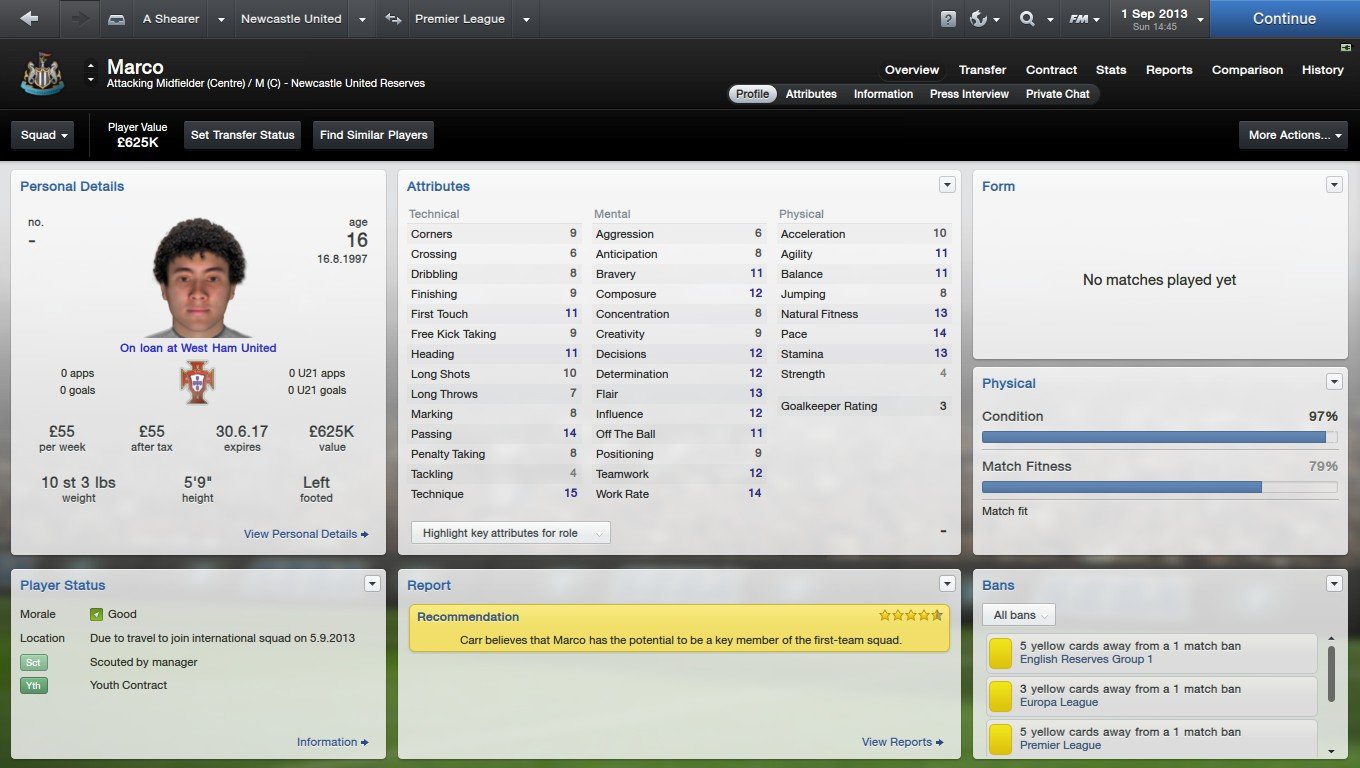 Viduka: For £1 million, this guy looks to be one of the biggest bargains this season. He looks like he has the most potential out of the other young signings and has already been loaned out to Npower Championship side West Ham.
Rating: 9/10


Dimitri Payet, 26, joins on loan from Marseille as a backup to the other wingers. 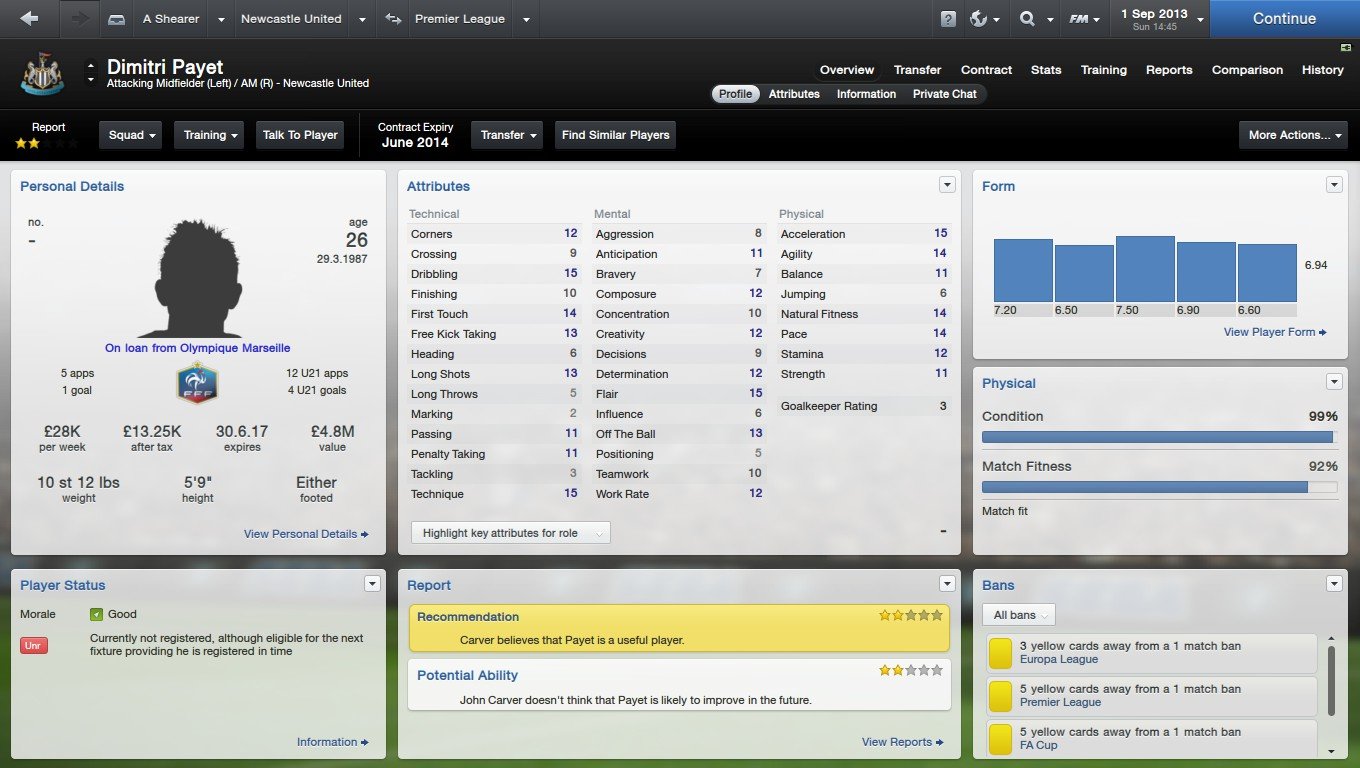 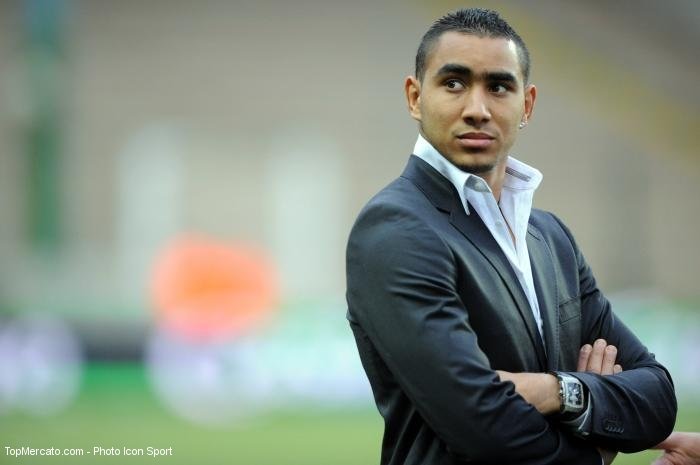 Viduka: As a backup winger, he could do a good job. However with the amount of players in the squad that can play as wingers already, his chances seem limited.
Rating: 6/10
Login to Quote

HamoudiLFC
9 years
Hmm, what a group! You can get past Genk and Tbilisi for sure, and steal a few points of Sporting, good luck!
Login to Quote