Jer
9 years
Great to see you back and with a great piece of a story. Good luck!
Login to Quote

Akash
9 years
Two more players joined us before the start of the season, and will make up the numbers. The reason the team needs more players is the injuries we've suffered during the pre-season. Although none of our key players and new signings have been injured, the youth and reserve squads have seen multiple injuries, and that too long-term. 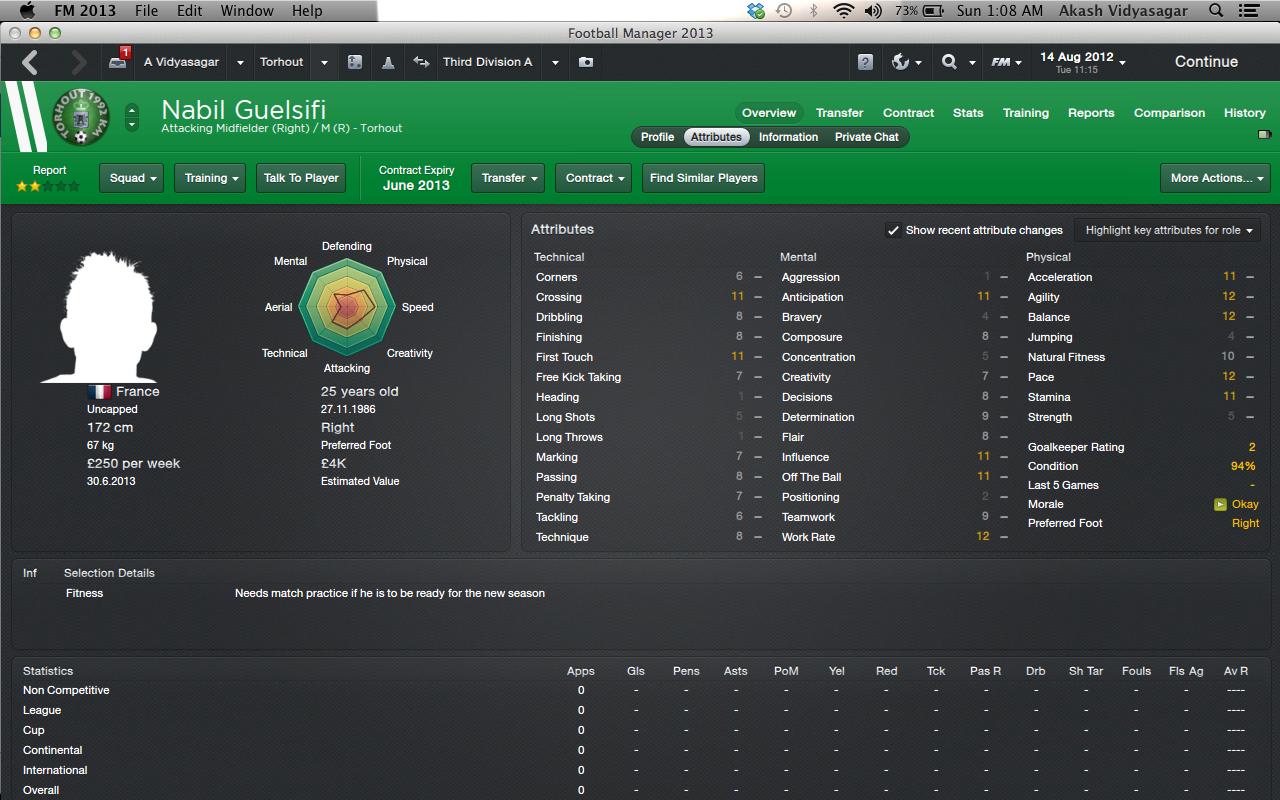 - Nabil, the Frenchman, will be backup for our right-midfielder, who is injury-prone, according to my coaches. 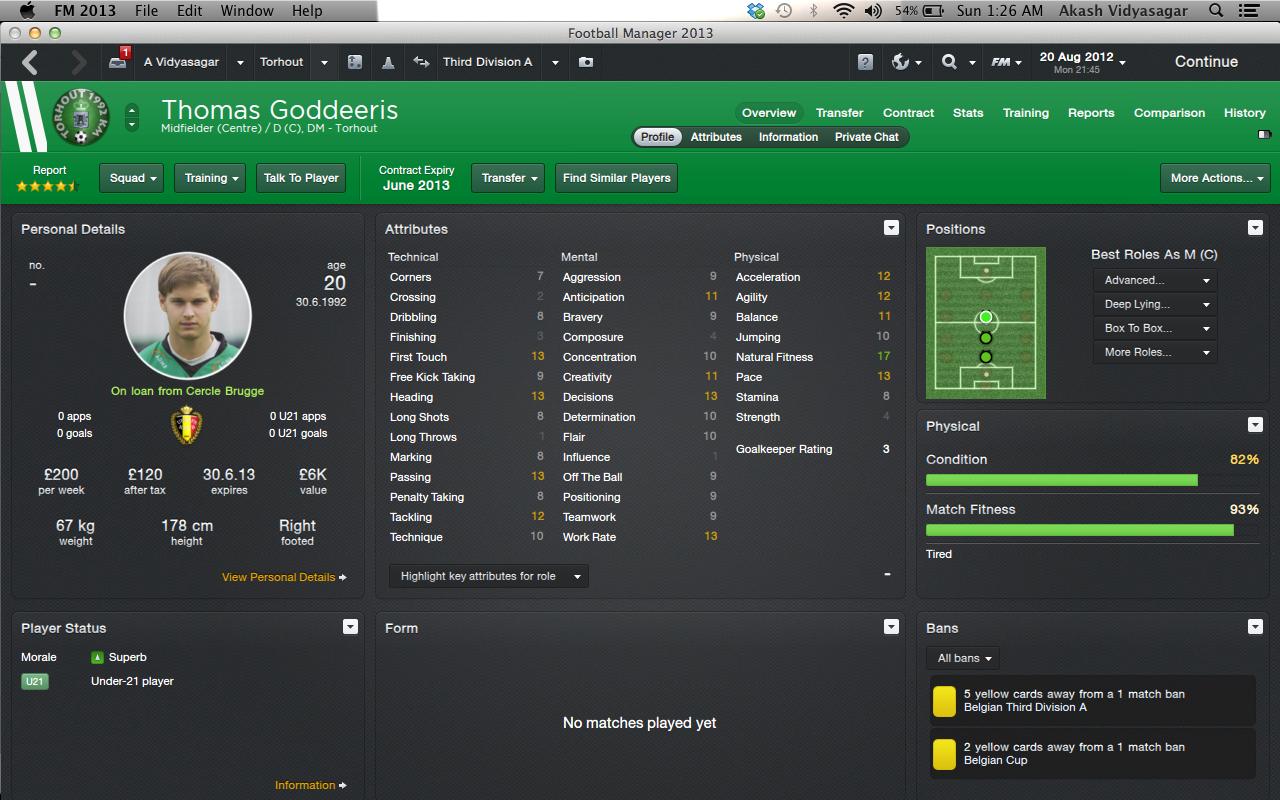 - Goddeeris is actually a great, young player, which is probably why I wasn't able to sign him. By the end of the season, I will hopefully get him full-time.

Now, with the signings done, it was time to look forward to our season, and the fans were ready too.

Cup Exit and a Start

Dear readers, members of the cubs and fans,
As you know, I joined your beloved club 'Torhout 1992 KM' two months ago, and I will be using this medium to interact with the club's fans. More often than not, words get twisted in press conferences, as I've noticed with some of the biggest managers in the world. So, to avoid that, and create a direct connection with the club's fans, I bought this space in the local newspaper. On the first day of every month, you should expect an article here. I'm sure you fans were sceptical when you heard the club would be hiring an unexperienced manager from a random country to lead your team, but the support you have provided - coming to fill the stands, chanting for the old players and new. Both, the players and me, will be learning from this experience, and each and every one of those players wants to get Torhout up the ranks of Belgian and World Football.

We began August, while our signings still weren't finished, with the Belgian Cup. We started in the Third Round, but our objective was to go as far as we could go. Facing non-league team, Spa, was the best preparation to the season for our players, followed by a close game against Olsa Brakel was met with a lot of appreciation. Unfortunately, we were outplayed and outclassed by Second Division, Dessel. The income the cup run generated and the exposure are boys got is immense. 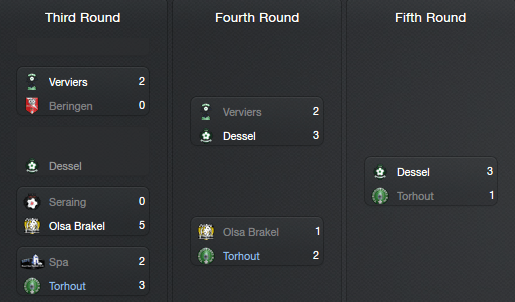 The rest of the month of August wasn't too bad, with a loss and a victory in the league, finishing up in 14th.

However, the month ended on a really bad note, with our first-team striker, Niels Martin, breaking his leg during the match against Deinze. I hope your wishes are with Niels, and rest assured, our physios are going to help his recovery every step of the way.

Until next month, this is 'The Manager', Akash Vidyasagar.
Login to Quote

Dear Torhout fans,
With the cup competition out of the way, the club was in the right place to do well in the league. Unfortunately, the loss of Niels Martin really hurt the club. The replacement strikers, Yde & Ternest, are still gelling with the club and we weren't expecting immediate fireworks.

Even though we could grab only 2 points out of a possible 15, the fans have stuck by us, and I would like to thank them for their support. Things are rough, but the team is prepared to work through this patch, for themselves and, more importantly, the fans. I've been assured by our board of directors that my job is safe for now, and that adds to the stability required for the team to move on from this month to the next. 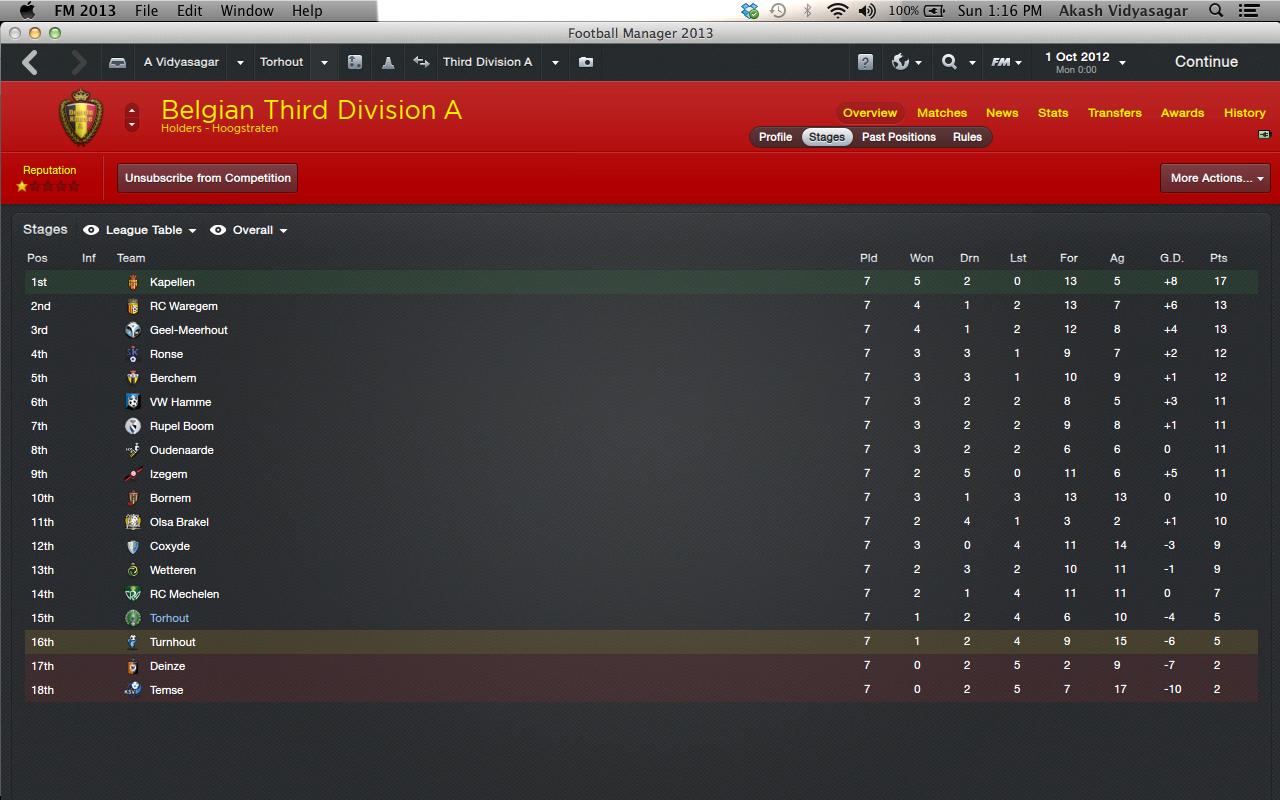 Until next time, Akash Vidyasagar.
Login to Quote

Great start and so very simple yet effective! Keep it going
Login to Quote

Hello, Torhout fans.
I've heard the chant you have made for me, and I love it, and it is true. Pep Guardiola has nothing on me. October was a great month for our team, winning two games and rising up the league table slowly but surely. The assistant manager made a very good observation the other day. I have started calling Torhout 'our team' or 'our club', which means I have now become a part of this club. October's victories were against teams that were just above or below us, so they made it that much more enjoyable to us in the dugout.

For those enquiring about the condition of the pitch, I would like to clear something up. We have made the pitch narrower because the area near the sidelines to avoid injuries. November will be a really tough month, with a match against the league leaders, but the future looks bright for Torhout.

Glenn T
9 years
Brilliant, an Akash story. I will of course be following, like every wonderfully-written-but-unfortunately-never-completed story you have written here on the site.

TVDLC123
9 years
Great updates, will definitely be following this!
Login to Quote

Merry Christmas and Happy New Year, Torhout fans. Hope to see you and your family on our "Yde's Celebration" on 5th January. The special guest and his teammates are expecting the team's loyal fans to join in the celebration. For those who don't know, Yde has now made the most league appearances for Torhout history. His performances are just as good as when he joined the club 7 years ago.

For those who are wondering why there was no column in the 1st December edition of the newspaper, the reason was simple - we were busy playing against Coxyde. With most of the boys wanting to stay late in practice and get an extra couple of drills in, there was no time for an article. The months of November and December were exciting to say the least. Late goals, red cards and goal-line clearances - the last seven games had them all. In the end, 15 points out of a possible 21, one loss being against the runaway league leaders, I guess we can call that successful.

And a great rise up the league table doesn't hurt either. 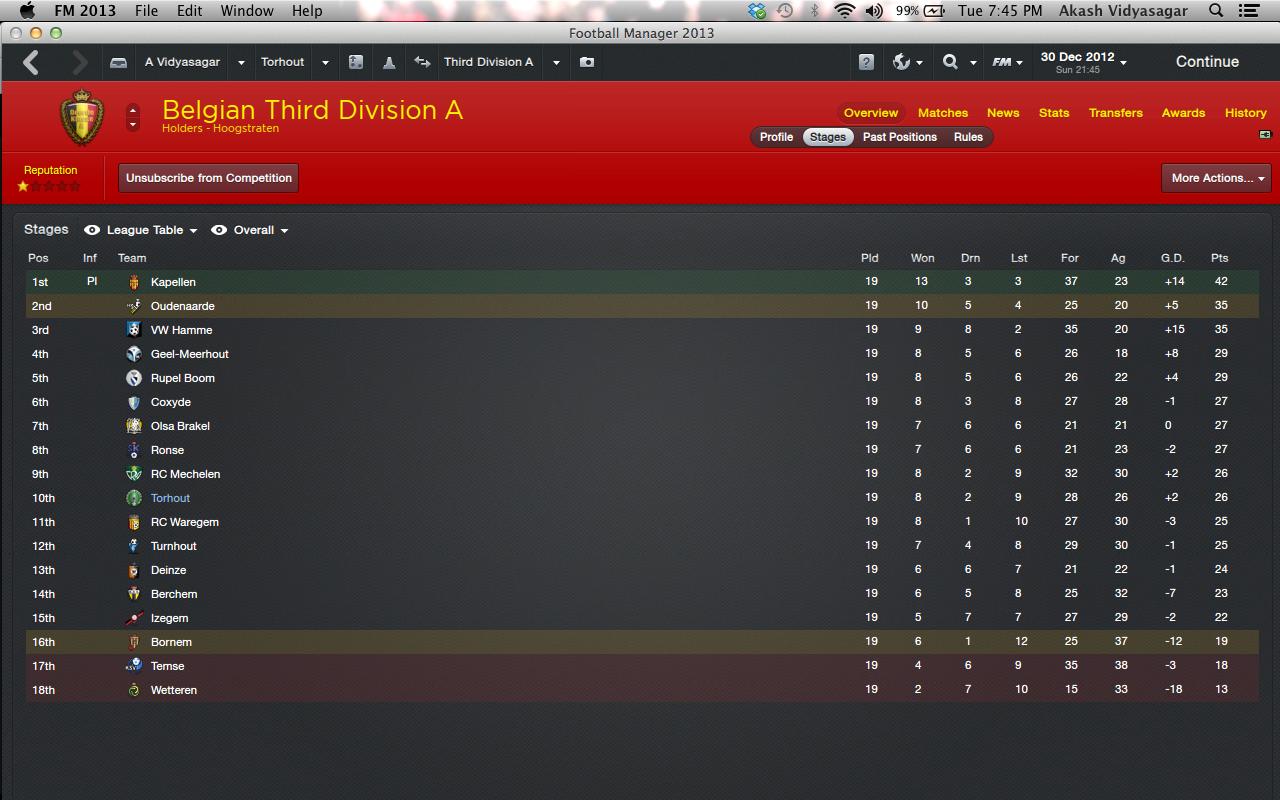 We have added a member into our ranks as American Devann Yao has joined training just today. We signed him on a free transfer from Boussu, but will only feature when his knee injury is completely taken care of. Lots of exciting things are expected of Yao; he is surely a player to watch out for. 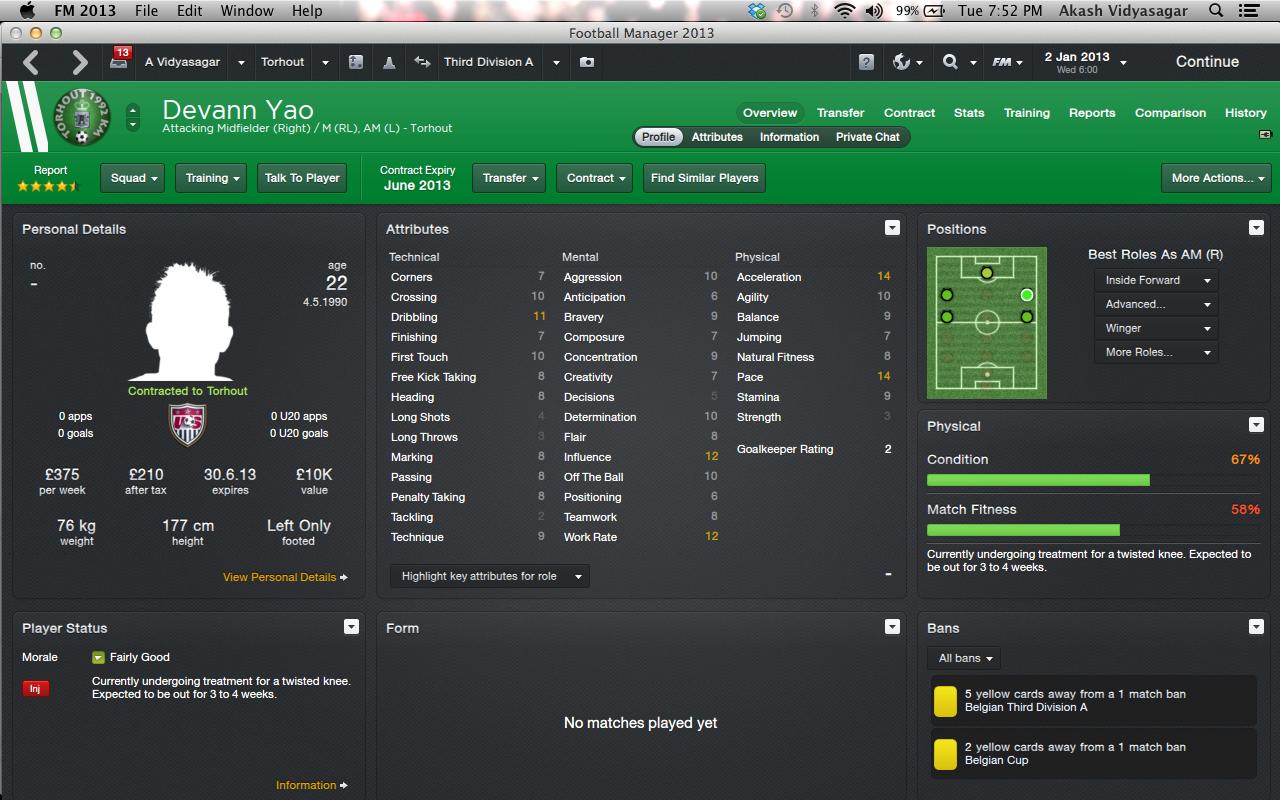